[Our last full day in the Lands Down Under awoke with the promise of more beautiful weather . . . ]

[So, we decided to do what all Aucklanders and tourists do in such situations . . . ]

[Hop a ferry to Waiheke Island!] 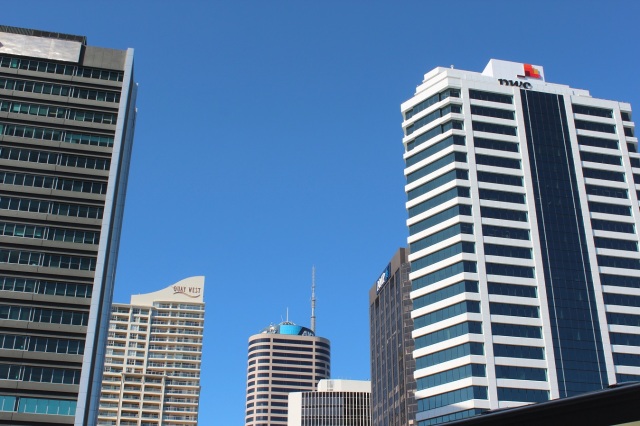 [Still early morning and I’m already wondering if 1,000,000 SPF sunscreen is going to ward off any bleaching effects of the sun today?] 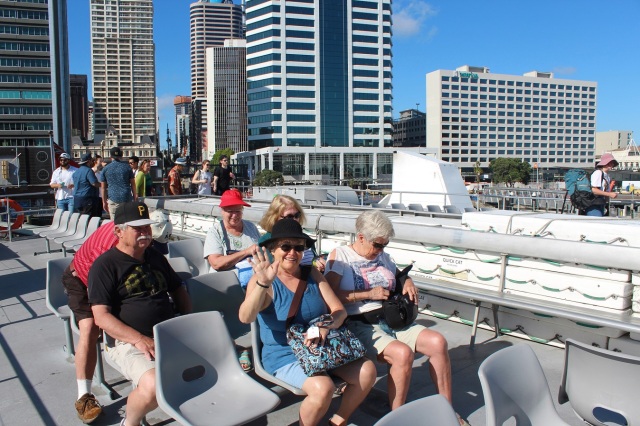 [We headed out into the harbor, wary of the annual tub boat races in progress . . . ]

[Passing the New Zealand Navy on the starboard side.] 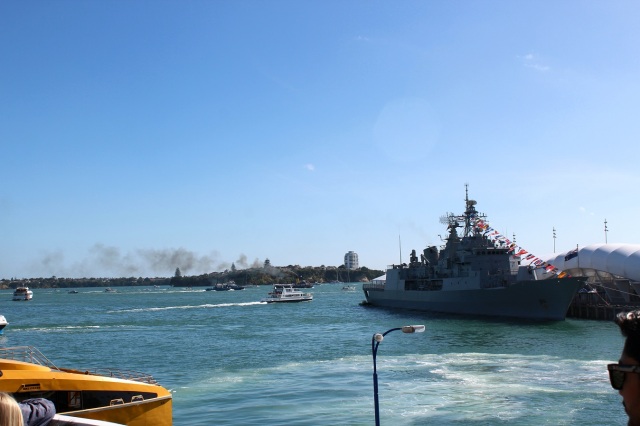 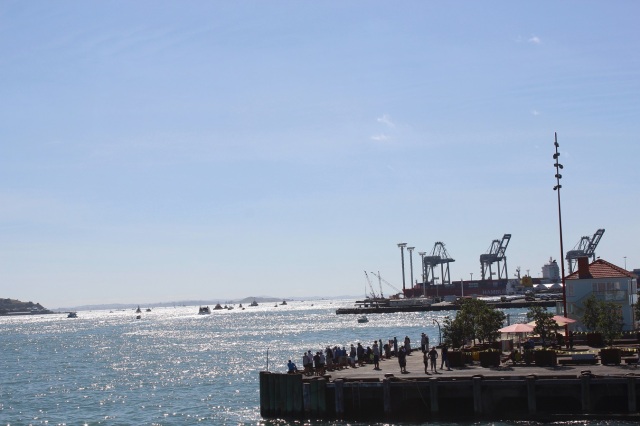 [The Biddies look lovely in a blue background.]

[The Mother of All Bridge Cranes looks lovely in a blue background.]

[Maybe that’s why the two blue tugs are after him?] 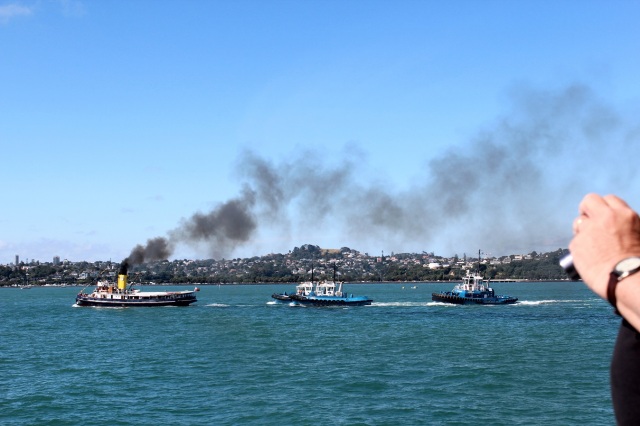 [Bert and Kathy, with Auckland incidentally in the background.]

[As I recall, the Grosses took a bus trip out this far the previous day while The Biddies and me were hiking the city.]

[One room apartment, for rent.] 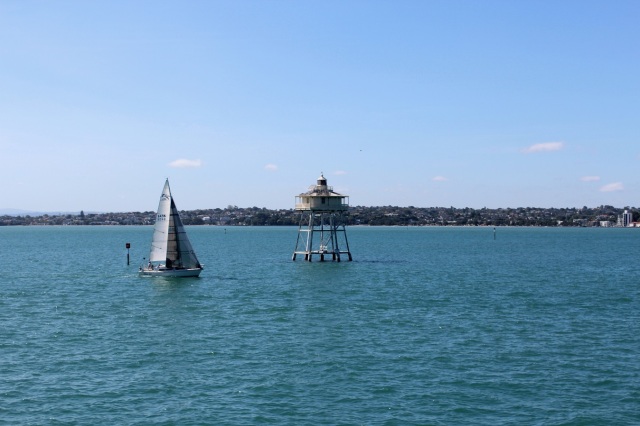 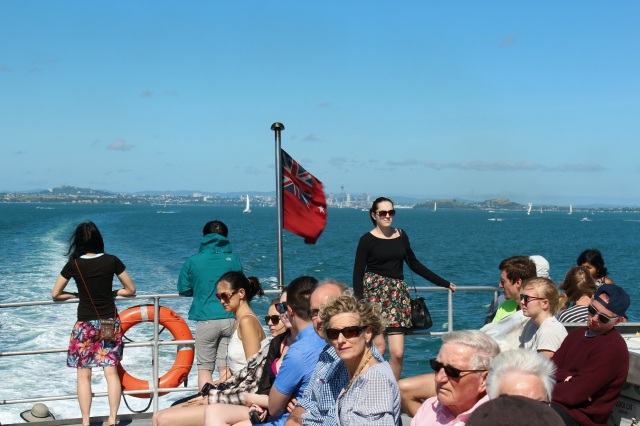 [We sneak in three photos from the Super here as we appear to be closing in on Waiheke.]

[I believe we have a sighting.]

[Yes, there appears to be a human being on the highpoint.  I believe it’s part of the island’s sculpture trail.] 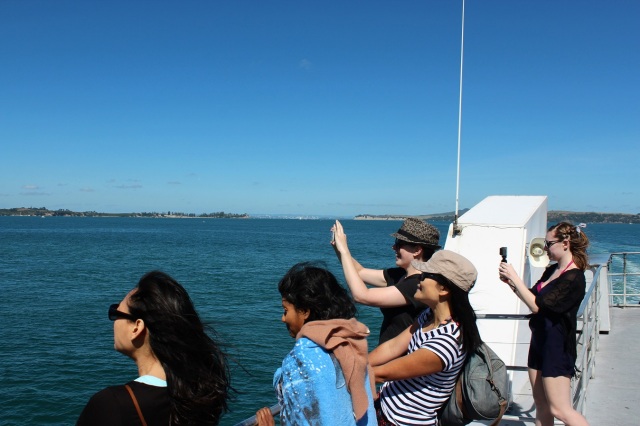 [And there’s Auckland way back there in the distance.]

[Auckland’s still visible off the stern.] 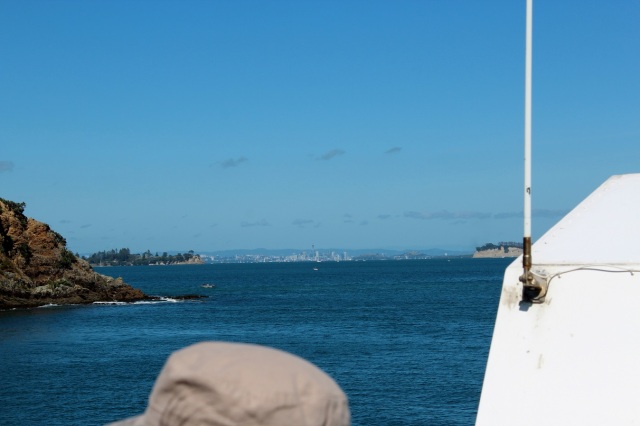 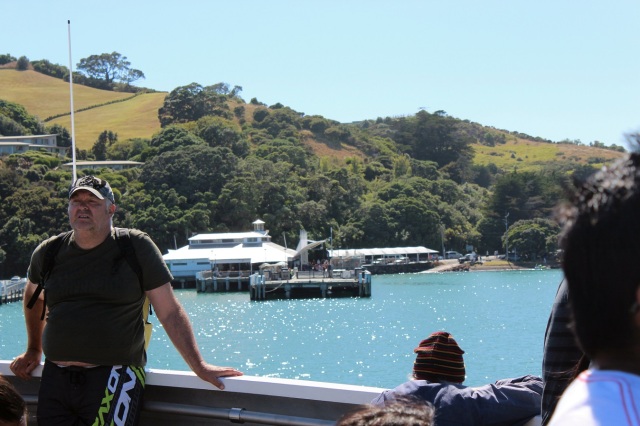 [So, what’s the deal:  Waiheke Island is in the Hauraki Gulf.  Its ferry-terminal in Matiatia Bay at the western end is 21.5 km (13.4 mi) from the downtown terminal in Auckland – measured on GPS by Fullers Ferry captains.  It is the second-largest island in the gulf, after Great Barrier Island.  It is the most populated island in the gulf, with nearly 8,730 permanent residents plus another estimated 3,400 who have second or holiday homes on the island.  It is New Zealand’s most densely populated island, with 95 people/km², and the third most populated after the North and South Islands.  It is the most accessible island in the Gulf, with regular passenger and car ferry services, a Waiheke-based helicopter operator, and other air links.  In November 2015, Waiheke Island received international attention when it was rated the fifth best destination in the world to visit in 2016 by Lonely Planet and also voted the fourth best island in the world in the Conde Nast Best Islands in the World List (Wikipedia).] 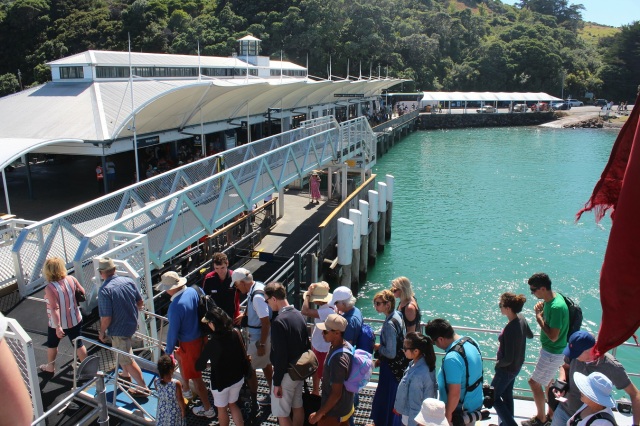 [Now we’re on a bus tour.  This is one of several beaches on the island, I believe Oneroa, which has a Little Oneroa Beach to the east separated by a cliff.  That seclusion apparently makes it an unofficial a clothing-optional beach – Little Palm Beach is officially a clothing-optional beach (they did not take us there).  For some reason that information always seems to catch my ear?] 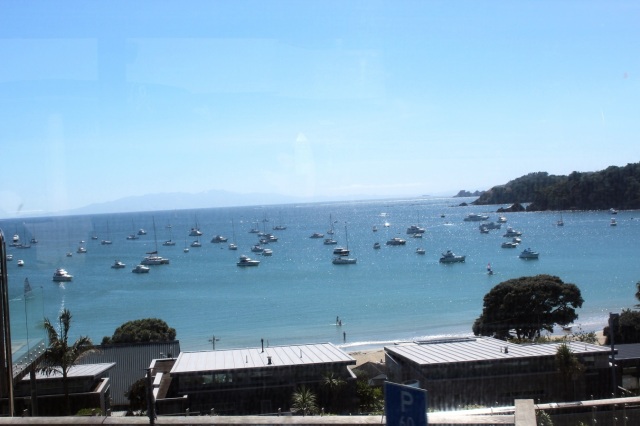 [A small bay on the opposite side from the above beach.]

[Whoa, it appears we have discovered a winery.  We’ll be back!]

[But first we continued on to what I believe is the island’s biggest beach, Onetangi.]

[And we’ll be back to the beach, but next we went back to the aforementioned winery, which just happens to share a bus stop with the Museum of Waiheke.] 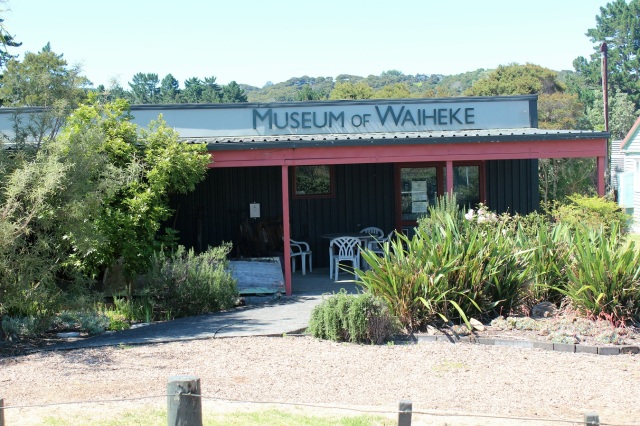 [The winery had priority – plus we were looking for some eats.]

[The Super took the next four shots of our assault up the hill.]

[And now I’m back – this is Tantalus Estate.] 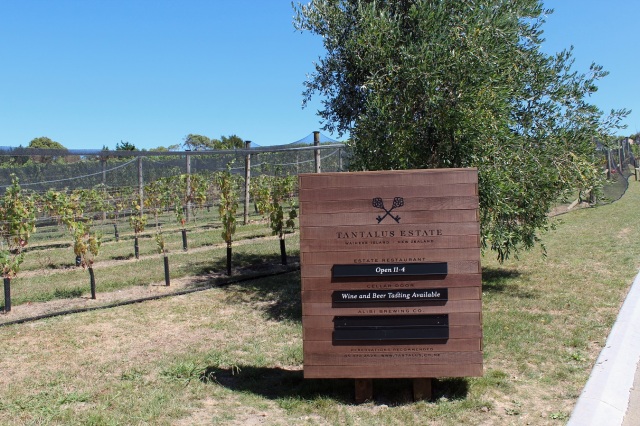 [And in the facility, which did indeed have fine dining.  We were early enough to get a table for eight – luckily because they said they were totally booked for lunch.]

[Outdoor dining inside – it was perfect!] 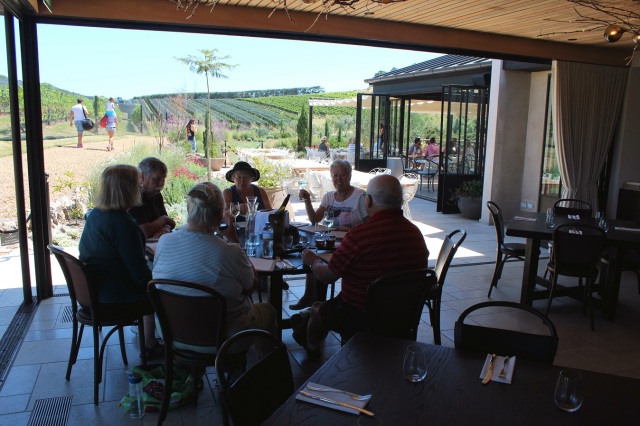 [And three thumbs up for their Pinot Gris!] 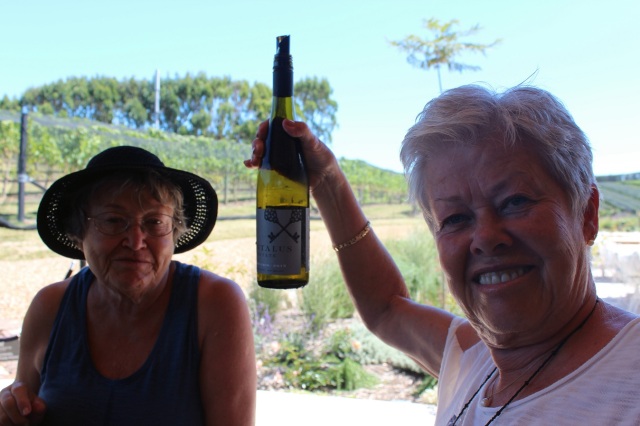 [After lunch at the winery, back to Onetangi Beach.  There go The Biddies.  I don’t do beaches – I’m allergic to sand in my shoes.] 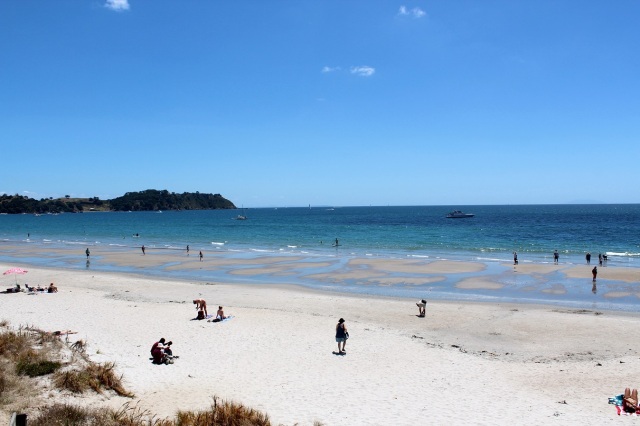 [The Biddies are at water’s edge.]

[This north-facing beach is over a mile long.]

[The Biddies hand signal their return to the sanity of pavement.]

[Here’s our hop on – hop off bus, a driving force in the tourism industry.] 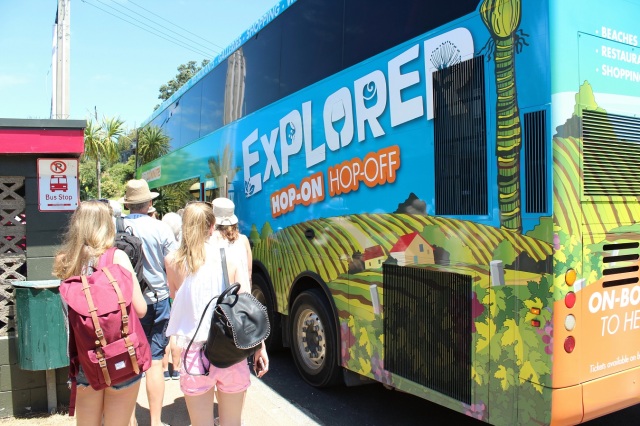 [Arrghhhh, but somehow we missed it?  Waiheke has become internationally known for the biennial Headland: Sculpture on the Gulf, an “outdoor sculpture exhibition set on a spectacular coastal walkway on Waiheke Island in Auckland’s Hauraki Gulf.”  It takes place towards the end of January until approximately mid February every other year. It was listed by the New York Times as no. 35 in its list of 46 must see places and events for 2013.  The sculpture walk attracts thousands of visitors to Waiheke, for example, more than 30,000 people walked the sculpture walk in 2013  (Wikipedia).  We looked for the trail, misread a sign obviously, and walked back to port along vinyards and assorted other natural habitat.] 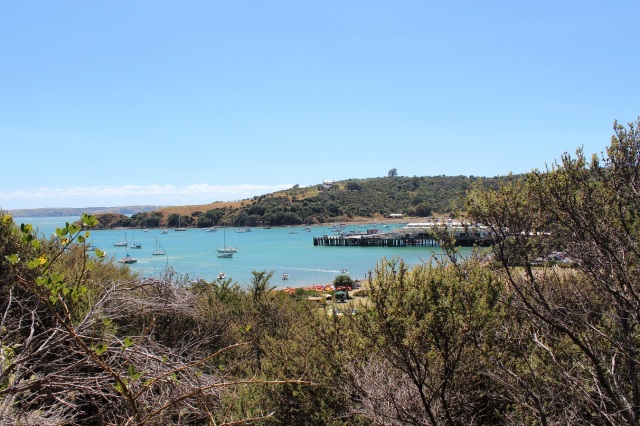 [So, this is what we actually walked.]

[Back to the port beach area.] 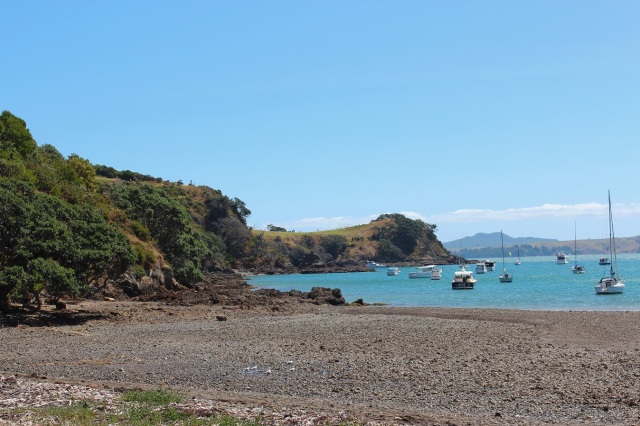 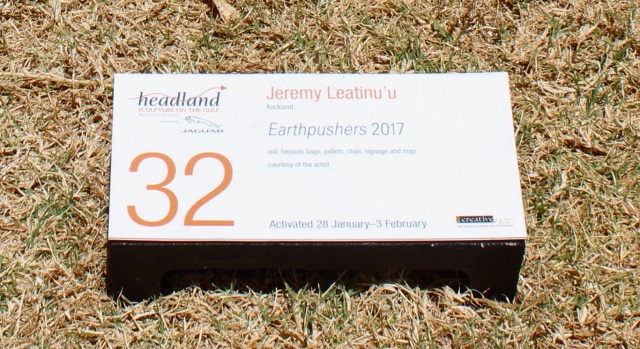 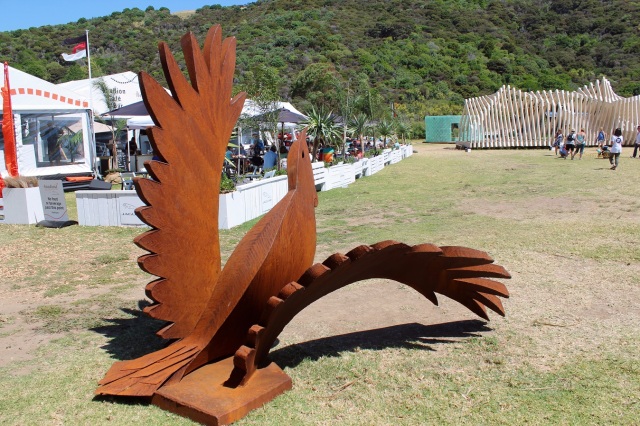 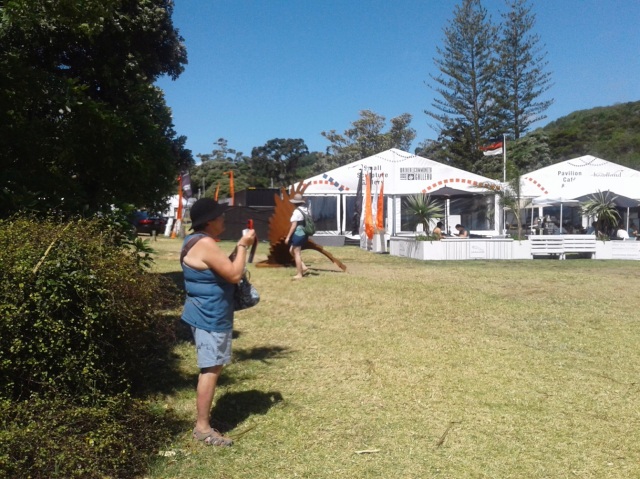 [Trying hard to walk and take pictures at the same time.]

[The Super got the next two as we pulled away from the island.]

[There’s that sculpture trail.  We were too far inland.]

[Arriving back in Auckland.  We had a discussion with the women in the photo, locals, on the way back.  They asked where we were from.  We said the U.S., Minnesota.  They knew of Minnesota as a place that was cold.  They asked what cities were there.  We said Minneapolis and St. Paul.  They had heard of them.   After a few minutes pause, I asked them how long it took them to learn how to drive on the wrong side of the road?]

[Yeah, really was too bad we didn’t have a nice day?]

[Walking through the local plaza mall on our way back to the hotel . . . ]

[We had time to go out for breakfast and spend our last couple hours in the “neighborhood.”]

[For some reason this place was of some interest for them?  And they certainly spent a lot of time in there while I sat outside and people watched.]

[This was a small plaza about halfway between the port and our hotel.  It was right outside Tiffany & Co.  When The Biddies came out, we ate a carryout breakfast on the plaza while the Super shot these photos of our entertainment – eventually stripped down to his diaper by his parents so he could run around in the fountains that went off randomly.] 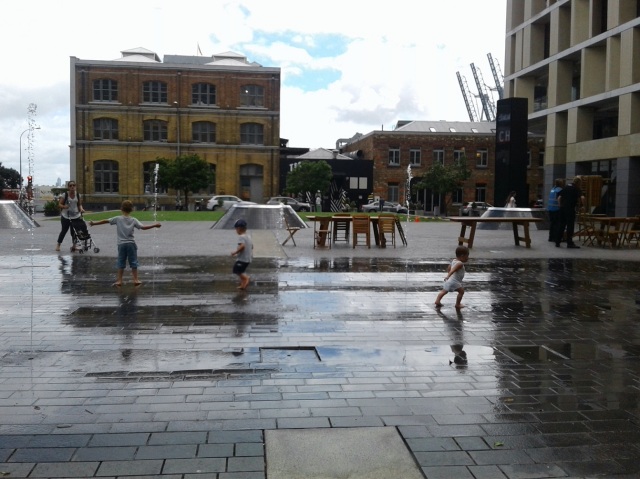 [We began winging our way back to the Northern Hemisphere . . .  ] 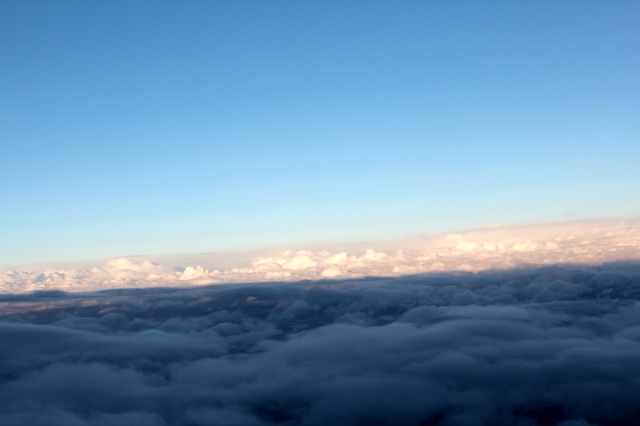 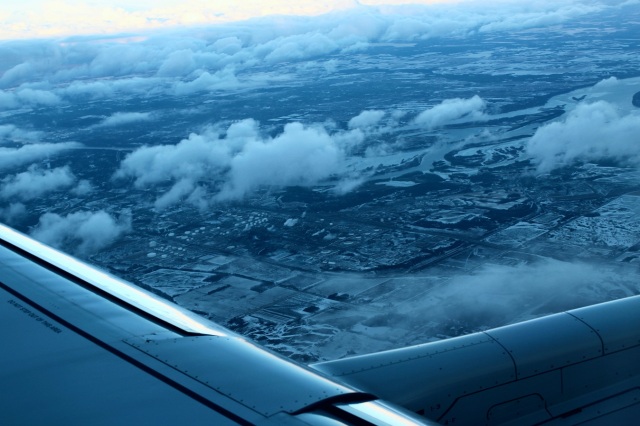 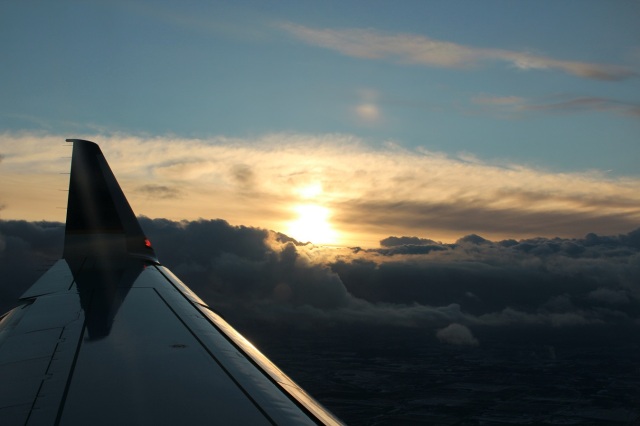 [If you’re going to San Francisco, be sure to wear some flowers in your hair . . . and regained the day we lost on the way over.]

If it would not look too much like showing off, I would tell the reader where New Zealand is.  ~  Mark Twain 1897