[Prelude: Although this was previously “published” on my other blog, it seems fitting it should be a cornerstone to the sports blog. Basketball Dan is a real person, though modesty prevents identification beyond that sobriquet (the attached photo is from 40 years ago and, as for most of us, could not be used to identify him today). He arrived in Minnesota over 40 years ago from Wichita, Kansas, and immediately dazzled the locals by never wearing anything heavier than a windbreaker in Minnesota winters. He competed across the country in professional bowling tournaments – then suddenly quit cold turkey, leaving approximately 20 bowling balls instantly unemployed. He served as our tour guide through 30 years of Final Fours, which usually were mere fronts for fine dining across the country. We are forever thankful to him for that. He is eminently successful in his chosen field – a field amenable to his rigorous avocation travel schedule. And he for 30 years now has hosted an annual Turkey Day for old friends that generally coincides with the Ohio State-Michigan football game. Such, and the following, are what led his Englander roommate at North Carolina State, where he obtained his Masters degree, to dub him “The Great One.” This was originally written in February 2005, amended subsequently based on my faulty memory (so I expect numerical corrections from the lead character) and submitted to various sources for publication – they all saw fit not to do so (their loss!).]

This is a story that has long waited to be told. And though it may seem farfetched, it is absolutely true. The protagonist, unfortunately, has requested anonymity for reasons known only to him (a Valerie Plame complex?). I can only tell you that his last name is a common building material (hint: you can rule out aluminum siding). For purposes of this story, he shall be called Basketball Dan, and he must be statistically the number one sports fan in the country.

Basketball Dan is a longtime Twin Citian. We – his friends, his entourage, his semi-cult like following – first met him as fellow students at the University of Minnesota in the mid-60’s. We knew we were on to something special when we discovered that Basketball Dan did not miss a single Twins home game (162 of them) in his first two years at the ‘U.’ We soon learned that was just the tip of the iceberg.

During his post-graduate era, Basketball Dan acquired a near mythical standing on the ‘U’s’ intramural softball fields for his big bat, nimble fielding, and huge hands. It was also during this time that the legend began to grow. We discovered that he attended his first NCAA Men’s Basketball Final Four in 1954 – as you may recall, LaSalle, led by Tom Gola, were the champs that year. He also attended the Final Four in 1957, 1970, 1973, 1974, and then in every year since 1976 (when I first joined him to cap Indiana’s undefeated season at the Philadelphia Spectrum) – with the exceptions of 1999 and 2000 for personal and family health reasons. Almost without exception, during each of those Final Four years, he also attended first and second round games (until the advent of satellite coverage) and regional semi-finals and finals. I recall one year when there were regional games in both Louisville and Cincinnati – and because of the Thursday-Saturday and Friday-Sunday formats, we were able to see all of the games at both regionals. 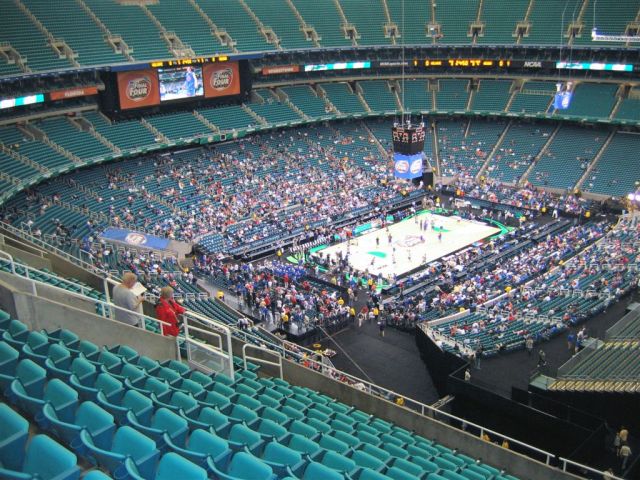 Basketball Dan has attended a pro football game everywhere except Miami, though he acknowledges he hasn’t been to the new stadiums in New England and Tampa. He has attended a pro basketball game in every city, though lacking the new arena in Denver. Phoenix is the only place he has yet to attend a pro baseball game. OK, I can hear you say, the list until now has been pretty impressive but undoubtedly has been accomplished by others. So the following is where Basketball Dan separates himself from the field.

There are currently 326 colleges or universities with Division I basketball programs (Basketball Dan points out this number is always in flux because of programs like Longwood, Utah Valley State, and Northern Colorado that are in the process of moving up). He has attended basketball games (with multiple arenas for several campuses) at over 300 of those schools (if you averaged 10 new schools every basketball season, it would take over 30 years to accomplish that feat). There are 119 Division I football programs – he has attended games at all of those schools. Included among the football games was “The Game” between Cal and Stanford (remember Cal did a multiple-lateral kick-off return and scored a touchdown trampling Stanford band members in the end zone as the game ended). And through it all, he has yet to be denied entry into any game he has gone to see. You must recognize that many of these venues are total sell-outs to season ticket holders – his most difficult entry proved to be at a Gonzaga basketball game; he had resigned himself to finally being shut out, when at the last second a season ticket holder arrived with an extra ticket. Because of the nature of the beast, Basketball Dan is on a first name basis with nationally-known “ticket brokers” (a/k/a, scalpers), and through other interesting people he has met on these adventures was able to score access to Wimbledon tickets, his only venture into international athletics.

[The entourage dining in Indianapolis, 2006.]

A typical weekend for him is thus (here from 2005): Belmont, Troy, Alabama-Birmingham, Southern, and possibly Huntsville in the NBDL, whatever that is. I would venture to say that quartet would not show up on the schedule of any other alleged rabid basketball fan. We have no doubt Basketball Dan will ultimately achieve attendance at his remaining sites (he even began doing national parks several years ago and has put a considerable dent in visiting all 388 of them). Northwest Airlines should send a limo to his front door for his every weekend getaways. His double secret platinum card with that airline did allow him to escape on the last plane out the Northeast after the big snowstorm in 2005. 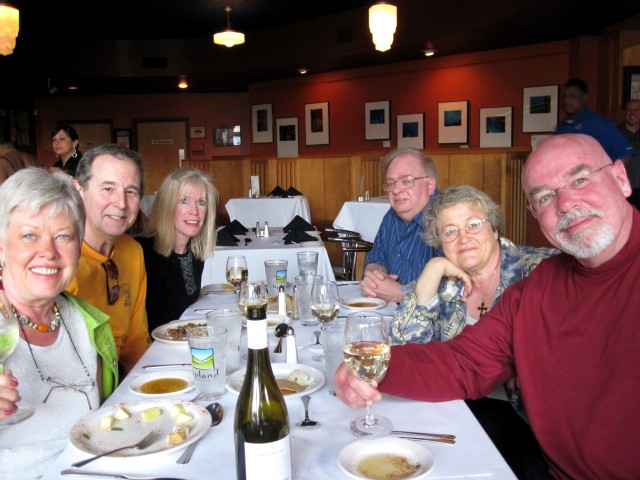 The road to the Final Four ends in Houston this year. Basketball Dan will be there, of course, after intermittent stops, undoubtedly, at various regionals – and he will be able to tell you the five best places to eat in every city he ventures to. All I can say is it has been a pleasure being this close to greatness – long live the king!

[Ruthie enjoying Arthur Bryant’s in Kansas City, the year lost in the fog of time.]

[We will not be joining the Great One in Houston this year – we received a better offer from Sarasota. But this is the year he thought he would “complete the list.” This article came to mind this morning while I was visiting with a Tommy alum (a further clue as to Dan’s true identity).]

[Why we opted for Sarasota.]

[Addendum, by e-mail dated February 2, 2011, from the man himself:  This weekend at Texas Southern, next weekend S. Dak. St, and March 3 at Grambling.   That leaves only Mississippi Valley State (where I got snowed out of in mid-Jan), and where I can’t get back to again this season.”  There are 347 D-1 college basketball schools – only Mississippi Valley State is left, giving it recognition far greater than anything else in the school’s history!]

And there are a few new college basketball facilities: at Louisville, Gonzaga, Texas Tech, Oregon (I’ll get that in a couple weeks), Quinnipiac, St. Joe’s (I’ll get at end of Feb) built since I was there last and a few more under construction:  Texas Arlington,  Bowling Green, Troy, Nebraska, that I know of.]