Of course, what football game of worth does not begin with a grape stomp (a 3-day event, hence the delay in this missive)?

[The opening kickoff of the Stomp – Anthony, the tried and true!] 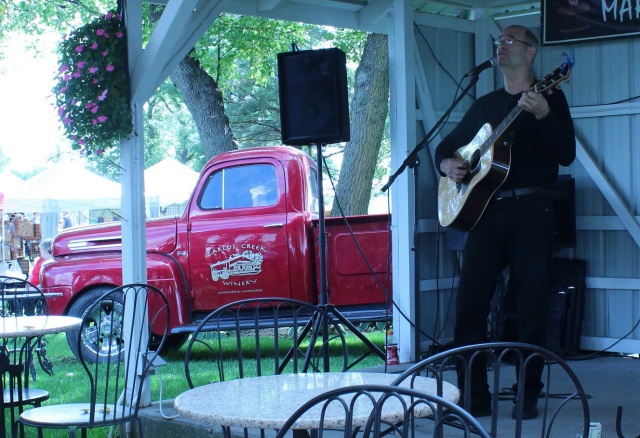 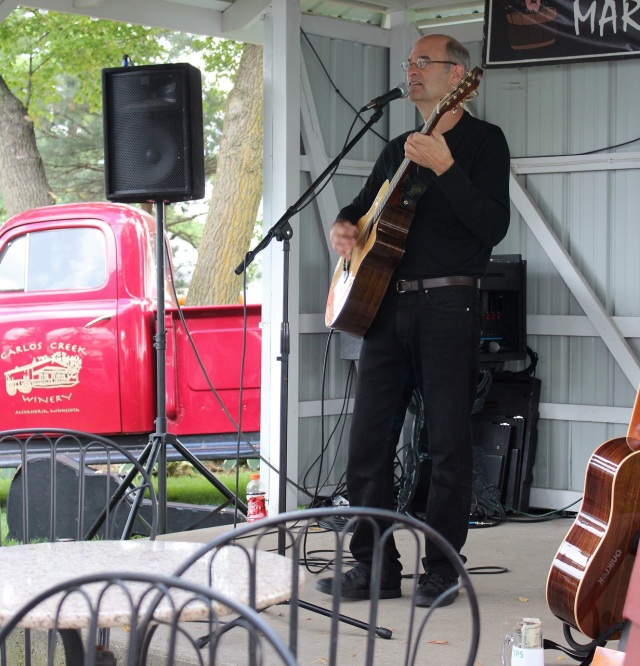 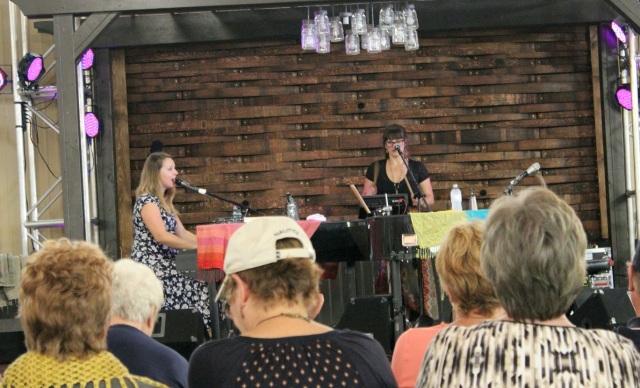 [and Monroe Crossing.  Delighted I finally got to see this revered blue grass group.  Unfortunately, a heavy rain about an hour earlier in the morning really cut down the fan turnout.] 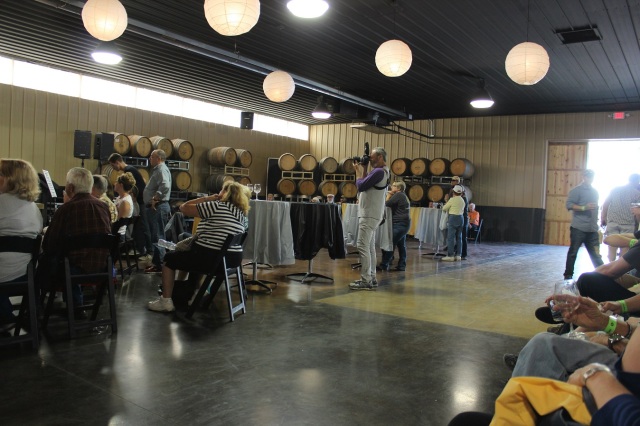 I believe it was parents night, but don’t hold me to that, as we entered the hallowed grounds of Cardinal football.  The seniors greeted us all along the fence line as we shuffled in for a tailgate burger.  The number of seniors is indicative of why we were expected to be and are pretty good. 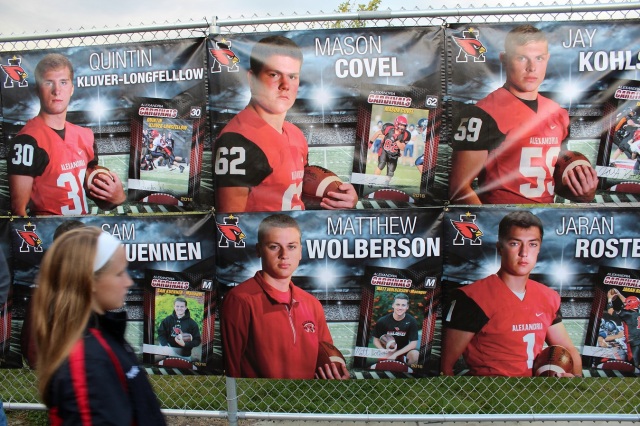 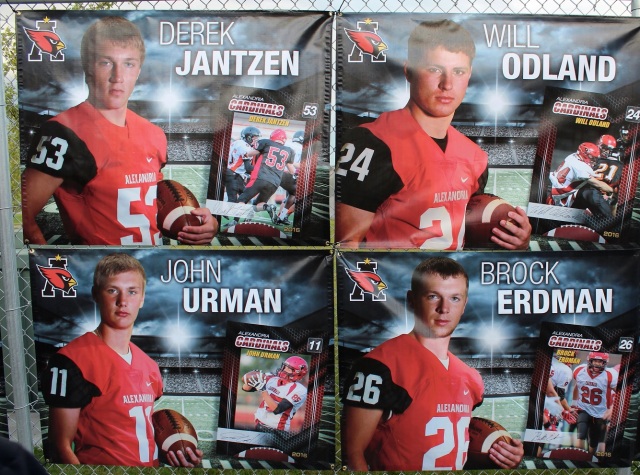 [The sky appears as a sky does after a hard rain that ended about an hour before game time. ]

[Turned out to be a lovely evening for football.] 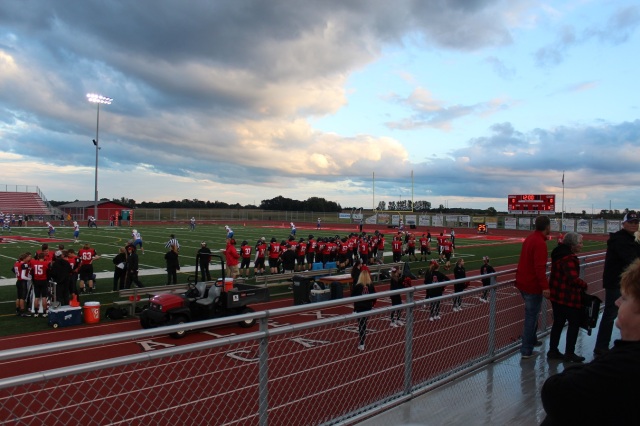 [The opening kickoff with the spheroid magically appearing in all three shots!] 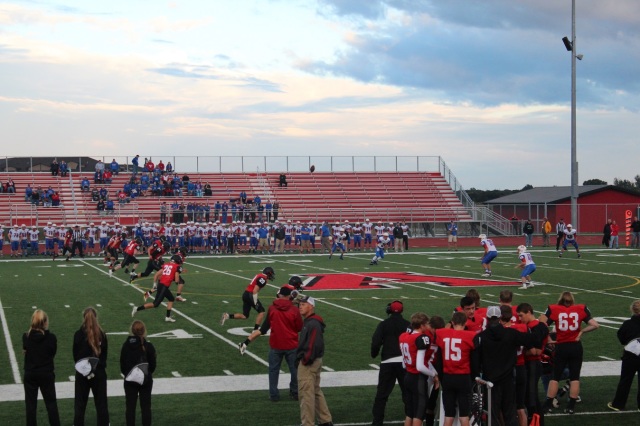 [Eagles and Cardinals fan out to the northeast  . . . because birds of a feather flock together.] 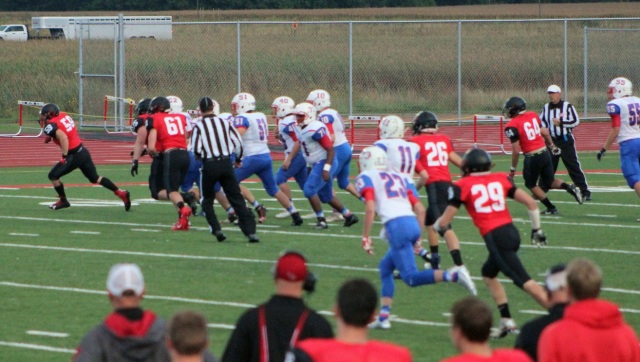 [Believed to be the opening series for the Cards.  QB Jaran Roste (1) looks to WR Cody Faber (33) in the right flat.] 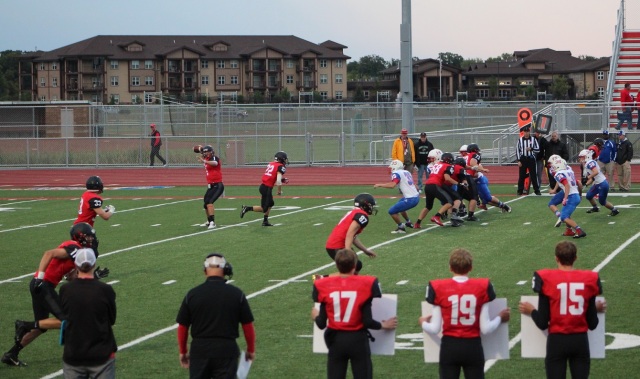 [After last week’s performance against the Spuds, the defense deserves a little “air time.”  The run defense was terrific again; the overall defense as well . . . until the speed bump that was the 4th quarter.]

[It appears to be a schmoosh!] 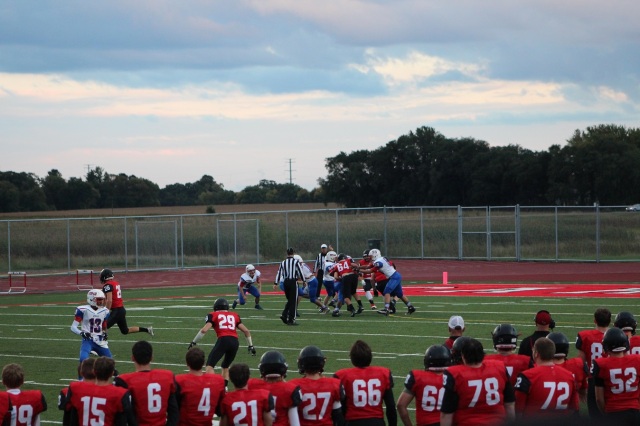 [Back on offense, Roste hands off to Micah Christenson (22) as the Big Uglies up front perform a bit of choreography to pave his way.] 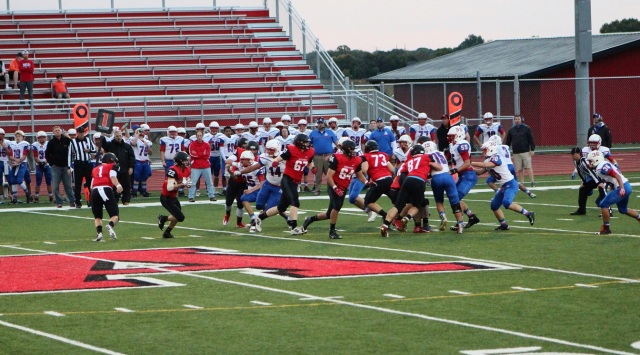 [Macy Hatlestad preps for her role as a winter sport point guard by being a sports medicine assistant.] 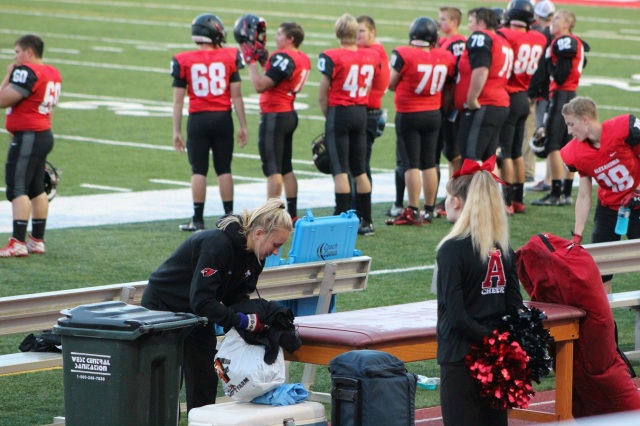 [Meanwhile, back on the field, there appears to be a discussion about the relative merits of red or white sauce on pizza and pasta.]

[Attempting to work up a dinner appetite, WR John Urman (11) streaks down field with a pass reception.] 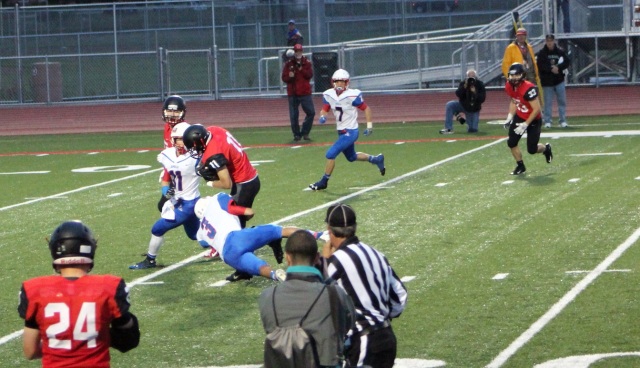 [The result of said pass was unknown as we went to press.]

[Well, here he is again, making me believe his previous attempt was unsuccessful.] 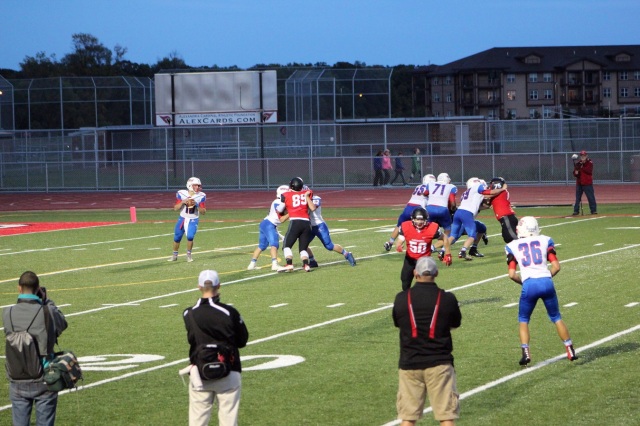 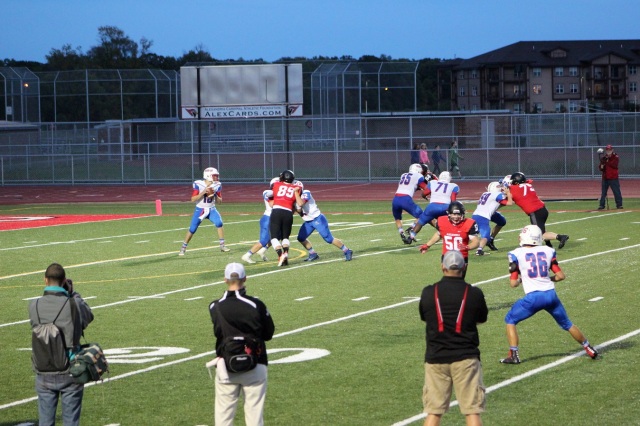 [The Cardinal coach’s action on the sideline indicates as successful defense action.]

[And here the fun begins.  The Cards had scored first on a 10-yard pass from Roste to WR Spencer Hockert (84).  The Eagles came back on a short field after a turnover by the Cards, as I recall, and on a 3rd and long Atkinson threw up an under duress pass into the end zone where their Mr. Everything, Peter Nelson, outleapt our DB for a touchdown.  The Cards came back with back-to-back 20-yard TD runs by Christenson.  Nelson countered with a 90-yard kickoff return.  The Cards immediately countered with this play  . . . ]

[And 65 yards later the Cards had a 2-touchdown lead again.]

[Here Roste and Christenson fan right on an option play . . . ] 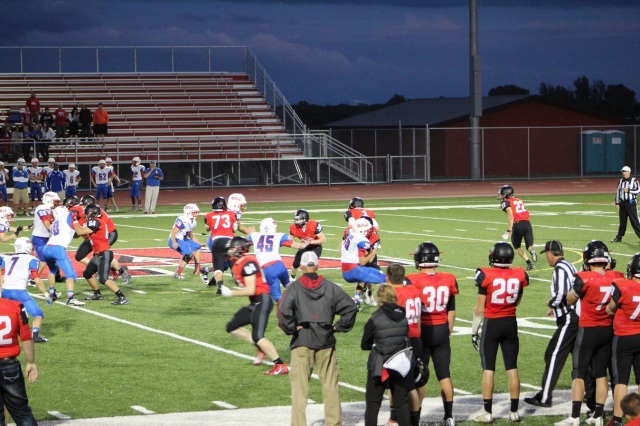 [Before the half ended, the Cards scored on a blocked punt and return by Quintin Kluver-Longfellow, whose name was called a lot on the defensive side of the ball.  The game was going as planned.  The Card offense was putting points on the board; the defense was continuing to look good.]

[It was a night for a starring role for cheerleaders of all ages!] 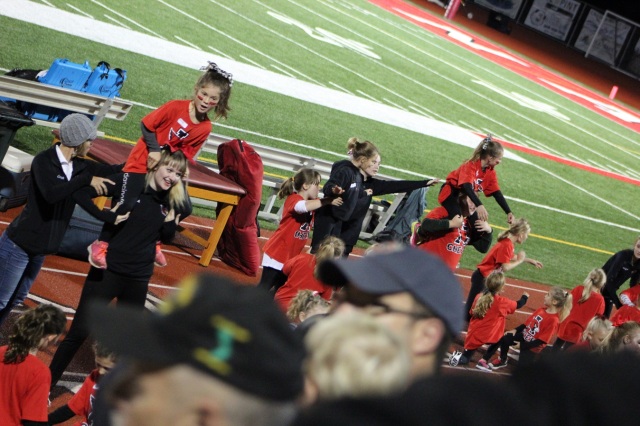 [In the 2nd half, Micah takes a hand off as the right side of the O-line blocks down left while the left side circles back to right – this is a movement originally designed by Merce Cunningham for the American Ballet Theater.]

[Ooops, it was a fake to Micah with the handoff going to RB Chandler Cole (38) in the other direction.] 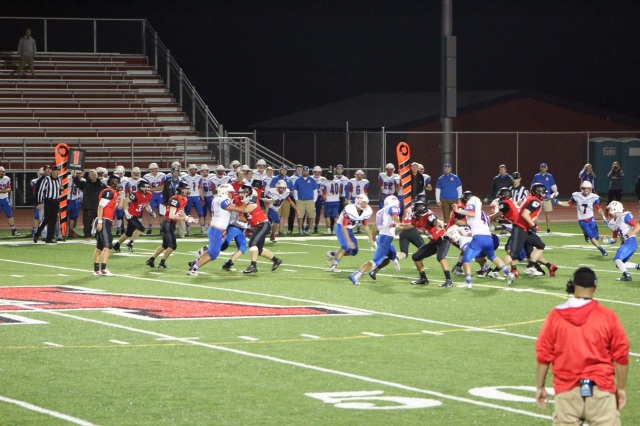 [And Chandler again.  He gives us a nice 1-2 punch at running back.]

[Among Macy’s other tasks is to scan and estimate the gate.]

[The 4th quarter became an unbelievable shootout between our Micah and their Atkinson.  In the 3rd, Micah scored another TD on a 24-yard run; Atkinson threw a 37-yard TD pass for the Eagles.  In the 4th quarter, Micah opened with a 96-yard TD run . . . ] 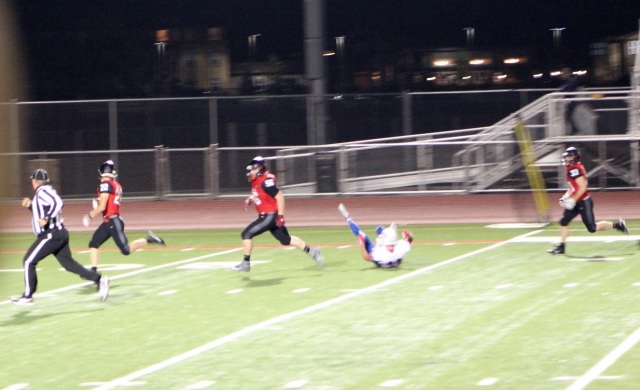 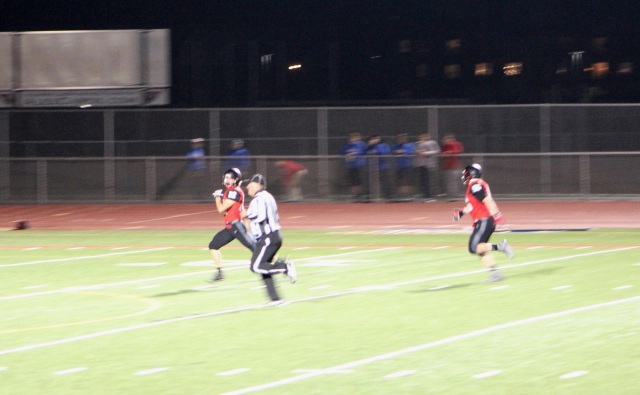 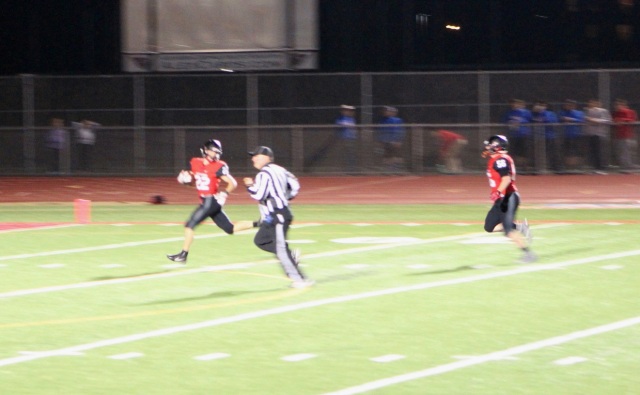 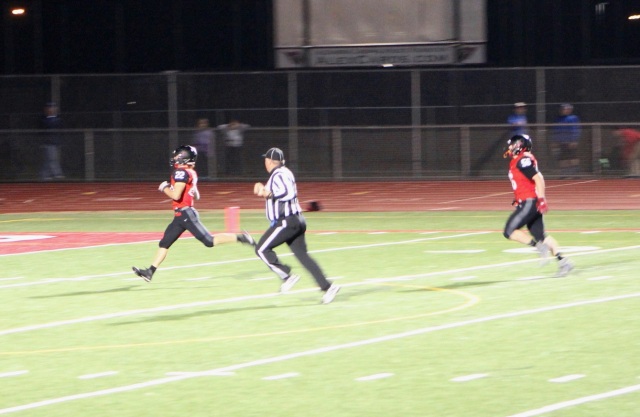 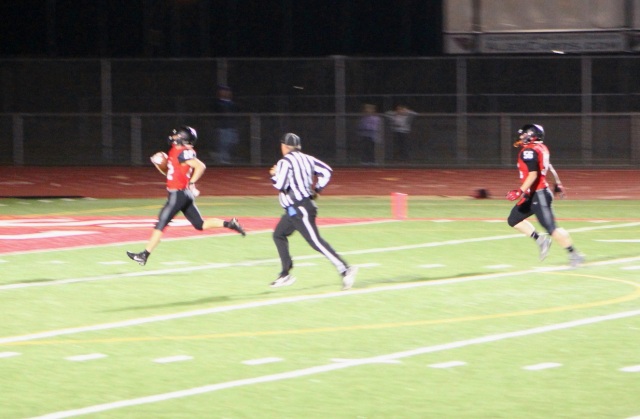 [Atkinson answered by throwing three consecutive long TD passes to end the scoring.  I’m not sure if the Cards just had defensive lapses with the huge lead . . . or if the Atkinson to Nelson combination is just that good.  I’m inclined to believe the latter.  Many times we appeared to have him sacked but he would escape and complete passes.  He ended with 388 yards passing and 5 touchdowns.  Micah unbelievably had 190 yards rushing . . . in the 4th quarter alone!  He finished with 266 yards rushing on 20 carries with 4 touchdowns.  It was something to watch.]

[At the end, the Cards just kept pounding the ball on the ground to run out the clock.] 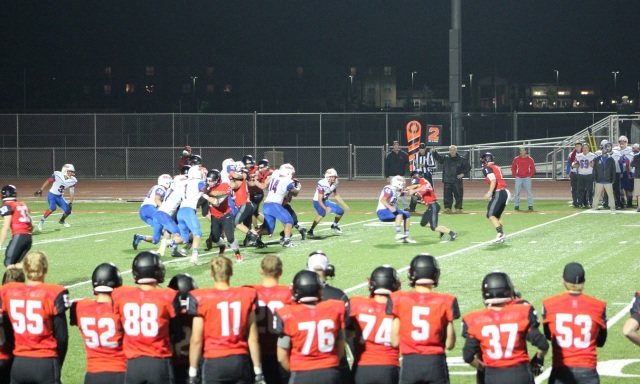 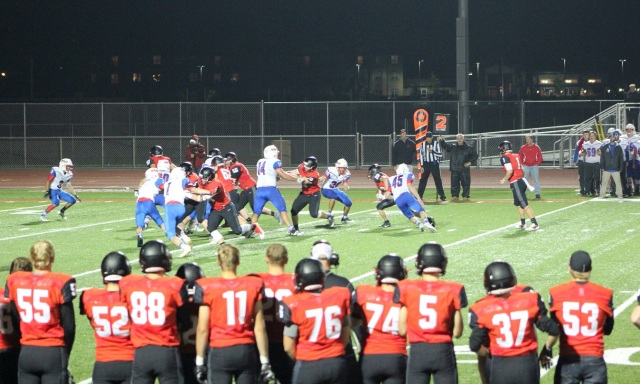 [With the Big Uglies really showing their stuff.] 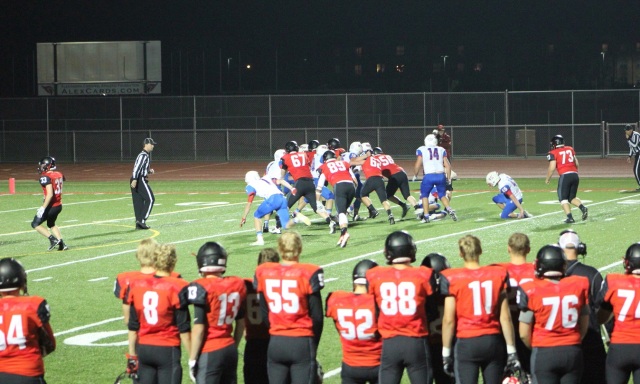 Football combines two of the worst things in American life. It is violence punctuated by committee meetings. ~  George Will