There were high hopes for this Cardinal football team heading into the season.  A good core of returning players from last year’s team that averaged over 35 points per game seemed a logical reason for such optimism. And then in the first game of the year, the Cards avenged last year’s home opener loss (44-38) to a Monticello team that went 8 – 2 by beating the Magic at their place, 51-39.  But on this night we were facing the Dreaded Spuds.  Moorhead is the only city over 30,000 (now almost 40,000) in the entire 7th U.S. Congressional district. They are always Goliath to everyone else’s David, and our Cards were on an 8-game losing streak to the Spuds.  This year figured to be our best chance – the Spuds lost 31 seniors from last year’s team so we had the advantage in experience.

[A beautiful night for the home opener!  The Super and I arrived early enough for the tailgate party by the concession stand – burgers and chips!]

[The Spud side.  OK, most high school teams do not travel well in this part of the world – the distances are vast out here on the almost prairie.  It’s almost a 100-mile drive for the Spud fans.] 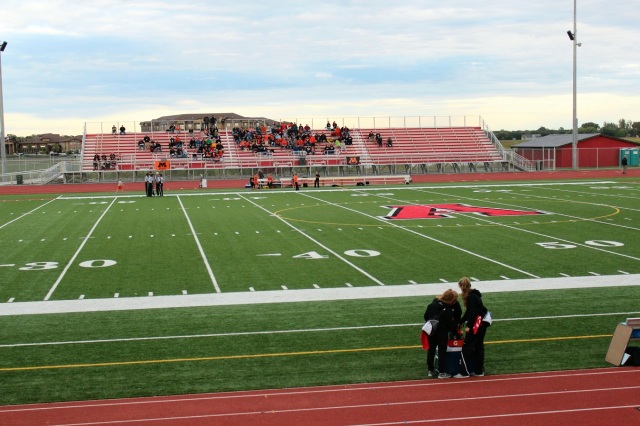 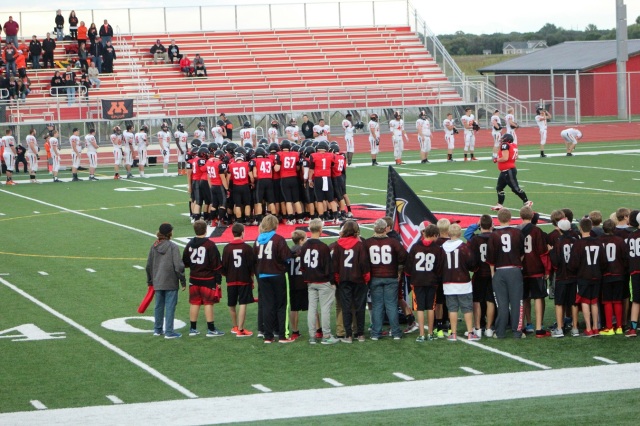 [The Spud.  No. 6, Carter Howell, is a Cardinal legacy – his dad played for the red and black.  And his grandparents, Jeanne and Ken, are Alexandrians who now sit on the Moorhead side for these games because blood is thicker than . . . well, everything. Ken is also a member of the Fat Boys Walking Club, though he does not fit the “profile.”]

[And Carter had a great game against us with 8 pass receptions.] 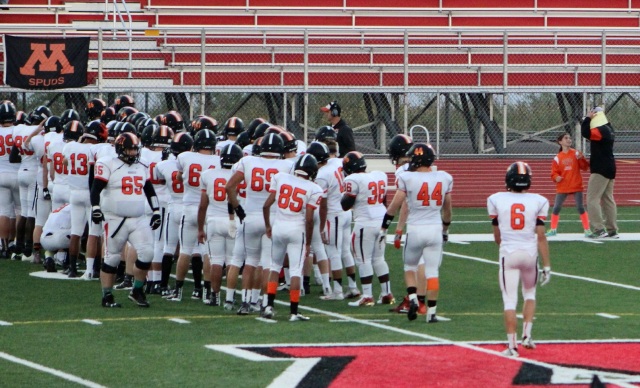 [The Cardinal brain trust.  Coach Brandon Strouth, center, often is works out at the Y while the Fat Boys are ambling.  We offer advice which he respectfully (and properly) ignores.  He was the star halfback on on our early 2000’s state tournament teams.] 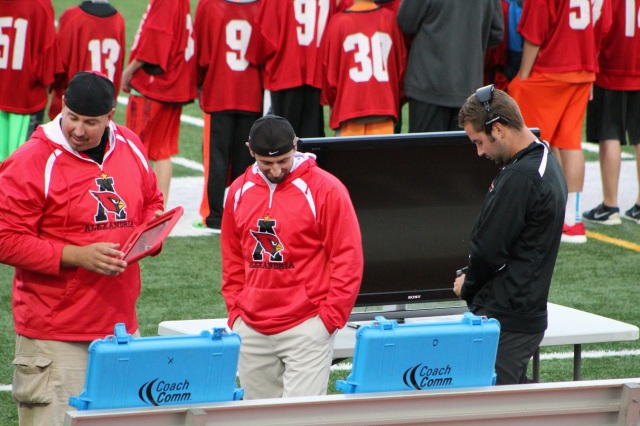 [As Cards are introduced, they try not collide with Mr. Ripley.] 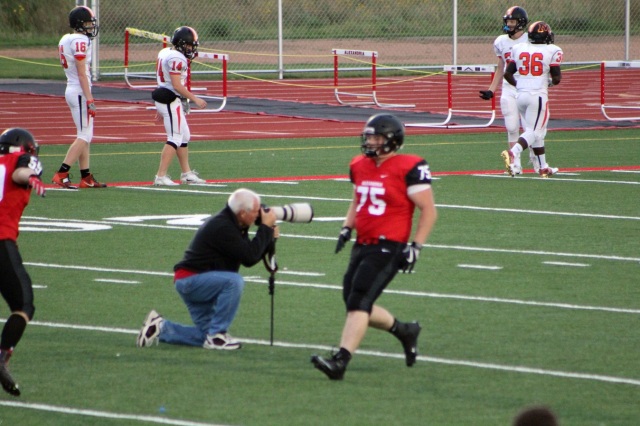 [And the rest of the Cards.] 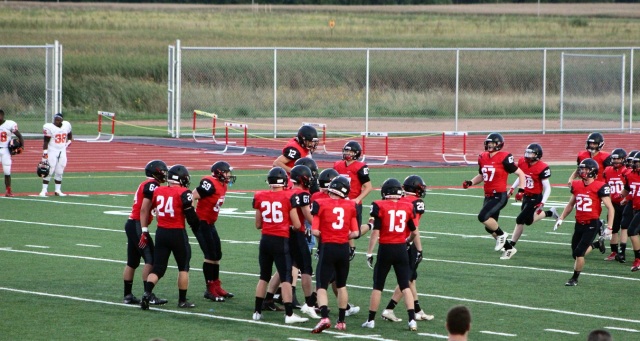 [While attempting to inspire the older fans (who got in FREE) to cheer, the cheerleaders at least helped to keep us awake past our usual bed times.]

[The Cards kick off with Zach Harstad (2). Both kickers reached the end zone most of the time, which is an automatic touchback in high school ball.] 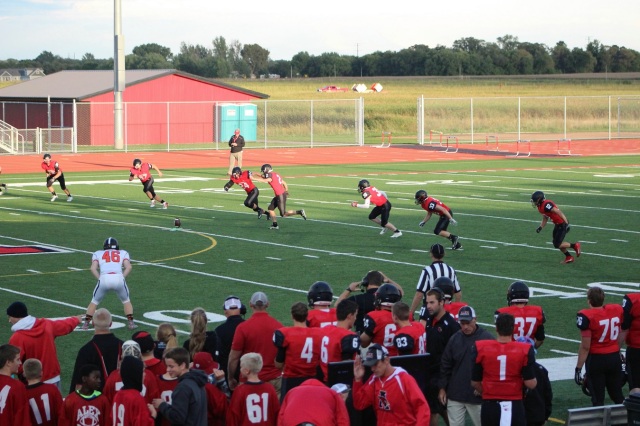 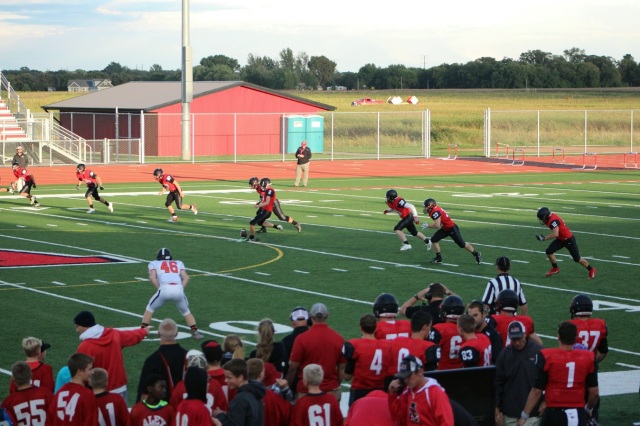 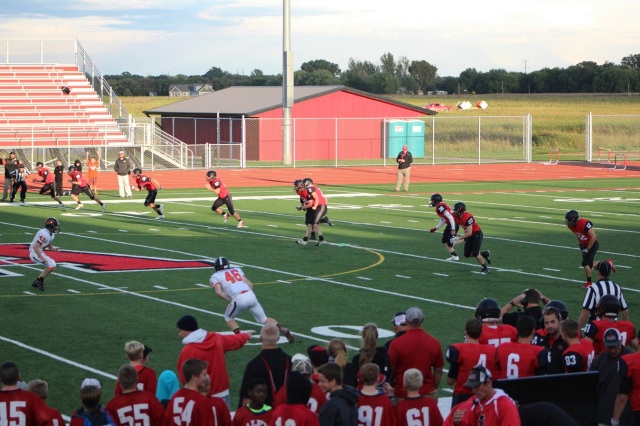 [And the game’s first play from scrimmage.  A portent of things to come.  The Cards had a great game defensively, holding the Spuds to about 2 1/2 yards per carry.  And this could be an ad for Grand Arbor . . . if you lived there, you could walk to the games (though I would still prefer limo service, or at least valet parking).]

[Our first look at senior halfback, Micah Christenson (22), waiting on a punt.  Micah is a key ingredient in our high-powered offense, in this game rushing for 167 yards on 24 carries (as I recall).] 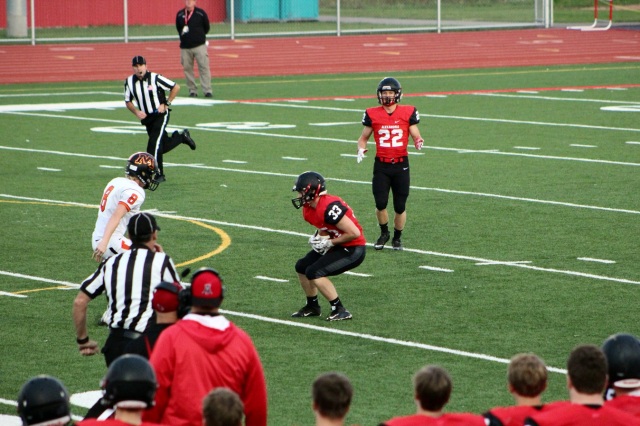 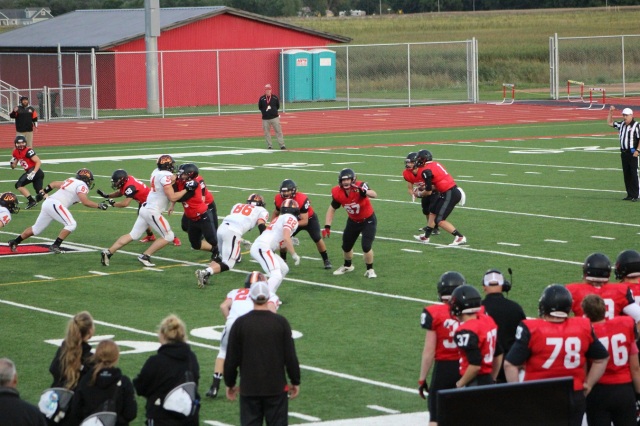 [Of course nothing works on offense unless the Big Uglies (John Madden’s endearing term for offensive linemen) up front are doing their jobs.  And they did.] 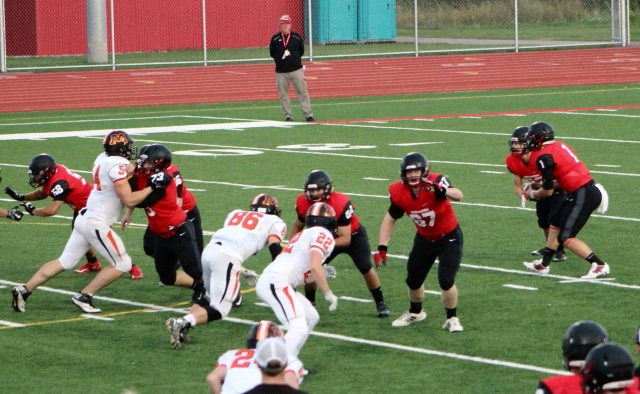 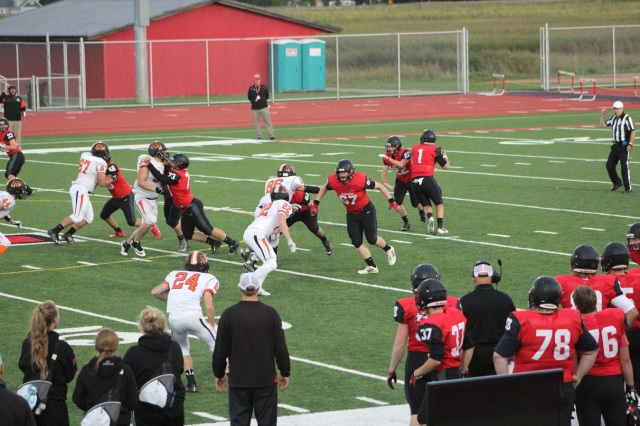 [Jaran threw a pass to the right flank.  As I recall, a small gain.] 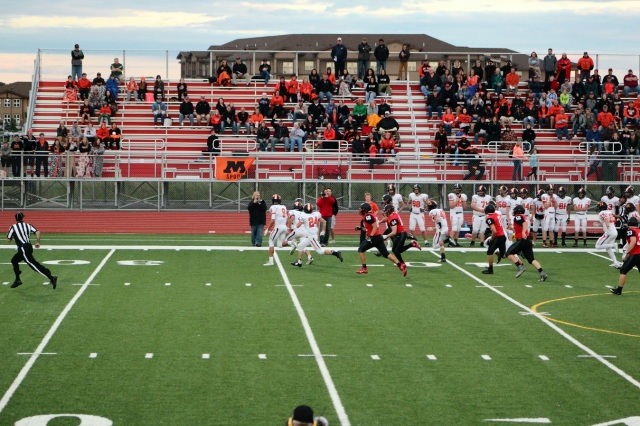 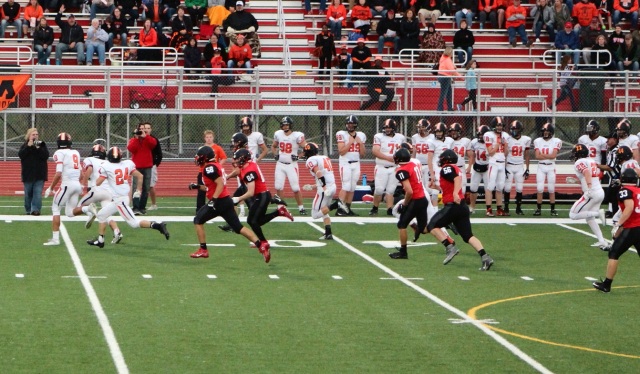 [Micah’s run put us in scoring position, but on this play Jaran took a big hit . . . but I can’t find the ball?]

[We still had possession – and here’s the first TD of the game.  Jaran on a 10-yard pass to senior wide receiver Spencer Hockert (84).] 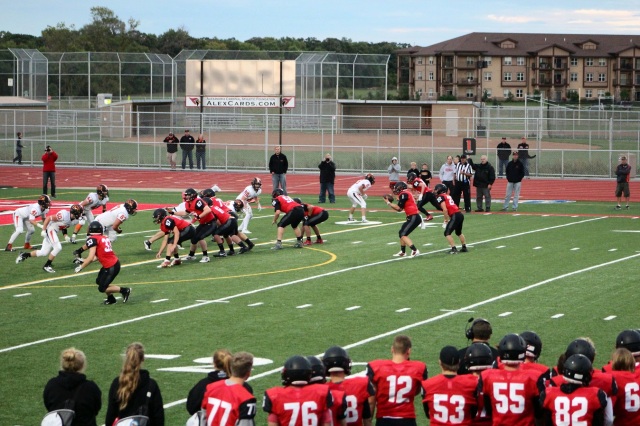 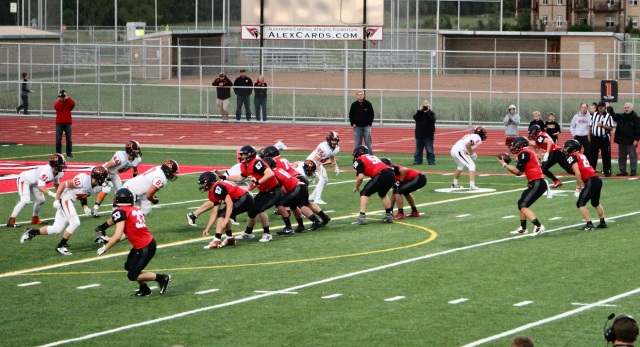 [Another exciting fair catch – this one by Micah.]

[But this was exciting.  Following the long running precept of ‘run to daylight,’ here Micah scores our 2nd touchdown on a 43-yard run.]

[From our vantage, it looked like he was going to be stopped here – but he somehow made it into end zone.] 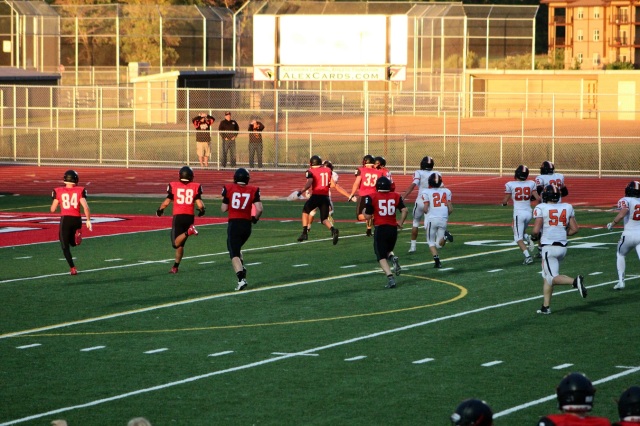 [And that was the 1st quarter score.] 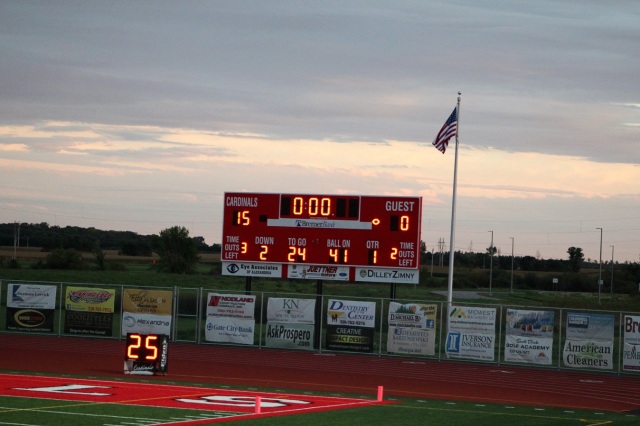 [I don’t recall if this was our first boo-boo, but it looks like it.  Jaran threw a pass toward Spencer – the pass was directed in anticipation of Spencer breaking left.  He broke right, and the pass was intercepted and returned to the Card 5-yard line.  The Spuds scored to make it 15-7.] 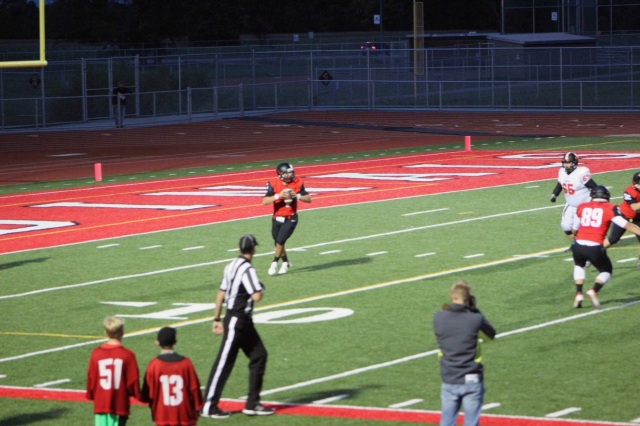 [But late in the half, the Cards recovered a forced fumble on the Spuds 20-yard line.  We scored on the next play, a perfect pass to Spencer in the right corner of the end zone.] 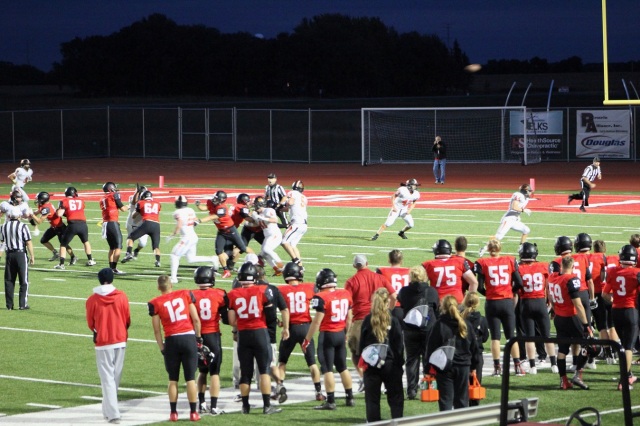 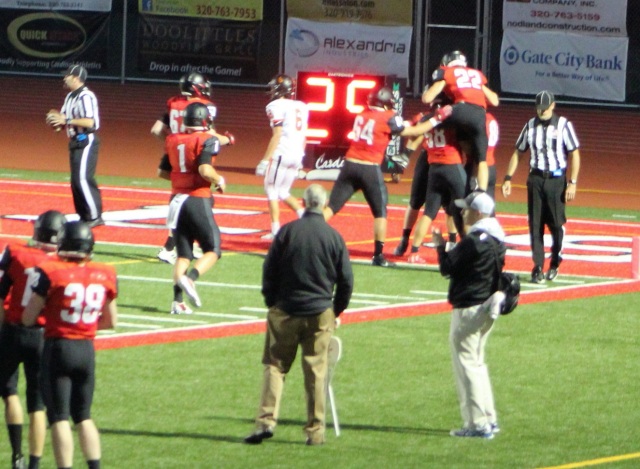 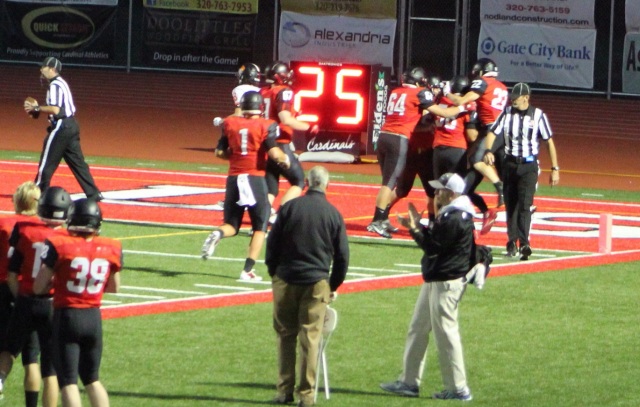 [And the halftime score.] 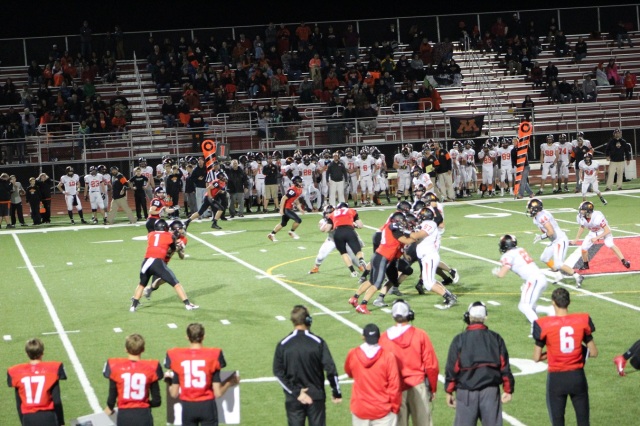 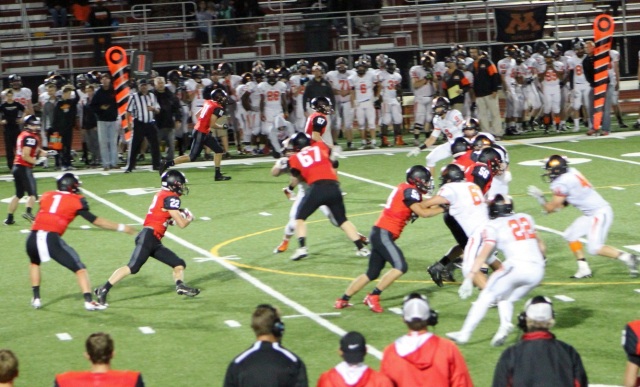 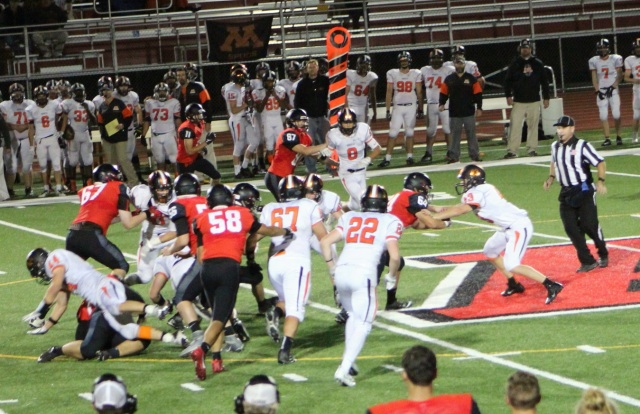 [And ultimately has another nice gain.  Coach Strouth notes his strengh as a runner is his vision – he instinctively knows the right place to go.  And he has terrific balance making him hard to bring down.] 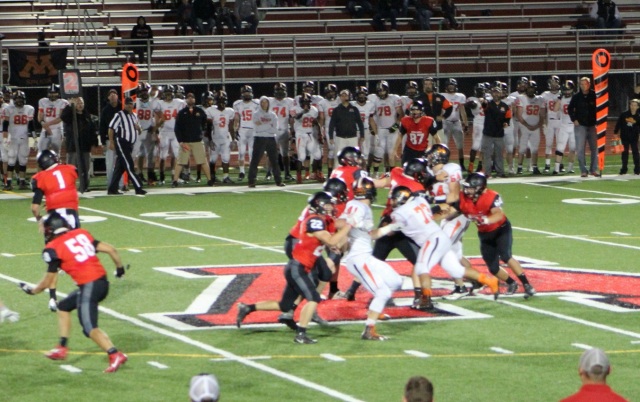 [It may have been on this drive that the Cards scored on the next series after the Spuds scored on their 1st possession of the 2nd half.  It ended with a 16-yard TD pass to Cody in the left corner.]

[Still in the 3rd quarter, a Micah run.] 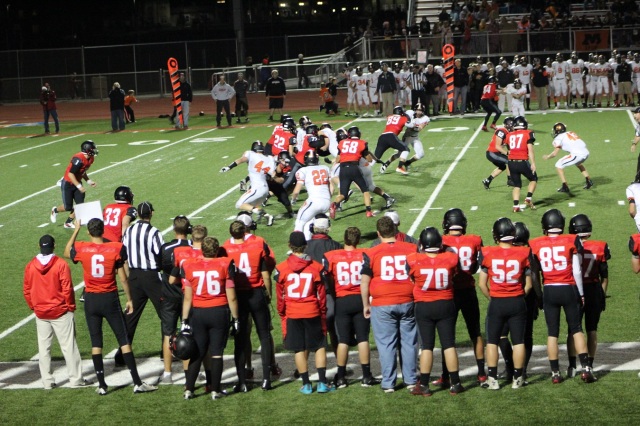 [The Cards last TD, late in the evening and my camera setting was off kilter. This was the best I could do on a nifty 36-yard run by Jaran to wrap up the scoring.]

[A big win and great 2-0 start to the season.  We host Apollo next Friday.]

[If you don’t empty the zipper pocket on your seat cushion on a regular basis, this is what you might find . . . ]

If a man watches three football games in a row, he should be declared legally dead.  ~  Erma Bombeck

Up Next:  Back to Germany?