If you ever appear on a cake, chances are pretty good you did something awesome . . . or were having a birthday.  In this case it was the former for the grandson.  He was graduating from Noblesville, Indiana high school in the top ten percent of his class.  The locale for his graduation par-tay was just a mile or so from the family residence of some 10 years – yet the “Minnesota” setting was a place of first impression for grandma and  grandpa.

[We did not know there was a nearby lake (reservoir).]

[So I was amazed to drive into this setting.] 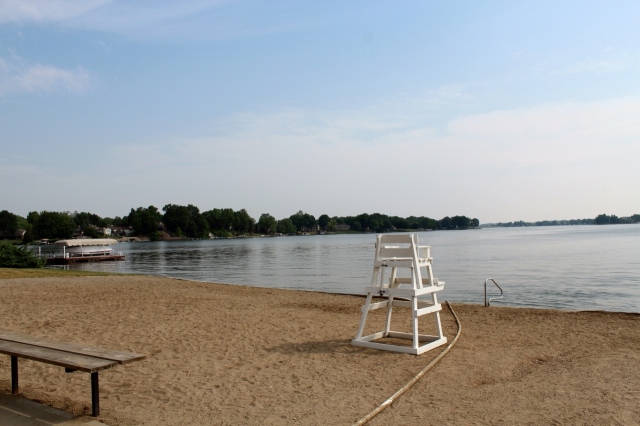 [The place was loverly – though under the auspices of an HOA.]

[It was a 3-guy party – possibly hoping they would attract more girls that way?] 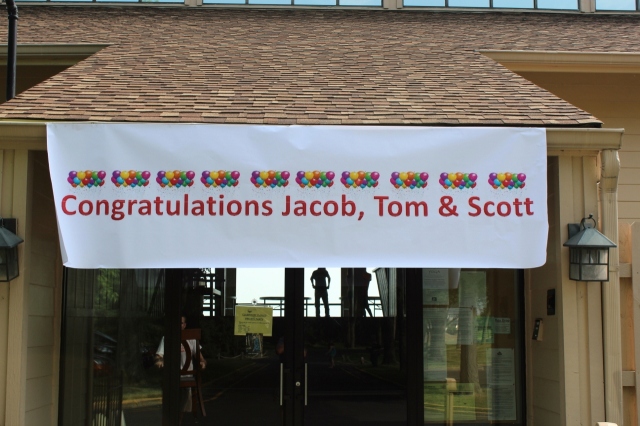 [Tom’s granny Fran appears to be on a mission.]

[Meanwhile, boats start to appear on the lake – a 90+ degree day will do that.] 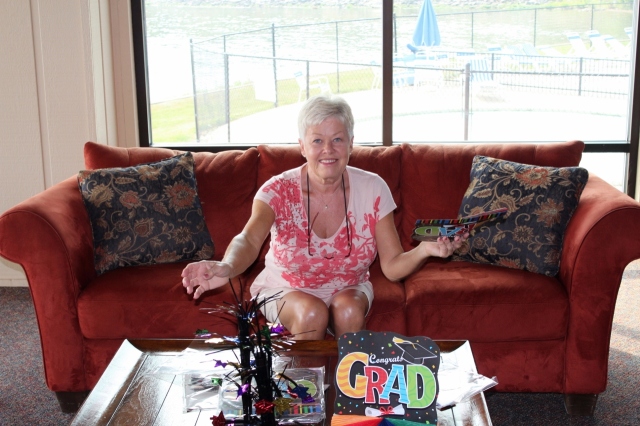 [The centerpieces are done!] 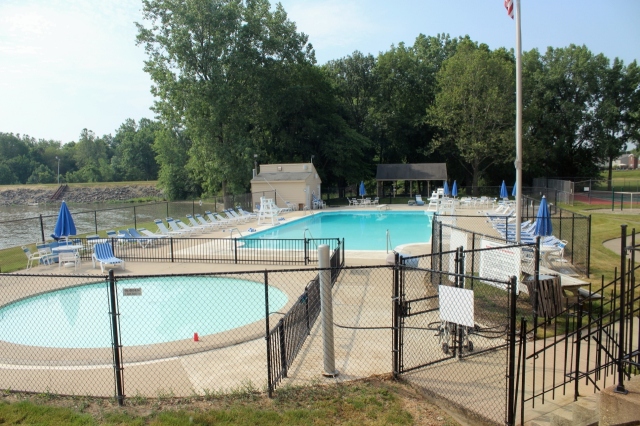 [Jami supervises decorating . . . yes, I was now subject to the whims of TWO SUPERVISORS!!  😉 ]

[Some thought these numbers reflected the graduation date of the honorees.  Others know it relfects the year the members of the class of ’65 turned 65!]

[I will take partial credit for table decorating.] 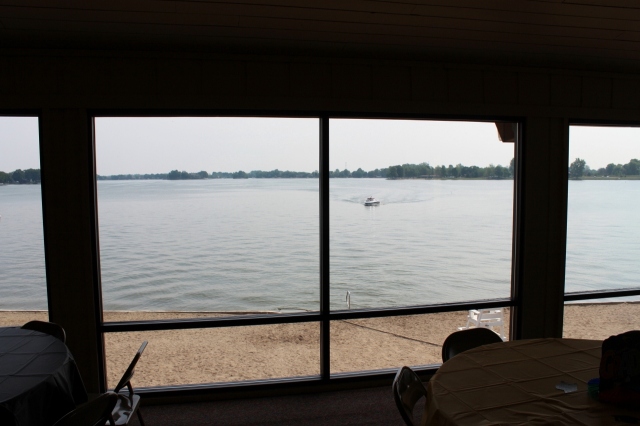 [The SUPERVISORS no doubt plotting a project for me!] 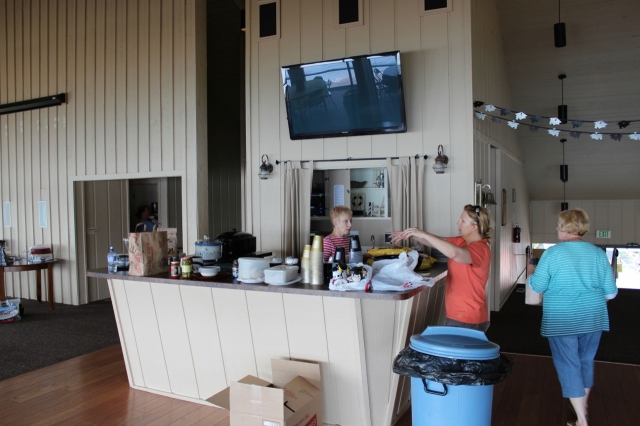 [Grandson and grandma take a break from the action to pose.] 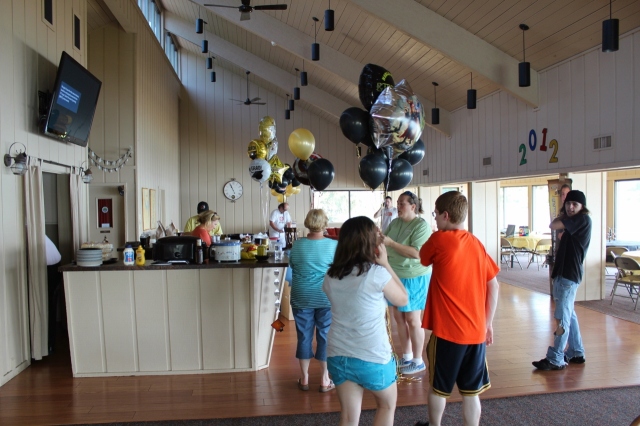 [Grandma, mom, and grandma supervising the balloons.  Tom’s slideshow on the big screen.] 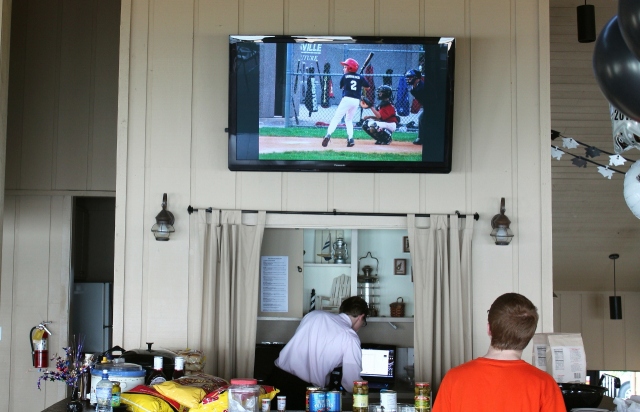 [Tom at bat above and engineering the system below.]

[Tom as we remember him through his tweens and early teens.  Next, he’ll be designing the things!  🙂 ] 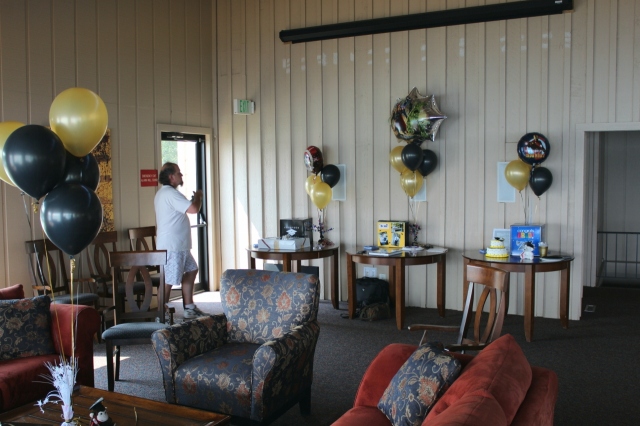 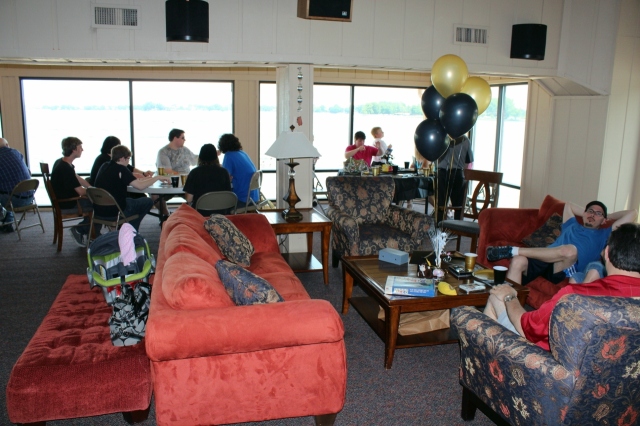 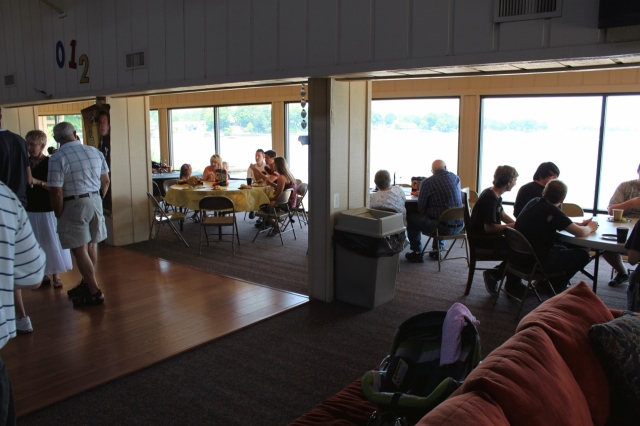 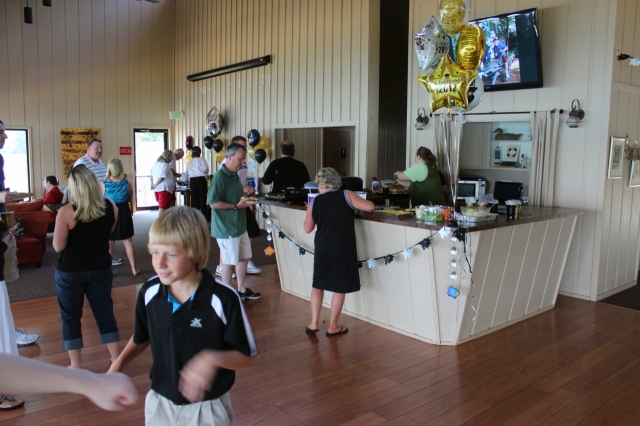 [Grandpa Ed is instructing the young man in the foreground about the game of golf.  He’s shooting in the low 40’s for 9 already.]

[The supervisor was delighted to see her son Rob.]

[Reservoir action was picking up.  In fact it got quite choppy out there – and would have been a violation of wake rules on beautiful Lake Darling!  😉 ] 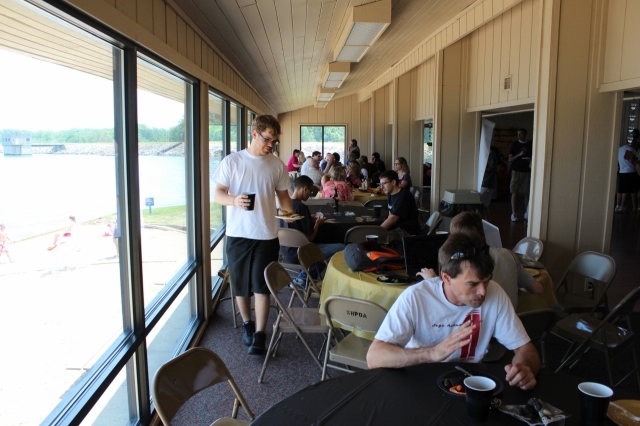 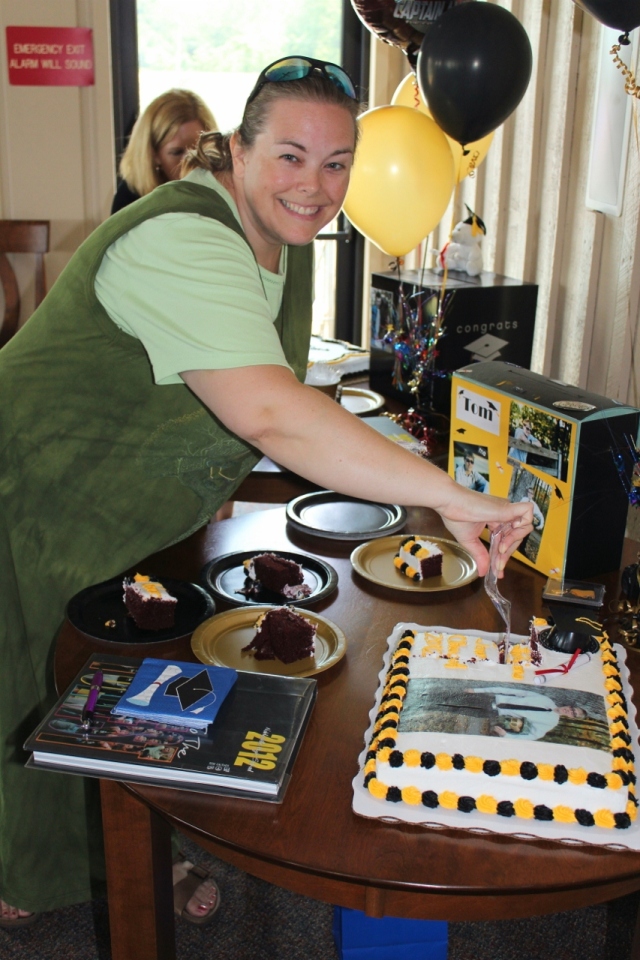 [Jami’s announcement of “eat up” draws a round of applause.] 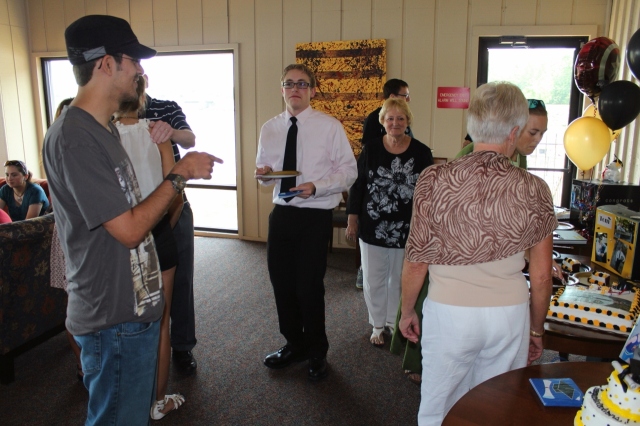 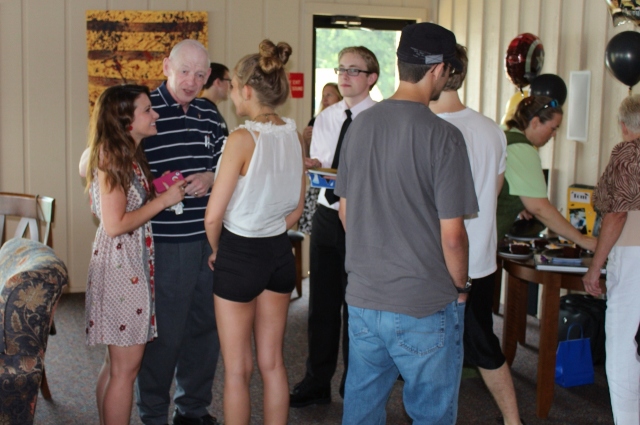 [And Jami was worried that the guys hadn’t invited any girls.] 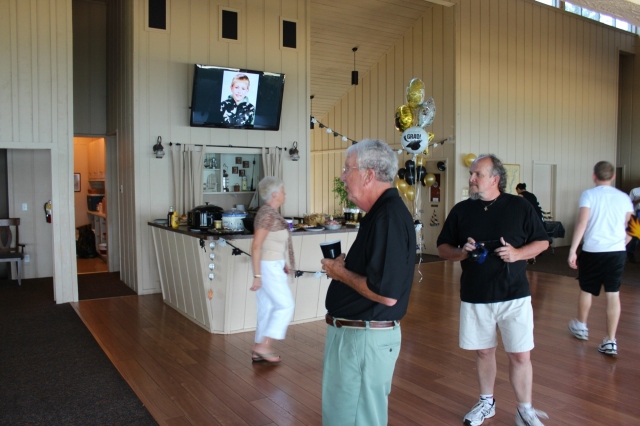 [The supervisor, Grandpa Ed, and Danny monitor the goings-on.]

[Uncle Rob and an assortment of Tom’s grandparents.]

[Tucking in her kids.]

[Under-the-curtain shot of Rob and Jami.] 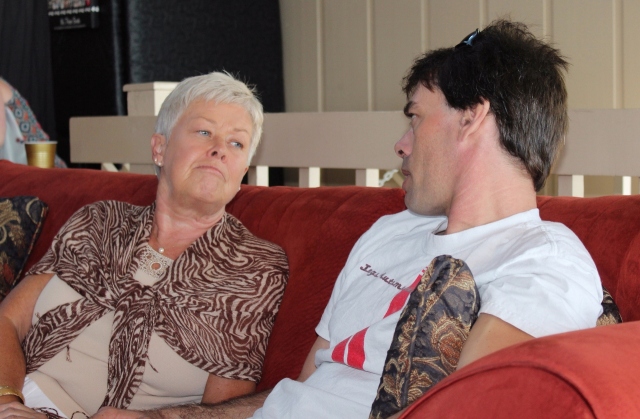 [And Jami was worried that the guys hadn’t invited any girls, Part II.]

[The supervisor visits with Tom’s physics teacher.  He appreciated Tom so much he considered him to be his TA!  🙂  ]

[The Biddies note the community play in which Tom had a starring role.]

[The supervisor with her boys – grandson Tom and son Rob.  She calls them the “Eyelashes Twins.”]

[At least Tom won’t have to change school colors – both Noblesville and Purdue are black and gold.] 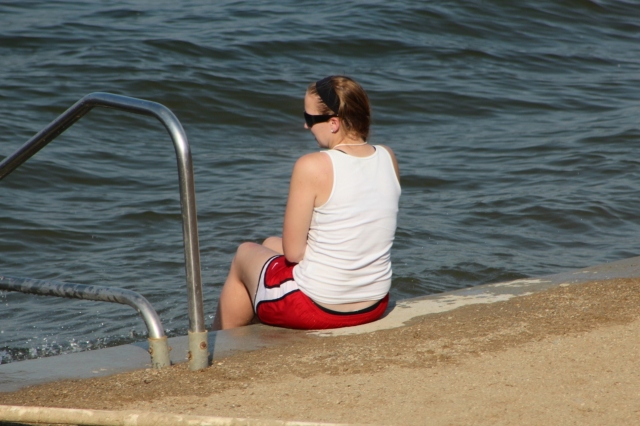 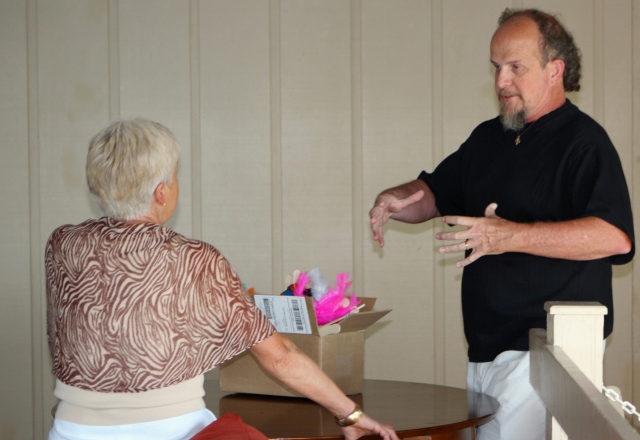