We can call it that because you know it didn’t go smoothly . . . 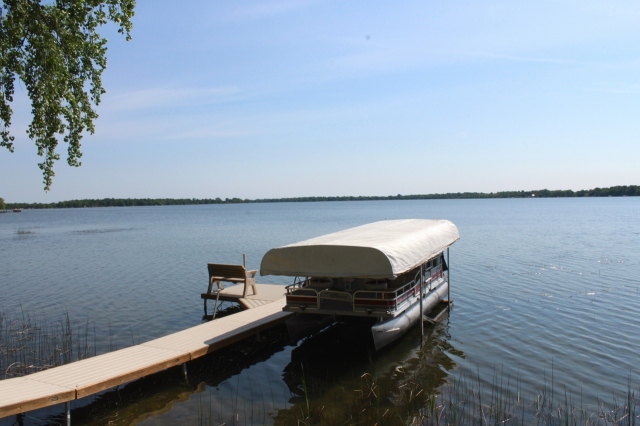 [But before we left, beautiful Lake Darling was . . . well, beautiful.]

“The trip,” or any trip now, is accompanied by the notebook computer, a relatively recent addition to the blog hardware.  For many years the laptop alone performed yeoman service, and when at home, it’s still the weapon of choice.  But the notebook has advantages in size, speed, and capacity – and I’m still learning how to work it.  At home, the notebook (foreground) is used for uploads and downloads, the laptop (background) is used for assembly, and the supervisor’s desktop (solo photo) is now used for composition.  On the road, this is my first attempt at using the notebook for everything – it’s probably about time to do so. 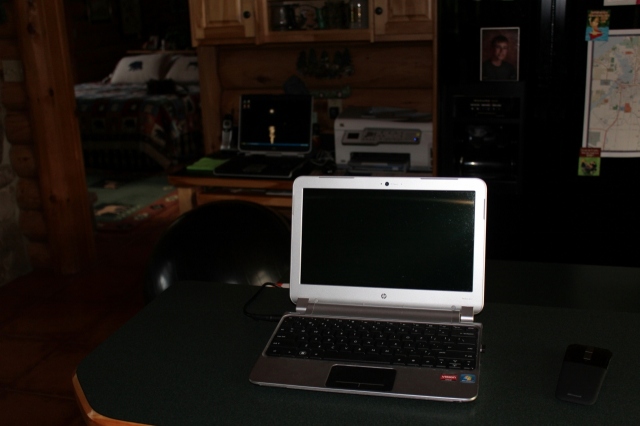 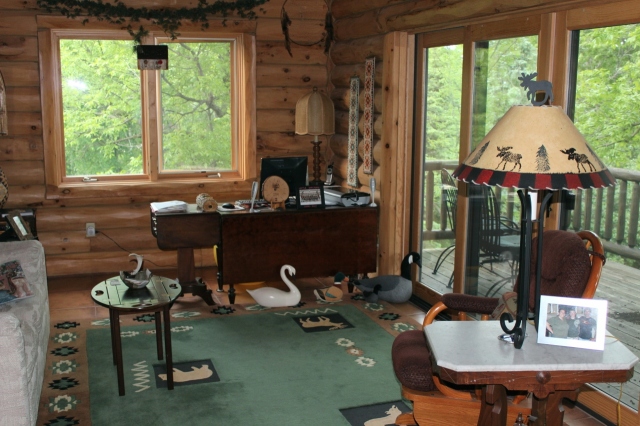 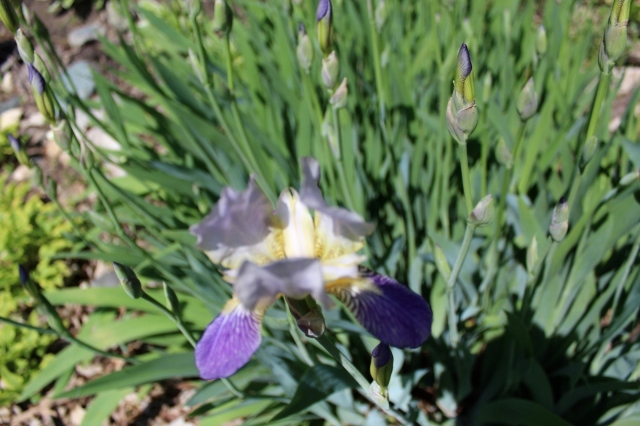 [Now, back to the lake, a few days before we left, the annual Moby Obie spider spraying and cleaning day – who knows when we’ll actually take it out?] 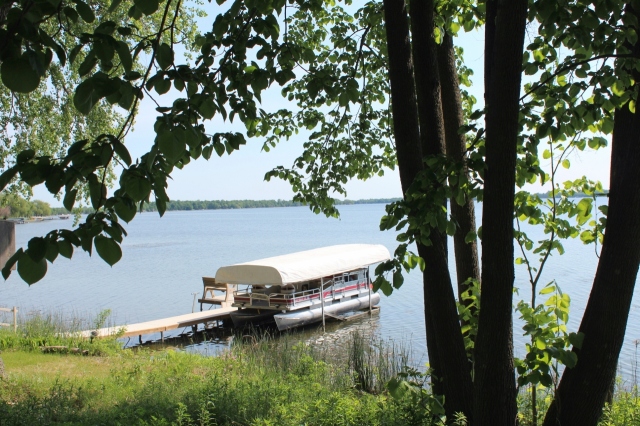 A few days later, it was time to hit the road . . .  It was Memorial Day weekend, and as we approached our destination, it was Indy 500 weekend.  We zoomed through Minnesota, and the Cities, with no delays.  Then we hit Wisconsin where, it appears, everyone hits deer.  We don’t know why they even have a deer hunting season in Wisconsin – you can find all the venison you would ever want or need on the shoulders of I-94 from the Minnesota border to Madison.  Never fails – drives the supervisor crazy (“If only I could save and rehabilitate them!”).

Chicago, of course, is always a challenge – even in the best of times.  I want the orange traffic barrel contract for highway construction in Illinois – there must have been a gazillion of them, and they were border to border!  It was only mid-afternoon so we thought we could make through the city on I-290/294.  We were later advised – always take the skyway!!!  It was impossible – we tried to make it all the way to I-65 in Indiana but finally looked for an alternative.  We turned off on US 41 – out of the frying pan, into the fire, as it also was under construction with only one lane available.  We eventually made it to I-65 but were now well over an hour off the usual trip time. 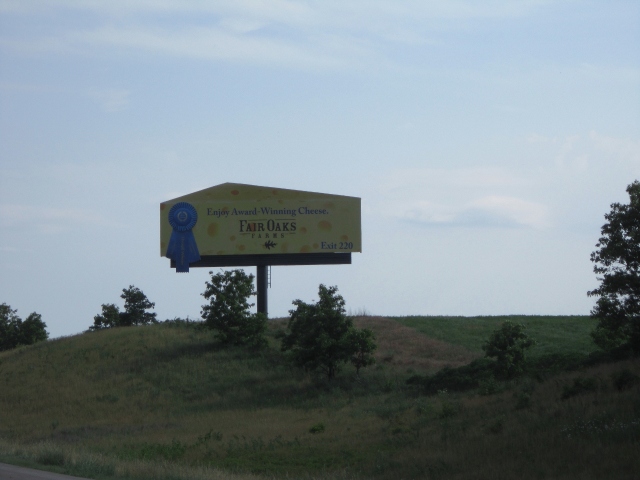 We made it to Exit 220, not that far down the road, where Fair Oaks Farms, a gigantic dairy farm (famed on YouTube), is located.  I-65, on the way to Indianapolis, came to a dead stop.  We finally decided to take the shoulder to the exit and take back roads in.  When we crossed over the interstate, we noticed people were out of their cars, just standing there with their doors open.  It must have been a really bad accident. 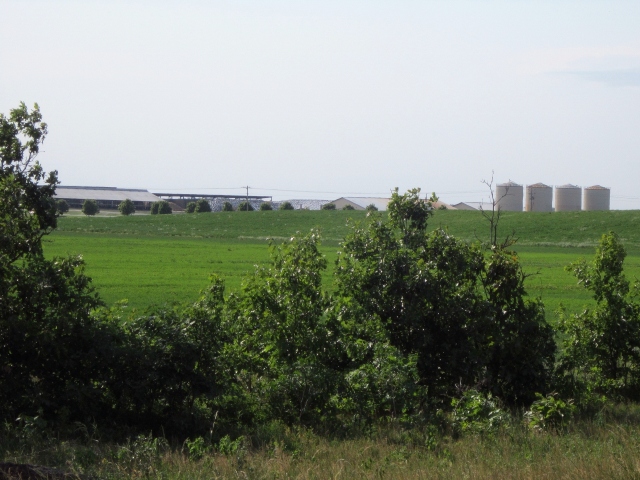 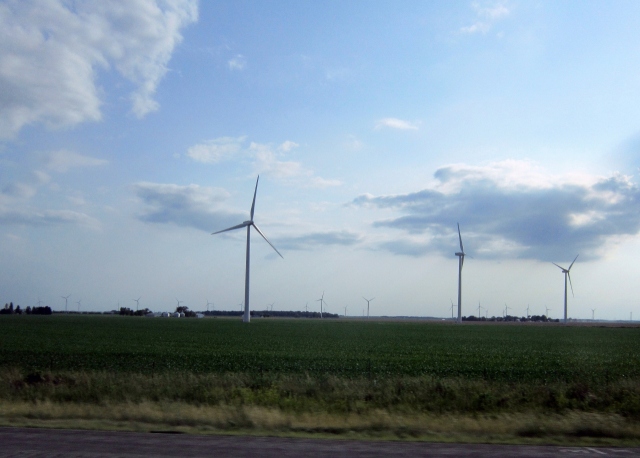 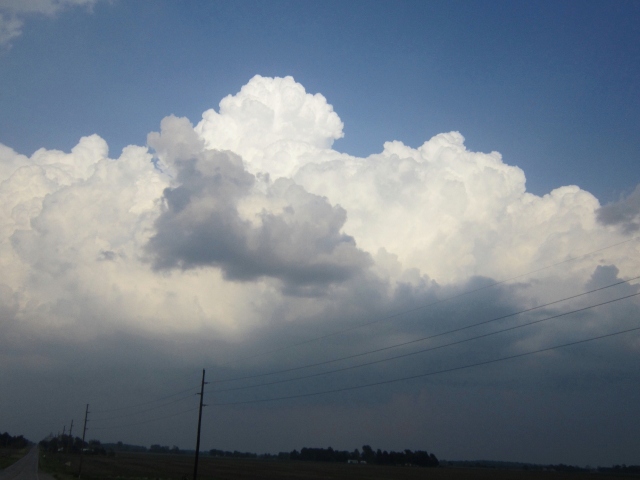 [It hadn’t rained in Central Indiana since ‘Ought-8, but we brought it with us!] 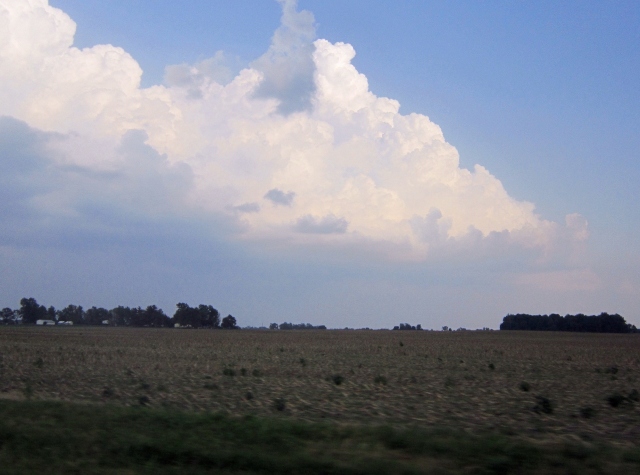 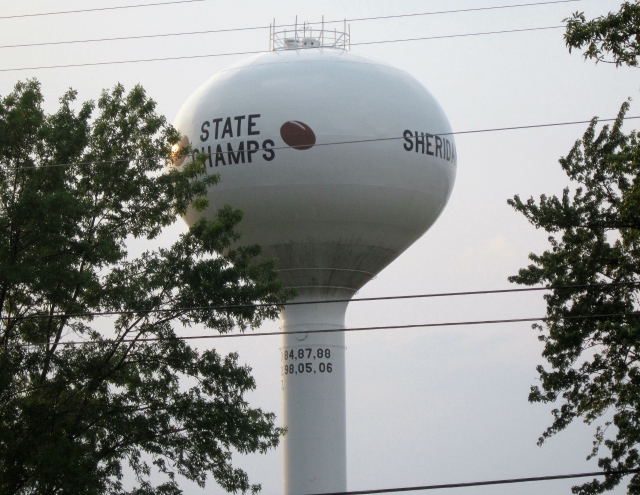 [We take two-lane roads cross-country to Noblesville, which is 20 miles north of Indianapolis.  We usually stop at a Subway in Sheridan (across the street from the water tower) for a quick repast along the way – it seems we always get a quick thunderstorm there!]

In Noblesville the next morning, Tom and Grandma Ruth drove off to buy him a graduation suit: 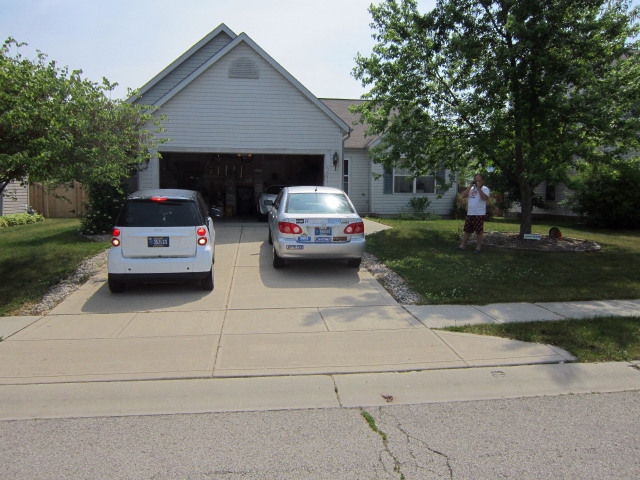 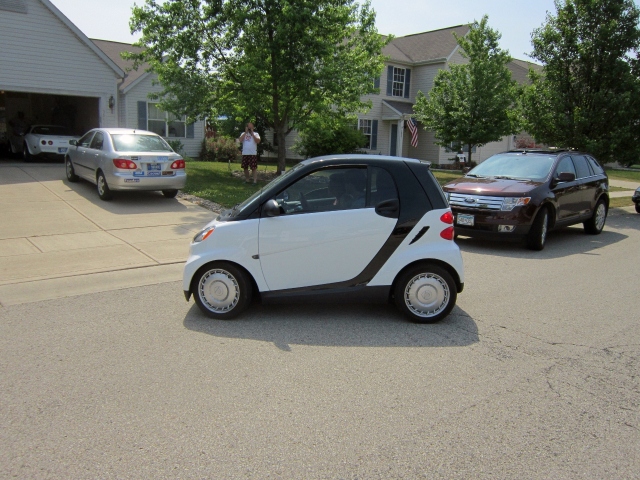 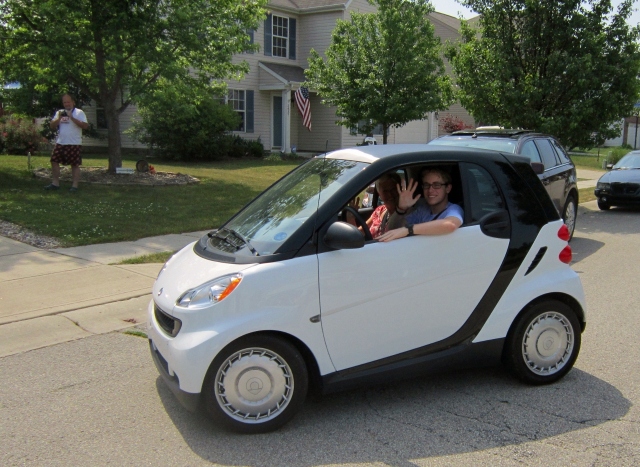 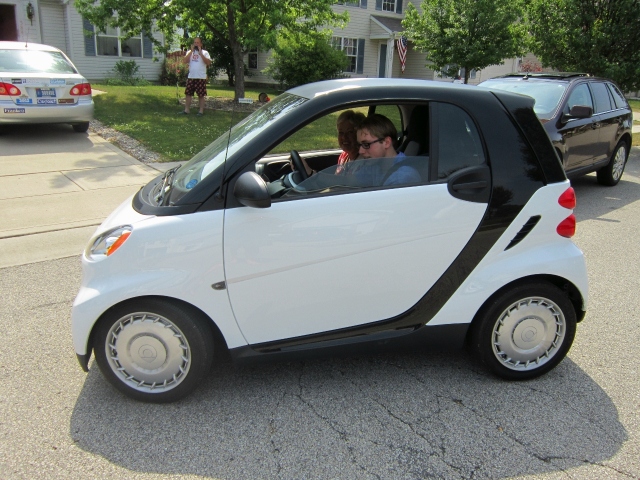 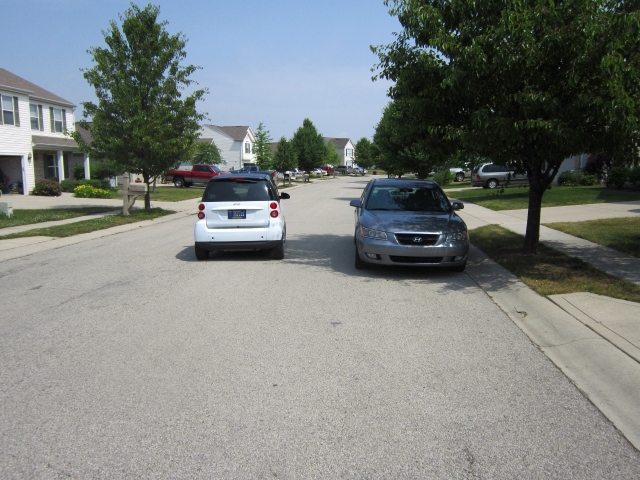 Oh, and Olivia Newton-John was the grand marshal for the Indy 500 parade that day.  She is just sllightly more than one-year younger than this correspondent.  Where did I go wrong? 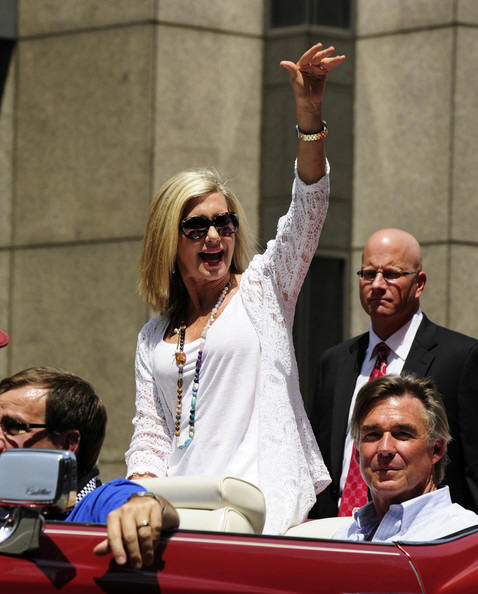 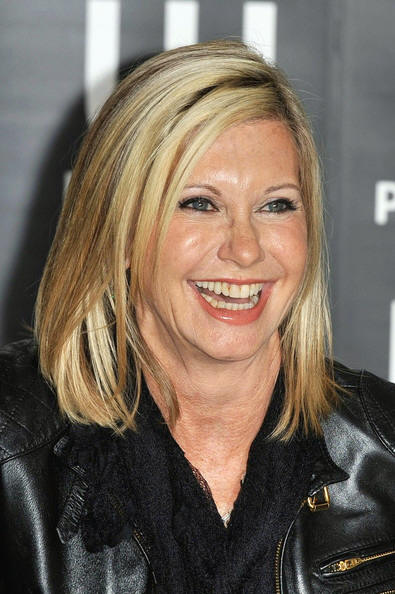 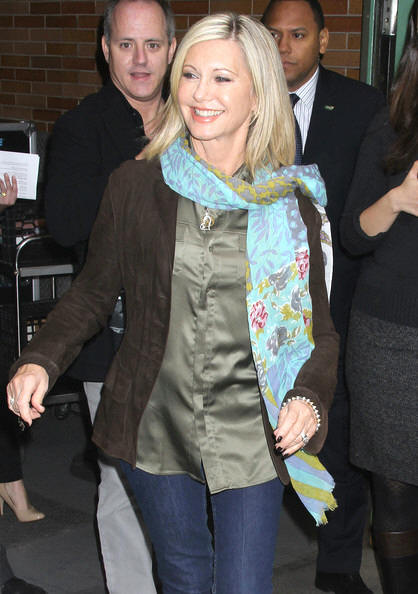 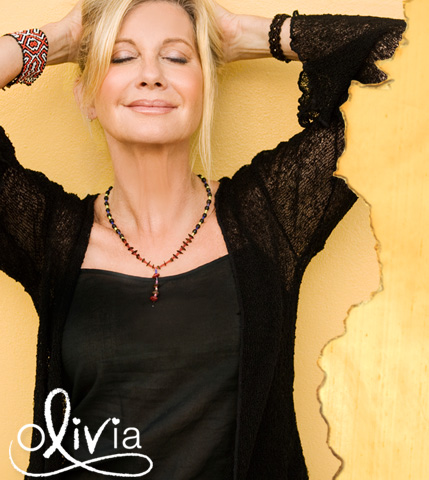 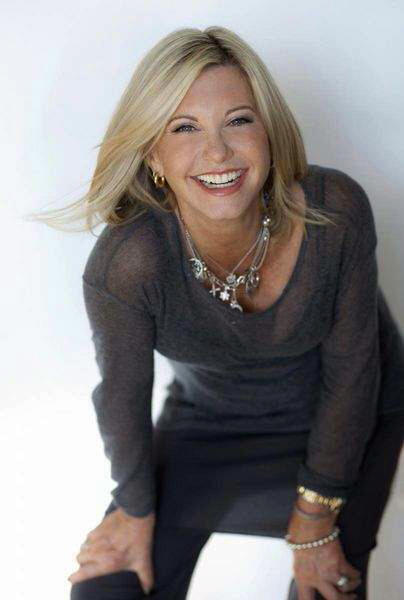 [I think the guys of my generation thought her cute – but who remembers?]