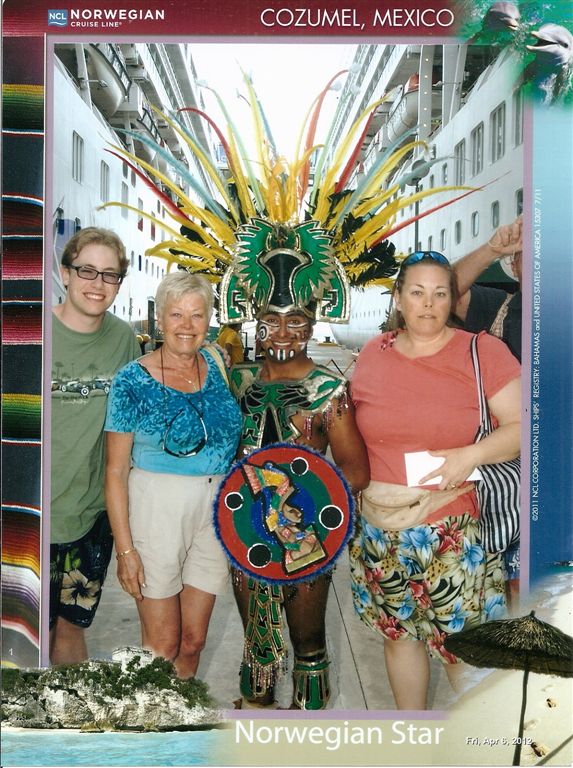 Last stop – Cozumel.  Probably the most well-known stop on the trip.  In this part of the Caribbean, Cancun is probably the biggest tourist destination – with Cozumel right behind.  The supervisor had issues with our debarkation photo (above).  Because I have this habit of “shooting the shooter,” I was cropped out of the family photo as someone obviously not part of the party at issue!  The supervisor raised a stink, so I believe the one below was included at no additional charge.  And that one included a little more of me – but cropped out Tom!  Uffda!

[Our first sighting of Cozumel.  The locals pronounce it with a long “o,” but the tourists still said “cause-ah-mel” most of the time.] 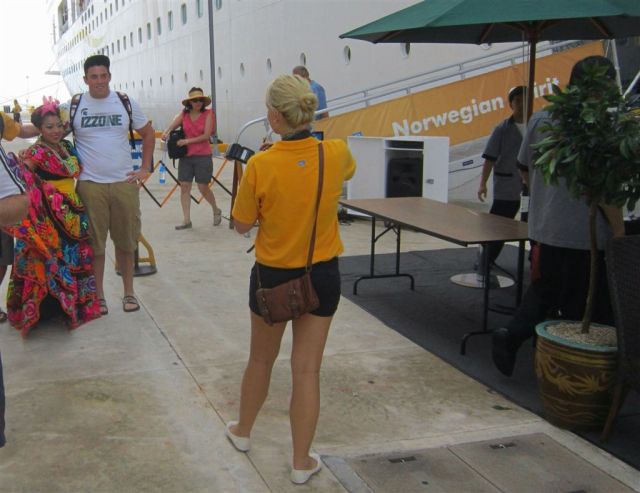 [Sometimes there is good reason for “shooting the shooter.”  😉  ] 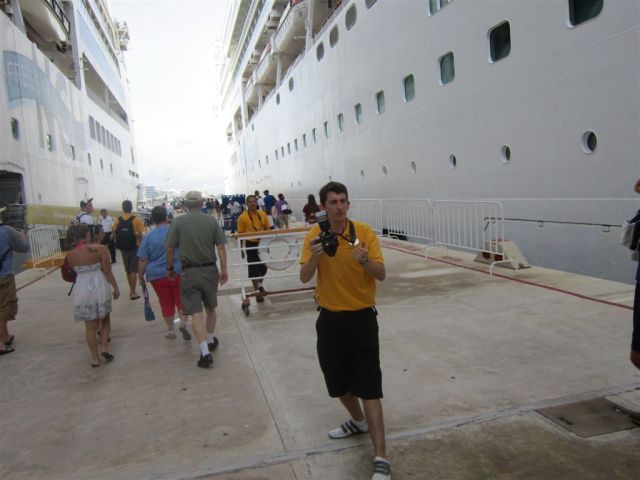 [Ruthie and Jami taking advantage of the supervisor’s handicap status!  🙂  ]

[Kinda felt like walking down a street on Manhattan.] 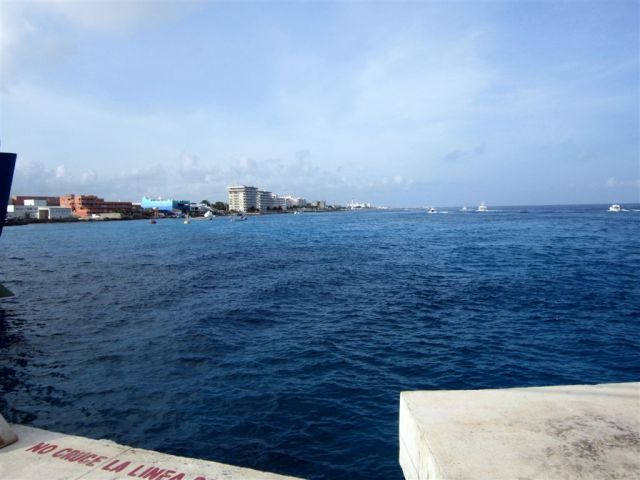 [This all exists just for tourism.] 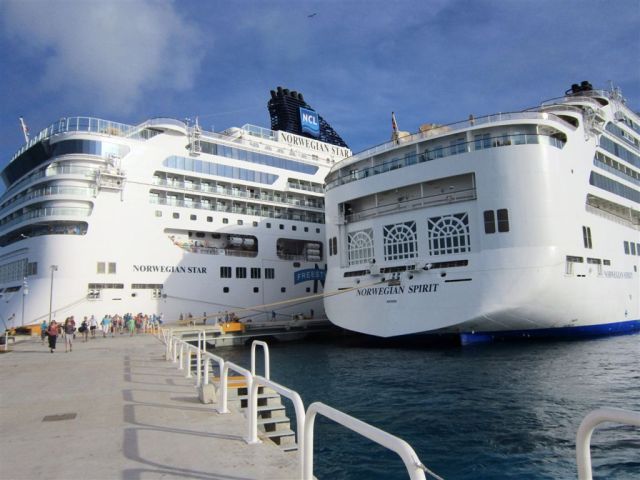 [Family reunion for the ships – we’re the Star.]

[Taking care of Mom’s bad foot as we gathered for our tour of Mayan ruins at San Gervasio.  Do not know the Corey Pavin look-a-like on the right.] 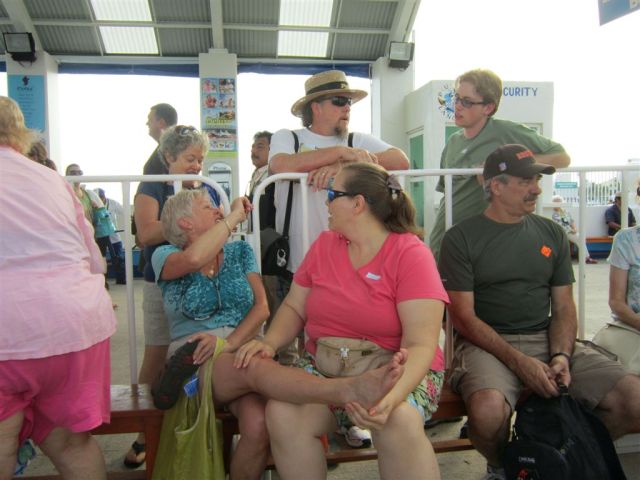 [Rita joins us from points unknown.]

[On the bus with our tour guide (and I’m sure someone from our party will remember his name?)  You have to get the equivalent of a 3-year college degree to qualify for these tour guide jobs.  He was entertaining and informative.]

[Like any good ruin anywhere, first you have to navigate the commercial entry area.  Buy stuff!  Cozumel is noted for its black coral – and though it is obviously protected, divers can harvest coral that has broken off from natural causes, i.e., storms.  I’m not sure how they monitor that.  The supervisor did buy some jewelry here, as I recall, but it did not contain black coral.] 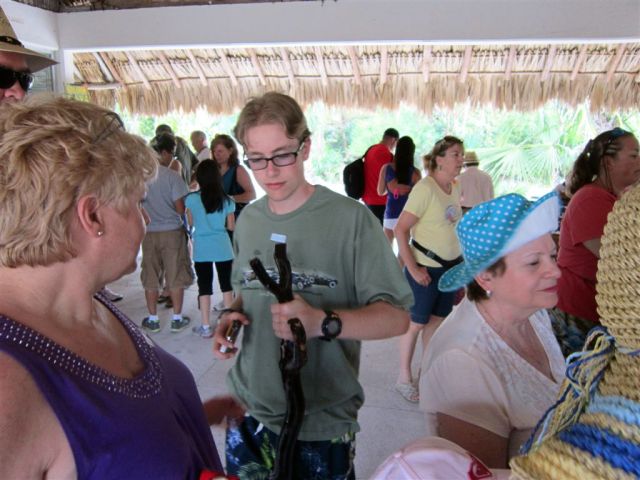 [Here we go, people.  Stay with your group.  Watch your footing.  Stand in the shade when you can.  Hydrate!  Try not to faint or otherwise pass out – that goes especially for you folks from northern climes!] 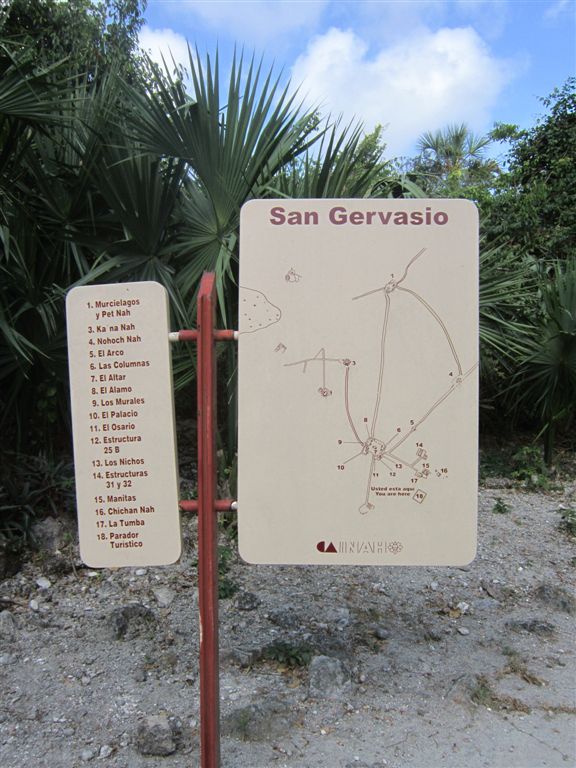 [The big Mayan ruins are at Tulum, but that’s an all-day tour.  As we will see, we also wanted to hit the beach on this day.] 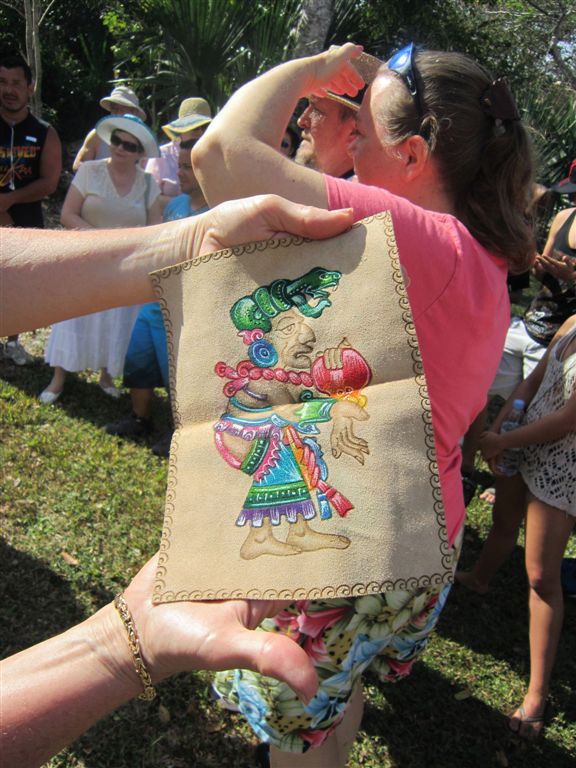 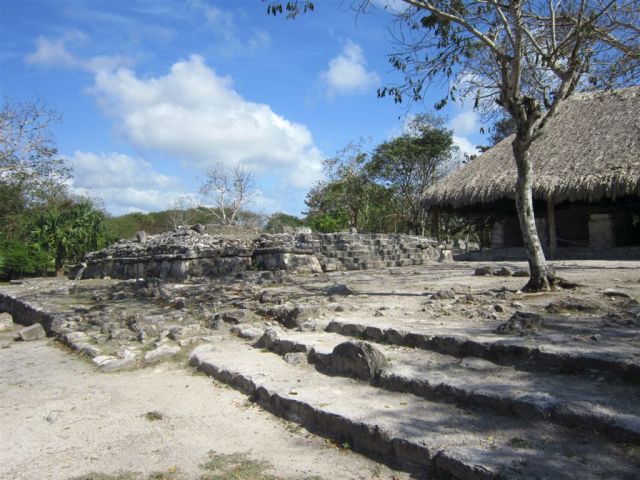 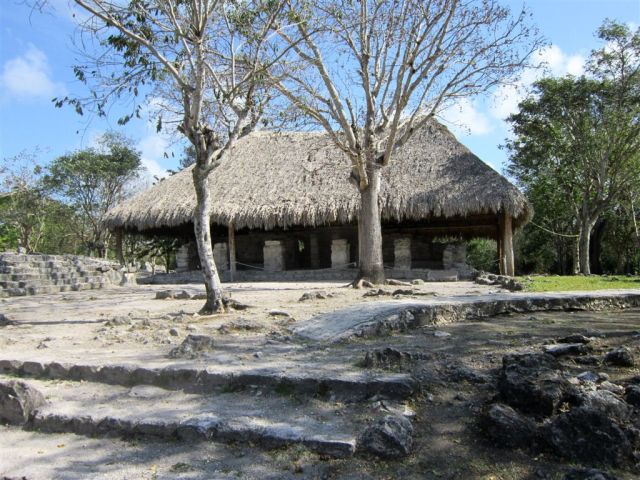 [Jami negotiates the steps.  If you’ve ever been to ancient ruins,  you know that the steps are always narrow and steep.  As I recall the reason for that is that it you had to climb sideways using a switchback approach – and then the monument required a smaller footprint.  OK, I don’t really recall why?  Jami?  (Editor’s note:  The supervisor has subsequently advised that if you have to walk up and down sideways, you neither face the god directly, nor turn your back on her.  And how could I not know that?)]

[The supervisor takes a load off.  Probably tried to woo a myriad of iquanas to her for a visit.]

[As you’ve all learned from hours in front of the TV watching PBS, the Mayans had a very sophisticated culture.  They were very learned in astronomy, and their architectural designs and lay-outs were based on the 28-day lunar cycle.  Thus, their moon god trumped their sun god has the head honcho.] 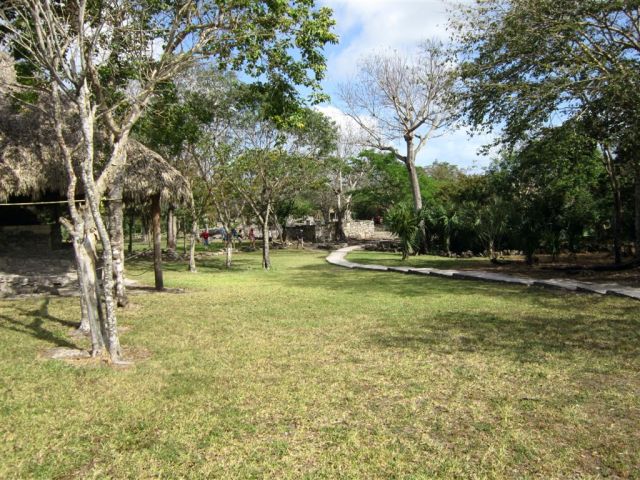 [As I recall, this is the place where your worthiness for marriage was tested.  A fire was built in the slot on the right, the prospective spouses individually had to spend some ridiculously long period of time in the “sweat box” in the middle.  I think “I’ll just remain a swinging single” would have the slogan of the day.  Of course, I may be wrong about all of this (though I do remember that fire part!).]

[Just to the right and south of center, a striking black and red butterfly.  There were several around these plants.]

[A green iquana.  Again, not the nightclub on Lake Reno.]

[There are 7 tiers on each side to the top of the arch.  There are, of course, the same number on the other side.  Total them all up – 28!  There’s the lunar cycle again.]

[“Don’t climb.”  Because you know someone otherwise would.] 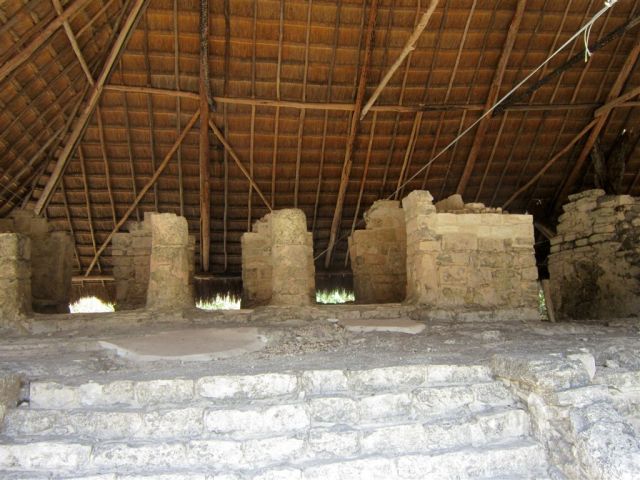 [Another iquana.  They are, of course, edible – unless you’re a vegan.  Our guide was asked how is it prepared?  And – no kidding – he said just like chicken.  Everything you’ve never eaten in life tastes like – and is prepared like – chicken!  😉  ] 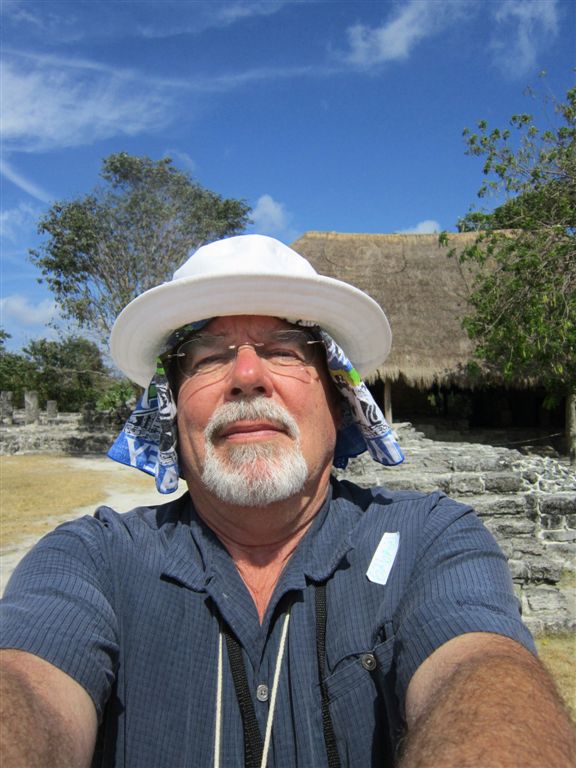 [I found another use for my Bob Marley bandana.  I was sweating like a stuffed iquana.  Like they say, it’s not the heat, it’s the humidity!] 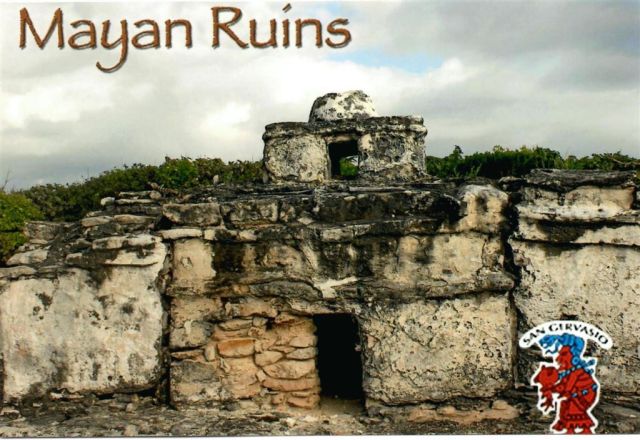 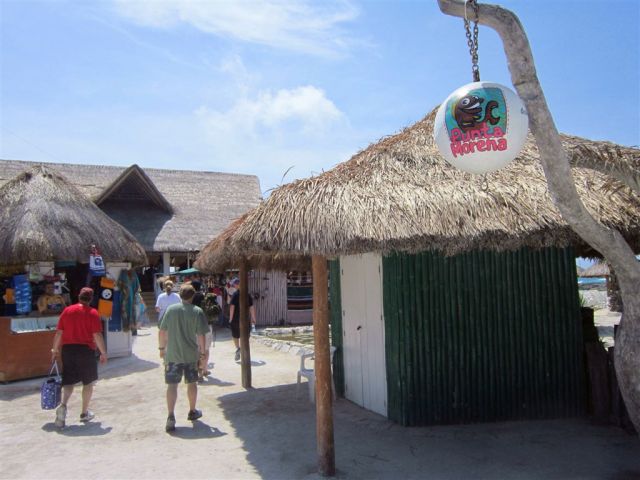 [Then it was on to the beach on the far side of the island.  The guide asked if anyone knew why there were no tall buildings on this side.  Our brilliant grandson answered immediately, “Hurricanes.”] 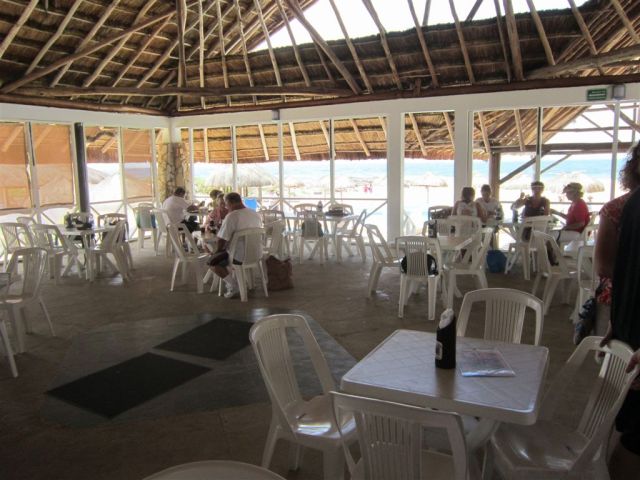 [We had a Mexican buffet (who’da thunk?) for lunch.]

[Should be available at any eating establishment!  🙂  ] 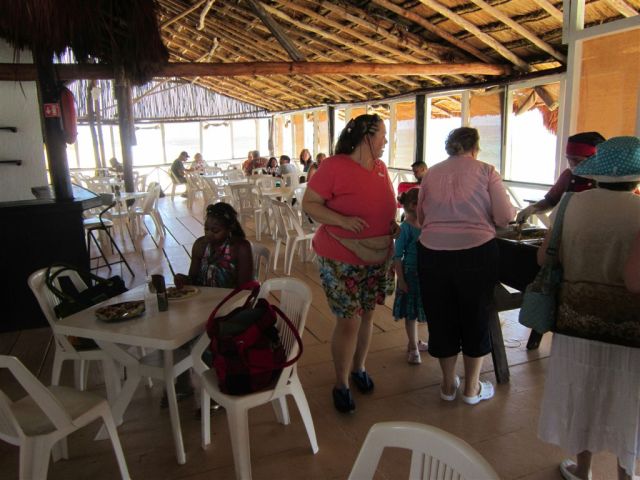 [The view from our table was reasonable.] 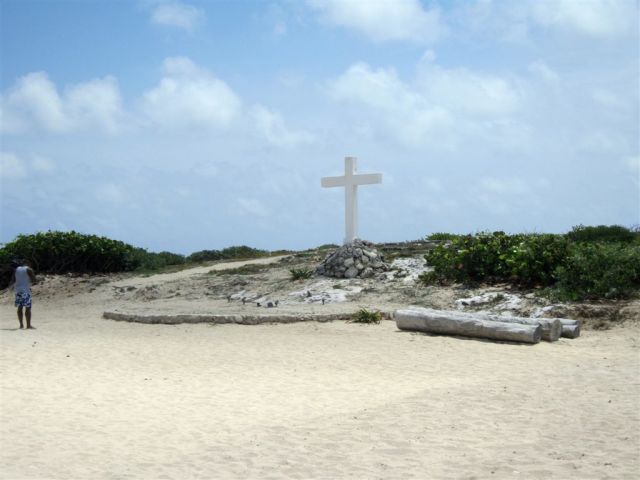 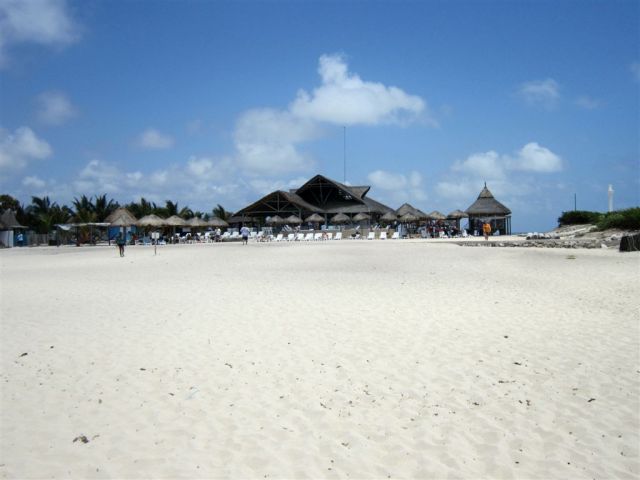 [The sand was pretty – but it was deep and a hard slog to the beach.]

[Tidal pools made wading an adventure.]

[The supervisor did join her grandson out in the breakers.]

[The supervisor’s had enough.]

[Loved my perspective from here.  And the conveyance in which I’m perched almost became my second purchase of the trip – after the bandana.] 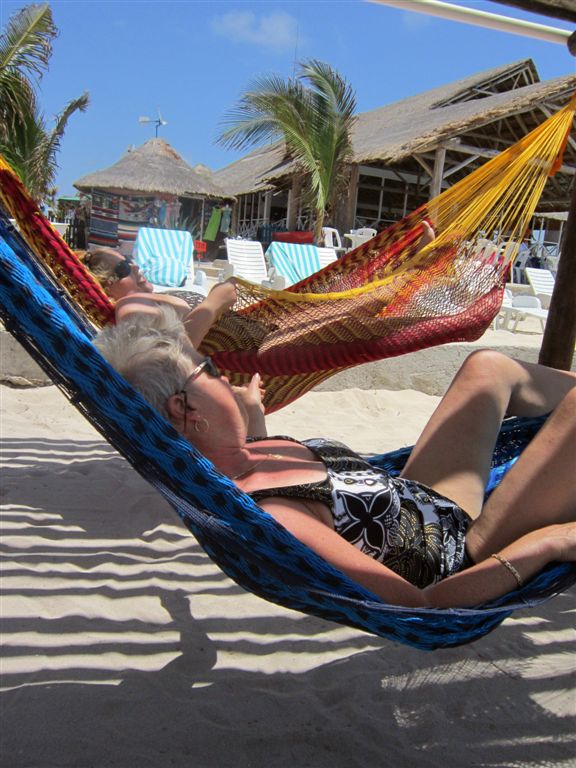 [Aforementioned conveyance – a swinging hammock.  The girls were swinging and talking about the ship’s Dancing With the Stars show from the previous night.  They said the runner-up should have won.  The woman on the hammock next to Ruthie started laughing – she was the runner-up!  🙂  ] 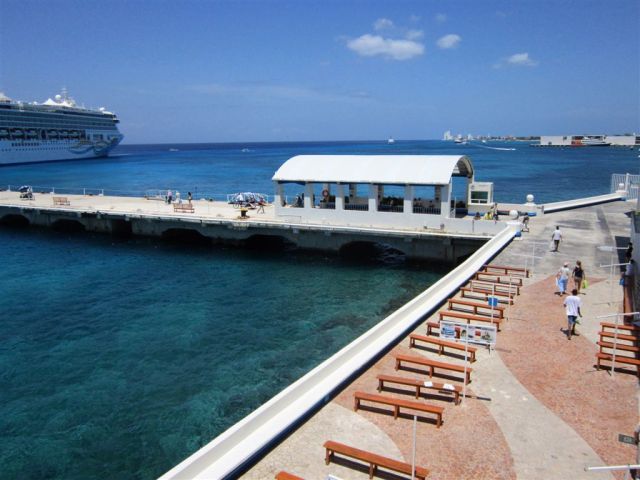 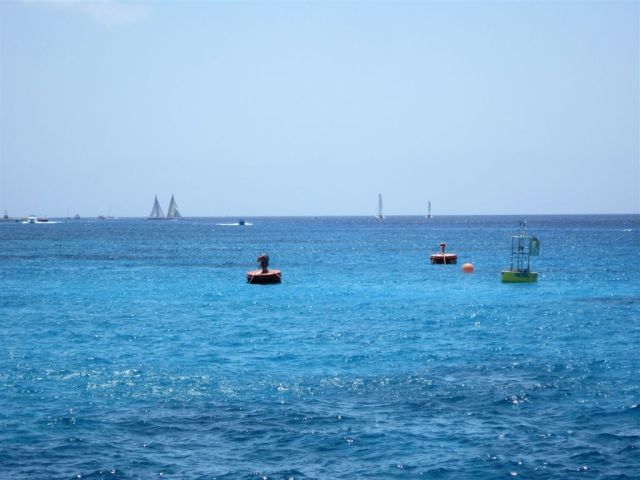 [Water at the dock – unbelievably clear.] 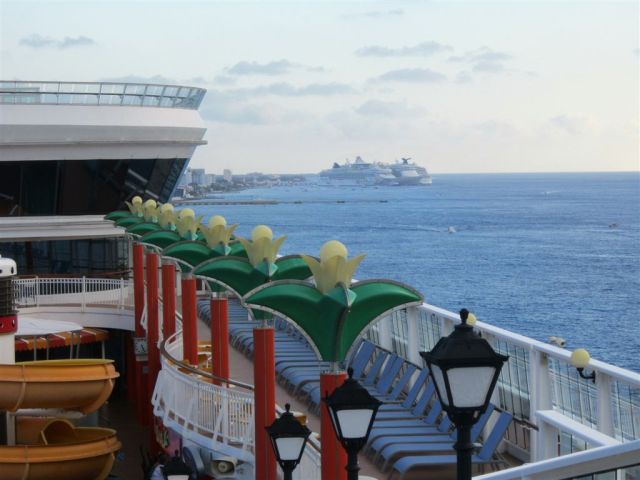 [The Biddies reminisce about the cruise as we head back to Tampa.] 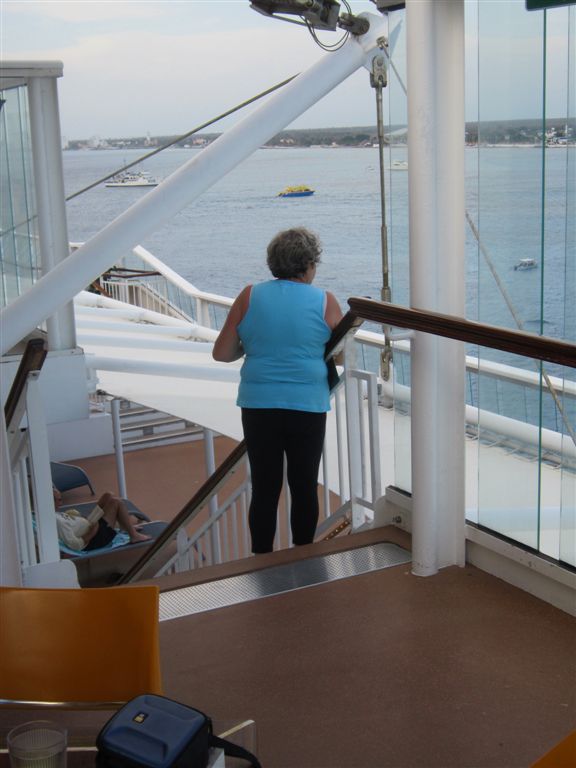 [Rita dreams of summer cruising on the Moby Obie.] 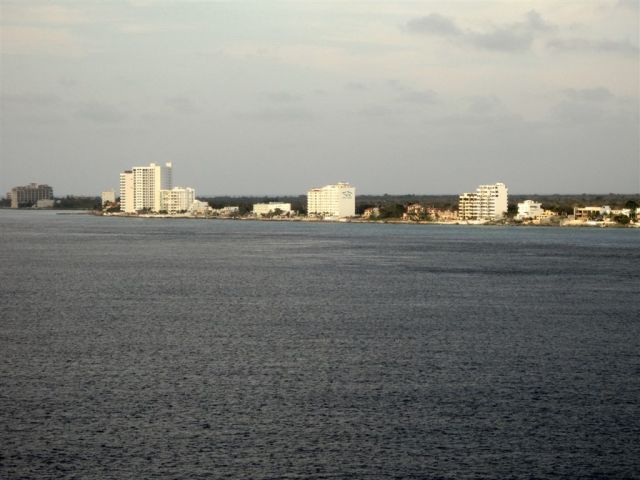 [Cozumel resorts and condos – to the best of my knowledge.]

[Seeking last minute cruise photos.  We had to laugh at two teenage sisters from Montreal who kept coming back for more photos in different outfits.  They were part of our people watching.  It was spring break, so there were a lot of teenagers on board.  Girls in gaggles of 3 or 4 would circle the boat’s interior at high rates of speed obviously intent on getting somewhere in a hurry – in their wake came pods of boys, with size 14 feet, following with no apparent understanding as to why.  Of course, the kids undoubtedly said the same thing about an elderly man who followed three mature women around the boat with a perpetually confused look on his face.] 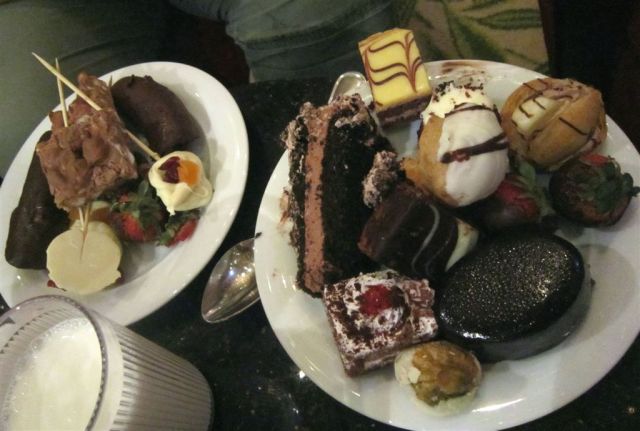 [It was chocolate night on the ship – just in case your calorie intake had been running a tad low.  These were the kids’ plates.  Rita got one plate for the three of us – it lasted into the following morning.]

[Good night – tomorrow will be our last day on ship.]