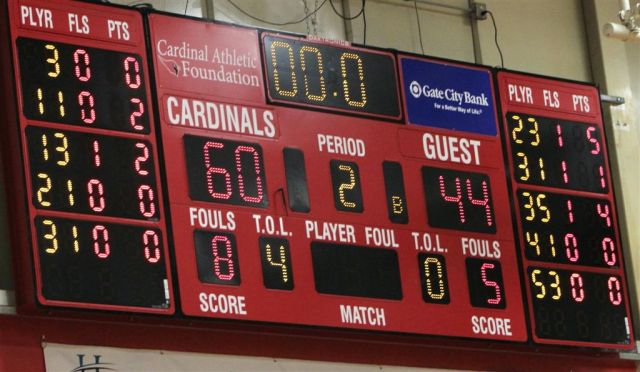 Big night for our Cardinals.  All our teams won.  The boys’ hockey and basketball teams won their first games of the season (they are both now 1-2) – the hockey team beat Willmar 2-1 at home; and the basketball team won 41-33 at Sartell.  The girls’ hockey team beat Willmar 3-2 at the RCC.  The scoreboard tells the tale of our on-site coverage of the girls’ basketball game.  As previously noted, we were in a quandary as to whether to attend the girls’ basketball or girls’ hockey game – they both played at the same time.  Since we were assured we had Super Fan coverage at the hockey game, we decided on the pum’kin pusher (Marnee’s term) game – plus, the gym is a lot closer to Culver’s for buck burger week!  🙂  The photo of “Old Squint” on the left was captured by the staff photographer, as I recall without written permission!

[p.s.  I have to report the supervisor was not happy with our choice of venue after we got there.  The gym was hot, as usual, and after the JV games, they could not “deploy” the southside bleachers because they couldn’t raise the baskets on that court!  (The new school can’t come fast enough!)  And it was also the first show of the band – so all the fans and the band were in the north bleachers making the gym even hotter!  They eventually were able to get about 4 rows of beachers out on the southside, so we moved over there – but we were a long way from the action.  At game’s end, the supervisor almost knocked me over in her rush to get outside to cool temperatures!  😉  ]

Super Fan Roger Riley sang the National Anthem at the hockey game again.  Reports from stringers indicate the team played very well.  Danielle Carlson scored our first goal, and Shelby Iverson got the next two.  As usual, the team had a 2 to 1 shots on goal advantage. 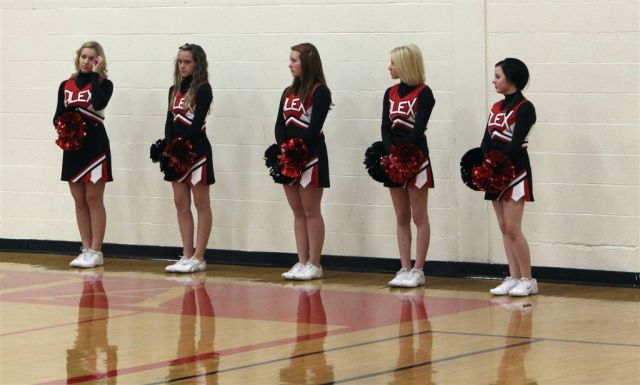 To the basketball game.  We were playing Sauk Centre, the No. 2 ranked team in the state in Class AA.  Unfortunately for the Mainstreeters (yes, for Sinclair Lewis) and basketball fans, their star player is out with a knee injury (she will be playing for Iowa next year).  Nevertheless, we heard their team would still be pretty good.  And they were.  They had a good point guard who played Lauren very tough defensively – and their center had good scoring moves and could shoot from distance.  But it’s tough for any team to deal with our 1-3-1 defense, especially with Lauren at the point.  It leads to a lot of easy points off turnovers. 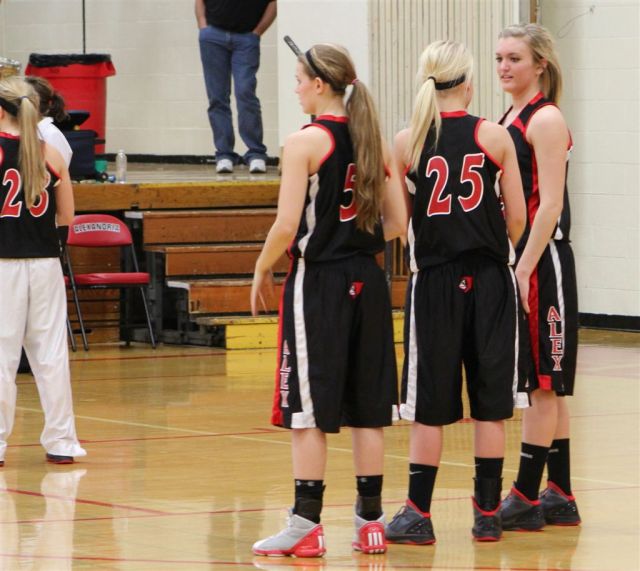 [And LT, the straw that stirs the drink.] 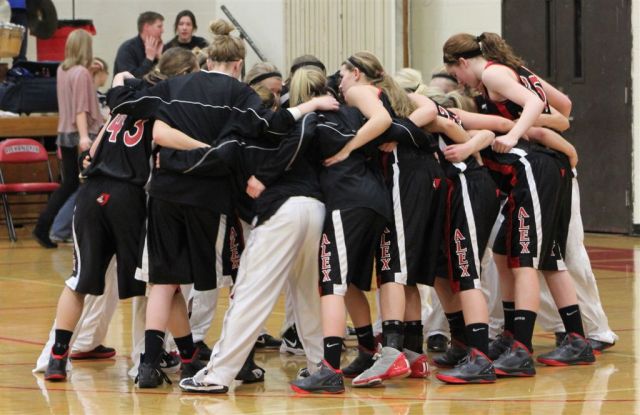 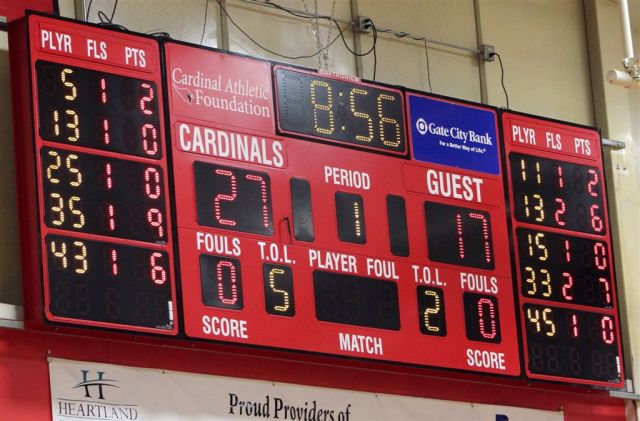 [Halftime.  Really not that close.  The Cards played great defense.  The ‘Streeters made 5 free throws in the last few seconds, including 3 when fouled on a desperation heave at the last second.  Ref had to call it.]

I don’t know if it was by design or if the game dictated such, but it appeared our goal was to get the “bigs” more involved offensively.  And it worked.  Whitney had her coming out game – with 20 points (obviously as a result of this blog’s advice to “keep on shooting”); and Kalli put up 9 in the first half (I’m not sure what she had for the game).  Lauren didn’t have her usual game offensively but, as usual, she dictated the pace of the game with her defense. 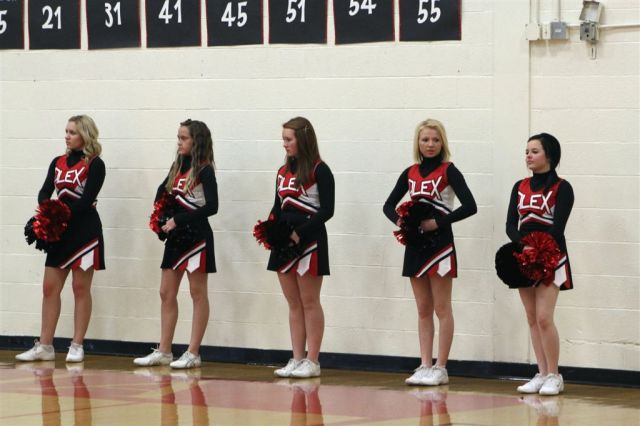 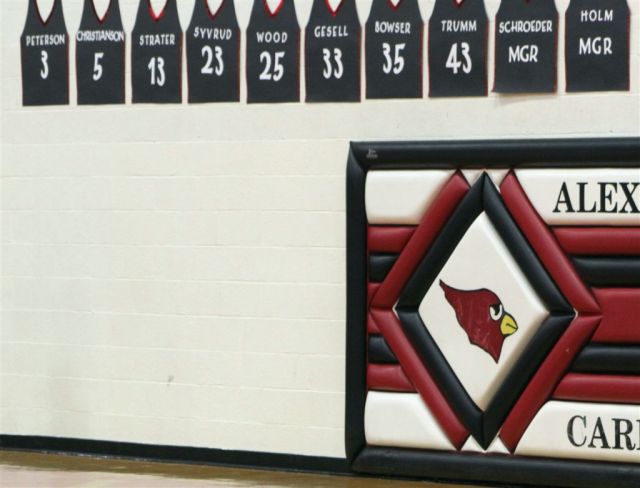 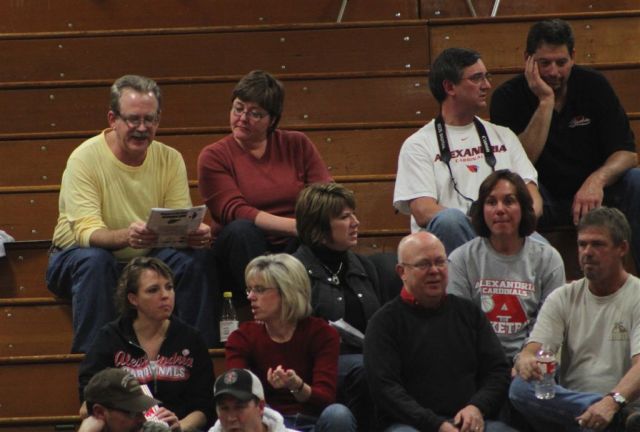 [Cardinal brain trust – many believed to have familial relationships with the players.] 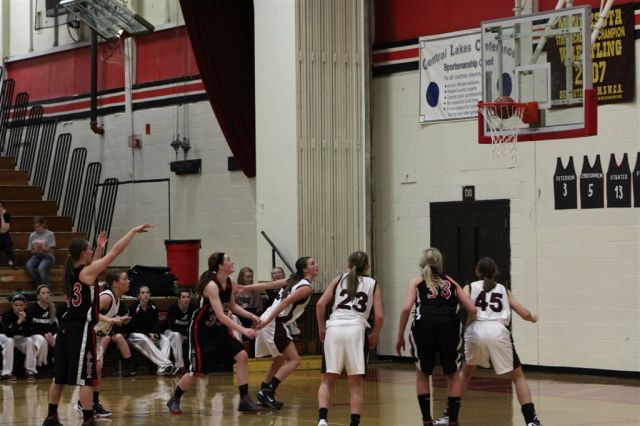 [The staff photographer and I venture to capture the ball going through the hoop – the Cards have been very good at the line this year.] 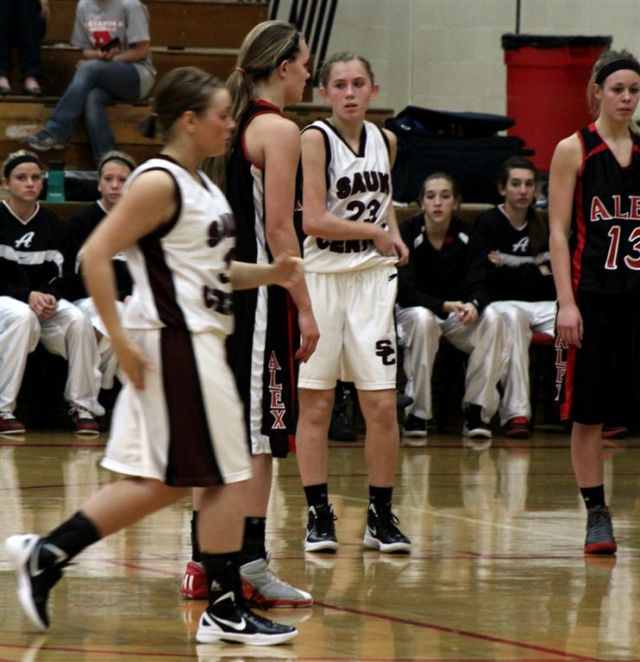 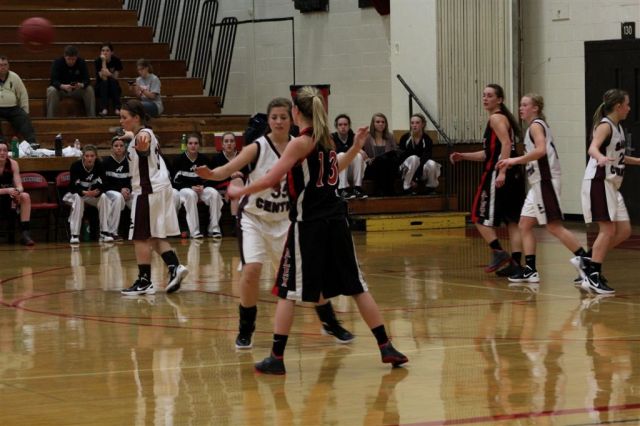 [This is not the look of a coach and team that has just turned a 20-point lead over to the reserves.  By the nature of their style, the Cards will always be turnover prone.  In this game, too many times they would work hard to create a defensive turnover but then immediately make an unforced turnover themselves.  They also allowed too many easy put backs by the ‘Streeters.  The nature of the 1-3-1 defense makes defensive rebounding difficult because it is hard to determine box out responsibilities.  I think the team would like to tighten that up.  On the positive side, however, the defense always makes life miserable for the oppostion – and they may have developed a front line scoring punch with Whitney’s mid- to long-range shooting abilities and Kalli’s quick moves underneath.]

And again, the staff photographer must have spent the overnight in the “darkroom”: 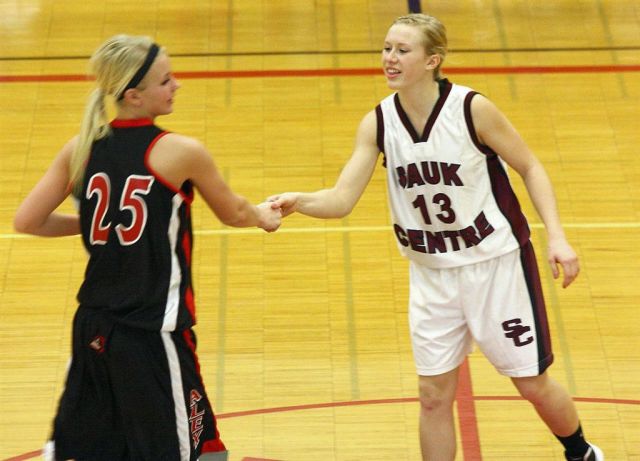 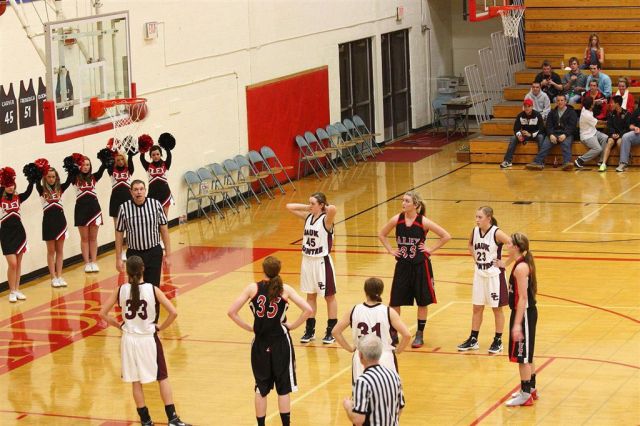 [Amanda NBN (nothing but nylon)] 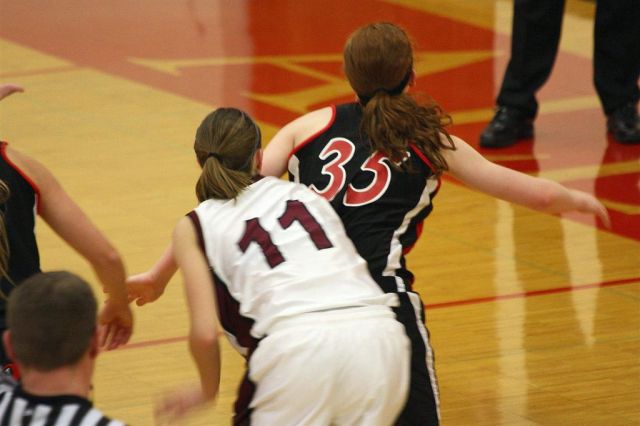 Tom — Your reports and pictures of Alexandria women’s sports are great.  The young women look refreshingly beautiful, bright and innocent.  I meant to ask you if Alex plays Lino Lakes, MN, or if that is in a different conference?  George Washington has a Junior forward/guard from Lino Lakes, MN — Megan Nipe, if the name is familiar.  She played a great game Sunday for GW, hitting several threes from the corner.  I liked her quick release with the ball.  Georgetown never could cover her shot once she got the ball, which explains her uncontested threes.  ~ Betsy (our stinger in D.C.)

After having dug to a depth of 10 feet last year, New York scientists found traces of copper wire dating back 100 years and came to the conclusion that their ancestors already had a telephone network more than 100 years ago.

Not to be outdone by the New Yorkers, in the weeks that followed, a California archaeologist dug to a depth of 20 feet, and shortly after, a story in the LA Times read: “California archaeologists, report finding of 200 year old copper wire, have concluded that their ancestors already had an advanced high-tech communications network a hundred years earlier than the New Yorkers.”

One week later, a local newspaper in Minnesota reported the following: “After digging as deep as 30 feet in his pasture near Northfield , Minnesota , Ole Swenson, a self-taught archaeologist, reported that he found absolutely nothing. Ole has therefore concluded that 300 years ago Minnesota had already gone wireless”.

Just makes a person proud to be from Minnesota .  ~ Liz (our stringer in San Antonio)

Look at the fans in the pictures – If this was the opening tip-off there a lot of people looking elsewhere.   The guy eating the pizza is multi-tasking – eating & watching. ~ An anonymous local fan.