A return trip to Costa Rica, the Pacific side . . .

[And here’s a little something I recently learned at our local Senior College.  Our port of call, Punta Arenas, is on the Gulf of Nicoya.  The Nicoya Peninsula, across the Gulf from Punta Arenas, is one of five international Blue Zones.  This Central American nation isn’t that far from the U.S. geographically, but it is way ahead of us in longevity. The Caribbean nation is economically secure and has excellent health care. But other factors are at play, especially in Nicoya, an 80-mile peninsula just south of the Nicaraguan border (bluezones.com).  Blue Zones are demographic regions of the world where people commonly live active lives past the age of 100 years (Okinawa; Sardinia; Nicoya peninsula Costa Rica; Ikaria, Greece; and Loma Linda, California).]

[Or maybe the reason for the longevity of these Costa Ricans are the beautiful sunrises?] 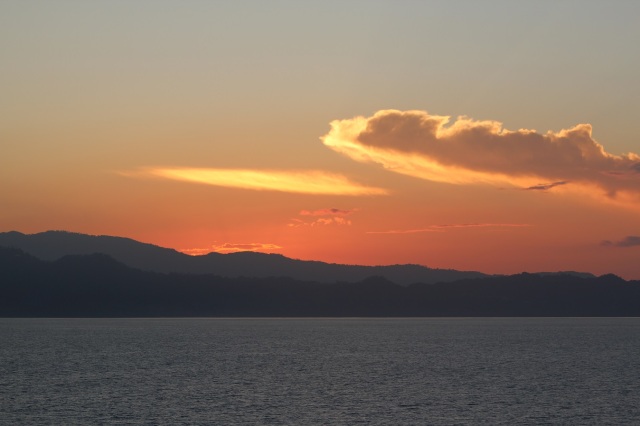 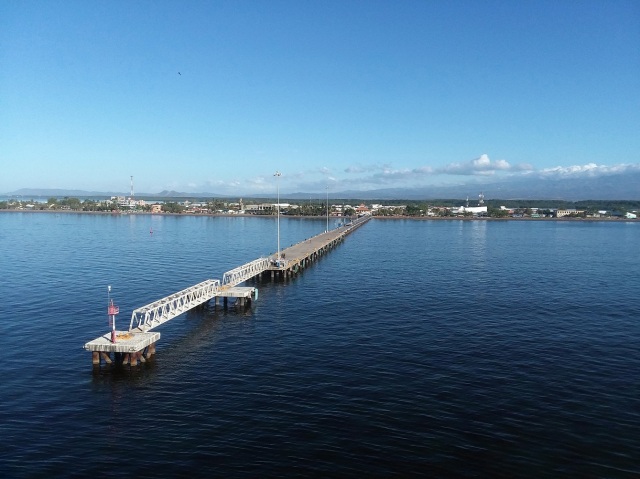 [And now we’re on one of the dozens of buses here to take we tourists on various land excursions . . . ]

[A stop along the highway (literally on the shoulder) where buses have been pulling off for wildlife settings for so long . . . ]

[That the wildlife reacts to the arrival of the buses . . . ] 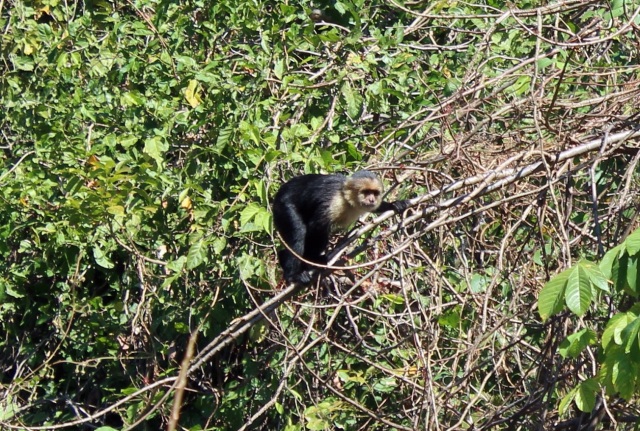 [They come in anticipation of . . . food!  Just like human beings!] 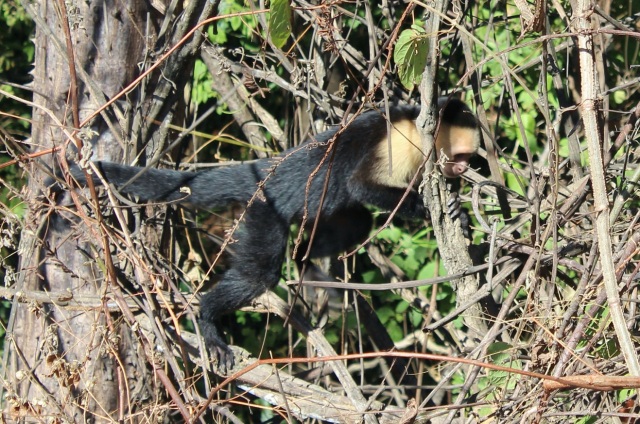 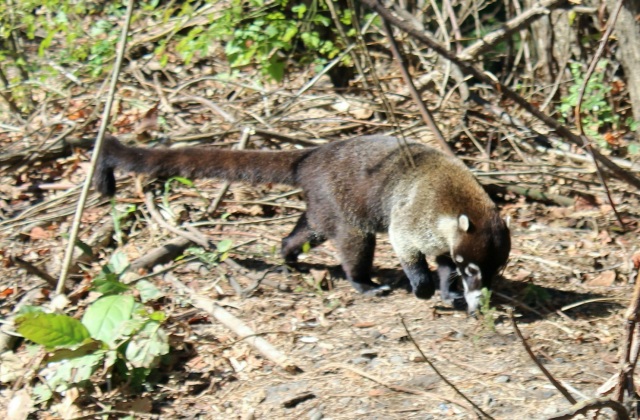 [Not the least bit concerned about being among we two-legged giants . . . ]

[Carara National Park sits near the Costa Rican Pacific coast, in the Central Pacific Conservation Area.  Carara lies just about 30 miles (about an hour) west of San José and is home to one of the largest populations of wild Scarlet Macaws in the country.  You’ll often get a sighting as you drive on the nearby highway. The park is predominantly formed by primary rainforest, which makes it ideal for birds who nest in the dense trees (vacationcostarica.com).] 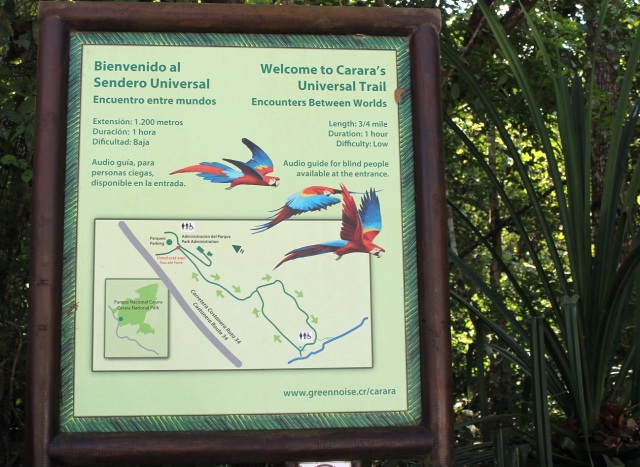 [Elderly tourists begin what for many was a longer than anticipated trek through a rather warm and humid jungle . . . ] 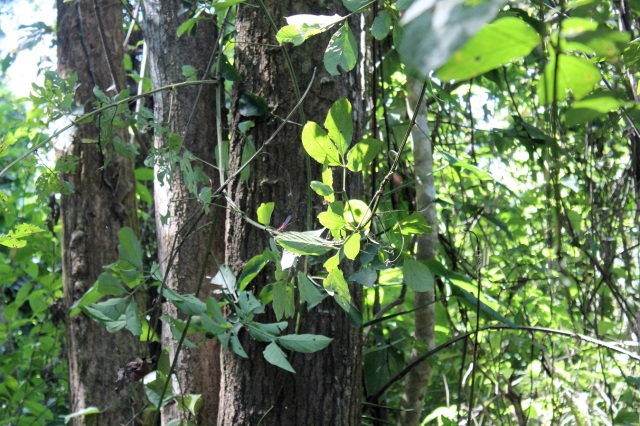 [The monkeys, upset by our presence, attempted to discourage our trespass by launching debris at us from the tree tops.  Fortunately, the trees are so dense nothing seemed to get through . . . ] 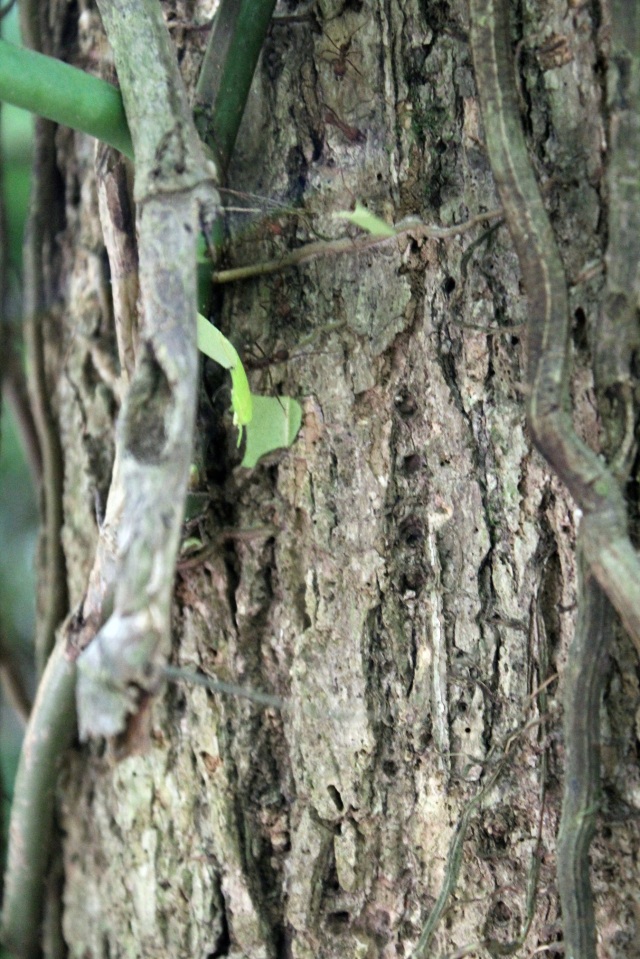 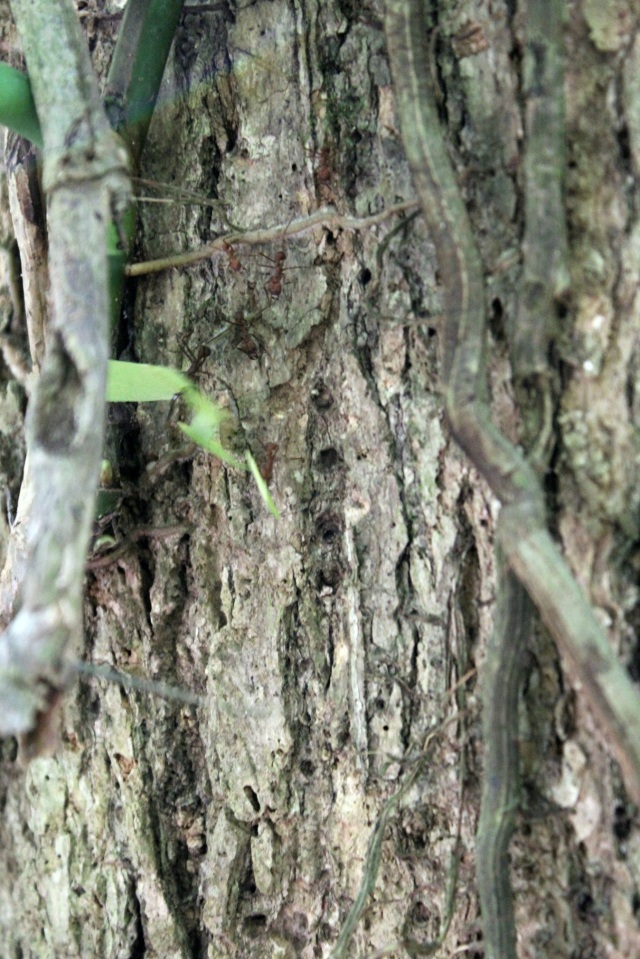 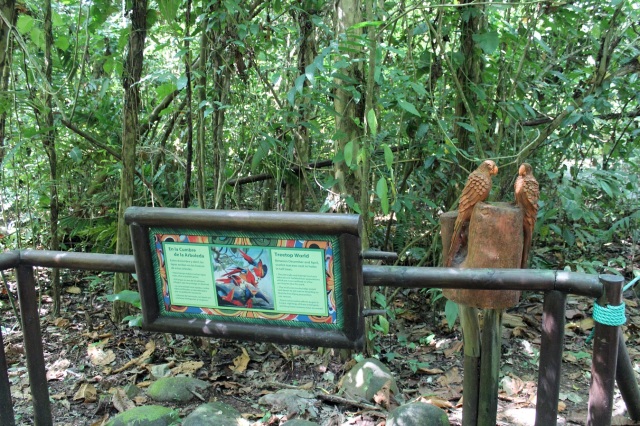 [There!  See it up there?  I have no idea what they were pointing at?]

[Just to highlight a tall tree among other growth around and attached to it.] 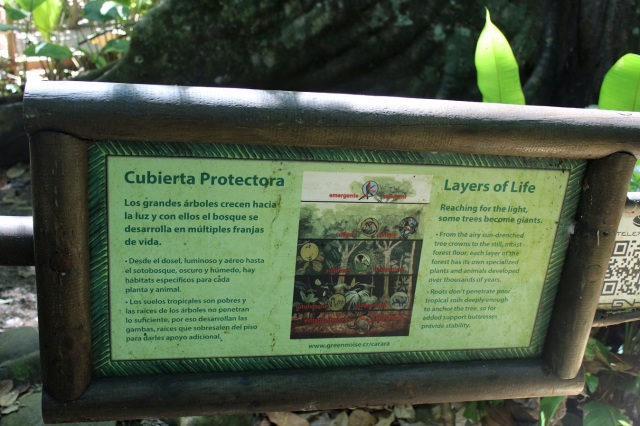 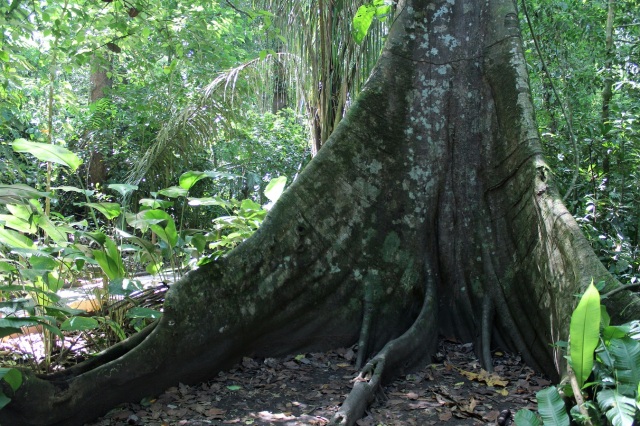 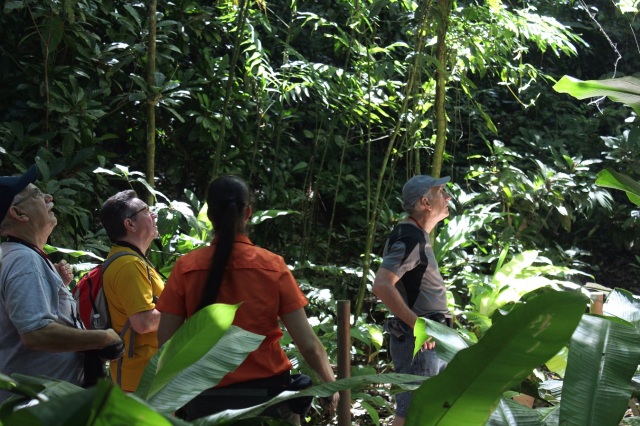 [They were looking at a tiny white bat – see it?] 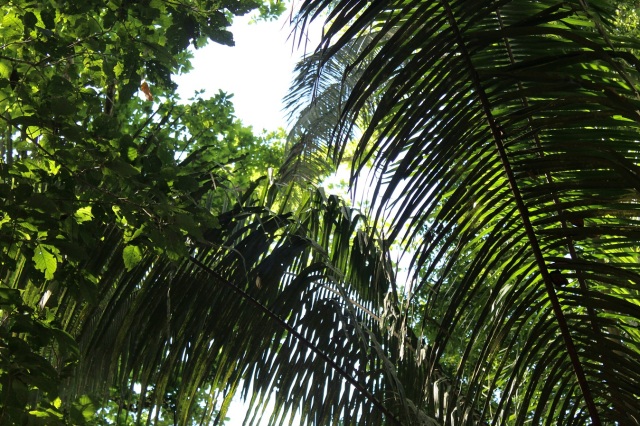 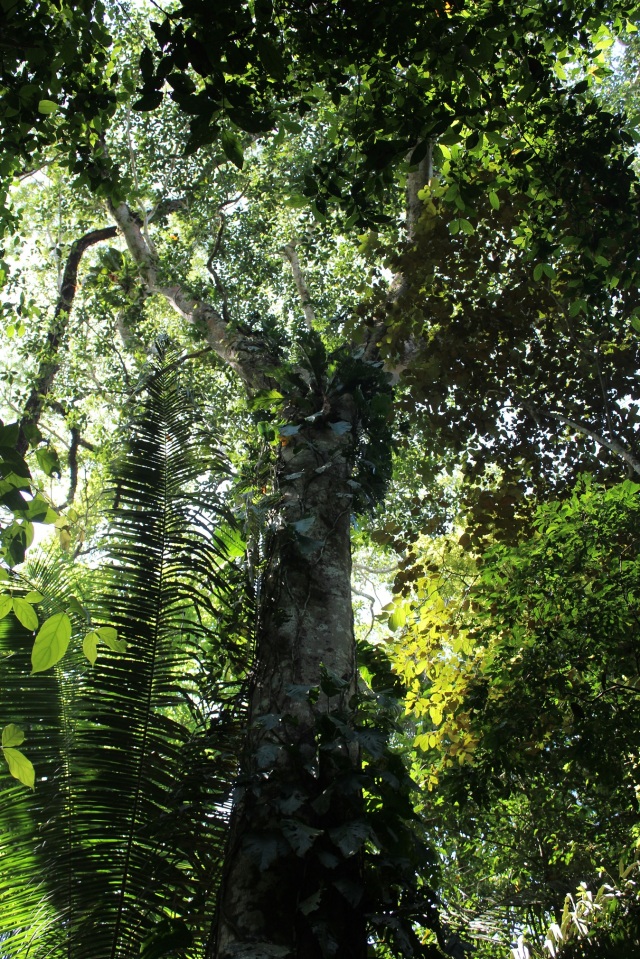 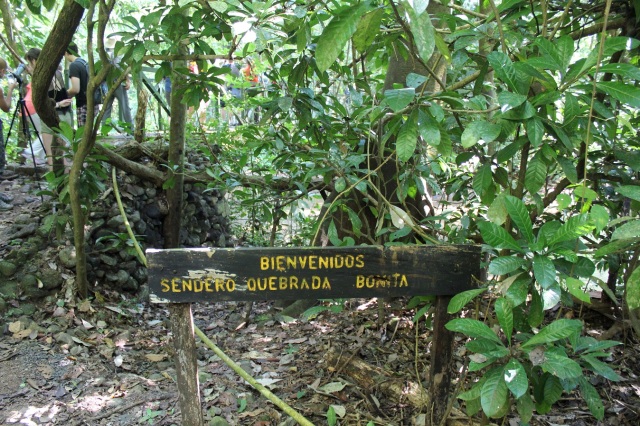 [Strangler figs are everywhere.  And if you look just to the right of this one, you’ll see . . . ]

[The ultimate destination for our into the forest hike was to see them – a Scarlet Macaw couple in their living room.  Carara National Park is a major habitat for this endangered species . . . ]

[Located at the bridge over this torrential body of water . . . ] 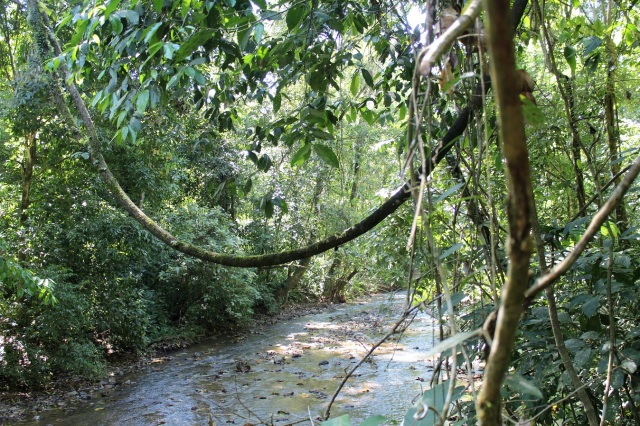 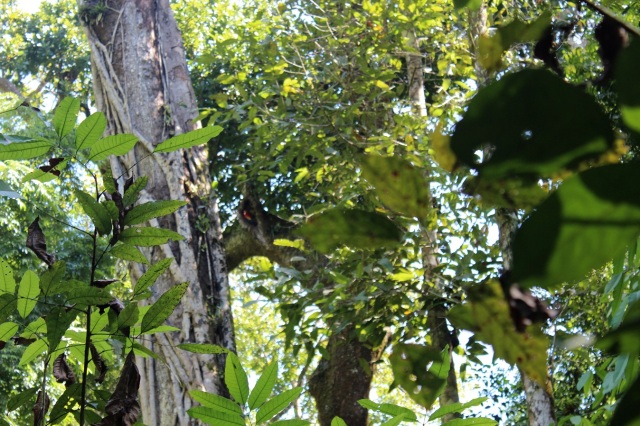 [Leaf-cutter ants cutting over, under, and through our path . . . ] 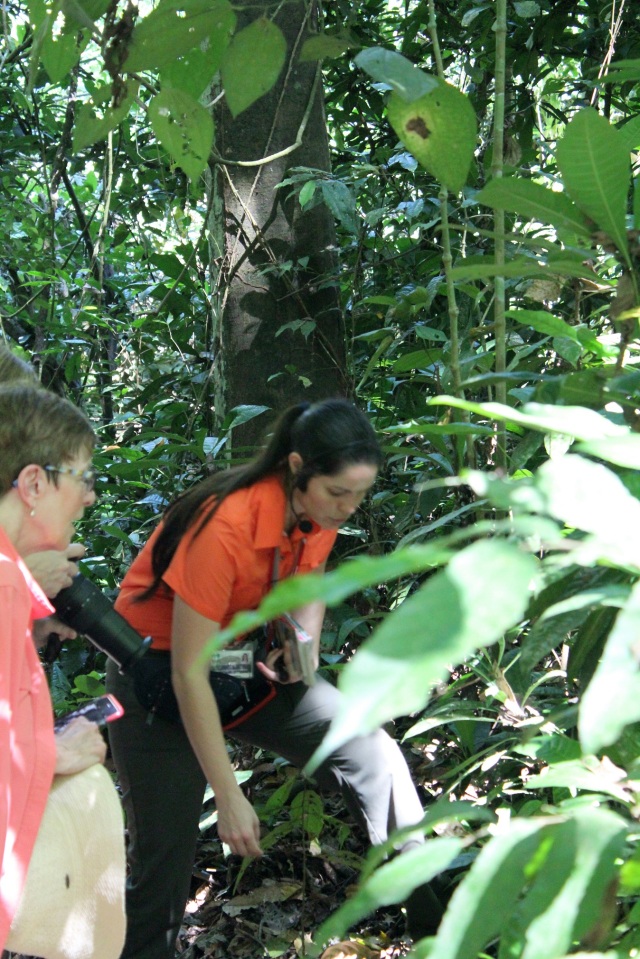 [In the jungle, the mighty jungle . . .  It was a 2-hour round trip hike.  Some realized early on they weren’t going to make it, so they sat down and waited to rejoin the group on the return trip.  Since I was constantly taking photos, I was lagging behind the group which allowed me to keep an eye out for any stragglers . . . ]

[The park’s name is the native Huetar word for crocodile. Visit the park and you’ll understand why since the Tarcoles River, which forms the park’s northern boundary, is famous around the world for its giant and plentiful crocodiles. The Tarcoles River Bridge on the Coastal Highway is a favorite place for tourists to stop and view the monster-sized crocodiles below. Boat tours on the river also are very popular (enchanting-costarica.com).] 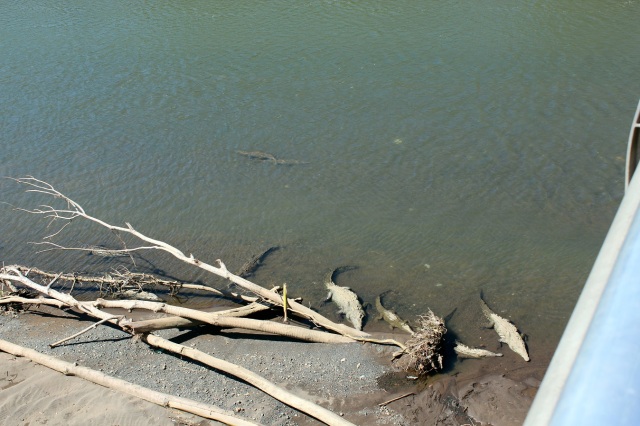 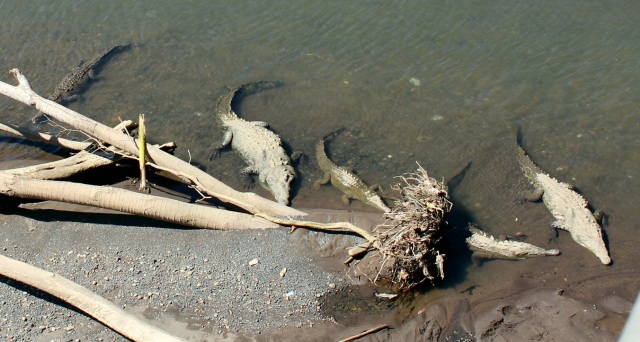 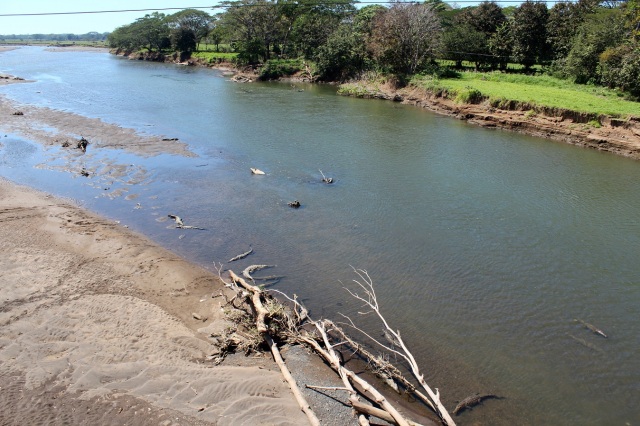 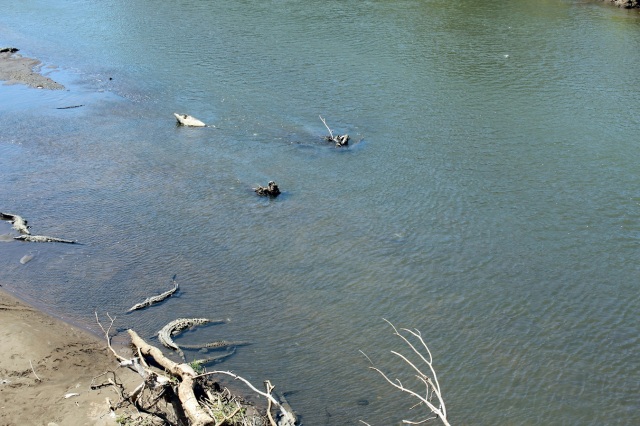 [It was a tough walk across the bridge – it was high (my acrophobia), the walk lane was very narrow, and there was continuous vehicle traffic on both sides of the road (the holiday season) . . . ]

[It was still morning, and we’re heading back to ship to catch our afternoon excursion.]

[And to say good-bye to Andrea.  We would have another guide in the afternoon . . . ]

The only way to be sure of catching a train is to miss the one before it.  ~  G. K. Chesterton