The weekend produced a Chamber of Commerce bonanza – there were eight teams in town for the Cardinal volleyball invite; and I believe 21 many for the Lions’ cross country meet at Arrowwood.  Classmate Brad and I decided to forgo the football game Friday night because the weather was “iffy” – at our age, we don’t do “iffy.”  The weather actually wasn’t bad as the Cards put on another offensive display against Bemidji to the tune of 59 – 42 (see following video).  We keep hoping for good “fans in the stands” weather – and with that concept in mind, we opted for the volleyball invite which began at 9:00 am on Saturday . . .

[And here’s your program and schedules.  It went on all day, and Brad and I were basically there from 9:00 until about 1:30, when I went home to find the Super in dire need of grounds maintenance assistance.  With that length of time at the school, I paid my first ever visit to the concession stand – it was manned by a couple of Cardinal footballers whom I congratulated on their fine peformance the previous night.] 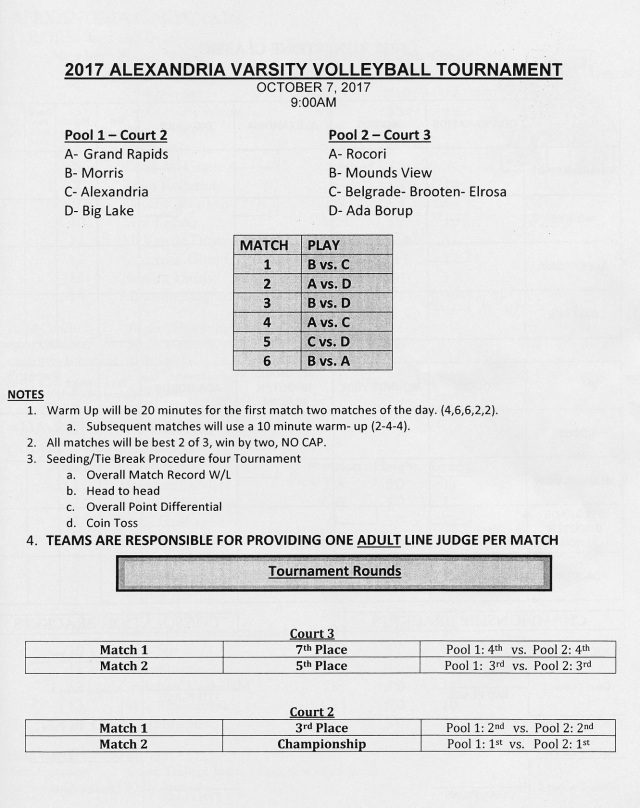 [After perusing the program, we figured out the Cards would be playing Morris Area, Chokio/Alberta, a/k/a, MACA (yes, I did a double-take on that one) in the first game.  I didn’t bring the big lens, figuring we’d be moving a lot and wanted to be light on my feet.] 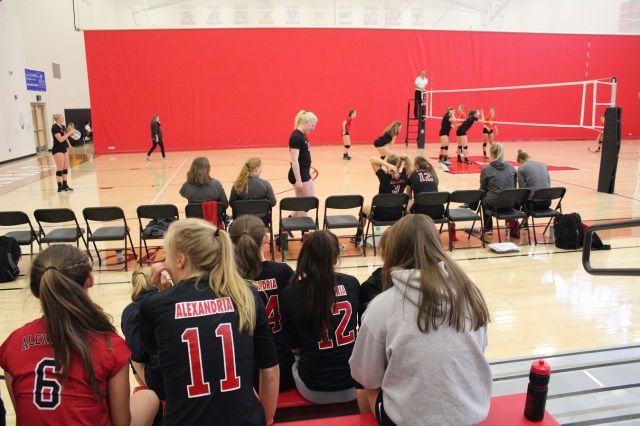 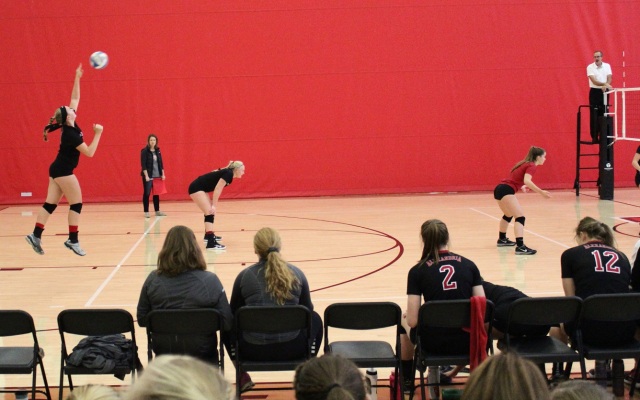 [Based on the respective size of the schools, I figured Alex would be the winner . . . ]

[I figured wrong.  The Cards had just ended section and conference rival Willmar’s 10-game winning streak, and we were a little flat . . . a let down after a big win.  Morris dispatched us easily in 2 quick games.  I thought they looked pretty good and discovered they are ranked 7th in the state in class AA.]

[Brad and I then immediately dispatched ourselves to Trav’s for breakfast.  Upon returning to the scene of the crime, I decided to have a little camera fun with series shots while we played Grand Rapids.  First up is McKenzie Duwenhoegger (11) serving . . . ] 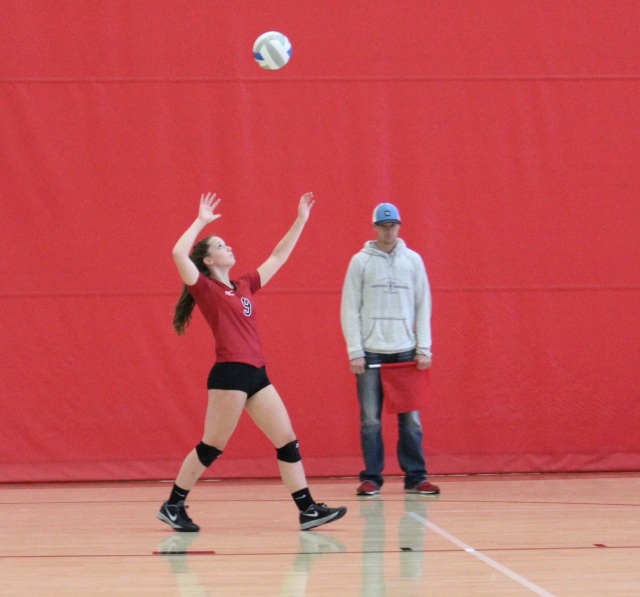 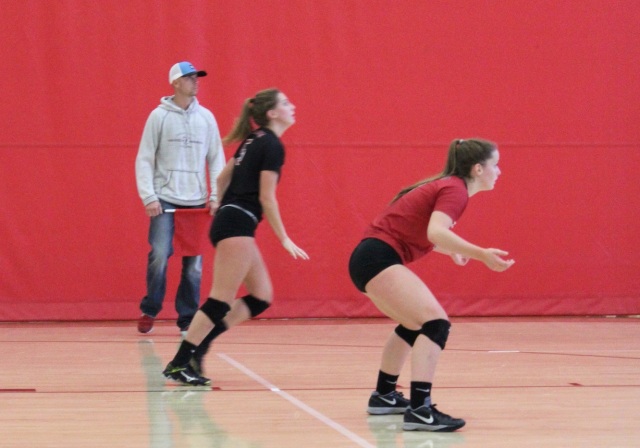 [Absent any post-invite preparation, I also knew nothing about Grand Rapids, our current opponent.  I subsequently discovered they are ranked in the top 10 in the state.] 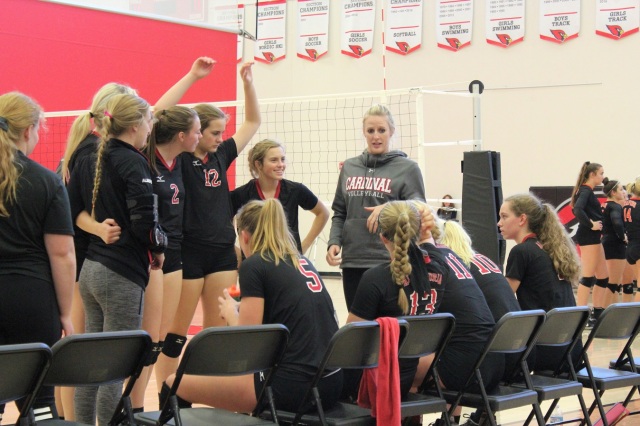 [We started slowly, a la the Morris games, but came roaring back.  They were already unraveling the scoreboard before I could get a shot – the actual score in our favor was 25 to 20-something.] 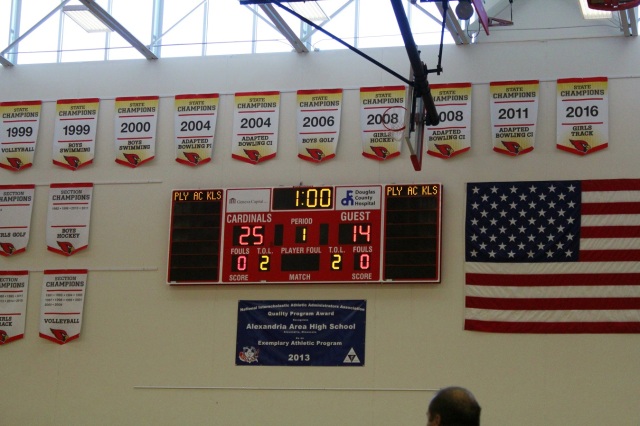 [We were rolling now and easily dispatched the Thunderhawks in the 2nd game.] 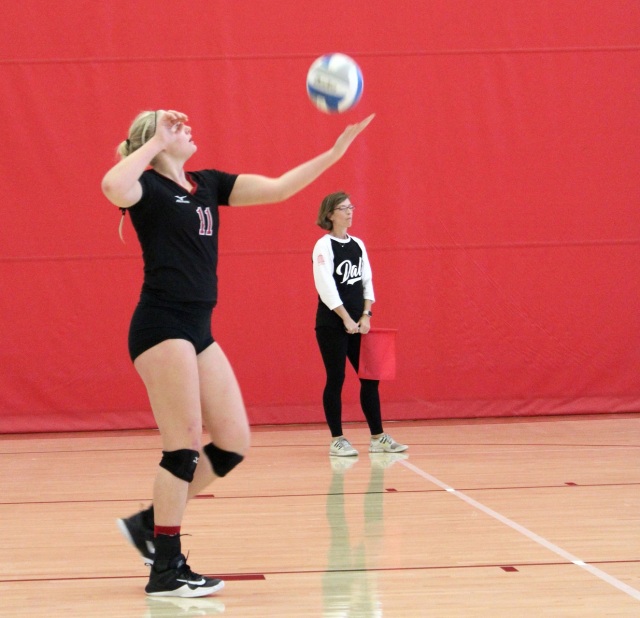 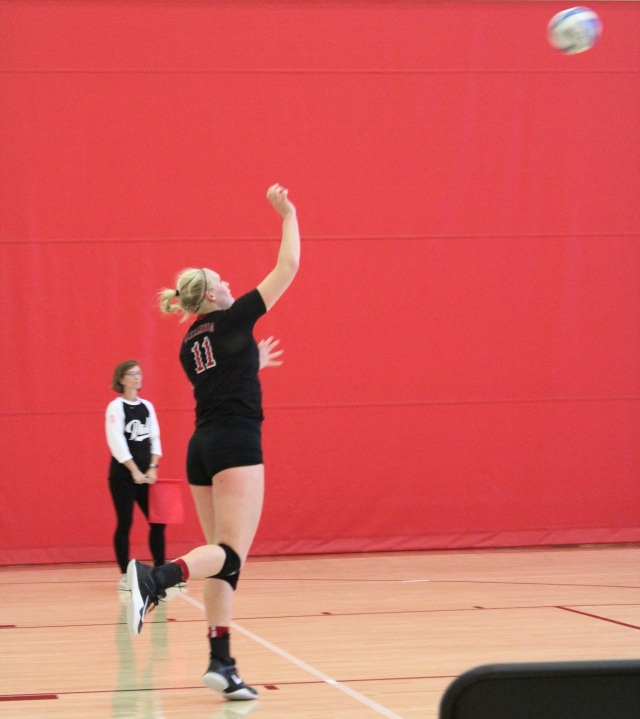 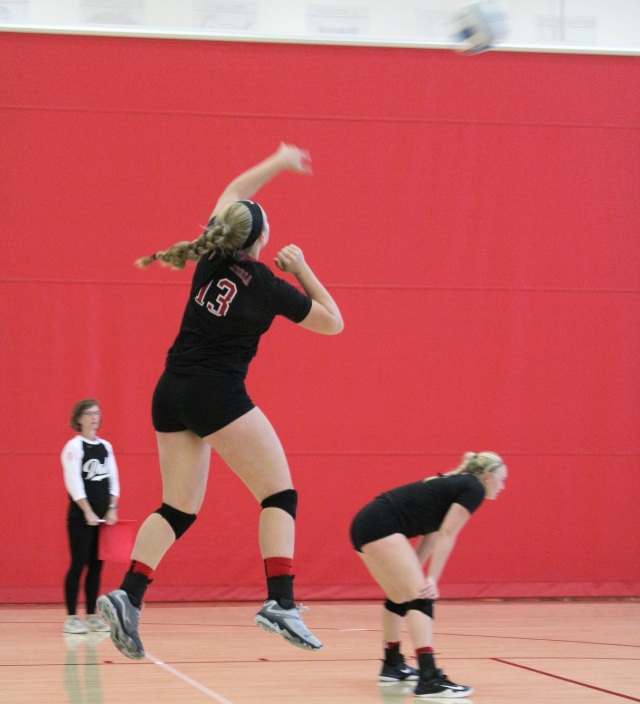 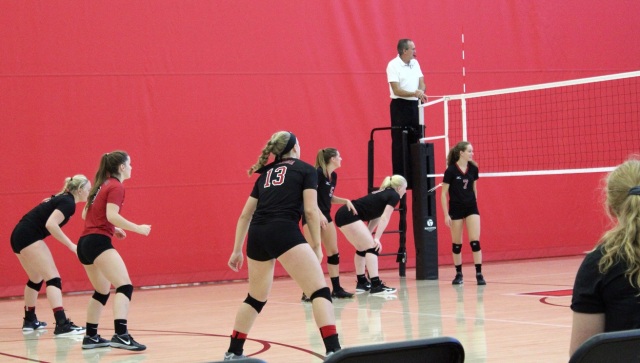 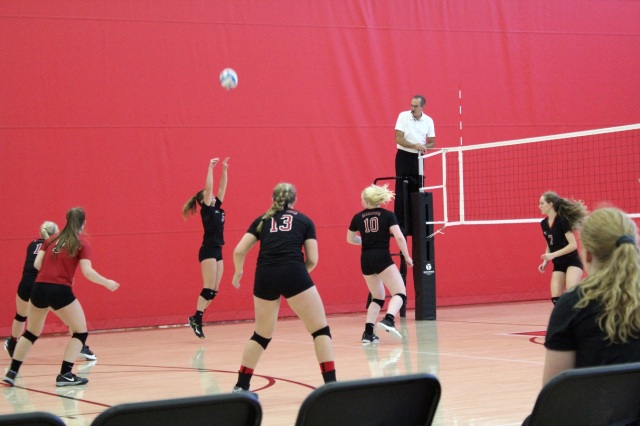 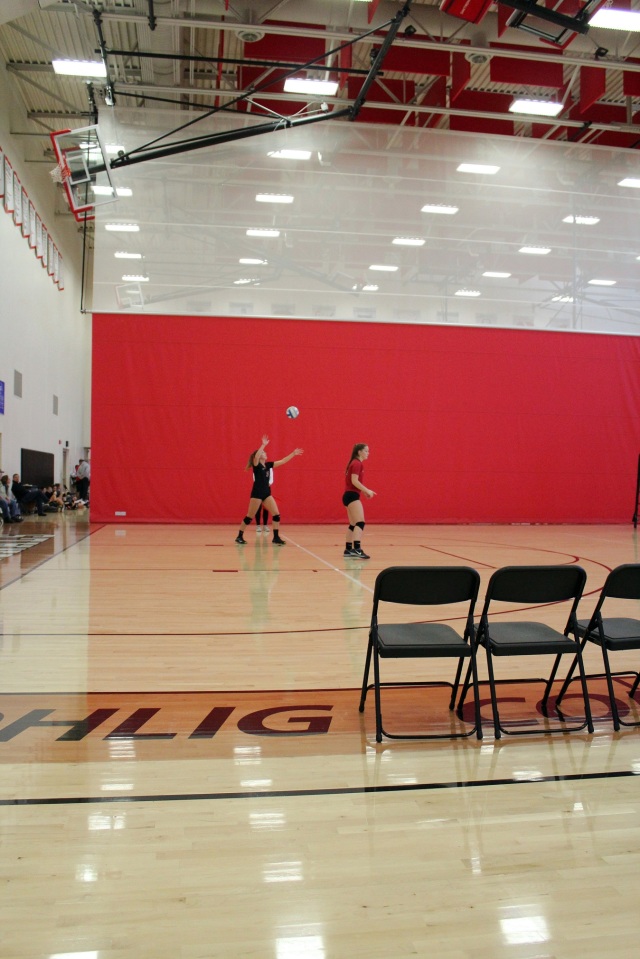 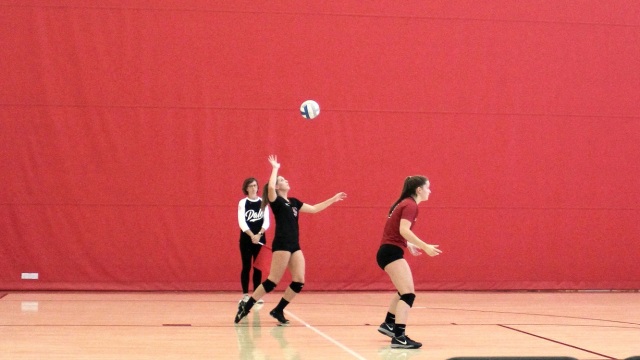 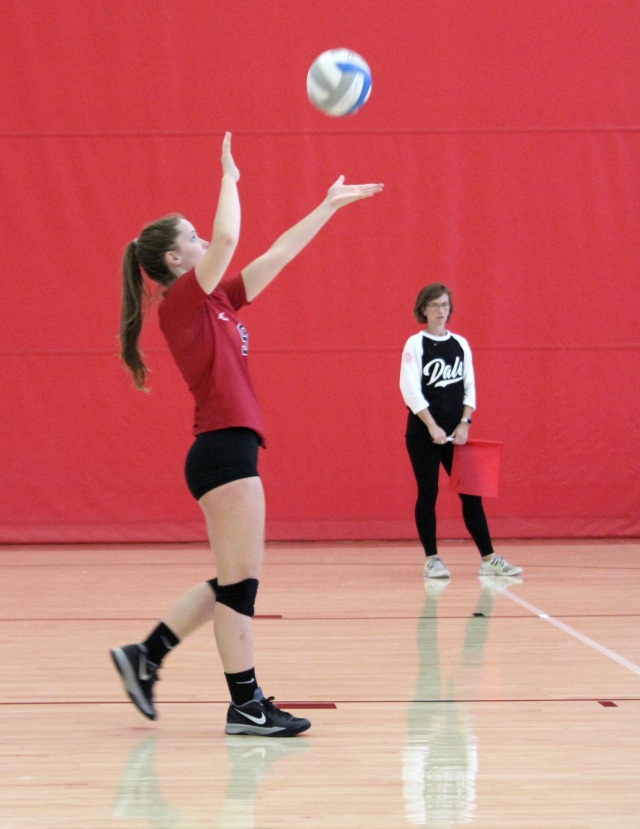 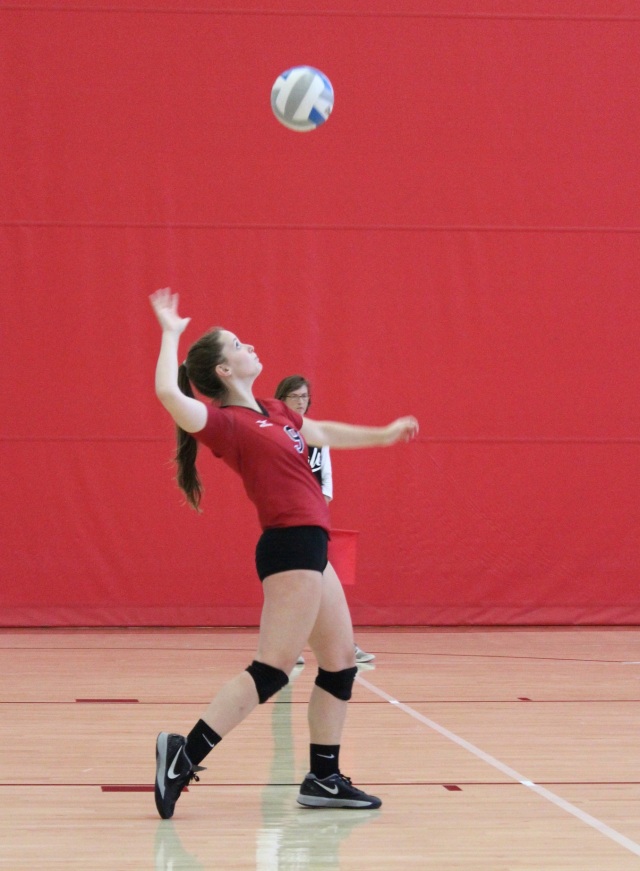 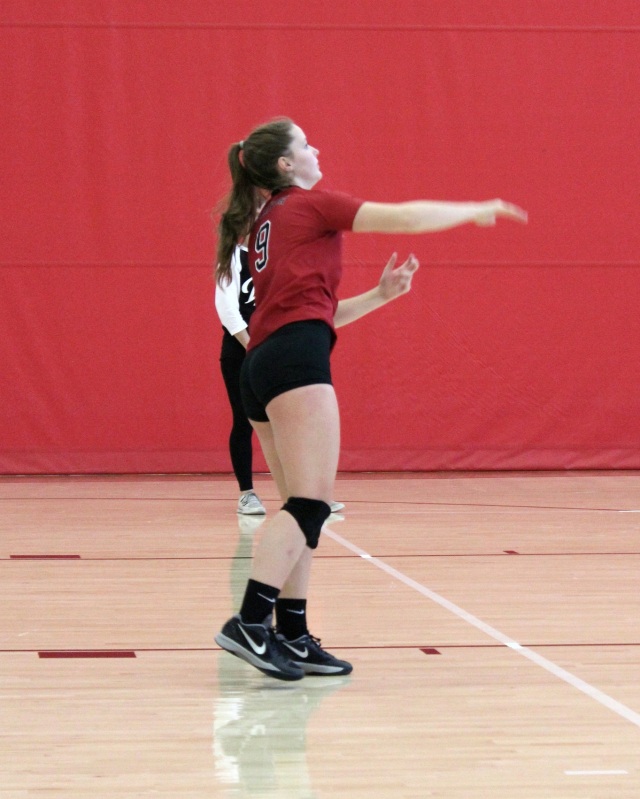 [And when passing and setting are good, you get in a rhythm.  Our rhythm was such that it was spread around to our four big hitters – McKenzie, Kendra, Mya, and Mia.  I thought Grand Rapids was a bit intimidated, not knowing from whom the next big hit was coming.  Big Lake was definitely looking for places to hide.  So, team, no more finesse – establish the big hits and keep them going!  🙂  (We could not stay for the final game – we beat Belgrade-Brooten-El Rosa for 3rd place, winning two close games.)]

Volleyball rules are simple. If it is on the floor, pick it up and get it into the air. If it is in the air, keep it off the floor.   ~  John Kessel

Up Next:  Raking?  Shoveling?