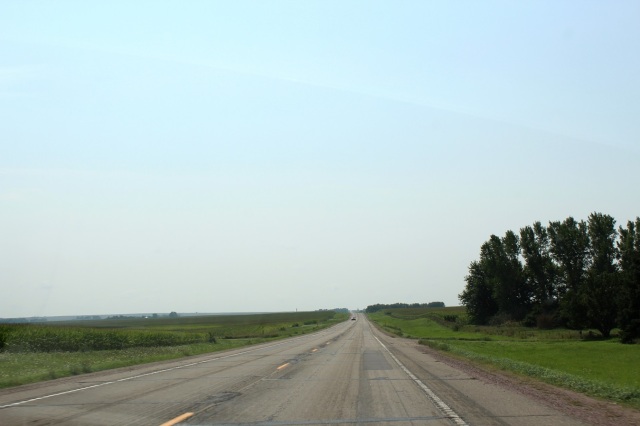 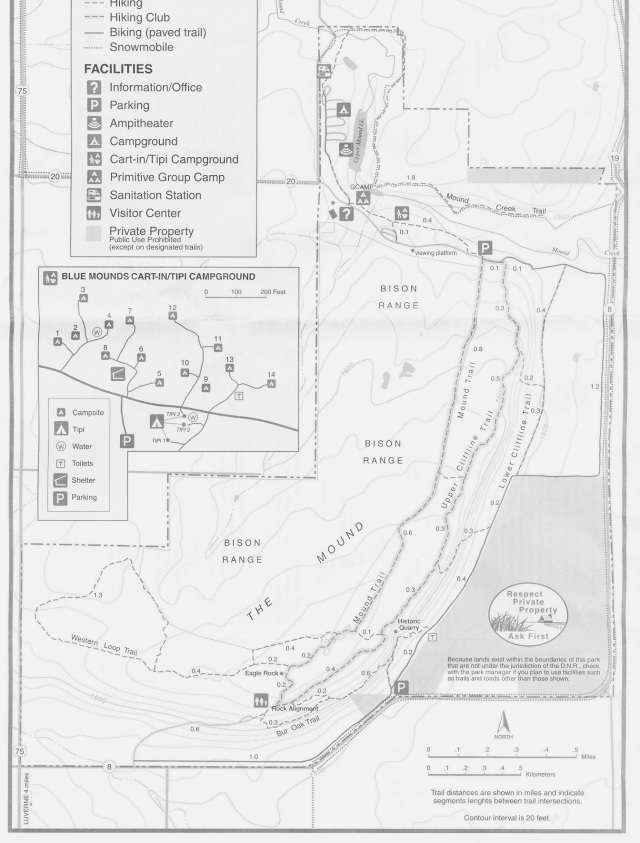 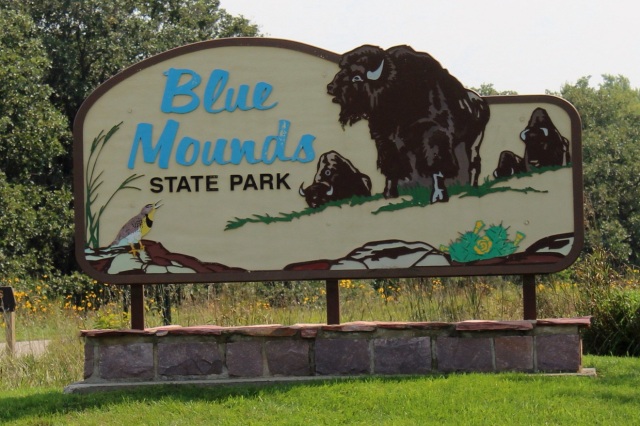 [And, of course, since youngsters are going off to college now, their parents have to say, “Bye, son.”  Oh, you heard that already?] 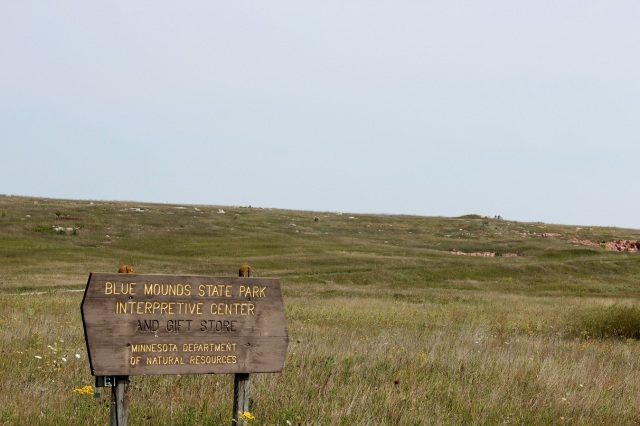 [Not a bad view (guess the background city?), with a Halloween tree in the foreground.]

[Nope, can’t quite make out the name on the water tower.]

[We hiked up to the interpretive center only to find it closed.  I guess we may have misinterpreted something?]

[Either riding thermals (it was a hot, sunny day) or an aged hiker collapsed on a trail.] 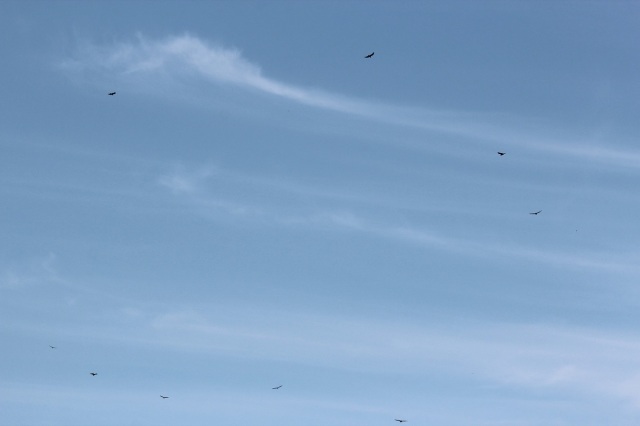 [We wanted to get up there – it would require a drive back to where the bison were and then a 2-mile trail hike.  We didn’t have the time, or the desire.] 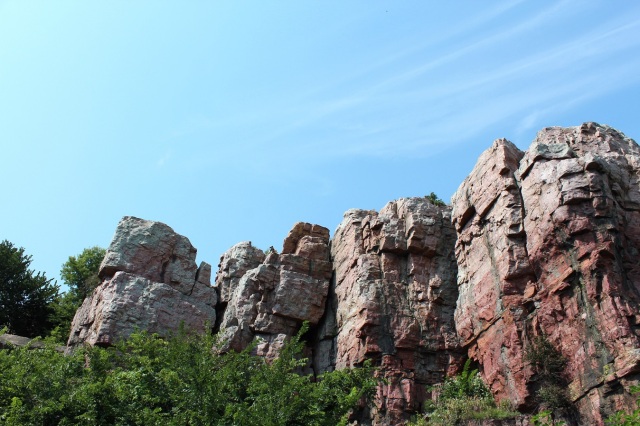 [There’s a topless man up there!] 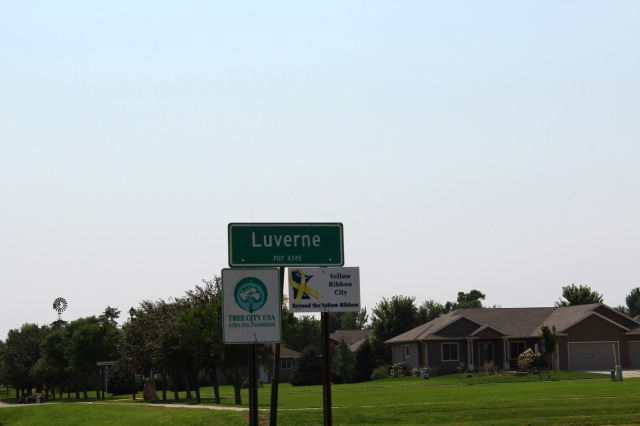 [Luverne revives a lot of childhood memories.  They always seemed to be in the state basketball tourney, so they got a lot of statewide TV coverage back in the day.  Of recent vintage, they have become a bit of a hockey power – the only one from this part of the state.]

[And not a bad little baseball field.  The high school nickname is the Cardinals, a la Alex.] 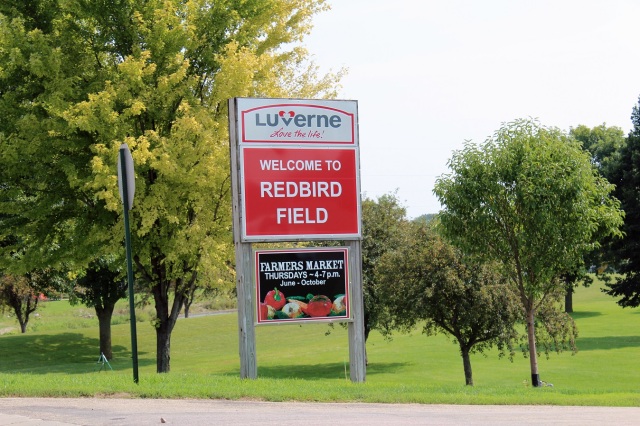 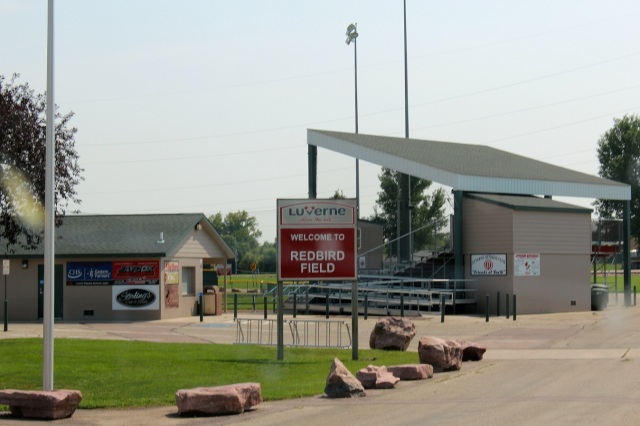 [Another mid-size city downtown that appears to be vibrant.] 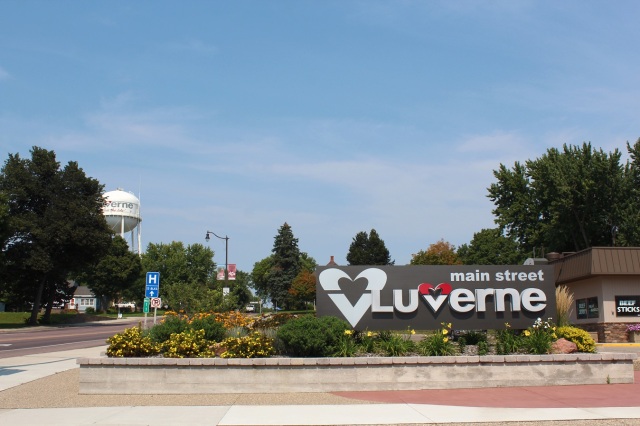 [I did mention lunch, right?]

[Whom amongst us doesn’t enjoy a chocolate malt?]

[And the house Mom grew up in – she was born in Eau Claire, the family moved to Worthington when she was very young, and at some point in her mid-teens the family moved to Minneapolis where she graduated from Marshall High in 1941 (I think, I wasn’t there).] 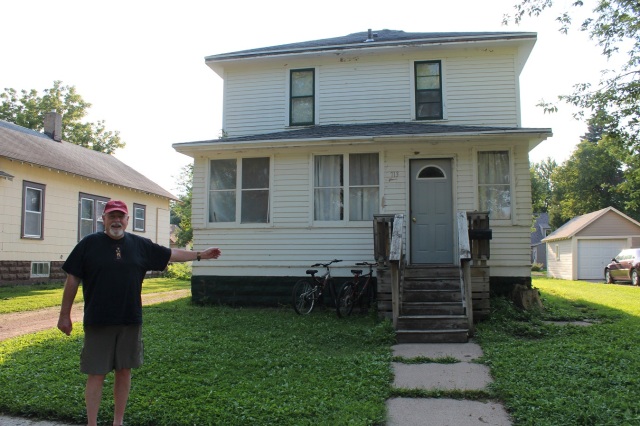 [There was a young man in the garage in the back.  I asked if he’d mind if I took some pictures of his house – I told him my mom grew up here, like 90 years ago.  He smiled and thought that was cool.] 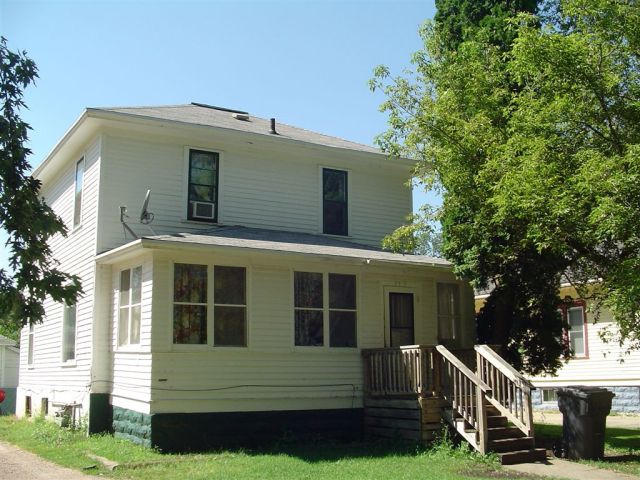 [And here’s Mom with her brother Dick (later to become my uncle Dick, though neither of us knew about that at the time).]

[A final shot as we go in search of Worthington.] 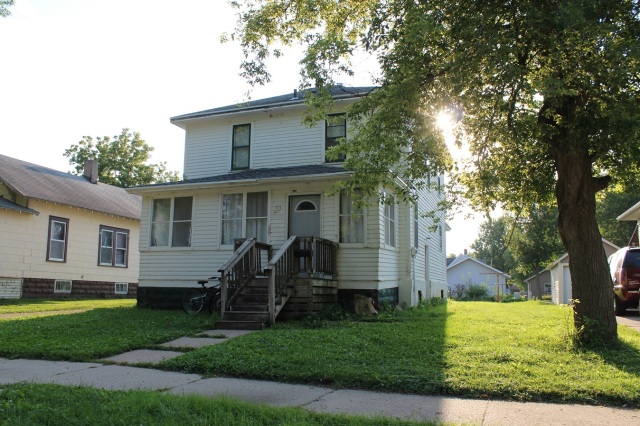 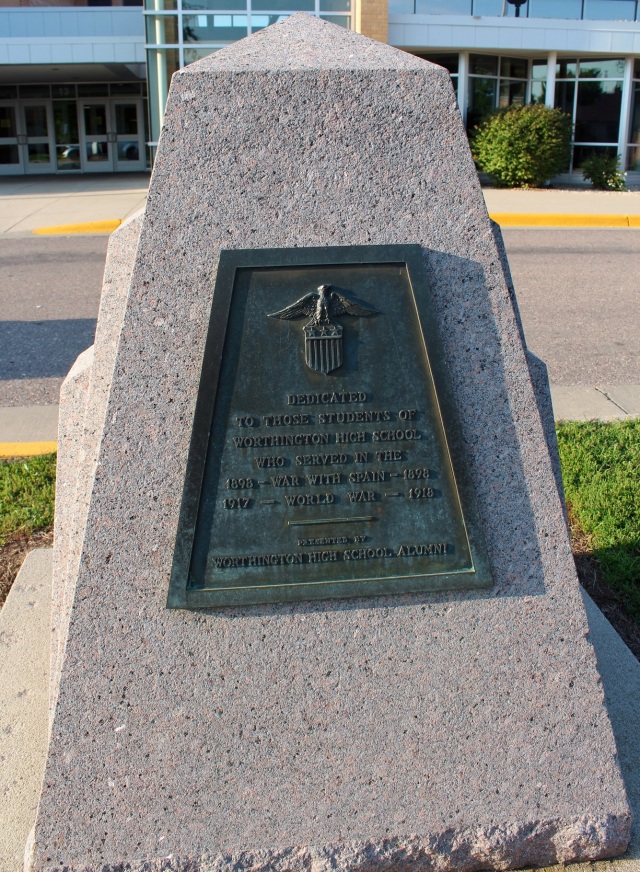 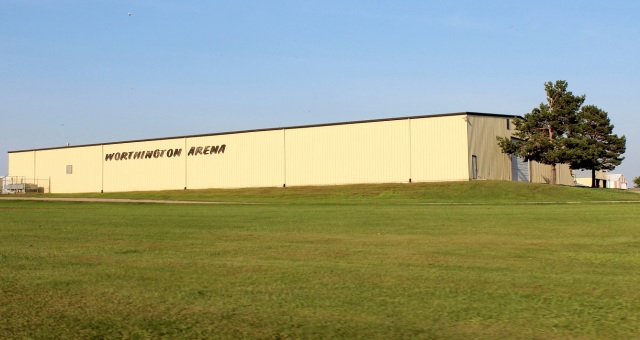 [A lovely evening for a drive around the city’s Lake Okabena.] 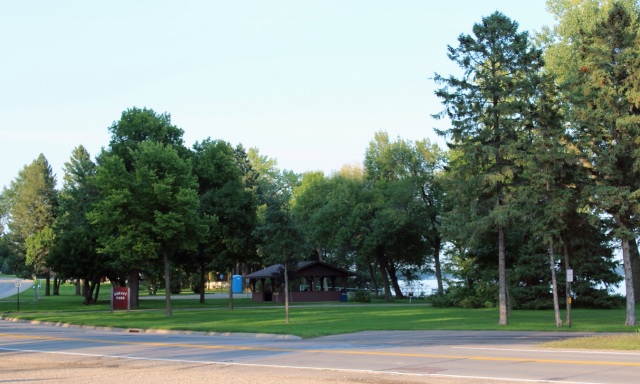 [I still don’t see anything on the water tower?] 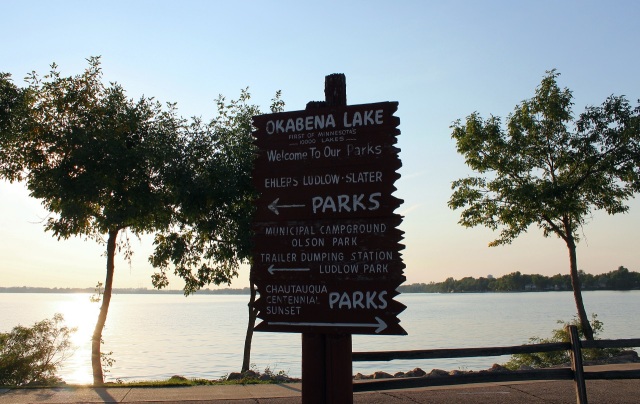 [Lake Okabena. It’s only 776 acres (about 3/4’s the size of beautiful Lake Darling), but it hosts . . . the Worthington Windsurfing Regatta and Unvarnished Music Festival — which has drawn sailors, musicians and spectators to Worthington for the past decade. (www.dglobe.com)] 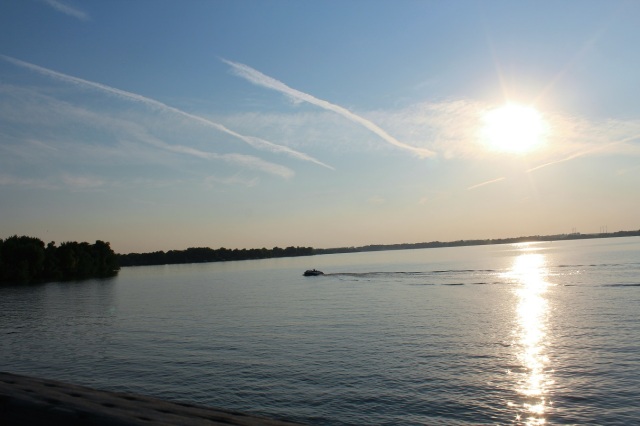 [“The kids” ate here once (everybody’s been here except us?) and recommended we do as well.]

[I thought it was an abandoned building, but for some reason the place is closed on Saturdays.]

[Worthington’s population is 12,800 – about the same size as Alex.  But it had a Daily newspaper since 1872?  Until April of this year, that is, when it changed to a twice weekly Wednesday and Saturday publication.]

[We still were looking for fine dining – this place looked good right downtown . . . ]

[The Super got a taco salad, I party dip Azteca.  Mmmmmmmmm!] 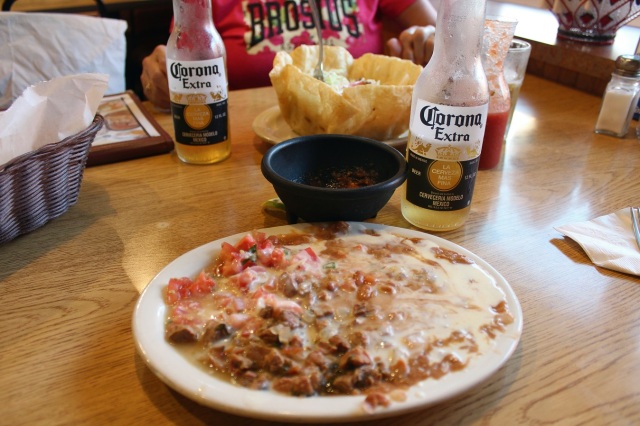 Age is something that doesn’t matter, unless you are a cheese.  ~ Billie Burke