3 Days in Long Pants in August

General introduction:  August is generally a hot, dry month in these environs.  It’s the one month out of the entire year that Minnesota’s carefully groomed lawns may brown up a bit. This August, however, will go down as the first month in probably a decade to be cooler and wetter than normal.

[The first of 3 straight days at the winery.  There was lots of other stuff going on in Vacationland USA, as there always is at this time of year, but we were too weathered out and/or tired out to partake of such.  If life hands you a lemon, take a nap . . . ] 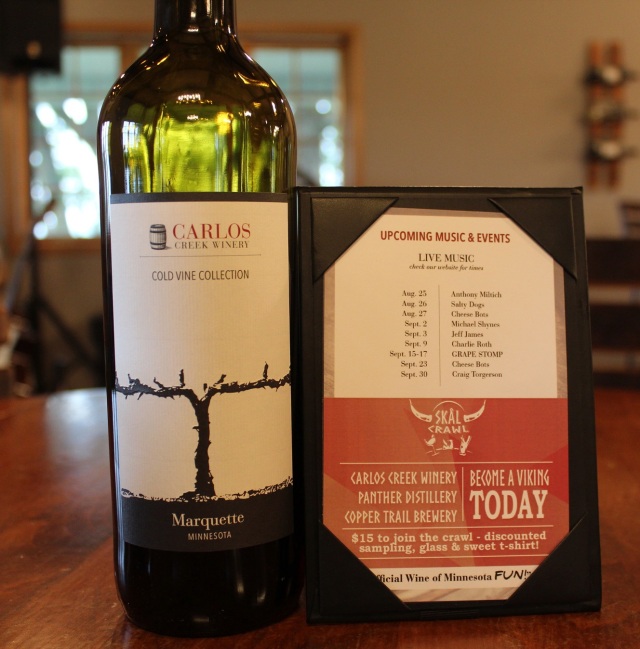 [The forecast was for chilly and rainy – and it was.  Nevertheless, we had a small but elite group for Anthony . . . ]

[We were joined by the Bergers, before they take off for their month-long sojourn through the great American West.]

[OK, this isn’t Anthony.  But he played this (from his iPad?) during his last break – and we agreed that we love Bonnie Raitt and we love this song.]

[Yes, folks were in jackets for the Salty Dogs the next day.  Forecast was for a 90 percent chance for rain.  When we arrived, we couldn’t believe they were outside.  Here the Super captures her “Missing U at” photo . . . ]

[It was a Saturday, so the regular crowd shuffled in . . . plus there was a wedding and a couple other wedding planning parties, so the place was hopping.] 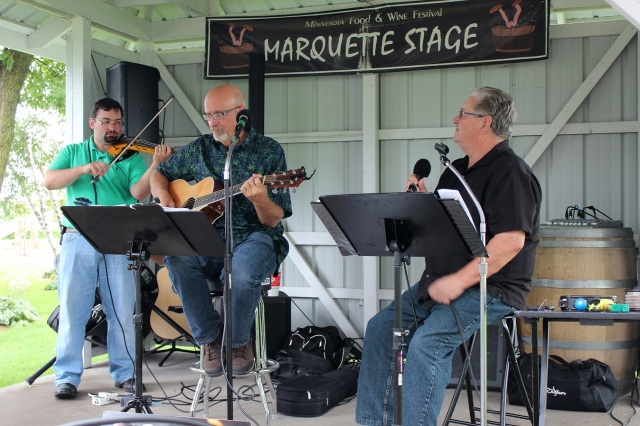 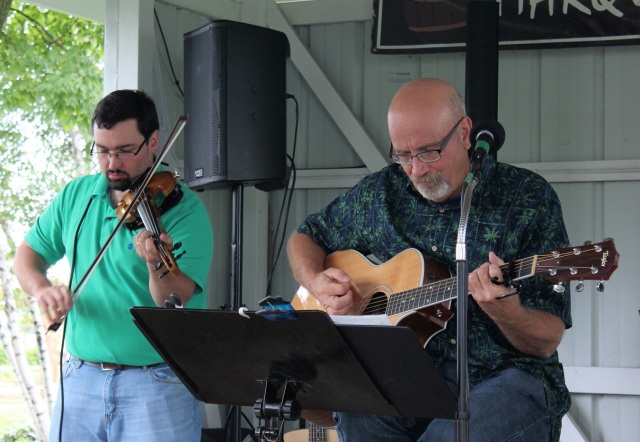 [Did we mention it was windy, chilly, and sticky?  Greg had two bows for his fiddle, but the hair loses tension in the humidity and you can only tighten them so much.  He wore out both bows, but luckily Lesley showed and had another with her.  It’s handy-dandy if your spouse is also a violinist.]

[One of the wedding planning parties consisted of the 2012 (OK, a guess) All-American cheerleading team (OK, also a guess) . . . ] 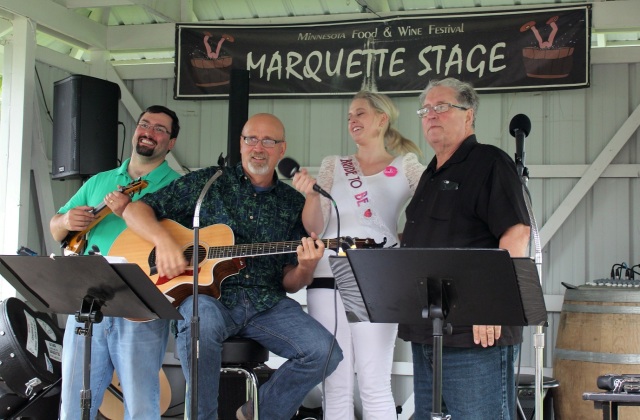 [And a photo by another member of said party.]

[Word on the street had it this video went viral in Renville.  And as you know, you can always trust “the street” as a source because that’s where we all learned about the birds and the bees.]

[Yup, another raw day for the Cheese Bots.  They began setting up inside, but it was suggested there aren’t that many outdoor performance days in Minnesota so they should give it a shot.  Like the previous day, somehow a rain delay never occurred?] 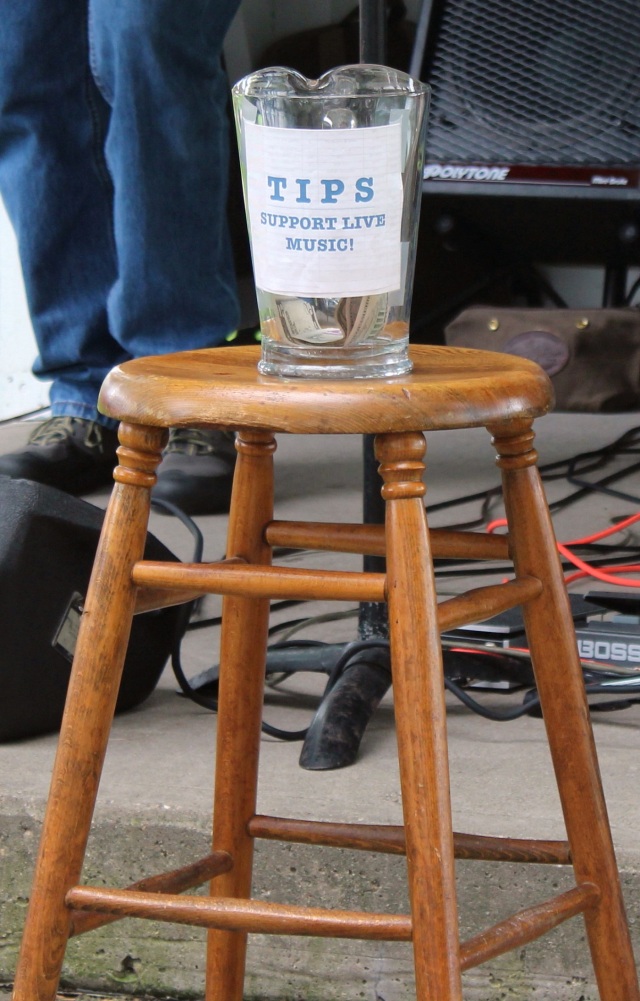 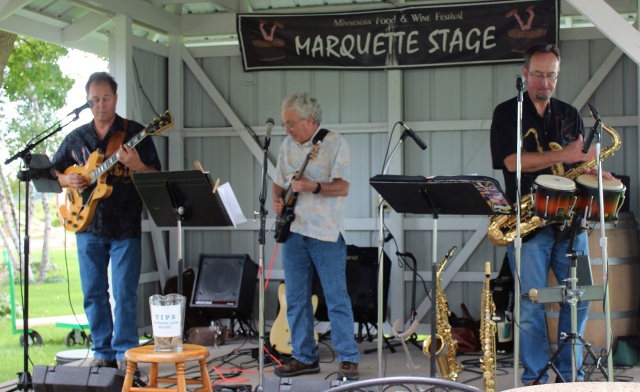 [Barbara and Bob Foss, the keepers of the Alexandria music calendar!]

[Found out Barbara’s birthday is two days before mine.  Oh, and Shelly Karnis was there and we share our birthday.  And the next night Shelly was also at the Andria to watch her daugher Sara perform in Stormy Weather.]

[I hope the guys don’t mind.  They made two attempts at this fast-paced Brubeck classic, but due to circumstances beyond their control were unable to finish.  Jim, “Fromage du Jour,” needed baling wire, super glue, and/or duct tape to keep his music from blowing away.  He was ultimately tossed for a 2-yard loss on the 50-yard line, but everyone appreciated the effort to get as far as they did!]

[See that marquee?  It’s old and getting structurally unsound.  They would like to replace it was a new digital marquee.   So if you have a couple bucks kind of wasting away in an off-shore tax haven, why don’t you pass them along?] 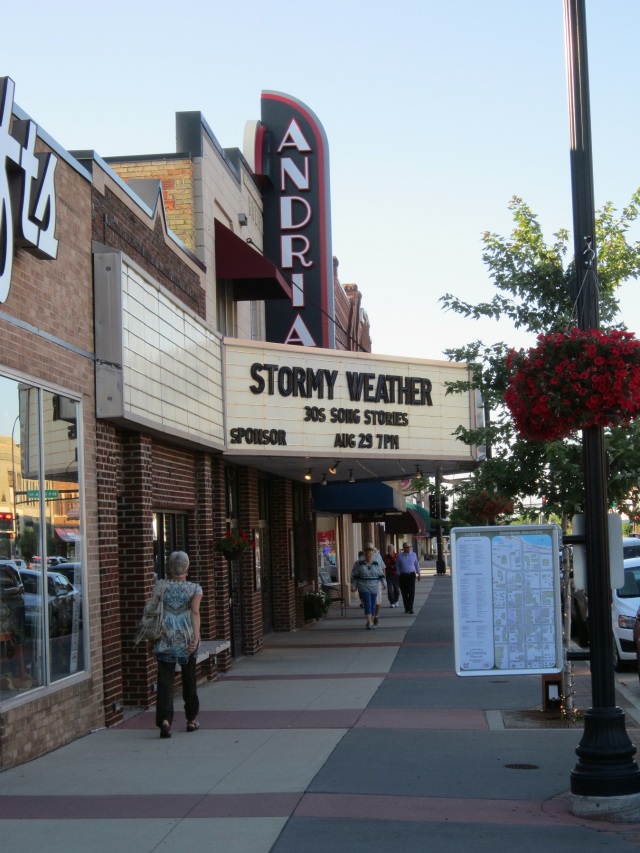 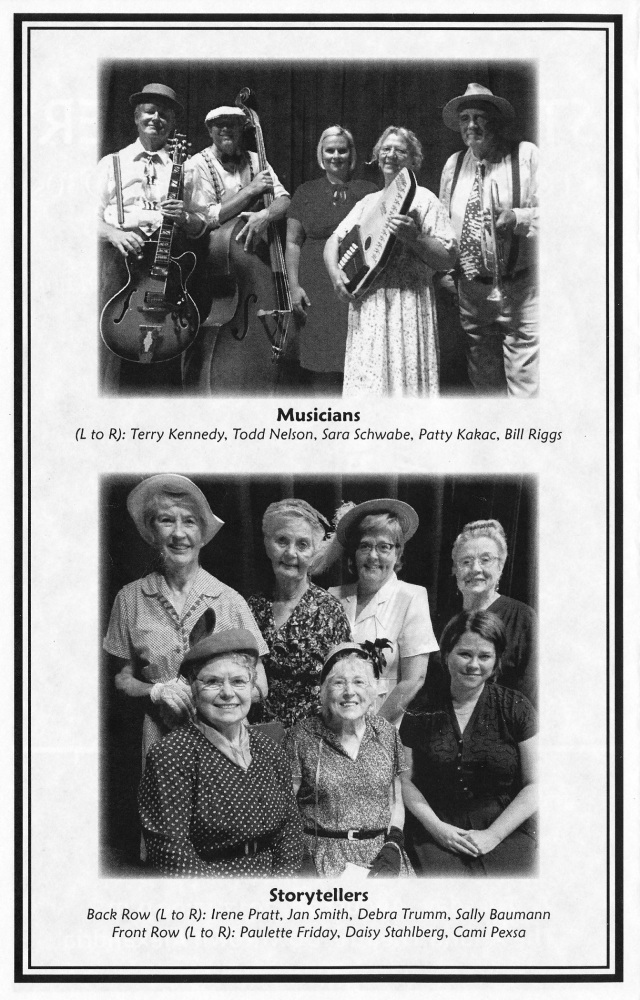 [This was Paulette’s third such period piece, and she and the cast produced another tour de force . . . ]

[They’re not only fun and entertaining, but you get a little history lesson as well . . . ] 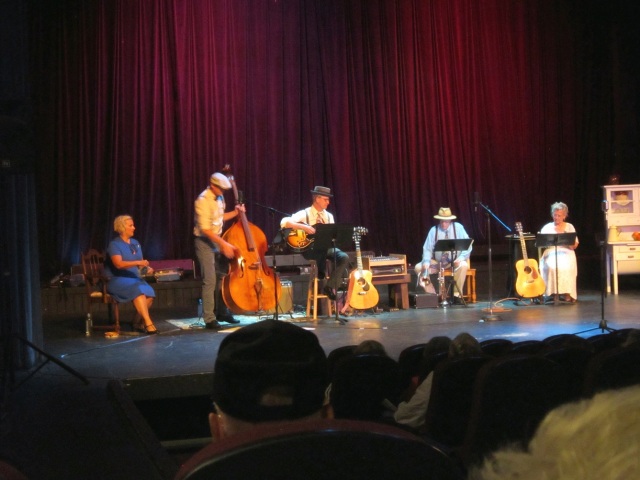 [For example, many locals probably didn’t know that Deb Trumm worked at the Hotel Alexandria in 1936, or that the Andria Theater opened in 1933 with a Star Wars prequel?]

[Many thanks again to you all!]

Friends come and go like waves of the ocean . . . but the true ones stick, like an octopus on your face.  ~  Domesticated Momster