Lands Down Under (Day 7) 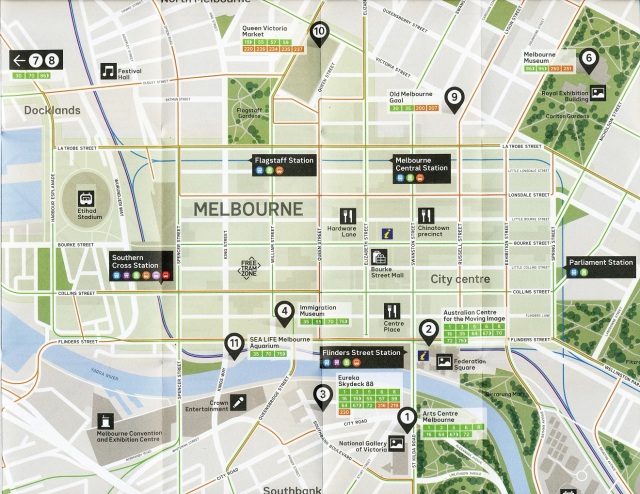 [Before we begin our tour of Melbourne (pronounced:  “mel-bun,” according to our American shipboard travel advisor), a parting shot of some American tourists in Sydney captured by the lens of Bert.]

[And now, Melbourne.  We made no arrangements for any tours, so we just wandered around the city, unattended and unchaperoned.  Here The Biddies are on the bus ride from port to the CBD.]

[We disembarked the bus hard by the Yarra River.  I have reason to believe this is Princes Bridge, the over water extension of Swanston Street.] 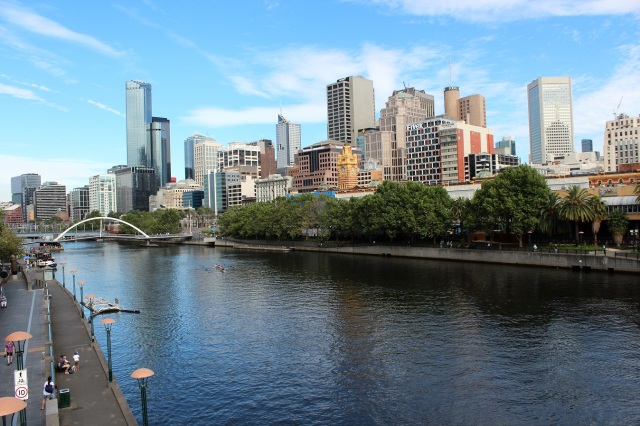 [There’s seems to be a bit of one upmanship between Melbourne and Sydney.  Sydney has a slight lead in population at 4.6 million to 4.4 million – but Melbourne claims to be growing faster.] 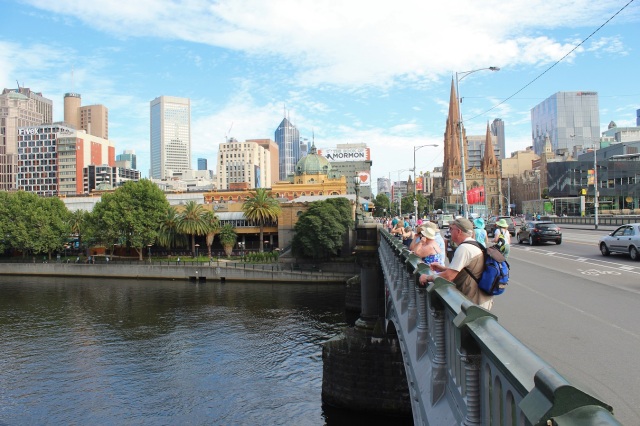 [All the folks Down Under just row, row, row the boat.]

[We were here for the start of the Australian Open tennis tournament.  This is where it’s played.  If you know the history of the tournament, you are aware it is has to deal with mid-summer temperatures, often over 120 degrees on the courts.  Well, the main court is roofed now for a/c.  You may recall the Grosses came to Australia a few days earlier than us and had already spent some time in Melbourne – so Kathy and Bert decided to go to the tennis tournament on this day.] 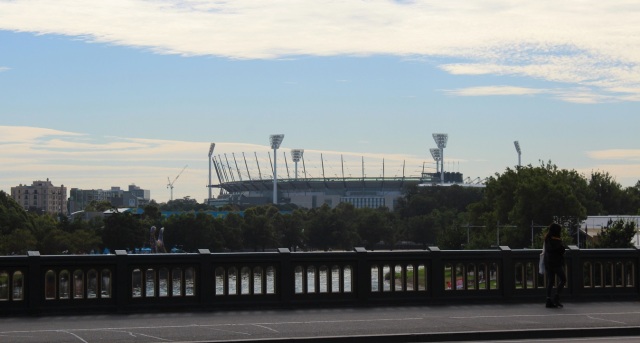 [We all liked the poster.]

[Wikipedia:  Flinders Street railway station is a railway station on the corner of Flinders and Swanston Streets in Melbourne. It serves the entire metropolitan rail network. Backing onto the city reach of the Yarra River in the heart of the city, the complex covers two whole city blocks and extends from Swanston Street to Queen Street.] 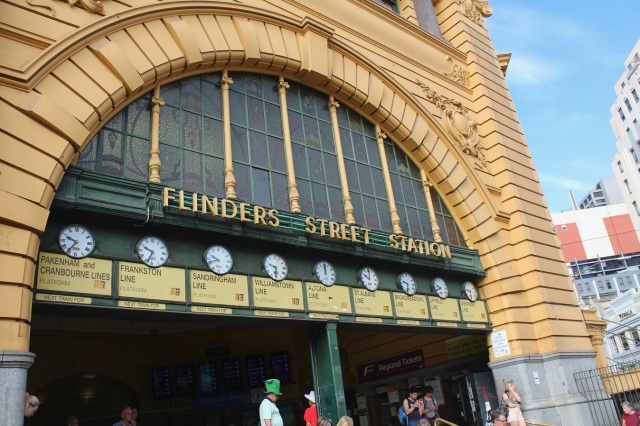 [I think we’re here, and we want to get to there.]

[Views of the city from inside the open-air market for . . . everything!]

[The Biddies and I decided we wanted to take the old hop on-hop off trolley around the city.  We had wandered over here to Parliament House which had a stop for the trolley . . . ] 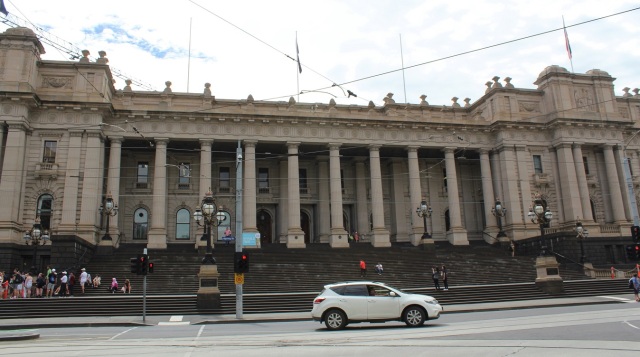 [But it was really hot, standing there on the concrete and asphalt.  As I recall, the trolley was suppose to be on a 20-minute cycle. But after getting cooked for about 40 minutes, we went around the corner and caught the regular metro.  Did I mention it was really HOT?]

[So, absent the classic open air trolley views, we shot photos through the windows as best we could.  But we did see most of the CBD.  This stadium is on the west side of the city – the Parliament House was on the east side.] 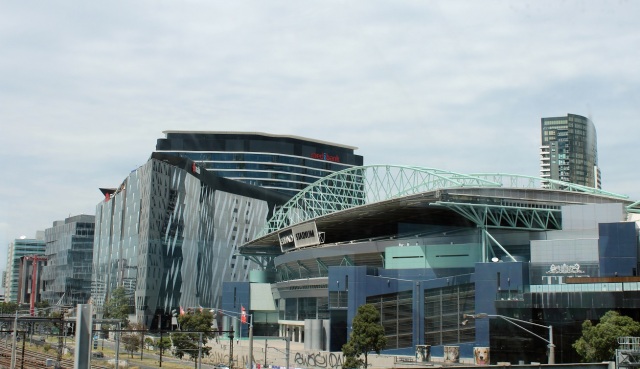 [Our short day in Melbourne was coming to an end.  We were hot, tired, thirsty, and hungry – and then we ran across this place on the way back to the bus.  Had a fun time with the young guy running the place.] 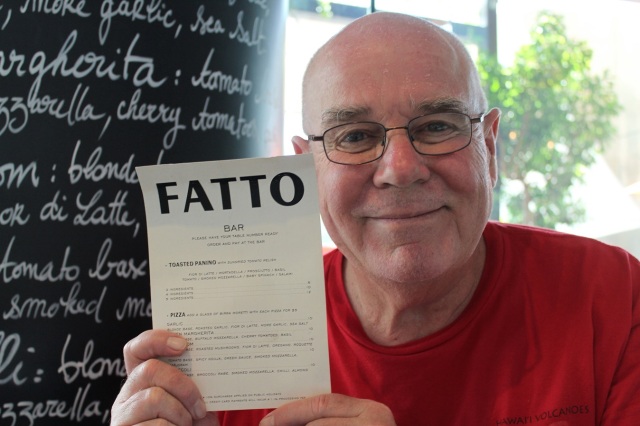 [We got our beverages and split a lovely Margherita pizza . . . and The Biddies caught up with their social media.]

[We were having so much fun at Fatto that the Super chipped in with the next 3 photos.  I believe the Super posted this first one on FB from here.]

[The view from just outside Fatto.] 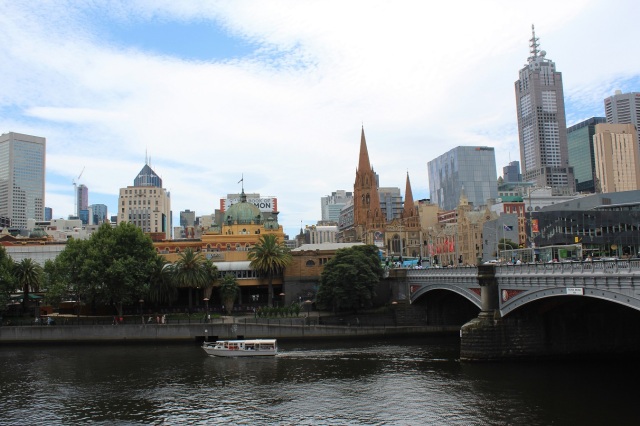 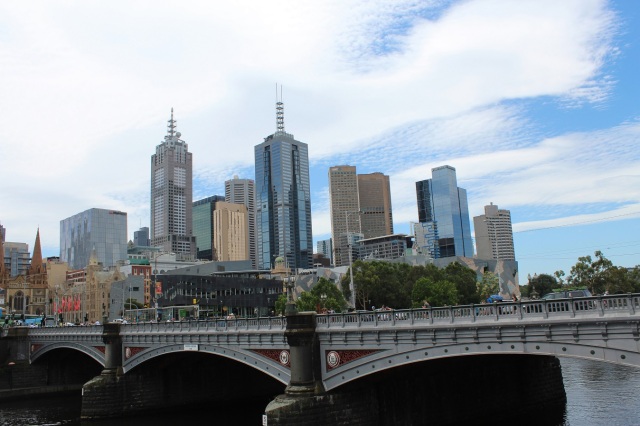 [They told me I was just a tad too old.]

[Our bus stop was in front of the gallery.] 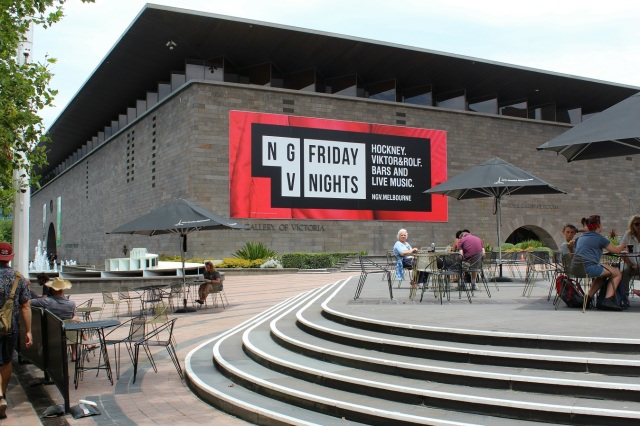 [Back on board the ship, we  were always advised of the day of the week just by stepping onto an elevator.] 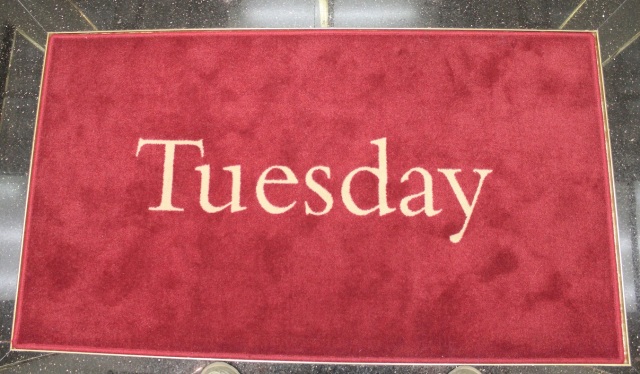 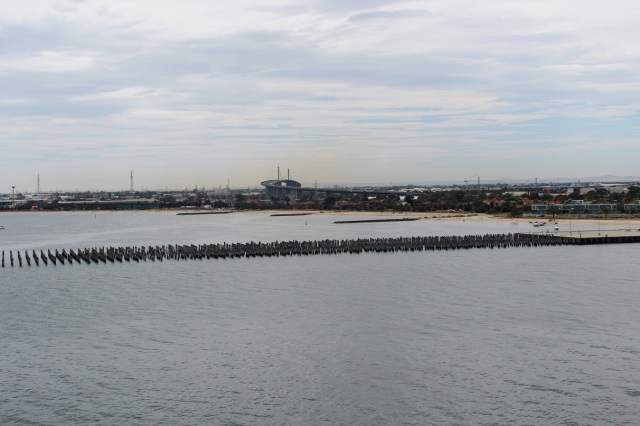 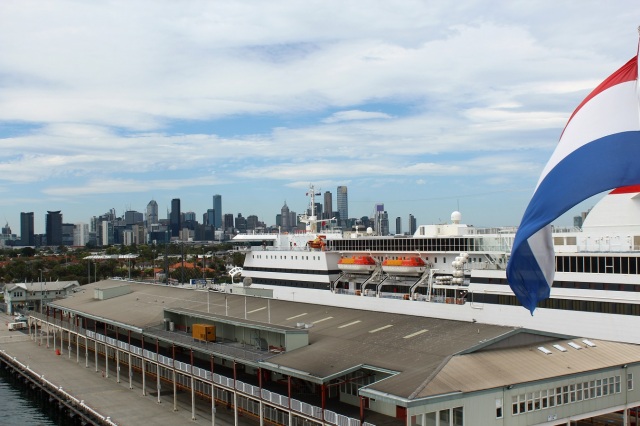 [Our room was right next to the exit door for the deck; Rita and Shari were right next door.  We had a two-room hallway.]

[Turn 90 degrees from where I took the above photo and you have the hallway for the whole length of the ship.]

[The Biddies, now showered and refreshed, donned their robes for a little outdoor window peeping.]

[That’s our back deck.  People really couldn’t see in very well . . . well, I hope they couldn’t because we were making faces.] 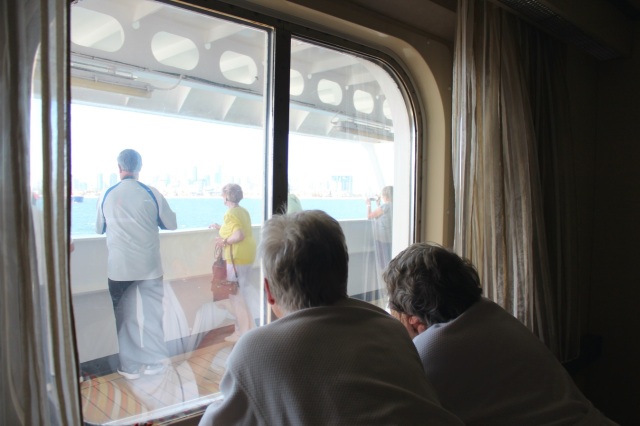 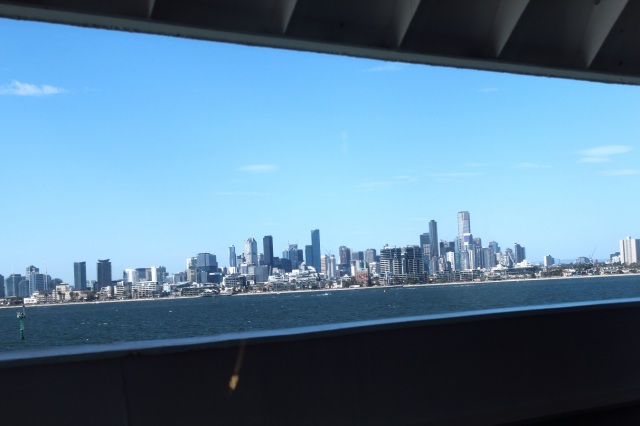 [We were now crossing Bass Strait, in the Tasman Sea, heading for our next port of call  – Burnie, Tasmania.]

Hey, people who travel with their bed pillow.  You look insane.  ~  Jim Gaffigan