[I had no idea what kind of team Rocori had this year (bad pre-game preparation by the cub reporter). They seem to be pretty good perennially.  They came on the floor and I thought they were a college team – their roster listed two 6’8’s”, 6’5″, a bunch of 6’3″ guys?  Then they had striped warm-up pants that made everybody seem another 2″ taller. The captains’ meeting at center court reflected such.] 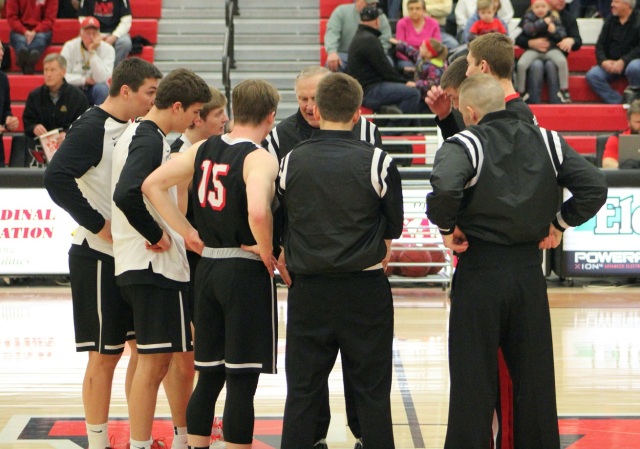 [Those guys are tall!]

[Spencer Hockert (15, just beyond the ref) has a rather bemused look on his face as our Robert Anderson, 6’1″, jumps against their 6’8″ center.  Robert came close!] 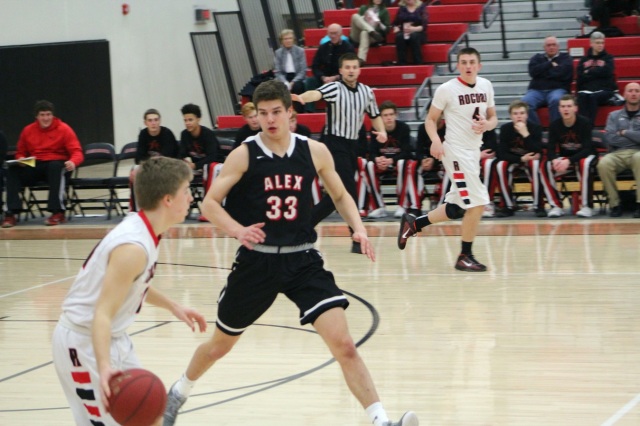 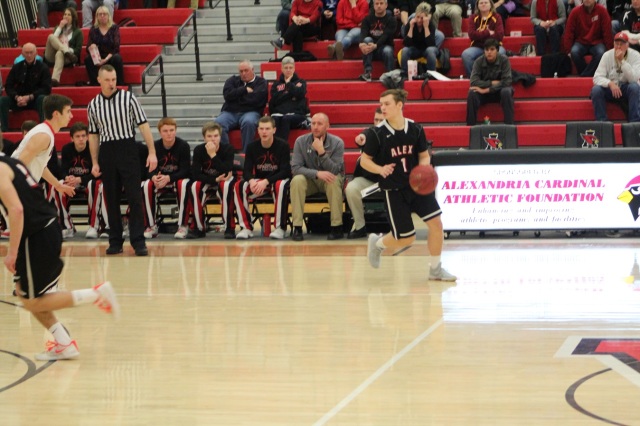 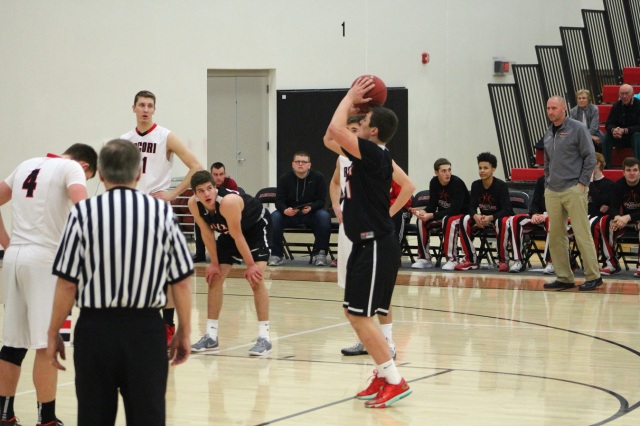 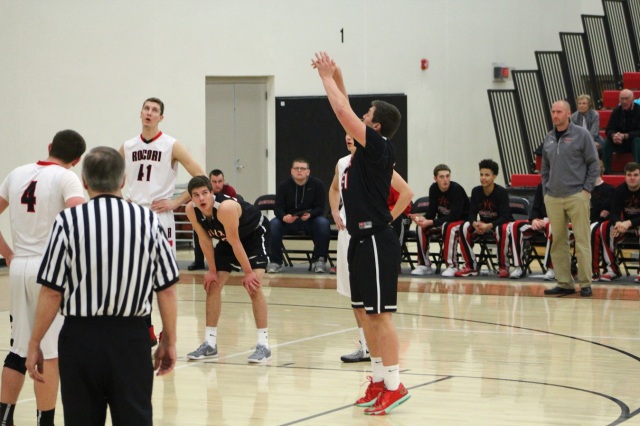 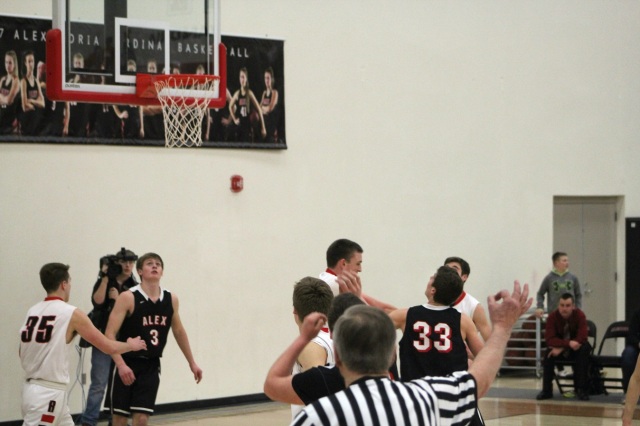 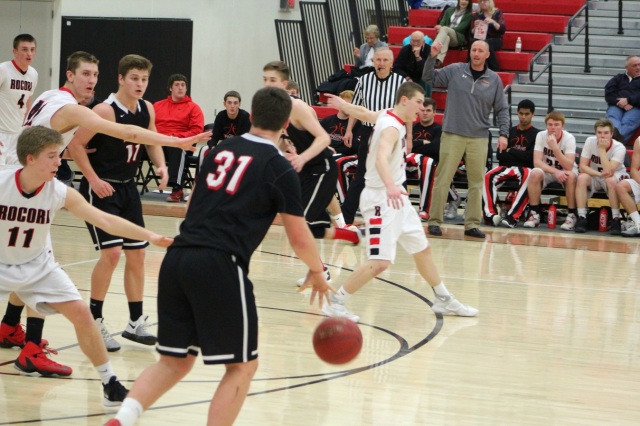 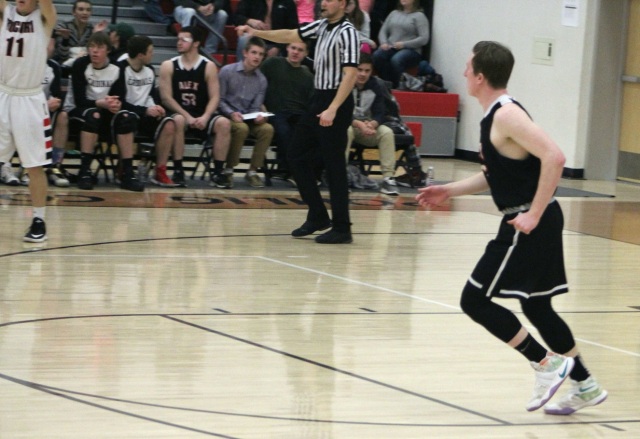 [I think we’re in the 2nd half now.  I didn’t do the halftime scoreboard – we played pretty sloppy in the first half, a bit intimidated by their size, and were behind 26 – 20.] 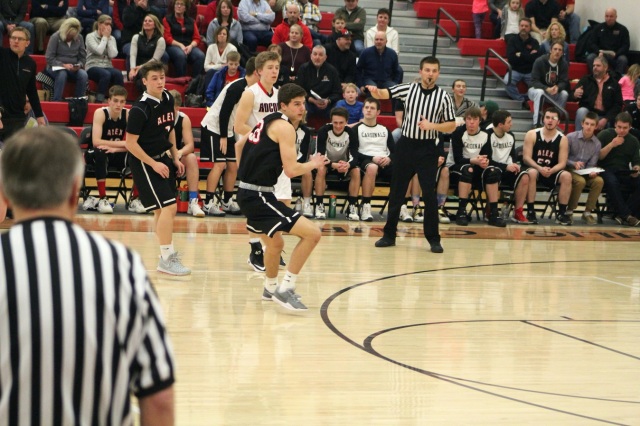 [I think we got fired up at the half and came out on fire.  We caught and passed the Spartans in short order.  We realized they were taller, but we were more athletic.  Our “little” guys were intimidating their shooters as everyone was blocking shots.  And our leading scorer, Spencer, rediscovered his game after kind of a two game drought.]

[Jake always sets our defensive tempo . . . and that gets us going offensively too.] 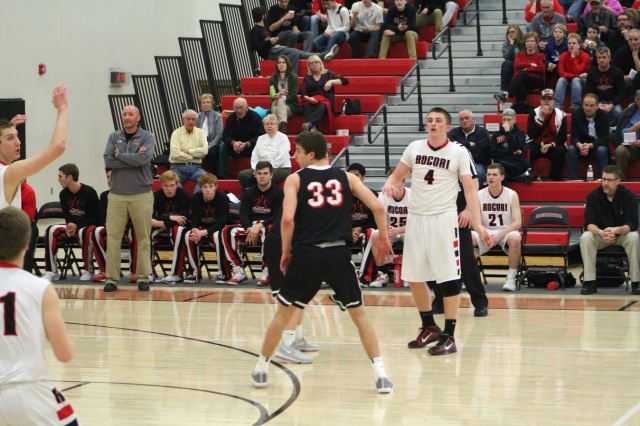 [Jared Schneider (15) has been giving us some good minutes off the bench.] 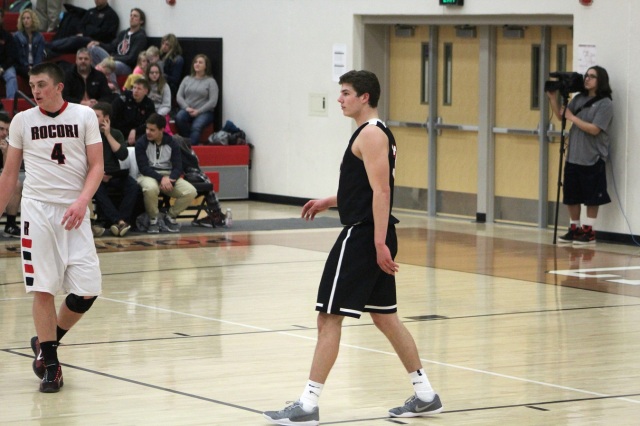 [Balcome and Drew trying to cut off the drive.]

[Maybe not – Jake and Justin are in position for the rebound.] 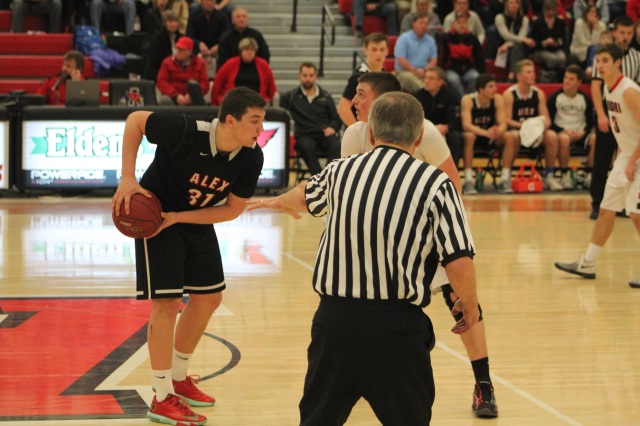 [RED is Remember Everyone Deployed, a salute to those serving in the military.] 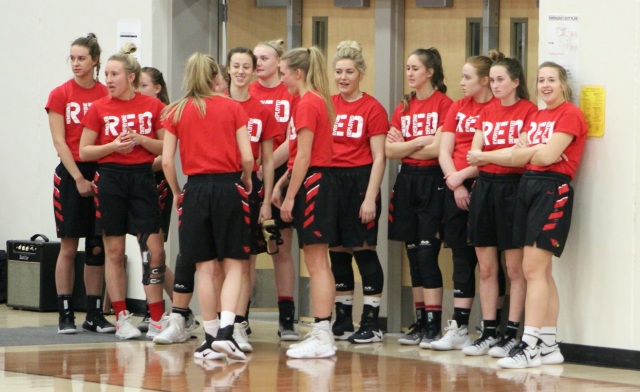 [Good performance by our JV.]

[I did pre-game research on Brainerd.  They’re 3rd in the conference with a very good record.] 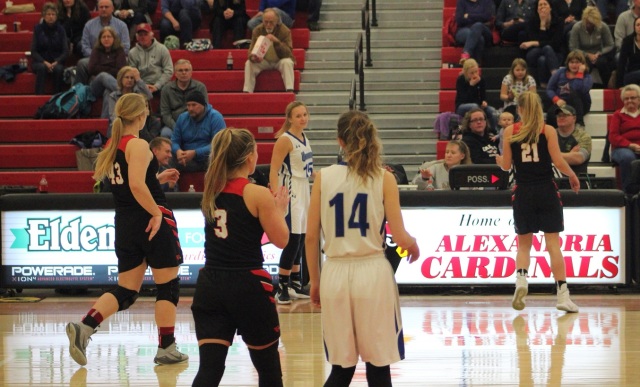 [Kendall Kohler dribbles around a screen by Kayla Feldhake (43).] 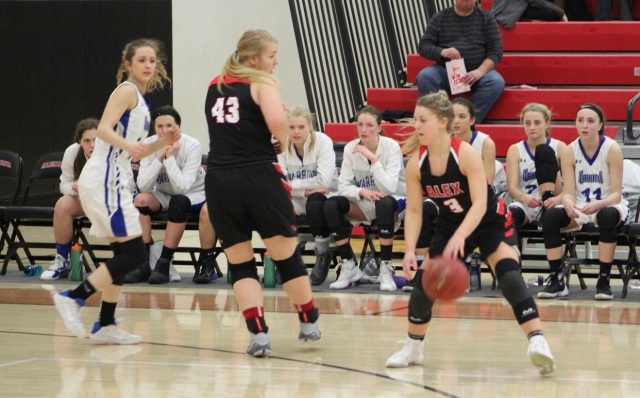 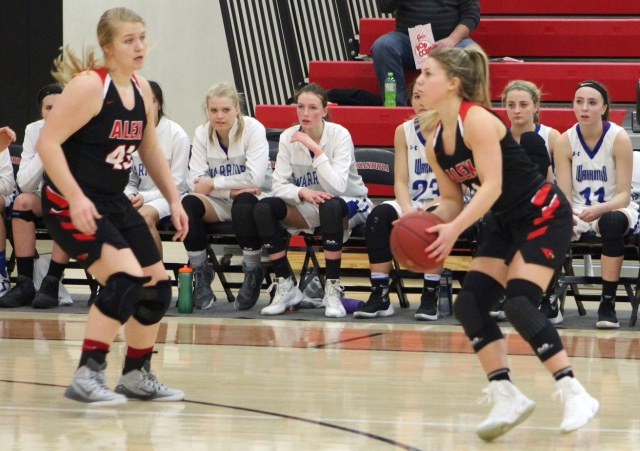 [I didn’t realize Emma Ziegler (1) had broken her nose in the previous game.]

[The Warriors No. 15 I believe made every ‘3’ she attempted in the first half.] 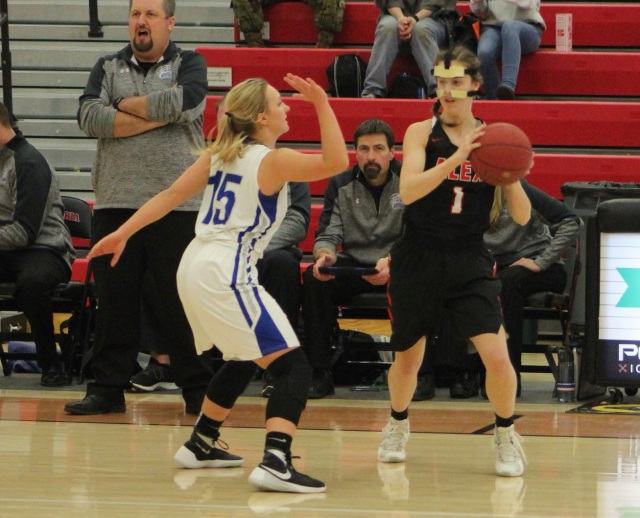 [I think Kayla made all her free throws – I would guess in the double figures.]

[Kendall at the line.]

[Zig drives into the middle.]

[Zig figured it was easier to shoot free throws without the mask . . .]

[Except for the second one because she’ll have to play defense.]

[Our designated 3-point shooter Kara Thomson (23) came through with a couple of them.]

[The players of the game head-to-head here.  The Warriors Kylee Heurung (13), she’s 5’10” and jumped center but she’s a guard, made shots from everywhere including long ‘3’s’. We discovered if we could get the ball into Kayla all game, she would either score or get fouled.]

[Kylee’s shot here probably went in – I spent a lot of the game just shaking my head.]

[OK, we have to stop them, and then make it when we have the ball.  Or at least that’s what I think coaches saying during a time-out?] 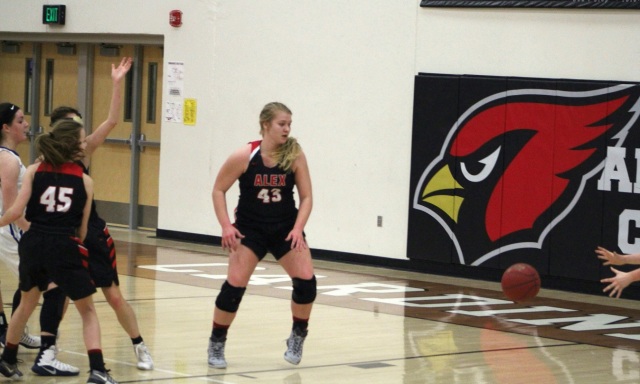 [It was a grind, hard fought trying to overcome Heurung’s 19 points at the half.]

[The Warriors had strong players who handled the ball pretty well.  We couldn’t frustrate them into a bunch of turnovers like most teams.] 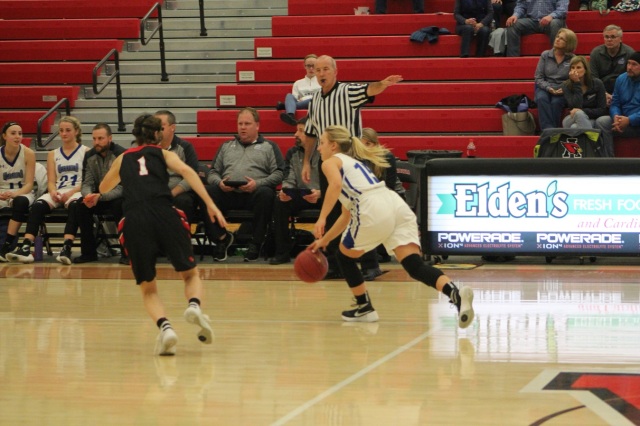 [We have everybody trying to box in Heurung.] 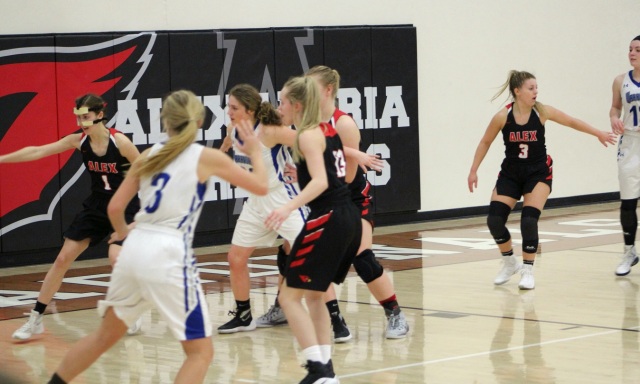 [This match-up went on all game.]

[Schmidty on D.  This was a game in which Kohler was making 2 or 3 substitutions at every dead ball – hoping our depth would eventually wear them down.] 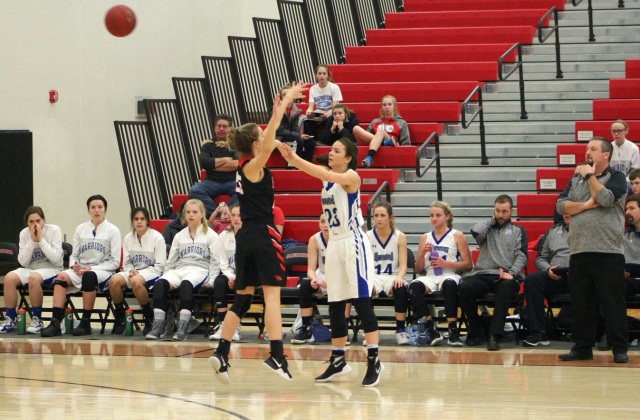 [Will have to start calling her “Ole Automatic” from the line.] 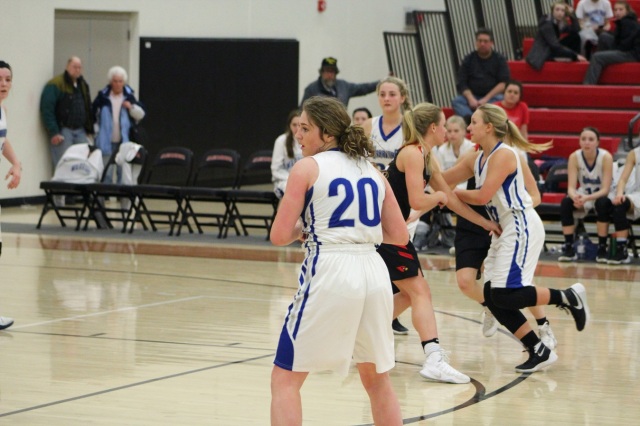 [Here’s Courtney Gould (51), who also head a terrific game.  She did a good job subbing in for Kayla, even to the extent of doing her quick spin lefty layup.  She had 10 points (solid on a couple of free throws) giving us 39 points out of our center position.] 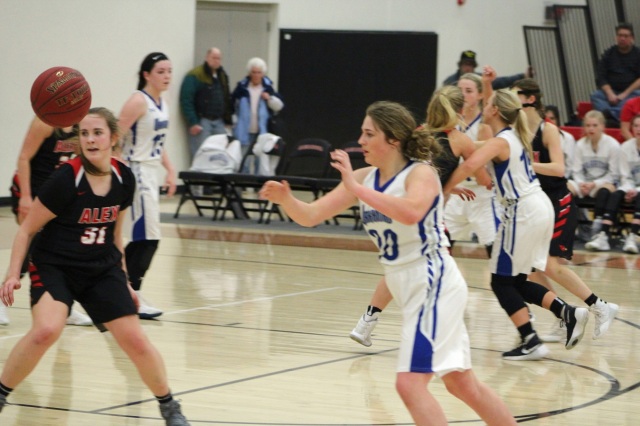 [Kayla at the top of the key with Kendall and Kiyana Miller (21) shadowing Heurung.] 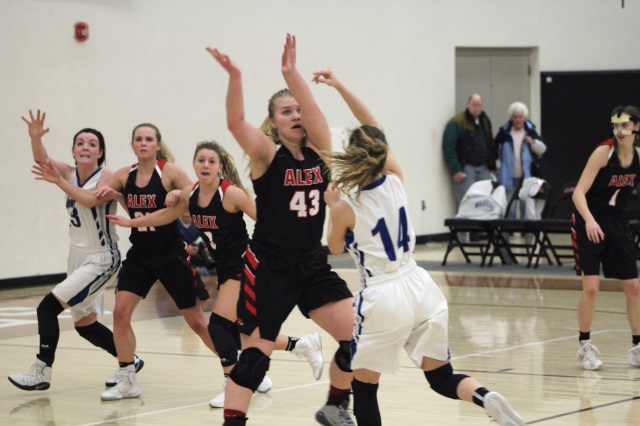 [If you get the ball in open court, just go in for the two-handed, windmill slam dunk!]

[There was disappointing note in the game regarding Macy Hatlestad (No. 11, on the bench in the background in the knee brace).  From the Echo Press:  The Cardinals started on a high note by seeing senior guard and career 1,000-point scorer Macy Hatlestad check in a few minutes into the game. Hatlestad went down with a serious left knee injury at Willmar on Jan. 16, but it wasn’t a full tear of her ACL. That meant there was hope she could return after seeing how she progressed through rehab.

With a brace securing the knee, she was dressed and ready to play limited minutes on Friday night. Hatlestad knocked down a three that drew a big ovation in the first half. But early in the second half while on defense, her leg buckled as she fell to the floor. Hatlestad was helped off the court in tears before spending the rest of the game on the bench with ice around the knee.

The gym went silent after she went down, and that included her teammates who watched on. Alexandria was clinging to a narrow lead at that point.

Here’s to wishing a speedy recovery to Macy.  It’s just a reminder about the vicissitudes of sport.  Our girls’ hockey team got it’s best player back, who had missed the whole regular season with injury, just in time for the tournaments.  But the basketball team lost it’s leading scorer just before their tournament begins.  We have developed the depth to still be good, but of course we’ll miss Macy.] 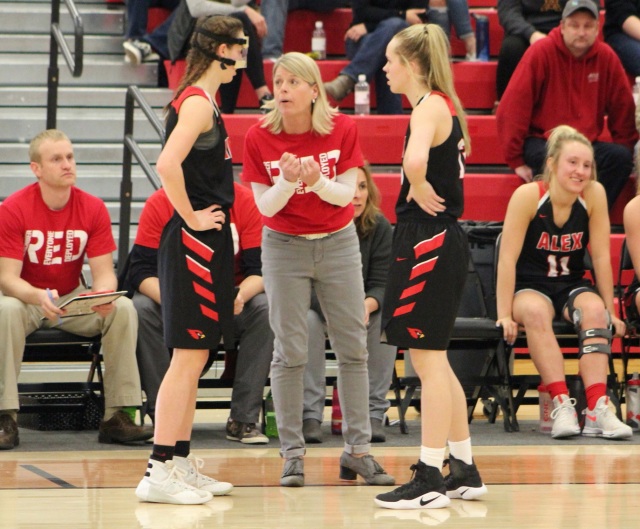 [Kelby Olson-Rodel (13) at the free throw line – Feldhake and Heurung are keeping an eye on each other.]

[Quite a game.  We really had to grind it out against the Warrior firepower.  Heurung was terrific with 33 points.  Kayla had what I am sure was her best game ever with 29 points. This game was close all the way – the gap opened at the end when they had to foul us.  So, congratulations to our Cards who clinched the conference championship with this win – we are still undefeated in the conference with two game left to play.]

I’m a coach who believes in execution. Whenever I see [that player] shoot free throws, I want to execute him.  ~  Rick Pitino