Lands Down Under (Day 2)

Discerning people may wonder why Day 1 of the trip was January 10 while Day 2 was January 12?  Well, there’s this thing called the International Date Line that magically makes days disappear.  We left Minnesota on Tuesday, the 10th, and after a 4-hour plane ride to LA, then a 14-hour plane ride from LA to Sydney, we arrived in Australia on Thursday, the 12th?  We were promised we would get that Wednesday back when we went home.  FYI, Sydney is 17 hours ahead of Minneapolis.

[You can’t tell the players without a scorecard.  Although this photo wasn’t taken until the next day, here is our team.  You may recognize them as members of our France river cruise a couple of years ago:  Bert Gross, Bill Gross, Kathy Gross, Anne Gross, Sharon Coldren, Rita Simon, Ruth Obert, Tom Obert.  Kathy and Bert are from Charleston, WV; Anne and Bill are from Annandale, VA; Sharon is from St. John, VI; Rita is from Nashville, IN; and Ruthie and I are from Vacationland, USA. So there are a brother set and two sister sets – Kathy and I are alone in our own DNA.  There are a couple of well-known landmarks behind us – the Sydney Opera House and the Sydney Harbour Bridge (the “old coat hanger”). 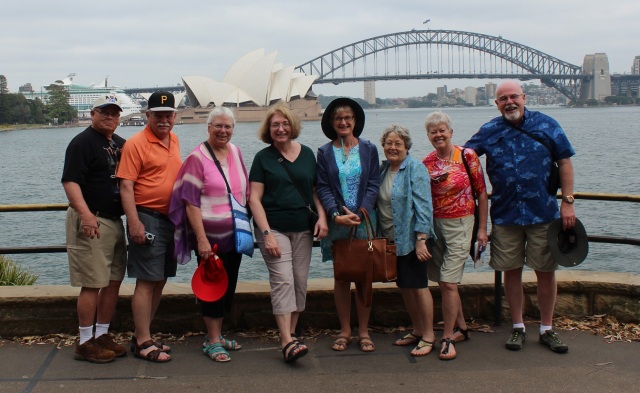 [So, Day 2 (3?), The Biddies arrive in Australia . . . ready to take on any shopping opportunities the continent has to offer.] 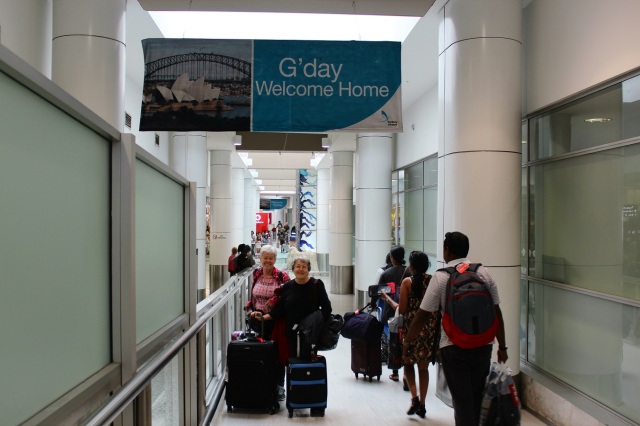 [Our airport shuttle into Sydney dropped Reetz at the Intercontinental where she shared a room with Sharon.  The Super and I then went on to something in our price range – the No-Tell Motel – a couple blocks away.] 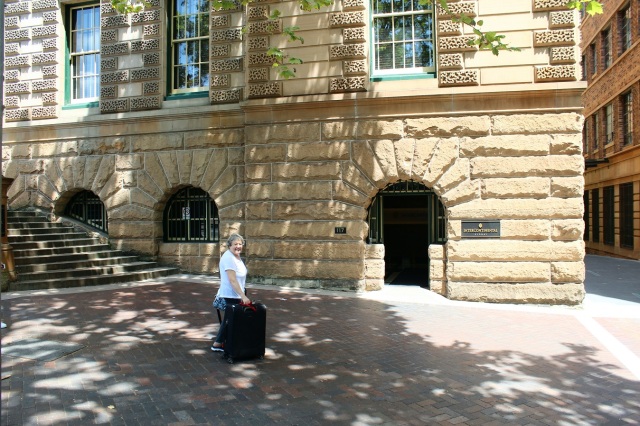 [Sharon then joined us for the two block walk to the waterfront at Circular Quay while we waited for the arrival of the Gross families.] 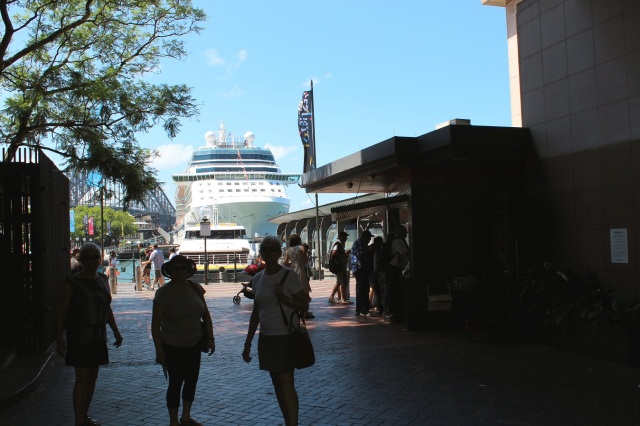 [Things are always happening at the waterfront.  This is not our cruise ship, but it’s where we would board ours in a couple of days.] 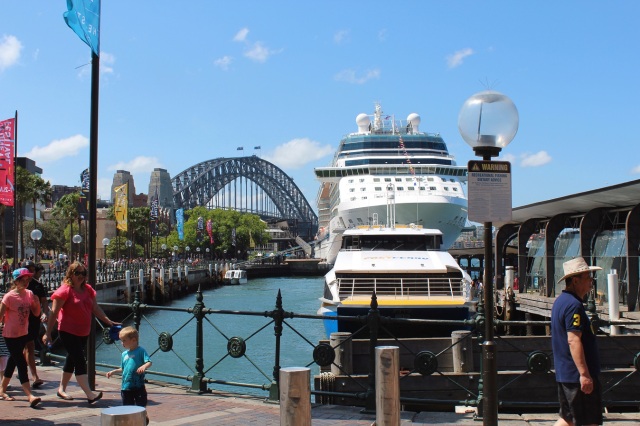 [These ferries come and go non-stop.]

[Realizing these attractive models were available, I decided to shoot a Foster Grant ad.] 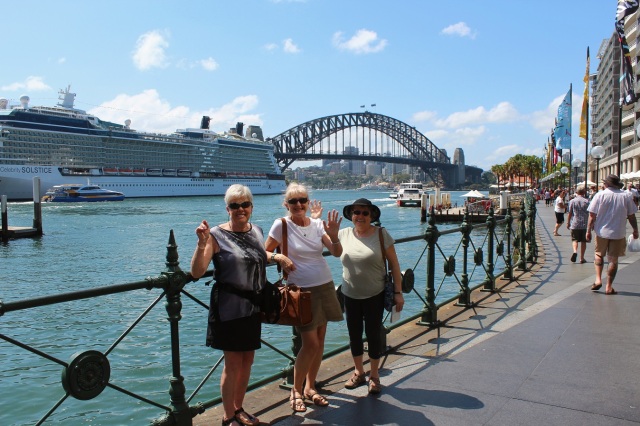 [Circular Quay in Sydney Cove . . . our home away from home.] 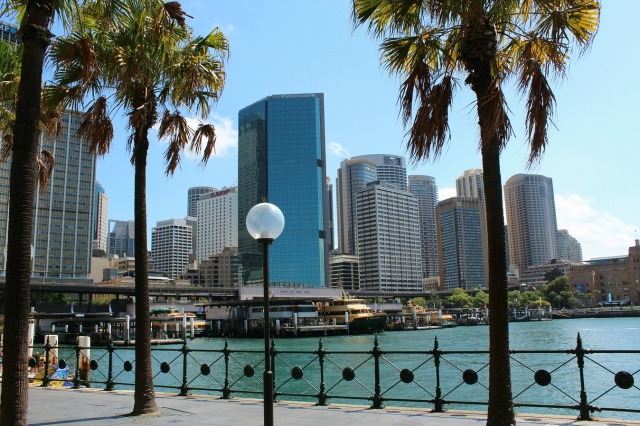 [An American tourist was spotted looking for photo ops . . . ] 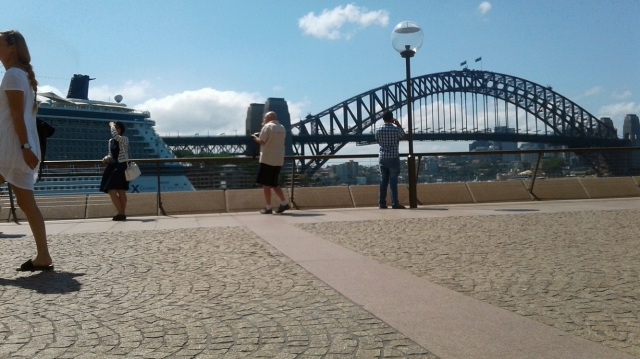 [This must have been one of his photo ops.] 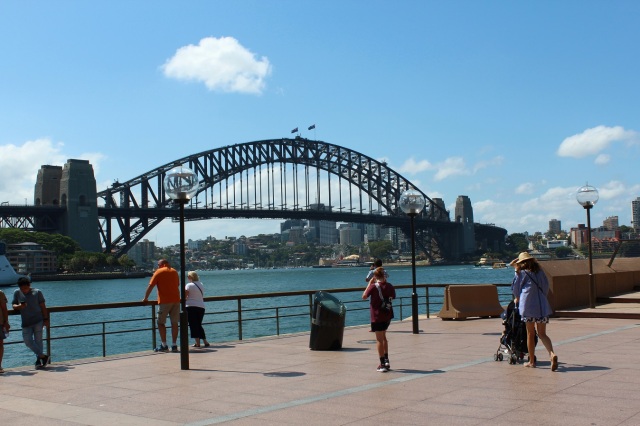 [See all those folks on top of the old coat hanger?  Well, they’re all nuts!  Groups go up and over the top of the bridge all day long . . . in lieu of  nap? Anyway, you can find these goings on on YouTube – it’s scary enough just watching let alone doing.] 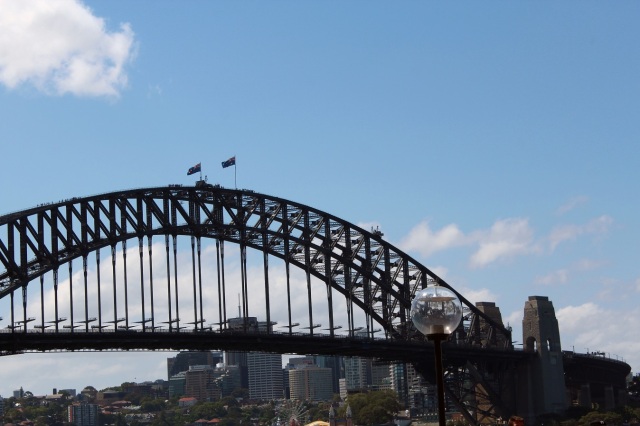 [Just thinking of going over the top of the bridge got me seeing yellow.]

[But I wouldn’t take a wombat out in this heat!  Every day in Sydney was hotter than the normal body temperature!] 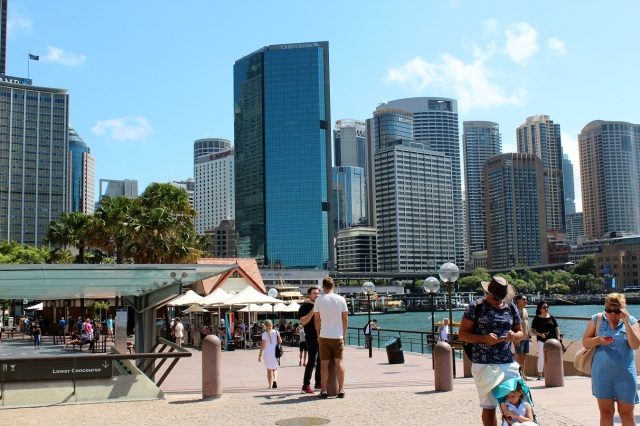 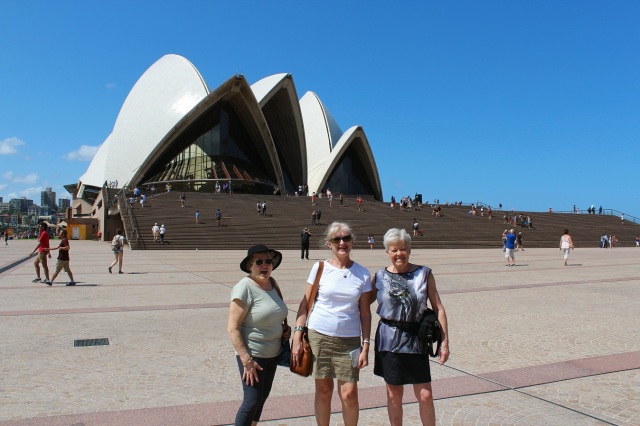 [We were told (nay, warned) we would take hundreds of photos of the Opera House from all angles and in all light conditions.  And I succumbed.]

[2016 was the 200th year of the Royal Botanic Gardens through which we were about to take a train ride.] 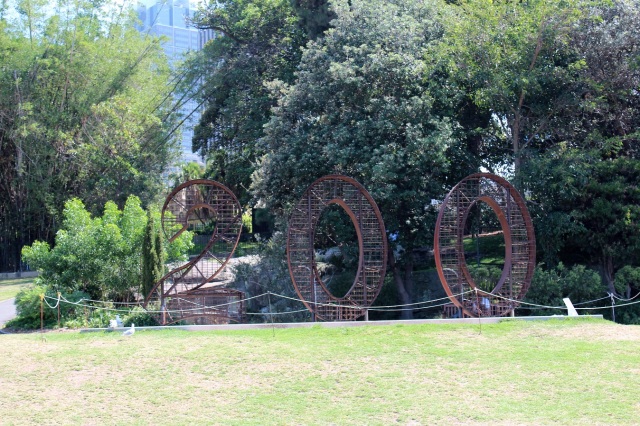 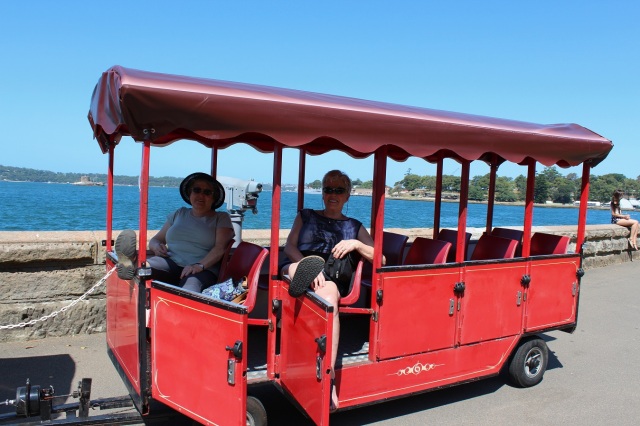 [While we waited train departure, I hiked up the thousands of stairs on the Opera House side of the Garden for more photos.]

[Bert and Kathy, as they are wont to do, went to an opera at the Opera House later that night (or was it the next night).  They are big opera fans.] 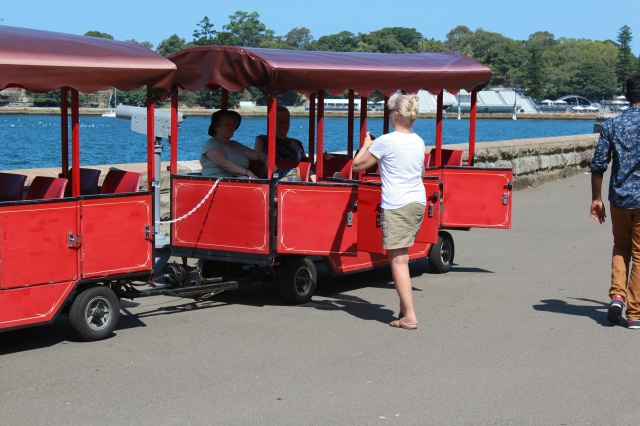 [I was just looking for shade.  In our rush to explore, I left my hat back in the hotel.  And I paid for that over the next two weeks.  Bad burn on the dome with lots of shedding.  The Super kept rubbing vitamin cream on my pate . . . I don’t really know why?] 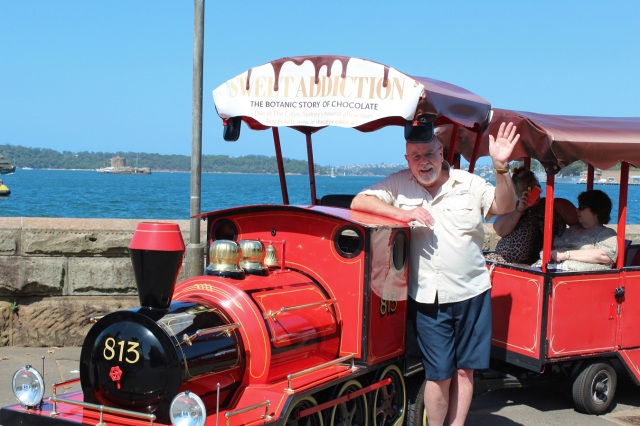 [This tree has all the appearances of a Moreton Bay Fig.  They are massive.] 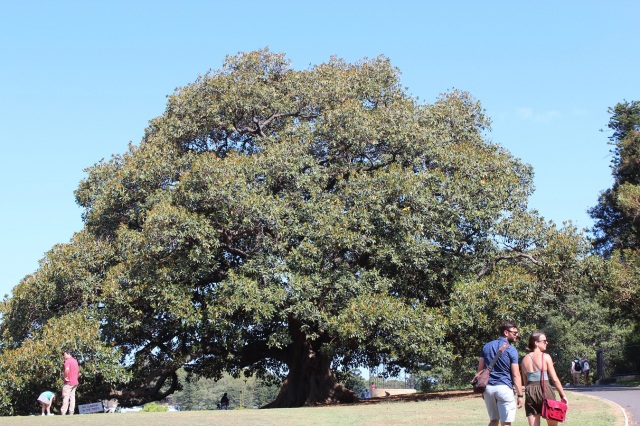 [As you know, Australia was founded (well, for Europeans) as a penal colony. Here’s the first penal.] 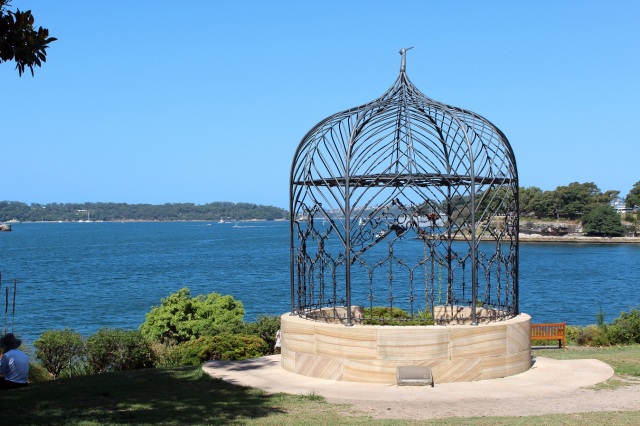 [‘Tis a lovely day to be in Australia.] 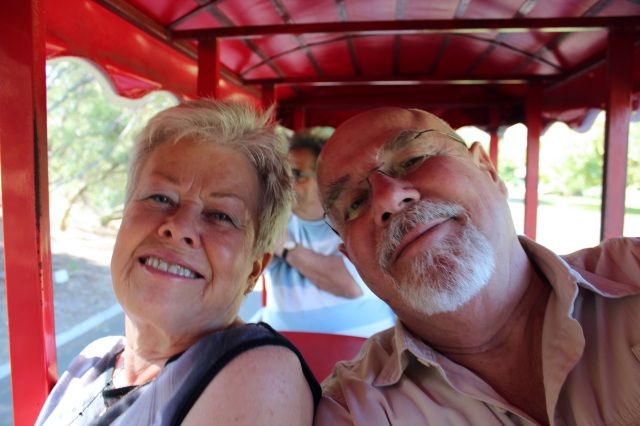 [When discovered in August 1994, the Wollemi pine was hailed as the “botanical find of the century,” like “finding a small dinosaur still alive on earth.” It was found by New South Wales National Parks and Wildlife Service ranger David Noble during a weekend bushwalk into a remote 500-600 meter deep narrow sandstone canyon in the rugged and densely forested Wollemi National Park only 200 kilometers (125 miles) northwest of downtown Sydney, Australia. Thus this strange tree from the “ancient” past, a new genus, was formally named Wollemia nobilis.  (Wollemia nobilis: A Living Fossil and Evolutionary Enigma by Andrew A. Snelling, Ph.D.)] 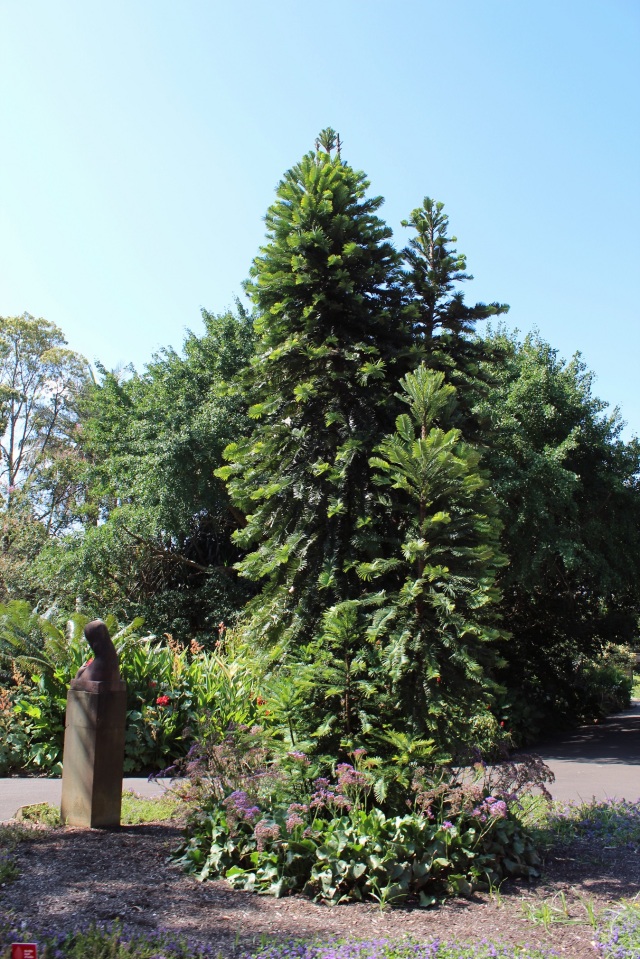 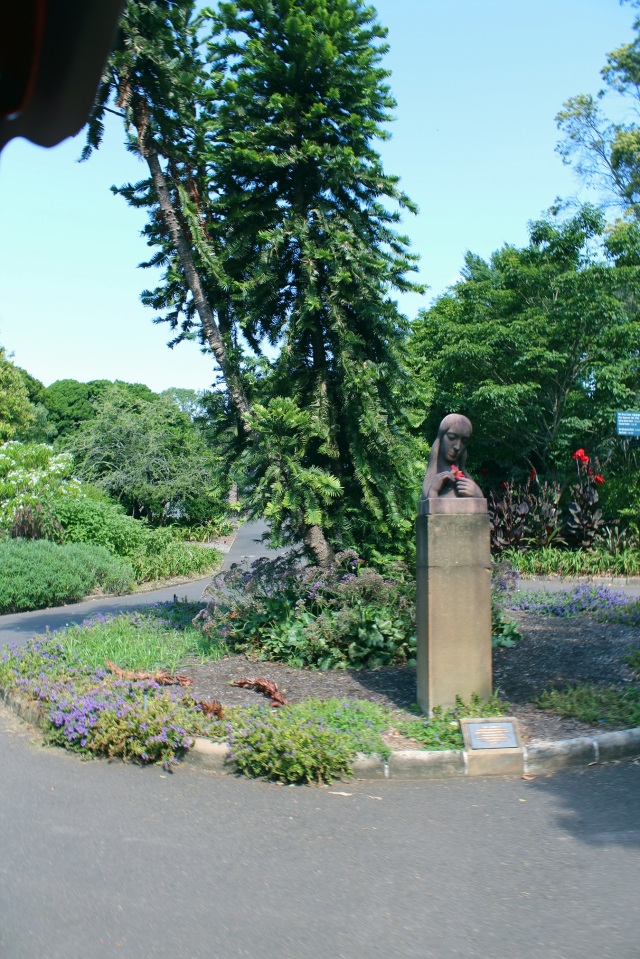 [I believe there is a Norfolk Island Pine in there somewhere.  They are ubiquitous throughout Australia and New Zealand.] 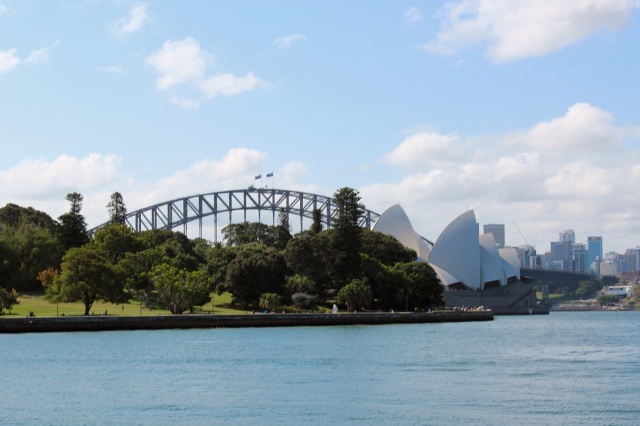 [Sydney Tower is the second tallest observation tower in the Southern Hemisphere after Auckland’s Sky Tower.  Sydneyites will remind you, however, their main observation deck is almost 164 ft higher than Auckland’s.] 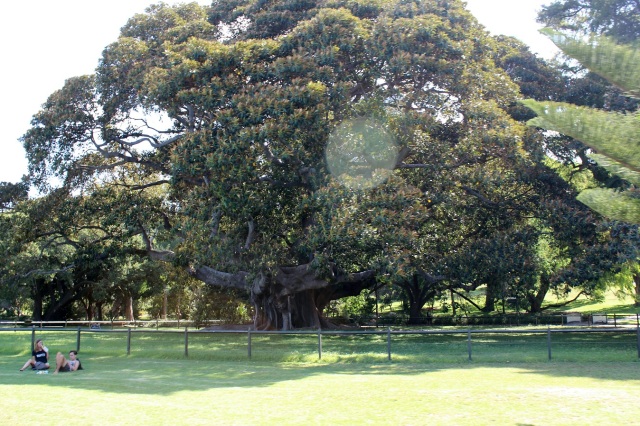 [Looking across Farm Cove to Mrs. Macquaries Point.  We will go there another day.] 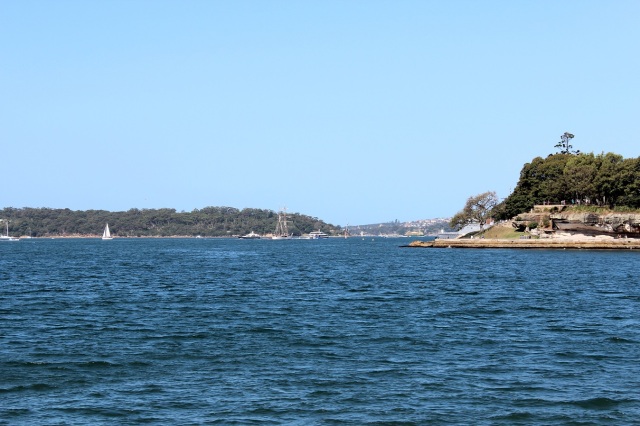 [Our lunch venue, looking the other way.] 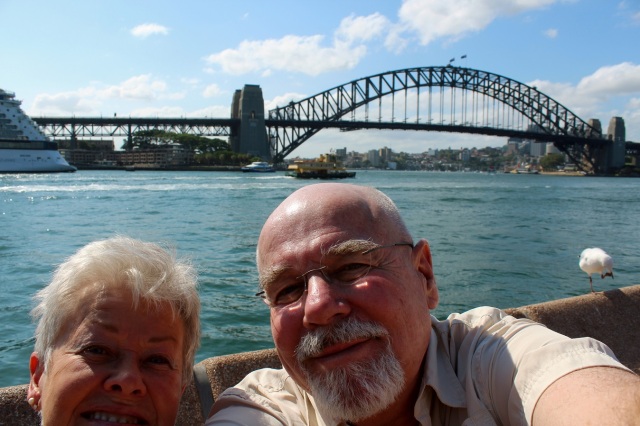 [Hi!  My head will soon peel like a ripe avocado.]

[I think capturing the bird in flight was an accident.] 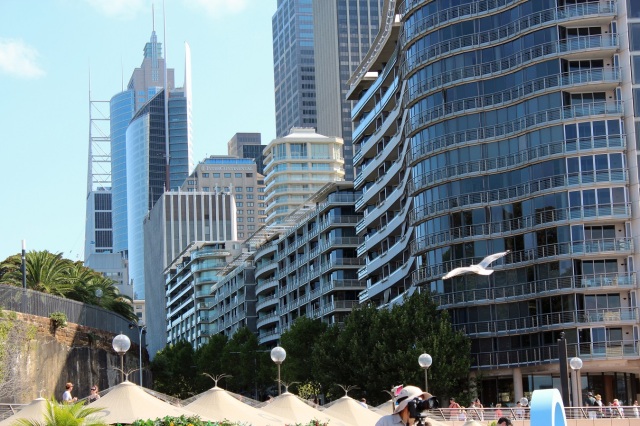 [A one-legged Silver Gull stopped by for a lunch visit.  When I asked if it was tough just having one leg, he/she replied, “No worries, mate.”]

[Nothing but the best bubbly for our Intercontinental ladies!] 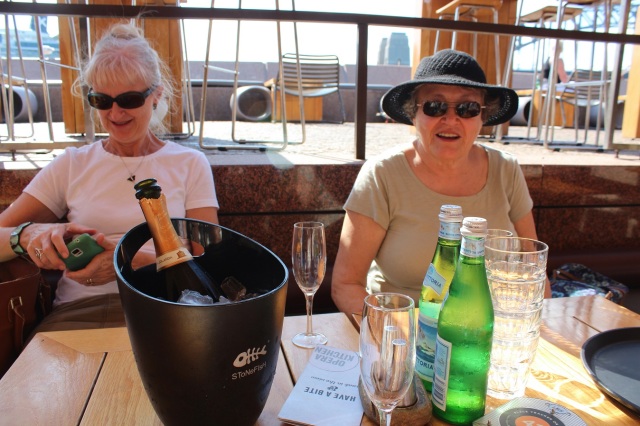 [Not from our room?]

[Perhaps the most Australian of all fish varieties, Barramundi gets its name from the Aboriginal language meaning “large-scaled river fish.” It’s served in restaurants across the country.  Best pan-fried or seared skin-side first (rarely battered or deep fried), it’s often dished up as a fish steak with a herbed oil.  We all had it several times during the trip.  On the other hand, this may be something totally different – some times stuff all looks the same when it’s all gussied up.]

If the highest aim of a captain were to preserve his ship, he would keep it in port forever.  ~ Thomas Aquinas

2 Responses to Lands Down Under (Day 2)