Uffda, Such a Game!!

An overview (because an underview is strictly within the purview of the auto mechanic):  I’m not really a football fan, lost interest years ago when it, like so many other things, gave in to total commercialization.  If you see a game above the high school level, it is a series of commercials occasionally interrupted by a 3-yard off tackle plunge, followed by yet another TV time out.  But high school football remains mostly above that (though ads are now read over the PA during game directed time outs and our field has a corporate name), and it’s local – you actually know the people involved.  And, as an older person, I will admit to being a fair weather fan.  If attendance requires being outside in inclement weather, I’ll likely stay home and watch a PBS mystery series with the Super.

But this year is different, and we knew it would be.  Through the first five games the Cardinals were 5 – 0 and averaging over 50 points a game.  We were a juggernaut with terrific players at all the skill positions – we could move the ball and score by land or by air.  Then the old bugaboo that is the bane of football started to strike – injuries.  We had our biggest offensive output in game 6 and continued our unblemished season – but we lost Micah Christenson, our running back who had already rushed for over 1,000 yards, to a high ankle sprain (recovery generally 6 weeks minimum) early in the 2nd quarter, and his relief runner, Chandler Cole, was also lost around this time to an ACL (season).  For game 7, we moved our leading receiver, flanker Cody Faber, to running back, and he had a terrific game as we won again. But we missed him at flanker.  Game 8 was a show down with also undefeated St. Cloud Tech, but we were now also minus Will Odland, our senior middle linebacker.  With Cody mostly back at flanker, we moved a tight end into the backfield, mostly to be a blocker.  We had  no running back – in fact, sometimes quarterback Jaran Roste was alone in the backfield.  When he is the only offensive option, we, like any team would be, were easier to defense.  We lost a hard fought game, 26 – 19, to finish the regular season with a 7 – 1 record.  But were still the No. 1-seed in our section.

After a first round bye, we hosted the Moorhead Spuds, again, as they easily dispatched Bemidji in the first round.  Moorhead was on a roll after beginning the season with an almost all new team from the previous year.

[The dreaded Spuds take the field.]

[The Card coaches keep an eye on ’em.] 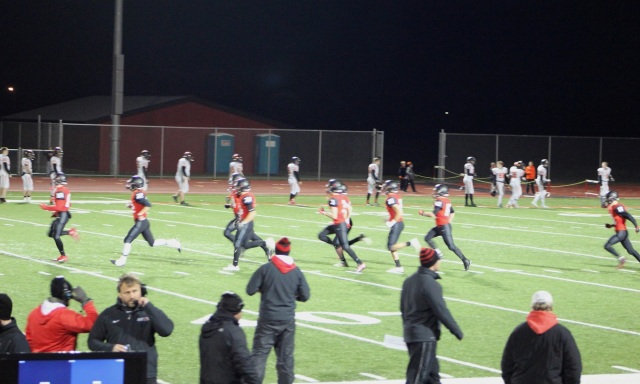 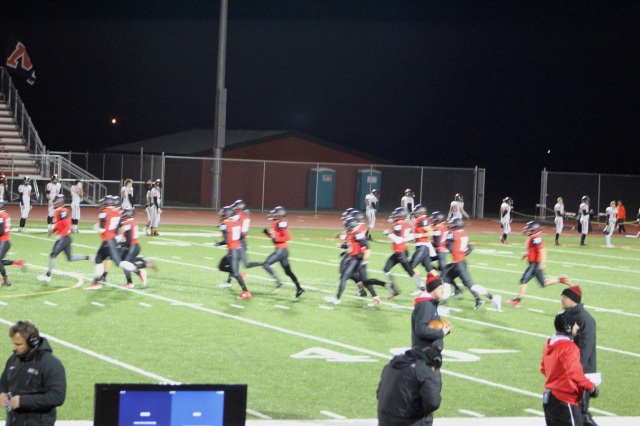 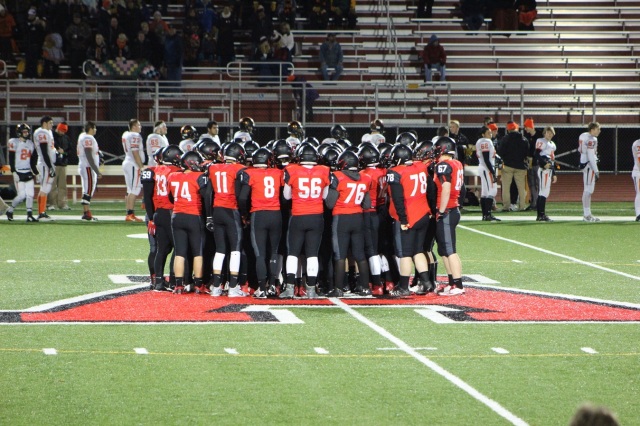 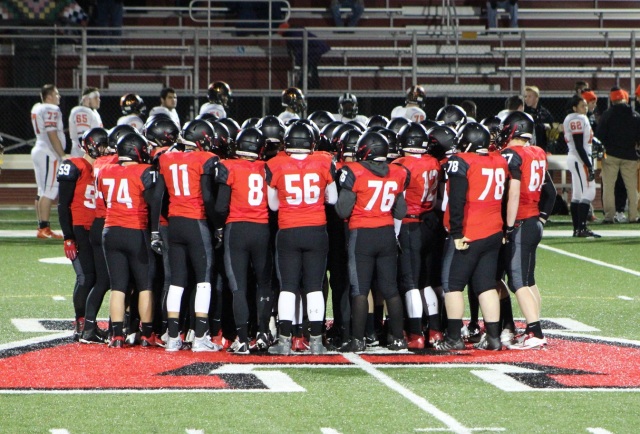 [And the player introductions, which led to an October surprise.] 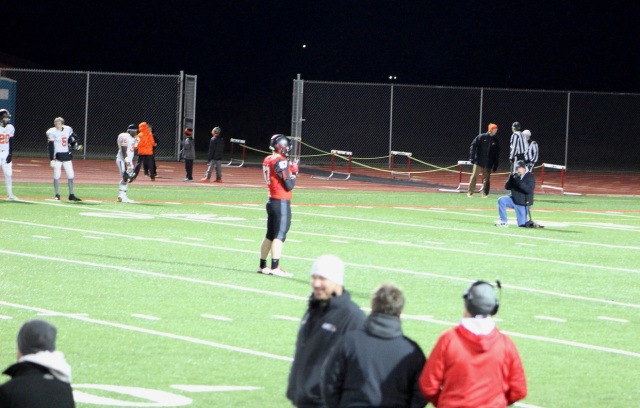 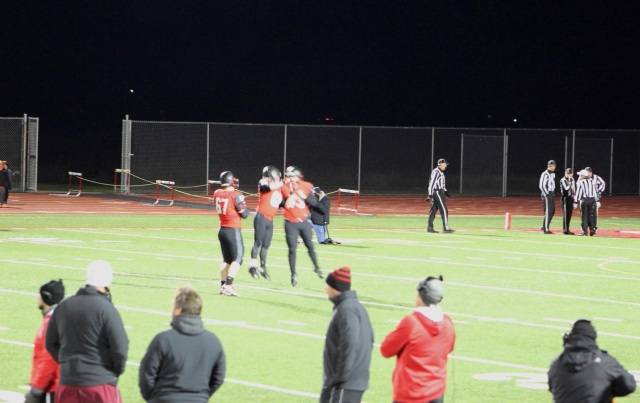 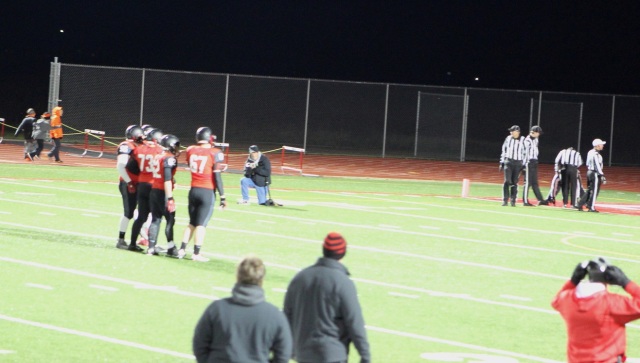 [Micah (22) was introduced with the starting offense -he was not expected to be available.]

[As the players align for the Anthem, you can see how fandom is dressed for a late October game . . . ]

[Classmate Brad and I arrived as Inuit ready for a narwhal hunt.] 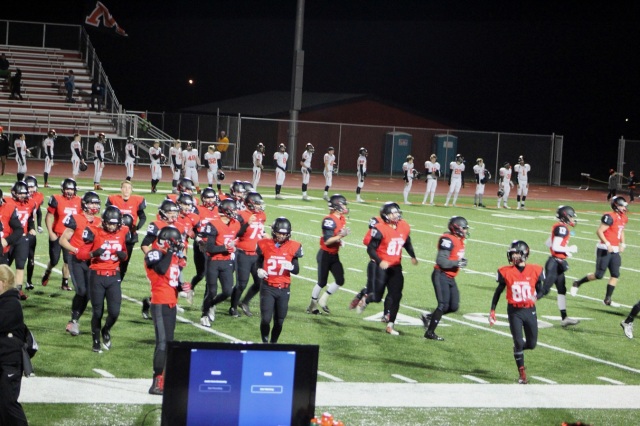 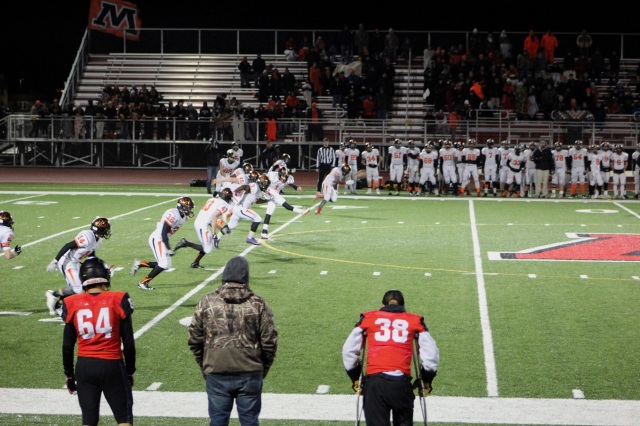 [Roste fires a pass.  The evening chill really affected the air game.  Both sides dropped passes and potential interceptions.  And the quarterbacks had trouble making accurate throws.  The Spuds hardly passed, recognizing such, but featured two strong running backs.  And their running game dominated most of the first half.  Our defense is not big so is susceptible to such – but it was even more so than usual.  I finally realized our big guy, nose tackle Dan Oberg, 293 pounds, was not even suited up.  A further injured player I was not aware of.]

[Micah did not start.  It appeared that if we didn’t need him, we wouldn’t use him.  The Spuds scored in the 1st quarter on a long, time-consuming drive, and early in the 2nd quarter on a 78-yard burst up the middle by their halfback.  We needed Micah.  With him as a threat in the backfield, Jaran (1) broke off our longest run of the game right here . . . ] 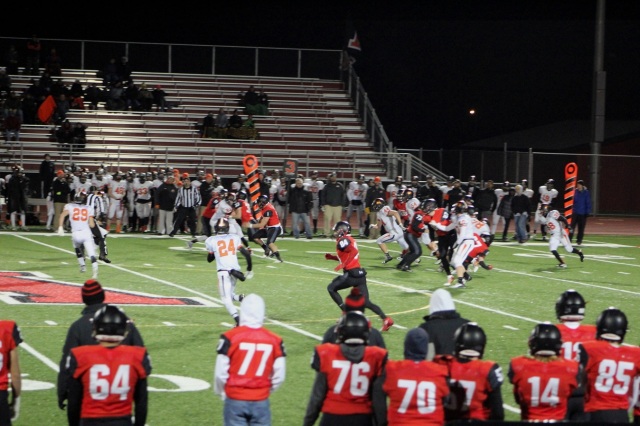 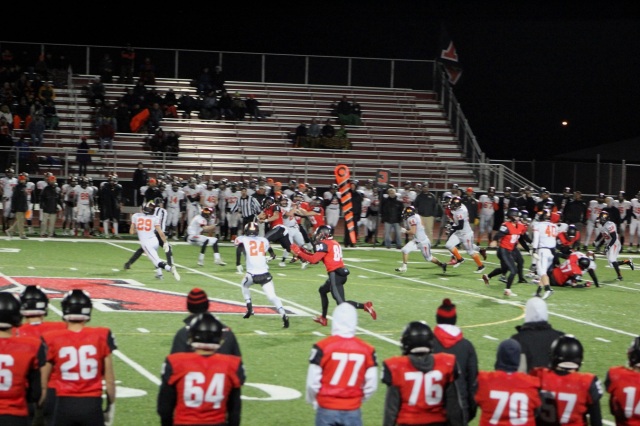 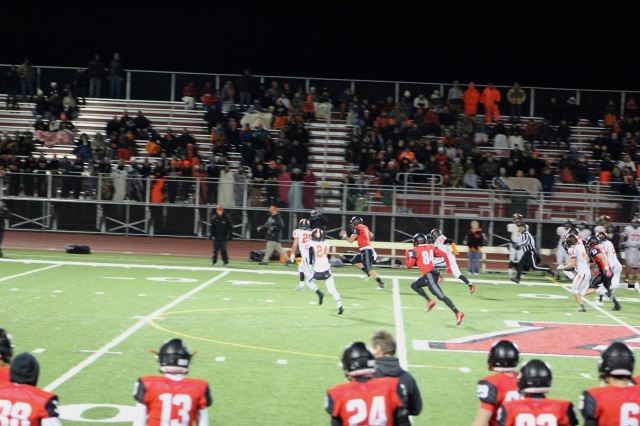 [After the Spuds 2nd touchdown, our long ball wide receiver, Spencer Hockert (84) returned the following kickoff 91 yards untouched for a touchdown.  Our special teams have been outstanding all year – particularly on punt and kickoff returns.  But they are usually handled by Micah and Cody. Absent Micah, we can still turn to Spencer.]

[The Spuds scored again to take a 21 – 7 lead at the half.  The only offensive spark the Cards had shown was when Micah played – you can see an attitude change on the team when he’s in the game.  He was able to play little – he carried 9 times for 43 yards, not bad but not quite his 12-yard per carry average when he was healthy. He re-aggravated his ankle twice, the 2nd time coming out of the game not to return.  Nevertheless, the Cards came out for the 2nd half with a fire in their belly.  The defense swarmed, the Spuds did not get a first down in the 3rd quarter, and Jaran threw a 10-yard TD pass to Cody.

[Then in the 4th quarter, with Micah looking on from the sidelines, Jaran scored on a 3-yard run to tie the game.  And just previous to that, Cody went out of the game after taking a hard hit.  He was told to take his helmet off – he was done for the game, and the Cardinals were out of running backs.]

[The Spuds got their offense cranked up enough again to score and take a 6-point lead – the Cards blocked the PAT attempt.  The Cards had time, about 4 minutes, and began a drive with two straight 3rd down conversions.  Then the play of the game – and season.  A long pass from Jaran up the left sideline was deflected by a couple of Spud defenders right into Spencer’s hands, and he turned it into a 73-yard TD reception.  The game was tied, a PAT conversion would likely win the game for the Cards – I think there was less than two minutes left in the game.  But we botched the snap.  Arrgghhh!  We were going to OT.] 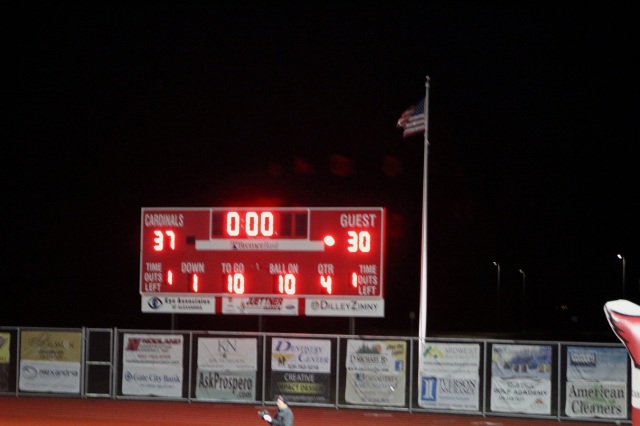 [In overtime, both teams get 4 plays from the 10-yard line.  Both teams kicked field goalson their 4th play in the first OT.  In the 2nd OT, Jaran threw a 10-yard TD pass to Spencer – except the ref ruled he was juggling the ball when he went out of bounds (if you see the Voice of Alexandria video, it sure looks like a TD).  Jaran, obviously upset with the previous call, then stormed to a 10-yard TD on the next play.  The Cards then led 37 – 30 as the Spuds took the ball.  When the Spuds 4th down pass attempt in the 2nd OT was batted away by the Cards, the team stormed the field . . . ] 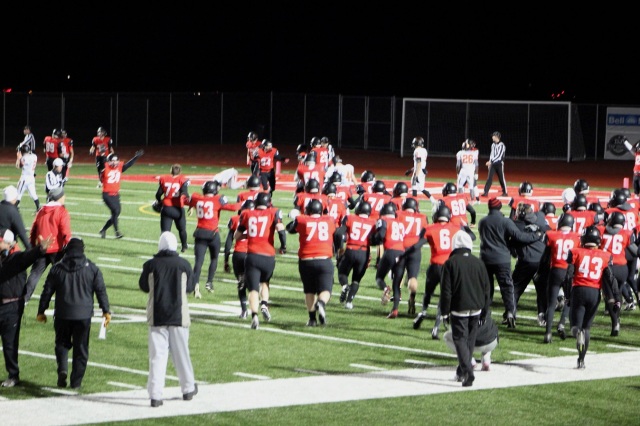 I have not the least sympathy for these useless and destructive pastimes, football and politics.  ~  Cesar Aira

Up Next:  The Netherlands