Summer camp . . . that time of year when you pack up and leave your perfectly comfortable retirement lake home to drive 450 miles in 7 1/2 hours to enjoy a week of non-air conditioned discomfort with 115 people you generally see just this one time of year.

Before we left:   A little song, a little dance, a little spritzer, down our pants . . . 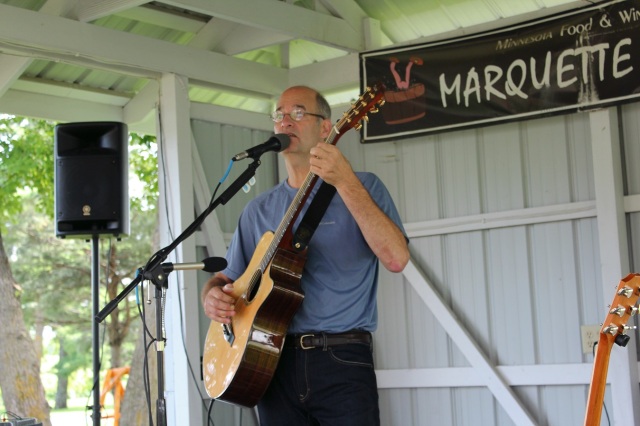 [Of course, Anthony at the winery.]

On the road to camp . . .  Again, this is the Super’s Indiana University alumni camp in Elkhart Lake, Wisconsin.  We have been partaking of Camp Brosius most of the time for over 20 years now, but we are pikers compared to the Super’s sister Rita, from Nashville, Indiana, who I believe is up to 33 years, and our friends from Fort Wayne, Vickie and Scott, who just completed their 37th year.  The camp operates, for campers and their families, for 8 weeks over the summer.  There is a weekly turnover of from 115 – 140 people, and we have been in the 8th week group for many years now.

[Our first day’s destination was New Holstein, about 12 miles north of Elkhart Lake.  We stayed in a $50/night mom & pop motel because there was no lodging available in Elkhart Lake.  But we were close enough to go into Elkhart Lake for an evening of music on Saturday and for 1:00 check-in at camp in Sunday.] 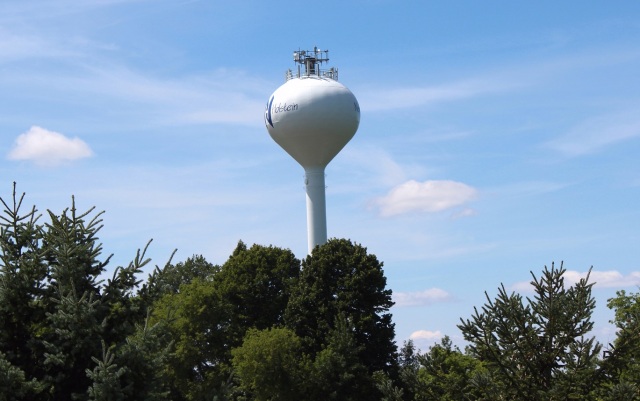 [Then on the road to Elkhart Lake – County Road J, that is.] 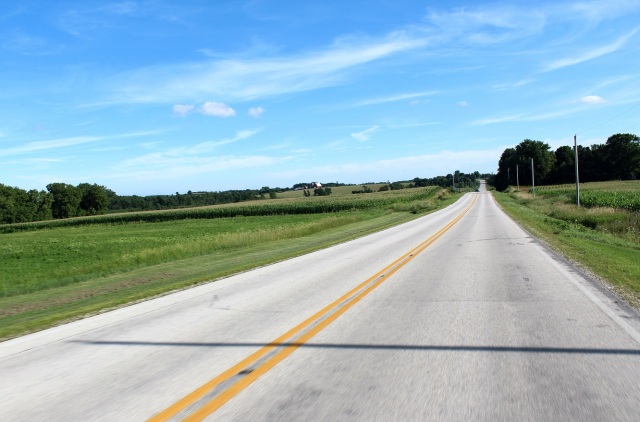 [New Holstein at the top with Elkhart Lake just below, both equally positioned between Lakes Winnebago and Michigan.]

[Home of the Midwest Acoustic Musical Festival, 2106, at the Lake Street Cafe.]

[You don’t really think I’d remember all the groups, did you?  I do remember this group was from Chicago, their first appearance here, I was indifferent to their music, but they and all the musicians were doing this without pay (other than the organizers passing the hat) for the exposure.] 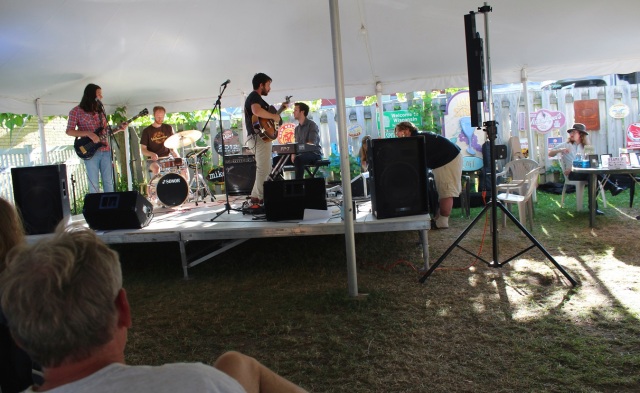 [And one must eat, too!  The Super a margherita pizza; me a three-soup combo.]

[A sketch artist was there, offering to draw any or all for $10 (as I recall).  She sat in front of us to sketch this group (well, duet) on the stage.  It looked good, and she did about 6 of them while they were performing (each group got 45 minutes).]

[And they were our favorite performers on the evening.  Their name?  I forgot.]

[During a music break, I ordered one scoop – seriously!  I ran into an old guy at the cash register who had the same thing.  He said, “I see you ordered the single scoop, too!”]

[And we had the waffle cone maker in the background.] 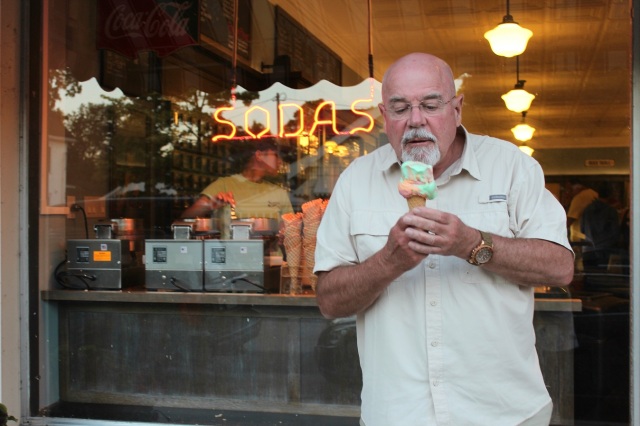 [Walking from downtown toward the lake.  Those are scarecrows.  Scared?] 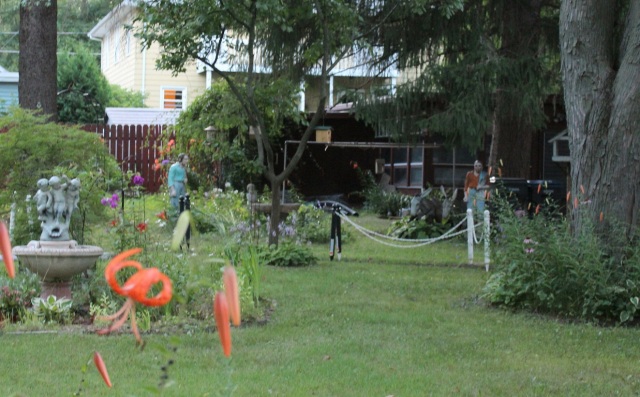 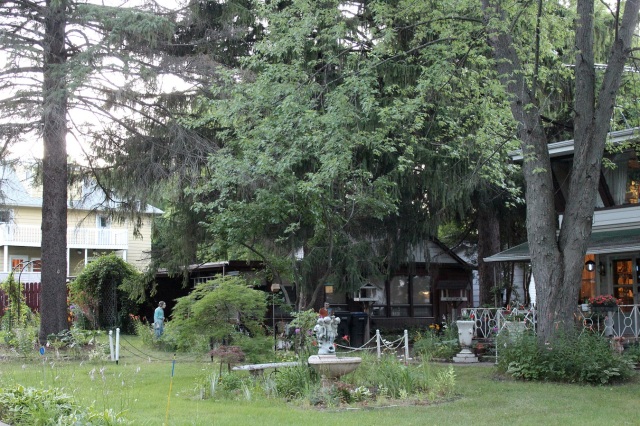 [Coming up on Victorian Village, a big resort.]

[The landscaping features hydrangeas along the sidewalk.] 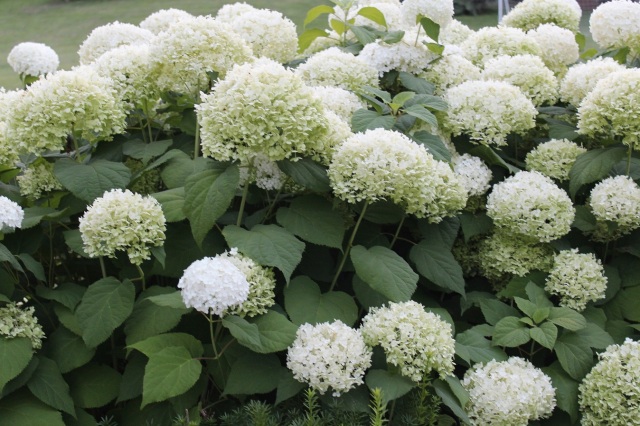 [And a nice view of the lake from the resort, over the pool and the Barefoot Tiki Bar.] 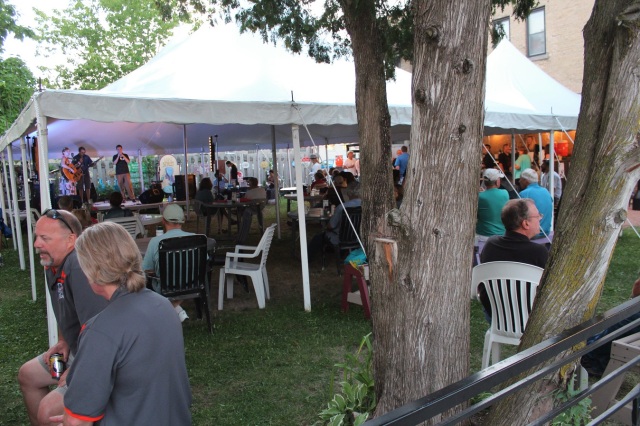 [Leaving the scene of the evening.]

[The old depot where several years ago I bought my “Tommy, the golfer.”] 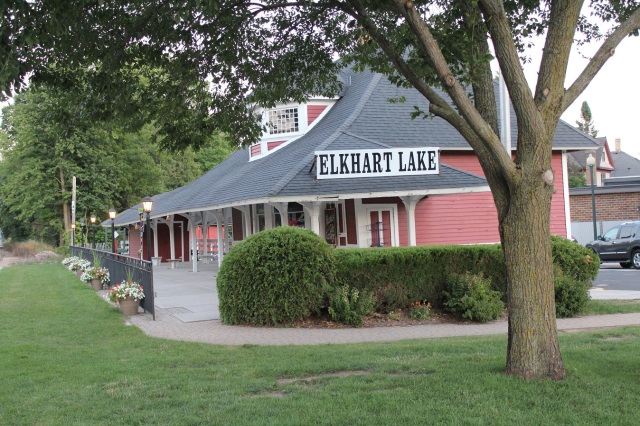 [With the aforementioned “Tommy, the golfer,” a sculpture made from a railroad tie.]

[Almost sunset, past our bedtime, and we still had that 12-mile drive back to New Holstein.] 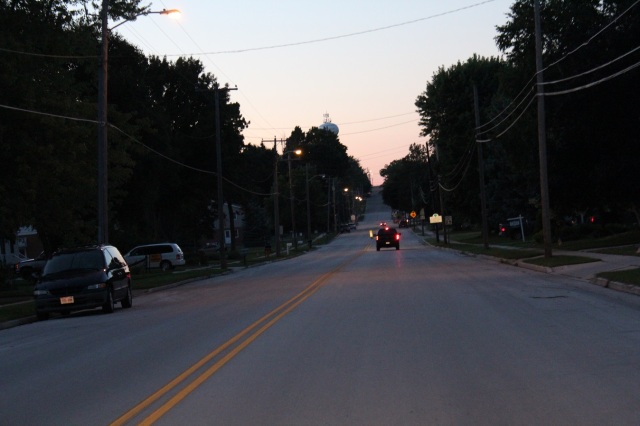 Ah, summer, what power you have to make us suffer and like it. ~ Russell Baker