Win, And Move On 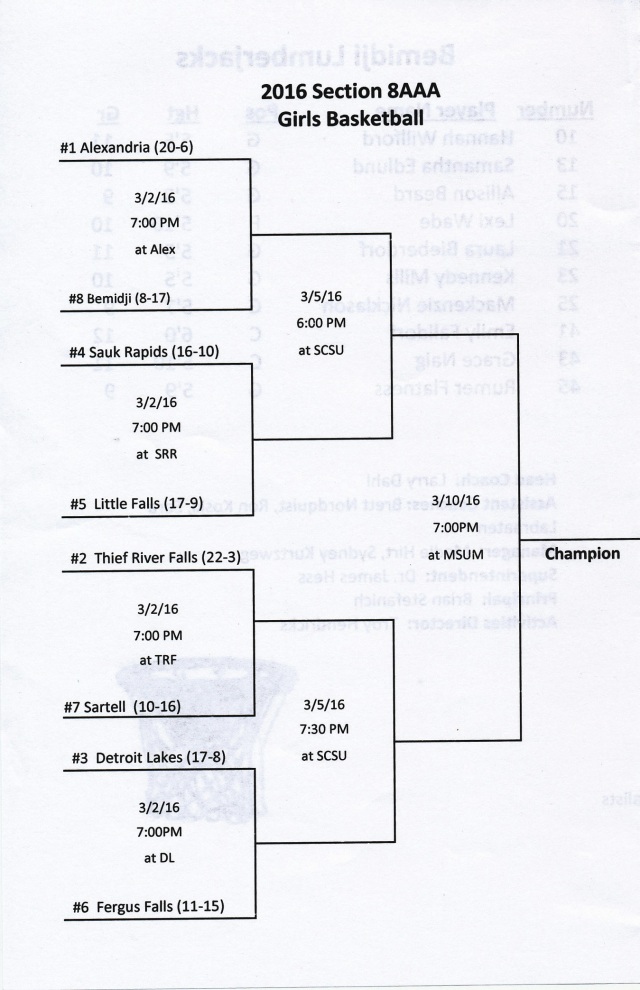 [Does anyone see it yet?] 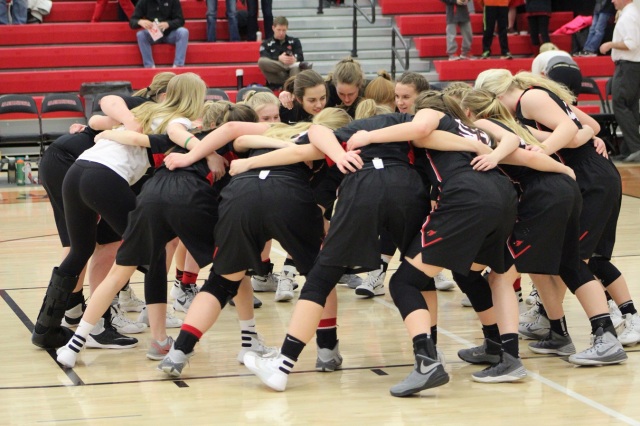 [We were hosting the Bemidji Lumberjacks in a first round game.  The Lumberjacks must be in a transition phase for as a school quite a bit bigger than Alex, their varsity team had a very short bench in terms of number of players.  Oh, and we beat them by over 30 at their place in our only previous meeting this year.] 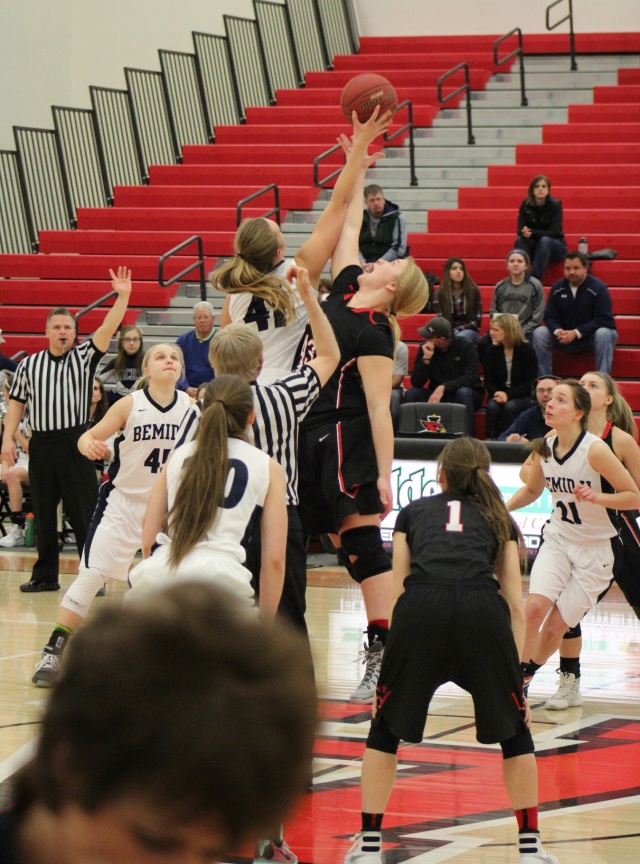 [The ref shadows Macy up the court.]

[Schmidty, at the point of the defense, gets a steal and goes in for a lay-up.] 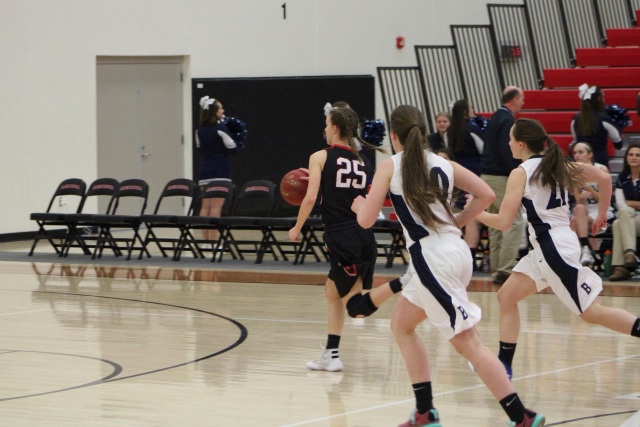 [And then hustles back on defense again.]

[Ooops, did someone get behind us?]

[The tone of the game . . . when the Lumberjacks inbounded, the Cards applied an immediate double team which often led to a turnover and an easy score.]

[Or a foul sending a Card to the free throw line . . . in this case Kendall.] 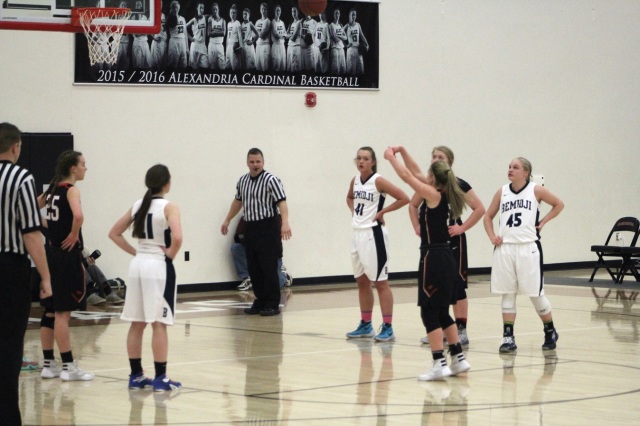 [At the half, a lot of points came late when our pressure was wearing them down.]

[Macy is a great free throw shooter.  But on this night, I think she missed a couple.  And she was 0 for 7 on 3’s, also very un-Macy like.  But it was team wide, as we were only 6 for 26 from the 3-point line.  I hope they come out of this shooting slump soon – maybe with the concentration required against stiffer competition.  The good thing was they kept taking them (you have to when you’re wide open) hoping to shoot themselves out of it.]

[We were a one section further south on this night – allowing this close-up of Macy.  When the students sit in front of us the center section, they stand during the game restricting the sight lines of already sight-line restricted old folks!  They were all dressed in plaid flannel shirts for this game because   . . . we were playing the Lumberjacks!] 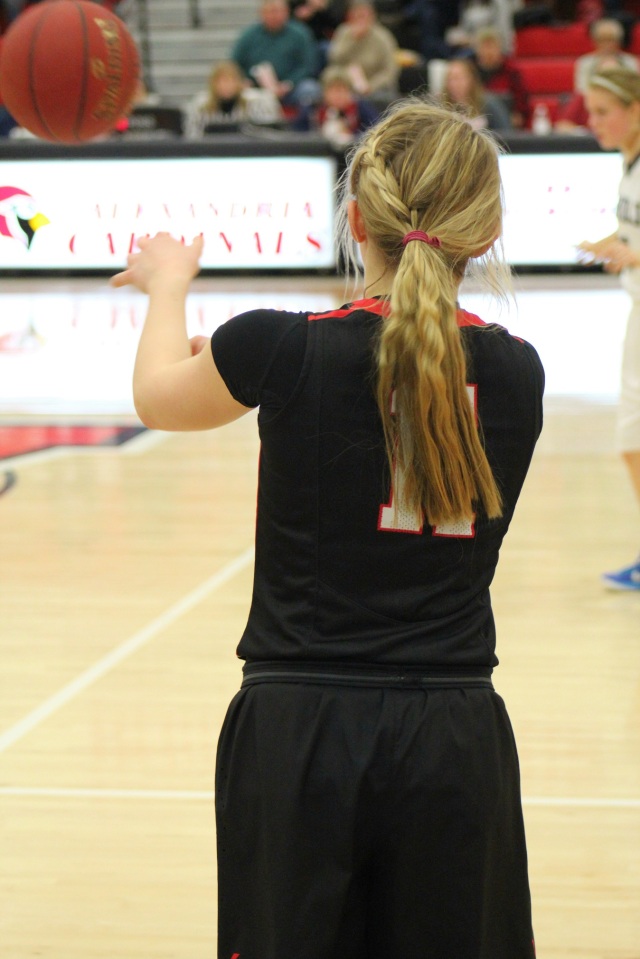 [Kendall hounding the dribbler, a 5’9″freshman  guard (45) with the fantastic name of Rumer Flatness who I believe put up 18 points with a shotput-like shot that seldom missed?] 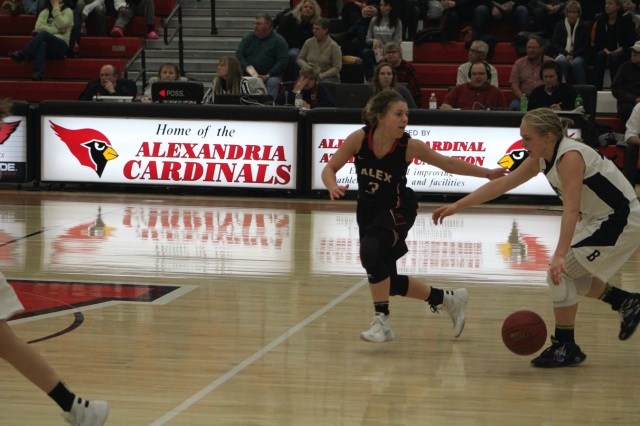 [Kelby Olson-Rodel (13) put on another fine display of her verticality (yeah, she gets good ground clearance.] 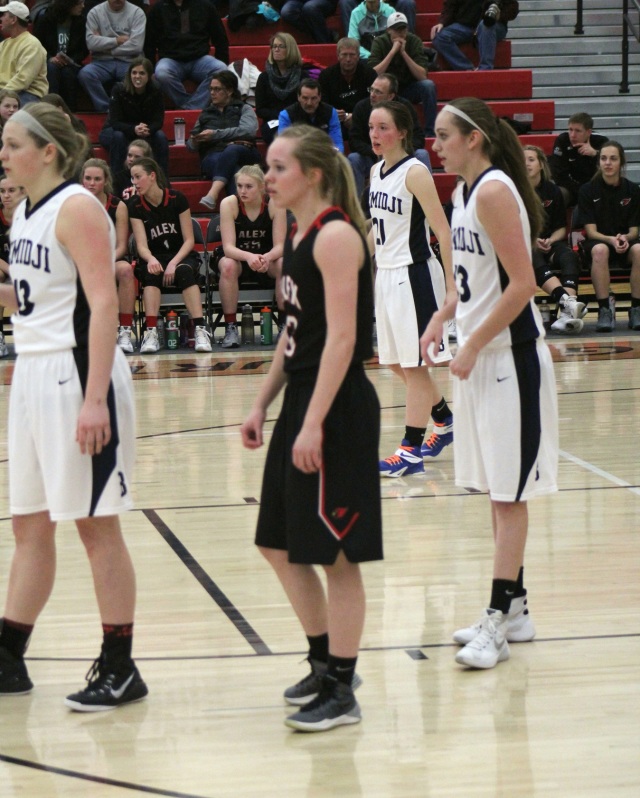 [And Kayla once again held down the fort in the middle.] 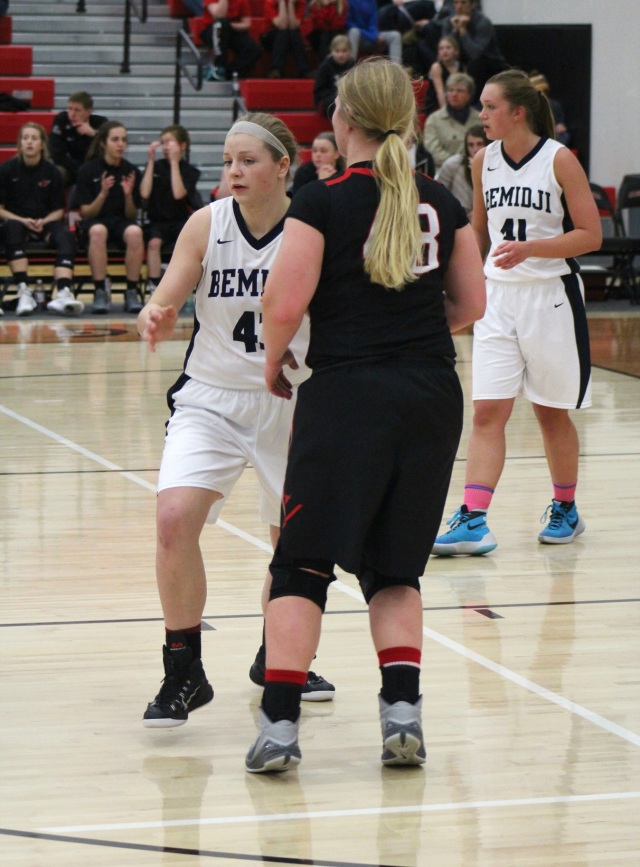 [Another stalwart defensive performance – the starters all left the game with more than half of the 2nd half left which allowed the Lumberjacks to close what was once around a 30-point gap.]

They shot the ball well early. What comes out of the microwave hot doesn’t always stay hot. I know, because I eat bagels in the morning.  ~ Shaquille O’Neal

Kudos to the boys’s basketball team, who on the next night played No. 1-seeded Fergus Falls for the section championship.  The Cards led by 10 with 3 minutes left in the game . . . but lost 63-60.  A confluence of bad omens struck us at the end.  Spencer Hocket is probably our best free throw shooter but missed two late in the game, Jaran Roste played little of the last 8 minutes because of foul trouble and did foul out, and the free throw numbers did not match up well – we were 4 of 7 for the game, the Otters a perfect 18 for 18. All credit to Fergus, who had a great year.  And our Cards really improved by the end of the year and could have won this game.

Up next:  Depends on wins?