[Well, there was no Day 3, and that’s the rub.  The Cardinals had almost a 2-day layover before this game, at 9:00 am.  Not an excuse, just an observation.  And because they were playing for the consolation title, again, it didn’t appear to attract their interest.  Before the game, the KXRA broadcast team of DMac and BCun were at their posts in Ridder Arena.] 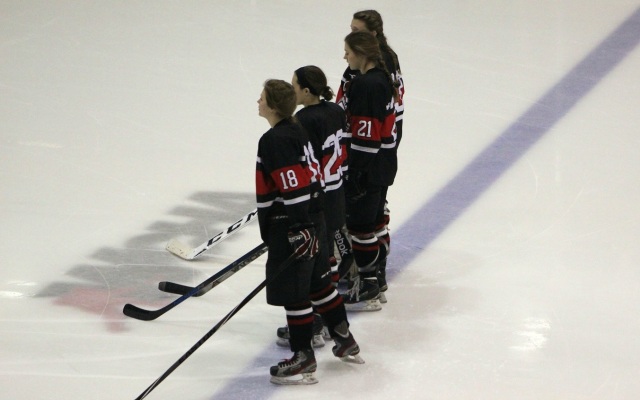 [We were playing New Prague.  The Trojans were the No. 5 seed, but it must have been a close call between them and us.  Similar records, would appear to be a good match-up.]

[But the Trojans have sophomore Catie Skaja (3).  Skaja is a member of the U.S. Women’s National U-18 team that won the world championship.  With 16 of the 22 members of that team from Minnesota, some wag noted that Minnesota had defeated the world!] 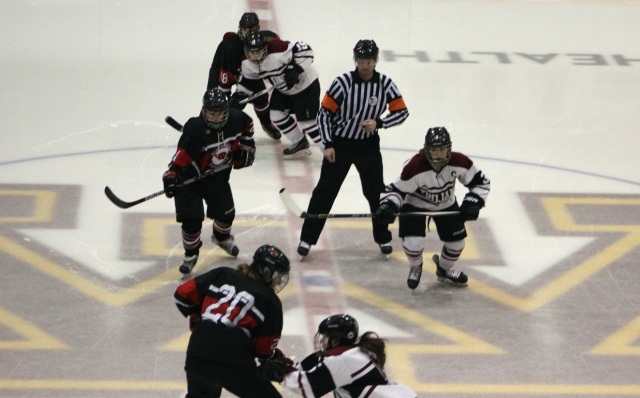 [Skaja is very good and very fast.  She scored on a 2-on-0 rush in the first minute of the game, and the Trojans scored again on anther odd man rush a minute later.  We were behind 2 – 0 and the game wasn’t 2 minutes old.  I believe we had only given up one odd man rush (that I can recall) in the first 2 games?  Obviously, we weren’t into this game.  The coaches called our only time out then to address the issue – but it was to no avail.  If you look closely (ha!), you’ll see we were down 3 – 0 after the 1st period.] 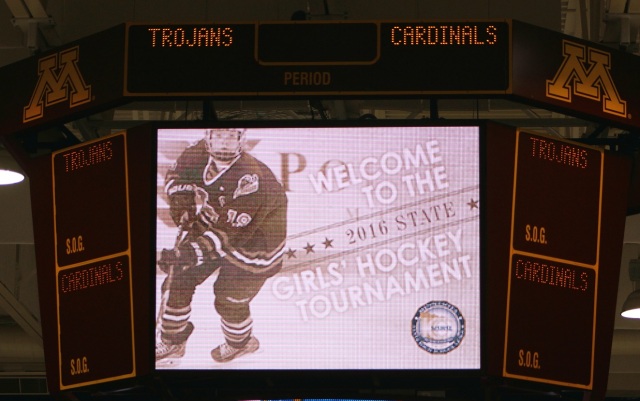 [The trend continued into the 2nd period – 2 more goals for the Trojans.]

[And into the 3rd where the Trojans got their final 2 goals for a 7 – 0 win.  I don’t recall the Cards ever having a good scoring opportunity.]

[If there was a highlight for the Cards, it was that everybody got to play.  And the entire team seemed genuinely excited about that.  Senior goalie Taylor Coker took over to play the 3rd period (I believe they made the goalie change on the fly?) – the 4th line played regular shifts.  But, of course, the seniors did not want to go out this way.]

[But it was another good season overall.  Thanks again to all our seniors.  We lose a lot of key players  – it will be interesting to see how we develop next year.]

[Hamming it up waiting for brother Cam to pick us up for lunch.  We had parked in the Dinkytown garage and wanted to leave the car there because we were coming back for the Gopher game in the afternoon.  It was the same day as the North Stars-Blackhawks alumni hockey game at the football stadium so it was going to be a high traffic area.]

[So brother Cam drove us through downtown on our way to Uptown, his favorite place to go to enjoy the good times in the big city.]

[Over the Hennepin Avenue bridge.] 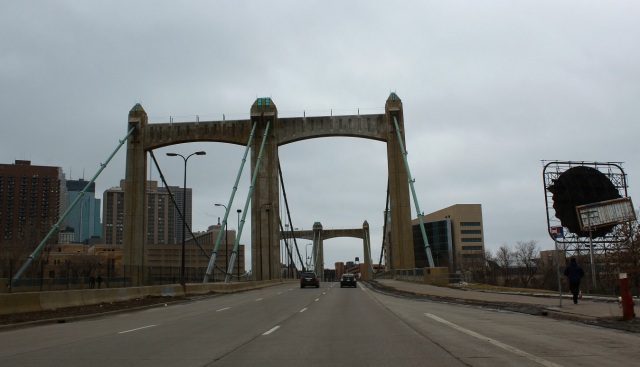 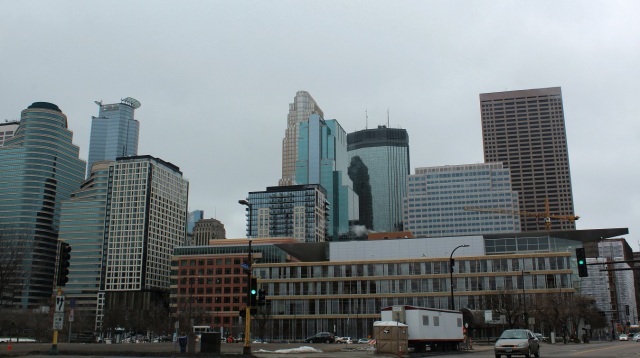 [Apparently a Minnesota singer and songwriter of some repute.] 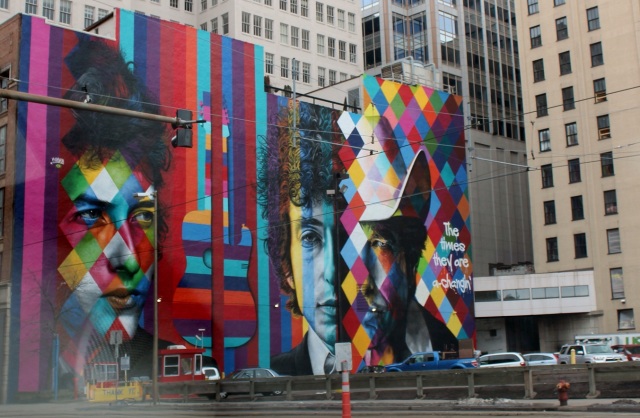 [I think the Orpheum has been here since before electricity.]

Meanwhile, back at Ridder Arena . . .

[The Gophers readied for game 2 against the dreaded Badgers.  Team captains Lee Stecklein (2) and Hannah Brandt (22) discuss Jess Lourey’s next book with the on-ice constabulary.] 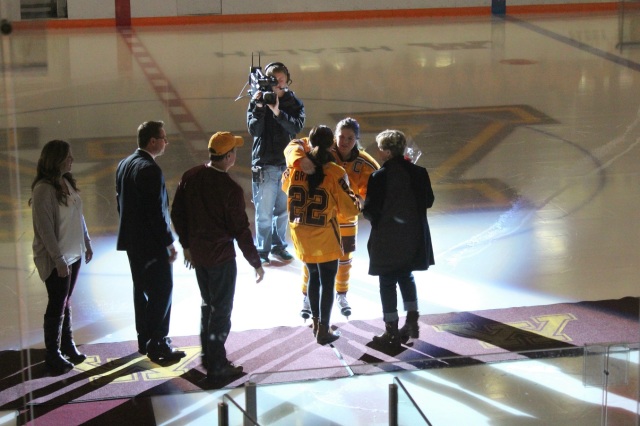 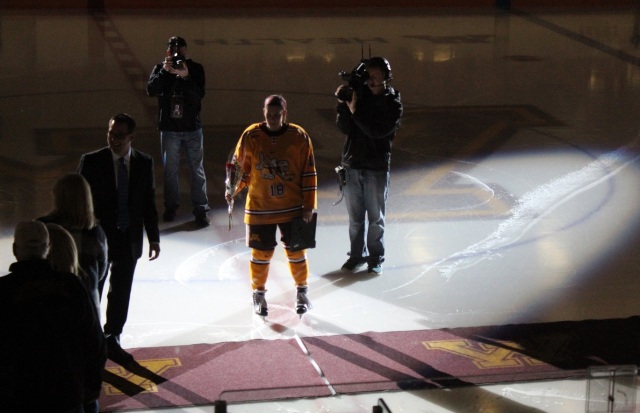 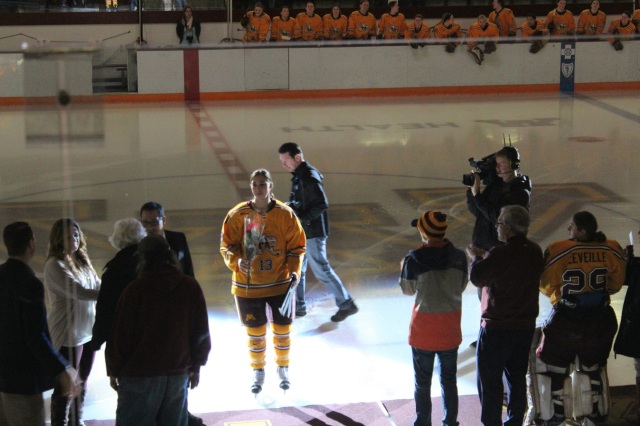 [Key players all, but the Gophers should be really good next year, again.]

[And the starters, I believe beginning with Megan Wolfe.] 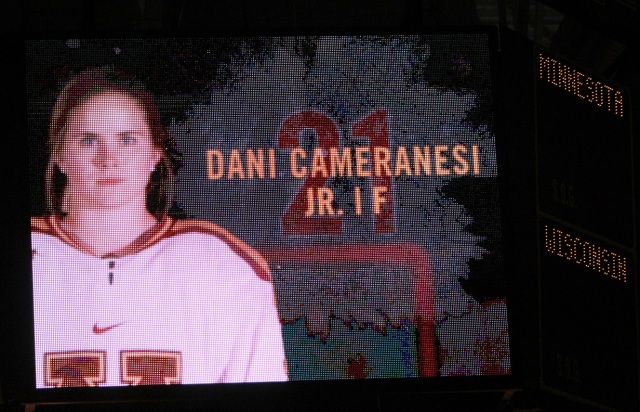 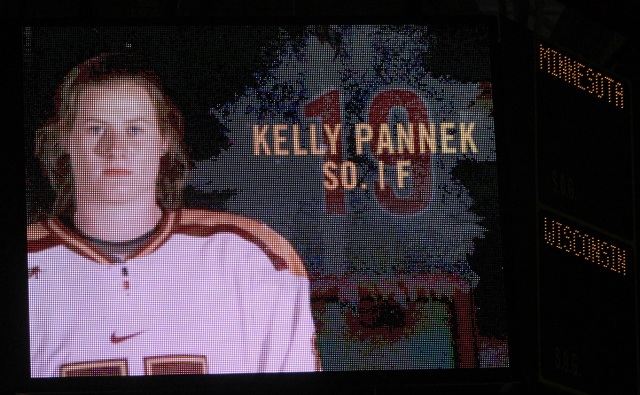 [And just like the previous day, the Gophers got an early jump with Sarah Potomak (26), freshman forward (and our other Canadian) scoring at the 3 1/2 minute mark.] 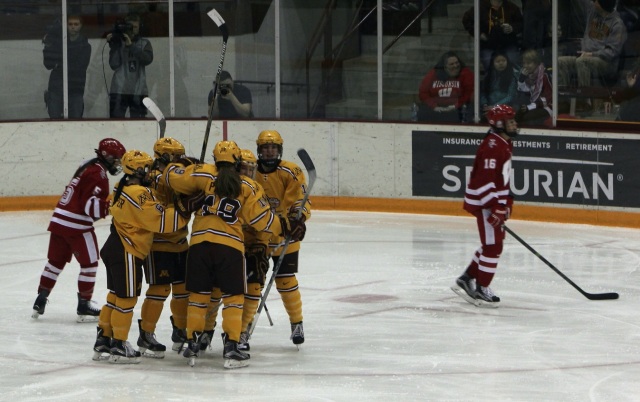 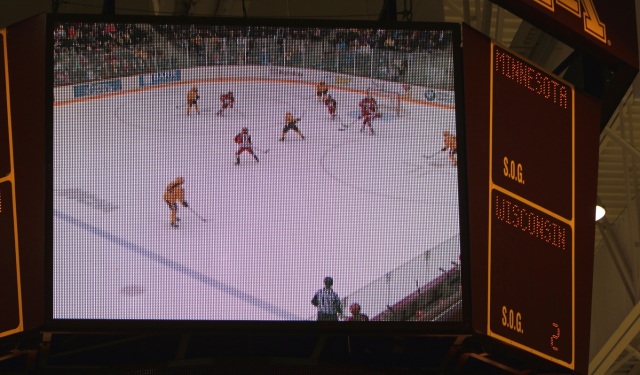 [And then Kate Schipper (6), junior forward, scored at the 5-minute to give us an early 2 – 0 lead, just like the previous game.  The Gophers appeared to be rolling.] 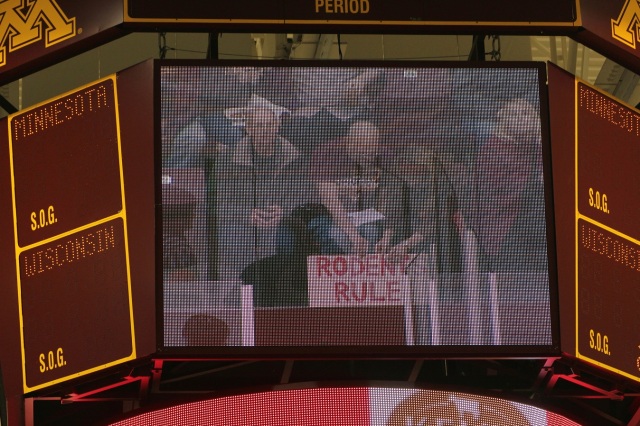 [A McMillen slap shot . . . will knock the fillings out of your wisdom teeth.] 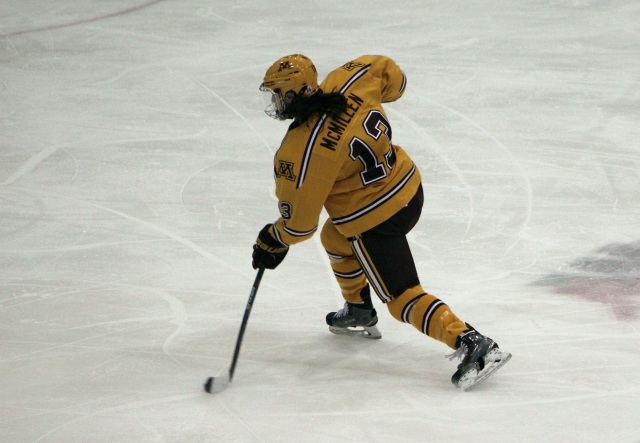 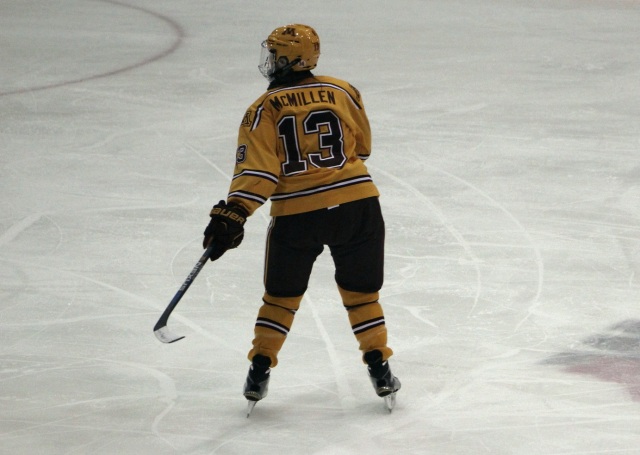 [Kessel sights an open net, but it appears to be an unruly puck.] 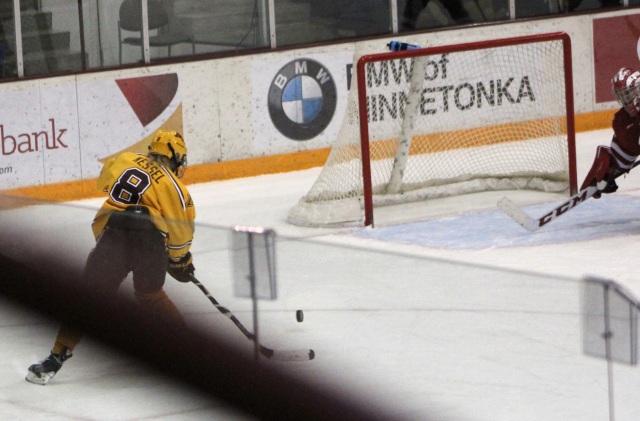 [The Badgers weren’t going to be had so easy today.  They got a goal later in the period to make the score 2 – 1 after one.] 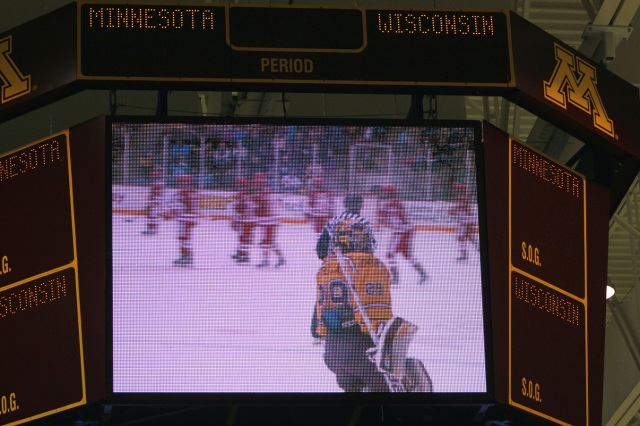 [Another SRO crowd . . . can you spot the Supervisor trying to “cash in” some candy coupons?] 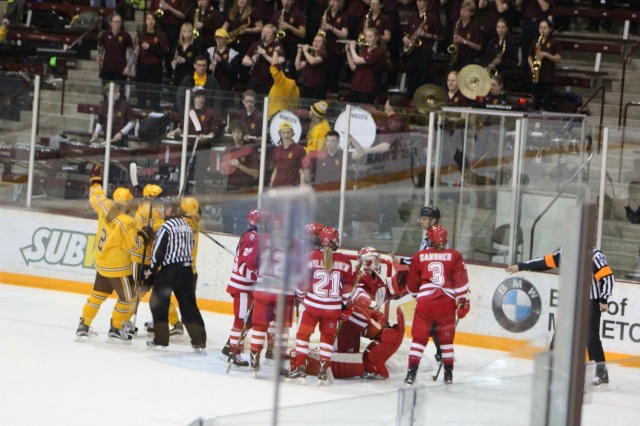 [But a Badger goal a couple minutes later made the score 3 -2 after 2 periods.]

[The only score in the 3rd period was on a penalty shot by the Badgers.  A Gopher defender threw the puck out of the crease which is a penalty shot penalty.  It was a good move as the Badgers probably would have scored otherwise.  Wisconsin star Annie Pankowski made a great move to score on the shot.  So, it was on to overtime.  There is little to choose between these teams – the Gophers are probably a tad quicker, the Badgers a little stronger, the Gophers maybe more dynamic, but the Badgers are really solid.  I think their strength was wearing us down in this game, and they may have had the advantage going into overtime.  But the Gophers found that extra gear, and at 4 minutes in Ms Pannek got the winning goal for the Gophers.  Go Gohers!  Two days of great hockey!] 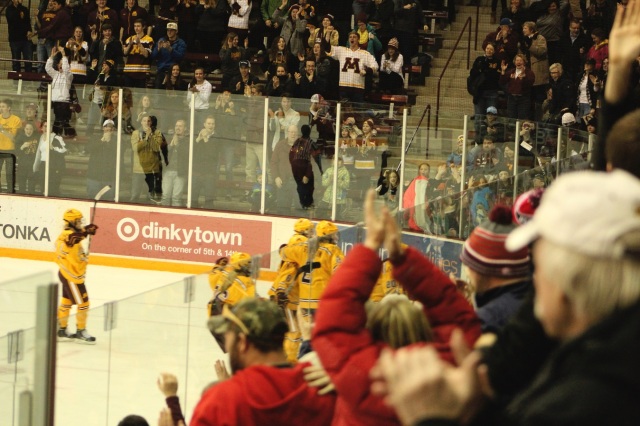