Missed the Biggest Game of the Season, Sorry . . .

No, This Wasn’t It

[Our Cardinal basketball coaches, Julie Wrobel and Wendy Kohler, were caught at the championship game for the Minnesota Lynx. Ostensibly, they were there to learn how to celebrate when our team makes state this year – their daughters, Macy and Kendall, respectively, are the starting guards. There was also a rumor they were there to recruit, but I’m sure they are aware Maya Moore’s high school eligibility has lapsed?] 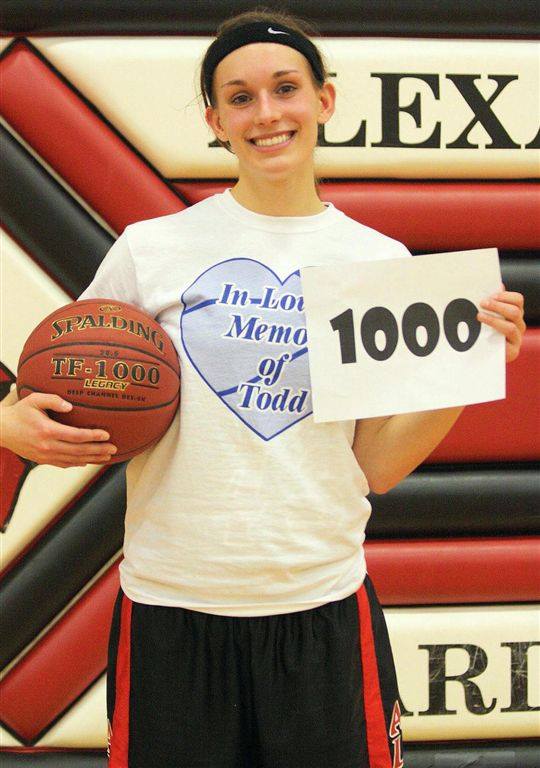 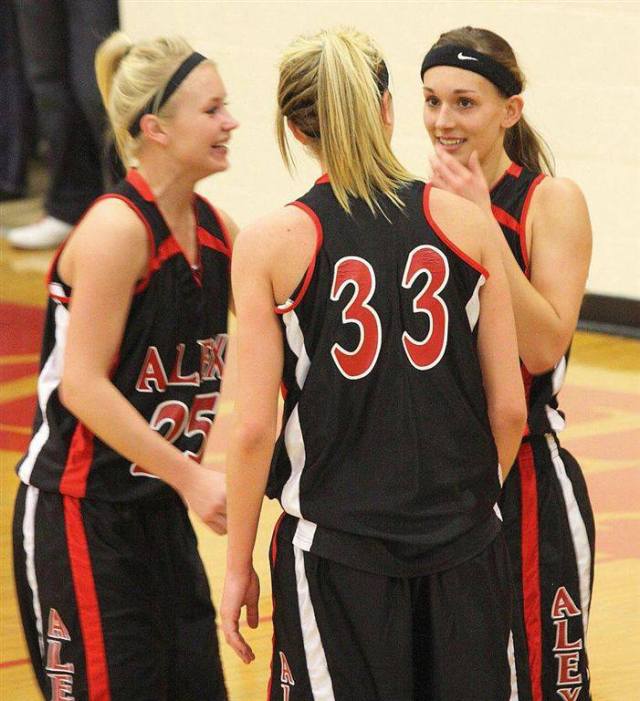 [Facebooked:  Just a little note to say a longtime record was smashed yesterday, a bit to my chagrin. In January my blog will be entering its 6th year of existence, with some 725 postings to date. The idea was a “what’s happening for fun in Alex” kind of thing for friends and family. Because I like photography, and observing and commenting on the human condition – yes, a Peeping Tom. Early on, however, the Echo Press asked if I wanted it to be part of their on-line service. I was flattered, of course, and appreciative, but said no – to do so the Echo would properly require some degree of control and I didn’t want it to get out of hand. So in its first 5 years, the most hits in one day was 251 on January 29, 2012, the day after Lauren Trumm (yes, the daughter of Greg, the current chair of the Education Foundation) scored her 1,000th career point. It has never really approached that number since. Then we had our 50th class reunion homecoming weekend – 5 postings later, suddenly yesterday there were 495 hits! Oy, now I’m thinking agents, editors, attorneys, and accountants! Settle down, people! But many thanks, too – it’s just that always kinda liked ‘LT’ at the top of the list!]

As it turned out, three days of participating in and covering the reunion with a 50-pound camera around my neck led to . . . being put on the injured reserve list.  I developed what can best be described as sciatica of the neck.  I began chiropractic adjustments as soon as I could, and progress is being made.  I have to have my vertebrae realigned, but until that process is completed I’ve been a complete pain in the neck (some would say it’s another part of the anatomy).  Yesterday, after my most recent “getting cracked” session, I mentioned that the pain has been debilitating – in the last two weeks I’ve had to miss meetings (well, that may be a plus), any physical labor (that is a plus), but also missed three senior college classes (thus forfeiting any chance I had for getting an honorary doctorate).  My chiropractor suggested seeing a doctor doctor and get some pain meds.  I did, and oh what a relief it is!  I figure if it’s good enough to tranquilize a hippo, it’s good enough for me.  But last Monday, I did miss . . .

We hosted the Rocori Spartans in volleyball last Monday.  You may recall last weekend we hosted the . . .

If we had beaten Grand Rapids in our group final, as we should have, we would have played Rocori for the tournament championship.  Rocori has won something like 22 straight conference games, have lost only one game all season, and are ranked No. 1 in the state in class 2A.  They beat us easily in 3-straight at their place earlier this season (allegedly our worst game of the season), and have a front line of all 7-footers!  But our 5’9″ hitters apparently figured something out this time and took the mighty Spartans to a 5th and final game before losing.  Figures to bode well for us as we head into section play. Here’s a game report from fellow Super Fan Bud Anderson:  Too bad you missed this one, the volleyball girls played awesome!! But the stress of the games probably would have made your neck a lot worse!!  A 5-setter, sitting in the bleachers with no neck support – they would have had to carry me out on a stretcher!

But now under the influence of heavy pharmaceuticals, last night we were able to attend . . . 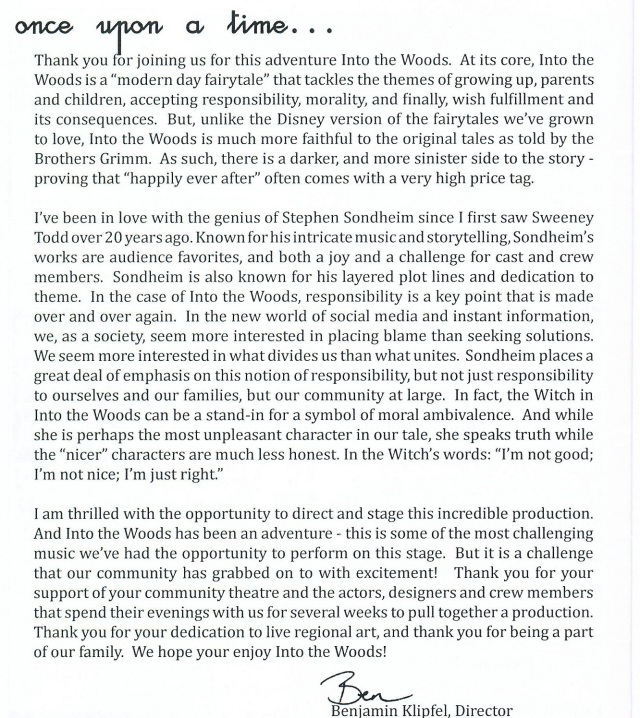 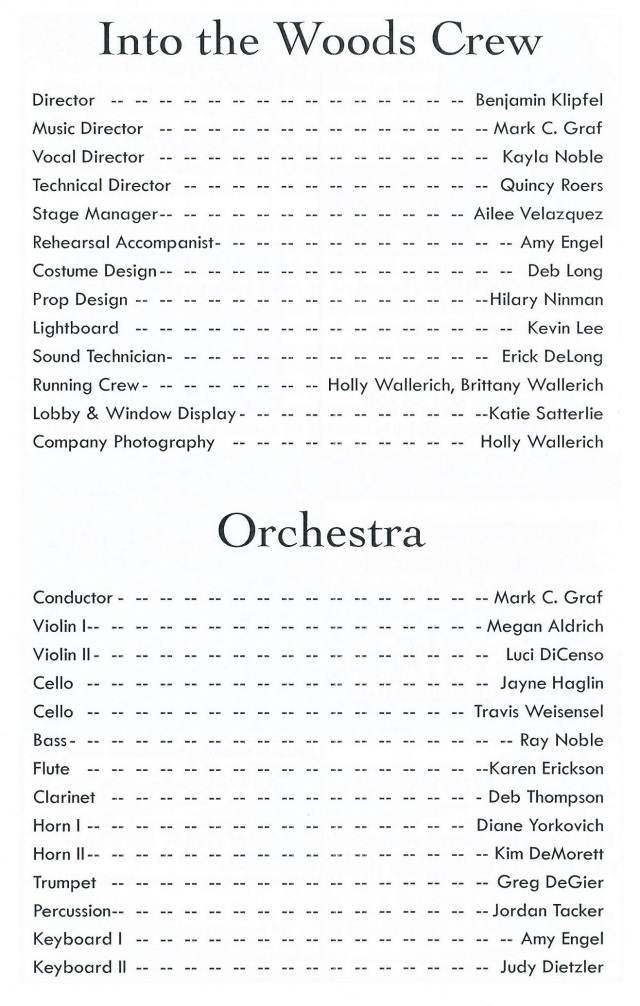 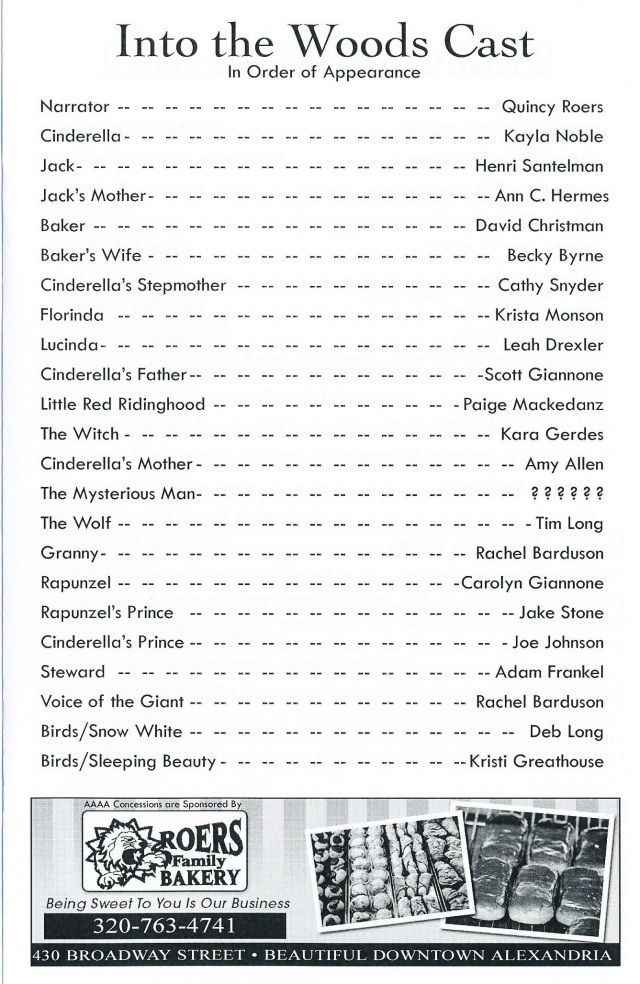 [And fine dining at SAWA before the play, we by sheer circumstance were able to join the Boy Tenor with Jeanne and a friend.]

[All photos courtesy of the Super with her tablet.  Here Ben Klipfer, the guy in charge of the theatre, addresses the audience reminding all to turn off their cell phones.  If a phone rings during performance, the offender will be assigned 40 hours of hardship duty on a Kim Kardashian watch.] 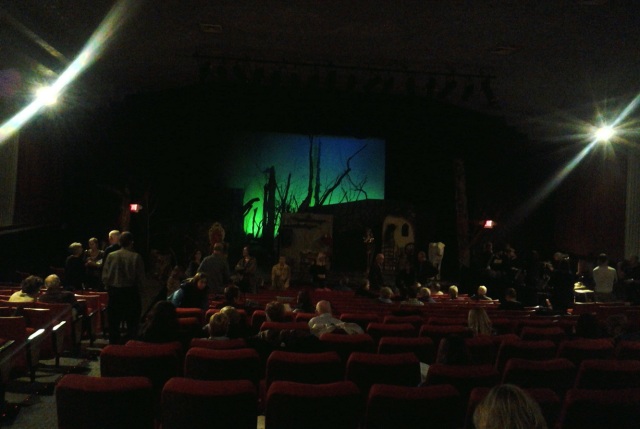 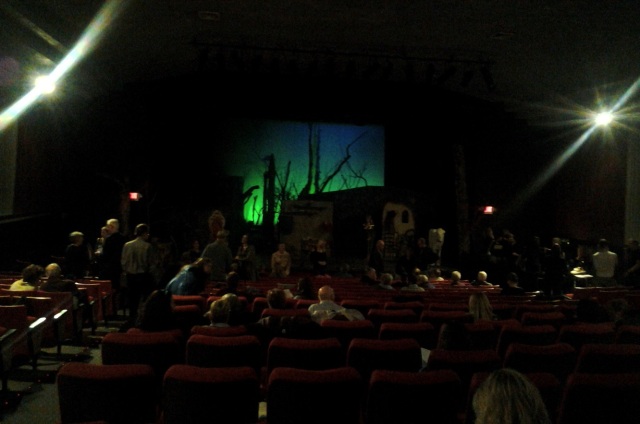 [For reasons inexplicable to me, this harp was my favorite prop?] 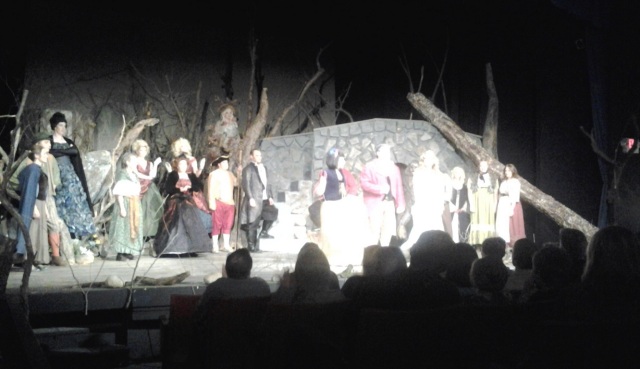 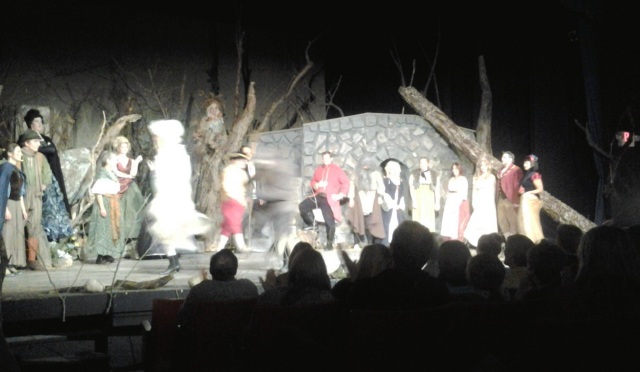 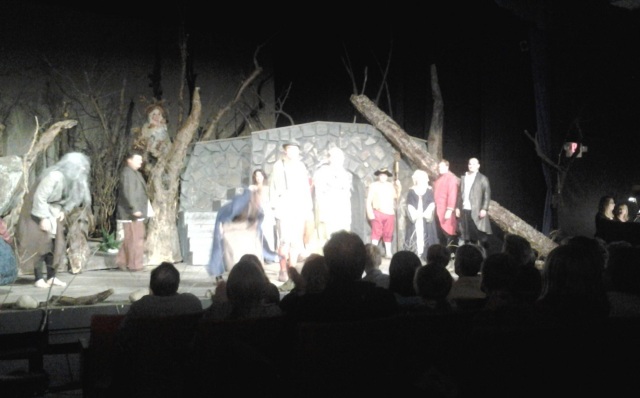 [The play runs through next weekend.  Check it out!] 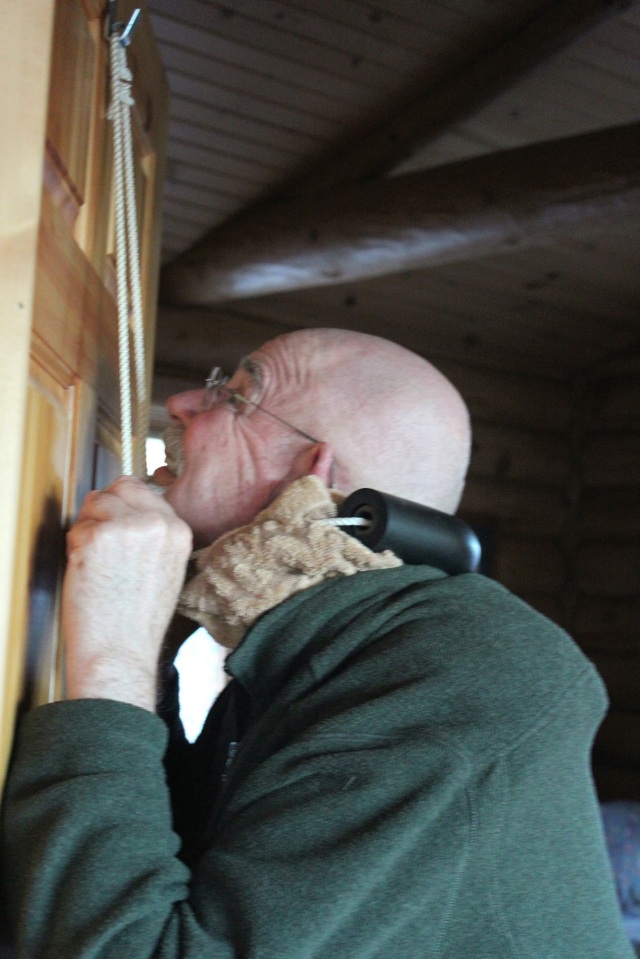 [I have every intent on being back on full-time duty soon.  Until then, I will wear an ice bag on my neck and shoulder and do those three little words that make me walk on air . . . Go hang yourself!]

Up next:  Section football.

1 Response to Missed the Biggest Game of the Season, Sorry . . .