[On Saturday, Alexandria hosted a 24-team field for the 43rd Annual Lions Meet of Champions (Cross Country) at Arrowwood and an 8-team field for the 21st Annual Runestone Classic Volleyball Invitational at the high school.  With near record high temperatures and a zillion kids and their families in town, the local Dairy Queens decided to go public on the New York City Stock Exchange with IPO’s of about a thousand dollars per share.]

[What a difference a year makes!  This is “Weakie” and me at the same meet last year, same beautiful sunny sky, but we figured the wind chill was around 20!] 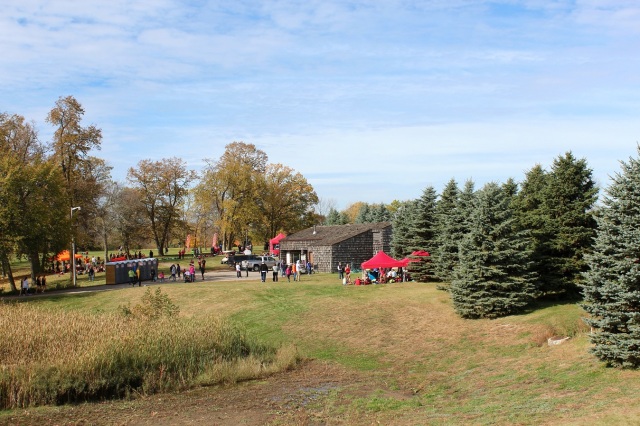 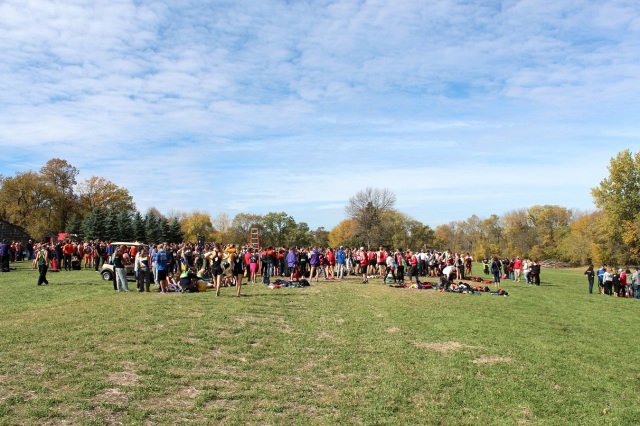 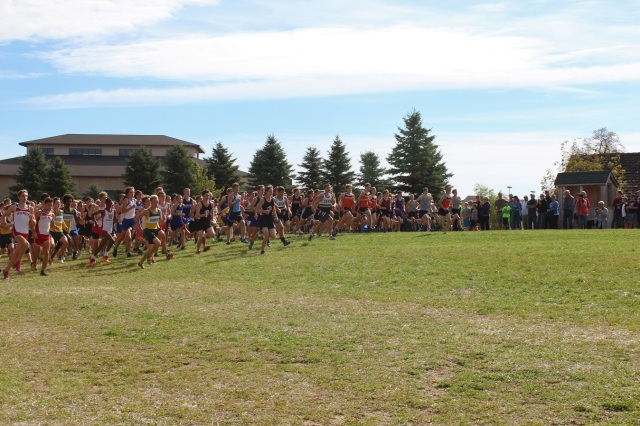 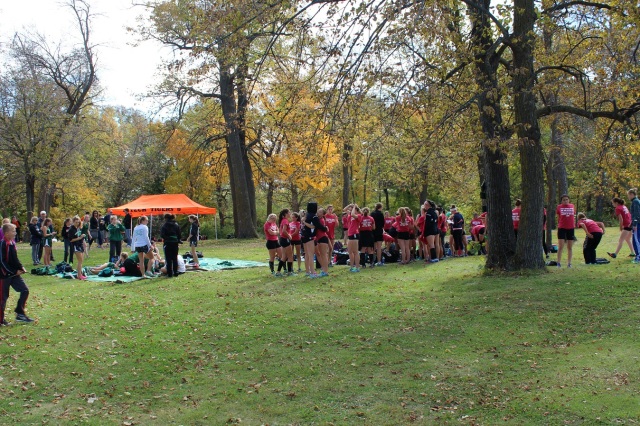 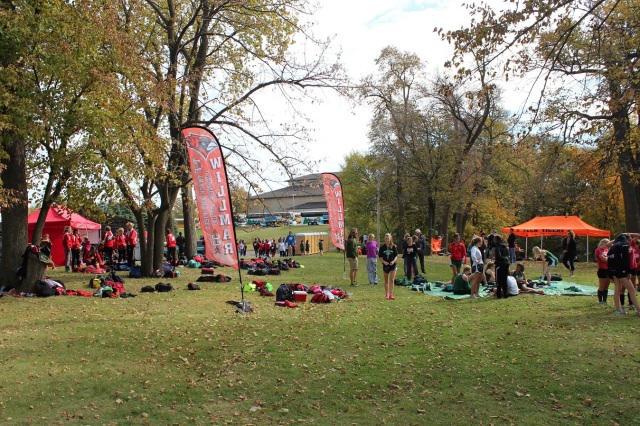 [So, how do you cover both?  I went to the high school first as volleyball was scheduled to begin at 9:00 am.  The Cards weren’t playing.  Apparently because the team had just played at Fergus Falls the night before (a win), we were given an extra hour to sleep in (makes sense) and played Wadena-Deer Creek (state champs in their class in recent years) at 10:00.  I sat through the Big Lake – Grand Rapids game, then watched the Cards dispatch the Wolverines, and then departed for Arrowwood (a 7-mile drive, but fortunately the Alex Saturday morning rush hour was light).  I arrived to the color and pageantry that is a multi-field cross country meet.  At first it’s fun just to wander amidst all the teams and their tents.  The boys JV race was about to begin – I believe the course was reconfigured this year because for the first time in Minnesota both the boys and girls are running a 5k distance (previously the girls ran a 4k).] 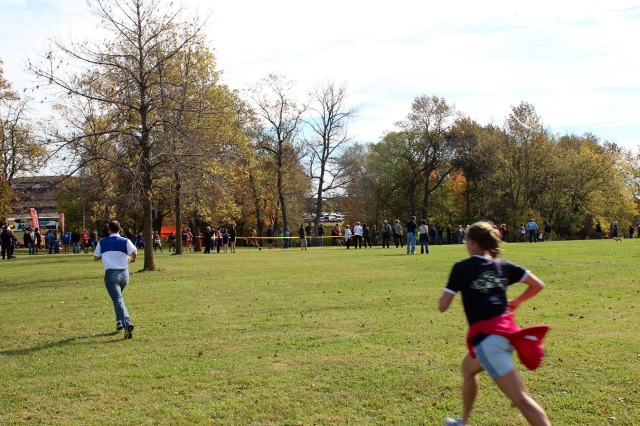 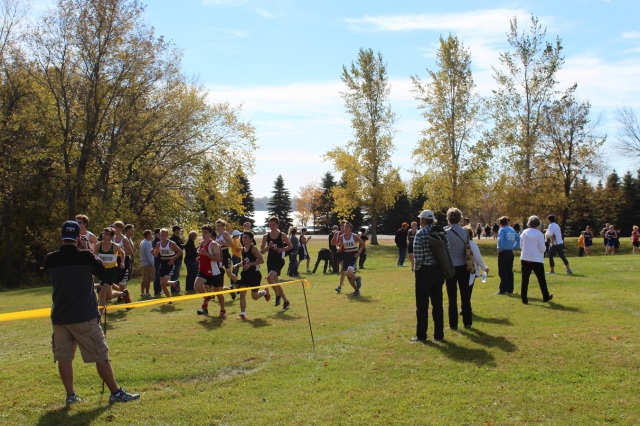 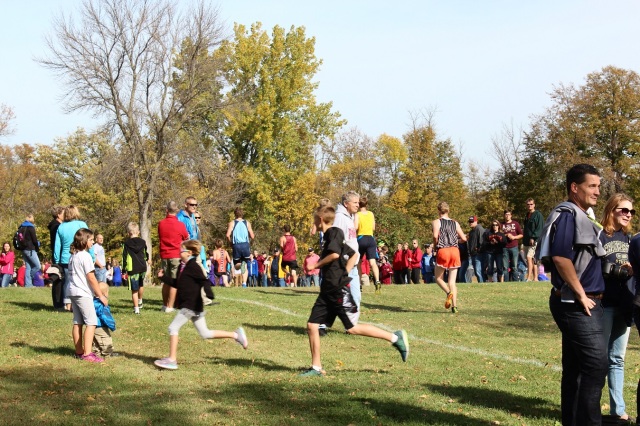 [We (the fans) then dashed (well, I ambled) to the next viewing spot where I tried to catch some Cardinal runners.  I noticed that Stillwater, which is THE designated state school for boys cross country, must have had 50 runners in this race, with about 20 of them in the lead of the entire field?] 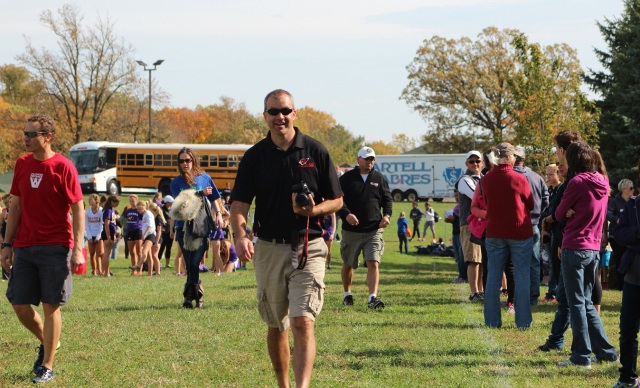 [But admittedly I was there for the girls varsity meet, the last home meet for the senior Hasz sisters.  Bethany and Megan are in the top 10 in the country in this event, so it’s been a real treat following them since they were 8th-graders.  Only Bethany would be running as Megan is recovering from injury but should be ready for sections and state.  Oh, and here comes Dad Hasz now.]

[The team huddles with head coach Travis Hochhalter for last minute instructions – something to the effect of run as fast as you can for as long as you can!] 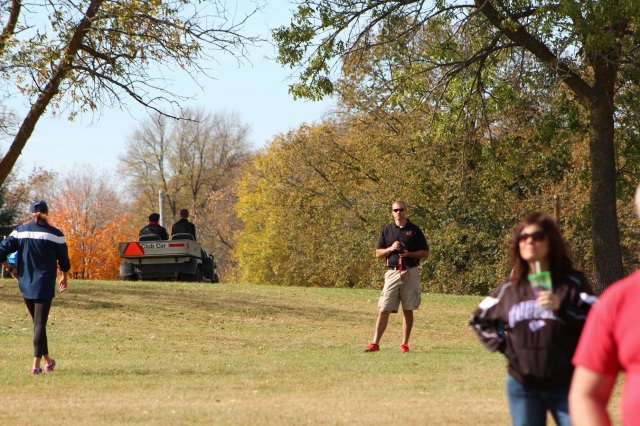 [As the race is about to begin, Doug finds a viewing spot further up the course . . . ] 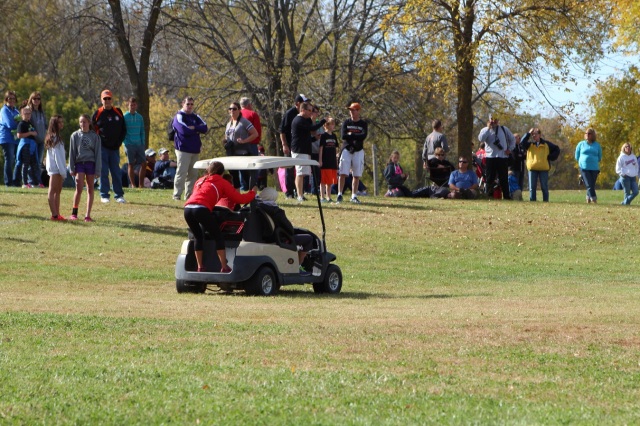 [While Megan hops a ride on a golf cart.]

[As the teams gather at the starting line – the field included the 2nd and 3rd ranked teams in the state, Marshall and Willmar, respectively, and three others (with the Hasz twins) in the top 12 individually.] 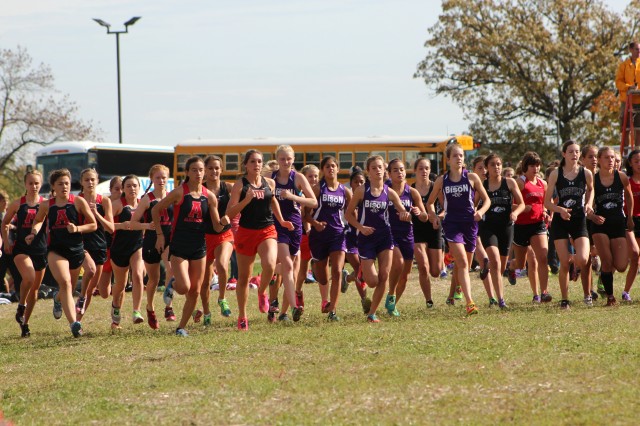 [At the start, Bethany follows the twin’s pattern of moving to the front of the pack immediately.] 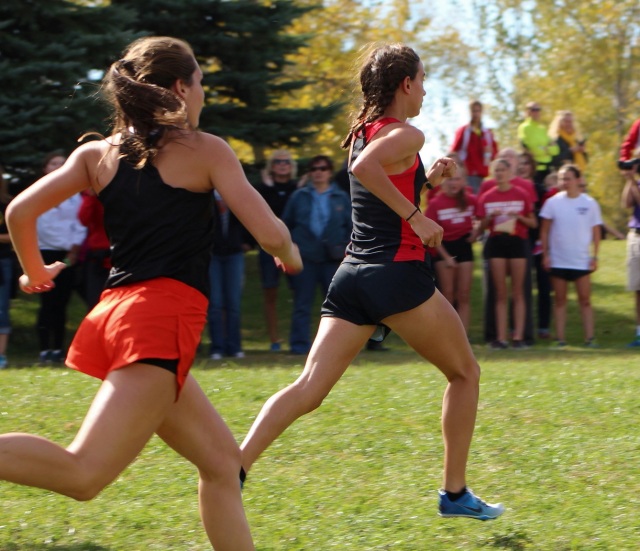 [And will soon start distancing herself from the field.] 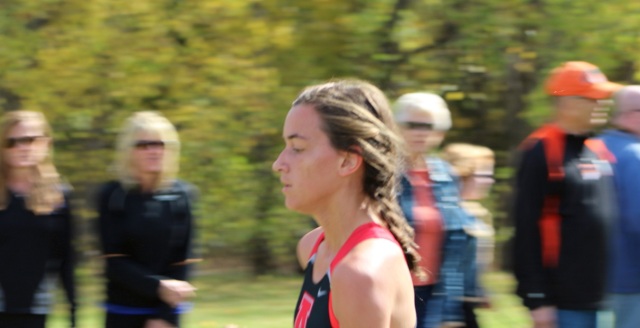 [At the next viewing point, she has separated herself from the field.  When the boys JV ran past this spot, I thought they all looked like they were in total agony and wondered why would they do that to themselves.  Bethany and Megan always look like they’re just out for a walk in the park?] 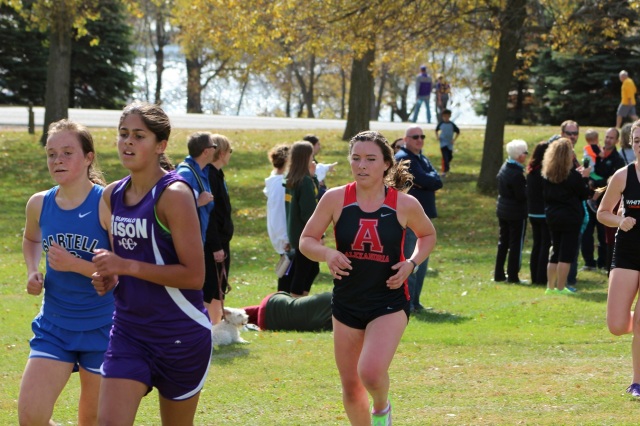 [I then tried to get all the Cardinals – hope I did?]

[Though noted in other sports, apparently c-c fans.] 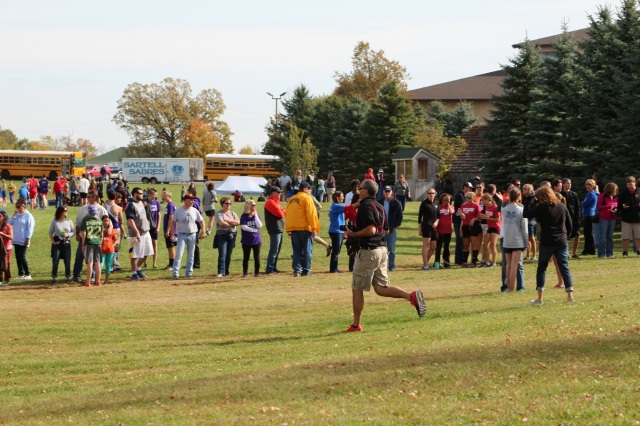 [Showing the stride passed on to his daughters, Dad sprints to the next photo op.] 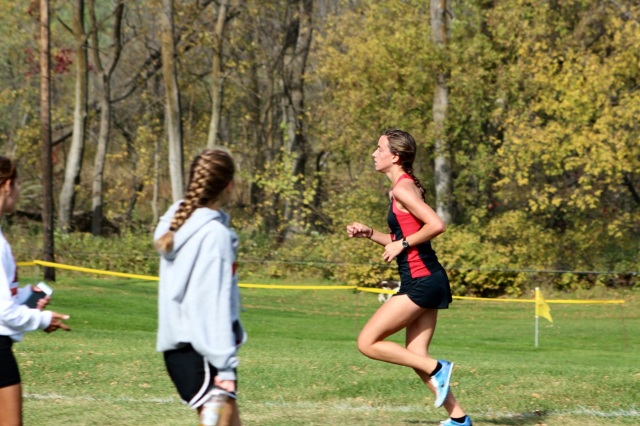 [At this point Bethany was about 80 yards ahead of her closest pursuer.] 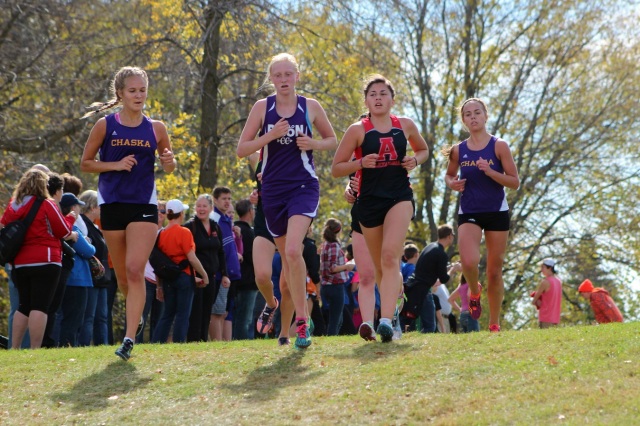 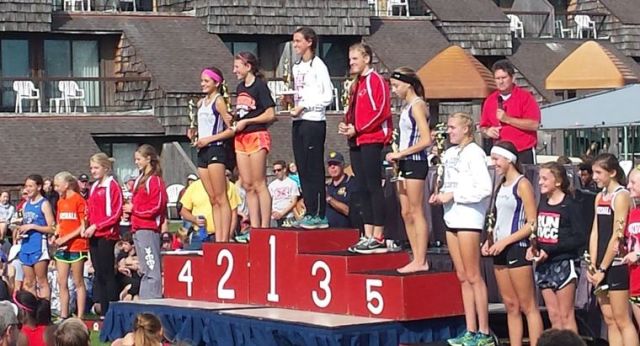 [Bethany on the victory stand!  (Photo stolen from a Voice of Alexandria FB posting.)]

[Then it was back to the high school, with a stop for gas again, to see how the volleyballers were doing.  We beat Big Lake while I was gone, setting up the final game in our pool against also undefeated so far, Grand Rapids.  Maddi Moore (6) leads us off with the first serve.]

[From the left are Gracie Schroeder (1) and Kayla Feldhake (16), with Natalie and Abby at the net.] 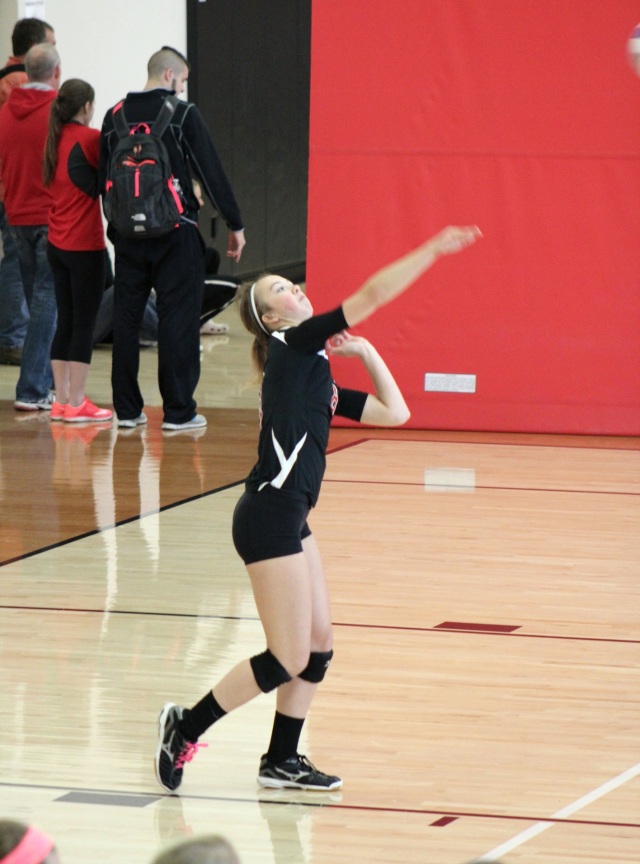 [Alexis again, she must have been on a service run!  We did get out of the box fast in the first set.] 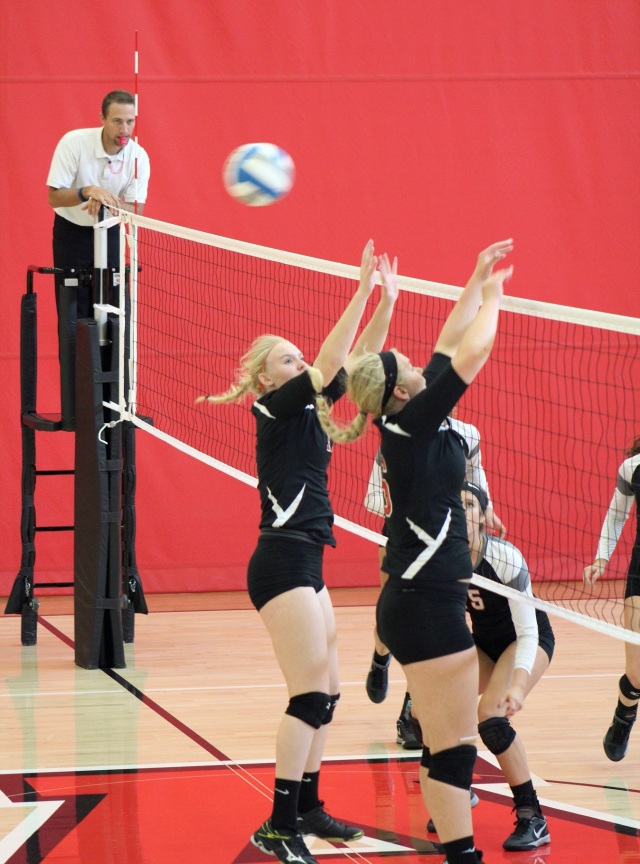 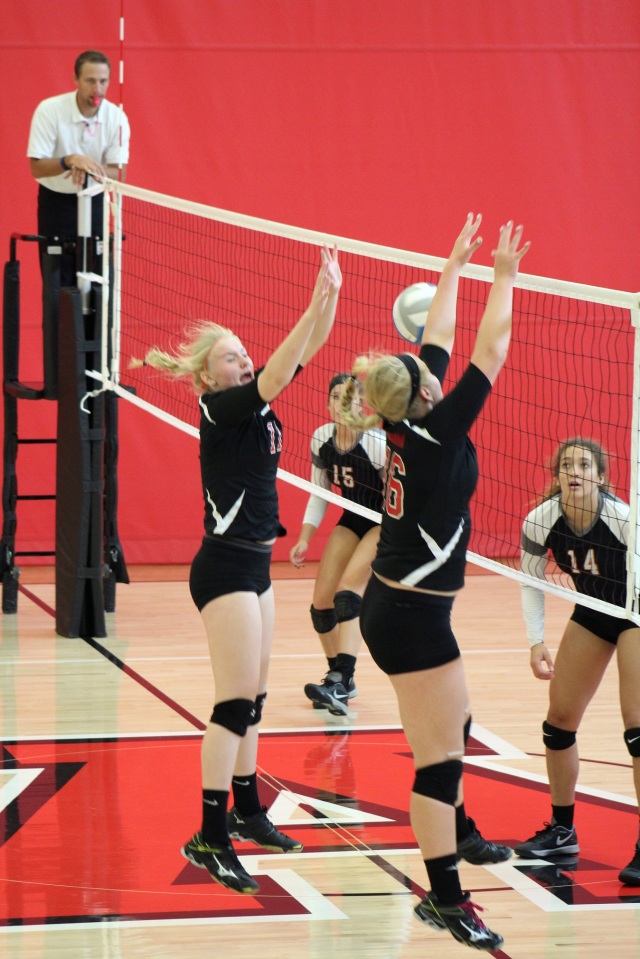 [McKenzie Duwenhoegger (11) and Kayla go up for attempted blocks.  I think McKenzie’s expression in the bottom photo properly reflects a “I hope this doesn’t hurt!”]

[Kenna Goracke (2) serves.  I hope she’s not embarrassed that I report she brought a little comic relief for the team later in the match.  She is a terrific backline player but as she was backpedaling to return a serve, she stumbled and went head over teakettle.  I was hoping she and her teammates would recover from their laughter in time to return the next serve.  🙂  ]

[The net players size each other up, then McKenzie and Alexis attempt a block.] 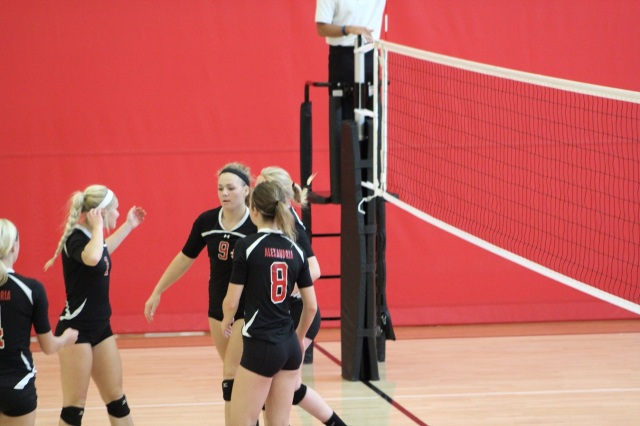 [Is this a point celebration?]

[After a block by Abby and Natalie, there is most certainly a point celebration!] 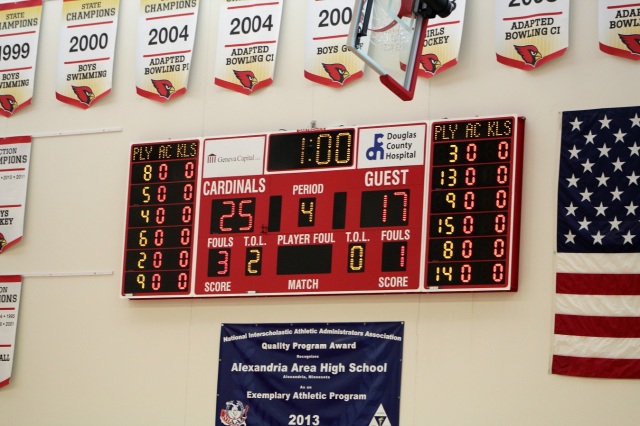 [Set 1, and not as close as the score would indicate.  The Card power game was clicking on all cylinders, and in particular Abby and Alexis were smacking unreturnable kill shots.] 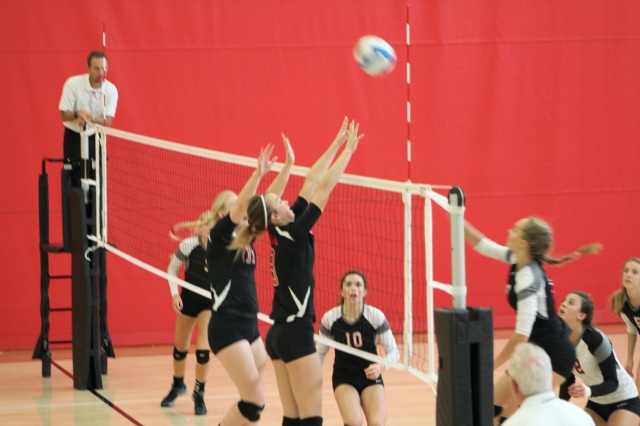 [McKenzie and Alexis again with an attempted block.]

[Alexis with a one-point landing, undoubtedly after another putaway kill.] 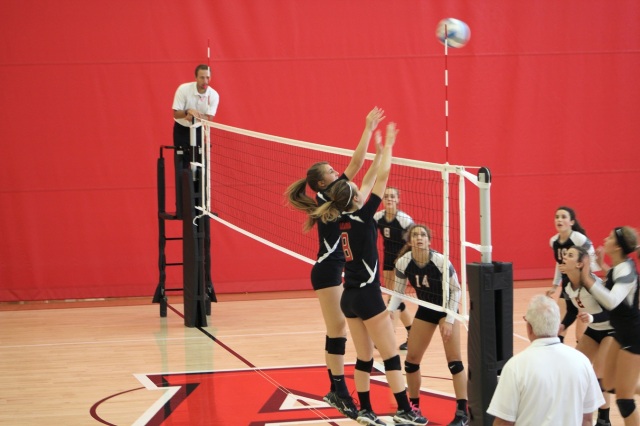 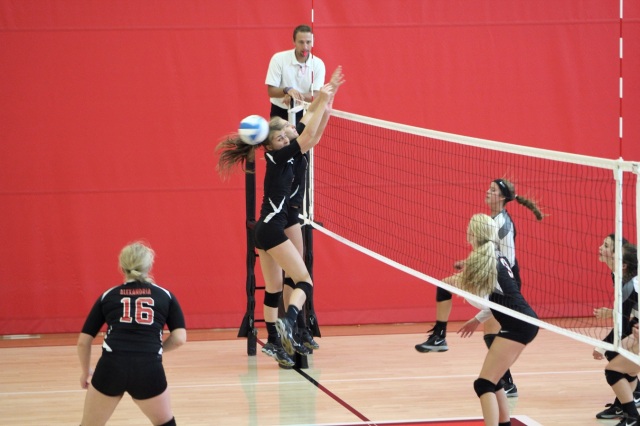 [Abby goes for a kill, top, and a block, bottom.  I thought the Cards went away from our power game after set 1 and lost our momentum.  We may have been getting tired, it was the 4th match in less then 24 hours, as we went more and more to unsuccessful dink shots and away from power kills.  I think I would have said keep feeding Abby and Alexis until Rapids stopped them or their arms fell off.  Sets 2 & 3 went “extra innings” and we lost both.  We did come back to win the 3rd place game.  Grand Rapids lost to Rocori in the championship game – Rocori is our conference leader, we’re in 2nd on the season.] 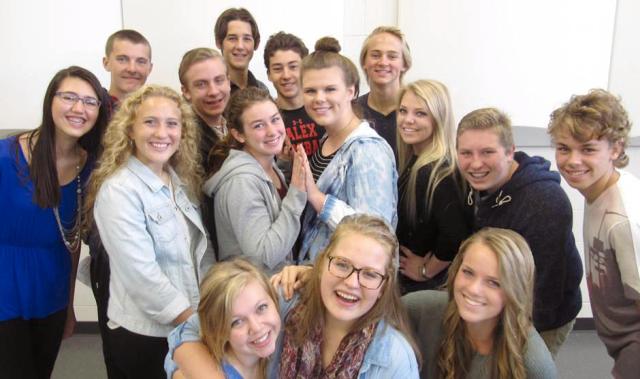 [The high school carolers, the Cardinals, and I are ready for the winter sports seasons to begin!]