We arrived at camp Sunday afternoon in a heat index of 100 degrees.  By dinner time, you could feel it coming.  Before we had slathered butter on our second roll, people were rushing to close doors and windows in the mess hall.  It came up so fast, bass boats caught in the lake were struggling to make shore with thousand horse motors.  It blew heavy rain sideways, with we heard 70-plus mph winds, and before dinner was over the power was out – for 3 hours.  The evening’s opening ceremonies and camp fire were postponed.  The storm did usher in a week of beautiful, if windy, weather, which was great for those of us who love jacket weather. 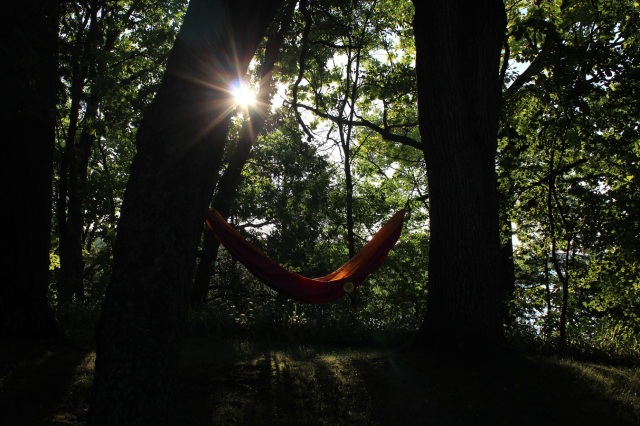 [Awoke to a beautiful morning and trundled down the aforementioned 70-some stairs to the lake front for coffee in the Round House before breakfast.] 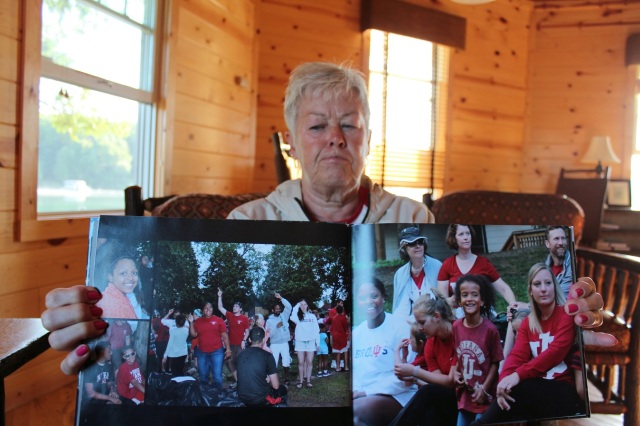 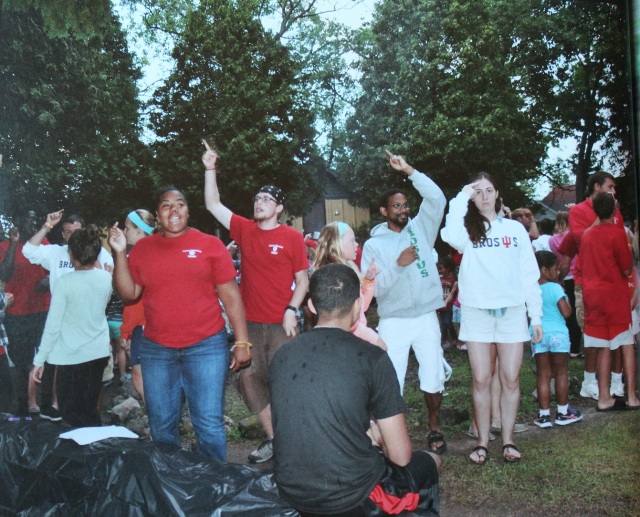 [The Round House contains copies of a family’s photo albums from previous years, and of course the Super immediately found one with Grandson Tom’s picture in it when he was a counselor.] 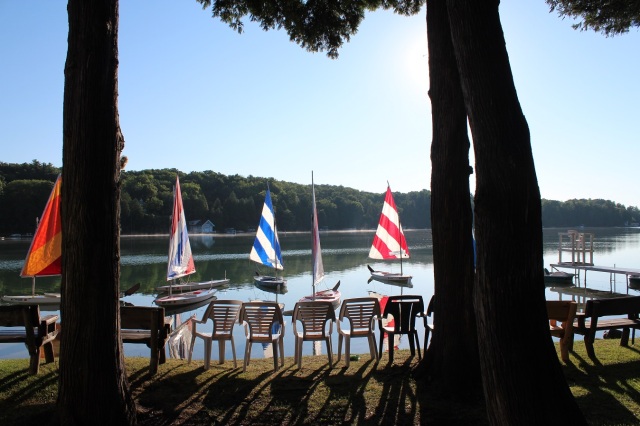 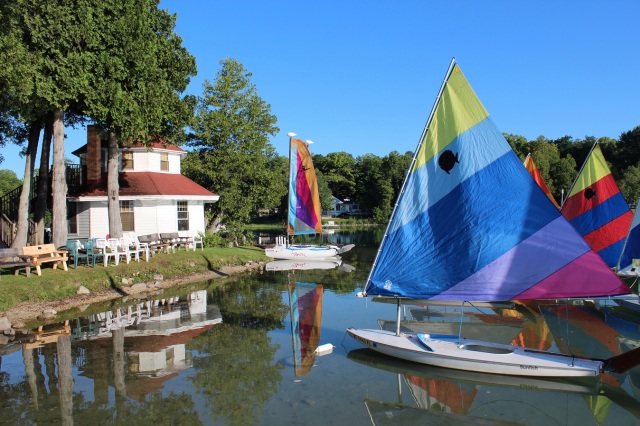 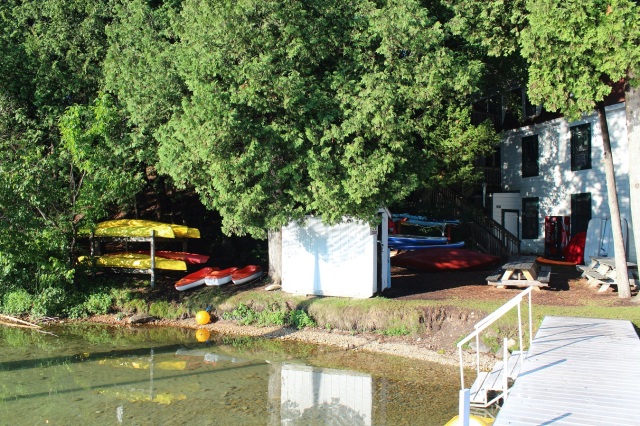 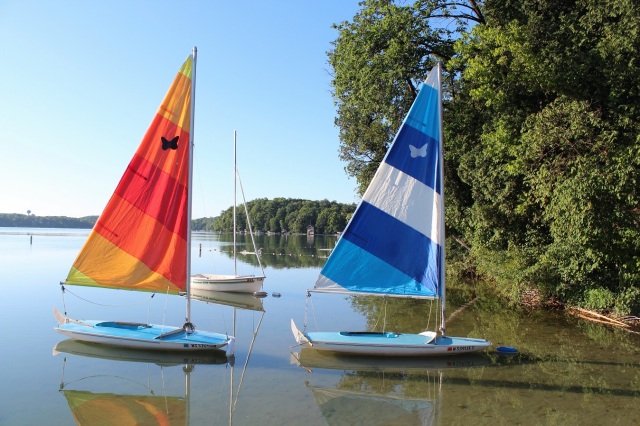 [Then a short stroll before breakfast to see how camp was doing.] 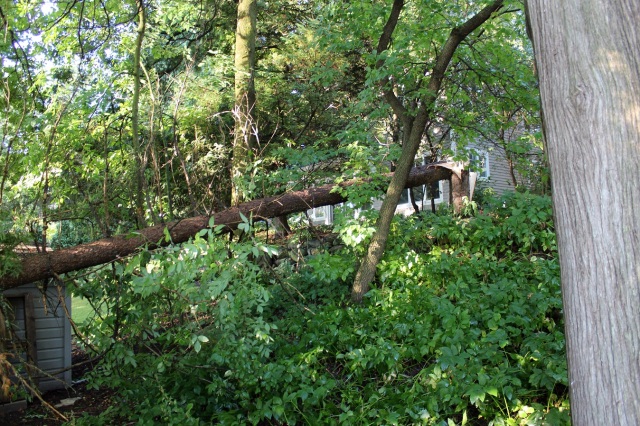 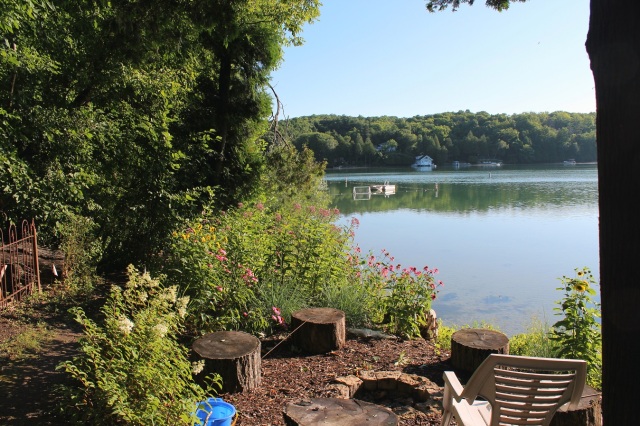 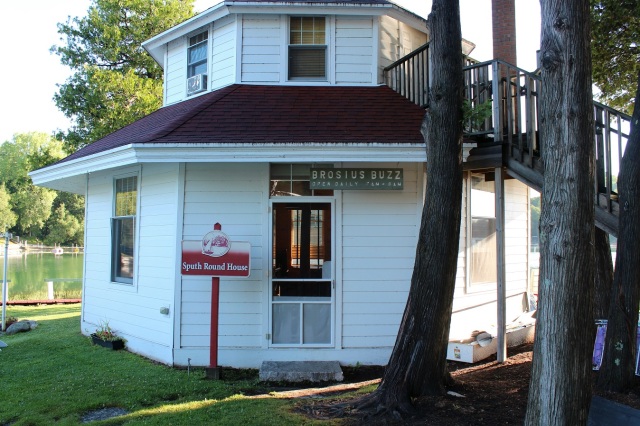 [At breakfast, we heard a tree was down at a next door property blocking the path that circles the lake.  It was.  The owner had it cleared in short order because circumnavigating lake walks are a big part of camp.] 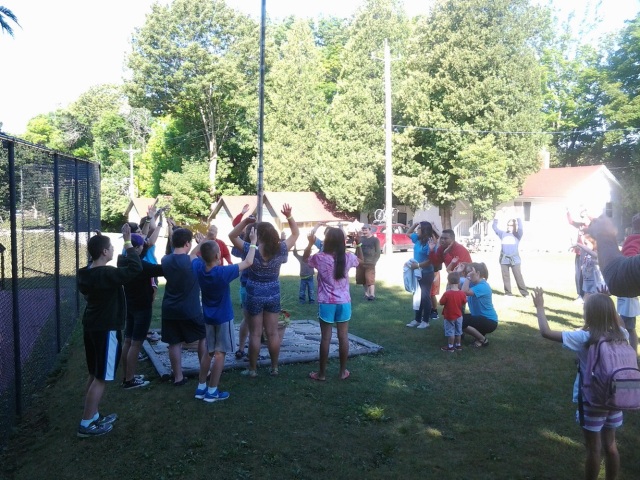 [Back up to the cottage after breakfast, the Super captured the 9 o’clock flag raising and kids singing “the birdie song.”] 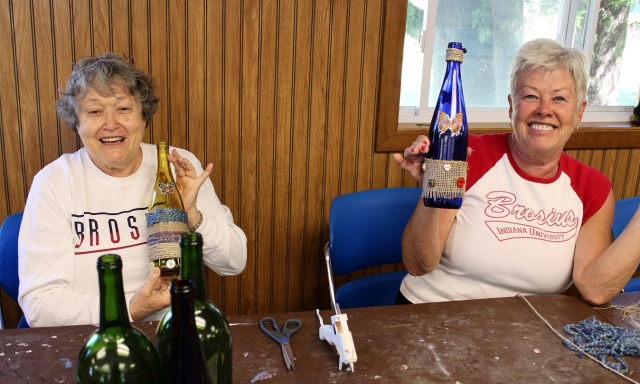 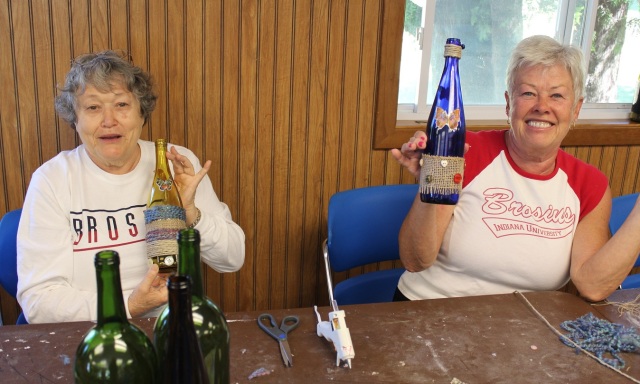 [Then let the day’s excitement begin with The Biddies crafting . . . ]

[Then a little photographic housekeeping around our abode . . . ] 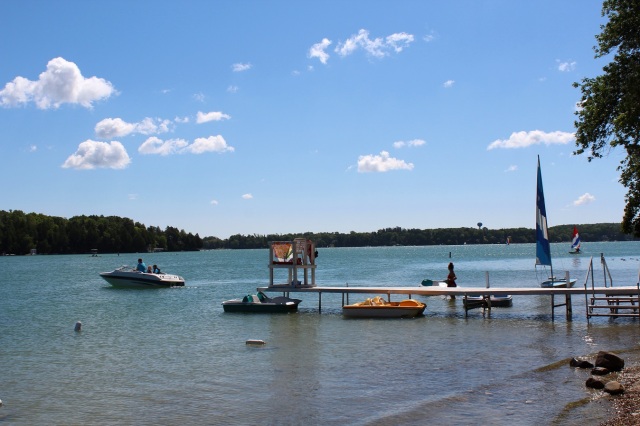 [Then grab your book, head back down to the lake, watch sailing and the Super grilling the lifeguard . . . ] 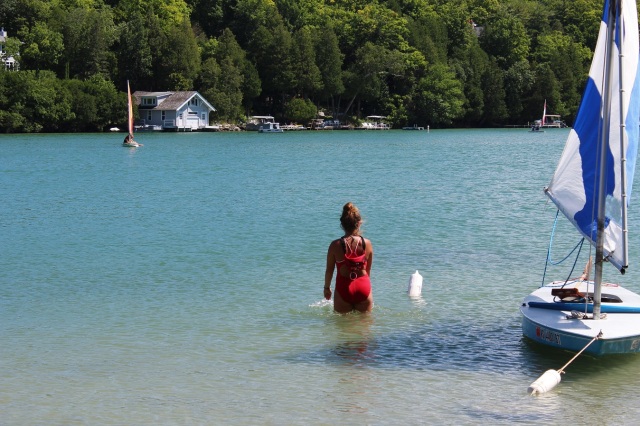 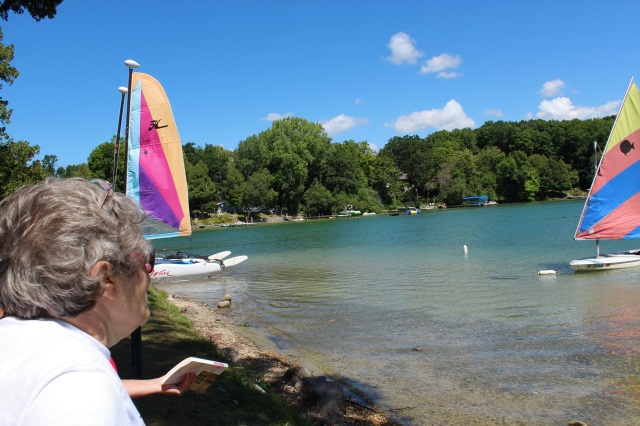 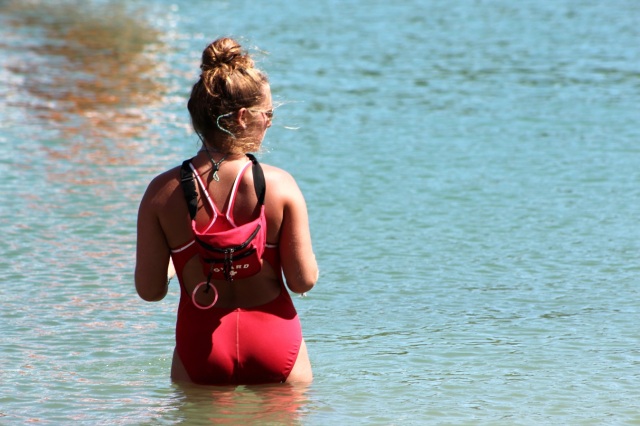 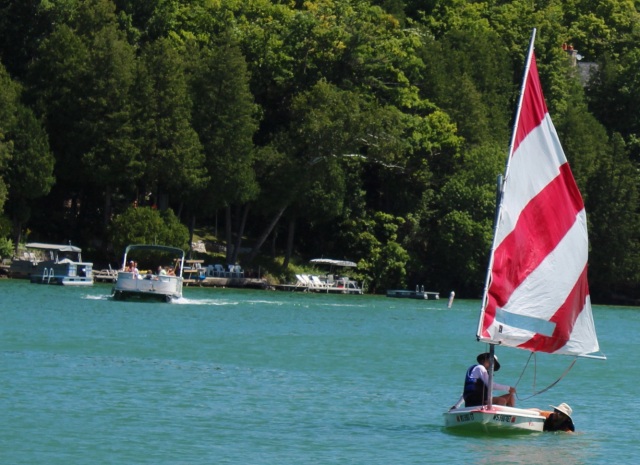 [The boat catcher, ultimately he who would win the regatta, a grandpa who has the audacity to be in shape and paddleboard, and practice sailing . . . ]

[And The Biddies worked up an appetite for lunch.] 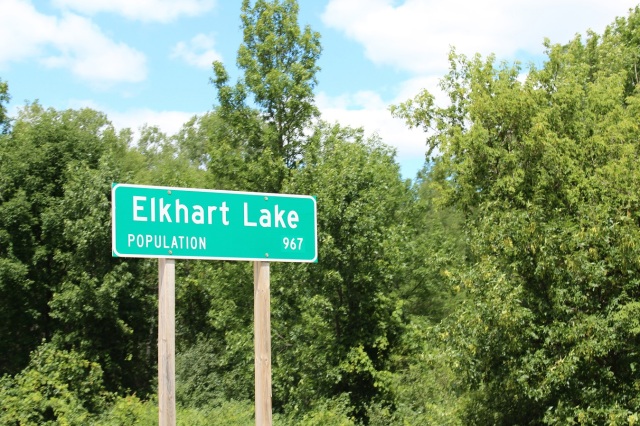 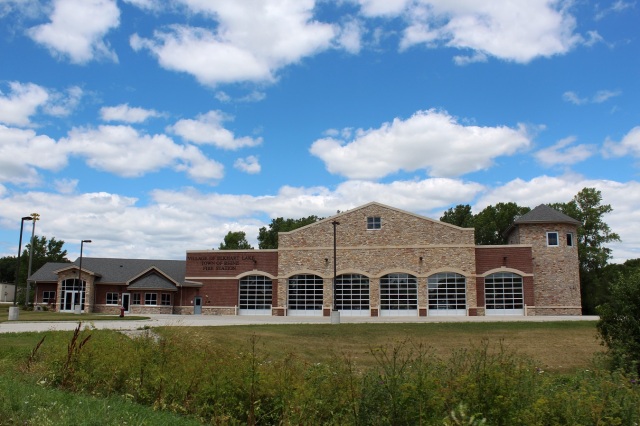 [Then we took a road trip back to Plymouth for supplies, past the Elkhart Lake fire station (for a town of 1,000?  for the Starks), past Road America where there was serious racing all week.] 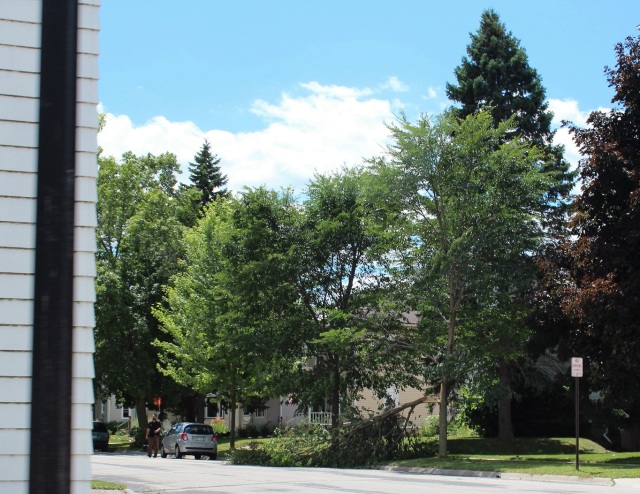 [Continuing past Road America to Plymouth, which was hit hard by the previous night’s storm. Trees were down all over town.]

[Past the Plymouth cow (their Big Ole), and on to Vinnie’s, Plymouth equivalent (in a way) to Ron’s Warehouse.]

[Back to camp for dinner with family and friends.] 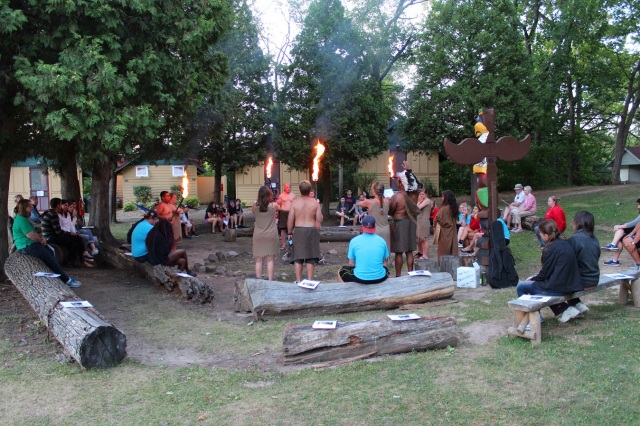 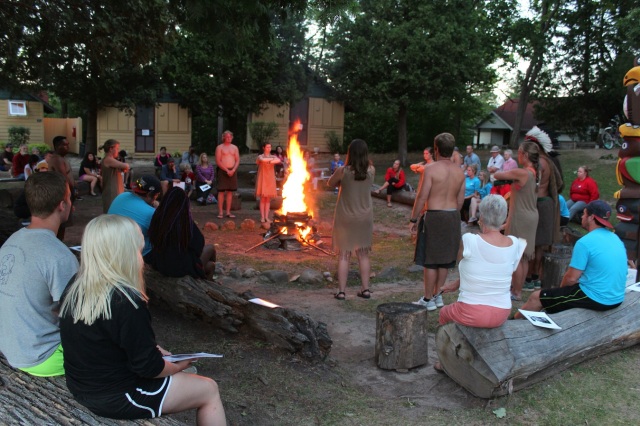 [Then back up top for the one-night-later opening night camp fire.  Then I was tired.]

Kilometers are shorter than miles. Save gas, take your next trip in kilometers.  ~  George Carlin  [We took the Super’s VW diesel convertible, which seemed appropriate to Carlin’s quote, getting 73 kilometers per gallon!]

Up next:  Camp all week.