Wait Till Next Year! *

*  OK, everybody says that . . . but more about that later.  On Thursday, March 12, our 2nd-seeded Cards lost to the 1st-seeded Thief River Falls Prowlers in the section 8AAA championship at St. John’s University, 43 – 42, in a game that was that close all the way.  It will be the Prowlers first ever trip to the state tournament, so congratulations to them.

[The biggest problem our Cards have for the future is their aging fan base.]

[Since the supervisor did such a great job on the first picture, we’ll feature her efforts here as well.  Upon arrival at the St. John’s University gym, our Cards in warm-up.] 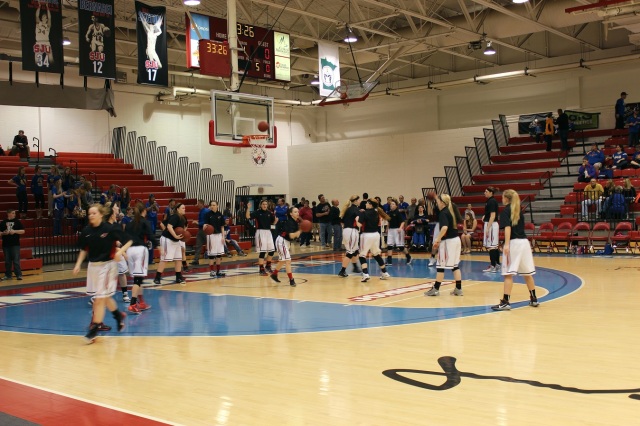 [My first effort at the same shot the Super just took.  There was some discussion as to whether these were new uniforms or not.  Since this was the first time we had seen the Cards in their traveling whites this year, we weren’t sure?]

[The game was tied 33 minutes before it even started and pretty much stayed that way during the entire game.] 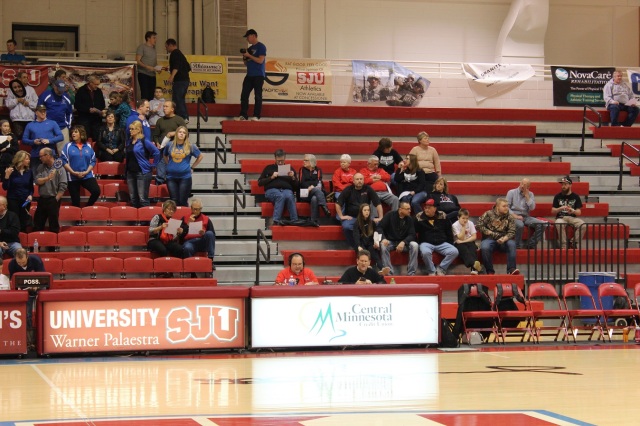 [The Voices were prepping for their pre-game show.]

[My high school principal and Mrs. High School Principal (on the left) were perusing the Blizzard menu from the Albany Dairy Queen for a possible stop on the way home.  Incidentally, we beat Albany to get to this game.] 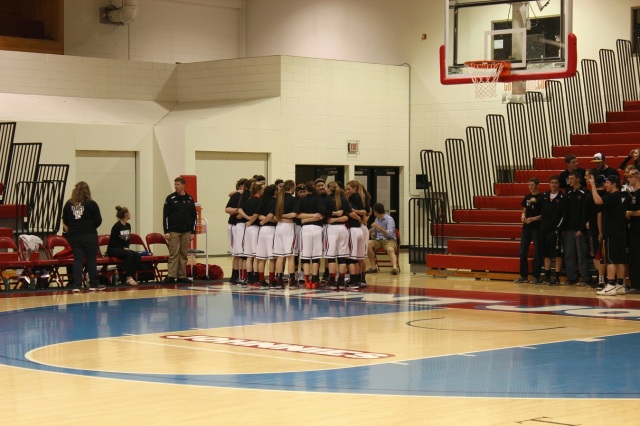 [So, we’re stopping at the Albany DQ after the game?] 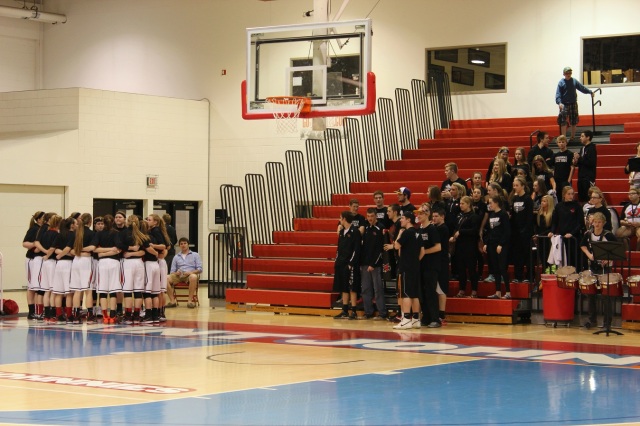 [Is the boys’ basketball team stopping there too?]

[So, Prowlers, did you enjoy your 4-hour trip to get here?]

[Will the Albany DQ still be open after the game?]

[The Cardinal tip drill – how we end every pre-game warm-up.]

[Inadvertently captured a member of the school board arriving here.  He was then off on a mission to recruit three 6’7″ players for next year.]

[I really go for that Health bar Blizzard!] 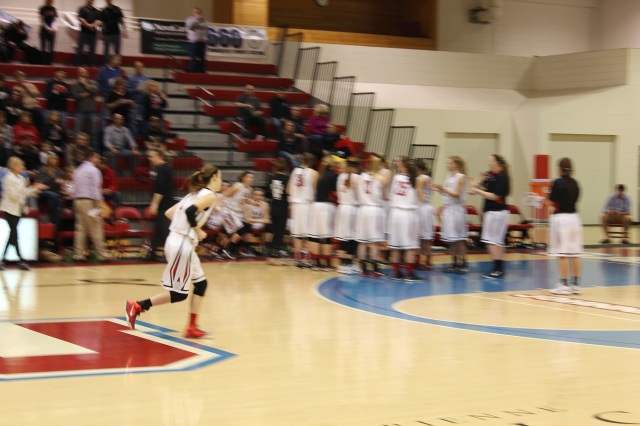 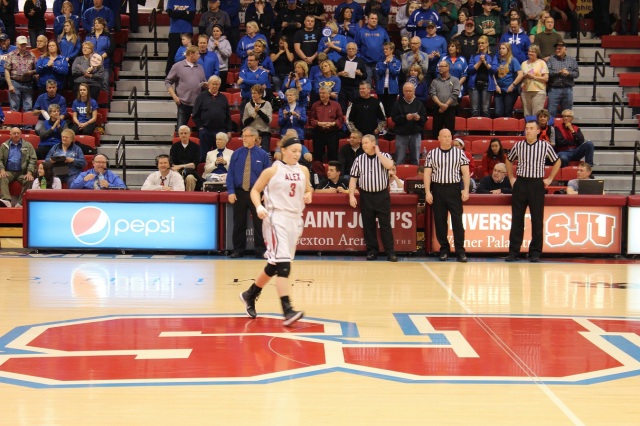 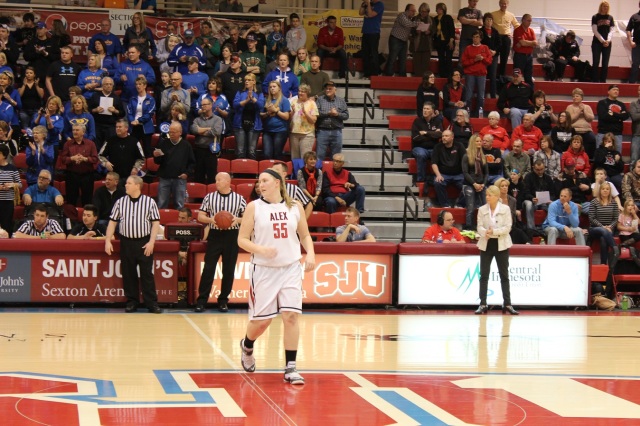 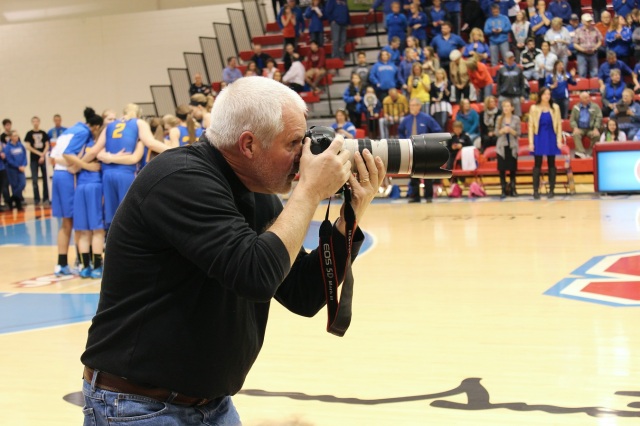 [The Competition, undoubtedly getting better shots than the ones I just took.] 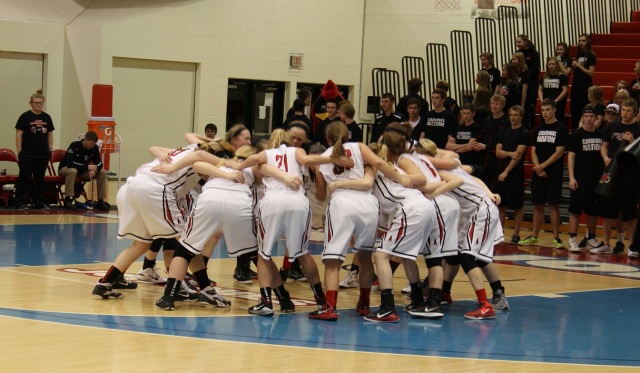 Here’s a video of the game’s commencement.  You will see over 5 minutes of action during which the only points scored were two free throws by Macy at the end.  In Kendall’s defense (yes, her first 3-point attempt here was a bit awry), her next 3-point attempt from about 5-feet beyond the line drew nothing but net.  But you will also get an idea about why our Cards led all of class AAA in fewest points allowed this year!  Love that Cardinal ‘D’! 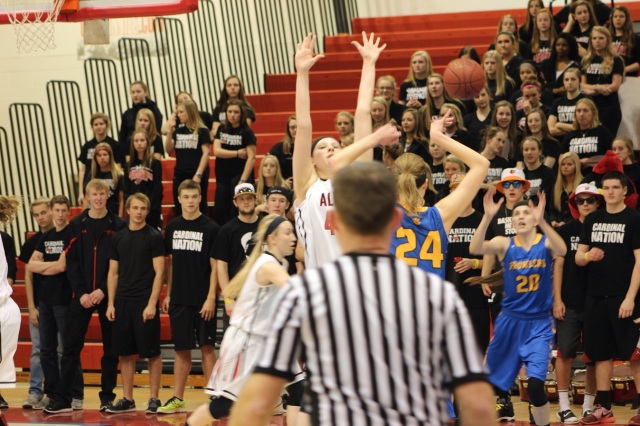 [Brooke defends a pass as Macy makes a break for it.]

[A Prowler attempt . . . will it?  Their frontline was 6’3″ and 6’2″.  While they weren’t very mobile, height alone clogs the lane defensively.  And if they managed to get the ball underneath offensively, there wasn’t much we could do to prevent a lay-up.]

[Their three perimeter players I thought were surprisingly good.  They were longer than our guards.  Here Kendall, who fouled out late in the game, defends one of them.] 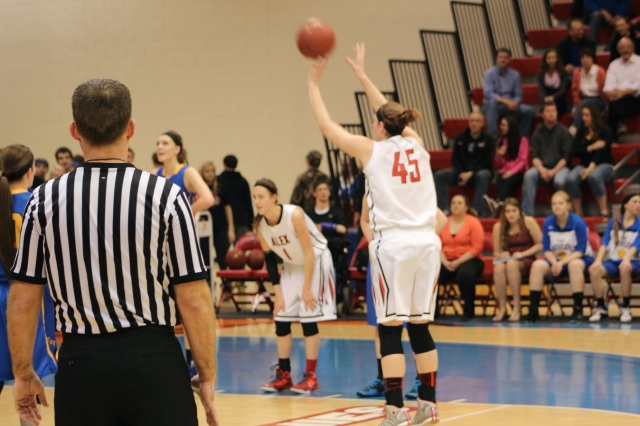 [Brooke had a terrific game against all their height.  It’s really too bad we didn’t make state in her senior year.] 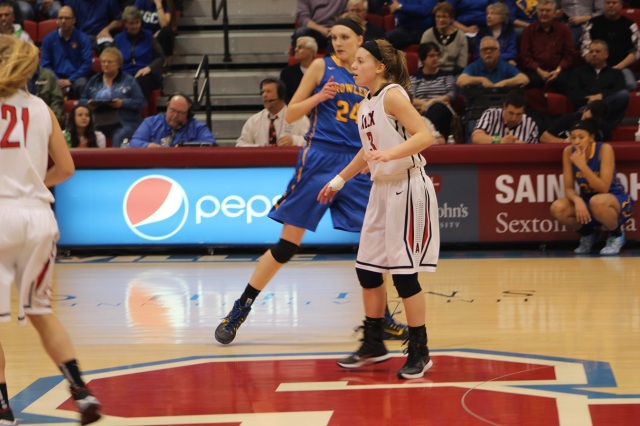 [Macy on the defensive point.]

[Brooke hustles back to keep an eye on their 6’2″ forward.] 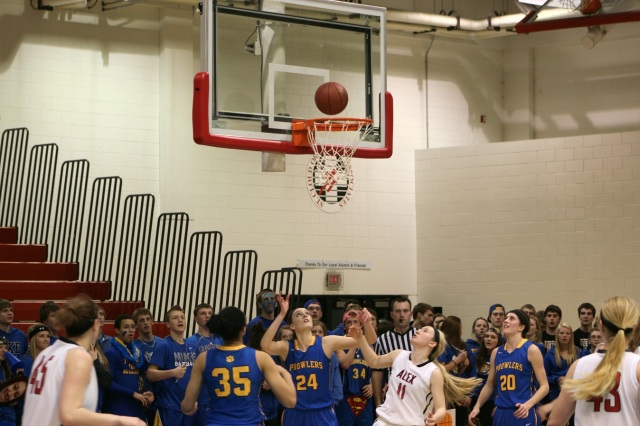 [Eyes on the prize!] 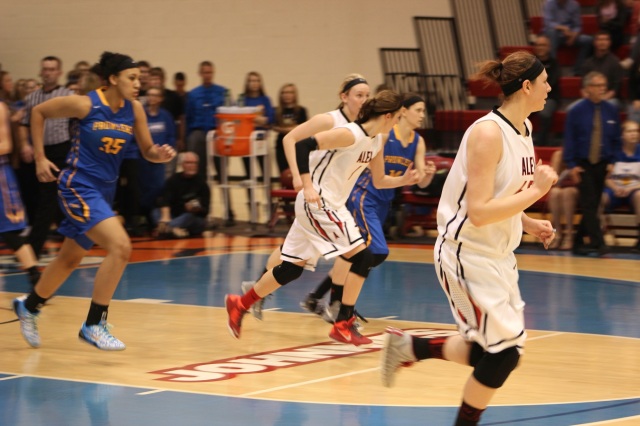 [As Brooke moves out to defend her shot.]

[A defensive game, I got mostly defensive shots.] 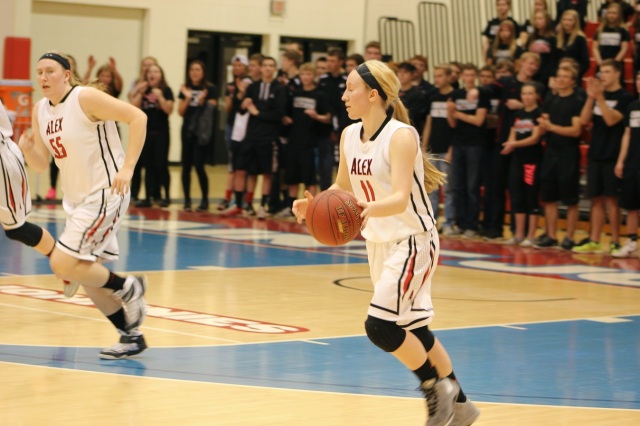 [Chey and Macy bring it up.] 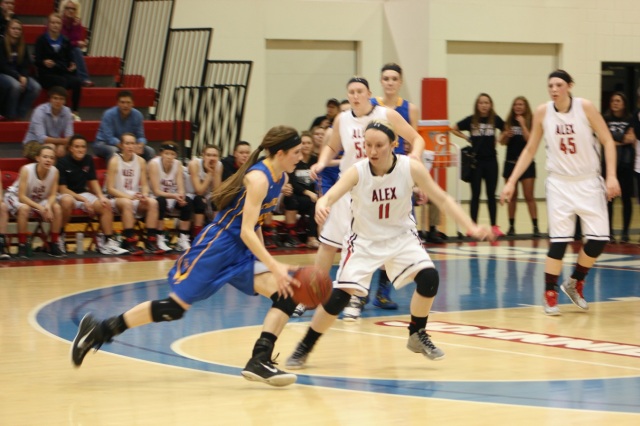 [But back to the defensive end.]

[At the half.  I thought we were tentative offensively all night.  We never pushed the ball – I don’t recall a single fast break point?  And while their guards made it difficult for our guards with their length, our bigs certainly had a mobility advantage over theirs.  It’s likely that with a “shortened” bench at this time of the season, we wanted to save our energy for the defensive end.  I can’t imagine them being able to score any more against us than they did.]

[Emma readies to inbound to start the 2nd half.]

[Brooke scored 20 and was solid from the line all night.  No. 2 for the Prowlers was their 6’3″ player who scored on some key put backs in the 2nd half.] 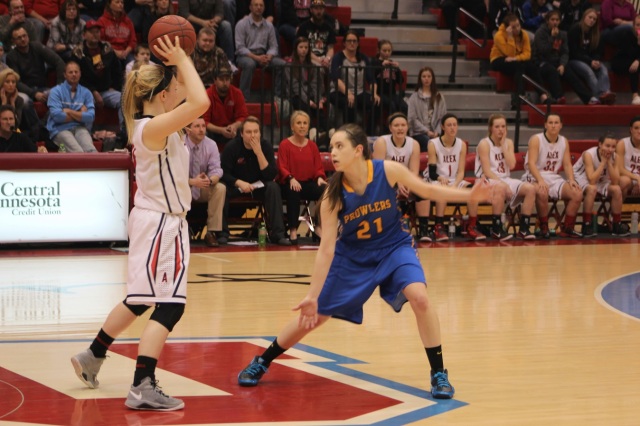 [And Macy had a hard time getting good looks all night as the Prowlers overplayed the passing lanes.  In hindsight, we may have brought Brooke and Chey outside more, they’re both good 3-point shooters, to open up some back door cuts.  It worked with Kiyana a couple of times and that . . . ]

Will likely be the strategy next year.  This year, as Brooke and Chey continued to develop as players and were terrific down the stretch, we played a more conventional half-court game to take advantage of their, and Kayla’s, skills as inside players.  Next year we’ll likely have thousands of players all running as fast as they can all the time.  We’ll have tremendous numbers as both the JV and freshmen teams had terrific years and those players will be moving up.  We won’t have a single senior on the team, and yet we’ll be very experienced.  Kayla will be our lone returning interior player, and I’m not sure if she’ll have any teammates in that category.  So, it will be whippet time, and it will be fun to see speedsters like Kiyana and Kelby tearing up and down the floor.  Back to the all the time full court press raising havoc wherever we can?

Thanks, and congratulations, again to the team and the seniors.  This team far exceeded my expectations from the start of the season.  I thought we lost too much from the previous year.  But Kohler said we’d win 20 – and we did, finishing at 21 – 7 and ranked in the top ten in the state.  Let’s do it again next year!  🙂

p.s.  Did you ever see the snow disappear this fast before?  I was at Woodland Elementary just last week (yes, still trying to prove I was eligible to move on to junior high when I did), and the kids were out playing in the snow piles, enjoying what little winter we had this year. 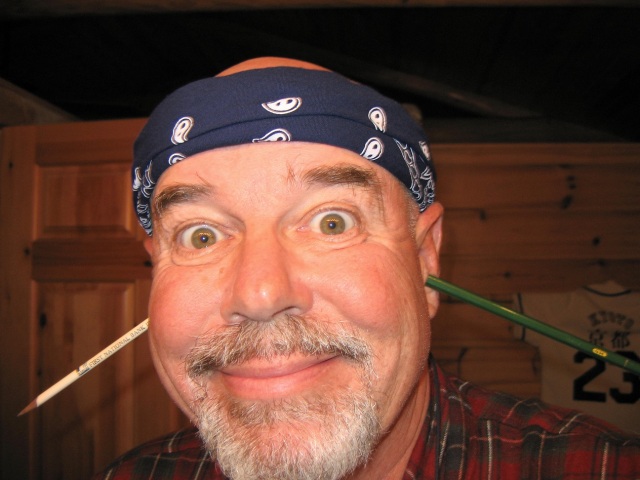 Whatever women must do they must do twice as well as men to be thought half as good.  Luckily, this is not difficult.  ~  Charlotte Whitton

Up next:  Road trip?  (Yes, there are rumors of a clothing optional beach for seniors.  Not to worry though, nobody looks at each other.)