[We missed our first girls’ hockey section final ever.  In our non-youthfullness, we just hesitate to venture beyond the politically established boundaries of Alexandria, in winter, in the darkness of night.  Not that girls’ basketball is a bad alternative, mind you!  This Friday night game was turned over to many of the JV’s for most of the second half.  The Cards are now 16 – 4 overall, 11 – 1 in the conference.  Can they follow their sisters-in-skates to the ultimate destination?]

[And after the game, the team met with their adoring fans, and the paparazzi (that would be me), to sign autographs.]

Super Fan Roger Riley, he of the long “winning streak” for girls’ hockey, sang the National Anthem before the game – I believe his first time for girls’ basketball.  He received kudos all around.  I left the video running for the player introductions and the first couple of plays: 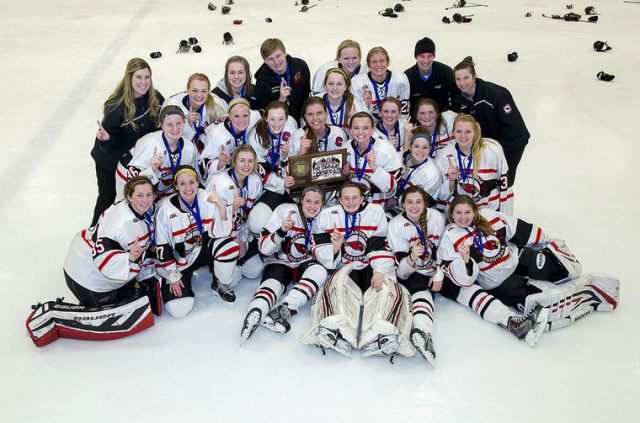 [We interrupt this interlude to bring you breaking news!  The girls’ hockey team defeated Detroit Lakes, 3 – 1, in the section 6A final in Fergus Falls, and will go on to the state tournament for the 10th time in the last 12 years.  Yeah, we’re getting spoiled.  They’ll play at the XCel Energy Center in St. Paul next Wednesday.  The Super has already made hotel reservations.  (Voice of Alexandria photo by Mark Ripley.)] 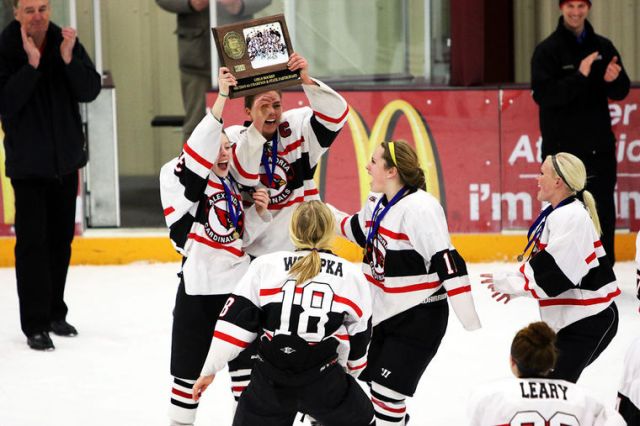 Meanwhile, back at the basketball game . . .

[You may recall the photo subject was featured in the last blog post as the potential point guard for Kohler’s 800th win.  During the JV game, Coaches Kohler and Hatlestad  came over and presented a Cardinal “game ball” to the granddaughter of Super Fan Classmate Ruth Helie Anderson (“Ruth, what’s her name again?”).  She’s now 13 months old and has been coming to the games since she was one month old.]

[Wrapping up the JV game with Alayna Aanerud (3), sophomore guard, at the free throw line.]

[All our JV teams are having monster years.] 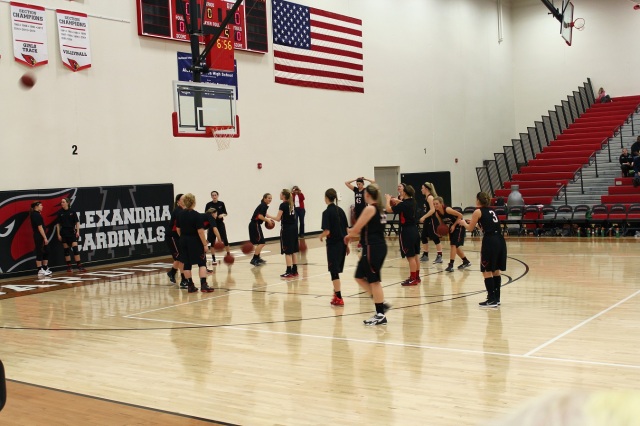 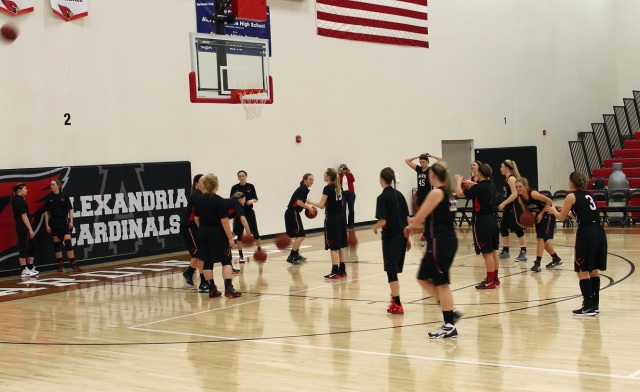 [Pre-game warm-up shoot-around and coffee-klatch.  I just wanted to see if I could use four hyphenated words in one sentence.]

[The game . . . that actually started during the video.] 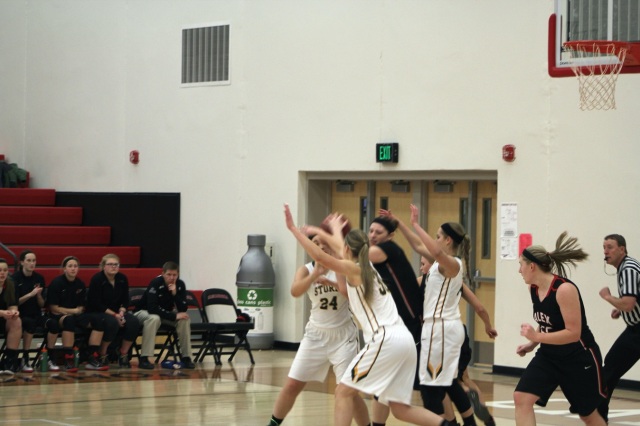 [Not a game for the faint of heart as Brooke Heggie is surrounded by many of the Storm’s finest.]

[Brooke, a very good free shooter, did the bulk of our first half scoring.]

[Cheyenne Hendrickson (55) had a terrific all-around game, rebounding and with assists, and Kiyana Miller (21) was her usual pest self on defense and is becoming more and more comfortable in the point guard roll when Macy needs a blow.] 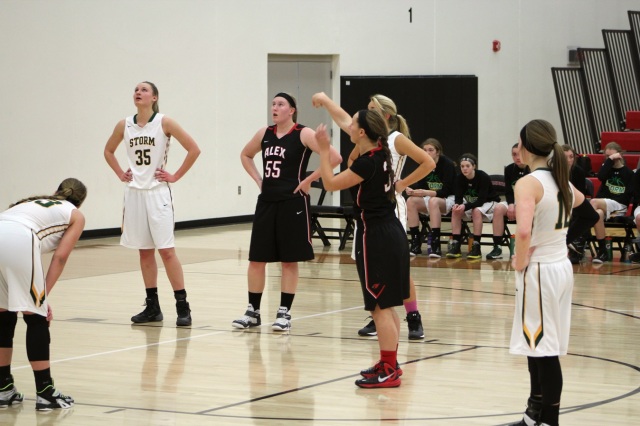 [OK, Carly Dropik (33) didn’t make these – but her job isn’t scoring, it’s defense and everything else.] 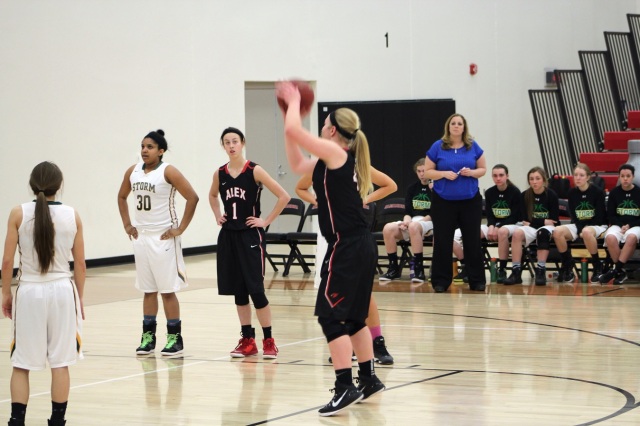 [Kayla Feldhake (43), a sophomore forward, adds an inside presence with Heggie and Hendrickson.]

[Yeah, you can’t nitpick this, but . . . we didn’t shoot that well.  In fact, Macy, with Brooke our leading scorer, didn’t score in the first half.  We started the 2nd half with a play designed specifically for her to get a lay-up and on the board, and it worked!  🙂  ]

[The 2nd half tip-off.  OK, there is no such thing.  Kiyana readies to inbound the ball to Macy.] 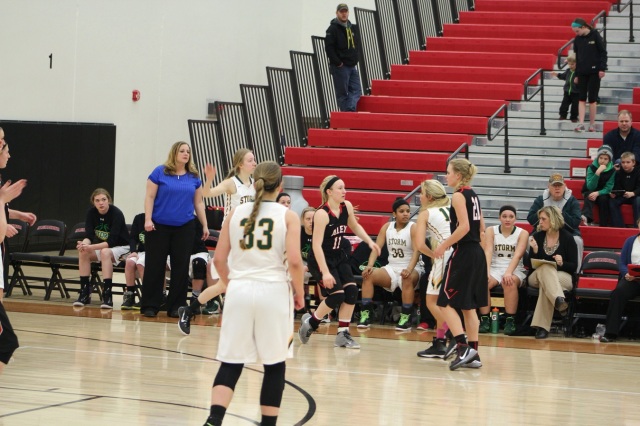 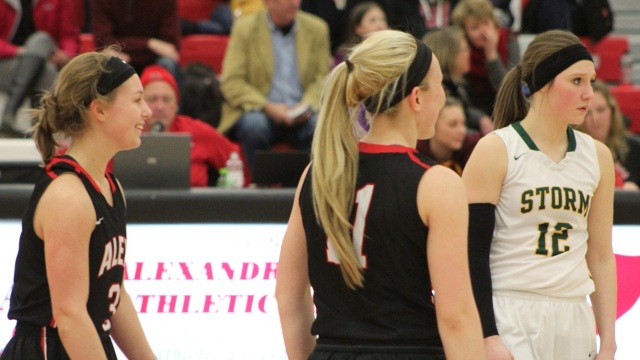 [Kendall Kohler (3) and Macy, backcourt mates since they were the age of . . . well, Ruth Anderson’s granddaughter!]

[Macy, 2 for 2, though the second slightly grazed the rim on the way through.] 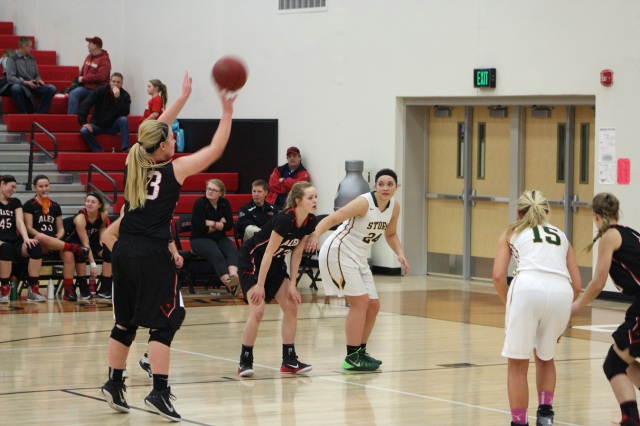 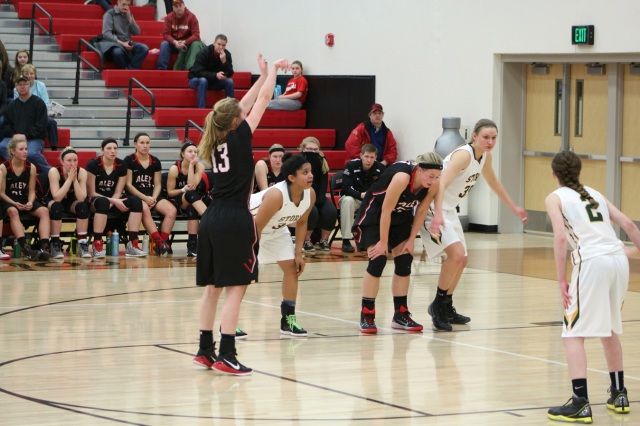 [Kelby Olson-Rodel (13) at the line.  She and Kiyana can really motor on the wings.] 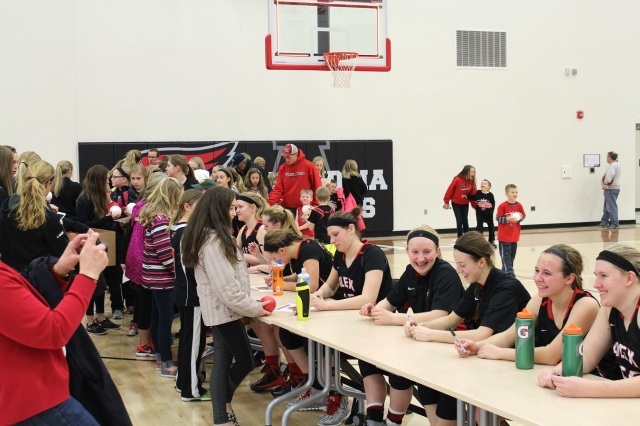 [And the post-game autograph session – a good way to connect with future Cardinals.]

[Kohler slipped me a copy of the photograph used for the autograph session.]

[Happy Valentine’s Day and anniversary to the Supervisor!  🙂  ]

Don’t you guys ever practice?  –  Long-time Bowling Green hockey coach talking to a colleague basketball coach regarding hockey teams only needing one time-out per game while basketball teams have millions! (As recently related by a TV basketball analyst.)

Up next:  State tournament?