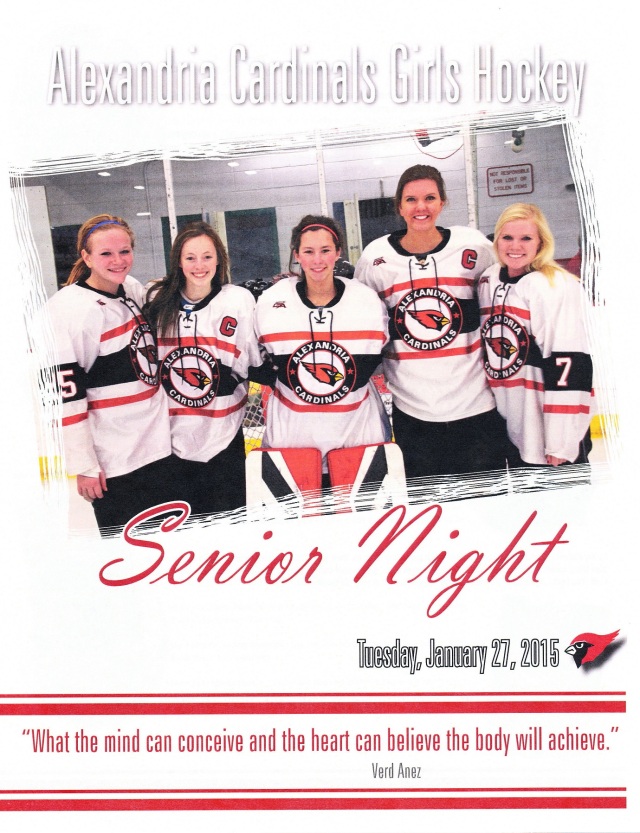 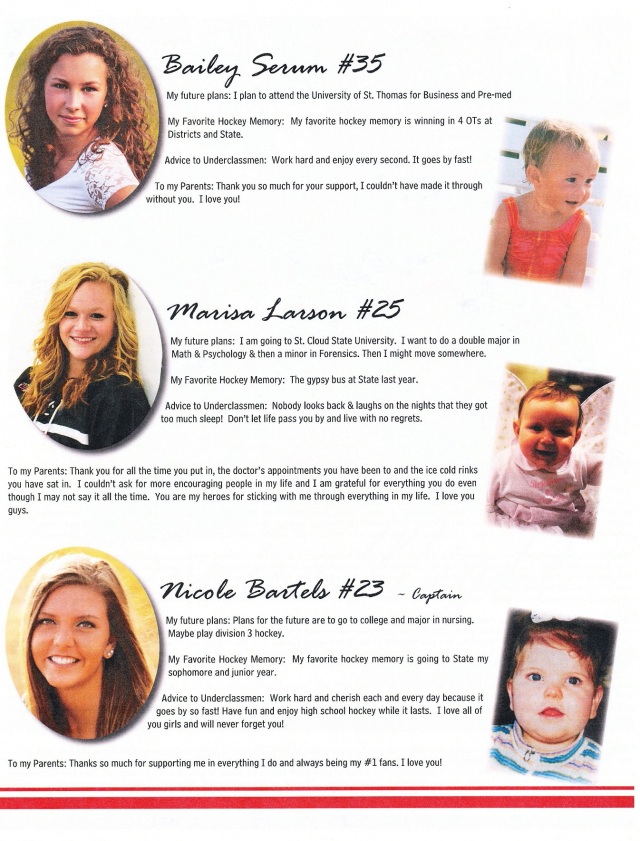 Well, another year has gone by . . . and another set of kits we helped raise from pups are ready to leave the nest.  Mixed metaphor aside, we hope we have helped support them well enough to thrive beyond the friendly confines of the RCC.  And it is always with a touch of sadness that we have to say good-bye to the seniors.  But we wish you all well, and thank you for the countless hours of $2/game entertainment you have provided for we “seniors,” who would rather not sit home at night performing foot maintenance and other such daunting tasks.

Oh, there was a game this Tuesday night,  against Wadena-Deer Creek-Long Prairie, which I believe is a relatively new conglomeration.  There was no doubt as to the outcome, but it is the kind of game the Blue Devils need to play to help develop their program.

[This is the score of the JV game.  Yes, their goalie did have a heckuva game.] 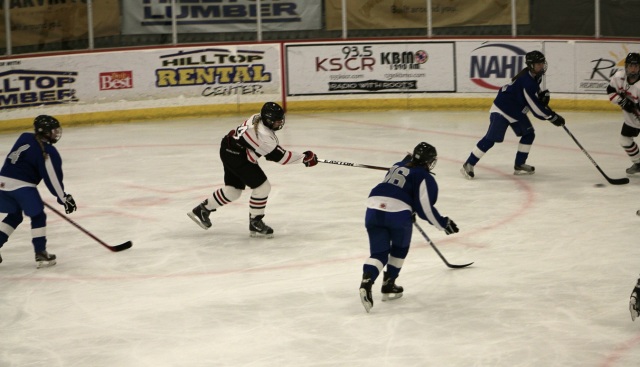 [I was there plenty early as I came directly from “senior” college.  Yes, one is never to old to learn something new.  The only problem is the old brain has run out of file space, so to save something new, one has to jettison something old, like . . . where did I park the car? So, here’s an opportunity to feature some players who hope to play varisty next year, such as Trihanna Olson (14), junior center.] 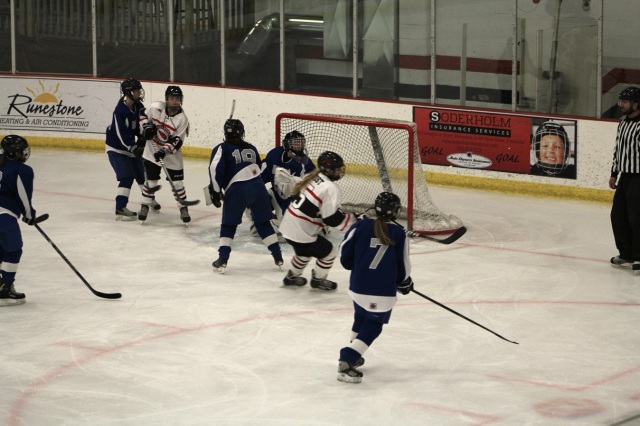 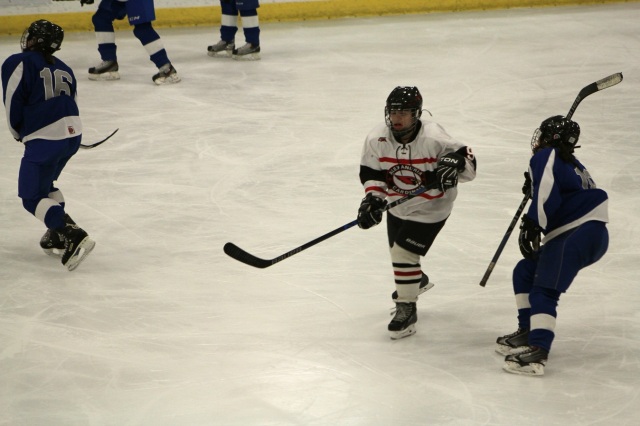 [A dual entry for Jade Bollman (9), sophomore forward, who like so many appears to enjoy snacking on her mouthpiece.] 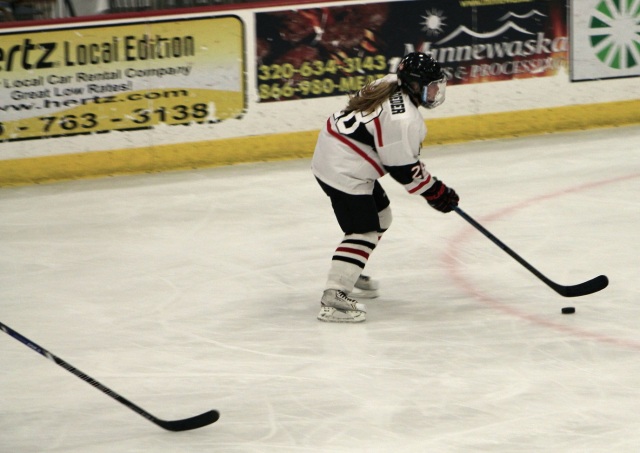 [McKenna Schroeder (28), junior forward, who also plays with the varsity.] 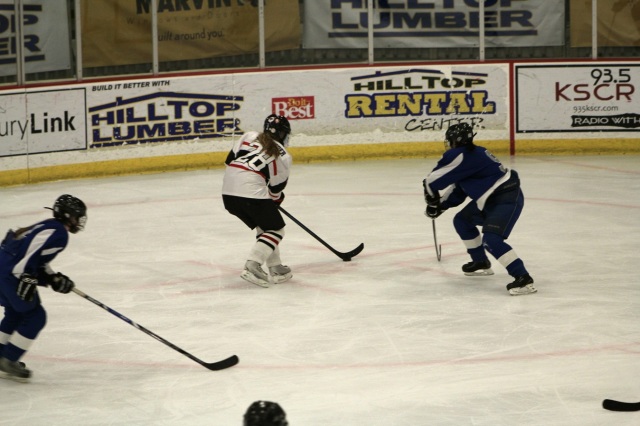 [Jade again, trying to keep that pesky puck in tow.]

[And Trihanna with a shot.] 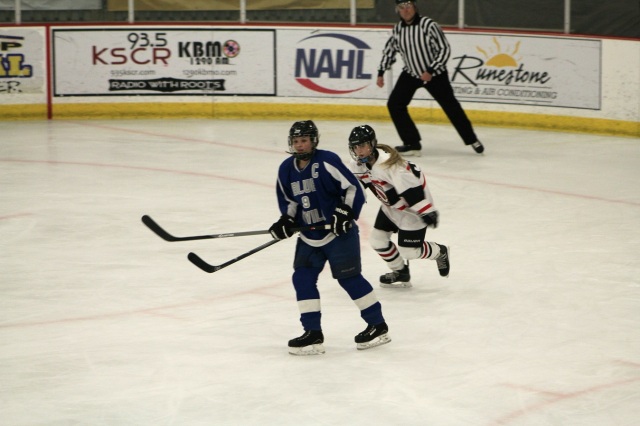 [A Cardinal who has skillfully shielded her number from view.] 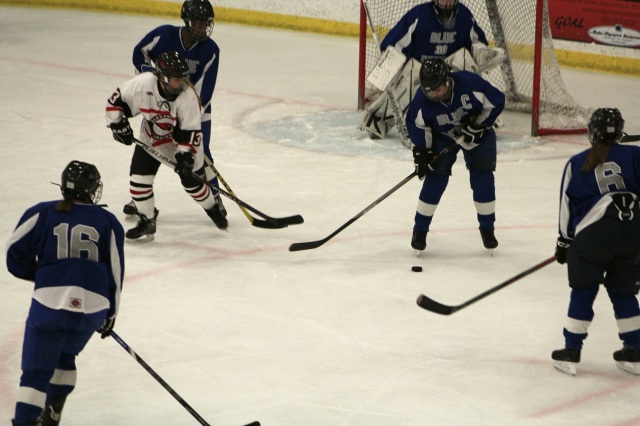 [Kaia Illies (13), sophomore forward, has the Blue Devils at a 1-on-4 disadvantage.]

[And appears to have been successful.]

[And we wrap up the JV game with a parting shot of Jade.]

[The game was preceded by an introduction of the five seniors.]

[This is Marisa Larson.  As in previous years, the players were backlit as their hockey histories, from their parents, were read.  As in previous years, we camera types all complained about the impossibilities of getting photos during the event.  I got a couple that were passable – and apologies for not being able to get all the players.  Again, for the future, we’d like to request the spotlight be moved to the fan side of the arena . . . or just leave the lights up.] 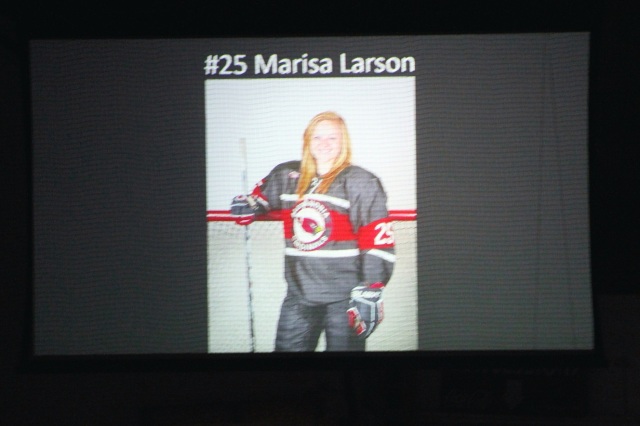 [Bailey Serum with her folks.]

[Nicole Bartels with her dad.  And that’s the best I could do.]

[Lights back up, Nicole hugs her mom.] 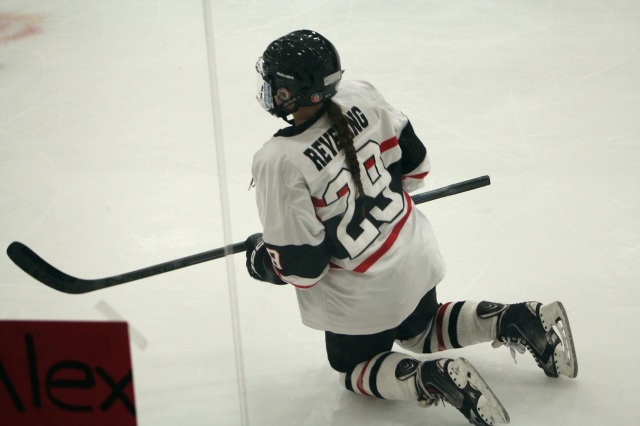 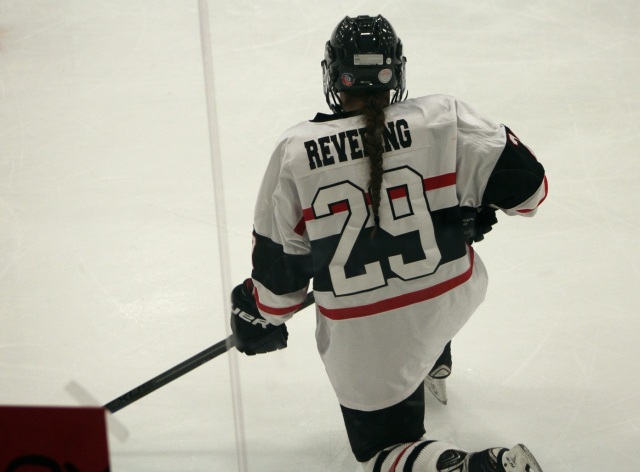 [I believe Little Rev has now become “The Rev.”] 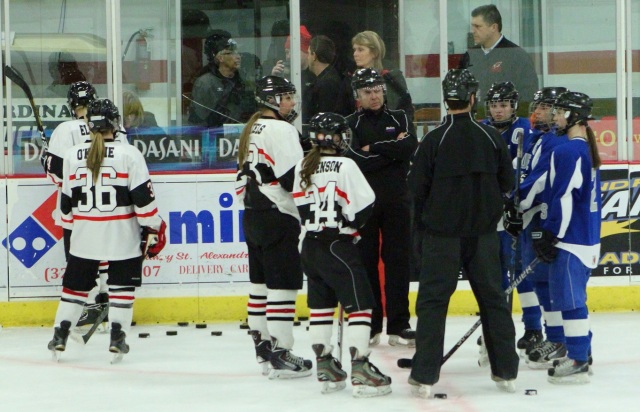 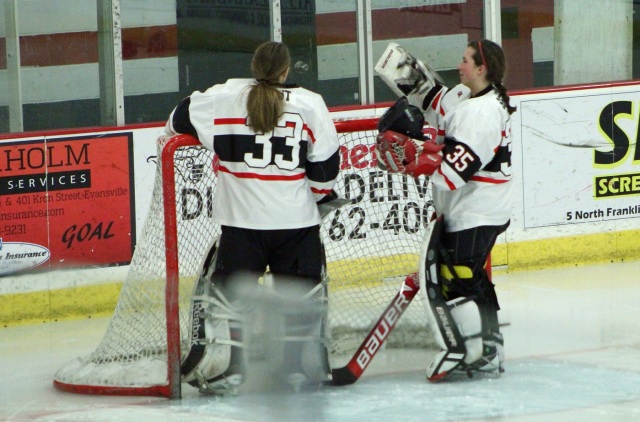 [A breed apart, nobody knows what goalies talk about?  On senior night, it was Bailey’s (35) turn in goal.  Amy Jost (33) is probably just reminding her to duck on the high shots.] 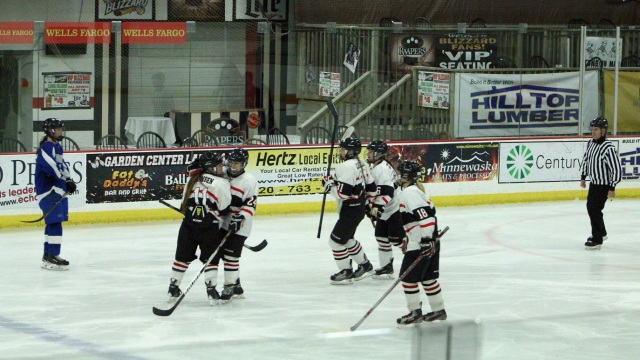 [And the Cardinals immediately began scoring goals.  Hanah Hansen (11) had a hat trick before the game was 6 minutes old.  Coach Hovel tossed his hat on the ice.  Unfortunately, it was not a natural hat trick as her teammate, Micaela Swenson (34), one of the seniors, also scored a goal between Hanah’s 2nd and 3rd goals.]

[The rest of this missive will generally consist solely of post-goal congratulatory hugs and skating to the bench for fist bumps.]

[Micaela got a second goal in the period, and Mari Wosepka (18) got a goal.] 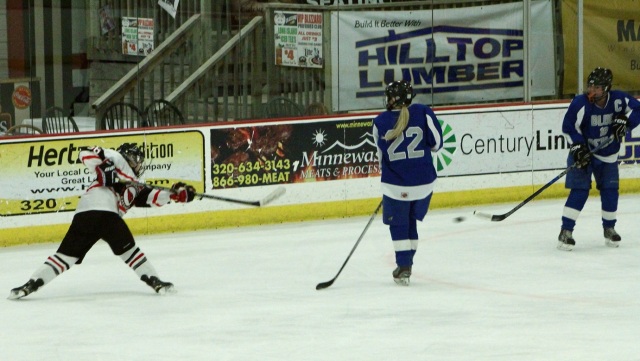 [Allison O’Kane (36), freshman defense, slaps one from the blue line.]

[A goalie alone with her thoughts . . . with the president of the Bailey Serum fan club providing support behind her.]

[My guess is this was Micaela’s 2nd goal.]

[And this is likely Mari’s goal.  You gotta be tough as goalie in a game like this . . . and they probably all go through it at one time or another.]

[And this was the end of period 1.  The shot totals were surprisingly not as lopsided as the score.] 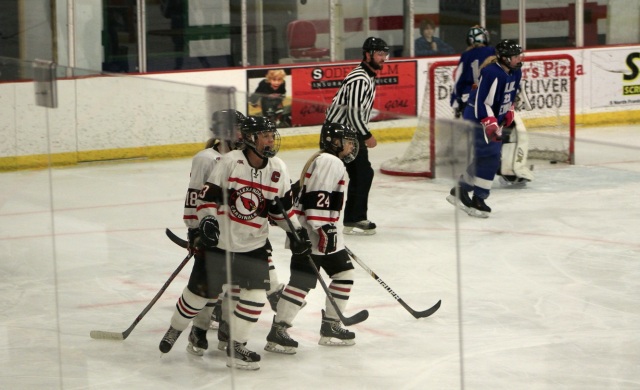 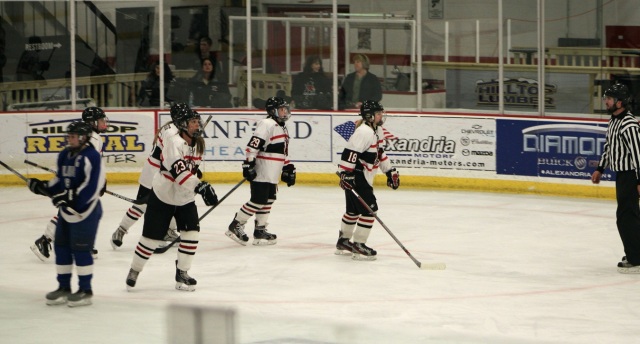 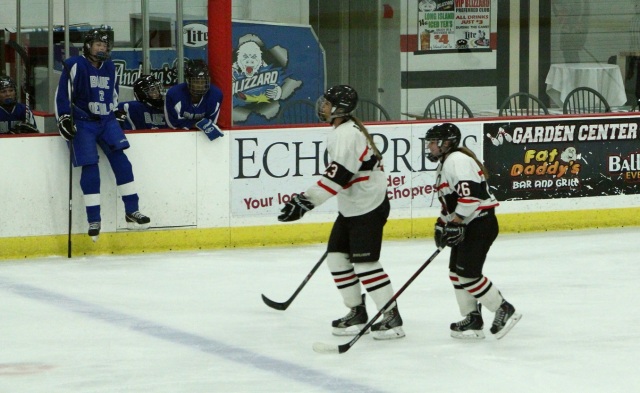 [In the 3rd period, Nicole got two more goals to complete her hat trick!  Just the kind of game a team that’s had some troubles scoring goals needs!  🙂  ]

[Bailey goes out with a win on what may be her last game at the RCC.  Thanks again to her and all the seniors.]

When everything is coming your way, you’re in the wrong lane.  ~  Steven Wright

Up next:  Another hockey doubleheader preceded by “senior” college again.  This is all getting to be like a full-time job?