*** The management and staff of this blog would like to take this opportunity to apologize to those who have been patiently awaiting the “rest” of Paris.  It seems July (i.e., summer in Vacationland USA) and yet another vacation with The Biddies got in the way.  We hope to get back to it soon because . . . the high school sports season is about to begin! ***

Regarding the title, I believe one can say anything one does is a Bucket List item (beginning with getting Stan Musial’s autographed 8 x 10 glossy about 55 years ago).  As one gets older, it becomes more pressing.  For example, the one and only Rick Steves posited that one must spend at least a week in each of the four great European cities – London, Paris, Rome, and Istanbul.  We can now say we have visited each of those cities, but only Paris for a whole week.  Will we get back to the others?  It seems unlikely now as we fitfully attempt to check off more Bucket List items – the clock is running!  You may know from past visits here that we go to the supervisor’s Indiana University alumni camp – Camp Brosius – in Elkhart Lake, Wisconsin, every summer.  I now look at this annual trek as a means to check off more Bucket List items.   I had never been to northern Wisconsin or Michigan’s Upper Peninsula . . . and they are sorta on the way to Elkhart Lake.  So this year we tacked a few more days onto the trip and . . . did it! 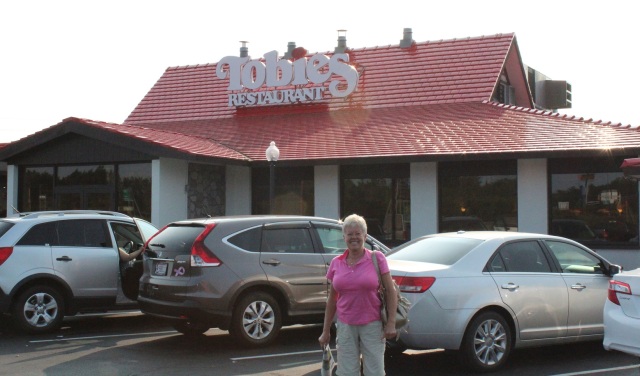 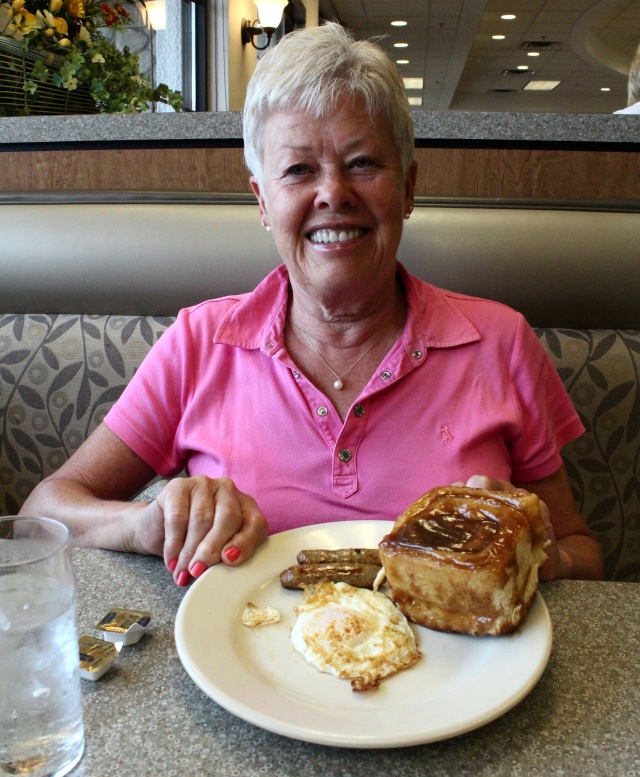 [So we began our adventure traveling directly east.  If you live around here you know that means no direct shots on a major roadway . . . it was county roads all the way to, well we’ll get there.  This was going to last 4 days longer than our usual camp excursion, for which we used to fill the Expedition to the roof line.  This time it was just in the supervisor’s VW convertible.  Our first stop as you can see was at Tobie’s (another first for us), in Hinckley, for the internationally famous caramel rolls!  🙂   ]

[From Tobie’s parking lot, we hung a right and headed for Wisconsin.] 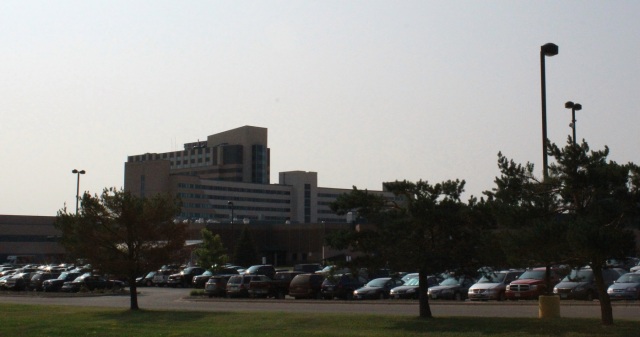 [Any time you’re in the middle of nowhere and suddenly come up a new, large monstrosity of a building . . . casino!]

[And that was right before we hit the cheesehead state . . . ] 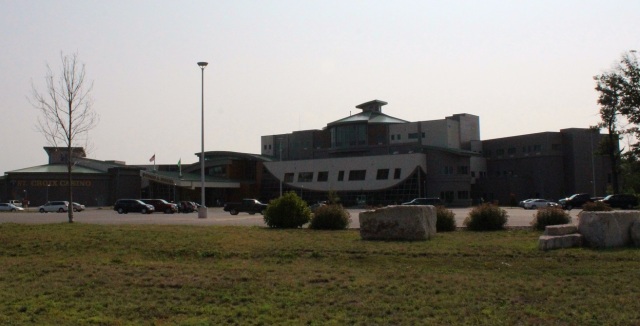 [Not to worry though, within minutes another – casino!  Really?  We have pot holes and falling down bridges everywhere?] 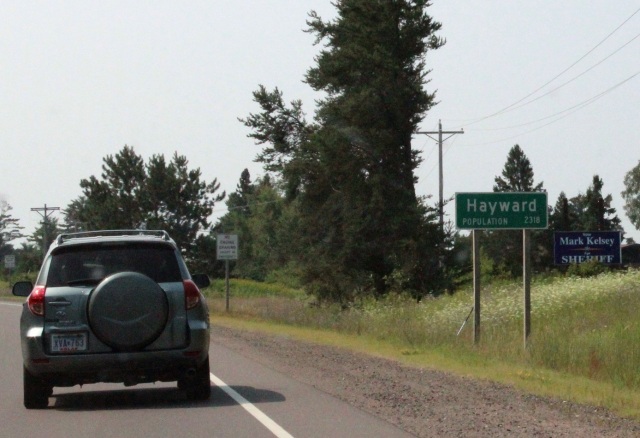 [But this was our ultimate goal in heading directly east from Alex.]

[Hayward was another first for us.]

[We even sampled Bluegill Blanc at the Hookstone Winery, right there on the main street.] 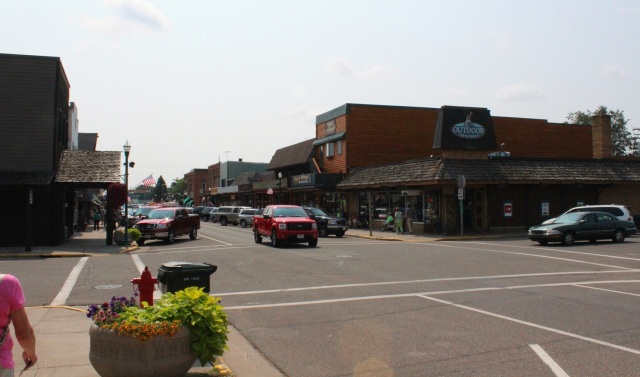 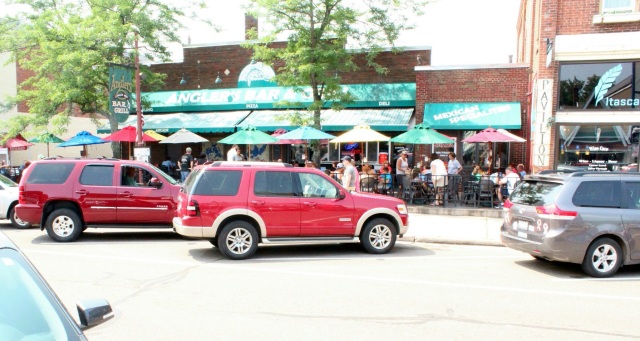 [Loved the outdoor set back restaurant on the main street.  Love to see one in Alex.]

[The National Fresh Water Fishing Hall of Fame.  It wasn’t exciting for the supervisor, so she sat in the car and waited while I paid my $7.00 for a quick photo op run through – I’ll admit I always wanted to see the giant musky (they troll for these things using a Buick for bait).  Unfortunately, I hit a camera snag that I blame on a manufacturing error because it’s happened to me several times.  When I look through the eye piece and then turn the camera switch on, I sometimes also change the camera setting because they’re attached.  In this instance I accidentally went to the “ethereal” setting and tried to recover the fish as best as I could with auto adjustment.] 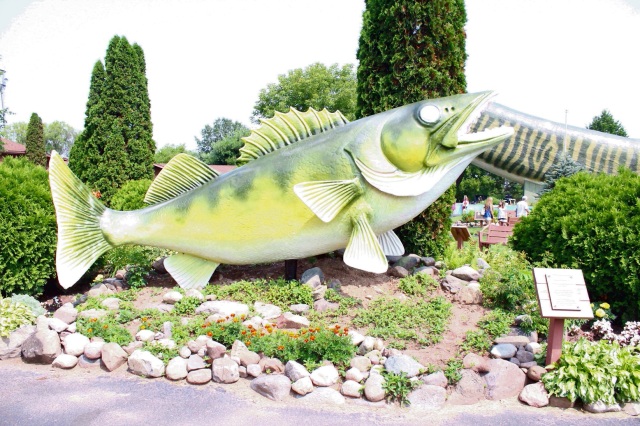 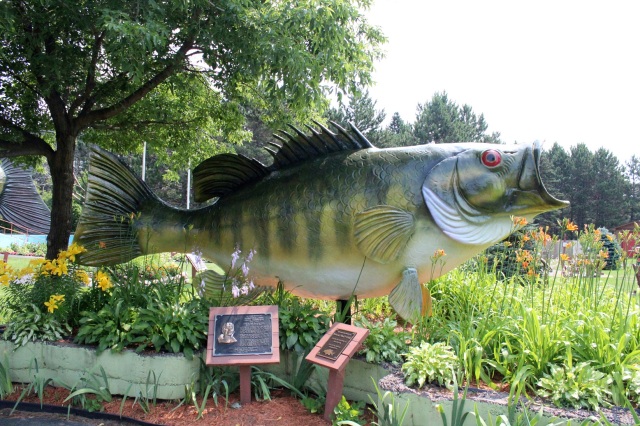 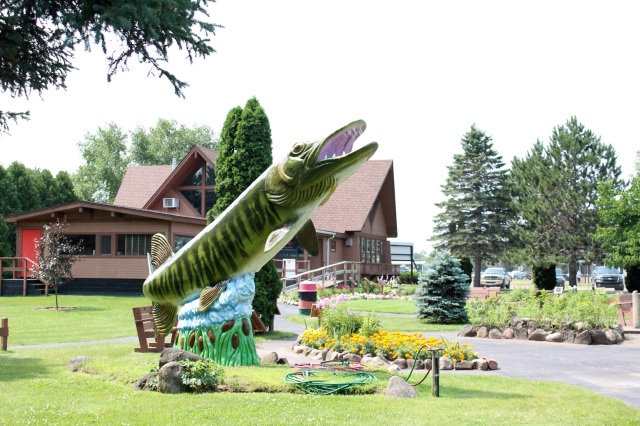 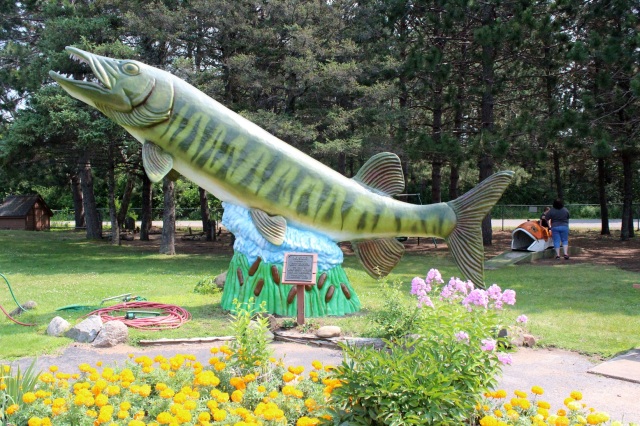 [OK, in 5 seconds identify every fish pictured here.  I thought they were way cool!]

[The lake’s maximum depth is 1,330+ feet and this display puts that in perspective with these manmade objects.] 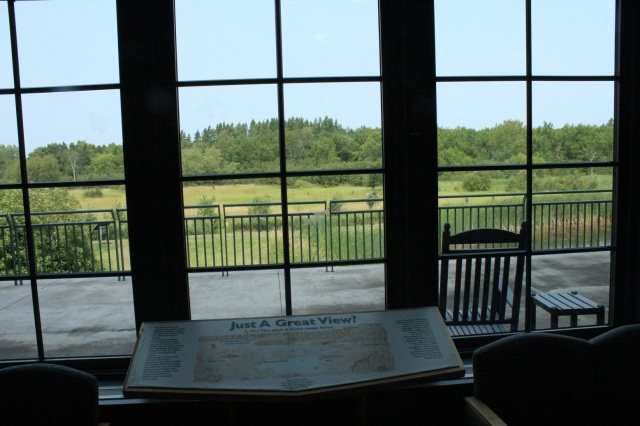 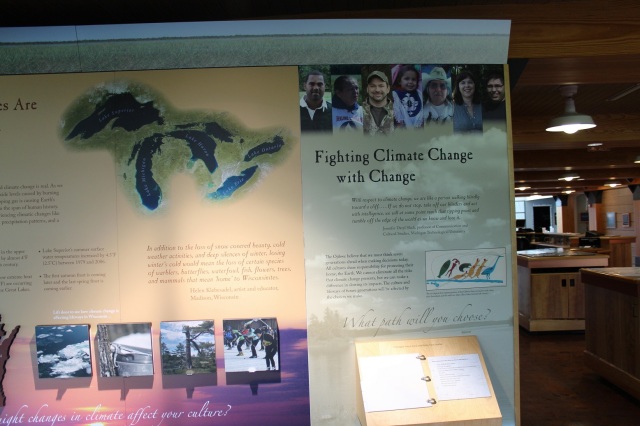 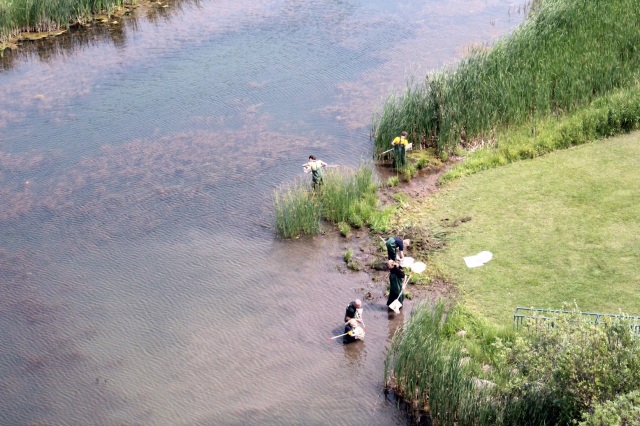 [Maybe they’re searching for signs of great white sharks, though I believe they were long ago gobbled up by muskies.] 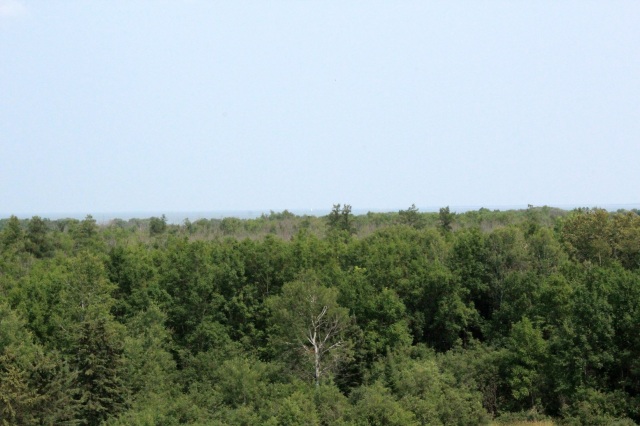 [I think that’s Gichigumi in the distance.] 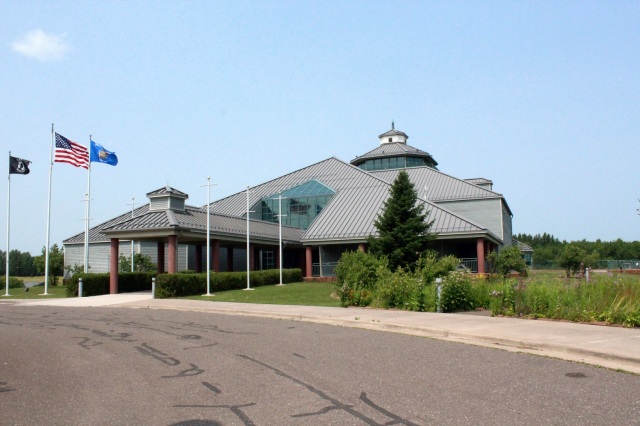 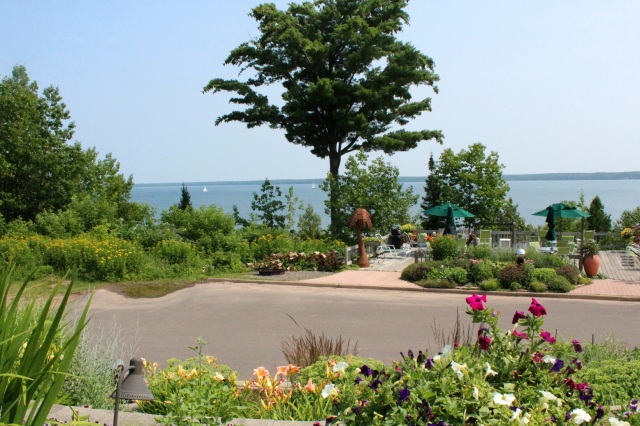 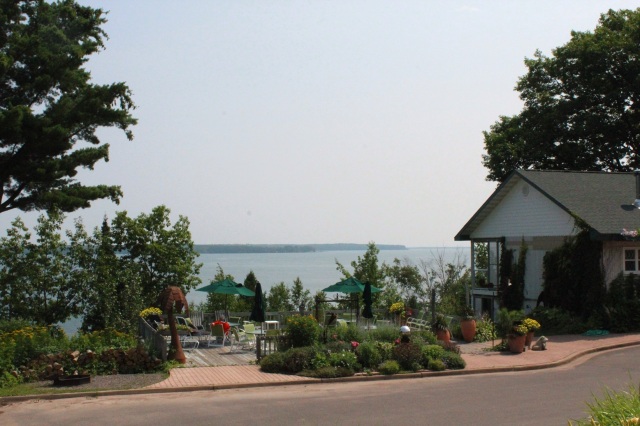 [A friend advised we had to see the Winfield Inn gardens when we got to Bayfield.  So we did.  Neat.]

[Another friend advised we had to eat here.  So we did.  Later.]

[The classic Old Rittenhouse Inn, on Rittenhouse Street (or Avenue?).  We’ll be baaaaack!] 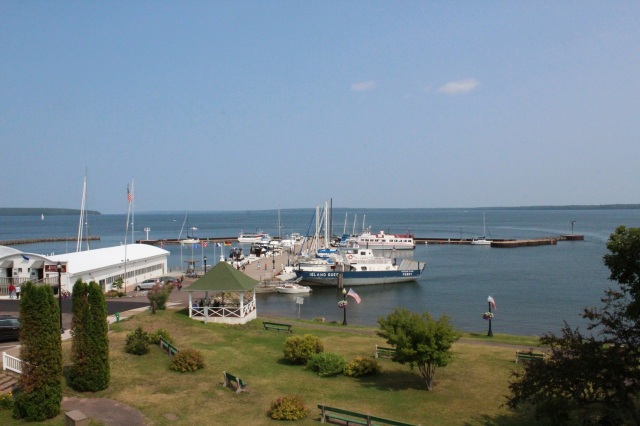 [Had lunch overlooking the lake.]

[There goes the Madeline Island ferry.  It’s the biggest Apostle Island but the only one that’s not part of the Apostle Islands National Lakeshore.  It was too inhabited to nationalize.]

[Tomorrow morning we take an Apostle Island cruise.  This may be our boat?] 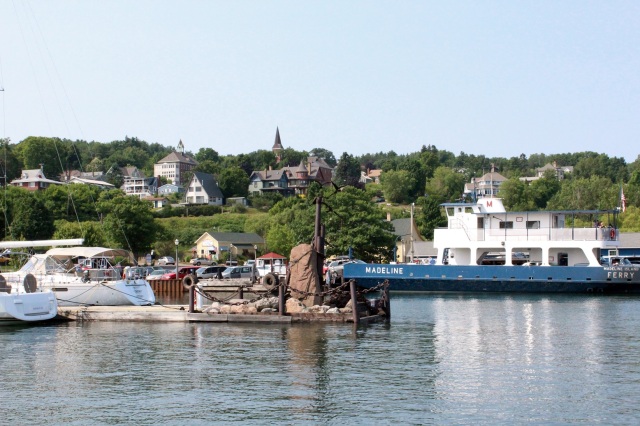 [On the pier, looking back at Bayfield.] 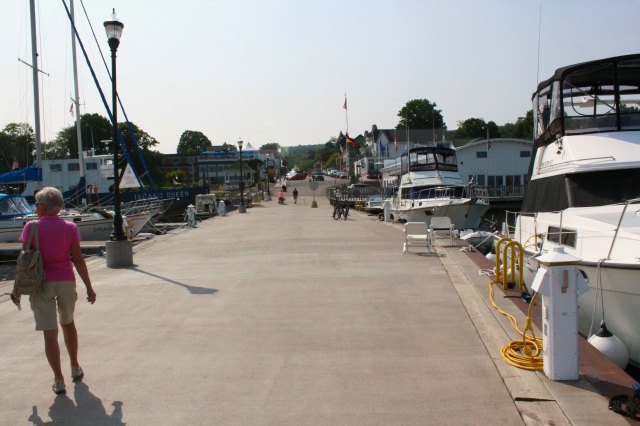 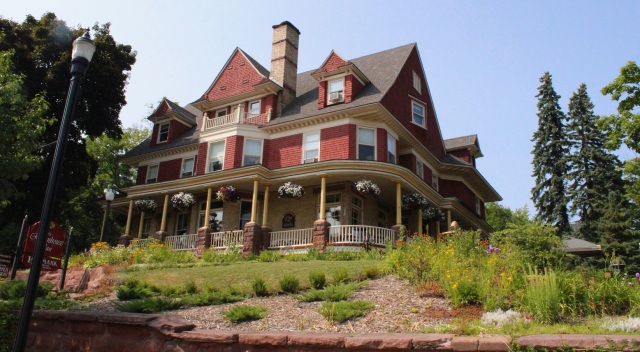 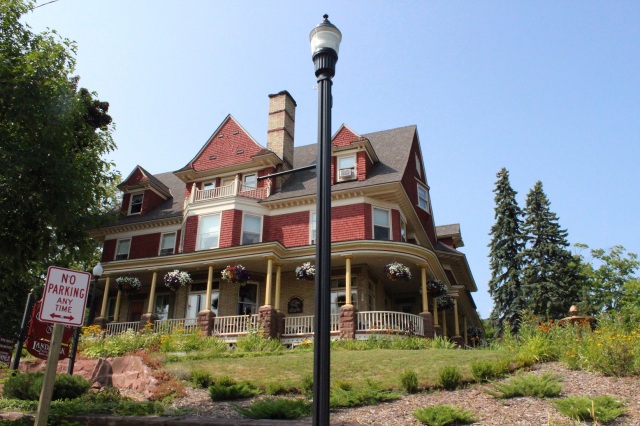 [Check into our B&B.  Run by a couple from So. St. Paul.  Talked about schools and girls hockey.  🙂   They dealt with 156 inches of snow last winter.  And the ice cave phenomenon.  The area experienced an onslaught of 120,000 visitors over the 6 ice cave weekends – about the same amount as they receive over the whole summer season.  They said the onslaught was created by it going viral on social media – that the winter ice caves aren’t really that unusual.] 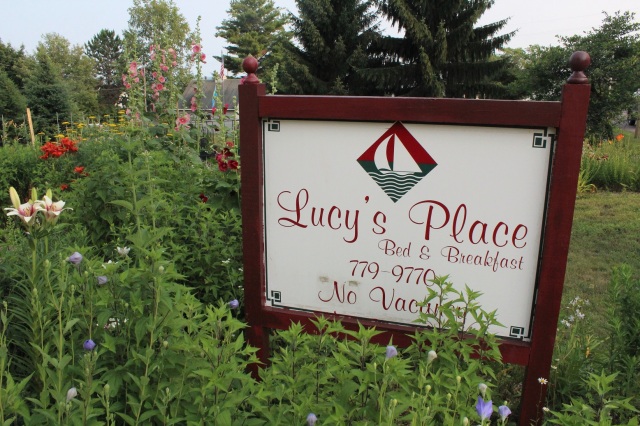 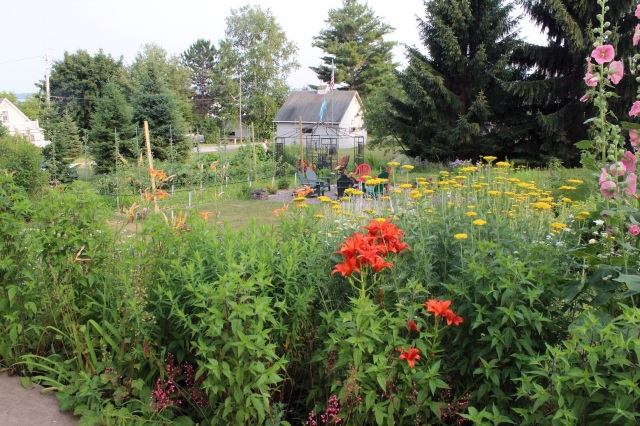 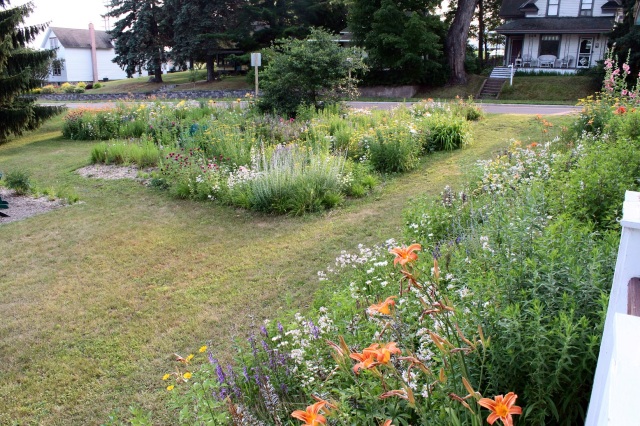 [Our hosts both work full-time jobs, run the B&B, and somehow do flower and vegetable gardens?] 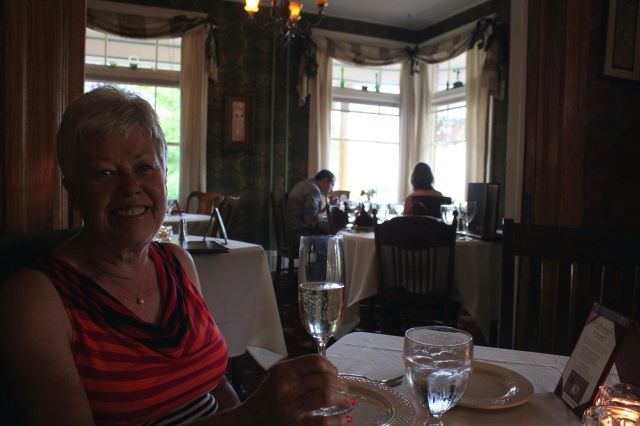 [Shooting from the stained glass window. The super tried to get a room reservation here a month before we left, but they were all booked.] 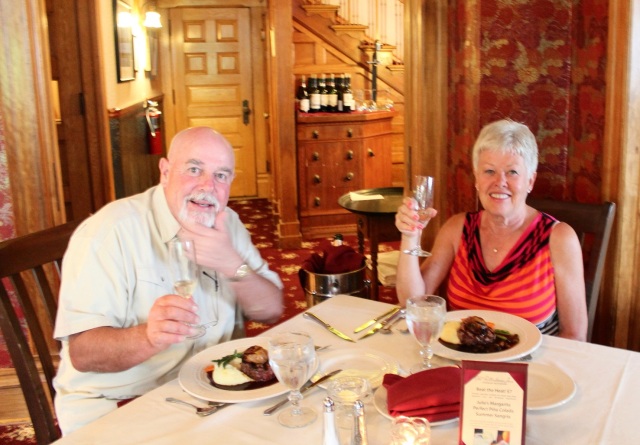 [Filet mignon and mashed potatoes and champagne.  Pretty far up on the “yummy scale.”] 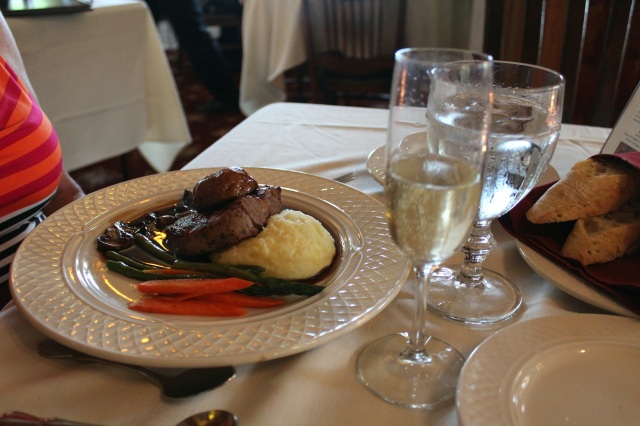 [There was a young couple sitting behind us, regulars because they knew the server.  He said he had just visited this $500/bottle winery in California and the owner told him about a $30/bottle of chardonnay that he thought was the equivalent of a $200/bottle.  I turned, excused myself, and asked it he would repeat the name of that wine.  He did.  I forgot it.  Arrgghhhhhhh!]

[If anyone from the Rittenhouse Inn should ever happen to read this, please send a comment with the name of that California chardonnay!  😉  ]

The Leader of the Pack

in my fantasy I am the leader of a gang of bikers.

except that we are all middle-aged, have bad backs, and ride exercycles in formation.