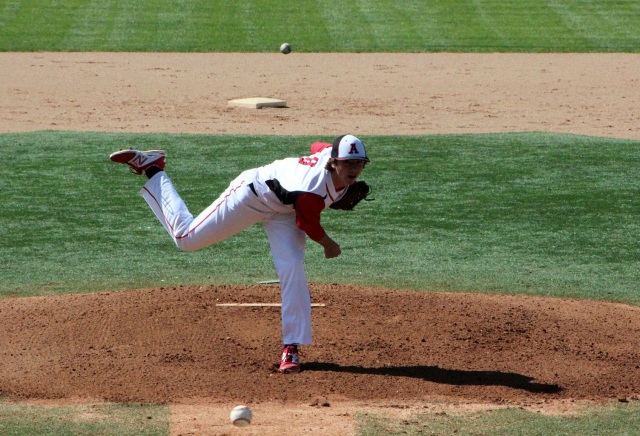 [There are two baseballs in this photo.  After consultation with the finest scientific minds on the planet, we have an explanation . . .]

The day was Wednesday, May 21.  [Yeah, I hear ya.  That was five days ago!  Well, nice weather and Ole Oppe Fest intervened, and I (and the supervisor) decided I should spend time outdoors.]  This was the last regular season baseball game but the first at which I deigned to make an appearance (until now attendance at such events had been rendered unlikely thanks to Mother Nature).  And it was a battle for the regular season conference championship – our Cards had only one conference loss and the Brainerd Warriors had only two (though they were they higher rated team in the section).  The previous day had been lovely (I meandered through 18 holes of golf for only the second time this season), and the forecast, surprisingly, was for more of the same.  Yet because we were still suffering through our spring of discontent (after our winter of discontent), the morning of game day dawned gray and ominous (i.e., normal) with the occasional spritz.  Then magically, at 3:00, one hour before game time, it broke, and we had a perfect day for baseball! 🙂  It had been a long time since this blog had “reported” a sporting event . . . the boys’ state basketball tournament?  So, the blog decided it best to send a seasoned pro, “Mr. Basketball” [see insert], to cover this game. 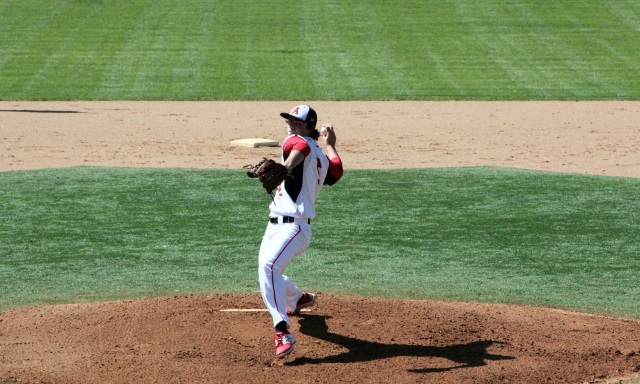 [Junior pitcher Dan Kuhn was on the mound for the Cardinals.  This is just a guess, but possibly his major claim to fame until this day was that his mom, Beth, took the photo of the now internationally-renowned Fat Boys Walking Club.]

[Meanwhile, back to the photo at the top of this missive.  The mystery of the two baseballs was such that I submitted it to professional photographers and scientists thinking it may have something to do with light refraction, or global climate change.  If I had bothered to check the photo sequence (see below) I should have recognized what was subsequently pointed out by occasional blog contributor, Al Grundei, that this was a warm-up pitch and the 2nd ball had to be one thrown by the 3rd baseman or shortstop to first.  Mystery solved . . . but still a cool picture!  🙂 ] 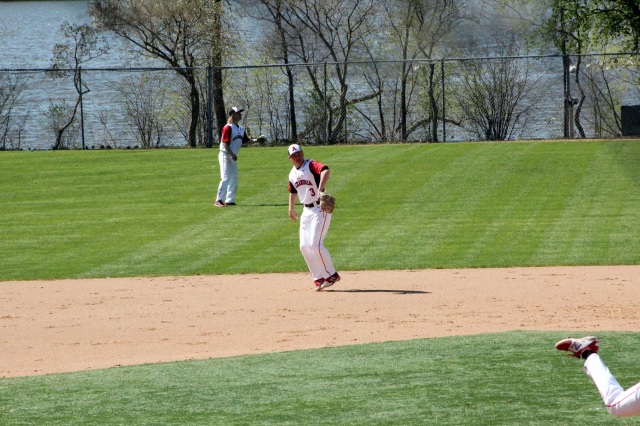 [And this is senior shortstop Zach Peterson, a likely candidate for the thrower of the second ball in the opening photo.]

[Oh, you’re probably wondering about the game?  Diehard fans advised that Brainerd came in averaging 8 – 10 runs a game (?).  Dan did a good job limiting the Warriors to two runs in his five innings of pitching.  The problem was the Cards didn’t even have a hit going into the bottom of the 5th.  The Warrior pitcher didn’t appear to have great stuff . . . but what do I know?  I haven’t seen enough games to recognize stuff . . . except I know we have too much of it in the garage.  But the Cards were unfortunate in that we hit a lot of “at ’em” balls . . .] 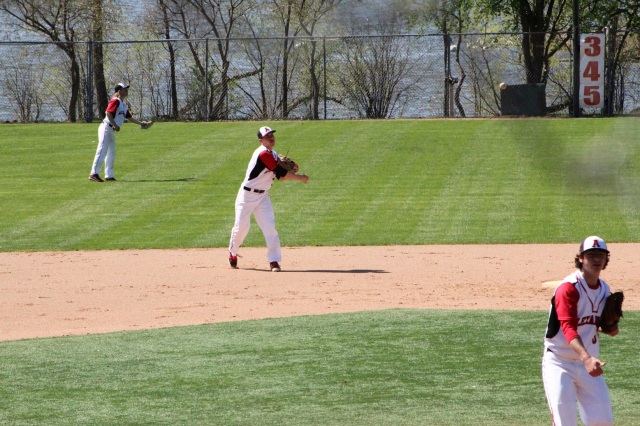 [In the bottom of the 5th we finally got a couple of hits, and with guys on 2nd and 3rd junior 2nd baseman and lead-off hitter, Grant Toivonen, singled to drive them both in to tie the game at 2.  He then stole 2nd to get in scoring position for the go ahead run, but it was not to be . . . ]

[I stayed long enough to see staff ace, senior Blake Stockert, come in and pitch a strong 1-2-3 top of the 6th.  Then because the excitement never ends in Vacationland USA, I had to leave for a previously scheduled next event.  I subsequently heard that with two outs and a runner on 1st in the top of the 7th, a Brainerd batter hit an infield fly that Card fielders apparently lost in the high sky and when the dust settled the Warriors had runners on 2nd and 3rd who were promptly singled home for a 4 – 2 win.  The teams tied for the conference title, the 2nd Cardinal tied-title in a row, so a big congrats to them!] 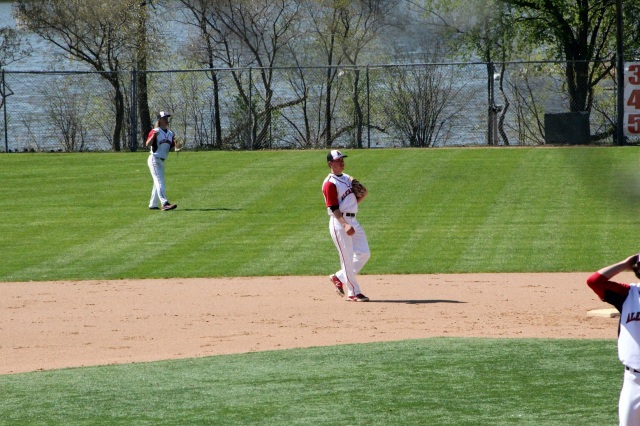 [The left-fielder in the photos is senior Parker Bowden.  The fans in the leftfield bleachers, a/k/a, the lake, are white pelicans.] 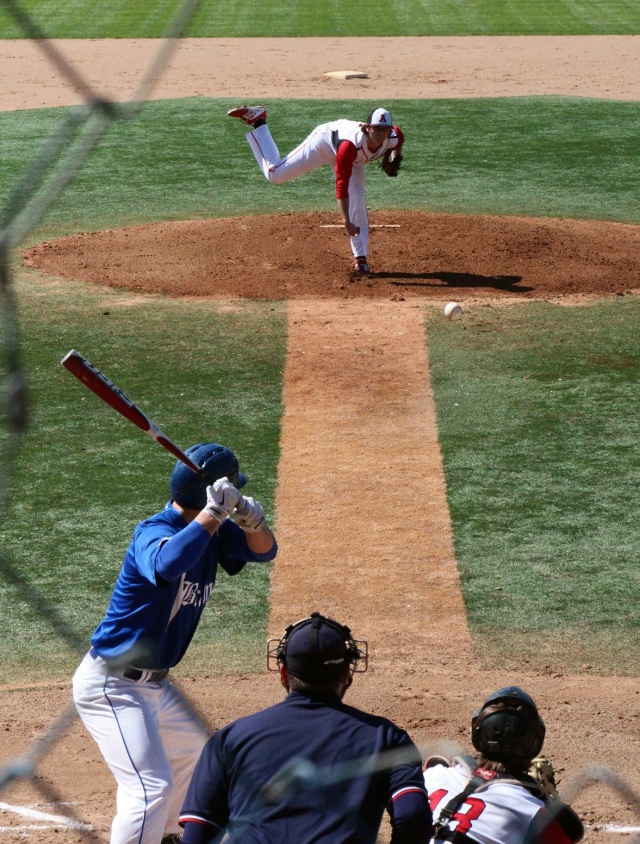 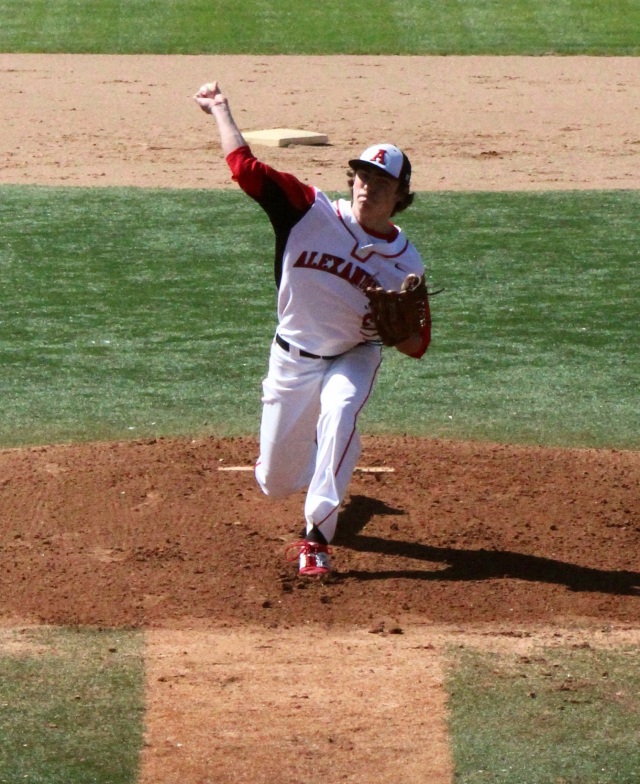 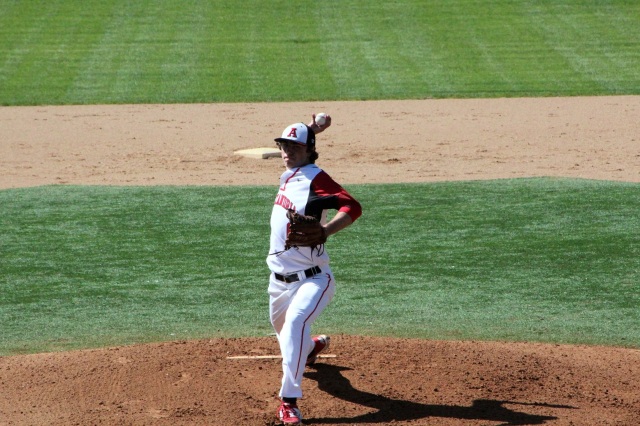 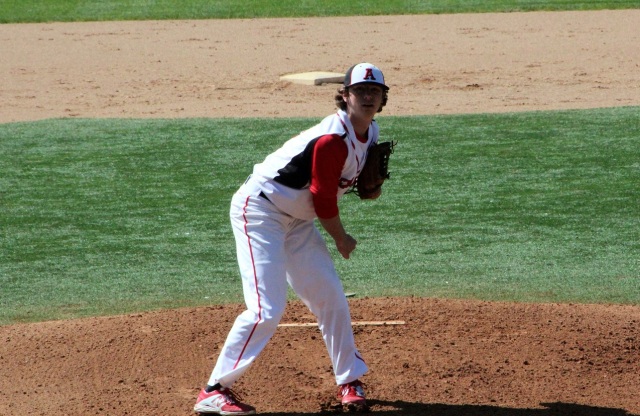 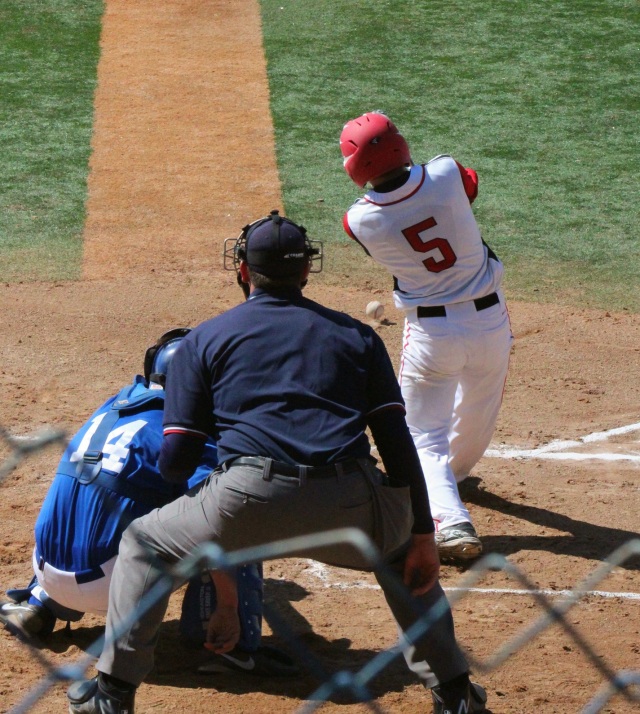 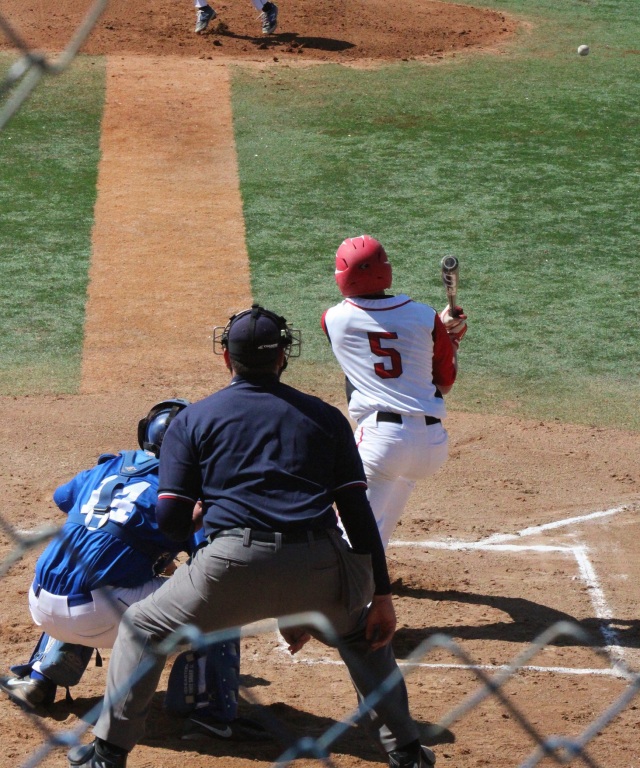 [This is Mr. Toivonen leading off.  I was impressed though it was lefty on lefty, he made solid contact every time he swing the bat in this game.  The hole in the fence behind home plate was obviously designed for photographic purposes.  But it has been enlarged significantly (?) since last I was here so I was hesitant to get all the way into it once the action began.] 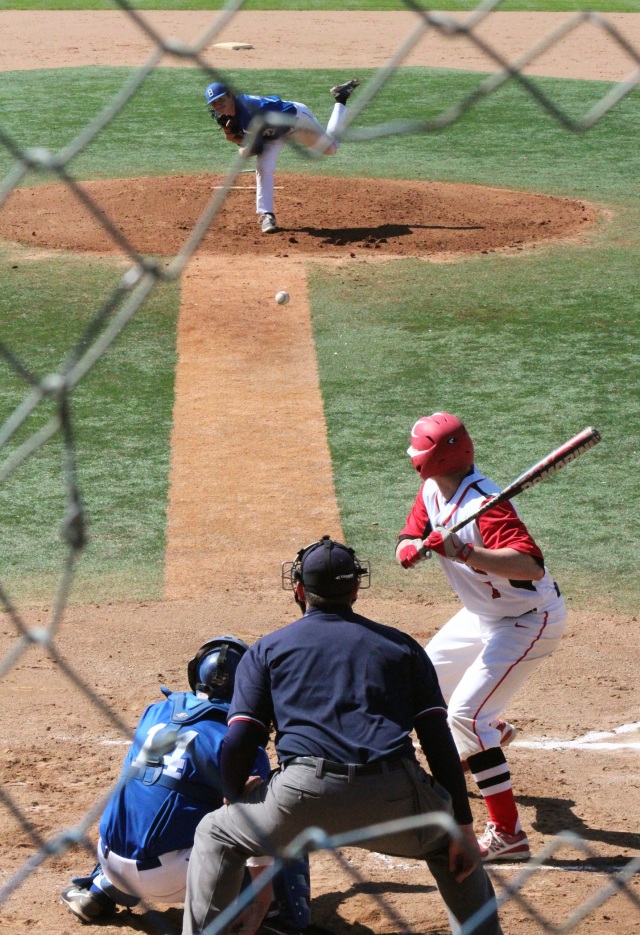 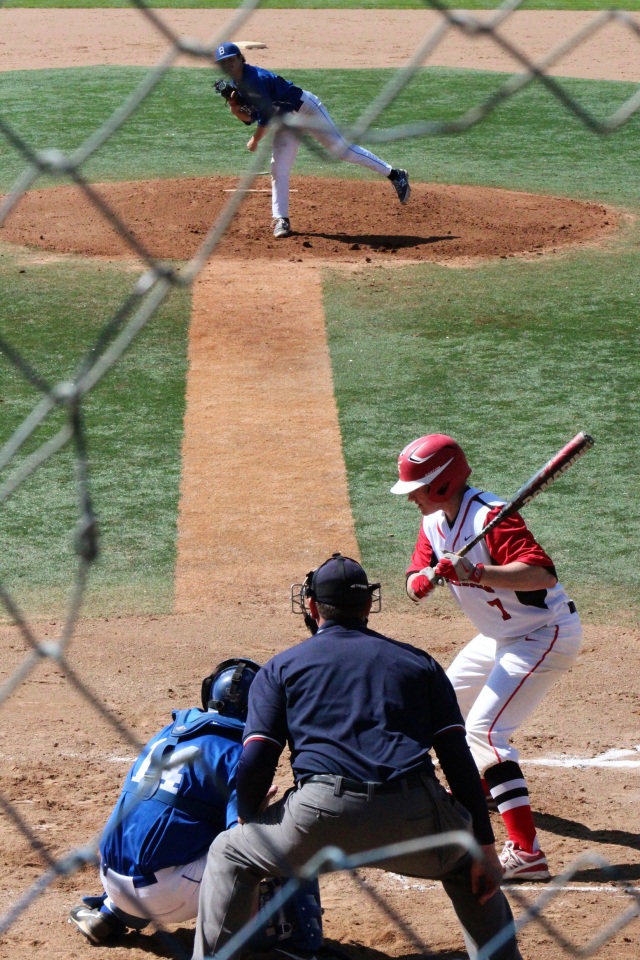 [Taking it the opposite way.] 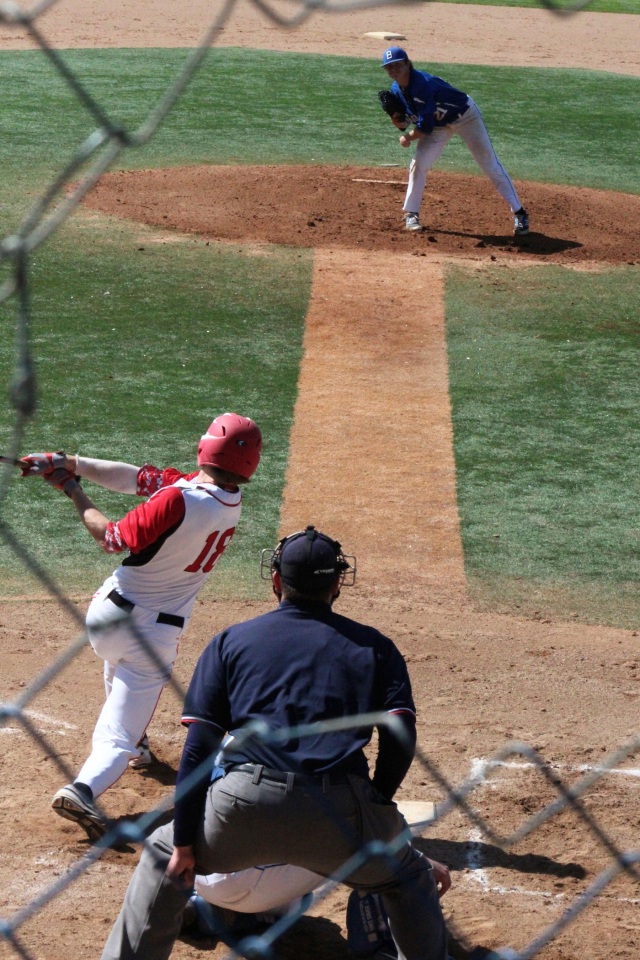 [Senior Mitch Thompson, centerfield (as in “put me in coach”)] 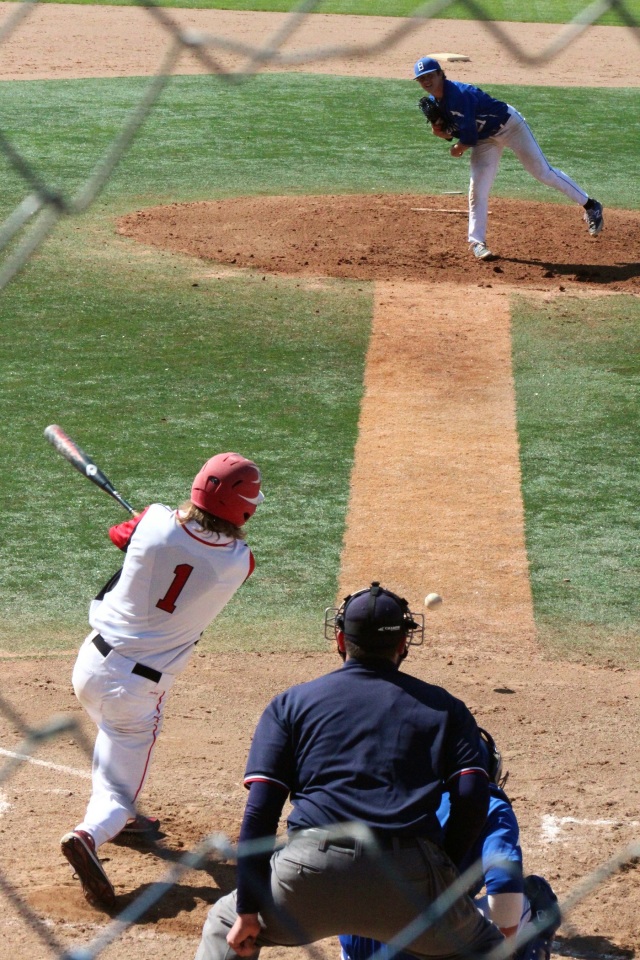 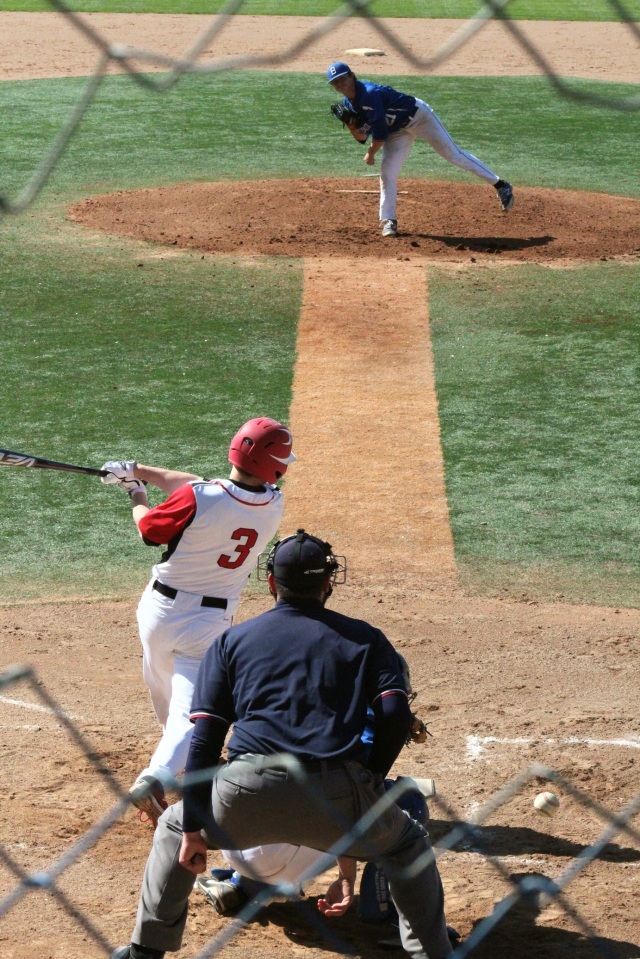 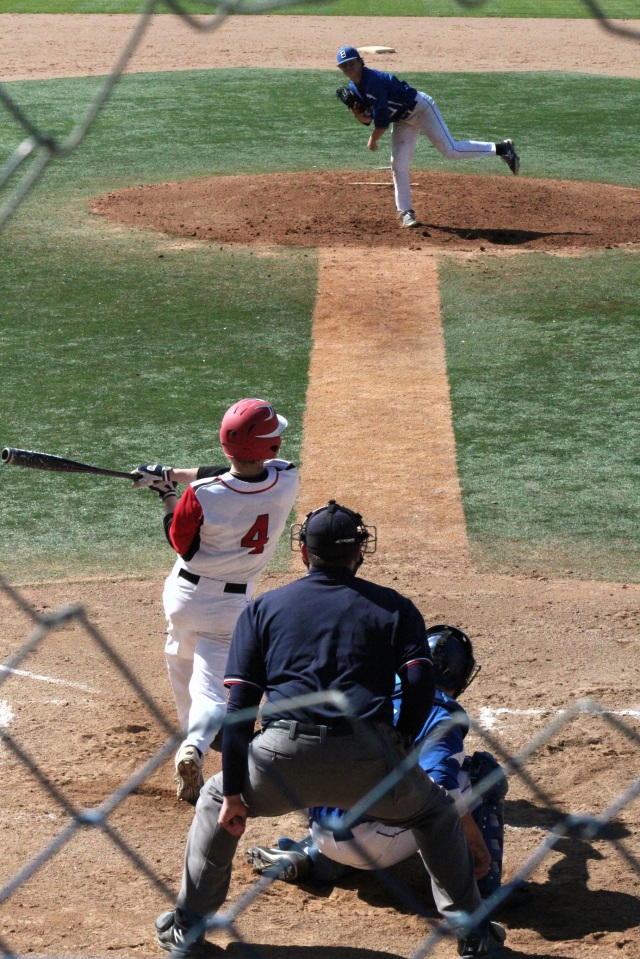 [Junior catcher Casey Hammerback . . . picked a runner off 2nd in the game.] 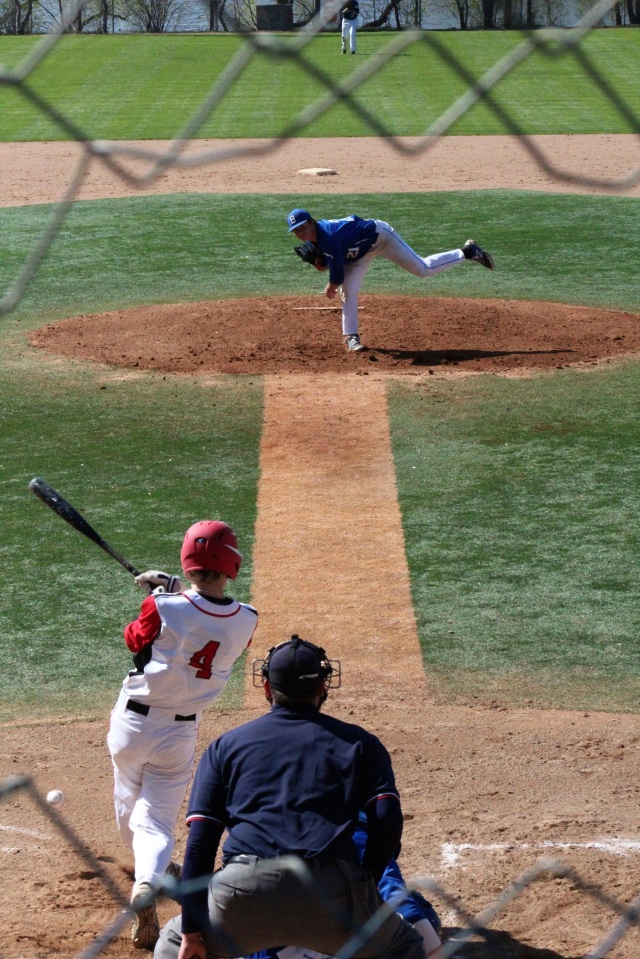 [A power pitcher, in this half inning he had better control of his hard curveball than of his fastball.]

Throughout history, women have picked providers for males.  Males pick anything.  ~ Margaret Meade