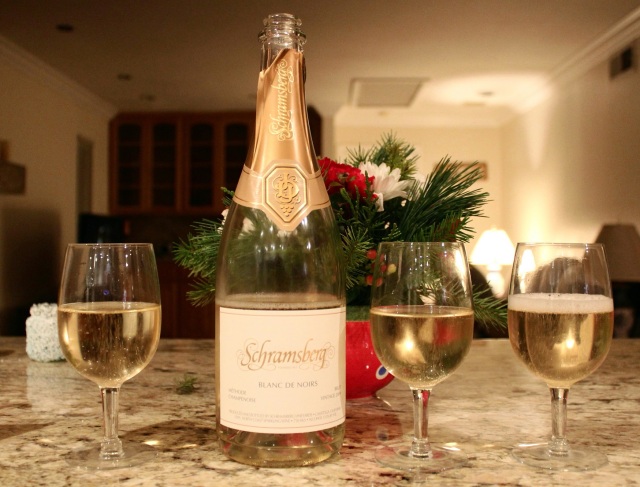 [I sacked in on New Year’s Eve.  It was Rita’s birthday in San Marcos.  Undoubtedly it would be party, party, party all day long.  And we were still recovering from the long flight from Indianapolis.] 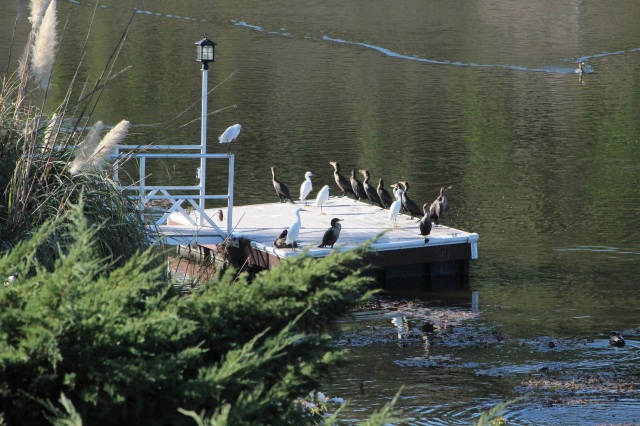 [Local creatures were up and about next door on Lake San Marcos.  It appears to be a fine selection of cormorants, mallards, egrets, herons, and coots (in the water).  California has always been noted for its diversity.] 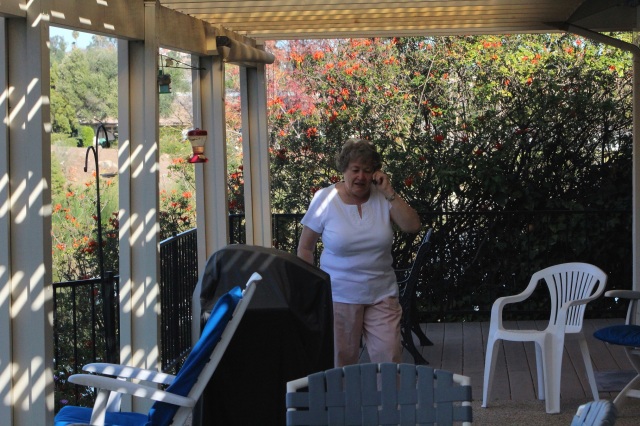 [The birthday girl was up and about on her deck porch.   Hello, Charles Schwab?  My sister and brother-on-law are here, and they expect to be ferried all over Southern California the next two weeks.  I just want to make sure my investments can cover that? ] 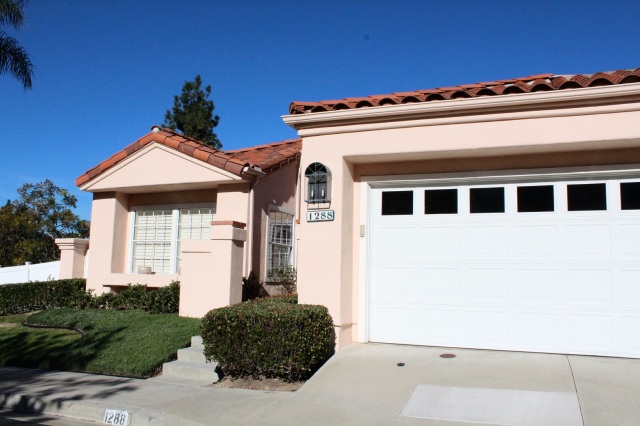 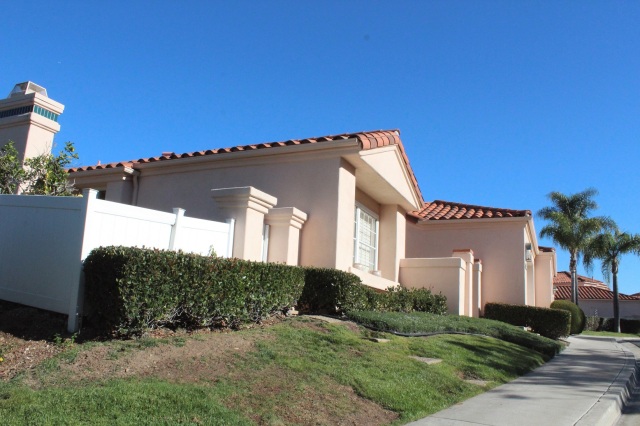 [Which just happened to be on the other side of Lake San Marcos from where we were.  Regular readers of the blog are aware that Dangerous Dan is one of the lead character actors of this venue.]

[Recent photo of Dangerous Dan with the supervisor.]

[Which are known far and wide through out the area.]

[But ultimately, of course, California is about going to the beach . . .]

[So here are The Biddies at what we later learned was South Carlsbad State Park, a/k/a Ponto Beach, which was about 12 miles straight west from where we were in San Marcos.] 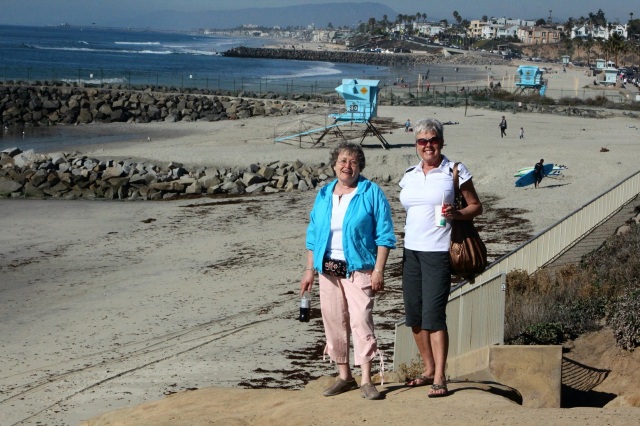 [Did we get a tan since the previous photo?]

[Well, if we’re not tan yet, we’re going to the tanning booth!] 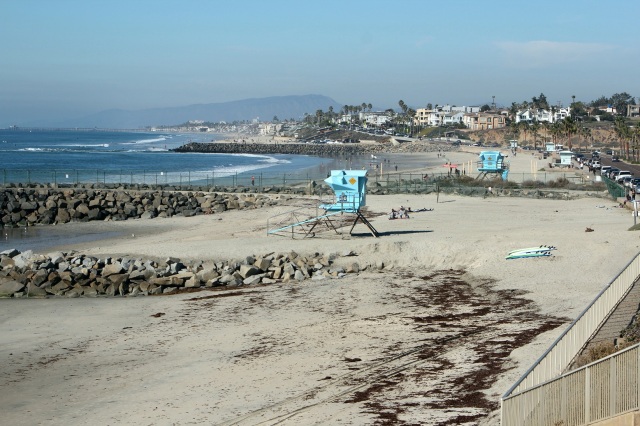 [Is that a tanning booth?]

[A beach flower – purple, I believe.]

[A body of water comparable to the chain of lakes.]

[Either a beach rock formation . . . or a Henry Moore sculpture?]

[Give me back our Moby Obie and we’ll show these guys how to really surf!  As a diplomaed geographer, it behooves me to point out that surfers in California wear wet suits because that water is cold.  The California current flows down from the north bringing the cooler water with it.  And that’s why Southern California is also known for its marine layer, a usually morning fog as a result of the cool air over the water meeting the warmer air of the land.  I’m sure you already knew that . . . but just in case.]

[Another cluster of Happy Birthday wishes!  Watch that cliff, Rita!] 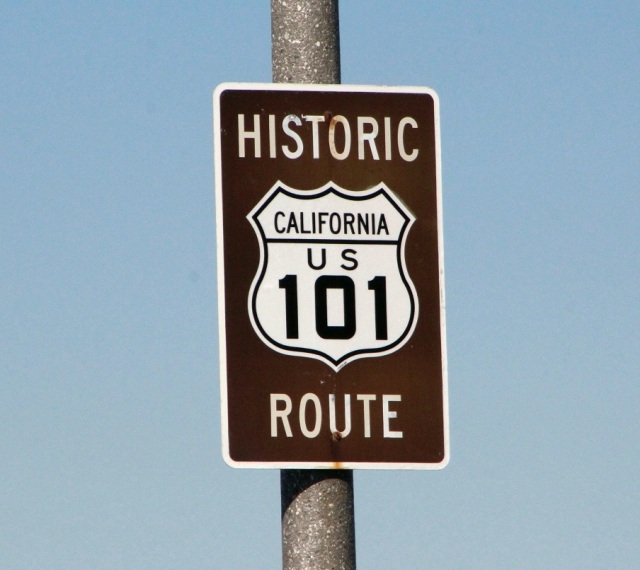 [Not wanting to over do sun exposure that first day, here we are crossing the Lake San Marcos bride on the way back to our “home” on the east side.]

[A low flying egret over the lake.  At that altitude, the FAA generally requires flashing lights.]

[It turns out part of Rita’s rental contract included catering to other house “guests.”] 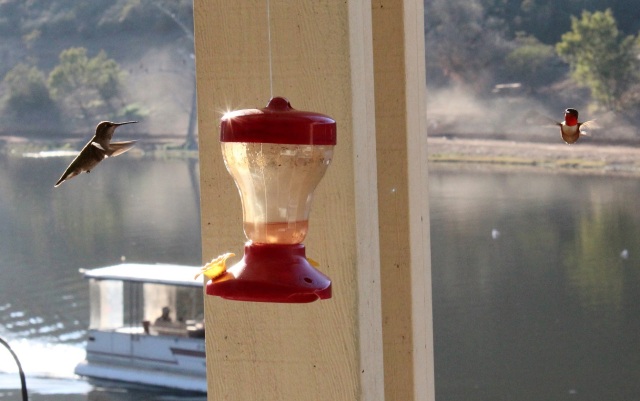 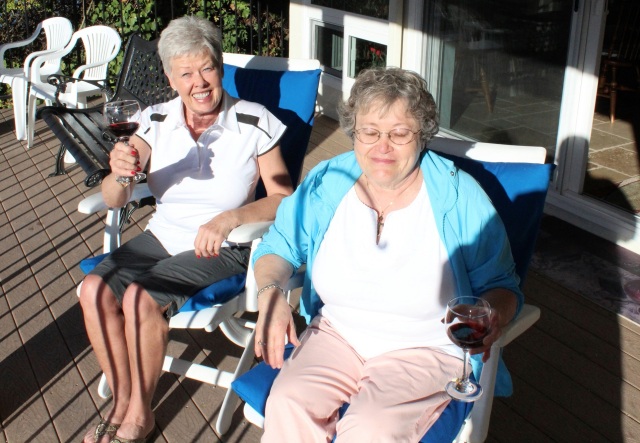 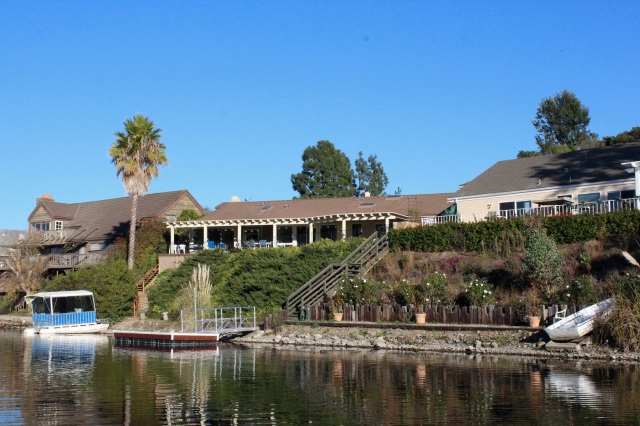 [Obviously, we’re on a pontoon ride around the lake, courtesy of Rita’s landlord.  🙂  ]

[Ornamental grass (?) in the wild, likely a gift from some birds.]

[The dam at the end of the man-made lake.]

[It’s a 40-foot drop on the other side.  Damn!  Lotsa houses on hillsides where they occasionally come down the hill in a mudslide.]

[The Biddies and Beth as we’ve turned around heading for home.  As you’ve noticed, it’s not a big lake but it is still wild at this end.] 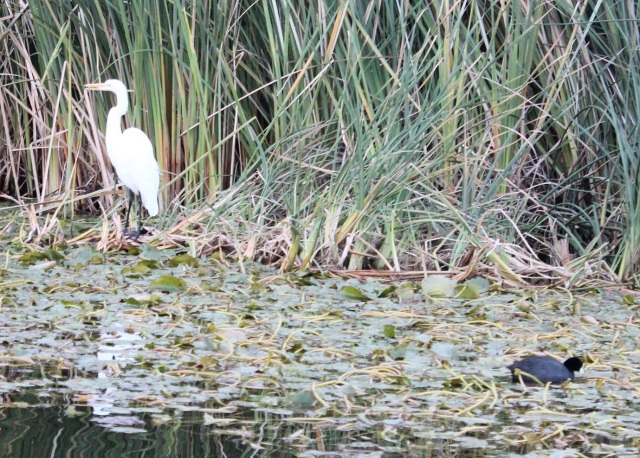 [Egret and coot (not to be confused with the 4 coots on the pontoon.]

[The contrail provided at no extra cost.] 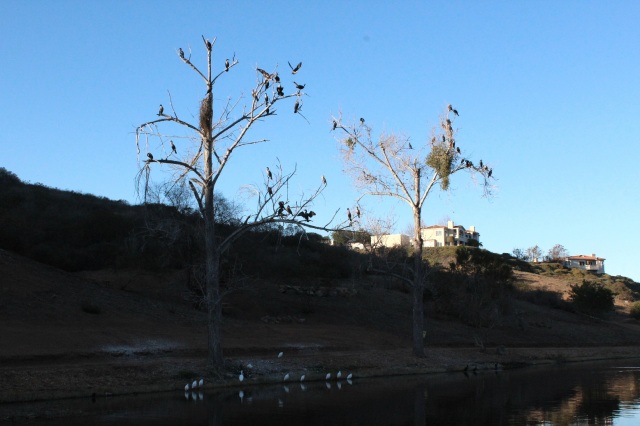 [I guess this is their bedroom?] 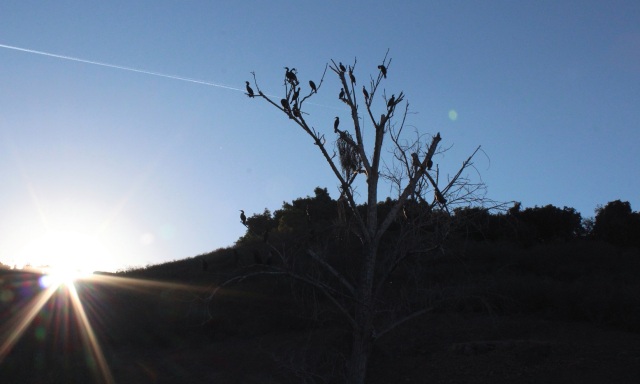 [Have a good evening you solid-boned diving ducks.]

[Back to the house.]

[James, the landlord from Joisey, at the helm.]

[Ahead on the left is the resort complex, under renovation.  And on the right is the bridge we crossed a few photos back.] 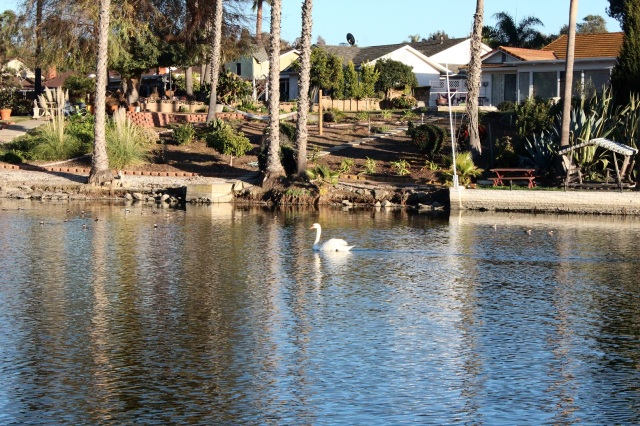 [A white swan, who has friends, who calls the lake home.] 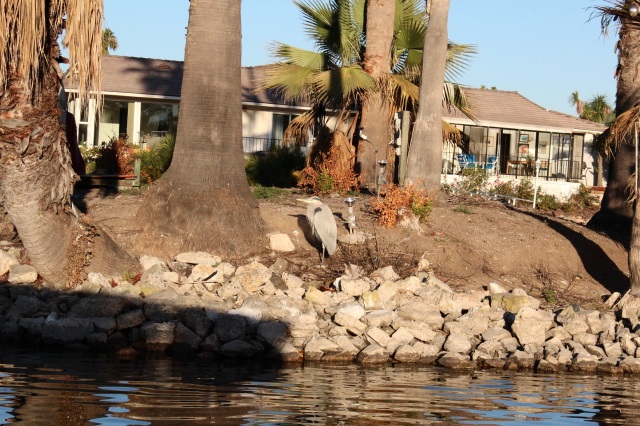 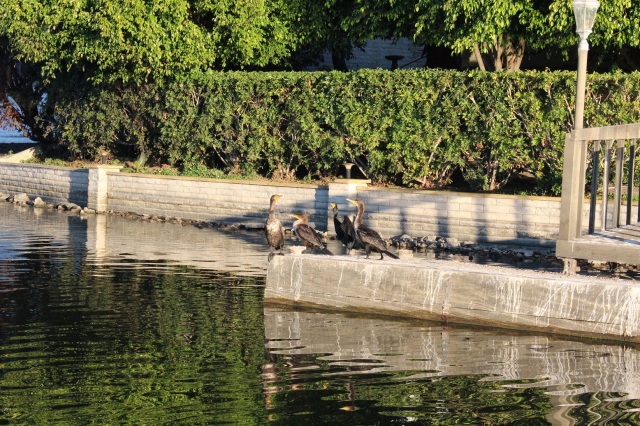 [Cormorants drying in the sun.]

[One is stretching its wings to dry.] 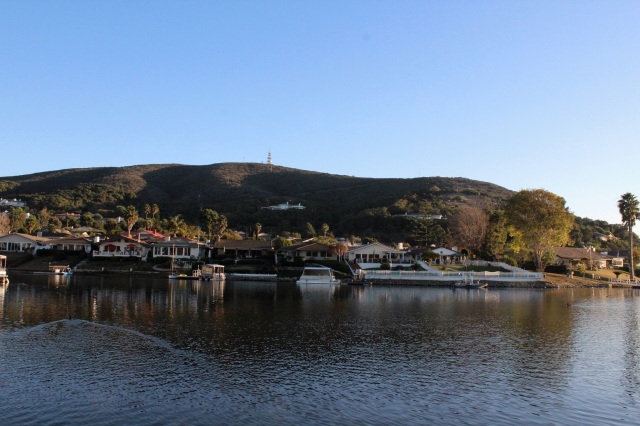 [We will later go up to the “mountain tops” overlooking the lake . . . and the ocean.]

[The lake has 4 black swans, who are fed of course by the locals.] 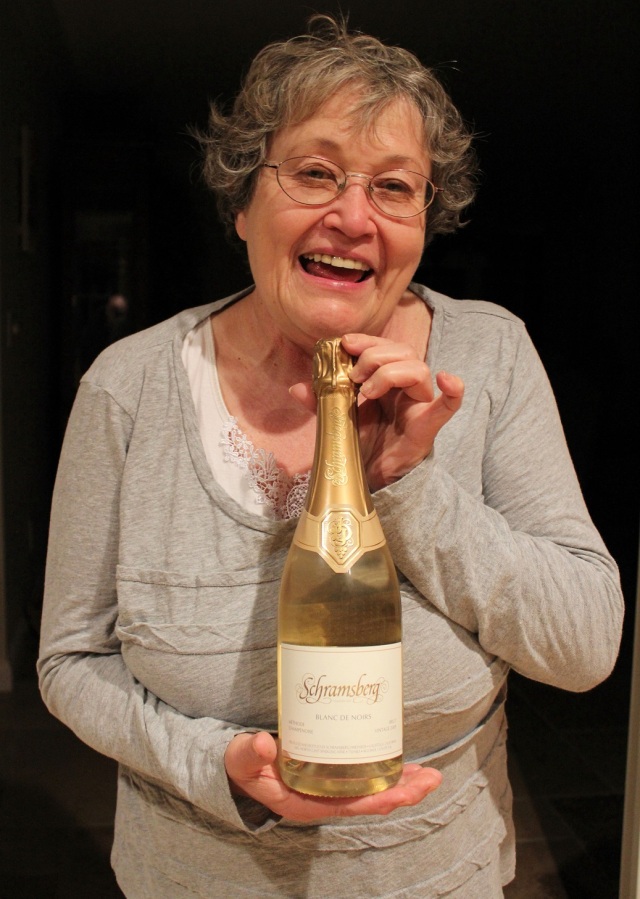 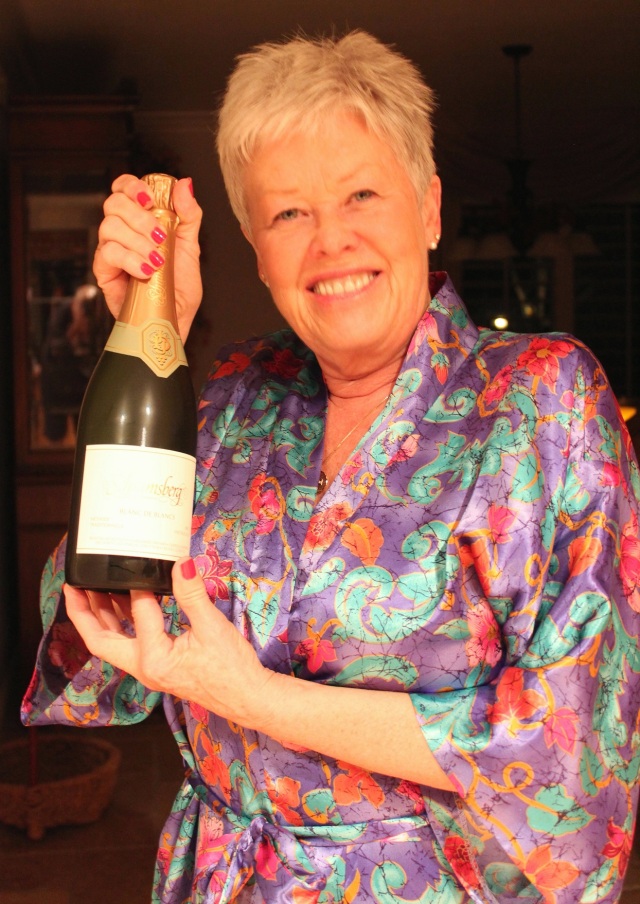 [Many thanks again, Rita!  We had a great time!  And remember now when you’re out driving around with Scott and Vicki, be sure to keep an eye out for those big ass trucks!  😉   ]

Up next:  Lots more California, and a girls’ basketball game is in the queue.

1 Response to California Dreamin’ I