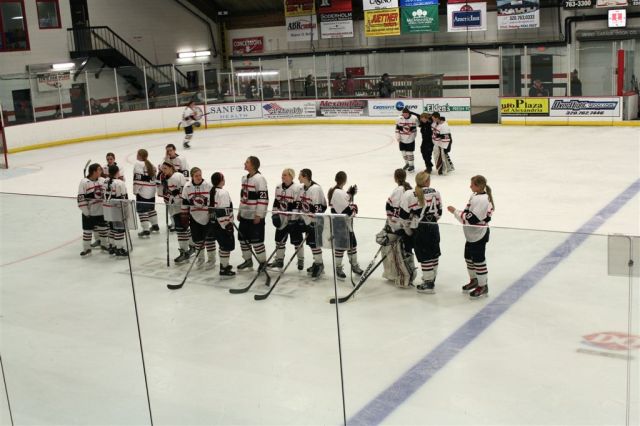 [If I can get this one done, I’m pretty much caught up!  🙂  This was parents’ night, last Saturday afternoon . . . so, technically, I guess it was parents’ afternoon.  Anyway, we were playing a Cities team, as we often do on weekends this time of year, another class AA opponent.  Remember when Rogers was just a dusty little town on the way from here to the Cities – now all the exurbs have gotten big:  Buffalo, Big Lake, Delano, Monticello, et al.]

We pause momentarily for a brief insertion:  We arrived at the RCC for the beginning of a long day – the Salty Dogs at the winery after hockey and then an evening with Lisa Lynn at SAWA (previously covered herein).  We arrived in time for the last period of the JV game and were delighted to see the Cards were holding a 1 – 0 lead.  But when the teams came back on the ice, the Cards looked a little light.  After putting six skaters on the ice, we only had three on the bench?  We asked the hockey parents, “Huh?”  The response was illness and injury – they said Onna had been hurt in the game, appeared to have been an ACL for which she was getting an MRI on Monday.  We hope she’s OK!  Anyway, you could tell we were getting pooped.  I don’t know how we were doing line changes – one-for-one?  The 3rd period was spent mostly in our zone and our best play was to ice the puck – and why not, we were in our own end anyway and it gave us a brief rest.  Late in the period, I believe it was Jade Bollman (22), a freshman forward, who broke out and fired a beautiful shot into the far upper corner for a 2 – 0.  That would be the final score as Bailey pitched a shut out in goal. 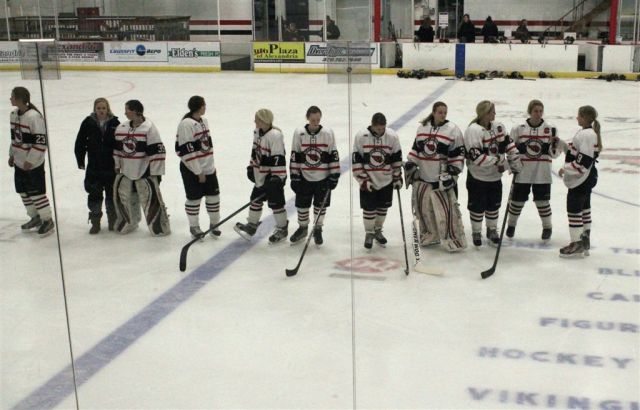 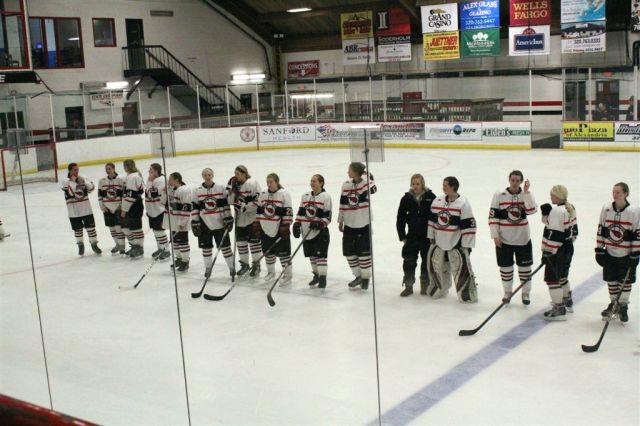 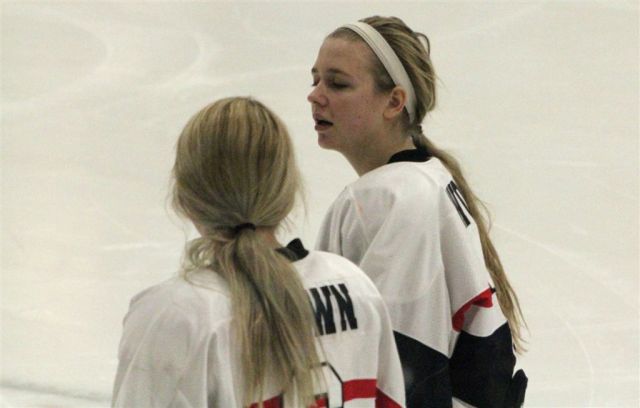 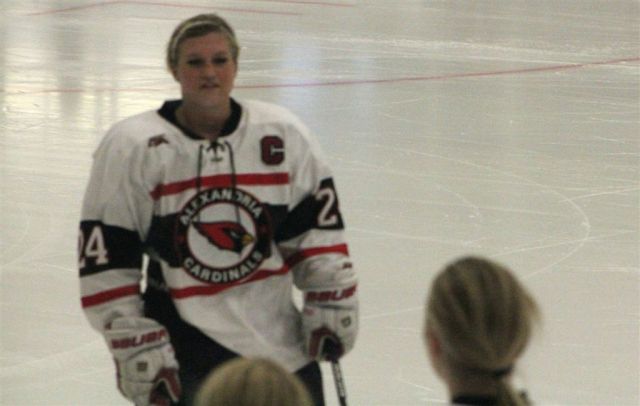 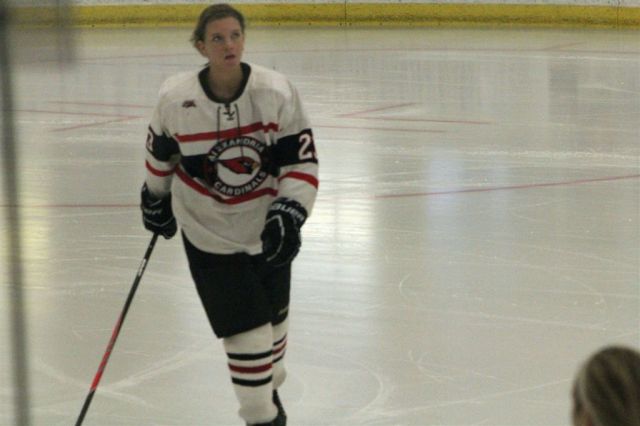 [And we’re off with Mari and Karina in the Royals’ zone.]

[Karina fires from the point.] 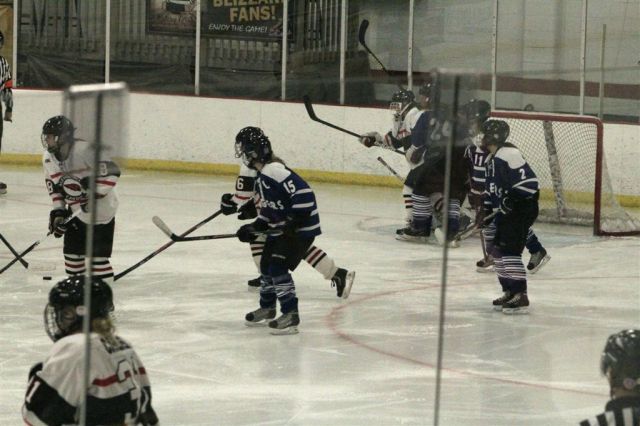 [A traffic jam around the Royals’ goal.]

[Rachel (4) and Hanah fight for position.] 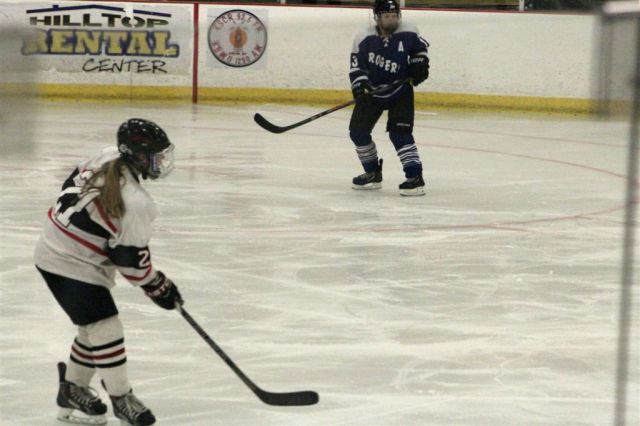 [Spoiler alert:  The Royals scored two goals early, then Mel scored to make the score 1- 2 after the 1st period.  The 2nd period was scoreless.  In the 3rd, Sam (37) scored early to tie the game . . . then Mel got her 2nd goal (as she always does) to give the Cards a 3 – 2 lead (overcoming that early 2 – 0 deficit).  Before the game, I saw Mel’s mom ands told her we expected two goals from Mel in the game!  🙂  However, in the 1st period she had two penalties, not two goals – I tried to find her mom to correct an obvious misunderstanding!  Ha!  Which brings us to the previously covered (though after this game) high school Christmas concert.  When we arrived at the concert, Mel was lugging in a stand-up bass that appeared to be larger than she is!  And I thought, is this young musician the same player I saw the day before delivery two body checks (though unintentionally, of course) that would have sent Adrian Peterson into the 3rd row?]

[This may have been one of Mel’s penalties?]

[But the Royals come away with it – Taylor pursues, Little Rev (29) back pedals.] 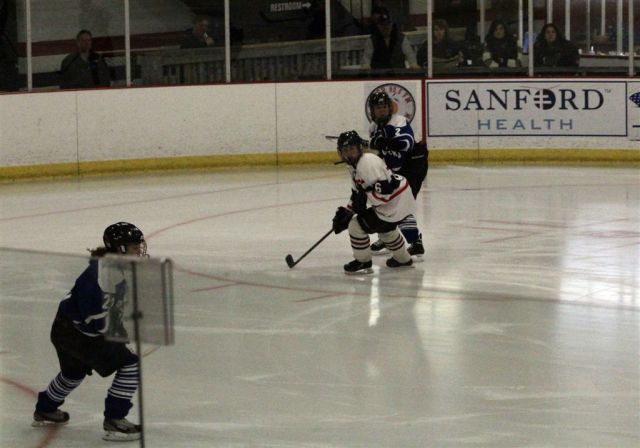 [And now we’re in the 2nd period (I must have had a nap) with Mel again.  We went with two lines most of the time (tight, even game), so she got a lot of ice time.] 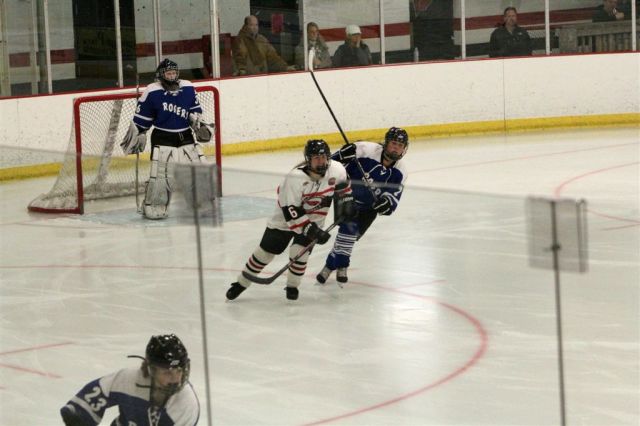 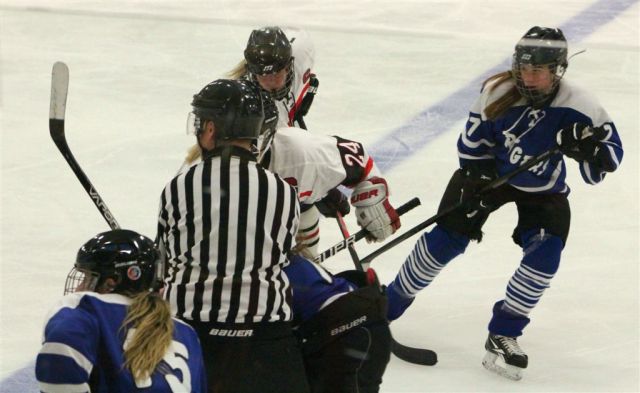 [And now we appear to be in the 3rd.  Taylor and opponents rough up the ref?]

[Gotta admire the folks in stripes, sometimes they take a beating.] 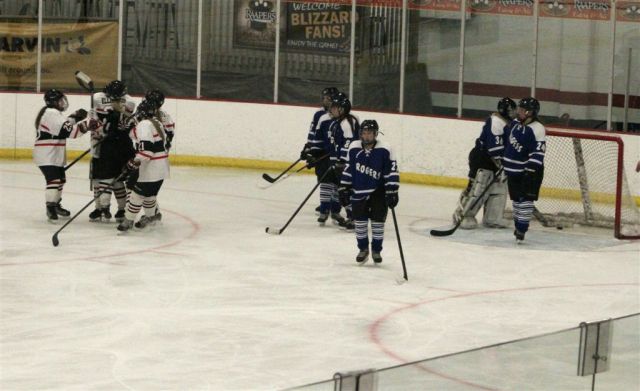 [And we’re celebrating either Sam’s goal or Mel’s goal?]

[The goal scorer always seems to be on the far side of the hugging pile?]

[The Royals tied the score with about 11 minutes left in the game on a rather soft long shot that must have deflected somewhere along the way.  The remainder of the 3rd, and all of the overtime, featured some terrific hockey by both teams.]

[The Cards had several good chances.] 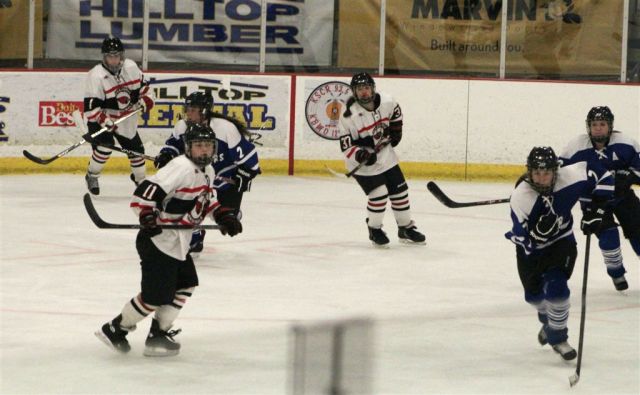 [Ooops, there goes the puck over there.]

[Little Rev taking a face-off?  I didn’t recall that till I looked at the photos!  🙂  ] 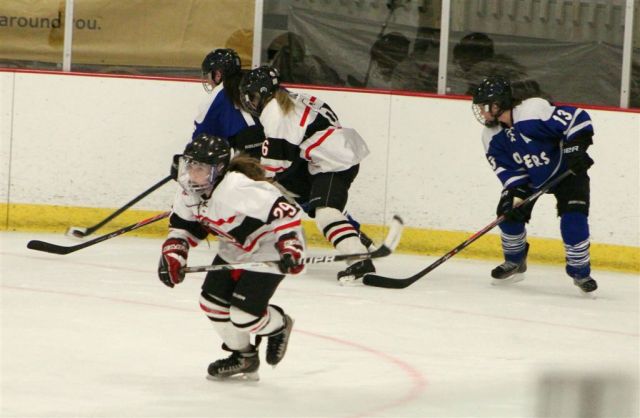 [The last shot of the action.  I remember Mari in particular stick handled her way through the defenders a couple of time but couldn’t quite finish it off.  😦  ]

Up next:  Maybe our first look at girls’ basketball?