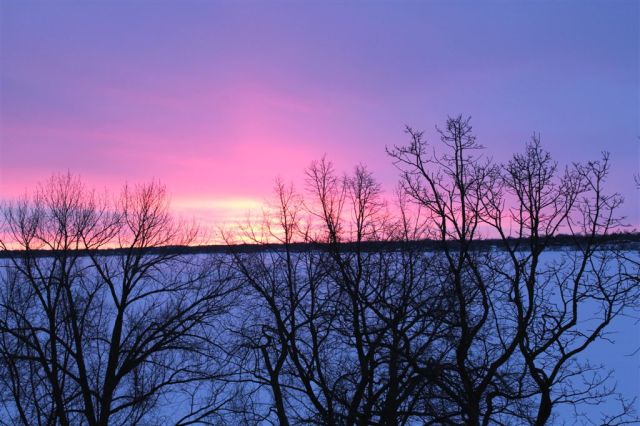 [Red sky at morning, sailor take warning.  This is this morning, Sunday, April 14.  We are under yet another winter storm warning.  Snow is predicted for the next four days.  Next Saturday we are still going to have a temperature of 19.]

Maybe I’ll make another one of these today:

Last Sunday The Abbey Road Band from Rapid City, South Dakota, did a true to the music performance of The Beatles as part of our Central Lakes Concert Series.  The photos and videos are canned, of course:

[Well, I suppose the poster is self-explanatory.  Thanks to the McCoys for calling us – we would have missed it!]

[They were among the first in a week of music, music, music – in betwixt and between our incorrigible winter weather.  The day before at the winery, Anthony Miltich performed with his sister before an SRO crowd (the largest indoor crowd I have ever seen at the winery – people want to get out and about again!).  Then on Monday, Professor Miltich taught film to the continuing adult education crowd – particularly for those of us who need continuing education!  On Tuesday, Uncle Willie’s Gut Bucket Blues Band had their monthly rehearsal at SAWA, and on Wednesday, The Salty Dogs warmed up, without advance billing, for their weekend performance at the winery.  We were “wintered” out for Finestra at SAWA on Thursday, but then on Friday . . .]

[Julie and Bruce returned from their usual winter of entertaining the snowbirds (OK, probably some locals, too) in that stretch of geography from Sarasota to Ft. Myers.]

[Bruce was delighted to be the subject of my magic lens again!  😉  They were also “delighted” to be back in the Midwest again (they live in Wisconsin) to enjoy the all-day snow we had that day.] 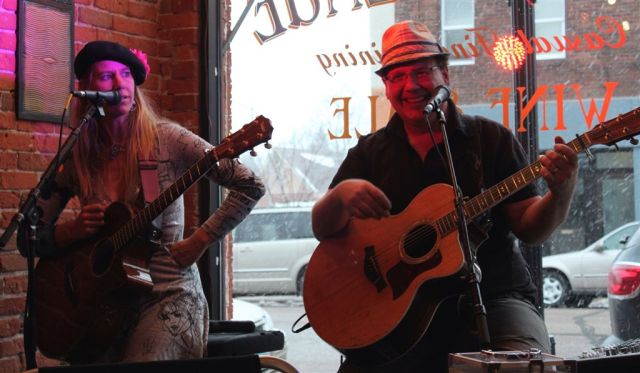 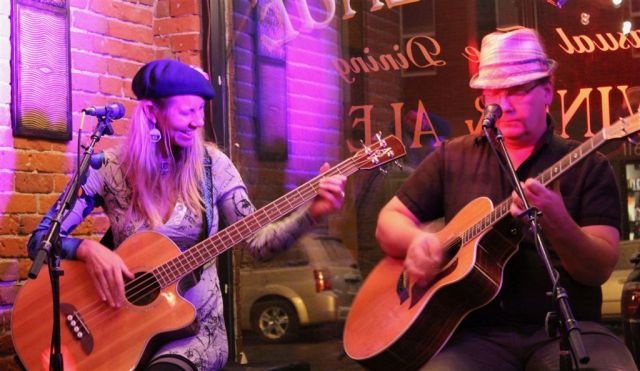 [Oh, in case you don’t recognize them – they’re “Patchouli.”  And we’re glad we made reservations!  As with the winery the preceding Saturday, this was the largest crowd we had ever seen at SAWA – SRO, and all night long people, and groups of people, would arrive at the door, see the crowd inside, and leave.] 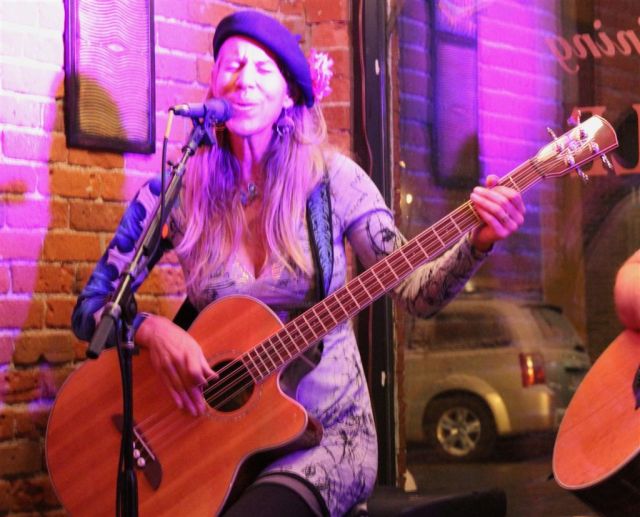 [Bruce dazzles with his hand speed on the guitar.]

[Julie had to get photos of the record crowd for their Facebook page.]

[Julie handed out all manner of noisemakers from her ditty bag for this song.] 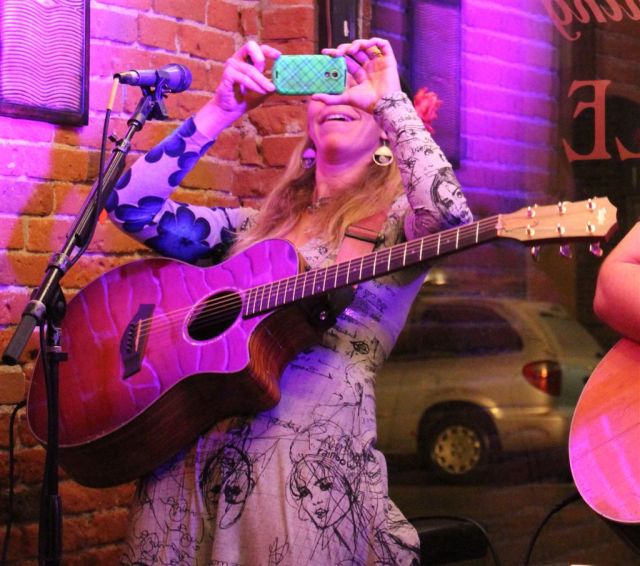 [And now a series of photos of a photo taker – my favorite subject!]

[A little more to the left.]

“Sunshine On My Shoulders” –  http://www.youtube.com/watch?v=fHUslVOnAR8

[Did you know Florida spelled backwards is God’s Waiting Room?] 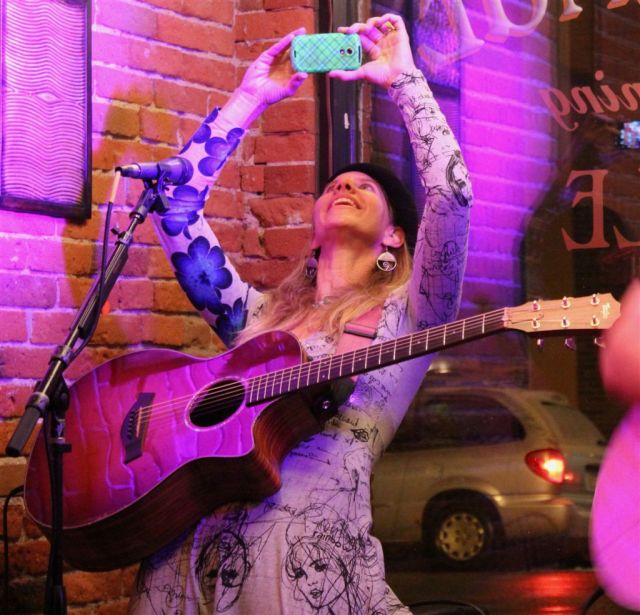 [Tell that guy at table 3 to get his finger out of his nose!] 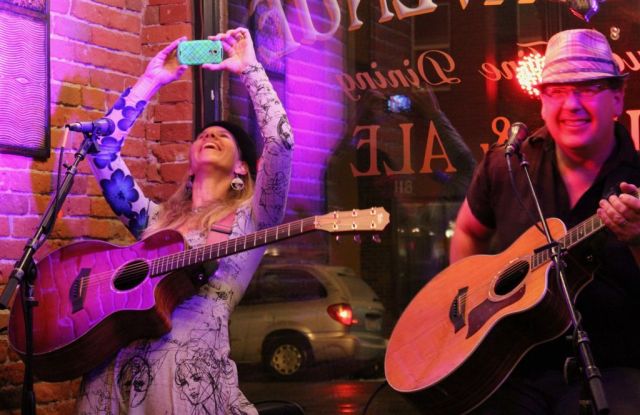 [This is silly fun!]

[Patchouli was the start of three concerts for us in less than 24 hours.  The supervisor needed a break.  Because of my journalistic responsibilities, I was tasked to cover The Salty Dogs at the winery on Saturday all by myself.  The supervisor stayed home to have all the fun – changing out the innards on a couple of toilet tanks.  Wish I coulda been there.] 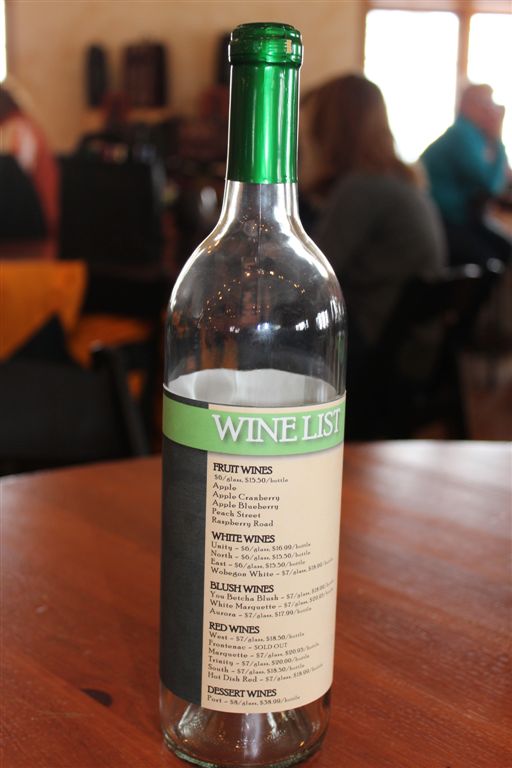 [The winery’s new wine and food menu – pretty darn neat!  I went for the Marquette on this day.  It’s a Minnesota grape, you know.  And as an at (that’s four words in a row starting with “a,” which had never been done before in the written history of the English language) least 1st-degree wine snob, I found it quite tasty!  🙂 ]

[Annie and boys were on task all day.  Unfortunately (or fortunately, depending on your standpoint), there was also a very large crowd on this day making the two videos difficult at best.] 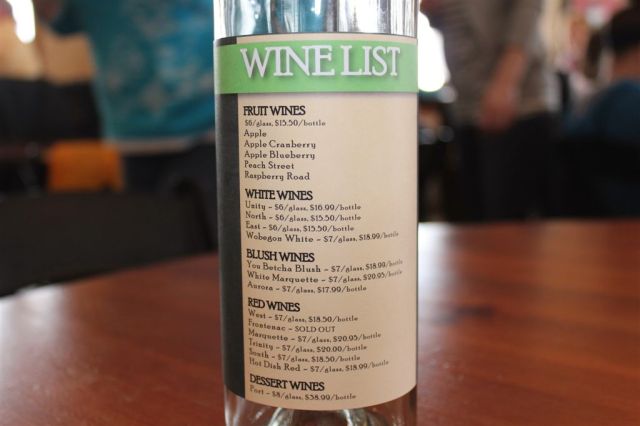 [I would now recommend West and Marquette to any oenophile.] 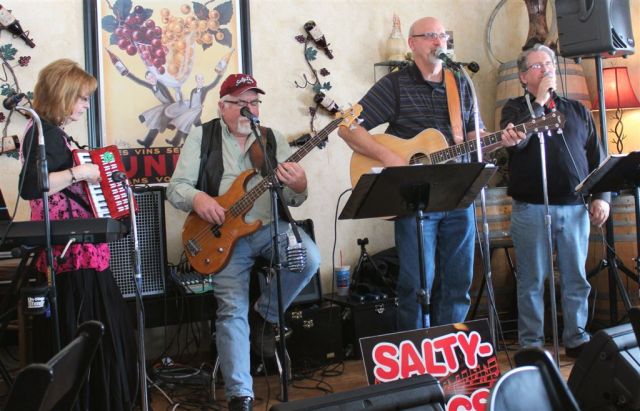 [I continue to be amazed that I know this many people with talent.] 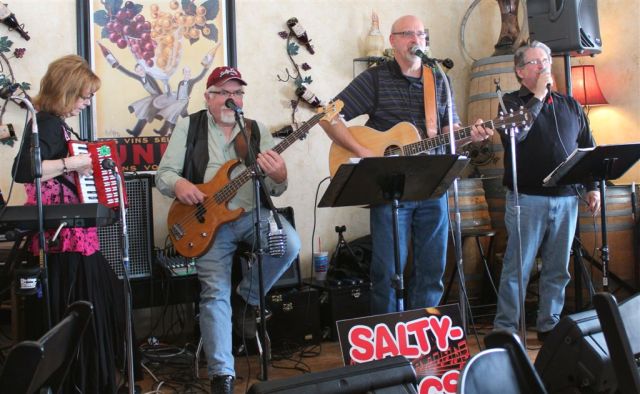 [Tonic Sol-fa (Echo Press photo) appeared Saturday night at AAAA before what had to be just a few seats away from a packed house.  This wrapped up our week of out-sized musical performances.  Almost enough to make us forget there’s a blizzard going on even as I type!]

[OK, the last one was a plant, but it was in the YouTube vicinity and reminded me my cousin’s kids did it!  🙂 ]

And for those who need their women athletes fix, this is amazing:

[Leaving you again with this morning’s sunrise – before the every 3rd-day snow front hit us again!] 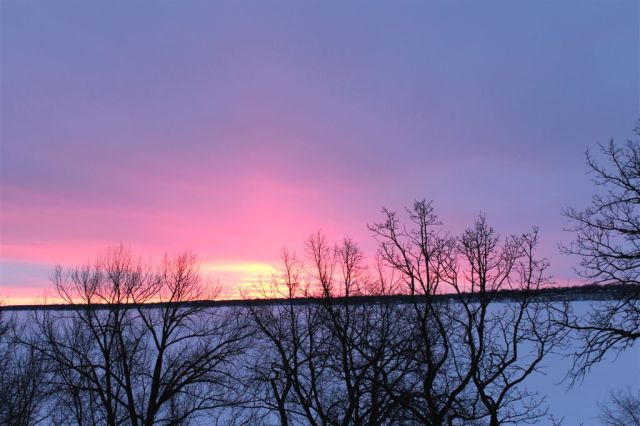 [There have been rumors that occasionally the ice on the lakes turns to water.  Hard to believe.]

In view of today’s happening’s, we have to leave you with one more Ole Slushball weather report:

Thanks for the report Ole Slushball!!!  ~  Loren

I watched about 1 1/2 hours of your archived photos last night. What fun seeing you two, the McMullens, Salem, Lexington, Walden Pond, the basketball games, the concerts, Washington DC, your house and lake, and all the snow.  Speaking of which, I hear more is expected Thursday.  I was exhausted from all the travel and headed for bed immediately after watching.  Signed up for your newletters.  ~  Fran  [A new fan.  Gotta love ya, Frannie!  😉 ]

Hey…do you or Ruthie have any suggestions as to where we should put our fishhouse out for the opener?  Any action in front of your place?  ~ Patty [Editor’s response: At my age the only action I get is when I take a laxative.]

Tom — Watching the Master’s with snow on the Minnesota ground must have been fun — to see all these jacketless folks, walking on green ground with flowers blooming?  ~ Cheers, Betsy

That was a lovely drive.    Driving would be out of the question at our place today.    After drought drought drought talk all year, Loveland presently is in the midst of  the biggest snowstorm I’ve seen for quite awhile.  Often unusual weather zips right by us or over us but we’re in the middle this time.   I still find your place to be beautiful.    Enjoy, enjoy.  ~   Love,  Aunt P

Enjoyed then drive video.  Glad you don’t have any ‘skeeters as of yet, but I enjoy our 70-80 temps down here.  You ought to do the same drive later this Spring when the foliage is out.  ~ Fitz

How poignant. Your words are so hopeful, yet your tone is filled with…sighs. Golfing in three weeks? I don’t believe you! Hahahaha! Lovely video, thanks, Tom! ~ Lisa

I suppose you text and drive as well.  Oh, Oh, forgot you do not have a cell phone. ~ Rock

Very pretty area.  The running commentary is not exactly scintillating, however.  ~  The Nanner  😉

Yes, but when you have a Lisa Lynn CD going it counteracts the commentary.  ~  Mark

Please don’t tell me you filmed this for 6-1/2 minutes while driving home alone!! Say it isn’t so.  ~ Regards, The Alex Police Dept. (a/k/a Crazy Dave)