WARNING:  This posting contains art!  A regular among the tens of readers was totally disinterested by the previous art posting.  What can I say?  Girls’ hockey season is over.  Besides, I’m a Renaissance man – meaning I know absolutely nothing about a whole lot of stuff.  Enjoy the art from your nation’s capital.

[It’s January 31.  Our first day back in D.C.  Not unlike Boston, we had a bright, sunshiny day – with about 40 mph winds, making the windchill, again, very uncomfortable.  We were amazed at the condition of the mall, which had been “all fixed up” recently.  I think it was a first.  I lived there over 30 years, and for the better part of that the so-called grassy area of the mall was splotchy at best.  In the Park Service’s defense, the mall gets a lot of use (including various kinds of ball games) – it’s the nation’s front yard.  A million people were here less than 2 weeks before for the inauguration.]

[Expanding the supervisor’s horizons.  We heard the people who general occupy the domed facility in the background all fled town we they heard we were coming back!]

[Turning 180 degrees from the previous photo, there is an obelisk named for the first president of the United States.  The Smithsonian castle is the building on the left.  If you drew a straight line from here, through the Washington Monument, to about 3 miles on the other side of it, you would find our previous domicile.  It was an easy bike ride for us to go to the mall.] 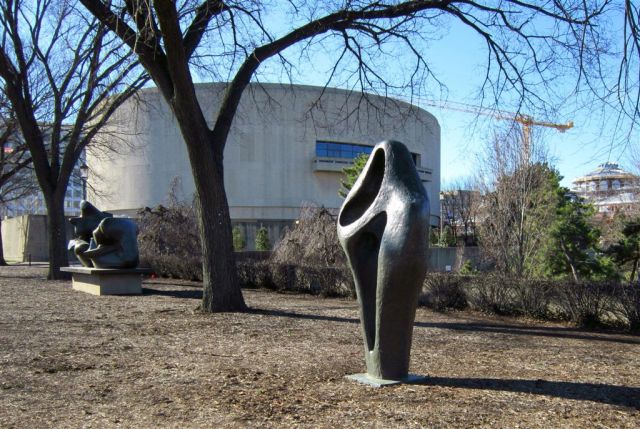 [To escape the biting wind as soon as possible, we sprinted to the Hirshhorn Museum’s Sculpture Garden, which was just off to the left of where I was standing when I took the Washington Monument photo.  The “we” now included our D.C. host (yes, we inflected ourselves upon old friends again), Bill (and Anne) Gross.  The two statues in this photo are by Henry Moore, whose works are often described as sensual.  I concur.  😉 ] 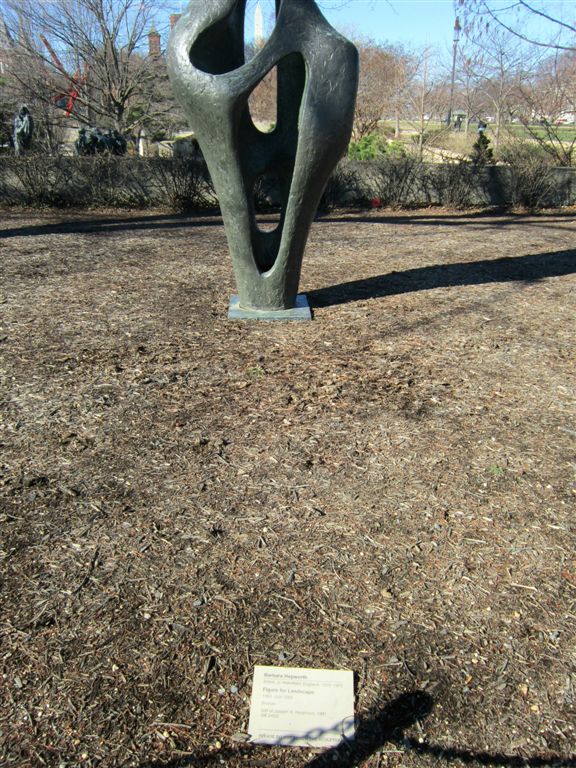 [The same Moore, though the descriptive plate didn’t work out.  By pure dumb luck I just noticed the Washington Monument is nicely framed in this photo!  🙂 ]

[Down in the Sculpture Garden and thankfully out of the wind.  The building is the Hirshhorn.] 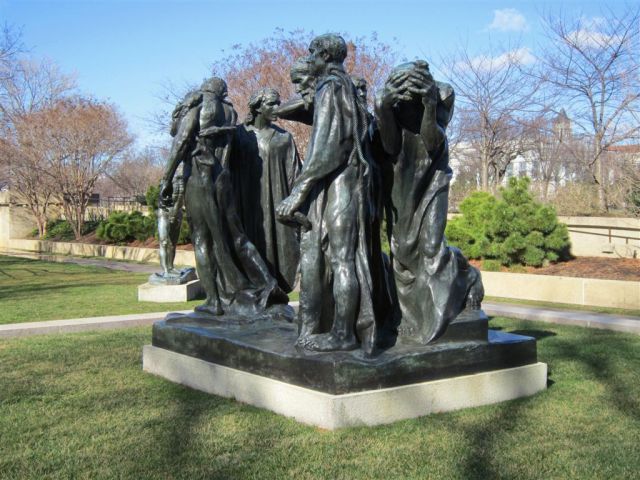 [I will now begin a series of photos of art.  I know art when I see it.  This has art written all over it.  Plus, it continues a pattern established from the art of the Peabody Essex Museum in Salem!] 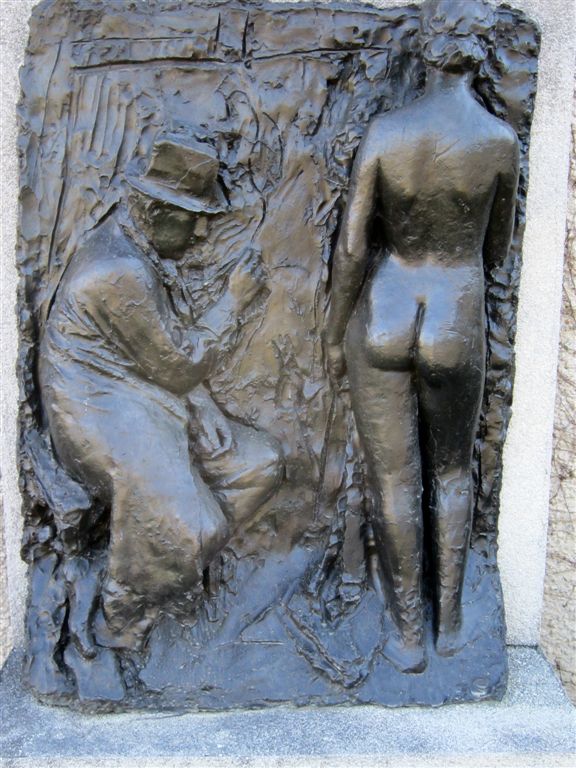 [Bill and the supervisor proceeded apace into the building to warm-up.  So I flew around the Garden, rapidly taking photos, often without identification.  I’m too tired to go the internet to try to identify all these.  Sorry, my bad.  (OK, I looked.  It’s Giacomo Manzu’s, “Self Portrait with a Model at Bergamo,” 1942.] 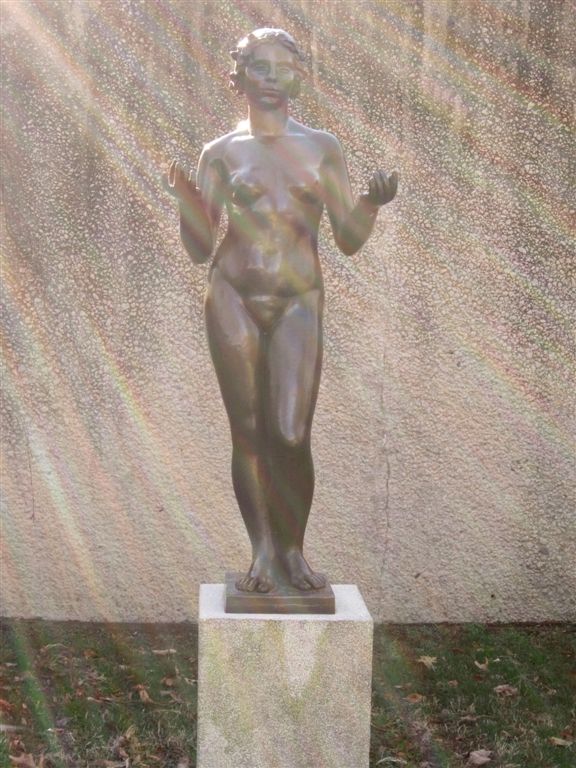 [Now I’ve been to the Hirshhorn many times before.  In fact, it’s just a couple blocks from where I worked.  We would occasionally have our lunchtime nosh in this vicinity to check out the displays in the Garden.  It isn’t a static place.]

[A best guesstimate would be statuary?]

[These guys are The Burghers of Calais.  It was also the first photo (above) down in the Garden.  In the background is the National Gallery of Art, on the other side of the mall.] 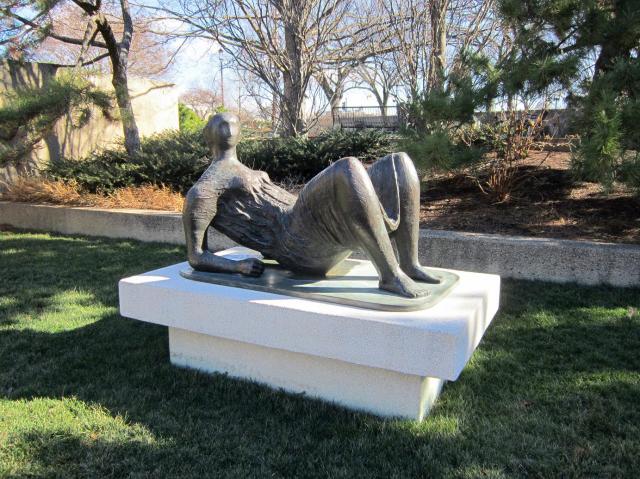 [My attempt at art?] 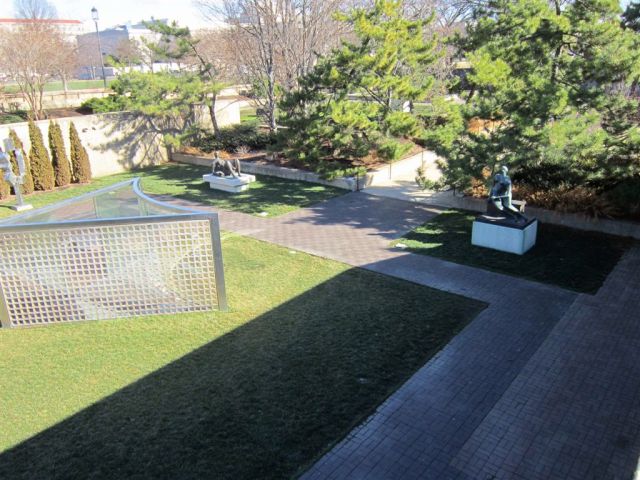 [View across the Garden.] 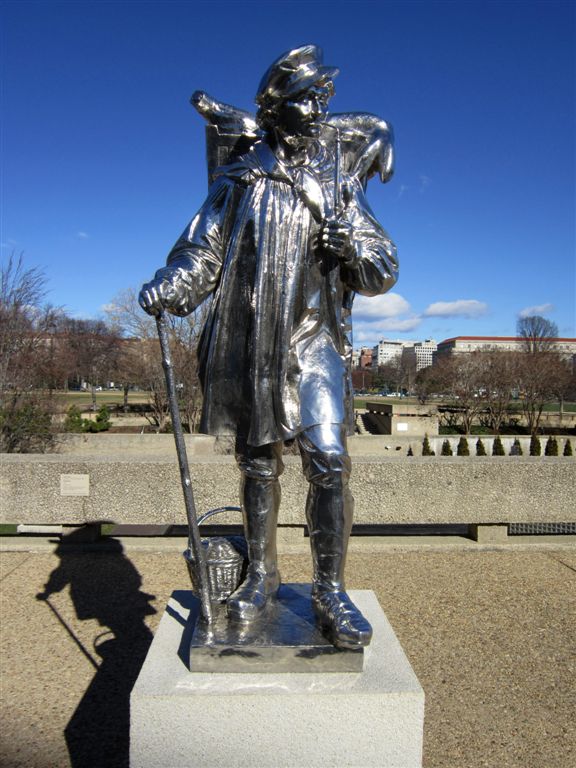 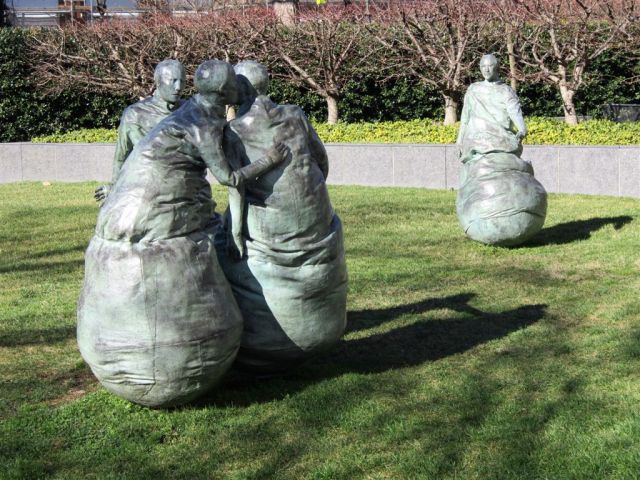 [The supervisor and Bill enter the hallowed grounds of the Smithsonian castle.]

[National Museum of African Art.  We paid an extensive visit on our previous visit.]

[The castle, where soon we would be lunching!  🙂 ]

[And this is why.  We were there for the “Roads of Arabia.”]

[Just confirming that’s what it said.]

[“Monkeys Grasping for the Moon,” Xu Bing, 2000.  21 interlocking laminated wood pieces that suspend from the skylight to the reflecting pool on the bottom level.]

[Head from a figure of the Buddha.  That’s what the sign says.] 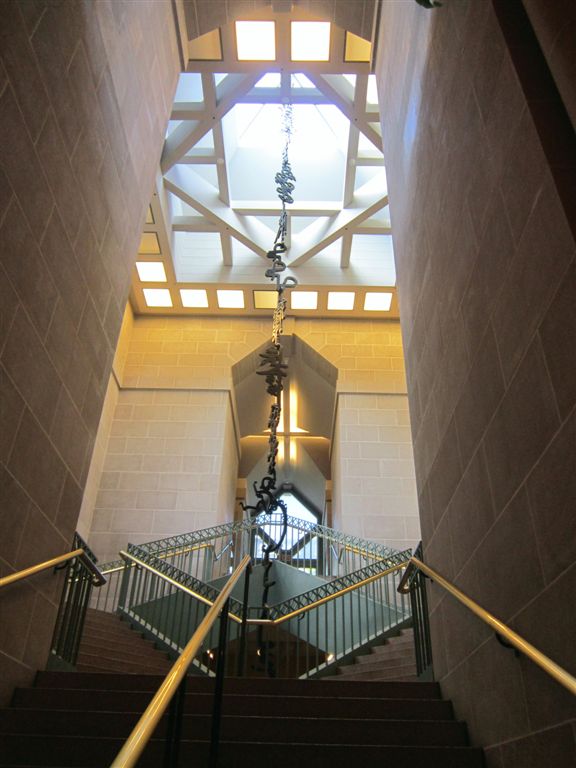 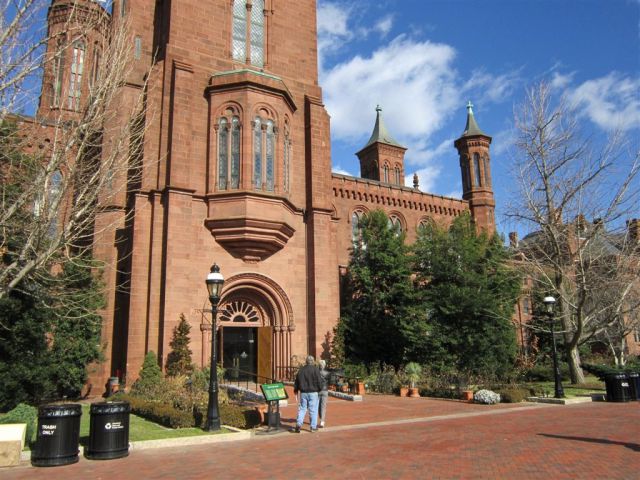 [Inside the castle.  Gift shops and a restaurant.  Bill selects aisle seating.  “Weakie” queried as to our bills of fare at dining places – here it was a sub.  😉 ] 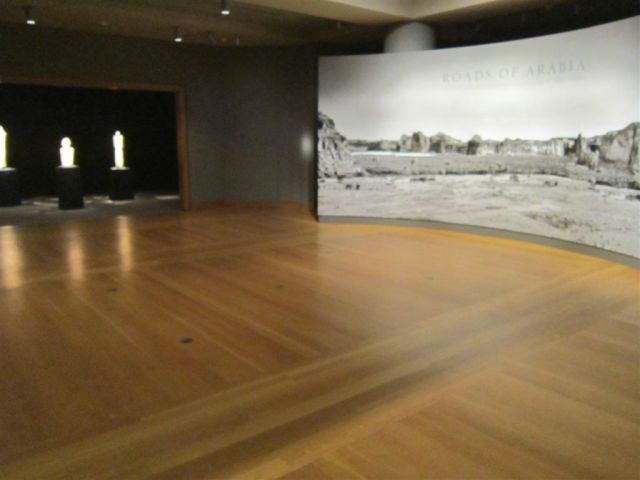 [Sated, back to the Sackler.] 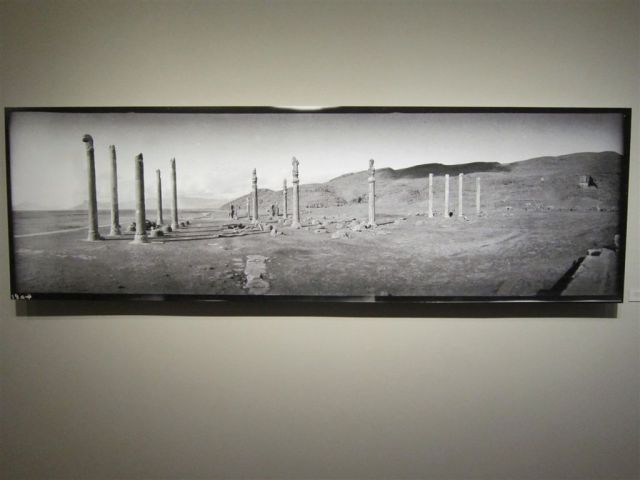 [What an isolated area!  Explained below.]

[Apparently only accessible by subway.] 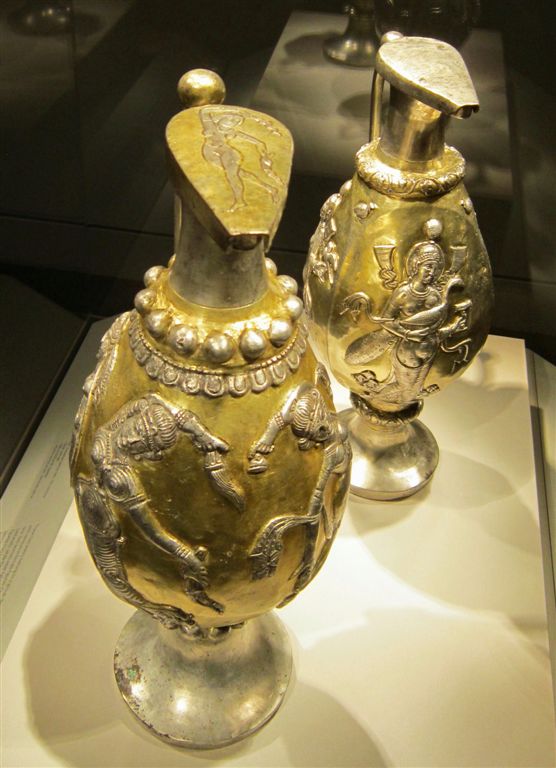 [The supervisor claiming she was “framed.”  We are now back at the Hirshhorn where we were reminded the Ai Wei Wei exhibit was on display.  Our timing was purely accidental, though we had recently heard of his work on national news when we were still home in Minnesota.  The artist (pronounced “Eye Way Way”) is a Chinese dissident who is forever getting in trouble there.  What’s not to like?] 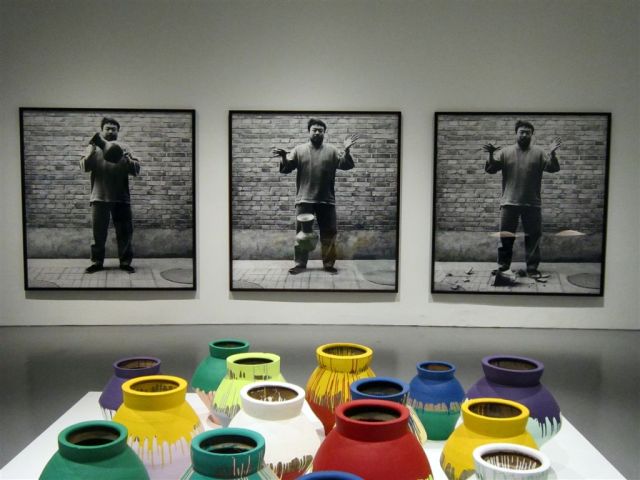 [Ai in the photo, his art in the foreground.]

[This is what made the U.S. news.  He filmed himself dropping, and breaking, and priceless vase from antiquity – his point being it’s just a pot, take care of people.]

[Art students with their teacher.  Drawing stuff in the outside atrium.]

[This Ai stuff was really neat.  “Really neat” is a complex critics’ term used in the art establishment.  Anyway, it was literally “floor to ceiling” photos.] 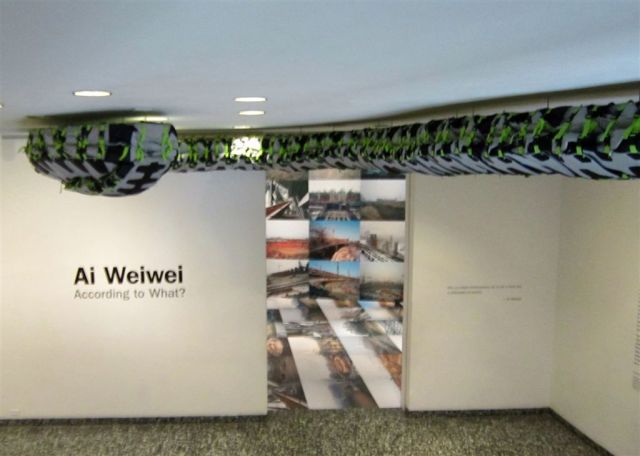 [A snake snakes along the ceiling, with the view into “floor to ceiling” photos room.]

[Looks like Andy Warhol.  Don’t know if it’s suppose to be.]

[The beautiful panorama view from the Hirshhorn’s second floor across the mall.]

[Ditto toward the northeast.]

[Ditto to the northwest.] 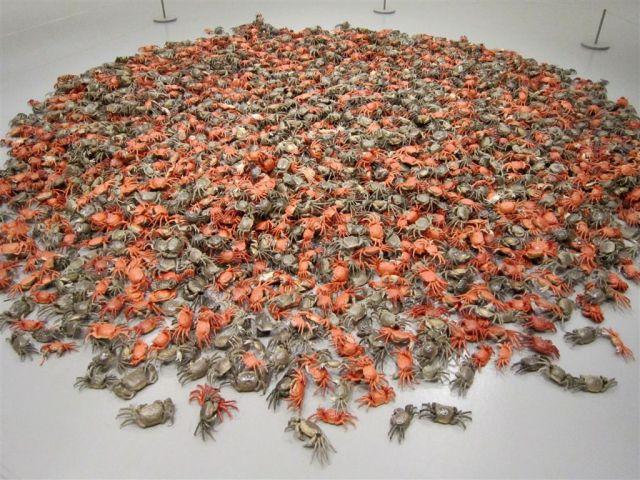 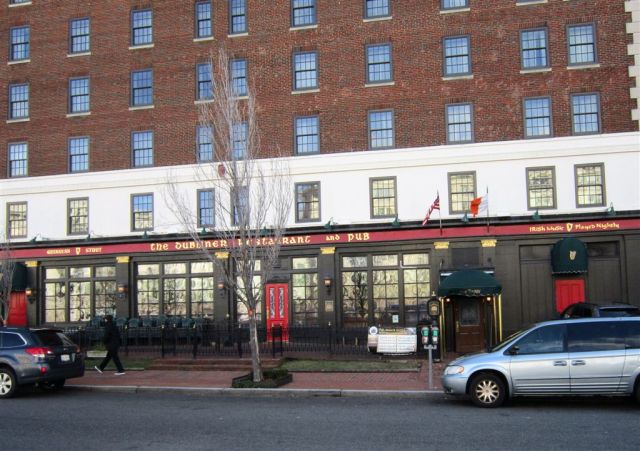 [The Dubliner.  Not far from the Department of Labor, we visited here occasionally.  😉  Came to set up a future lunch date with whoever wanted to join us.  The President made a campaign visit here , and the “Morning Joe” show broadcast from here for the week before the election.] 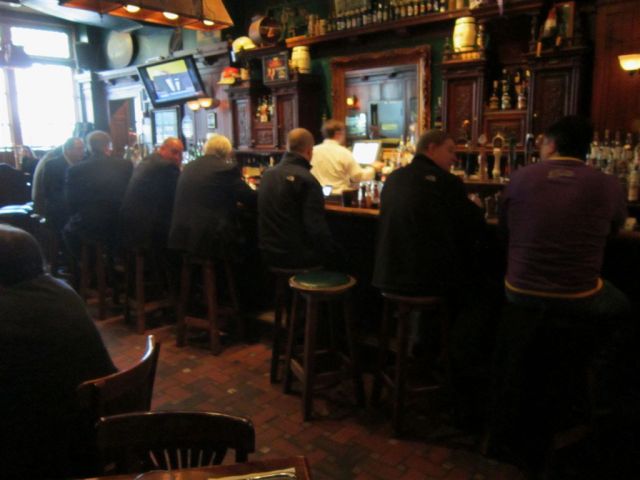 [Where the supervisor worked.]