A Brief Musical Interlude and . . . a Blizzard!

[The excitment that is a weekend in Alexandria began Friday with a visit to the AAAA Theatre to see Rumors.  Yes, it is profane – but it is also Neil Simon.  So laugh yourself silly and enjoy the fine performances by your friends and neighbors!  Echo Press photo.  (Editor’s note:  We had initially planned on seeing the Sunday afternoon matinee (i.e., right now!), but Mother Nature had other plans.  Today is indeed postponed.  But you have all next weekend to enjoy the show!)]

Saturday offered the usual plethora of possibilities.  We ultimately decided on an afternoon at the winery with The Salty Dogs (the supervisor stayed home to rest as she is still battling the “don’t feel so goods” she carried with her through the eastern trip), and an evening with Harper’s Chord at SAWA.  This required the ultimate sacrifice – missing the girls’ basketball game against Bemidji – but Harper’s Chord had only made one previous visit, in October, so we were really looking forward to their return performance.

[As you can see, they randomly changed positions for the 2nd photo and are now, l-r: Tom, Erik, Al, Annie, and Bruce.]

[Actually performing . . . to the delight of the assembled masses.]

[Erik is getting so proficient as a lead guitarist that I believe he is thinking of leaving his day job, which has something to do with telling people where to stick their money.]

[Couldn’t get into Zorba’s for their post-performance repast.]

[I left the winery, swept up the supervisor, and headed for SAWA.  We had a little nosh and a BV cab, as I recall.  Then I began coverage of the entertainment because . . . I don’t do gardening.  Here Roger Fink and Paul Drinkwine, both of St. Cloud, practice moving their fingers up and down a set of vertical wires for the purpose of making pretty sounds.] 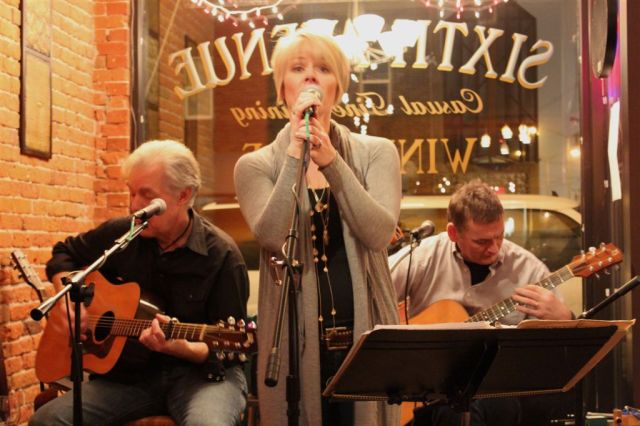 [They were then joined by Jill Moore, of Little Falls, who made pretty sounds with her vocal cords.] 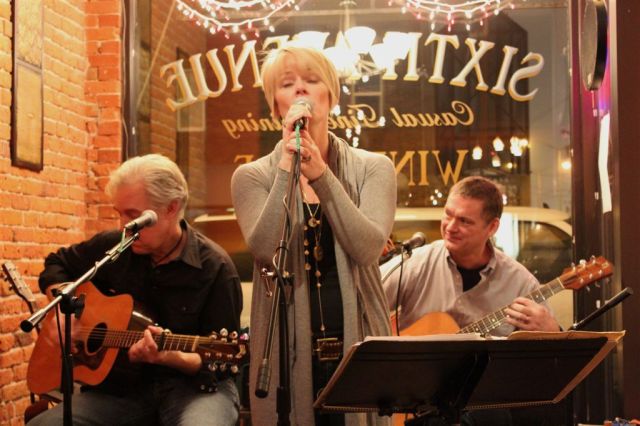 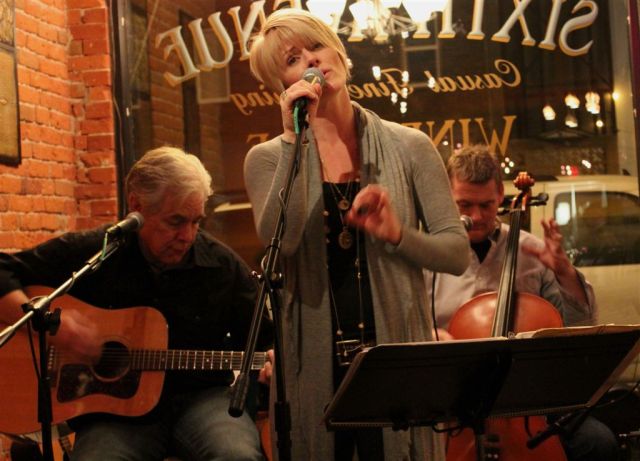 [Paul plays the guitar, mandolin, harmonica, cello, and the viola (like a cello).] 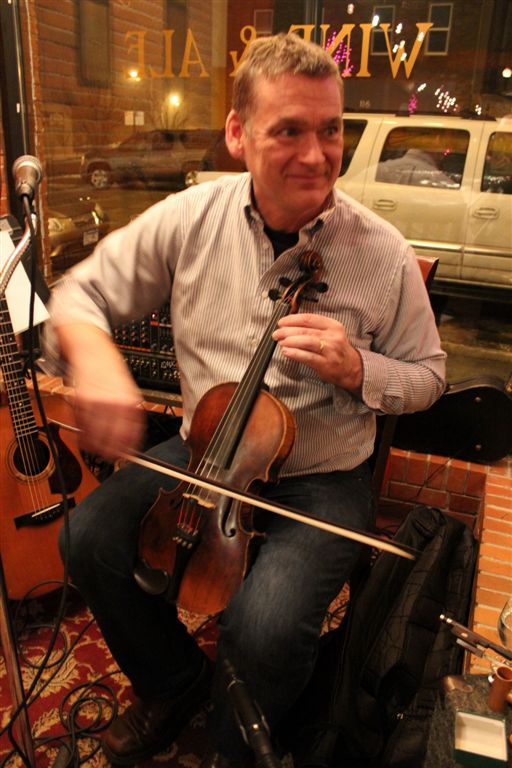 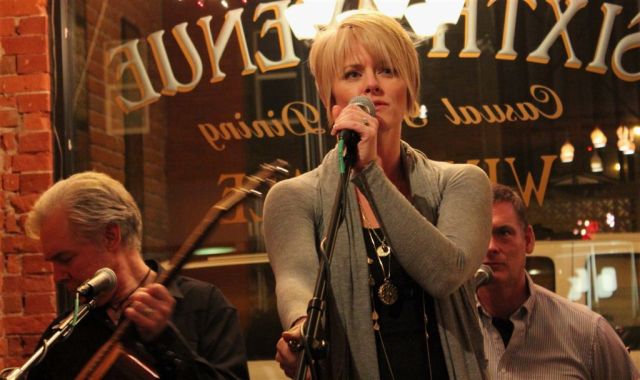 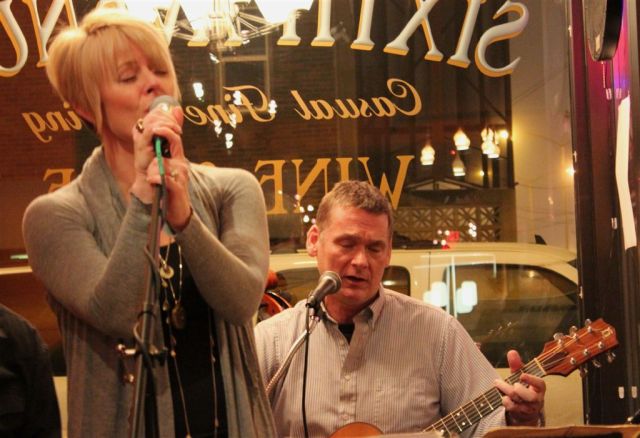 (Apologies on “I Was Here,” one of the supervisor’s favorites.  Operator error – couldn’t get the darn thing to focus -caused me to miss about the opening 30 seconds of the song.)

(Apologies on “Natural Bridge” as I changed positions to video “everyone’s” favorite song, and the title track on their CD, as the video and audio aren’t the crispest?)

Thanks again to Jill, Roger, and Paul.  Had a great time and look forward to seeing you again!  🙂 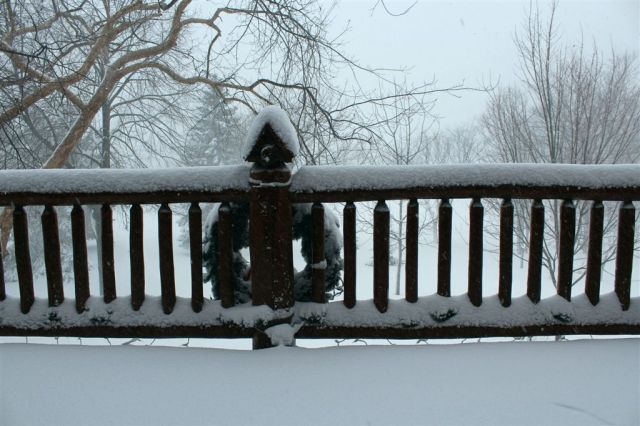 [Actually began to some degree on Saturday with an all-day mist, drizzle, flurries that had us worried our out-of-town “guests,” Harper’s Chord, being able to make it.  But the snow began some time overnight, and this was the view out front early this morning.] 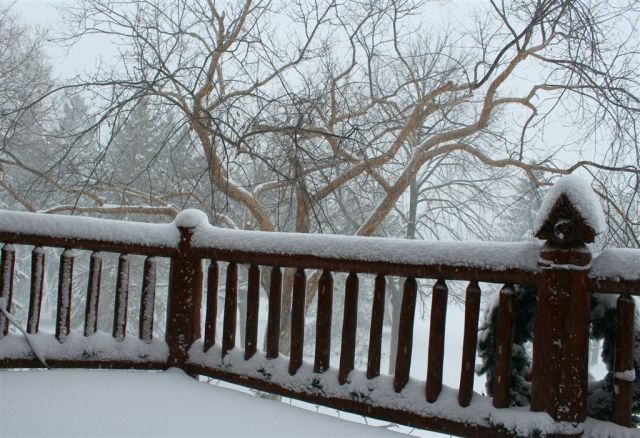 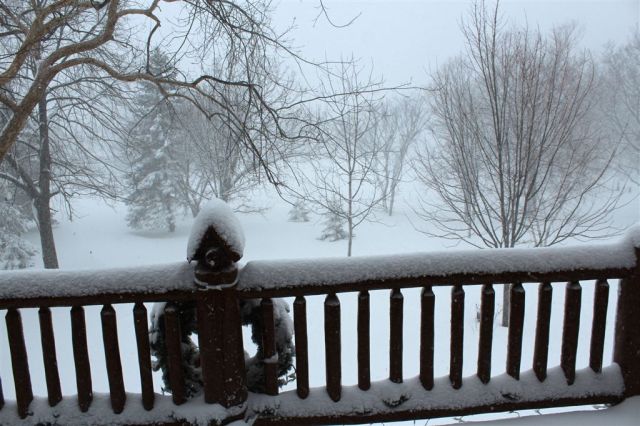 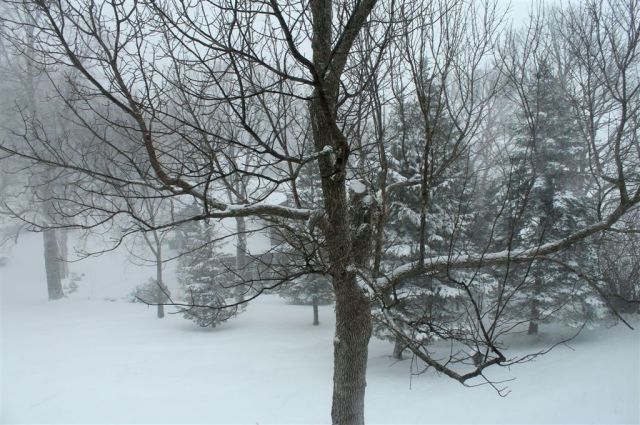 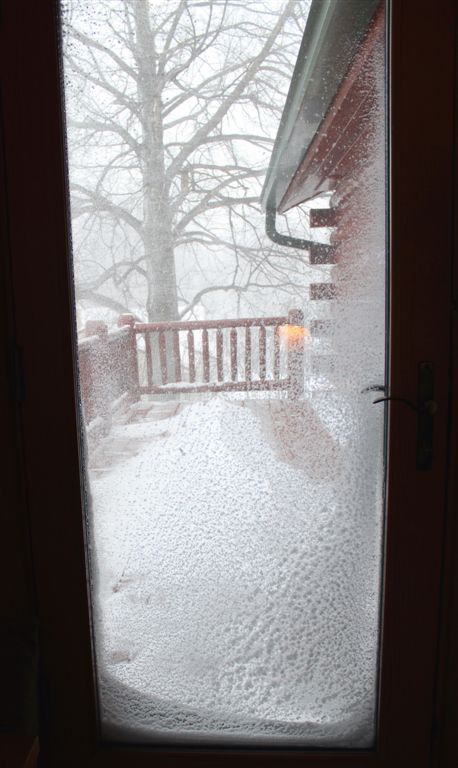 [Master bedroom deck, and below.] 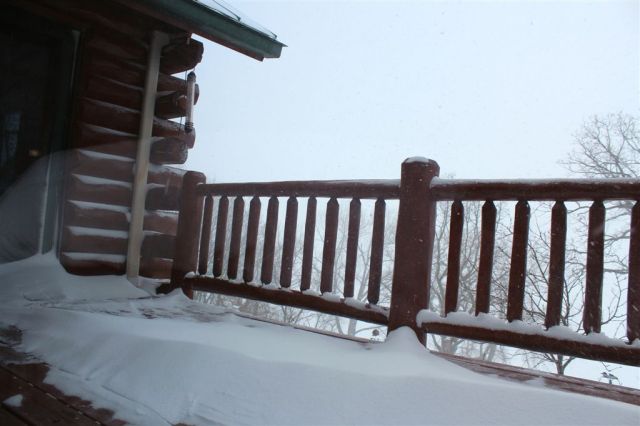 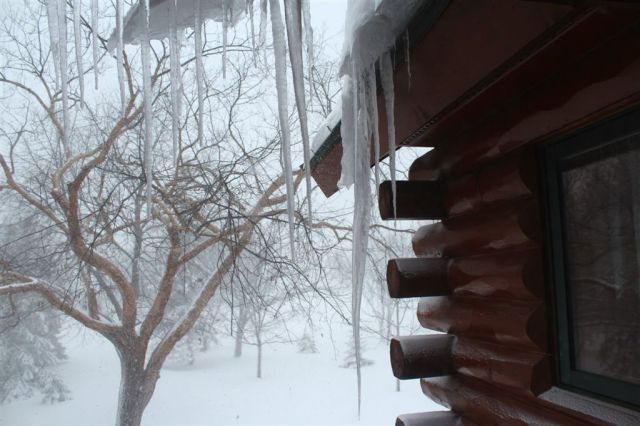 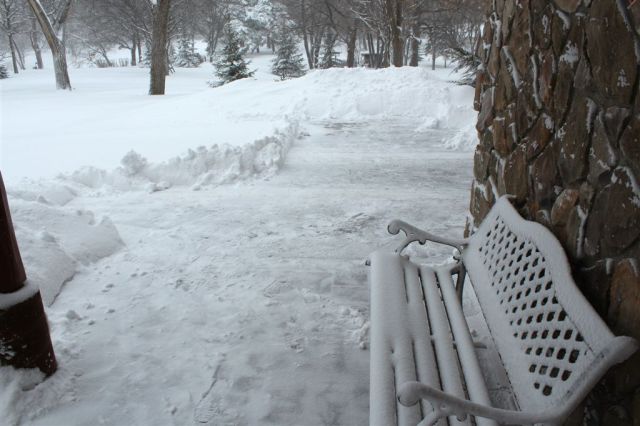 [I went out to clear the front door and garage slab in mid-afternoon.  They had predicted 8 – 12″, and that appears about right.] 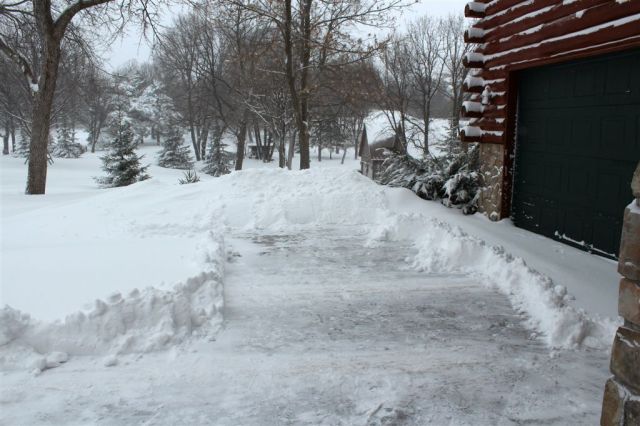 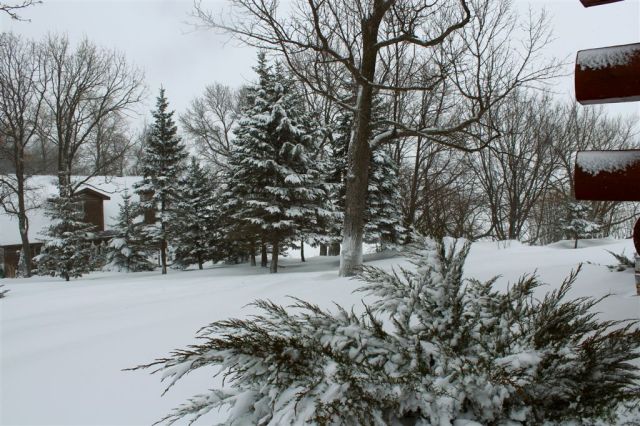 [Beautiful Lake Darling is hiding in the background.]

[Northwest across the neighborhood.] 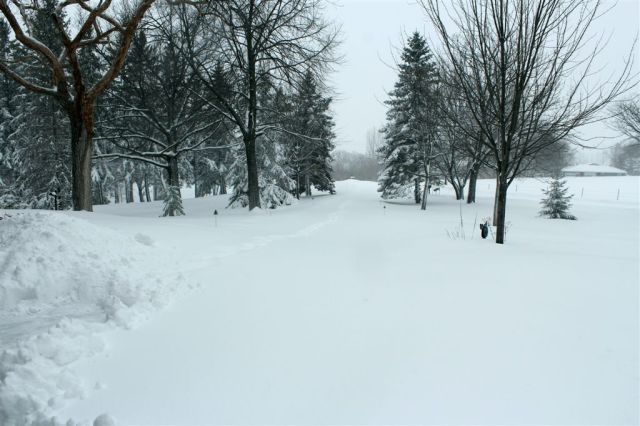 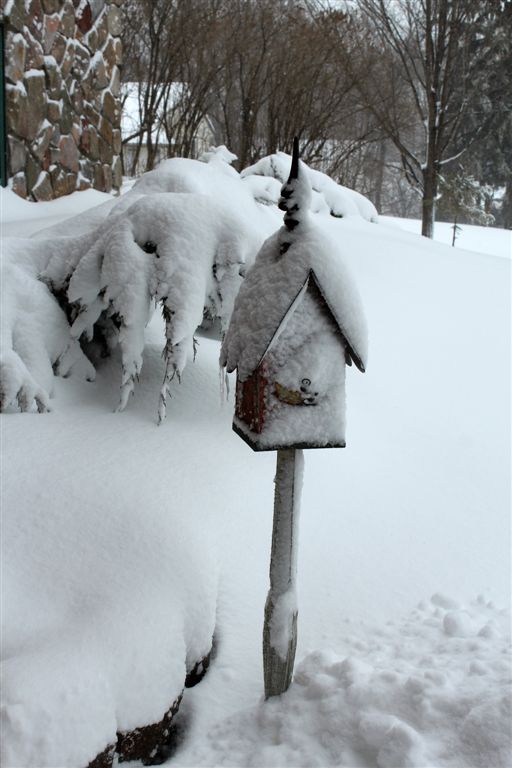 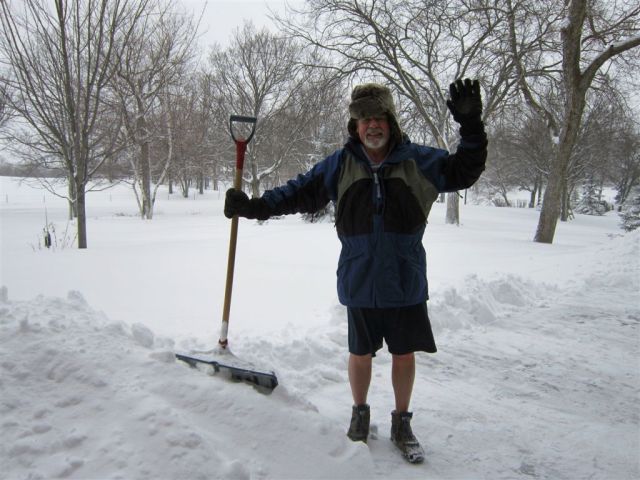 [Modern-day warrior, not some sort of snowbird weenie!] 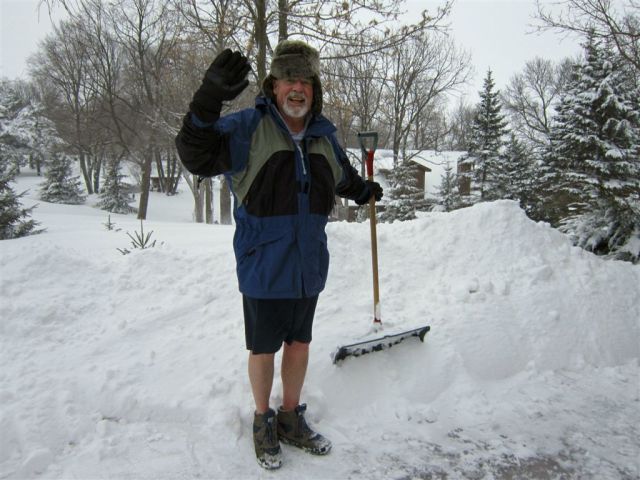 [Some guy on a snowmobile stopped and gave a shout out to my legs.  Eat your heart out, buddy!!  😉 ] 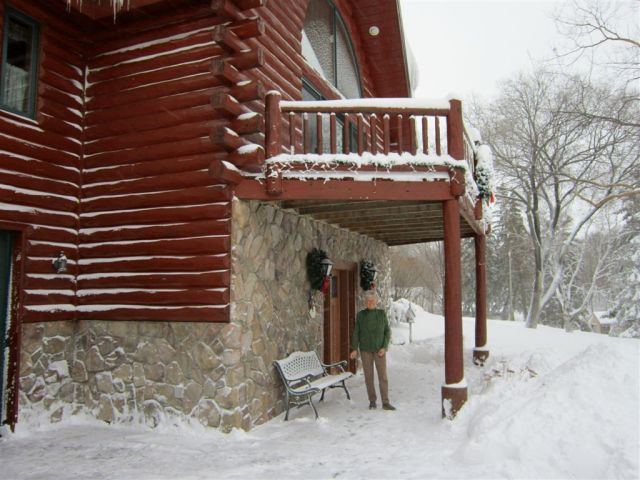 [The supervisor stepped out to . . . well, supervise.]