The Supervisor Made Me Do It

You may recall the weather incident we had over the weekend.  The supervisor thought, therefore, it would be a good time to tackle the basement walk-in closet, loaded with plastic storage bins.  I believe her exact words were, “Get rid of stuff you don’t want to move!”  I’m not sure how her consolidation went, but I turned three of my bins into slightly less than one (still a lot to go though).  The closet looks much emptier now.  But the closet space’s gain is academia’s loss.  After hoarding for lo these many years, out went notebooks from high school and college days.  Much of those were dated anyway – I believe we have subsequently discovered that the world is not flat.  I did recall an anthropology professor positing that Americans were too clean – that there is no need to bathe daily.  And then I recalled that I must have showered 10 times a day going through high school as I tried to comprehend the change (never did) and believed pimples were the result of a personal hygiene deficiency.  (Mom, “I can’t believe you have any skin left on your body!”  Me, “Well, at least I’m clean.”)

[Uncle Dick and Danny at the site of many Conner family vacations, with Mrs. Pepper at Fenwick Island, Delaware.  I’m not sure if the Pepper cottages are still there – the last time I was in the vicinity they were flanked on all sides by high rise condominiums.]

The stuff that wasn’t tossed is what’s being inflicted upon you now.  But then this site doubles as a personal diary and family history site.  So I beg your indulgence until the next local sports or other entertainment event.  So, from mostly 50 years ago . . .

[I don’t know why there was no Third District?  The school bus ride to Waseca I’m sure was the longest such ride I ever endured in my long, yet undistinguished, athletic career.]

[We finished 2nd!  But by the championship game, we (Alex, population 6,000) had run out of pitchers against Bloomington (population 80,000).  Nevertheless, as a result of this showing, our high school team was ranked 2nd in the state my senior year.]

[Victoria Heights, June 1962 (you can see that on the right side of the photo, duh).  On the left is Rick Gorham, a lad a couple of years younger than the other two guys.  Rick went on to become the first Alexandrian ever to win the Resorters Golf Tournament, no doubt attributable to the company he kept in his youth.  The guy on the right is “Jungle” Pete Hintzen, who went on to a stellar Cardinal career in both football and baseball.  Pete actually trained with weights then – I don’t recall anyone else who did?  He got the nickname “Jungle” because he started shaving in elementary school and by high school required several touch-ups daily.  The guy in the middle wore an orange shirt for no apparent reason.]

[Uncle Dick and Pete play badminton in the middle of lightly traveled Knut Street.  Old-timers will recognize Archie and Amelia Holt’s house on the left.] 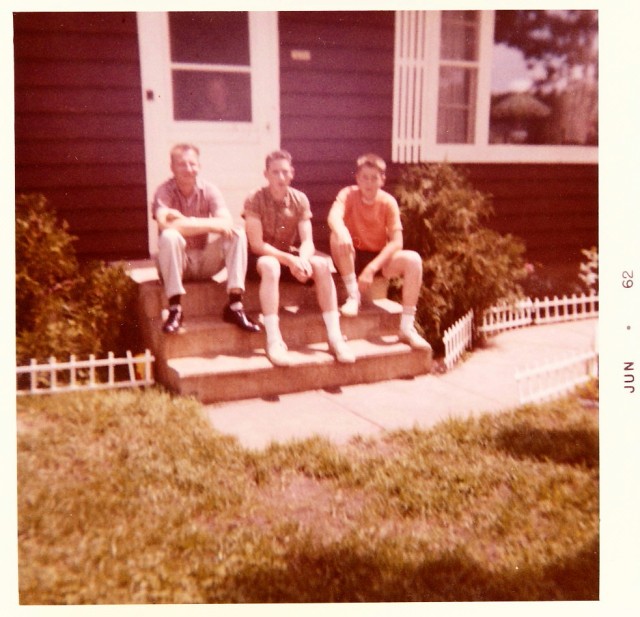 [Uncle Dick, Pete, and I enjoy a sit on the front stoop.  Little brother Cam, as usual, can be seen lurking behind the screen door.] 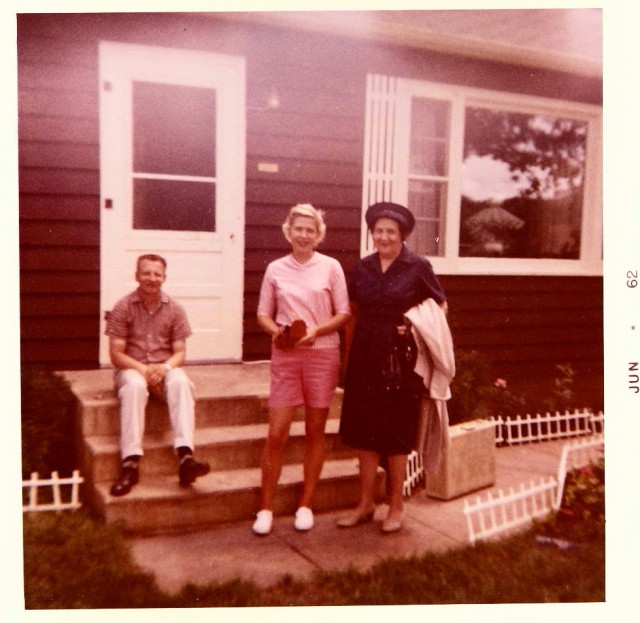 [Eventually purchased by the McCoys, who live there to this day.  🙂 ] 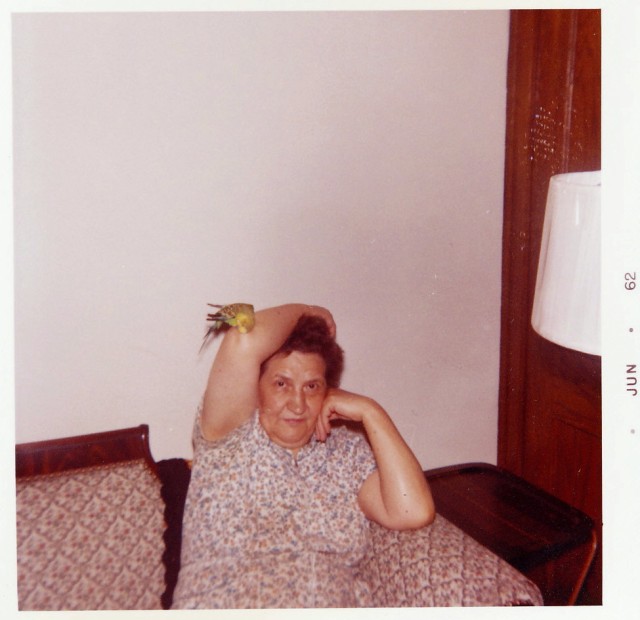 [Still June ’62, Grandma Thompson in her apartment at 516 University Avenue, SE, Minneapolis, where she lived with Uncle Dick and her parakeet, Petey.]

[Yes, we used to play Breckenridge.]

[Many of these players are still known to Alexandrians to this day!  Or are them!]

[I actually remember this game because playing a team from the Cities was unique.] 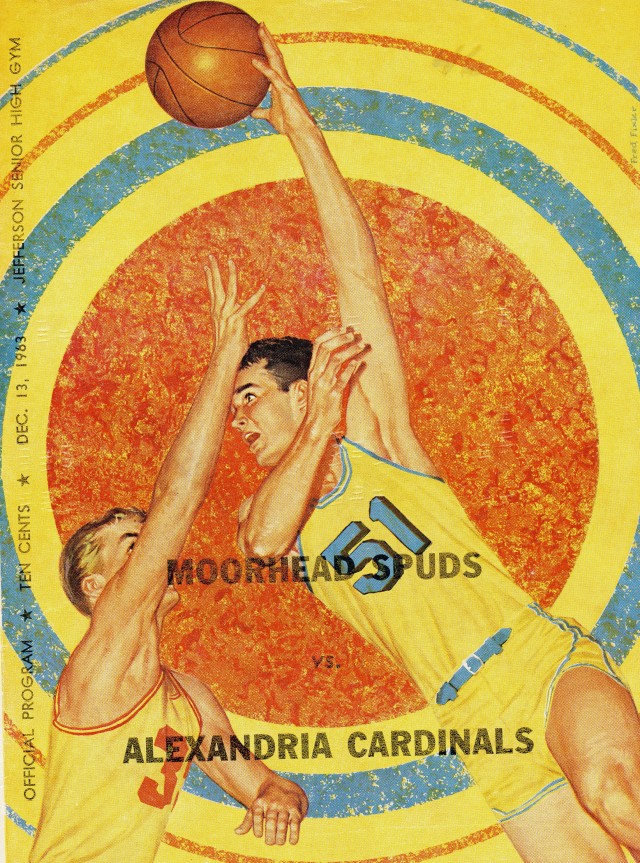 [Yup, played at JHS that year!]

[As long as we’re doing basketball, many times during this era I took the train (remember them?) to Minneapolis to see Gopher games with Uncle Dick.]

[I had several programs from ’63, but you get the idea.  I actually have more programs from Gopher football, but the cover photos were just of campus buildings . . . ] 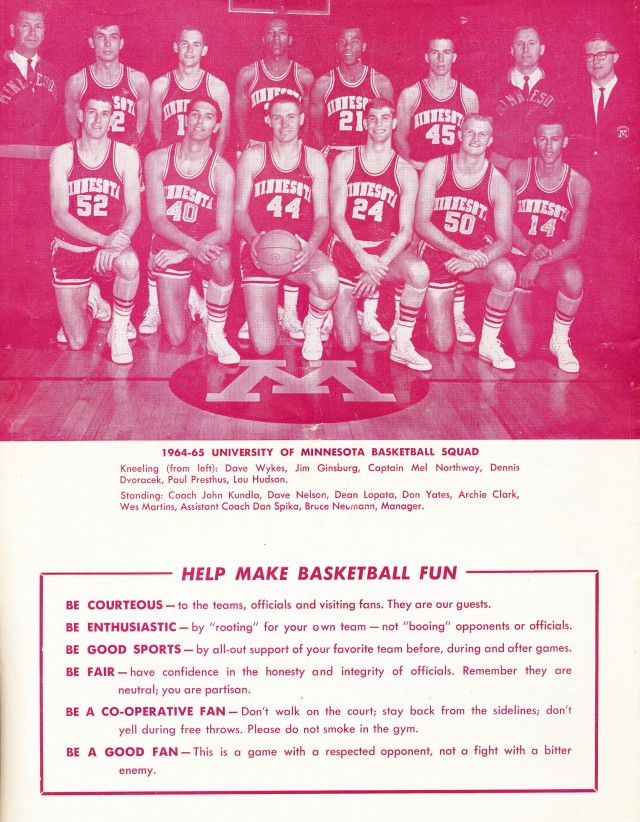 [And then in ’64 – diversity arrived.  What fun it was following the Lou Hudson, Archie Clark, Don Yates teams!  🙂 ] 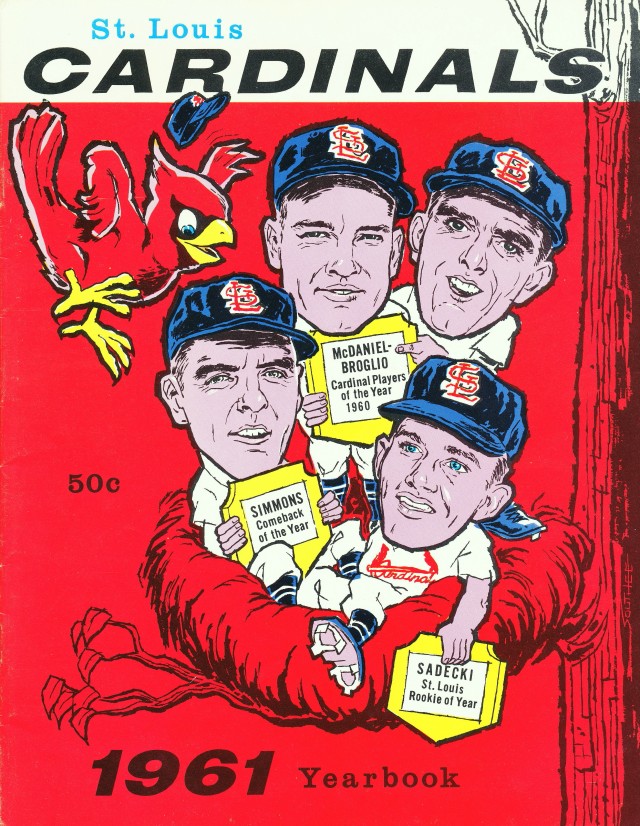 Which leads us back to our 1963 trip to visit the Delaware cousins.  They, of course, were Philly fans.  So they took us to games at Connie Mack Stadium, its last season ever.  Both the Phillies and the Cards were really good that year.  And for the 2nd, and last, time in my life I sought autographs (the 1st being the ’62 Gopher football team).  I’m now glad I did – for here I got Stan Musial, Bob Gibson, Curt Food, Ken Boyer, Red Schoendienst, Johnny Keane, and announcer Jack Buck – All-Stars all!  🙂 ]

[Stan Musial, my first baseball hero.  Unfortunately, it looks like we must have used his autographed 8×10 glossy as home plate!  😦 ] 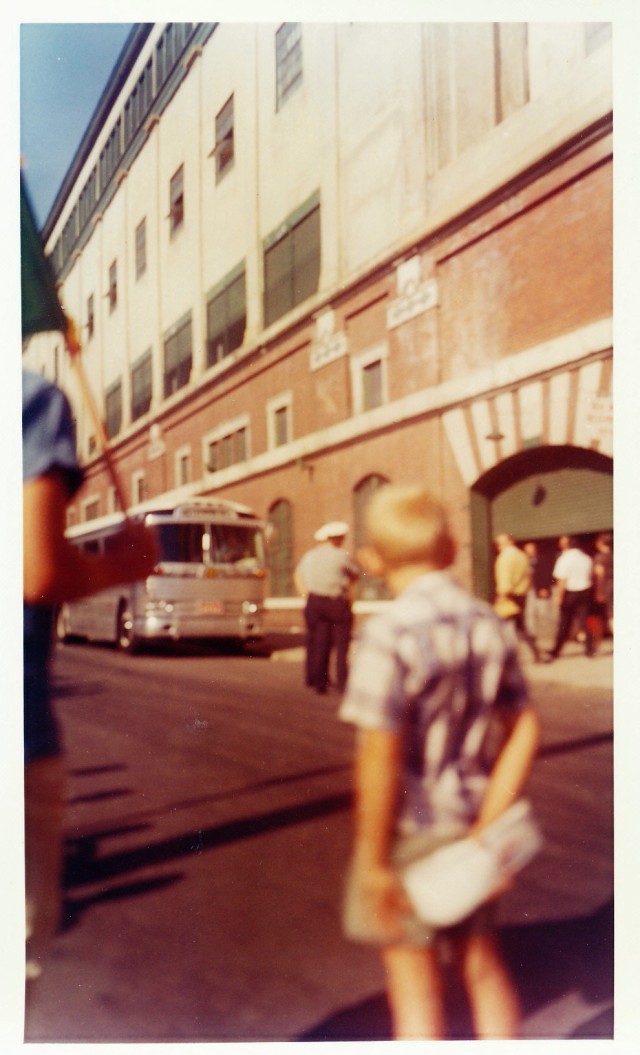 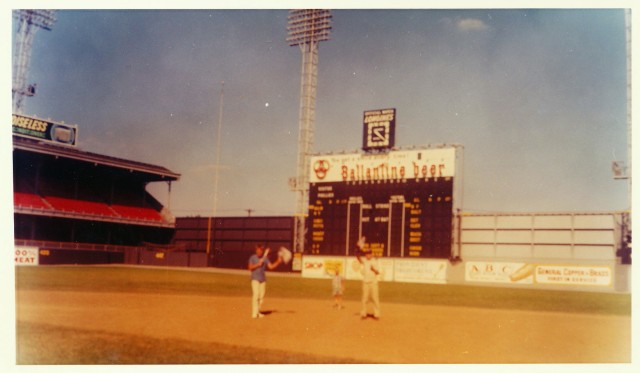 [On the field after the game.]

[And then it was off to Independence Hall.]

Meanwhile, back at Fenwick Island . . . 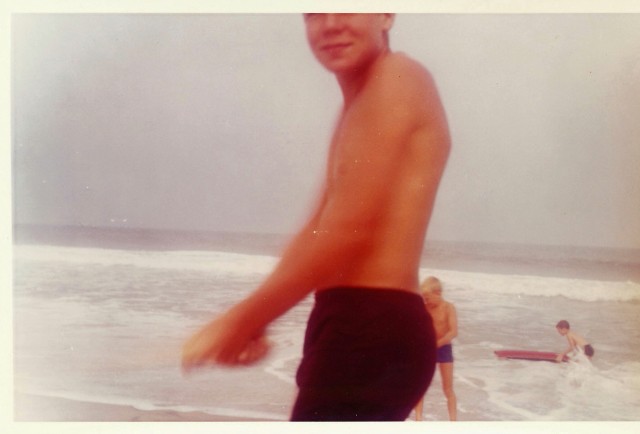 [Unfortunately, Aunt Louise (Mom’s sister), bless her heart, was occasionally known to lop the heads off her photographic subjects.  Here I was partially decapitated – probably an improvement (nice tush though, huh?).]

[I may have tippy-toed out of the frame here as I appear to have been surprised by the background wave action.  That’s Cousin Kathy with us, the eldest of the Conner children at my age.  Hard to believe the people were are “covering” now are the same age as the high schoolers in this photo.  Each state at this time selected two presidential scholars (not sure of the exact title) for a trip to the White House – Kathy was one of the two from Delaware!  🙂 ] 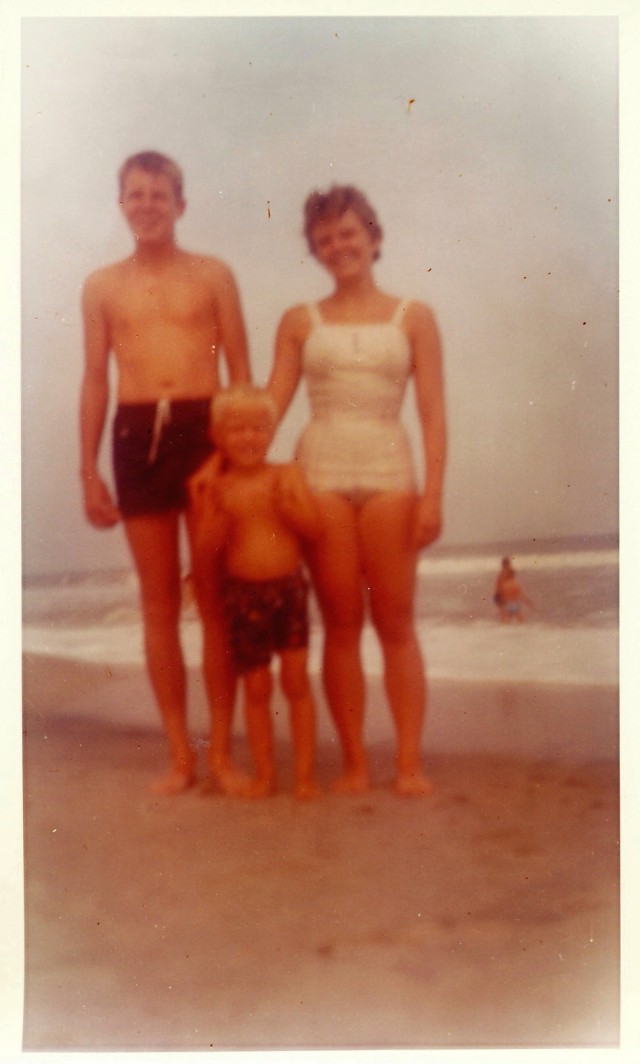 [Little did we know at the time that our family would soon be moving East, so our next visit to the ocean was just a couple years away.] 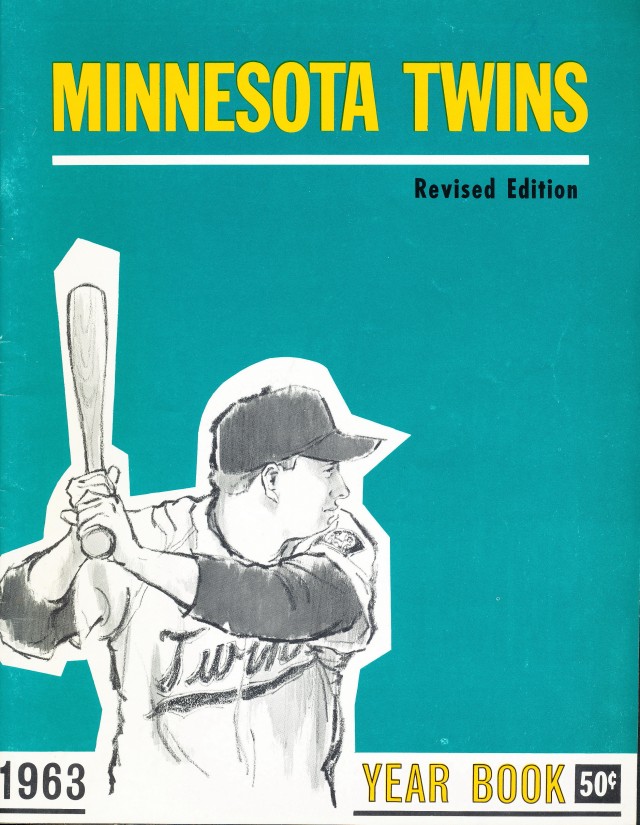 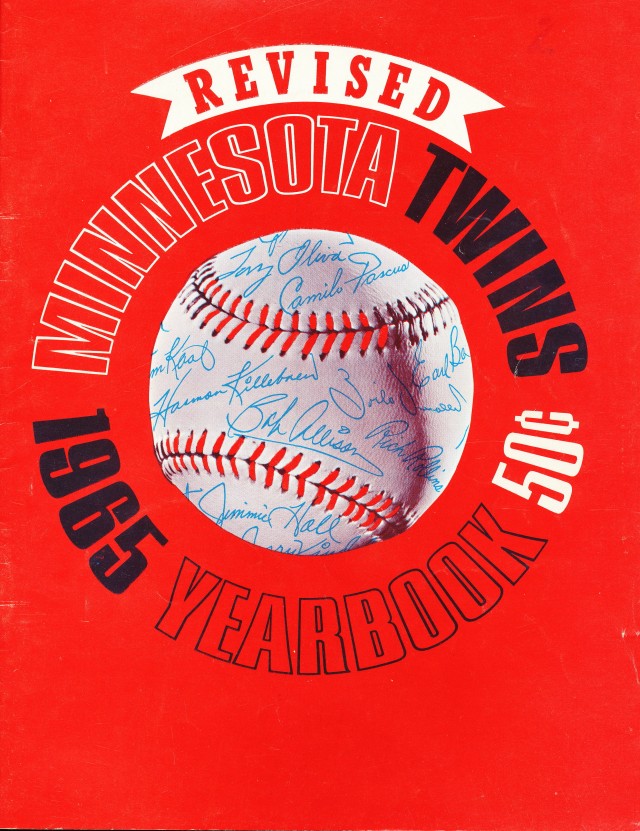 [Graduation notice – not “shredded” at the bottom, it was designed that way! 🙂 ]

[Terry.  OK, not an Alex alum.  From Litchfield, class of ’65.  My college roommate.  The Jim Ahlfors of Litchfield.  All-around good athlete.]

[Mike, Greg’s younger brother and thus not from our class.  I have no idea how I got his photo?] 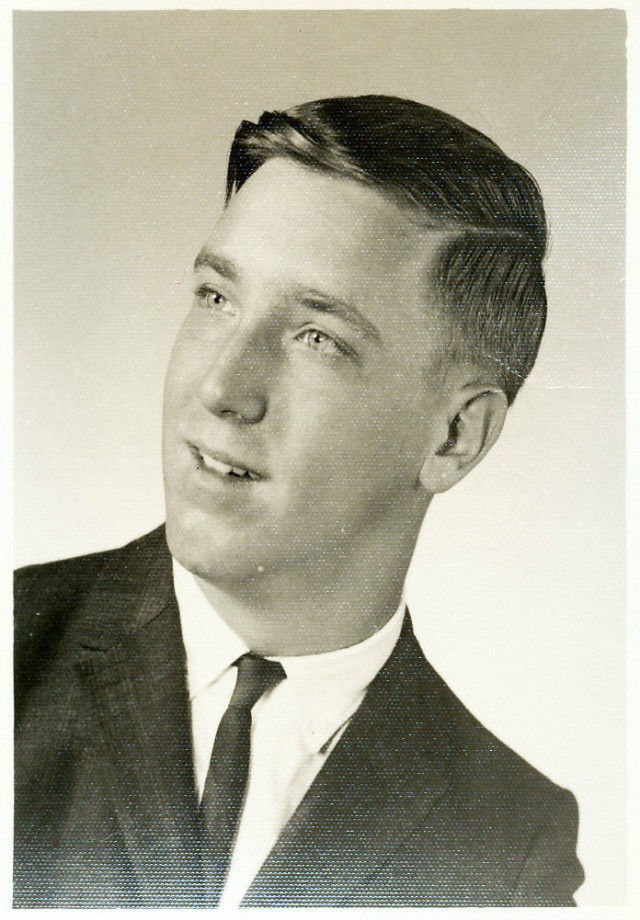 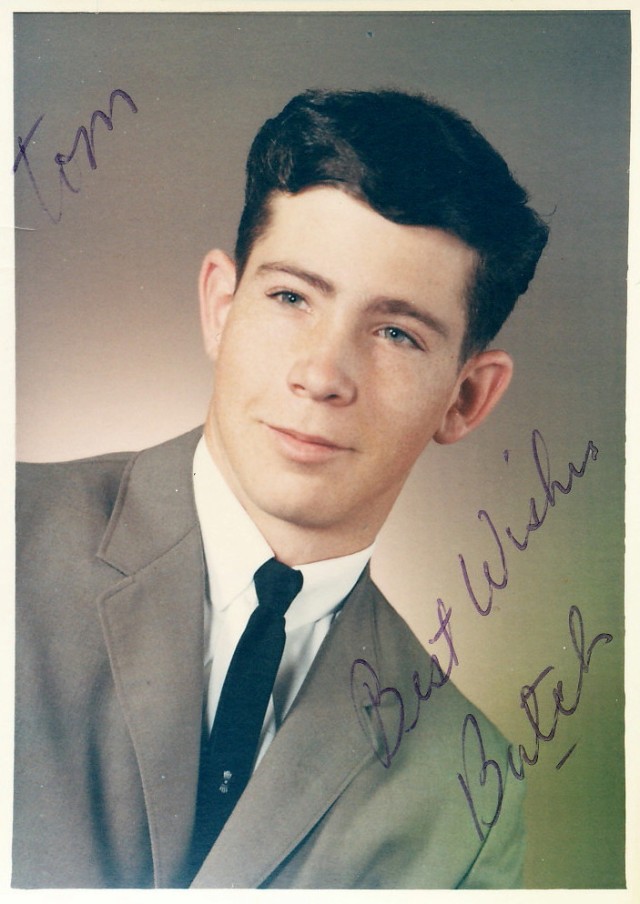 [“Tilt.”  The name given by my sister because of the angle of the photo.]

[Mike.  Kicked my butt at chess in the JHS cafeteria.] 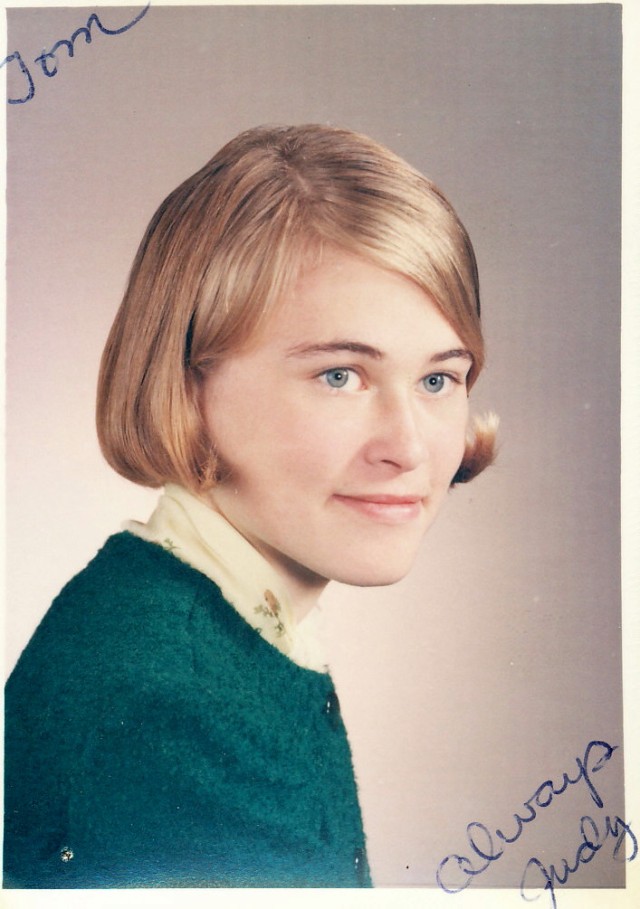 Apparently (is anyone counting “apparentlys”?) these were the only classmates who could be bribed into exchanging class photos. 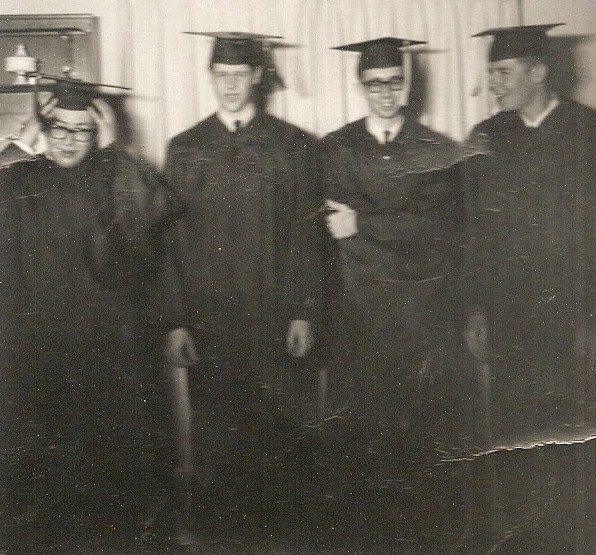 [p.s.  Brad, Greg, Tom, and I were voted most likely, as a group, to have an affinity for pocket protectors.]

[Certainly a highlight of my intramural athletic career at the ‘U.’  I remember Rog Erola (from the Minnesota metropolis of Deer River, along with his 6’6″ older brother Ray) was part of a marauding group in the one and only panty raid I can recall – he returned from Comstock Hall with a pair of panties on his head.  He was so proud!  The tongue-in-cheek reference to Gary Mertz at the end leads me to suspect this may have been from a dorm newsletter (?) rather than the actual real campus newpaper, The Minnesota Daily.  Gary was not a ballplayer but was a trombonist in the marching band.  He was from Olivia, and somehow we both ended up in Okinawa when we were in the army (below).]

Some more sports as we head to the finish . . . 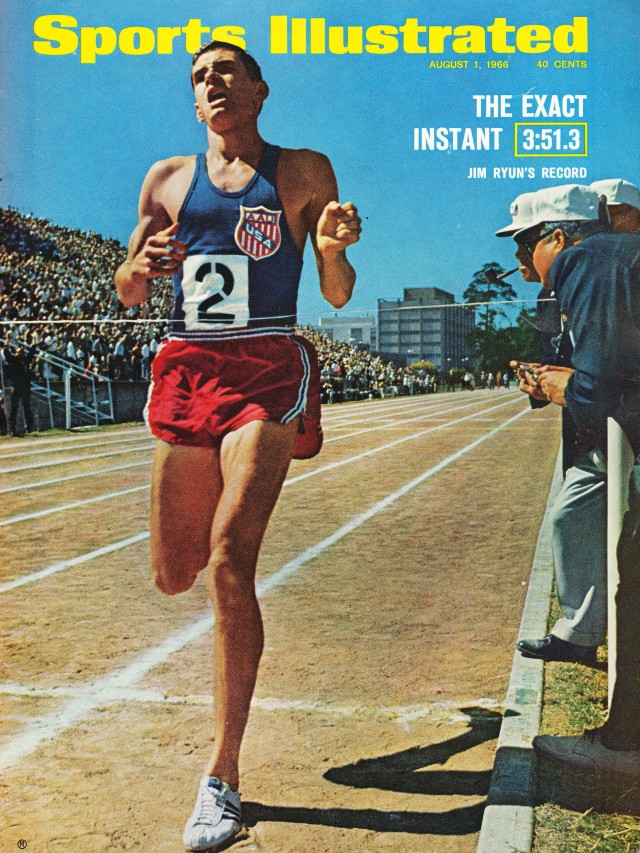 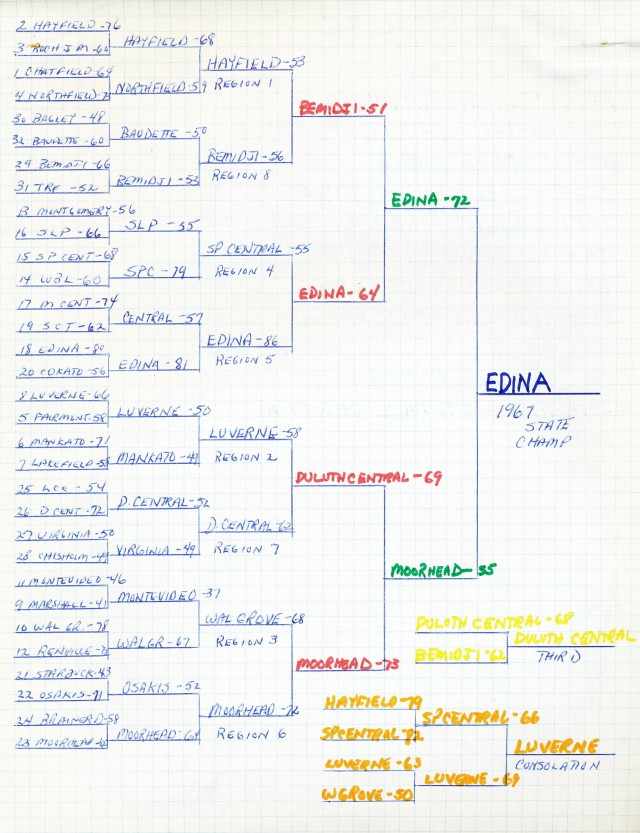 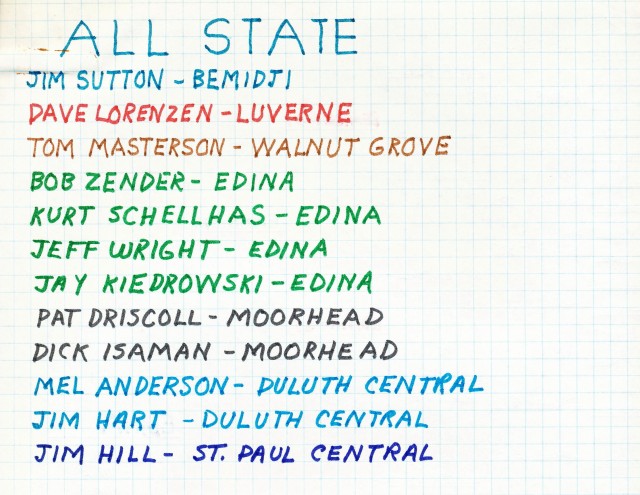 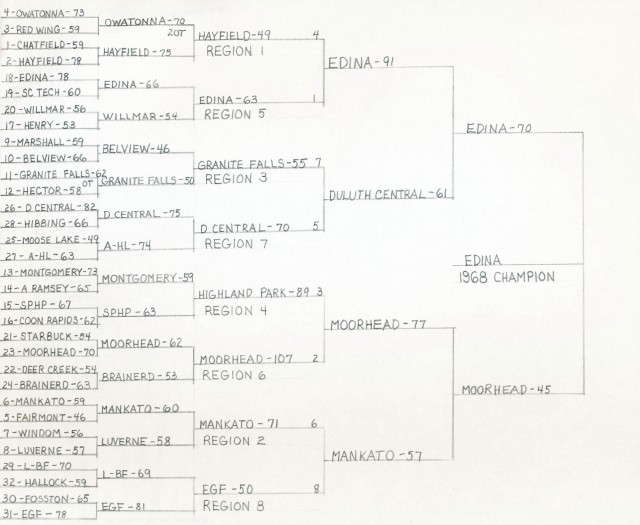 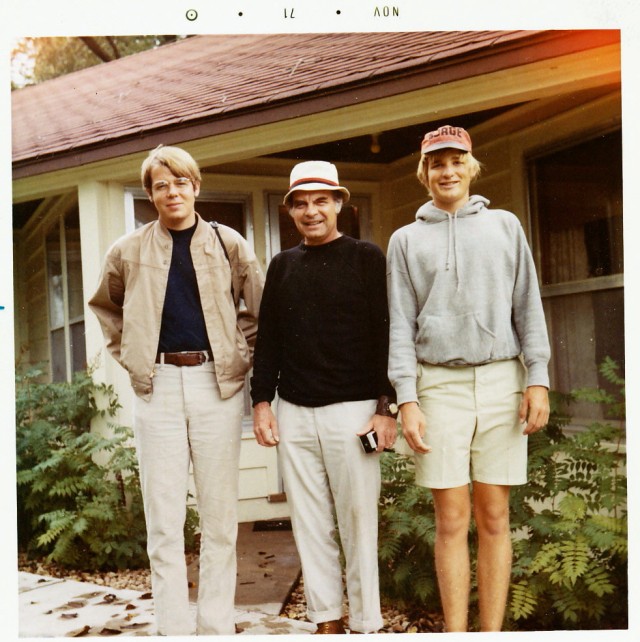 [On leave from Okinawa, August 1971.  With Dad and Cam at Lake Geneva.  I loved that jacket (an Obert male family tradition to prize such outer wear).] 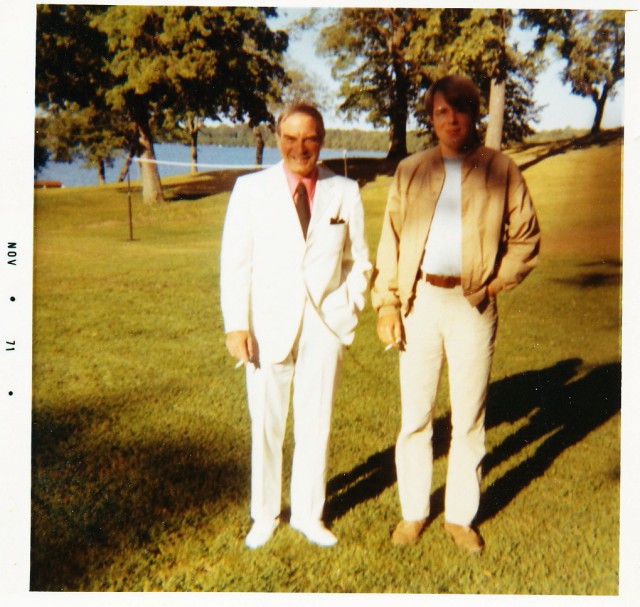 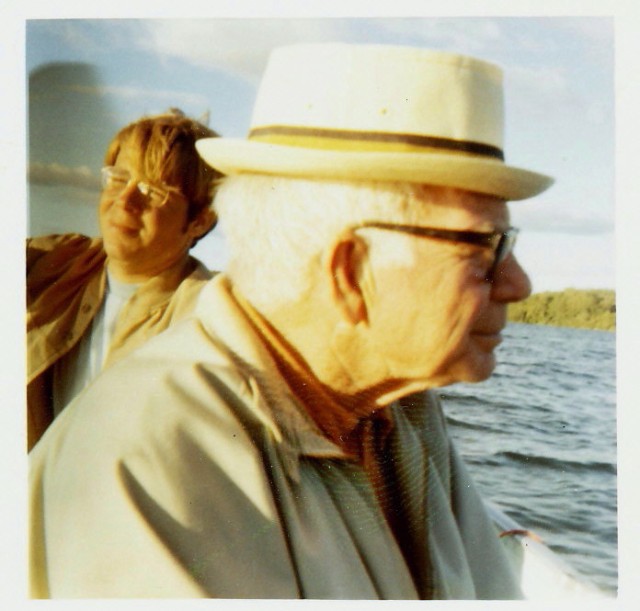 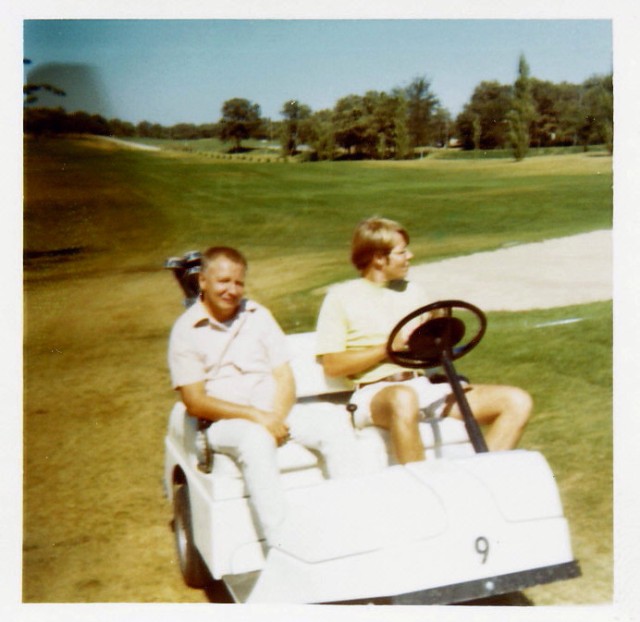 [Golfing, with Uncle Dick.  Do you recognize the 14th hole at the AGC?] 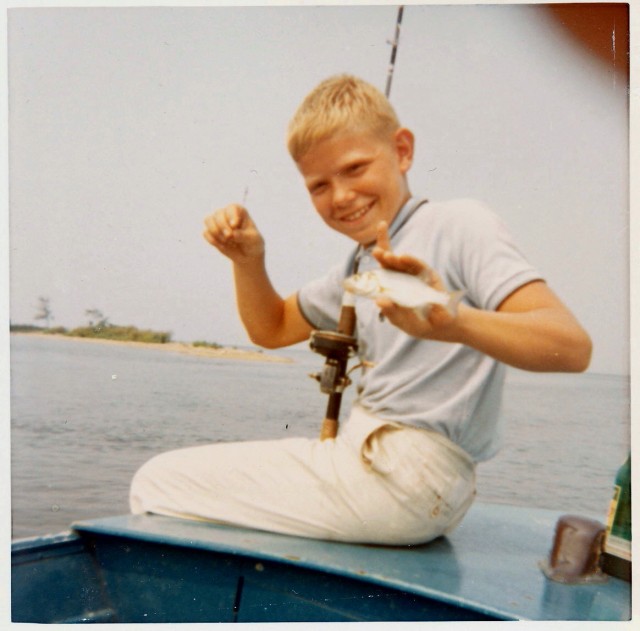 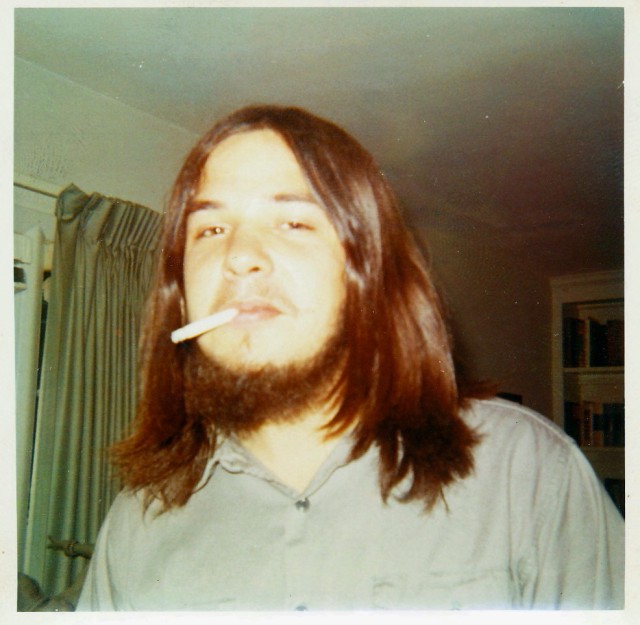 [Postcard from this era.]

[Hey, I was born for less than a 100 bucks!  But Mom was in the hospital for five days – standard practice in those days?]

[When I first saw this, I thought I had an unknown criminal past?  Then I saw the collar insignia (Specialist 5th-class) and realized it’s just a military ID photo.  😉 ]

Hang in there – we have a girls’ hockey game Thursday night!

[EDITOR’S ERATA:  WordPress has been changing its use procedures for the past week or so.  That’s very upsetting to a person on Medicare!   So I have accidentally deleted the “background” photos for the posts going back to the start of the hockey season.  You can still save the photos as they appear in the posts by right clicking and “save us.”  It’s just that now when you double click on them, you can’t get to a larger format.  If that’s an issue for a photo you’d like to save, just let me know.  All the other posts should be OK in terms of double clicking to a larger format.  Please excuse the incompetence,]

1 Response to The Supervisor Made Me Do It