Over the River and Through the Woods . . .

Do you remember the scene in Dances with Wolves when the ground shook with the coming of the bison?  Well, I guess you had to be there.

Fellow Super Fan Bob “Weakie” Annen and I have talked for years about going to what this year was the 40th Annual Alexandria Lions Cross Country Meet of Champions, particularly during the long and illustrious career of now Golden Gopher Jamie Piepenberg.  It is considered one of the elite cross country meets in the state, Arrowwood Resort provides a great venue, and top teams from all over the state participate.  Well, we never made it before because with age and girth a certain amount of inertia sets in at times.  “Weakie” still couldn’t make it, something about allergies, but I decided this was the year, despite layer-up weather.

There were 24 teams, many from the giant metro schools, and with races for boys and girls JV and varsity there were probably 1,500 runners!  Throw in coaches, parents, hangers-on, roadies, entourages, bus drivers, volunteers, grandparents, vendors . . . well, you had lotsa people out there!  Being the perceptive fellow that I am, I figured parking would be an issue.  Door-to-door, it’s 1.2 miles from our place to Arrowwood – though I already had had my 5-mile walk with the Fat Boys earlier in the morning, I figured walking to the meet would create the least amount of hassle.  I did not take into consideration that 4 layers of clothing would give me hot flashes enroute.

[Parking for the event extended to the stables pasture, about a half mile away.  I passed it as I walked to the race site.  They shuttled people to and from this “lot.”]

I went to see the Alex girls’ varsity (don’t we always?) which features freshmen twin sisters, Bethany and Megan Hasz, who are ranked 4th and 5th in the state, respectively.  In fact, 10 of the top 12 girls in the state would be entered in this race.

[As I turned in, I could see activity on the golf course.] 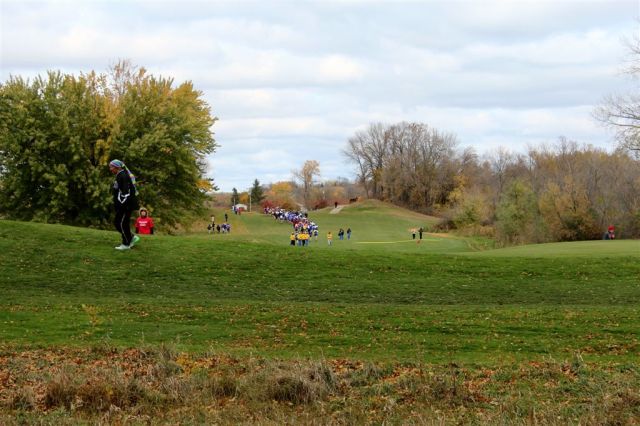 [I ran across a pelaton heading up a fairway – these were the JV boys, about 500 of them.  I learned later Stillwater almost completed a clean sweep as they finished 1, 2, 3, 5, 6 – or something like that – and have 40 runners in their JV program.  And their boys’ varsity team is ranked 16th nationally.  I presume this all involves metro-area open enrollment.] 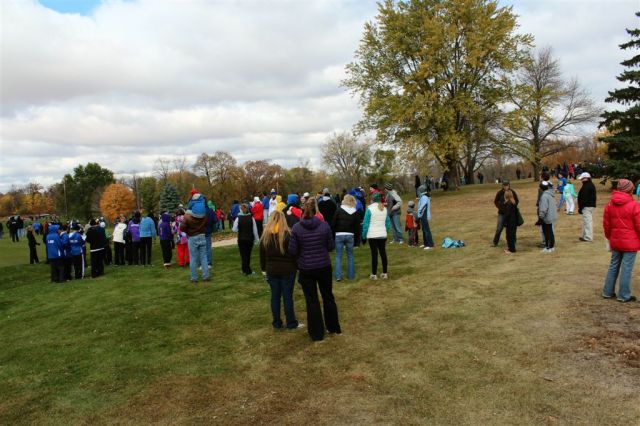 [I had no idea where I was on the course, where it started or ended, so I hoped to find someone in authority . . . or at least the Dittberners or Marnee’!]

[Camping?  Well, I learned every team had a tent on site.  Made for colorful surroundings.]

[Watch out!  Here comes a thundering herd of JV boys, stoked on the energy of coming of age.]

[I tried to stay out of the way while still trying to find my way.]

[There they go – but, aha, maybe some people who can give directions?]

[Past the purple tent, which I believe was Cretin-Durham Hall from St. Paul.]

[Past Monticello, which I believe is the top-ranked girls’ team in the state.]

[To the Waterpark, which I’m sure got plenty of business over the weekend!] 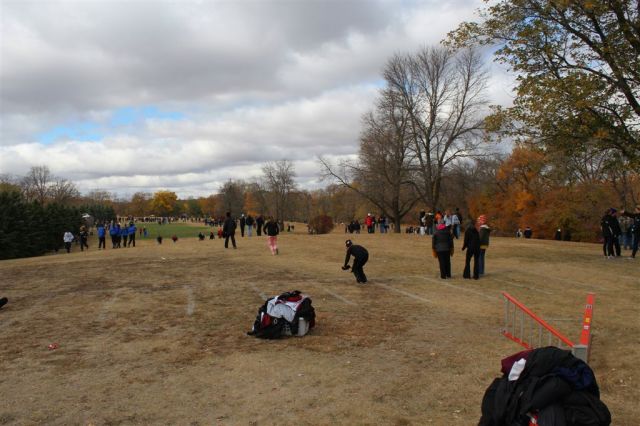 [The fans began working their way back to the starting line.]

[I had 10 minutes to kill, so I nosed around my immediate area.  Here was something new!  I had no idea these were back here?  As I said, we only live a mile from Arrowwood and they snuck them in right under our noses.]

[But back to our new story line.  These are “The Cottages,” and they started building them last fall for opening this summer.  They’re where the old storage pole barn used to be and across the lake access road from the log townhomes.  In fact, if you notice the Arrowwood photo at the top of the story, it’s from their website and still includes the pole barn (upper right).  😉 ]

[Looking from The Cottages through The Townhomes toward beautiful Lake Darling.] 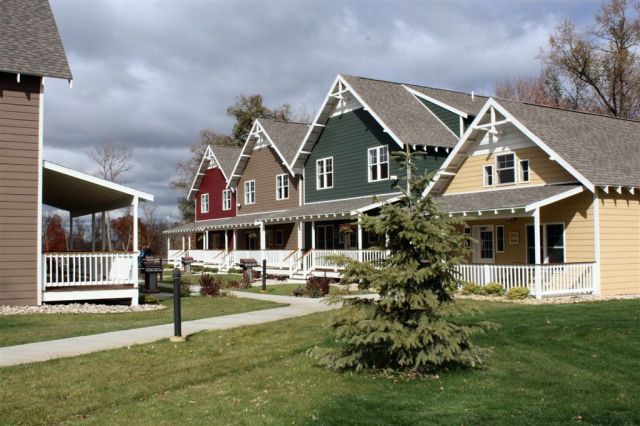 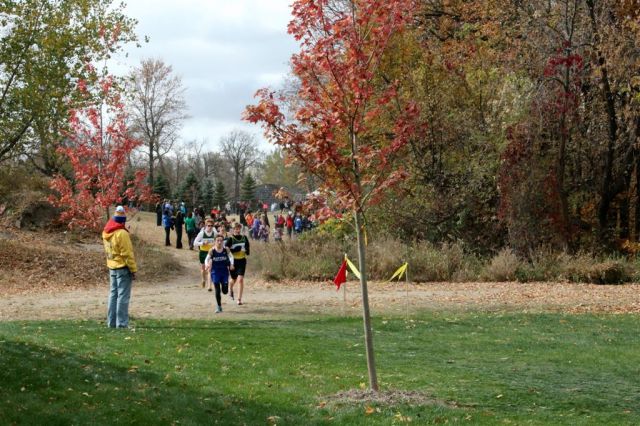 [I walked through The Cottages’ “main street” and came out upon . . . a cross country meet!]

[Looking back toward the lake from the end of The Cottages.] 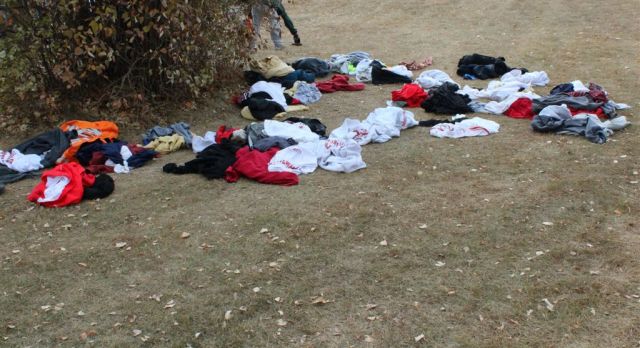 [Everywhere I roamed I found these.  I believe cross country runners must shed?]

[Back at the starting line – it was somewhere around here I ran into the Dittberners.]

[The teams were beginning to assemble – the Waterpark in the background.]

[Does anybody in the audience know this Colvin?  Echo Press columnist, Jo Colvin, said she has never met any other Colvins in the immediate 5-state area?]

[Fans, run for your lives or you’ll be trampled!] 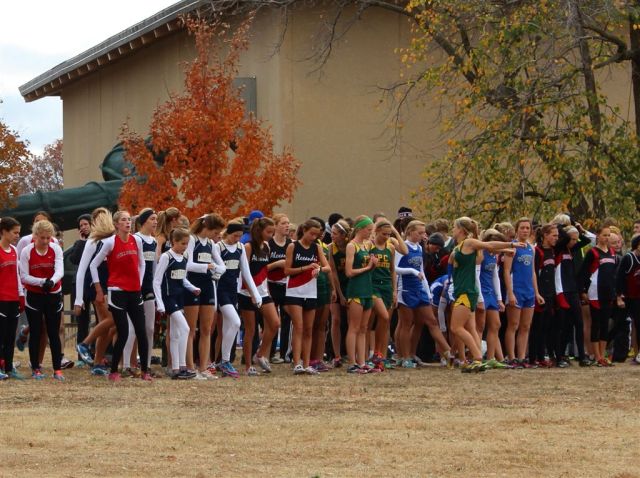 [Megan and Bethany ready to hit the “start” button on their watches.]

[By pure dumb luck, I captured the Bemidji runner, sophomore Jenna Truedson, who is ranked 2nd in the state, as the 168 participants raced by.] 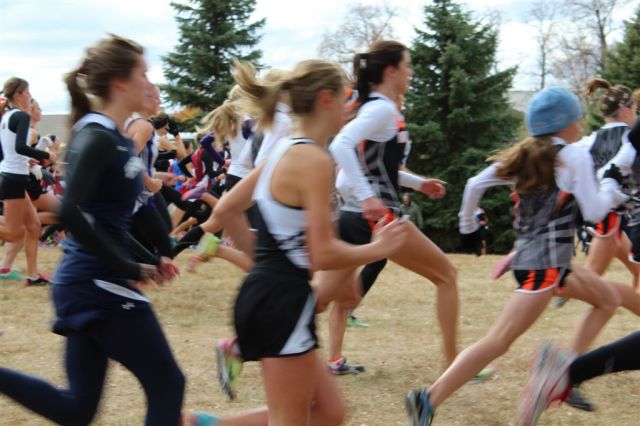 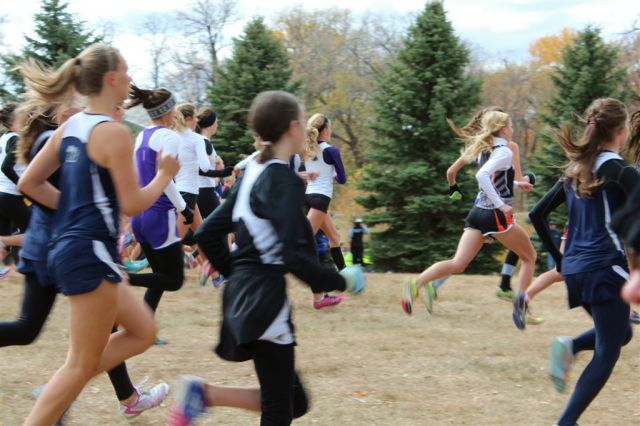 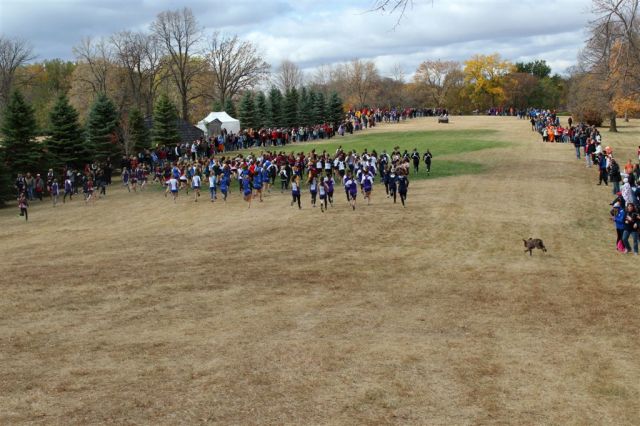 [A canine joins the fray!] 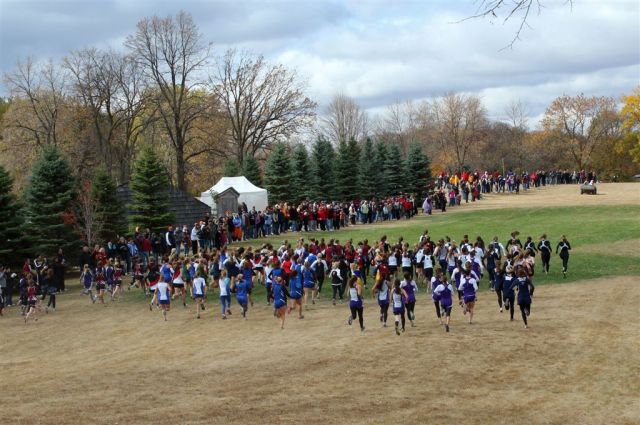 [The pack heads to the first turn – the dog is gaining!]

[I ambled down to that corner where I was told the race would pass two more times.  I ran into a couple of local fans there.] 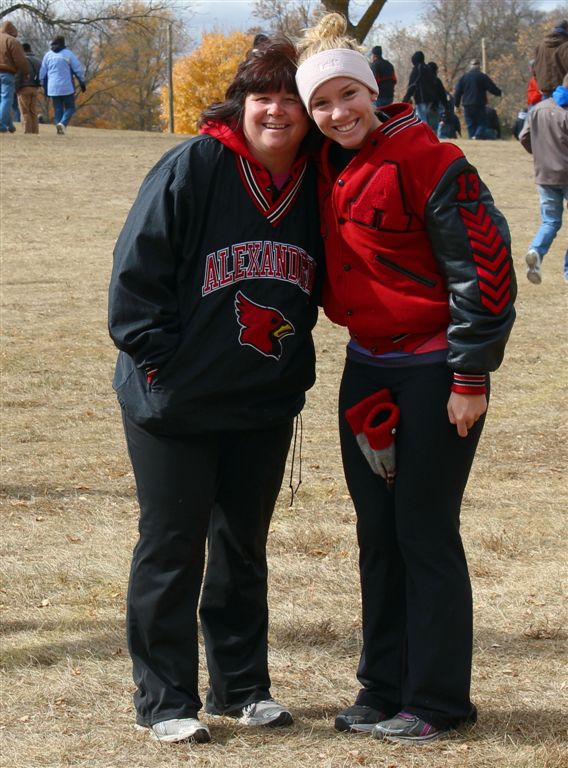 [Marnee’ and Shanee’ Herd, fabled in song and story.  Shanee’s letter jacket looks like that of a 30-year army sergeant’s.  I don’t know if the hashmarks signify longevity, but she has been varsity lettering for 6 years!]

[Here they come on their first pass by our first vantage point.  There is no way as a novice I’m going to be able to properly identify Bethany and Megan, but at this point one of them has a slight lead on Truedson.] 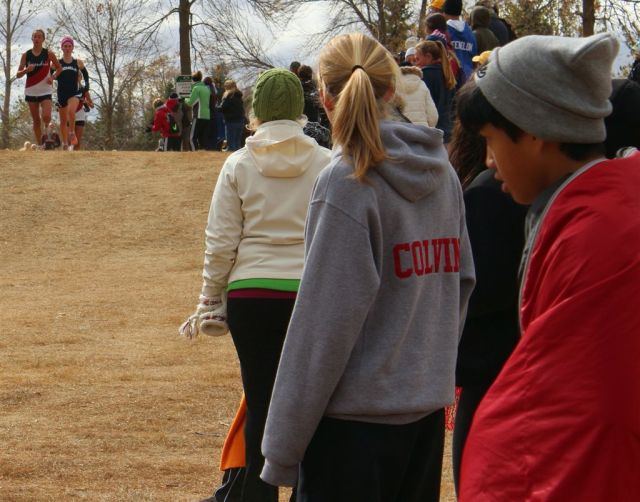 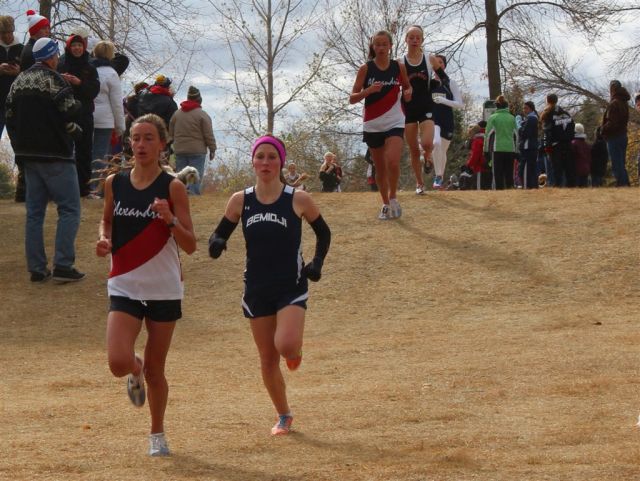 [The Hasz sisters were bracketing Truedson.  Runners used to wear numbers – now they all are identified by a digital chip (I don’t know where they put it?), so everything is electronic.  Doesn’t help spectators on the course!  😉 ] 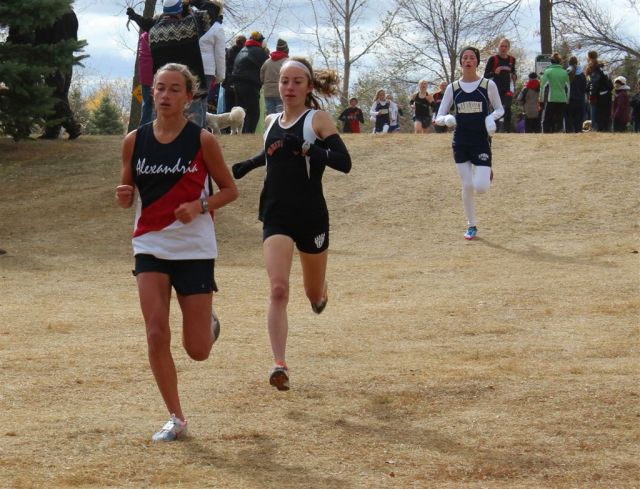 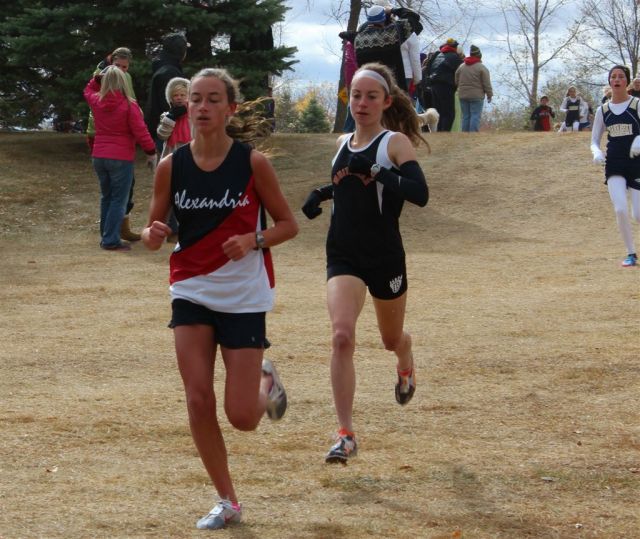 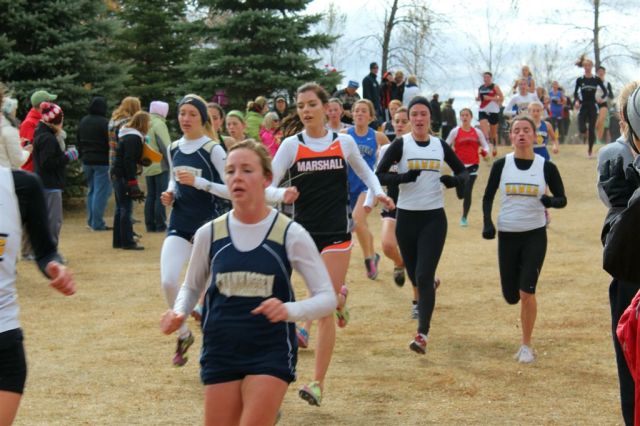 [And here comes the pack.]

[In the blur of humanity, I may have missed someone, but here’s Julia Sieling, Carol and Dave Dittberner’s granddaughter, the 3rd Cardinal to pass by.] 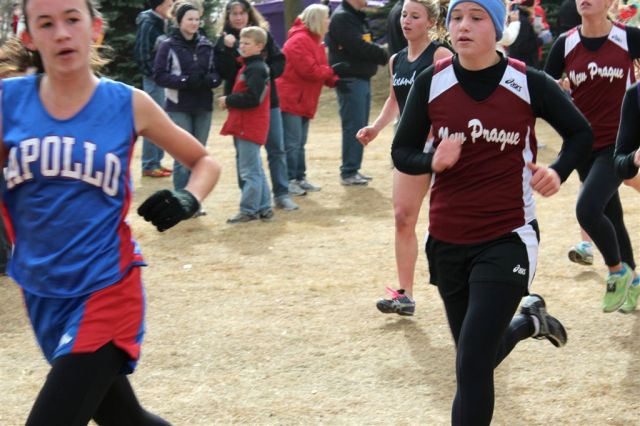 [Is that the Cards’ Karly Betterman, partially hidden behind New Prague?]

[Monticello girls are No. 1 because of their depth.]

[I somehow missed Emily Thul, but I’ll get her during basketball season.]

[I was advised to head for the finish line after the first pass to make sure my ambling would get me there on time.  I passed the Alex campground in route.] 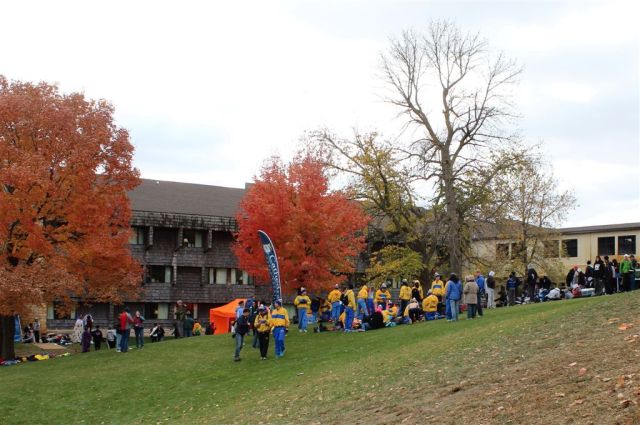 [I ran across more campgrounds behind the Waterpark.  I had to walk a narrow, steep side hill path to get there and almost lost it on some slippery rocks.  The following headline flashed through my mind:  Old Man Tumbles Down Hill, Perishes, at Cross Country Meet.] 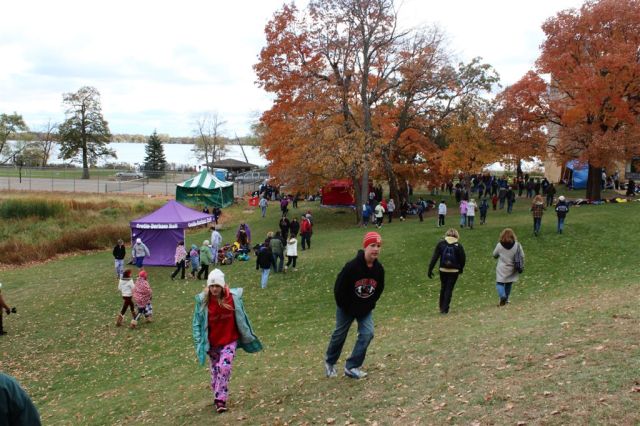 [The finish line is in sight – you can get an idea of the side-hilliness of my endeavor.] 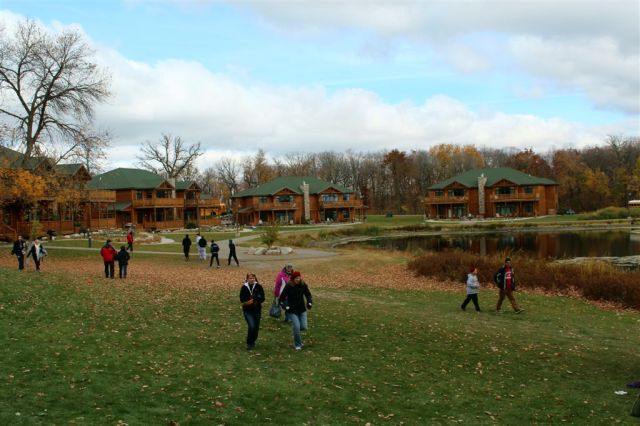 [From the lakeside of The Townhomes.] 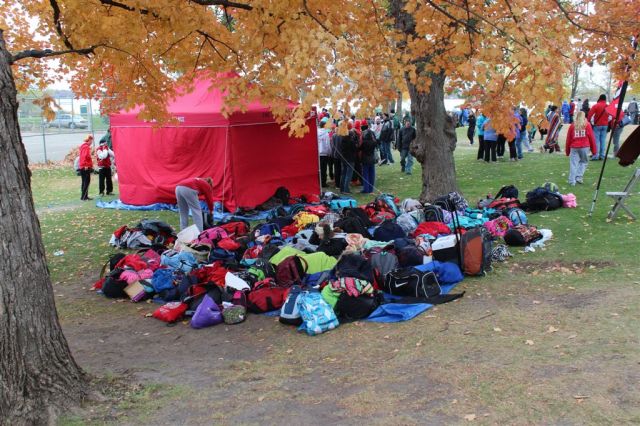 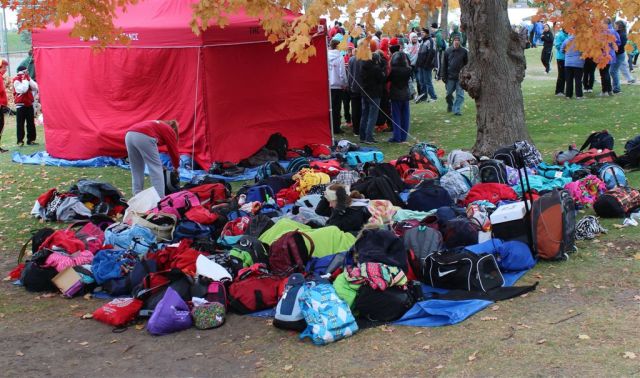 [Upon further review, there is a person nestled down in there!] 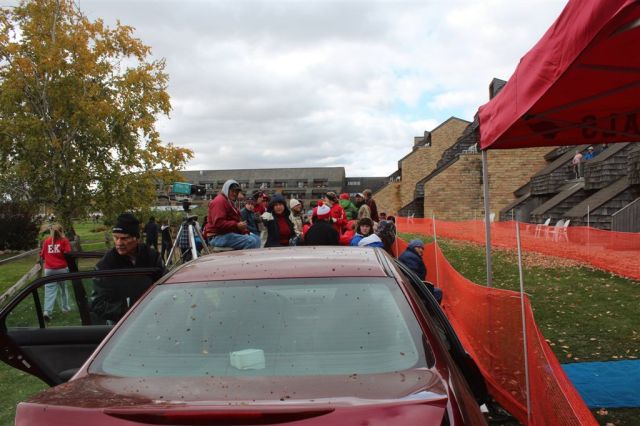 [The Dittberners saved me a spot “in the front row.”  It’s always nice to have a press pass.]

[Dave and Carol – they really get excited about these meets!!  🙂 ]

[Uh-oh!  Heading to the finish, Truedson has a lead on the Hasz sisters.]

[Here comes Shelby Iverson, Homecoming Queen and hockey captain, as the 3rd Cardinal to cross the finish line.  I missed her on the first pass.] 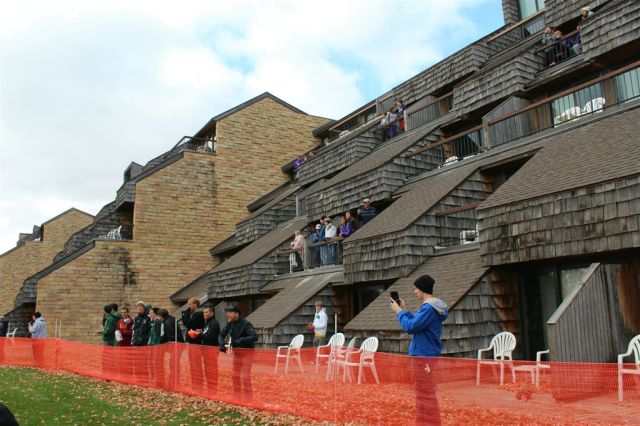 [Long-timers to the meet know to get rooms with balconies overlooking the finish line.]

[Did I lose Karly (?) behind another runner again?  Emily’s right behind her.]

[Emily was a blur at the finish.]

[Shelby’s dad holding court in the middle of the crowd.  🙂 ] 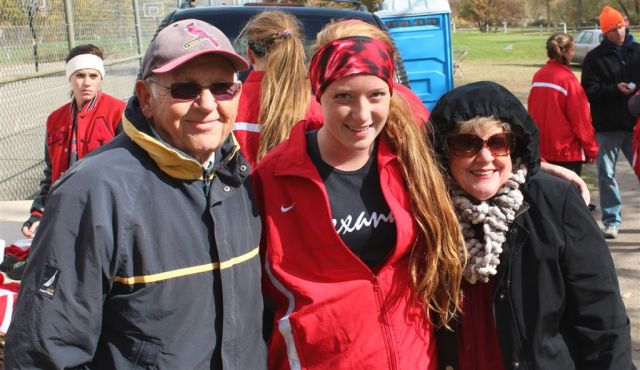 Congratulations to the Lions and all who put this meet together.  The logistics must be incredible.  I will look forward to more meets in the future.

[The Dittberners, who had VIP parking, gave me a ride home.  😉  Finally, a touch of sunshine provided a photo op of the driveway’s red maple.]