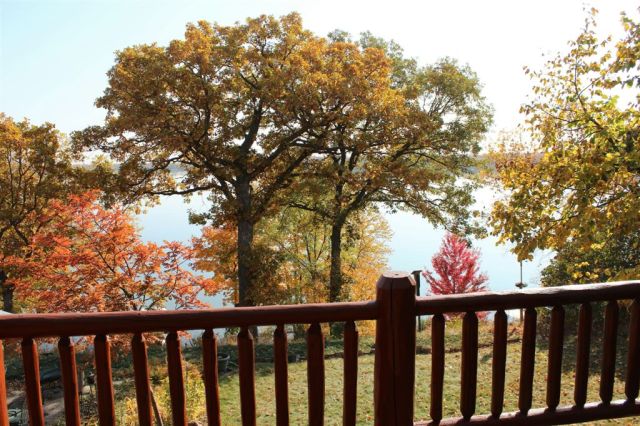 Last weekend was a gorgeous weekend for leaf viewing.  I took a few photos around the yard on Saturday, and on Sunday we took the Moby Obie out for its final ride of the year (and forever?).  It was almost too hot Sunday – the temperature was in the 80’s.  We had promised Pris and Paul Fieldhammer, who had taken their boat out earlier, we would take them for a leaf cruise; and we owed Beryl and Don Waldeland more than just a boat ride.  Beryl and Don drove over, we launched the Moby, and picked up the Fieldhammers in route.  There was lot going on that day – Paul kept us apprised of what was going on both in the Ryder Cup (a loss) and the Vikings’ game (a win) with his new iPhone (I think that’s what it was?).

We weren’t sure how long we would stay out, or how far we would go, but Ruthie packed a lunch and all did a BYOB.  The water levels are really low – we had to rock the Moby out of its lift before anyone could get aboard.  And we were concerned about the depth of water in Darling-Carlos channel – but it was fine.  So we slowly motored all the way to Carlos State Park on the North end of Lake Carlos – and I think all the lake photos are on Carlos.

[Our patio is a tad overcrowded.   We had to bring all the furniture down from the decks when they were stained and didn’t see any point of putting them back as the season’s over.  The European mountain ash in the foreground looks good though!  😉 ]

[A first peak at the house’s new stain job.  Our bedroom deck – a great place to sun bathe au naturel, if one were so inclined.]

[The red maple in our driveway circle.  It is now totally red – I’m waiting for good lighting!] 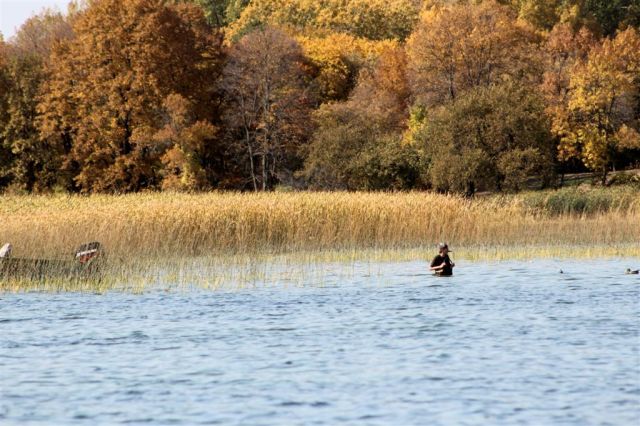 [It’s now Sunday and we’re out on Lake Darling.  A guy placing duck decoys – right in front of Arrowwood?] 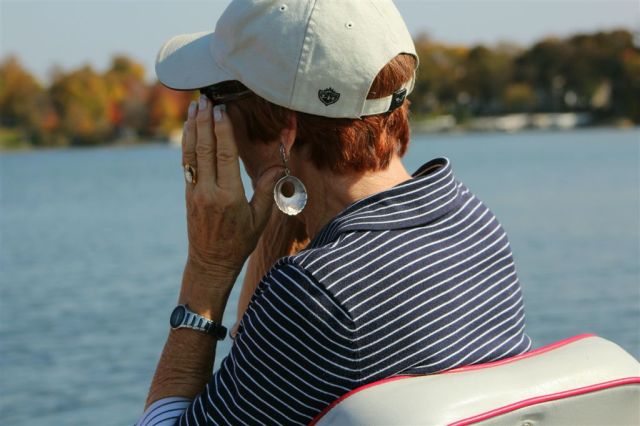 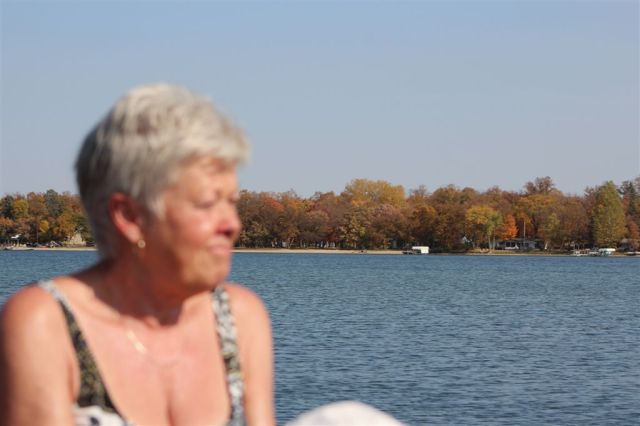 [The supervisor decided she could still work on her tan.] 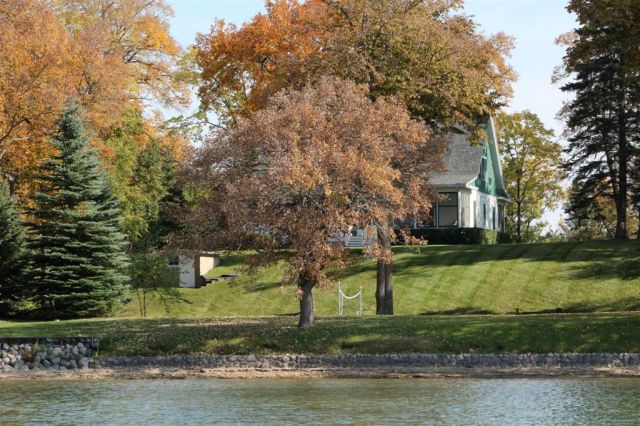 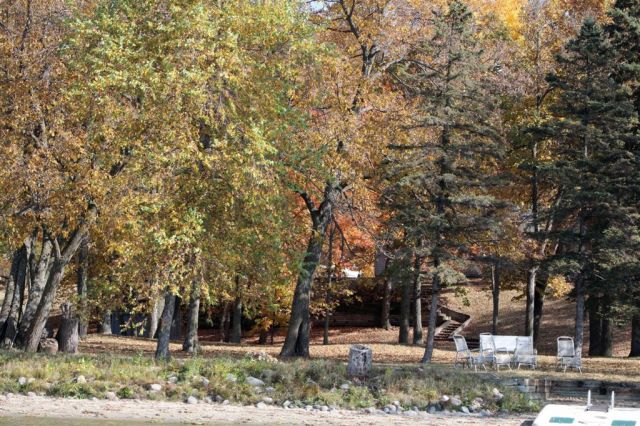 [The guys said the water was fine.  This is the “take-out” process.] 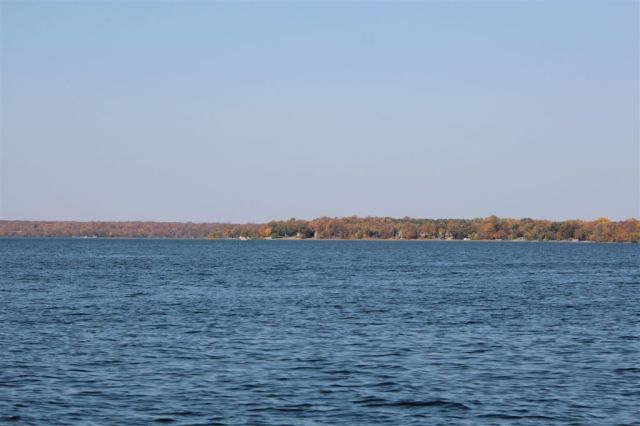 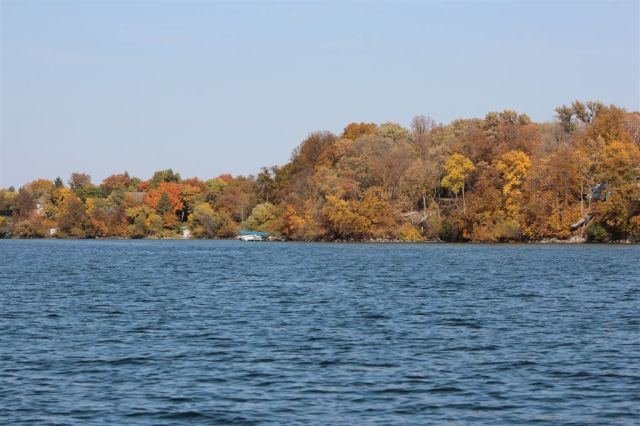 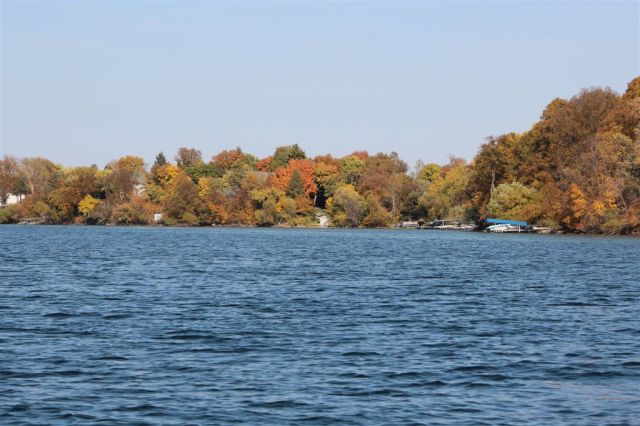 [Pris, the supervisor, and Beryl discussing something totally different from what the boys in the back of the boat were discussing as we’re driving to the northern side of Carlos.] 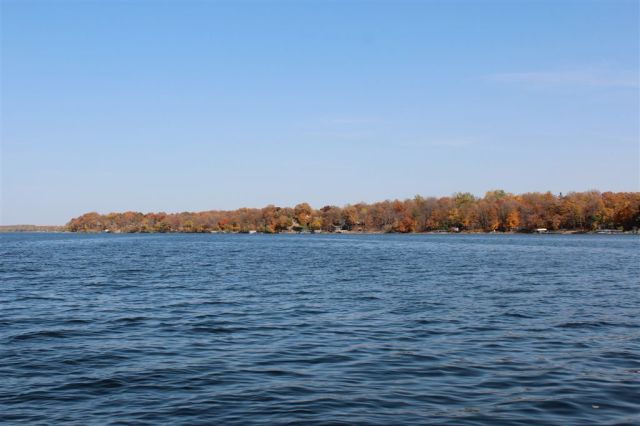 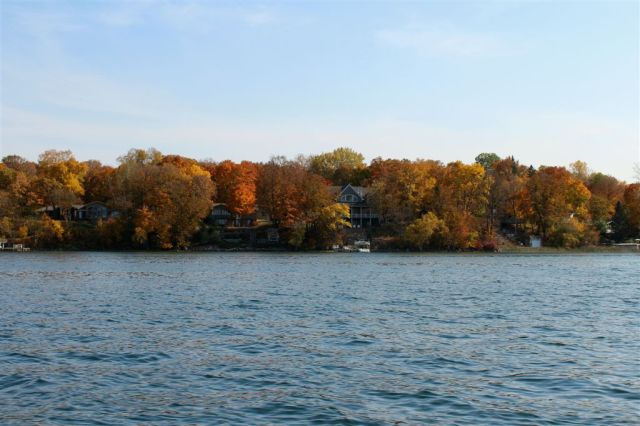 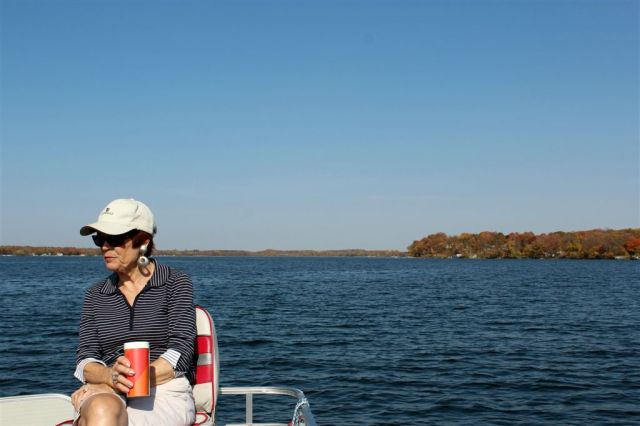 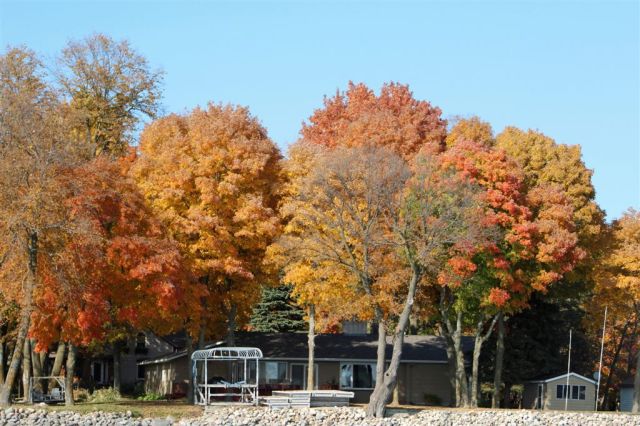 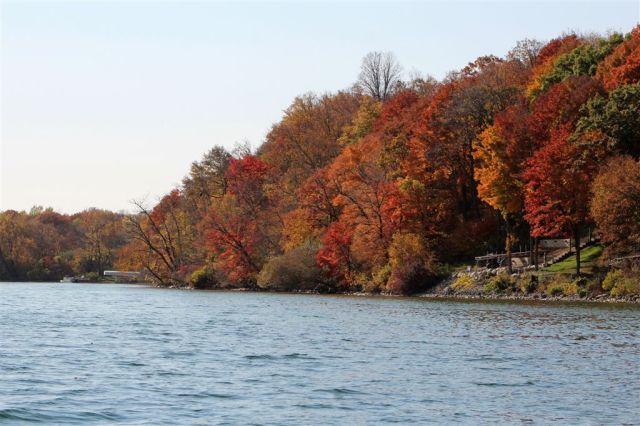 [Now heading back south down the western shoreline.]

[Normally identifiable by a 49ers’ flag.]

[That point on the western shore across the lake from the Carlos-Le Homme Dieu channel.  We were out for almost three hours and must have then been in a hurry to get home.  This was the last on-the-lake photo.] 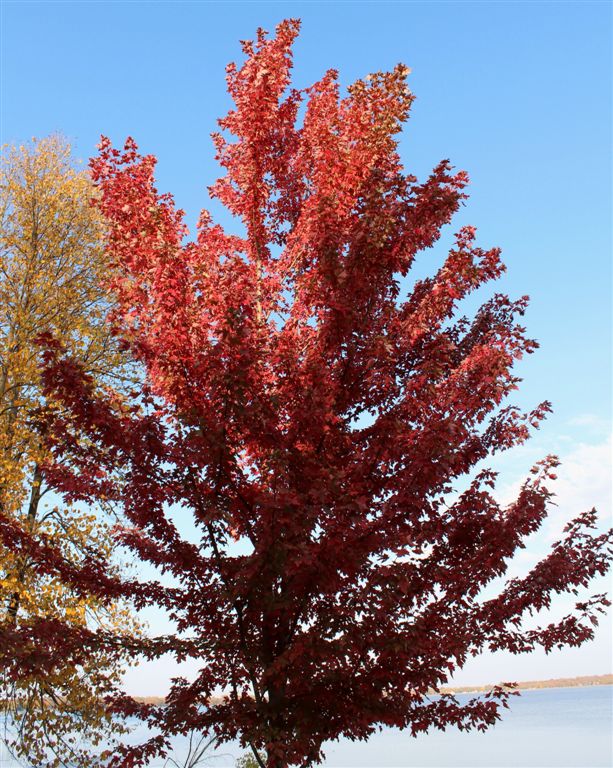 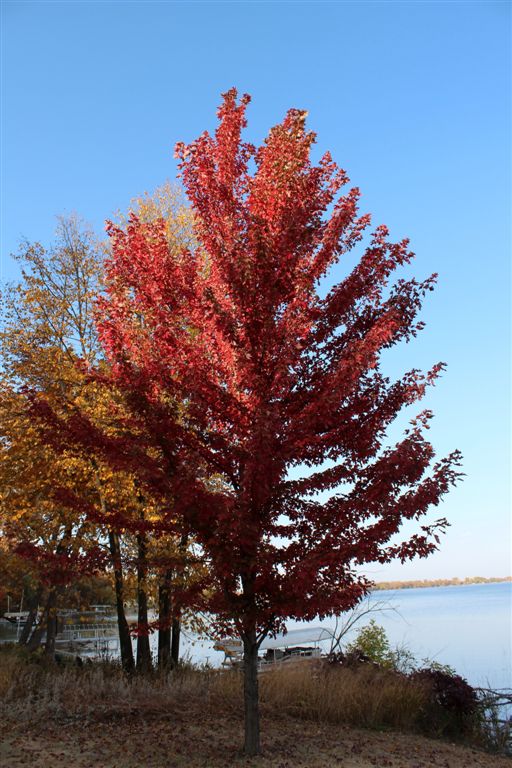 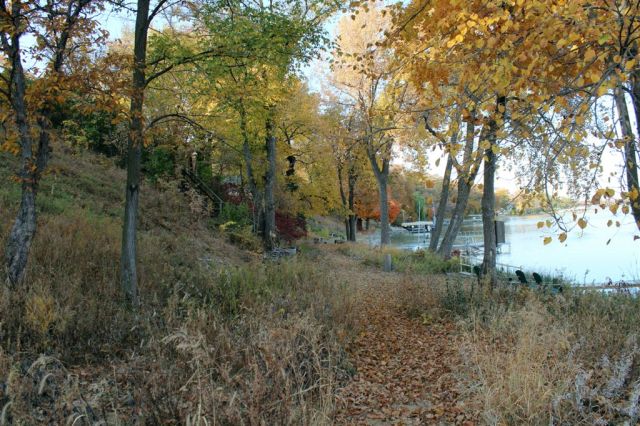 [Looking north up our shoreline.] 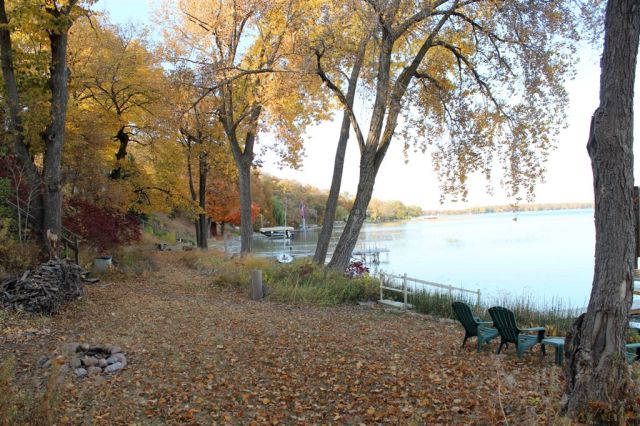 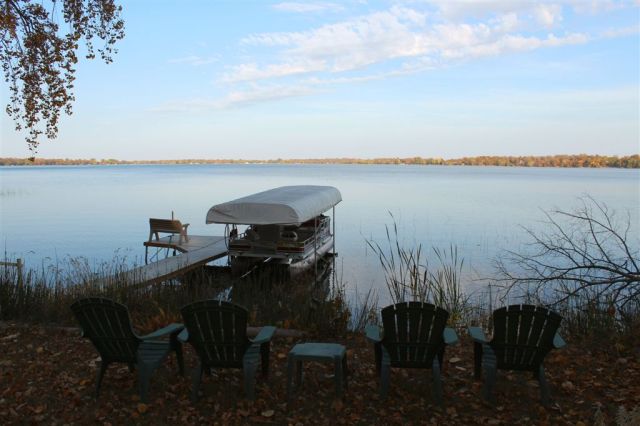 [The Moby back in its resting place.]

[The home from lake level.]

[The pontoon and dock came in on Wednesday.]

[Good-bye to Lake Darling until next spring.  (Drat, still have to take in the lake pump.)]

[Climbing up to the house.]

[Planning on putting on the market next year . . .  It’s time to downsize.] 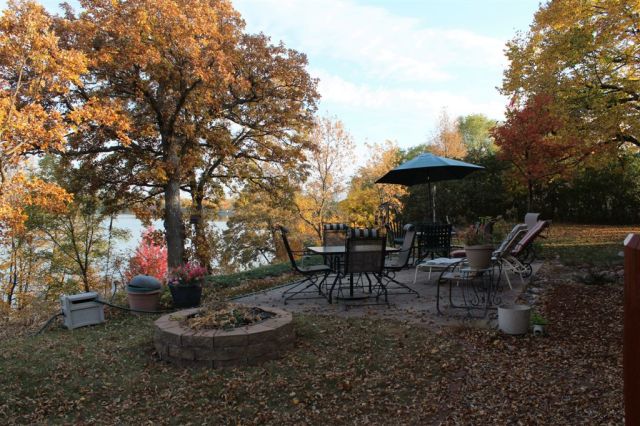 [Our basswood on the South side of the house – tallest tree on the lake?]

[The Lee’s Norwegian red maple “points” to a fisherman.]

[The supervisor’s front door garden – since lost to the first frost.]

We’ll wrap up this year’s version of “Autumn Leaves” with the above contribution from the HQ on Lake Minnetonka.  Thanks, Kath!  🙂  Obviously inspired by the cub reporter, she has been entering photo contests!