Hi!  Yeah, we’ve been “away” for a while.  Company.  Here.  And while we’ve been “here,” we’ve heard from other people who have been “there.”  We’ll get “there” some day, they’re all on the bucket list.  But for now, we have responsibilities “here.”  Lotsa stuff to cover “here.”  The “there” above was provided by Roogggggg, the recently retired and regular traveler writer from the East coast.  It was on his Banff trip – soooo, it’s either Banff or Lake Louise.

[Rog subsequently advised it’s Lake Louise – and did not chastise me for not knowing the difference.  In keeping with the “there” theme:  Reading you from Siena Italy. ~ Diane OB]

But back to our story line . . . oh, with this quick stop.  As you recall, I missed the 2nd home volleyball game – without a written excuse from my mother.  But the staff photographer has returned this year – despite now being an empty nester – and provided coverage of the Sartell game (below) and in a later by-line: 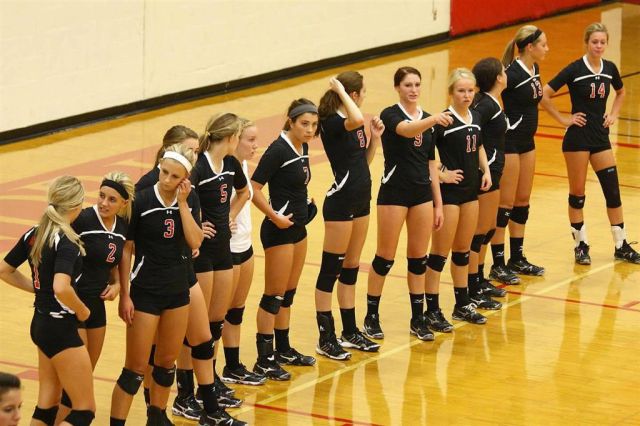 It was a sign.  Company had arrived from Indiana with strict instructions they wanted to cruise the entire Chain of Lakes.  Well, those you can get into by pontoon.  The forecast for the morning (Tuesday) after their arrival called for high winds with temperatures possibly approaching 90.  Although they would be here the rest of the week, better the devil you know.  We decided to make a break for it!

[It looked like a fishing contest coming out of Arrowwood.] 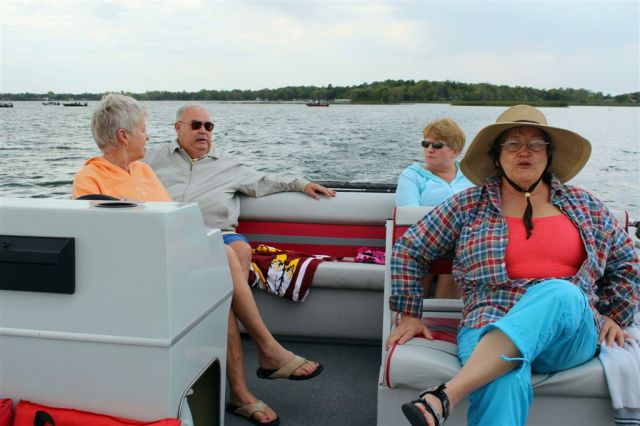 [And it didn’t look like 90-degree weather as Scott, Vickie, and Rita were dressed for fall.]

[The signs were good.]

[We waved to the Seveys as we cruised the West side of Lake Carlos.]

[The weather looked iffy again as we looked back at Darling.]

[Then there was another sign over the Clint Eastwood chair.]

[Heading north toward the state park.]

[Then we saw some fall color – red Adirondack chairs!]

[The shorelines were ominously quiet . . ]

[The supervisor and Scott were determined to make it!  The marina at Arrowwood was closed for the season; and we subsequently learned, so was Carlos Marina.  We were monitoring our gas mileage!] 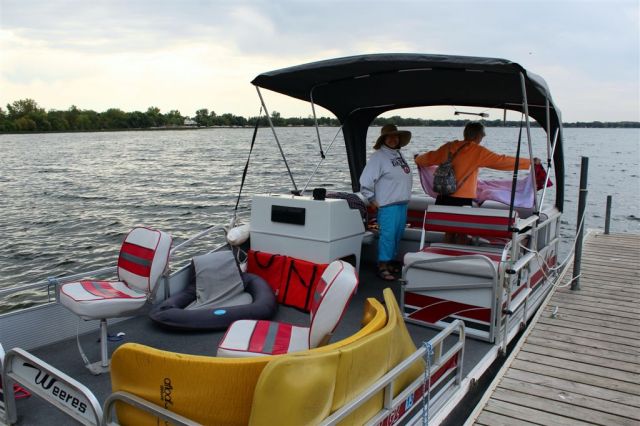 [Let’s eat!  Rita displays a fine sample of her “chopping!”]

[The Long Prairie River exits Lake Carlos on its voyage to the Mississippi.]

[Our excursion entered Lake Le Homme Dieu from Carlos, still with mostly overcast weather, and when we reached Tolena Point . . . an eagle!]

[It took several shots at maximum telephoto from a bouncing pontoon – some were not too bad.] 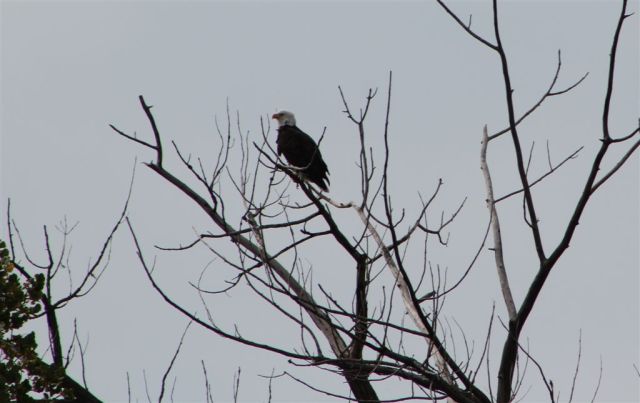 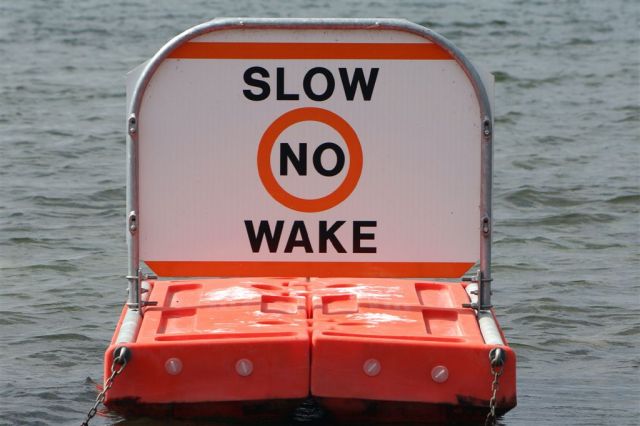 [And into Le Homme Dieu Bay – we were on our way to Bug-A-Boo Bay to wet our whistles.  Oh, and to go potty.] 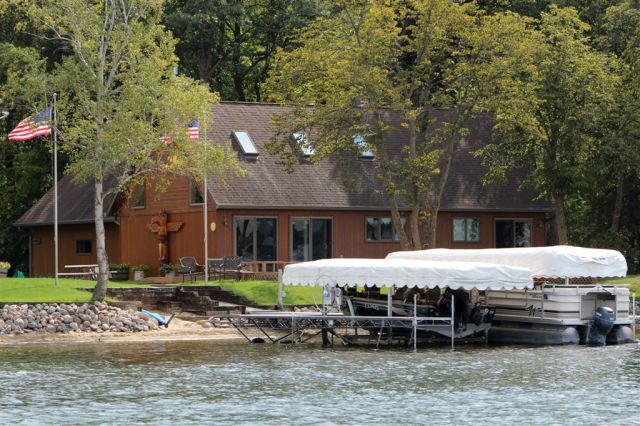 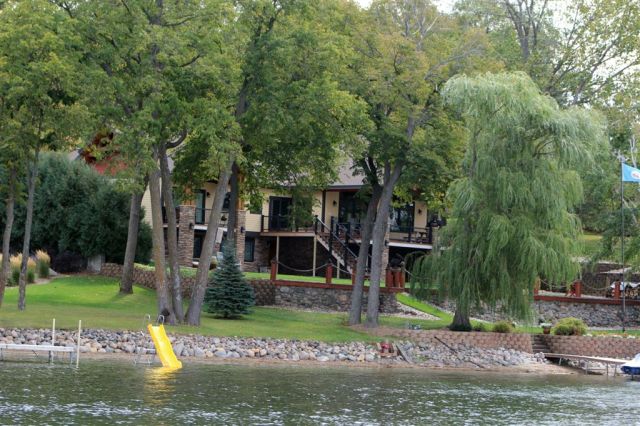 [Vickie and Scott were enjoying the ride – and the homes show.  They have a cabin on a 300-acre lake near Ft. Wayne – and with their sons, Brian and Kent, water ski all summer.] 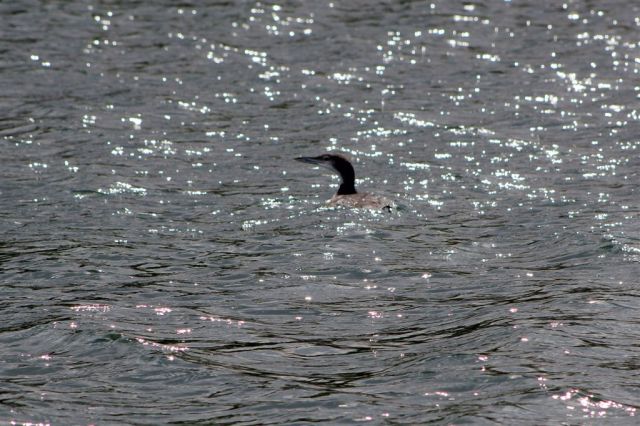 [After the eagle sighting, we ran into some loons – our state bird.] 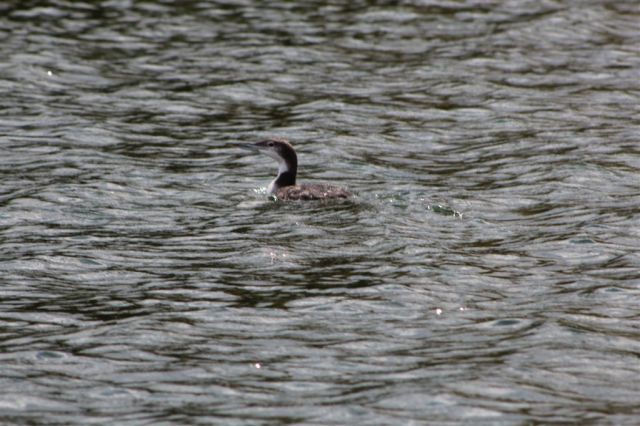 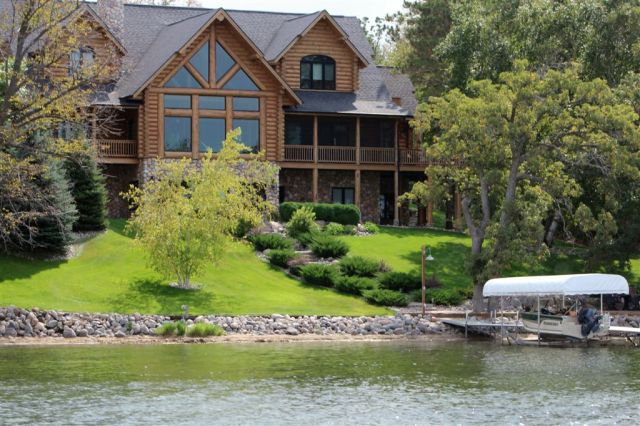 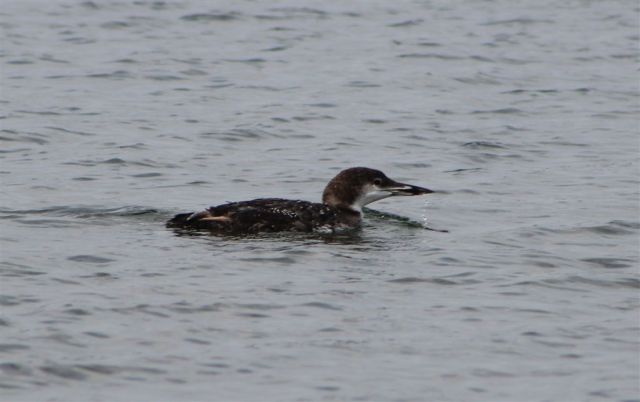 [And another nice lake home.] 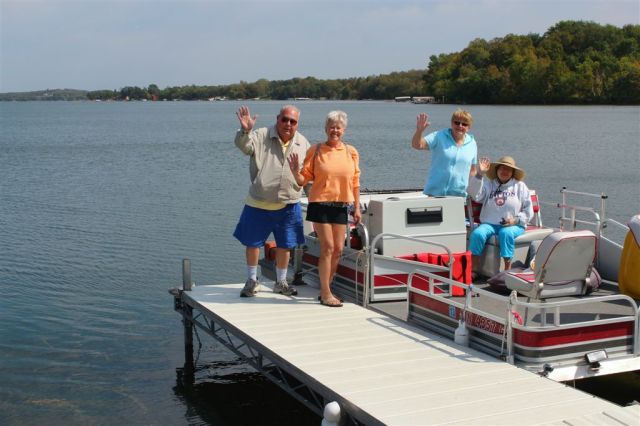 [We love Lucy!  Who knew Bug-A-Boo was her home base?] 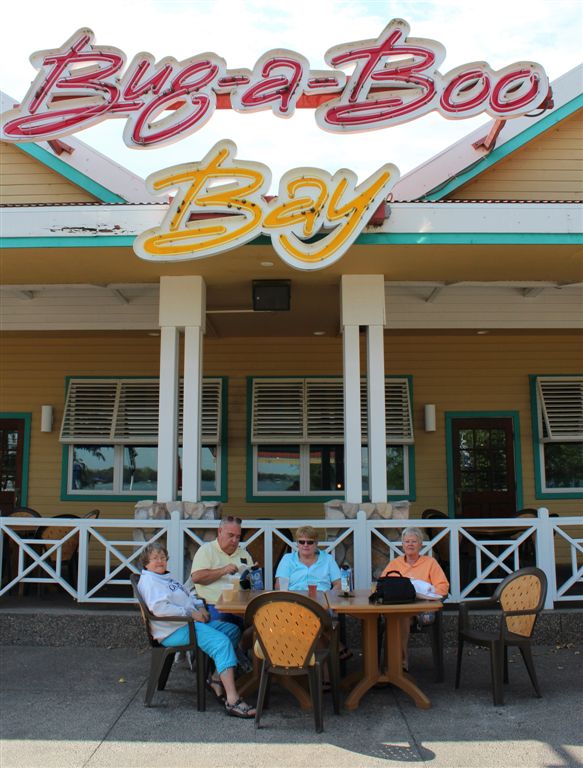 [It was a Tuesday afternoon – after Labor Day – we had the place to ourselves.  Such is the way of life in the northlands.]

[Another Alaskan Amber please!  Small – we’re on a boat!]

[Work has begun on the renovation/reconstruction of the old Wharf across the street.]

[While Vickie attempts to cross the street . . .] 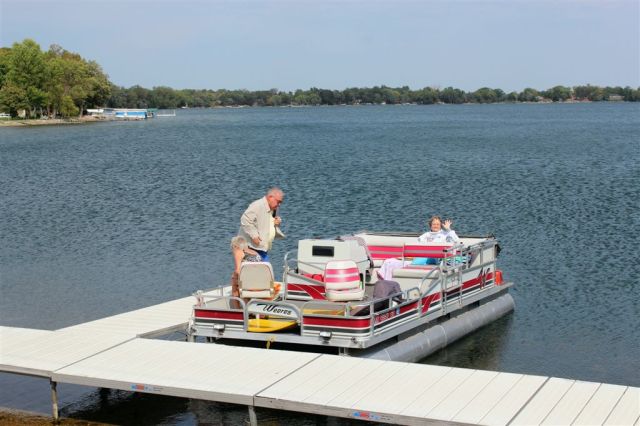 [The others prepare to cast-off.  Getting hot now!] 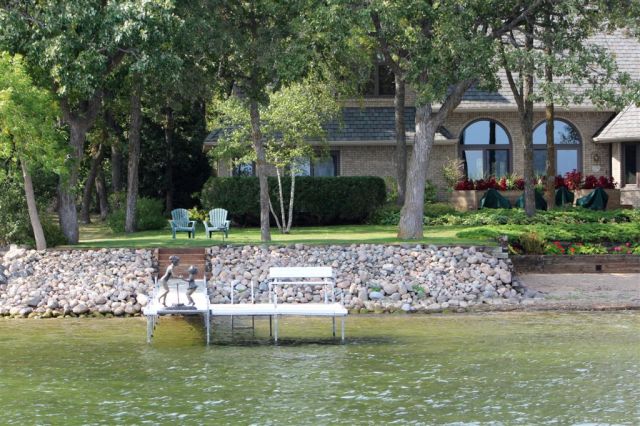 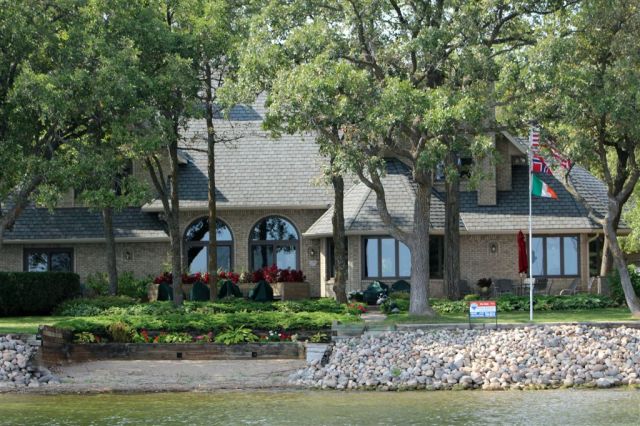 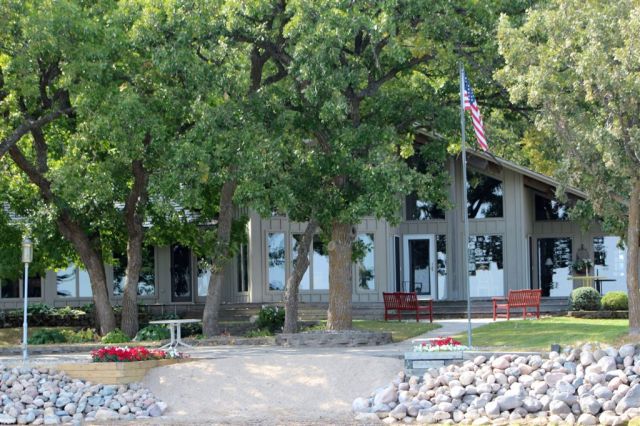 [Kinda what you think of when you say Alexandria lake home . . .]

[And a whole different take on Alexandria lake home.] 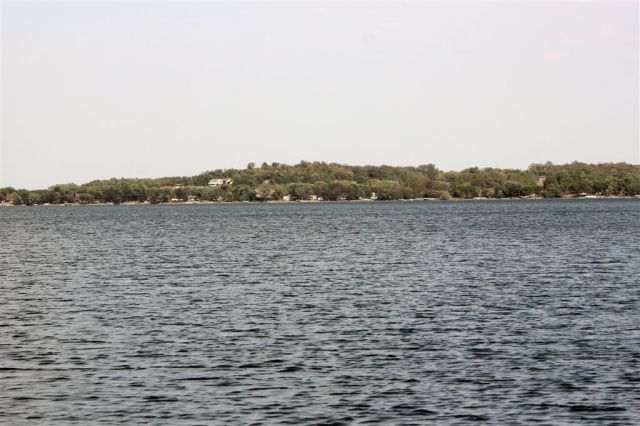 [The far side of the lake – the highlands – you can see downtown from there!] 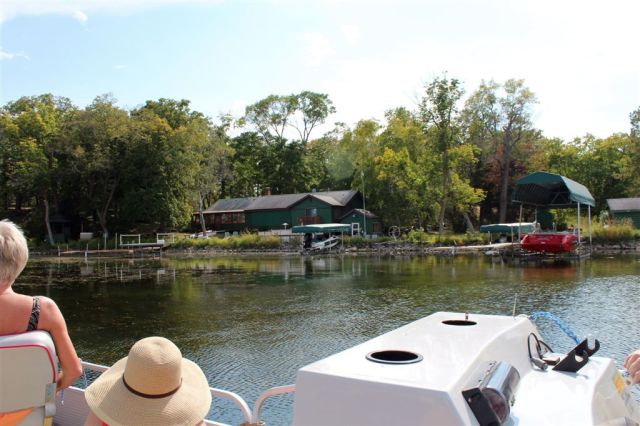 [The home of – way back when – Alexandria’s first millionaire (or so he was described).]

[Kiwanis Beach, or so it was back in the day.  We called it Bare A** Beach then, for reasons self described in the title.] 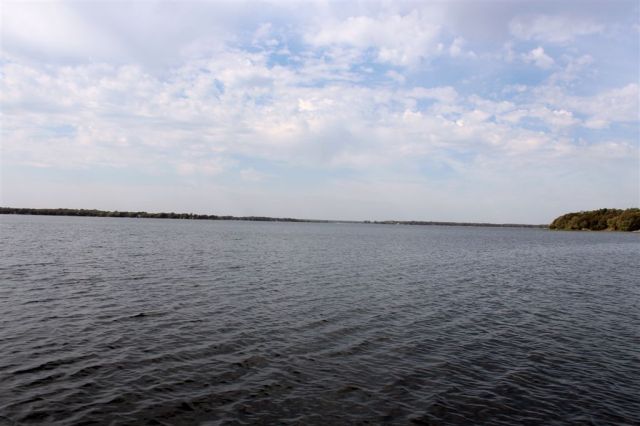 [Rita thought it a good time for a nap.] 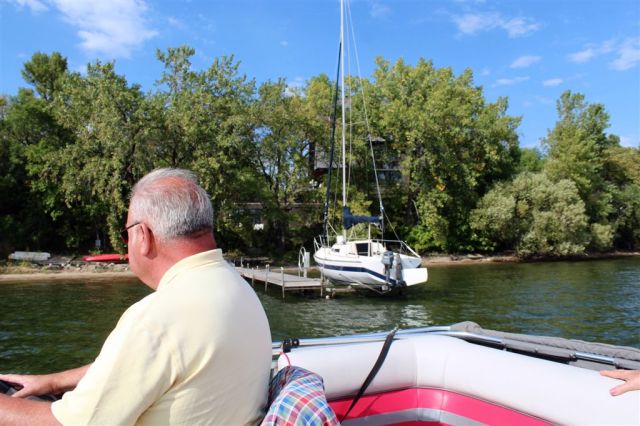 [Scott was the driver most of the day – the last house before the Le Homme Dieu-Carlos channel.]

[Not a bad place or vessel.]

[Approaching the channel – the ladies are barking out instructions.]

[A short dash through the South end of Carlos, into Darling, and almost home, we sighted (or saw) a great blue heron on Noel and Tina’s dock.] 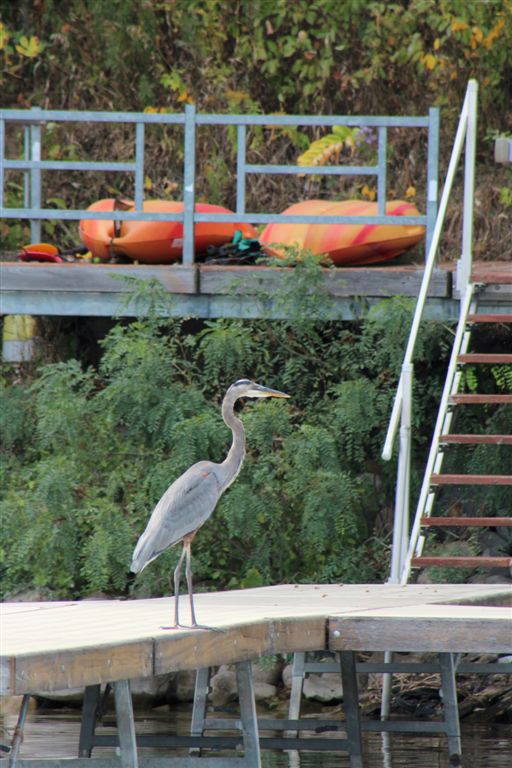 [We think he was picking out furniture for the missus.  Not a bad day – an eagle, some loons, and a heron!  🙂 ]

[Some color along our shoreline.]

Of course, it’s not all peaches and cream.  The supervisor went down to the Moby for clean-up the day before – we hadn’t used “her” for almost 2 months again.  I heard shouts of “Tom, Tom” coming from the lake.  I was up top, washing windows because the house had just been power washed, readying for re-staining.  I hollered down, “What?”  (Well, I couldn’t think of anything else to say?)  The response was, “There are bees on the boat and I’ve been stung twice!”  Mr. Maintenance to the rescue!  Yup, there were lots of them – not bees, but yellow-jackets, wasps, hornets, those small, fuzzy, yellow and black flying insects with stingers.  The drought has made them worse than ever this year.  They are everywhere!  We could see they were flying in and out of our live well – also a two-person settee.  They were able to get in and out under the lift up seat.  There were too many for a full frontal assault.  We retreated back up the hill – to wait for dusk!  We went back down at night fall, both armed with a can of insecticide (we would rather have tried to capture, and rehabilitate, them, but time was against us).  We snuck up, lifted the seat, and commenced firing.  There were gazillions of them.  We kept firing as we retreated out of the Moby and back up the hill to the house.  Ruthie was hit two more times – I was injury free until . . . I was washing my hands in the house when I felt something on my back – sting!  Then one was on my forearm – sting!  Somehow they had followed (OK, probably were carried) me into the house!  We went back down early in the morning – it was still pretty cool.  We slowly lifted the seat and began pulling out lifejackets and seat cushions.  Dead insects everywhere.  A couple layers down – the hive, a big one, with live warriors!  We fired our cans again – and ran away as fast as we could again.  That evening we went back down – it was a sorry sight.  Signs of the massacre were everywhere.  The next morning Rita went down with us – we used dust pans like shovels to clean up the aftermath.  Most of the lifejackets were ruined – they had “eaten” into them.  What was the old slogan about the happiest day in your life and boats? 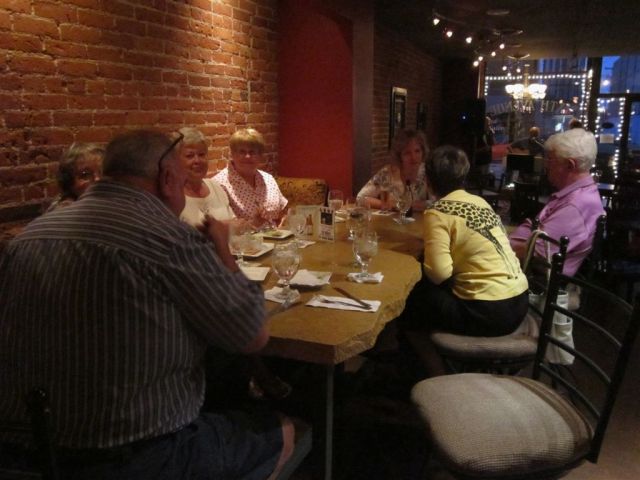 [We wrapped up a lovely first day at SAWA with friends and Uncle Willie’s Gut Bucket Blues Band.]