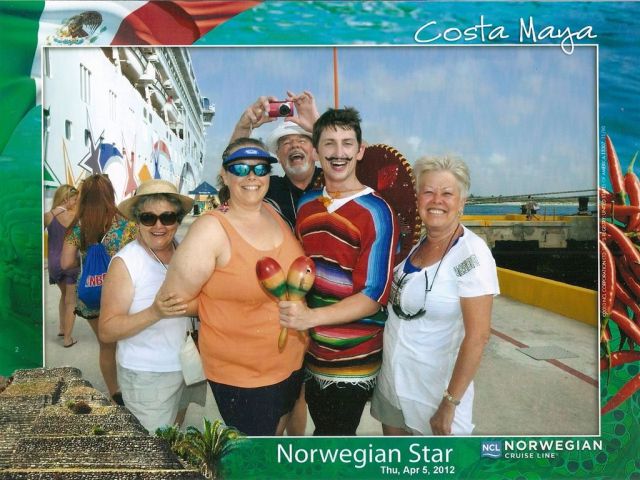 MEXICO!  Costa Maya, the one stop on the tour where . . . we weren’t going to do anything.  No tours, no shopping trips, just kinda hanging around the scene as it existed just off the boat.  It was the most gloriously touristy place on the trip.  Las Vegas meets Dsineyworld – though without the rides or the gambling (as far as I could tell).  It probably got a little naughty after nightfall.  We just sort of meandered around, checked out the shops, unsuccessfully tried to find place to sit on the beach, and eventually moved in on a woman with a young child at a restaurant table and just people watched.

[Photographing the photographer.  This is the guy who took the top photo which they then sell back to you for an enormous profit.  But it’s all in the game.]

[The supervisor, with her bad heel and Jami, gets a ride to town.] 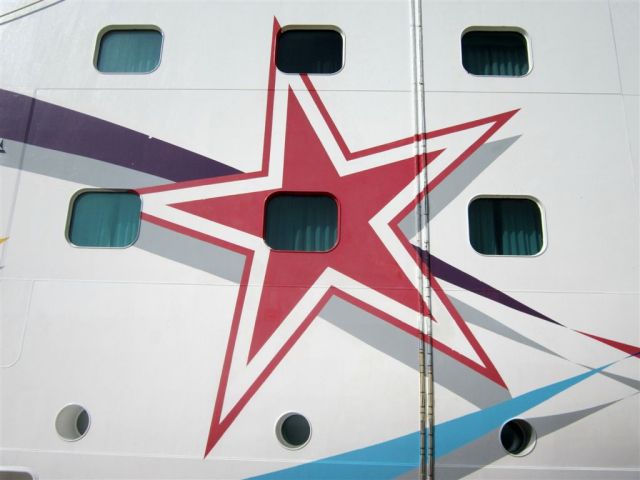 [The kids’ room is the one in the middle of the star.  How about that?] 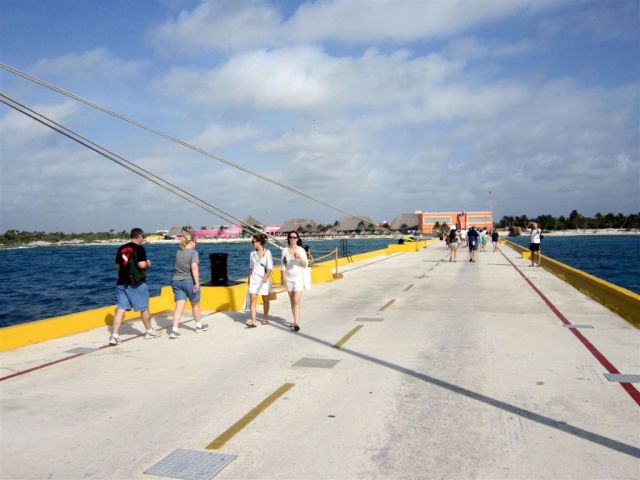 [Always check to make sure the ship is still there when you leave it!]

[A Carnival Line ship was also there.] 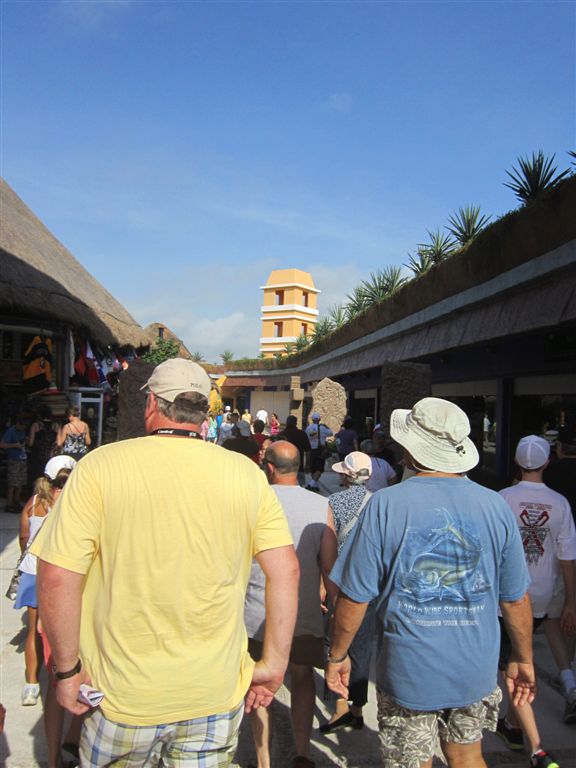 [The beach part of commercial world.] 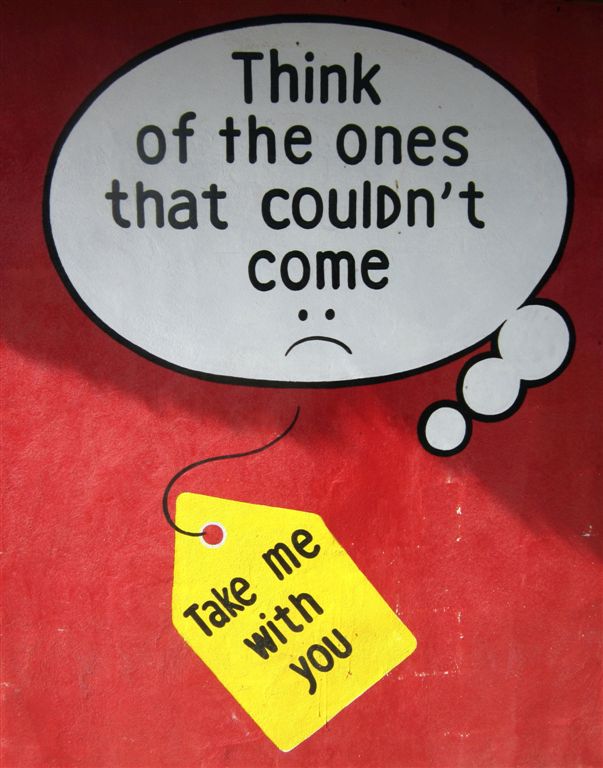 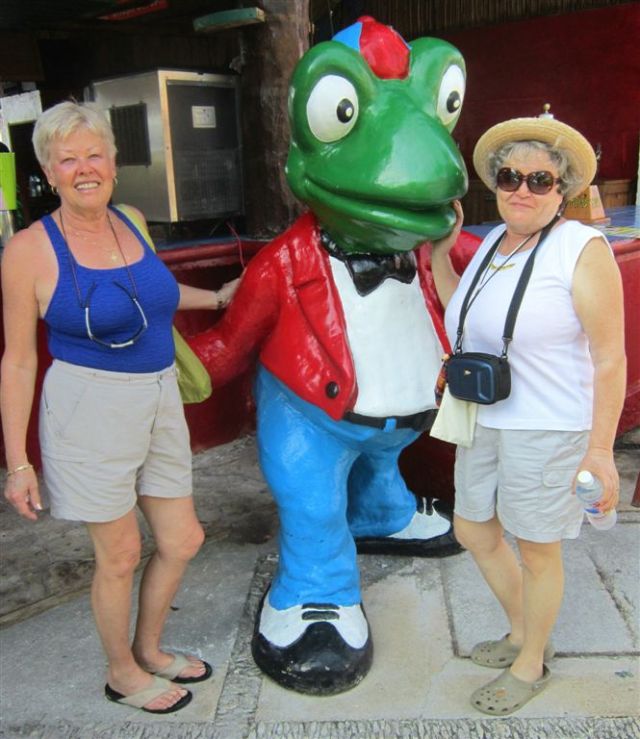 [The Biddies do speak a rudimentary form of amphibian.] 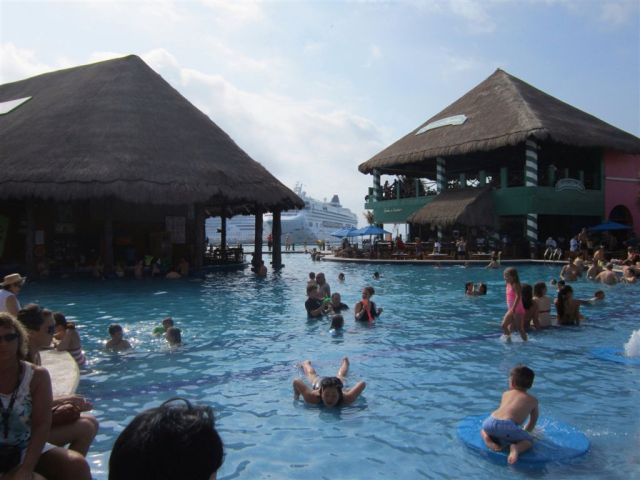 [I think she ordered a set of these for the dining room table.] 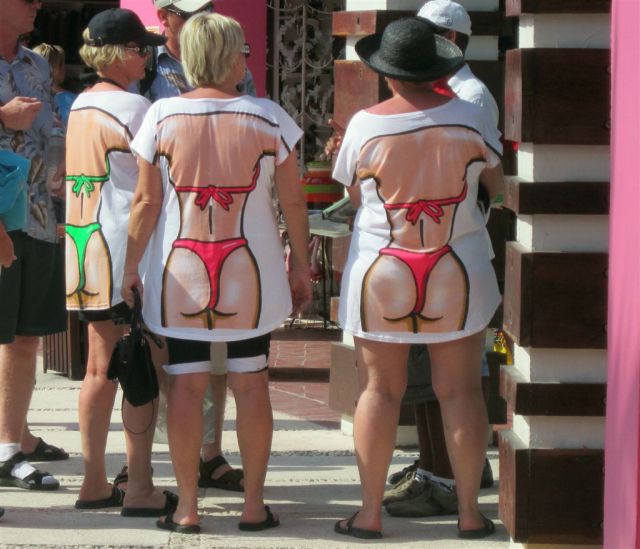 [I thought these would look good on The Biddies.  Just a thought.]

[Then we walked “downtown” – a Mayan temple at the end of the road.]

[It was some time around here where public restrooms became an issue.]

[I believe this is where the Mayans crowned their Homecoming Queens.  And the heat and humidity were starting to do strange things to my hat.] 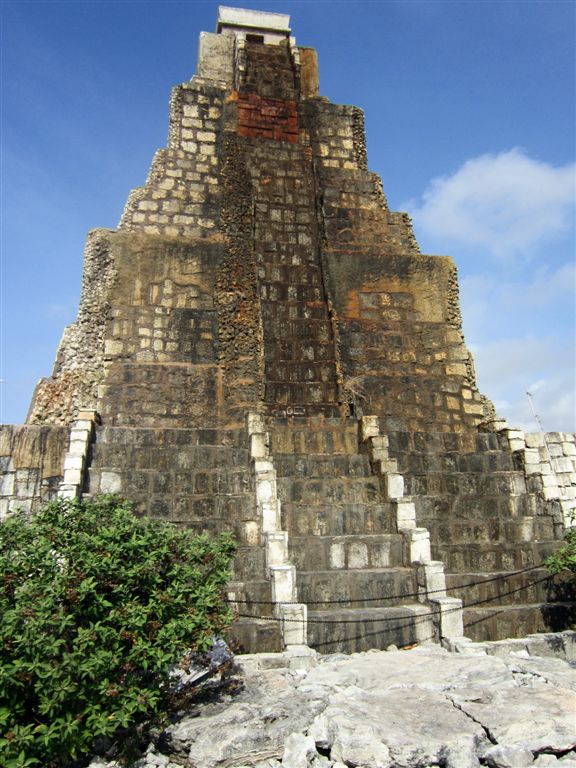 [Never lose sight of your ship.]

[A green iquana, not to be confused with the nightclub on Lake Reno.]

[Mother and daughter did do early morning yoga on the ship.]

[Why it’s always so important to hydrate.]

[I was hoping they’d all get the “Hot Like Me” t-shirt the sales clerk was wearing.]

[Mindful of home – a “going out of business” sign that had probably been up for years based on its wear and tear!  😉  ]

[My kinda guy!  I was so jealous – but then we were in the land of the siesta.] 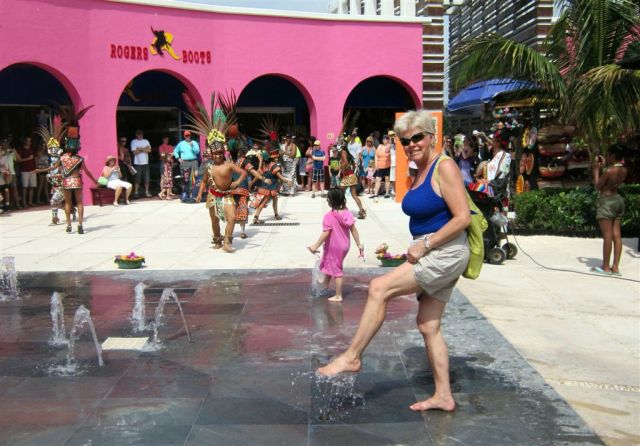 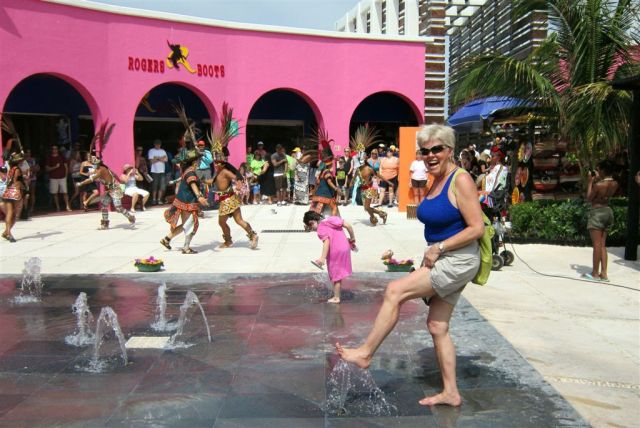 [The supervisor and the Mayans do a little dance.]

[Thousands of people hoping for the perfect tan.] 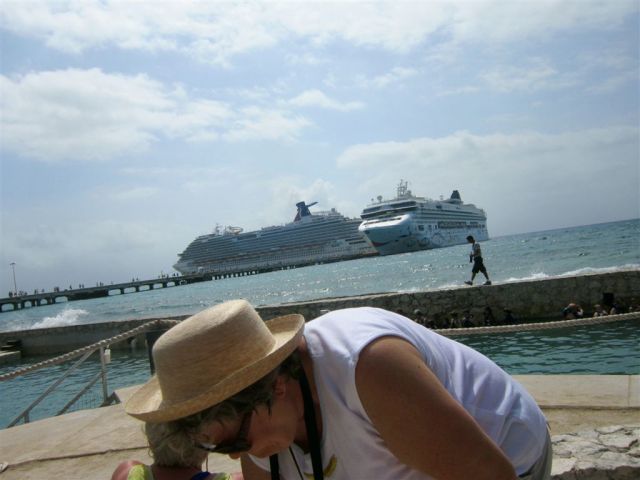 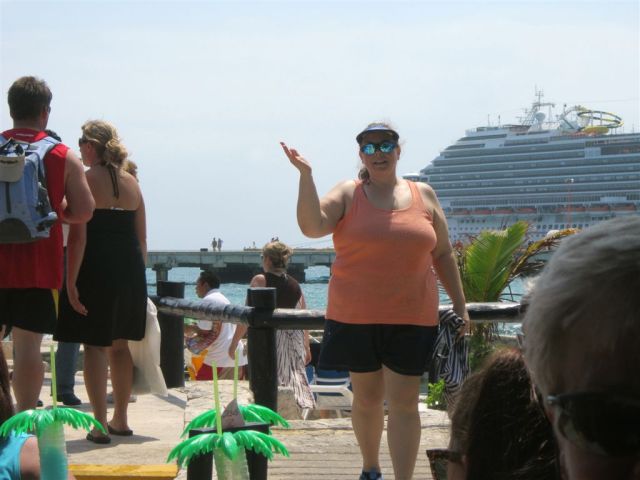 [As the supervised, I was told to get dolphin photos.  I was trying to figure out a way to free them from their uninvited company from Illinois.] 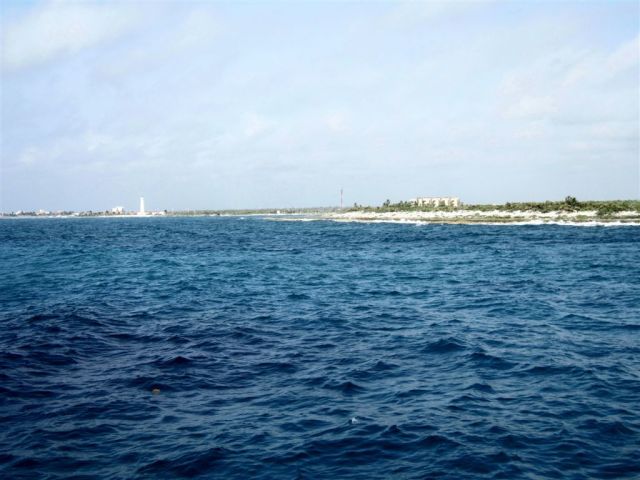 [I believe the way to private beaches.] 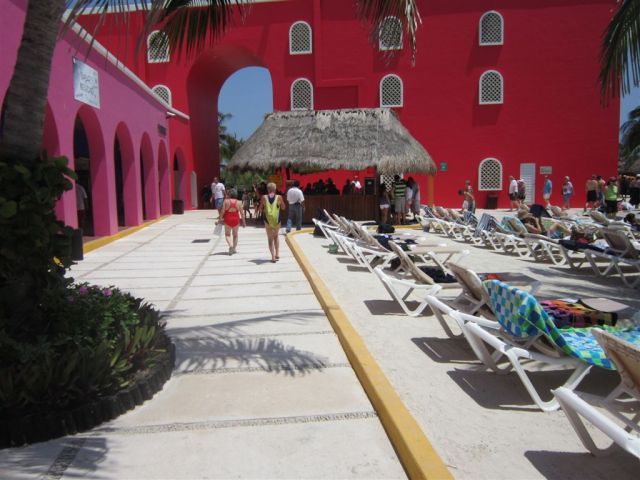 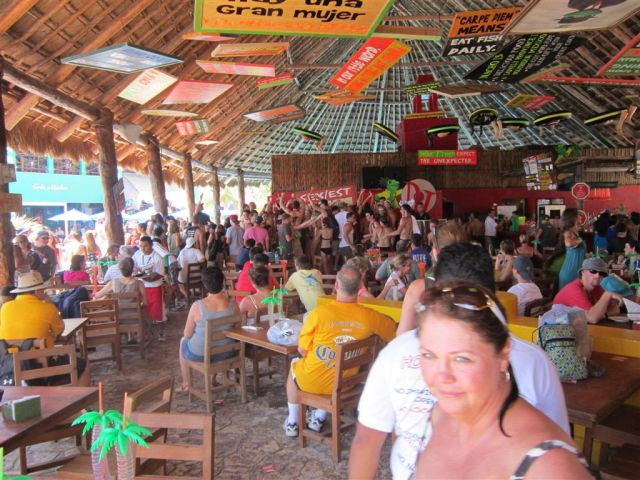 [Why I had to get The Biddies “home” before sunset!] 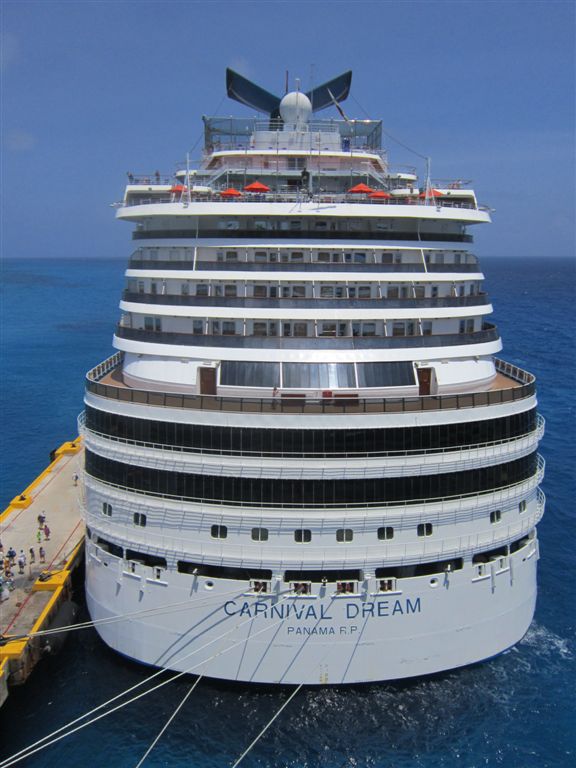 [The beach to the right was offlimits – a wildlife area, we presumed.]

[Not a lot of topography, which, as George Carlin noted, you can yell in a crowded theatre.] 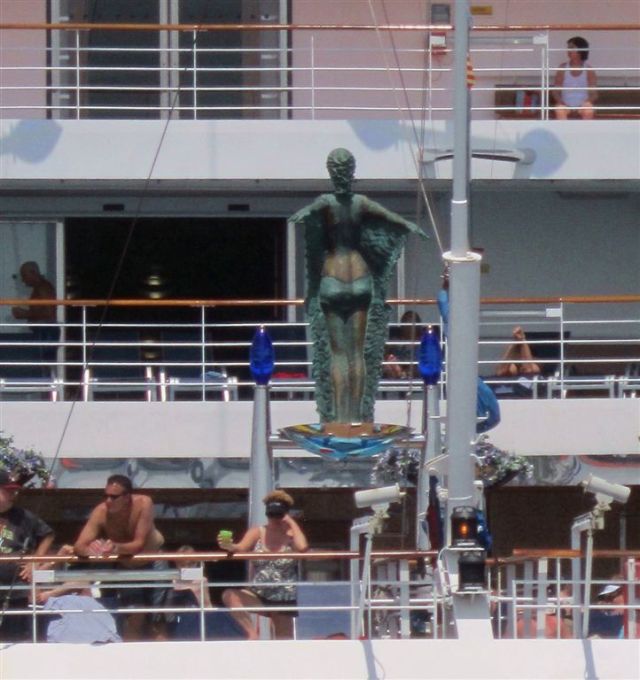 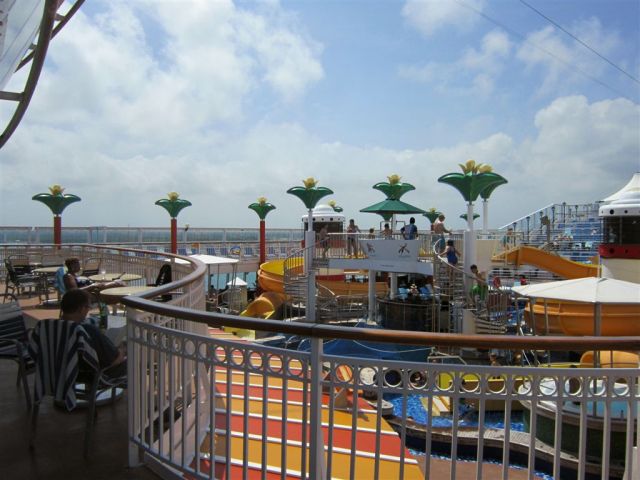 [The Biddies contemplating a future attempt at the water slide.] 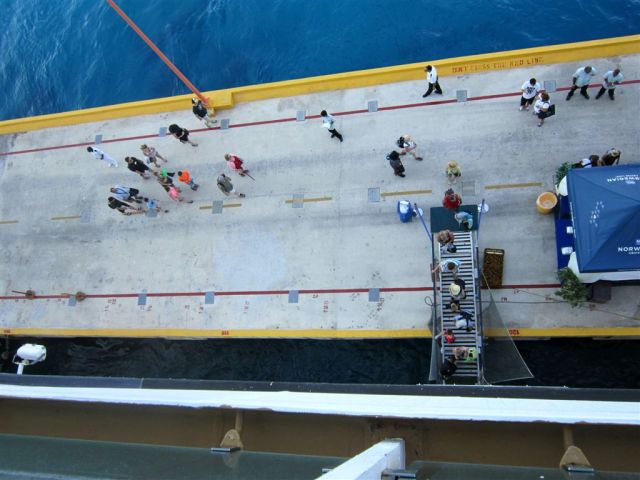 [Our passengers returning to ship.  You are told when you leave to be back by a certain time.  If not, well, it’s a long cab ride home.]

[Swimsuits of The Biddies.]

[Tomorrow, I would show my technique to The Biddies in Cozumel.]