OK, that may not be an exact quote.  But it was words to that effect as we ambled across the parking lot at Halenbeck Hall on the campus of St. Cloud State University last night after the Cardinals had dispatched the Thief River Falls Prowlers in the section 8AAA semi-finals.  Regarding the above photo, we had to clear a spot in the back seat for Roger for our journey to the Granite City, so everything ended up in the trunk – including our “LT’s-on-a-stick.”  So, we of course forgot to bring them with us into the arena.  So (again with the “so”?), I told the supervisor she would have to pose with them after the game.  But she was in her bathrobe as soon as we got home – no chance for a photo now!  So (yes, again with the “so”), this morning I made her hold them up in bed because I wanted to start this post – she agreed only if she did not “actually appear” in the photo. 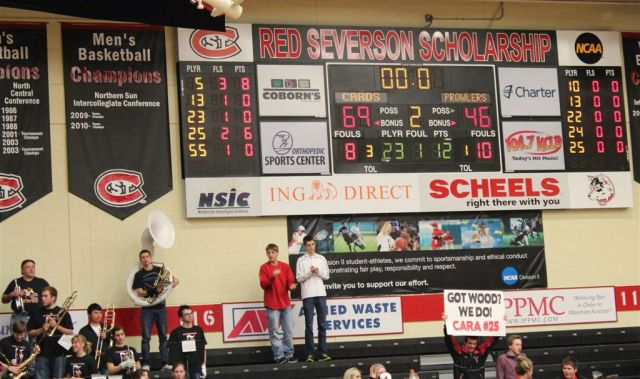 [The final score, the band, and the ubiquitous “Got Wood?” (for Cara) banner.]

So ( 😉 ), this morning we’d like to begin with the game opening video.  Once we all suffer through the first two minutes of nervous sloppiness by both teams (or, more likely from the camera guy), you catch the exact flavor of the rest of the game – and how Lauren could have a perfectly symmetrical 18-18=36 points night.  The video ends with the Cards taking a 6 – 0 lead after three straight fast break lay-ups, two by LT after steals and the other an assist by her to Kalli:

So, anyway, the Prowlers came in with an excellent 23 – 3 record.  They beat Detroit Lakes in the opening round – the 3rd time they had beaten the Lakers this year.  We split two relatively close games with DL this year.  The Prowlers were remarkably similar to the Lakers – not a lot of size, but a lot of players who could shoot the 3!   After the Prowlers recovered from the initial onslaught by the Cards [abetted, we believe, by an early plethora of foul calls against our pure and innocent Cards, thus stifling our previously stifling defense, and the Cards many possession descent into unforced turnovers (happens to all teams – and we have to remember, they are teenagers)], they recovered by displaying their 3-point shooting prowess to take a brief lead.  The Cards then re-spurted to a 31 – 20 halftime lead (meaning the Prowlers then had only 2 more points than LT), and the Prowlers only reduced the deficit to under 10 one more time the rest of the game. 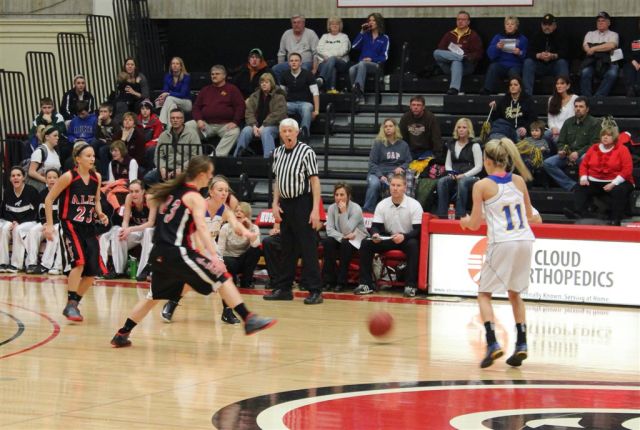 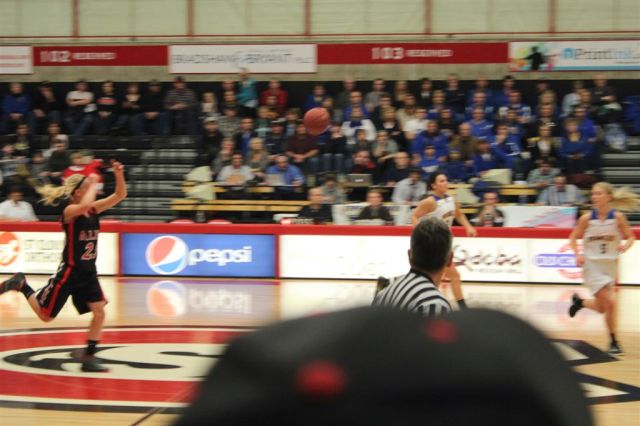 [Best defines the entire season:  Cara headmanning a pass; a hat in my photo line!] 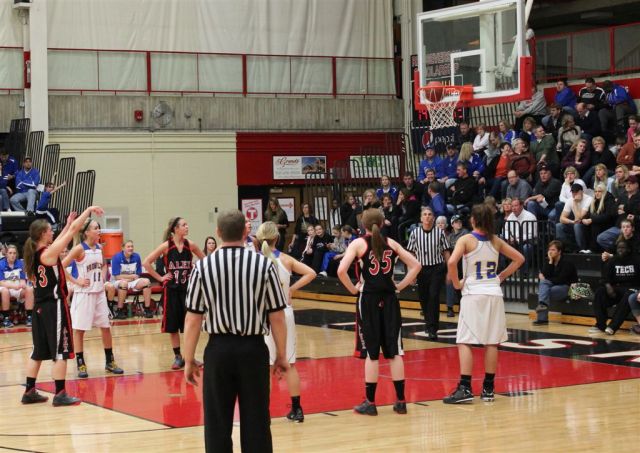 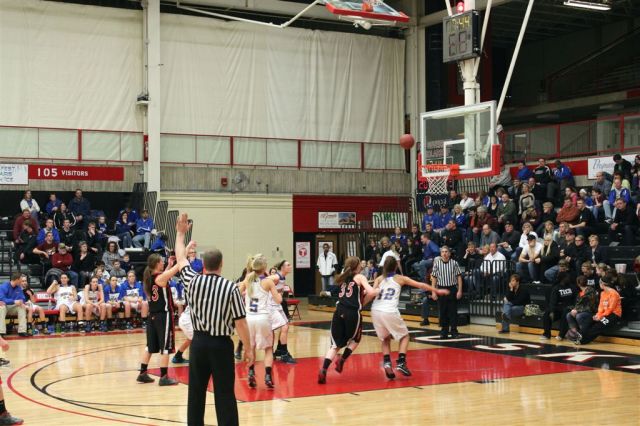 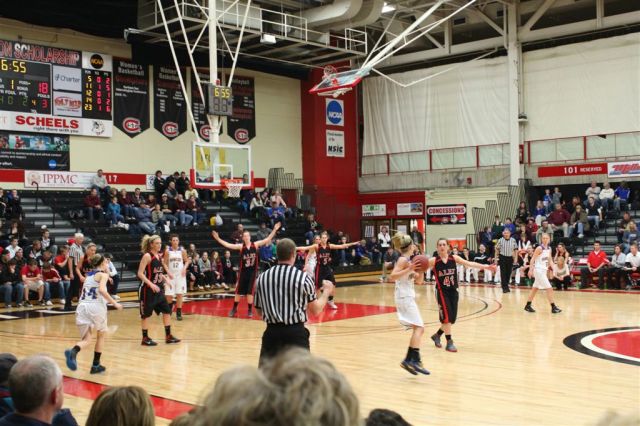 [One of our defenders must be cleverly hiding behind the ref?]

[If you have to jump to execute a backward pass from beyond the 3-point line . . .]

[Prowler point guard (No. 11) hits a 3.  A very good player – but likely had never run into a force of nature like Ms. Trumm before.] 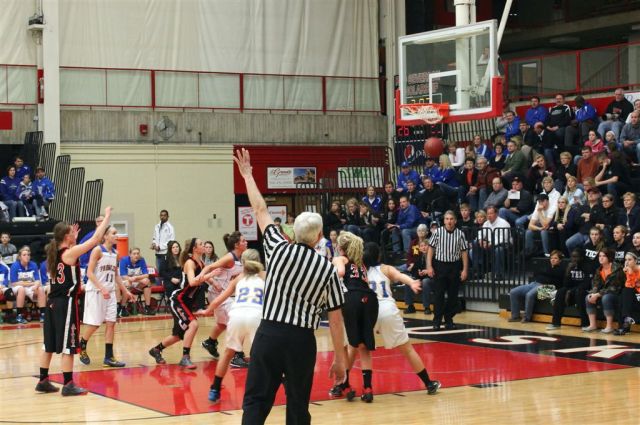 [LT tacks on some more.] 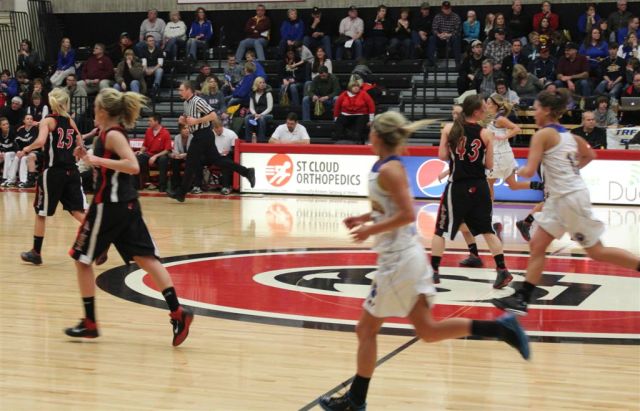 [Cards hustle back on defense.]

[LT spots Whitney, who has inside position.] 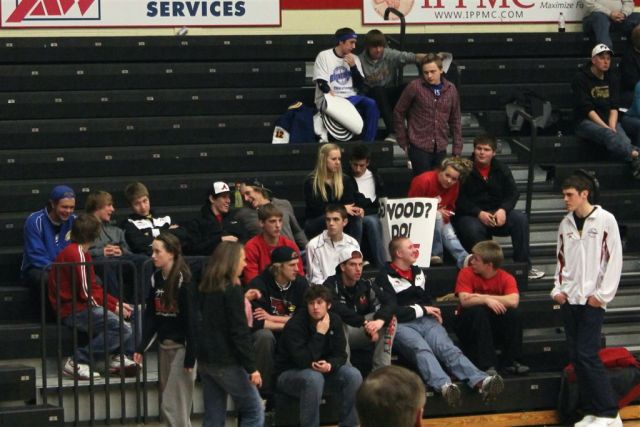 [Fergus girls’ team scouting us after having dispatched Sartell in the first semi-final.]

[LT inbounds to Amanda C to begin the 2nd half.]

[Cara whips a pass to her left flank.]

[Amanda C attempts a pickpocket move – a misdemeanor in all 50 states, even worse in Slovenia.]

[The basketball equivalent of gang tackling.] 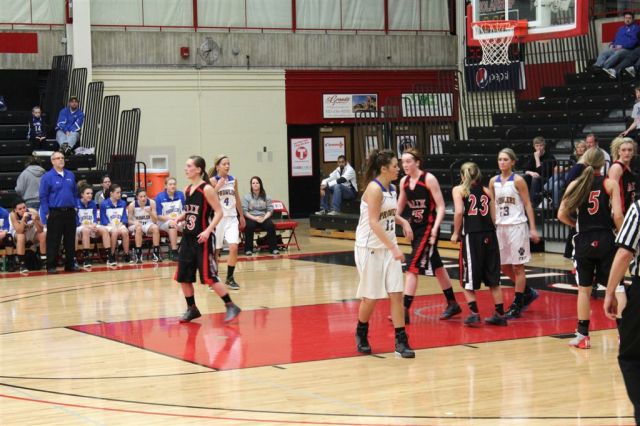 [Kalli thinks, “This is a great spot to stand for this play.”]

That great spot to stand was probably a set up for the wheel play.  Unlike DL, Fergus, Sartell, who we play regularly, we only play TRF if we meet in the sections (it requires a change of planes in Moorhead and a two dogsled rides to get there) – thus they are not familiar with us.  When they fell behind and had to press, we immediately ran the wheel play with Amanda C, with the accuracy of Tom Brady, hitting LT streaking down court for a lay-up.  The next time the situation arose, TRF played more of a prevent defense, so we inbounded normally.  Then the next time, we caught their free safety cheating, and hit LT going long again.  As Roger always says, “I love that play!”  We run the mini version of that play from under our own basket – LT circles the entire free throw area, picking up picks along the way, and ending up right underneath the basket for the inbounds pass.  If the defense catches up with her, it’s usually a foul; if they don’t, it’s a lay-up.  LT made many points off that play in the game. 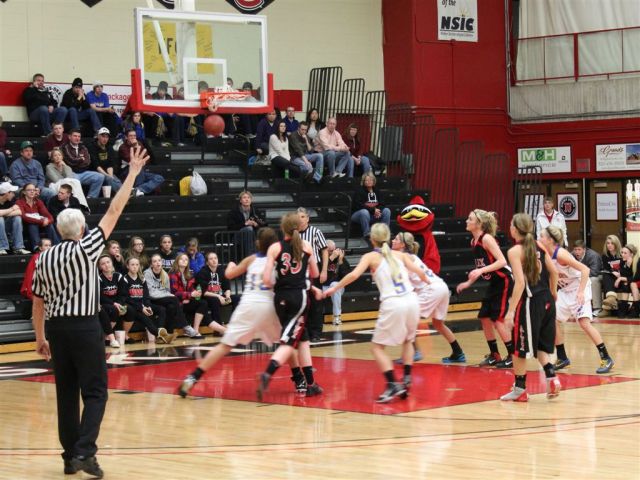 [Amanda C sinks two.  She had a tough 1st half – sat out most of it in foul trouble.  In the 2nd half, she hit two 3’s, made her free throws, and scored all of her 12 points.  She can get to the line because she has the ability to take the ball to the hoop.]

[Cara made two free throws as the game wound down.  The team was solid in that regard and told the Prowlers they couldn’t get back in the game by fouling us.  Cara had her usual solid game running the team from the point.]

[We win!  Whitney hit a 3 and was a terror on the defensive wing – she had a lot of pass deflections and is becoming quite the shot blocker out there.  One time we thought they had an open look at a 3, but Whitney came flying out at her and blocked it  Kalli had 8 points in the 1st half, and then in 2nd half concentrated on getting all the rebounds!] 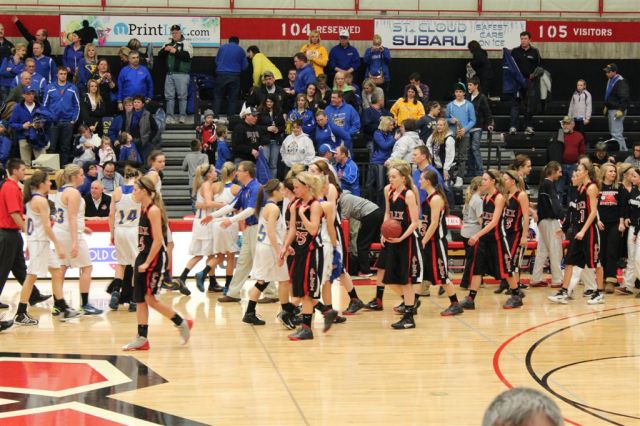 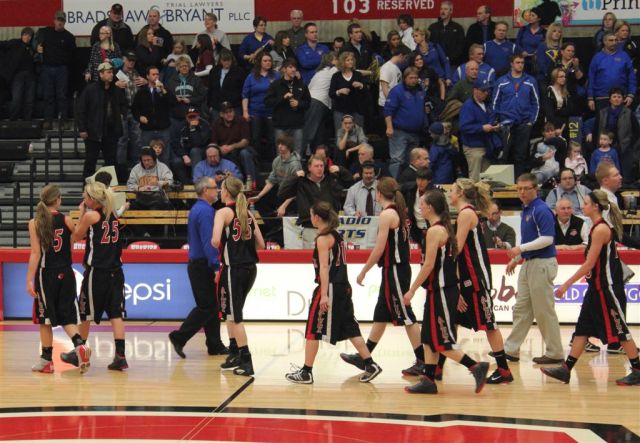 So now we play Fergus again for the section championship – next Friday in Moorhead.  See you there! 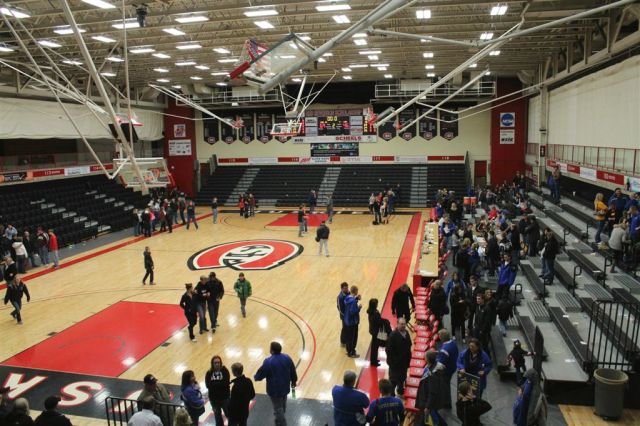 Good-bye to Halenbeck Hall for another year.

And another beautiful sunrise over Lake Darling this morning!  🙂