It Was Just Not Very Close

This was halftime.  It appears Bob and Dave were trying to think of a way to describe what they had just seen.  You’ll understand as we go along.

[Cara during warm-ups.  All seemed normal so far – except I accidentally shot this in flash.  An omen?  Who knows.  But I don’t much care for the tint of the flash photo.]

[Whitney generally settles in around the 3-point line.] 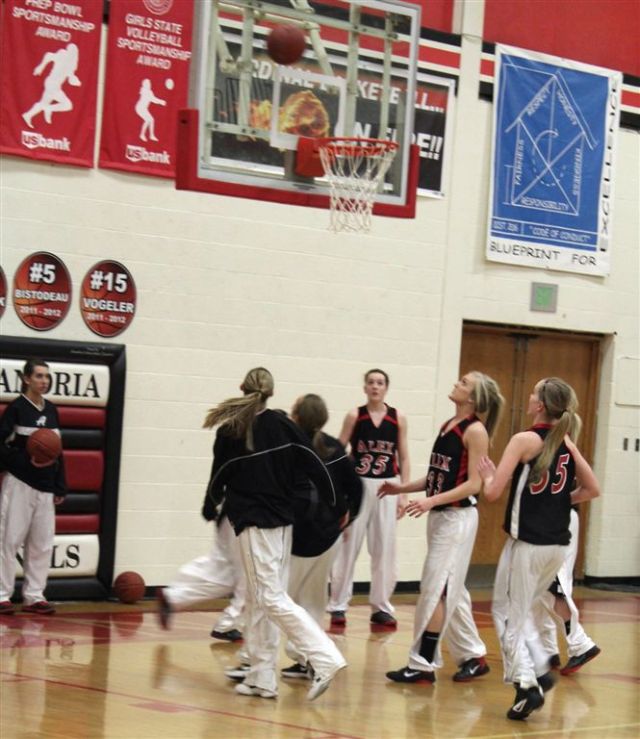 [Eyes on the prize.]

[Whitney and Cara shot lots of 3’s – nothing unusual there.]

[And LT did her usual shooting from the corner.]

[Val Trumm did a little pre-game distribution of “her daugher on a stick” to the LT Fan Club.]

[It appears Sauk Rapids got off a shot here.  Did I mention we were playing them in the opening round of the class AAA sections?] 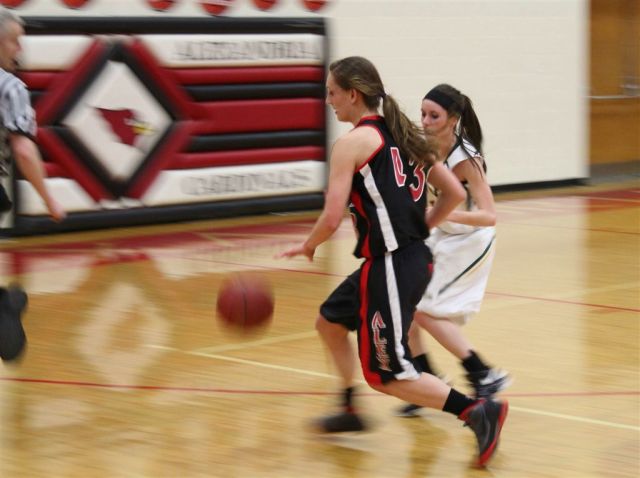 [And this is what happened most of the time – LT streaking down the court w/ball.] 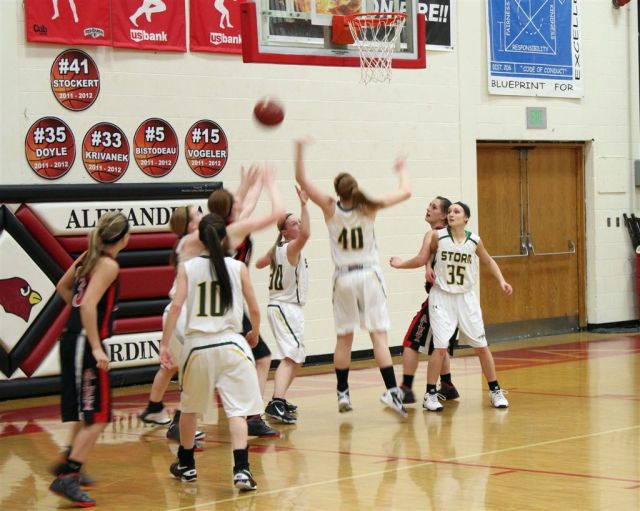 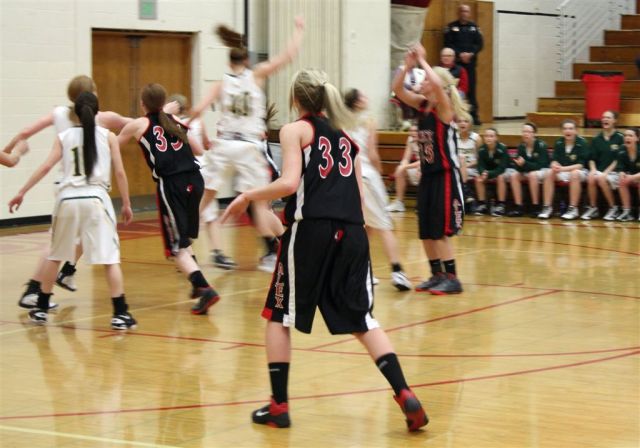 [Note expired time as we roll along.  A half is 18 minutes.] 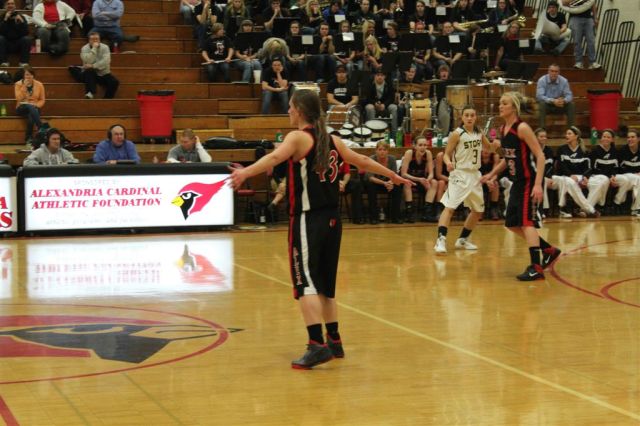 [A really tough defense to play against – aggravated if you don’t have tall guards.]

[The blue garbage can sets a mean pick.]

[The Storm thought we were a blur the entire game.]

[LT and Cara set the offense.] 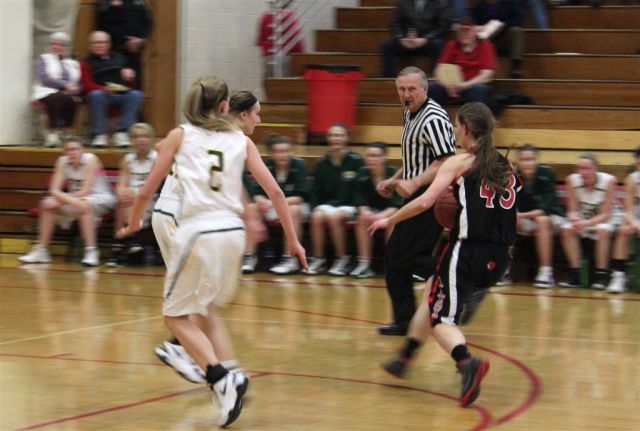 [I was just sitting there, minding my own business, when a big red bird ambled by.]

[Cara is back lit by the scorer’s table as she brings the ball into the front court.]

[Once past the scorer’s table, we resume normal ambient lighting as we convert on a lay-up.] 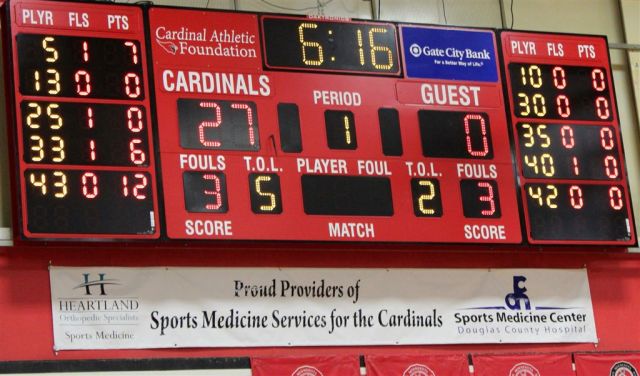 [The crowd is getting restless.]

[Whitney on the lay-up.] 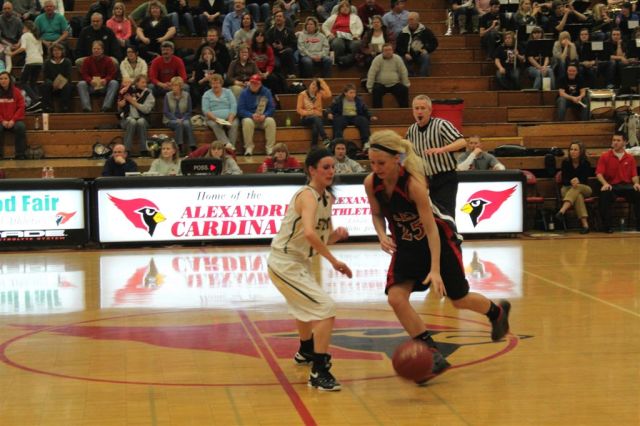 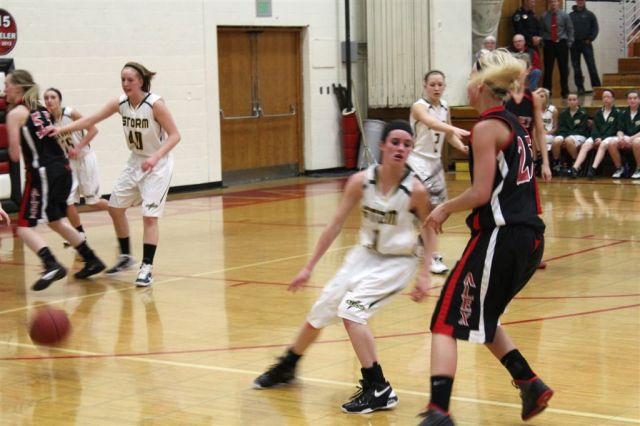 [Cara brings it upcourt and sets up another score.] 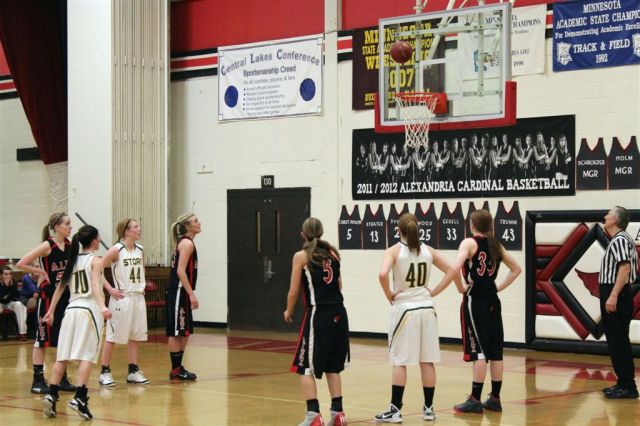 [Then the Storm’s point guard got a break out and was fouled.  She missed her first free throw and even the Cardinal fans had to groan.] 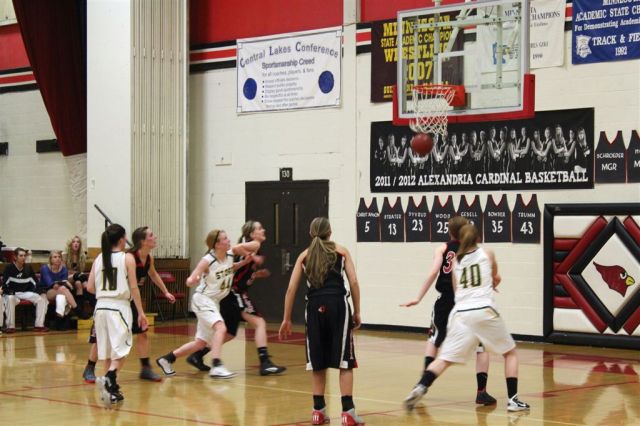 [Now inspired, the Storm made a 3 as the half came to an end.] 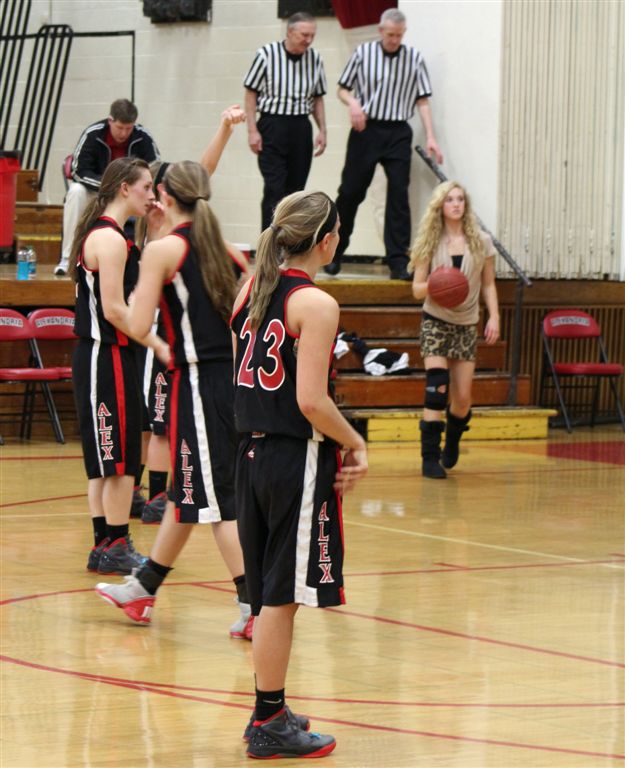 Coming out for the 2nd half.  The game was no longer in doubt, obviously.  We were looking forward to seeing everyone getting a chance to play.  And at some point, the game went into running time.  Once things start rolling, it becomes infectious – everybody found a comfort zone that lead us to make more 3’s than I every recall.  Whitney had at least 3 (she can hit ’em when she takes her time and squares up), I think Amanda had a couple, and Cara may have had one too.  But mostly it was just overwhelming defense that made it difficult for the Storm to even get a shot – I’m sure a high percentage of our points came off turnovers. 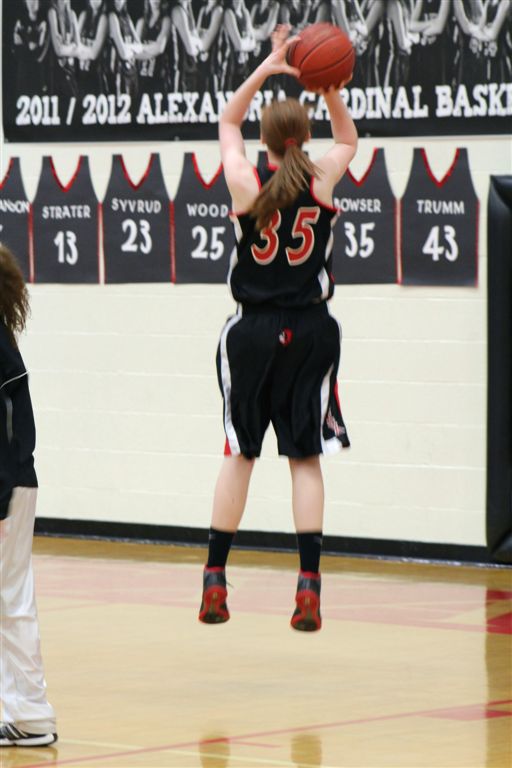 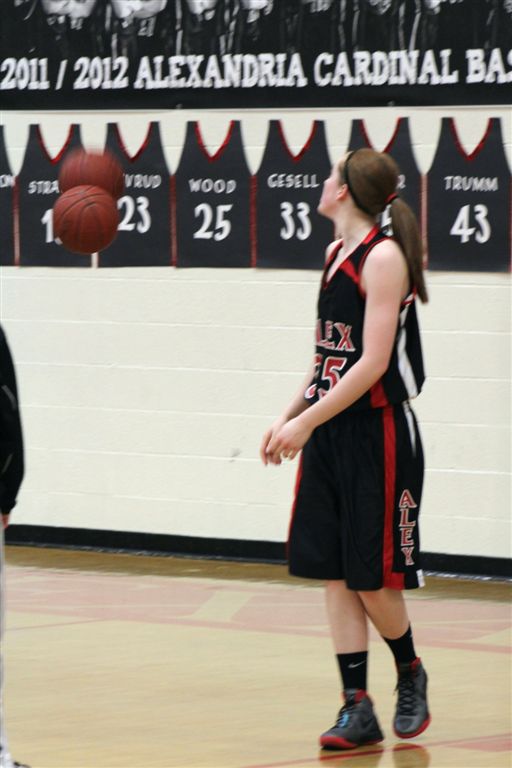 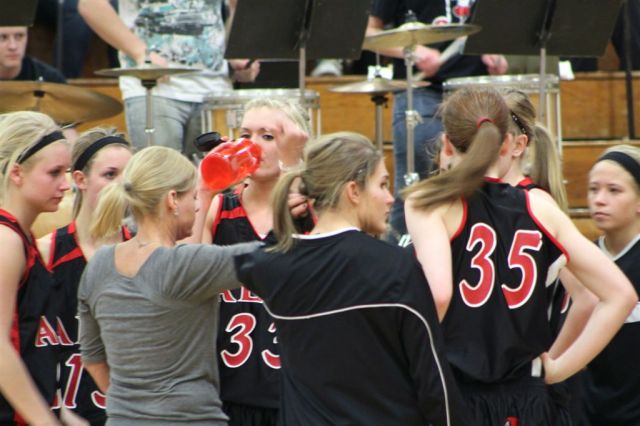 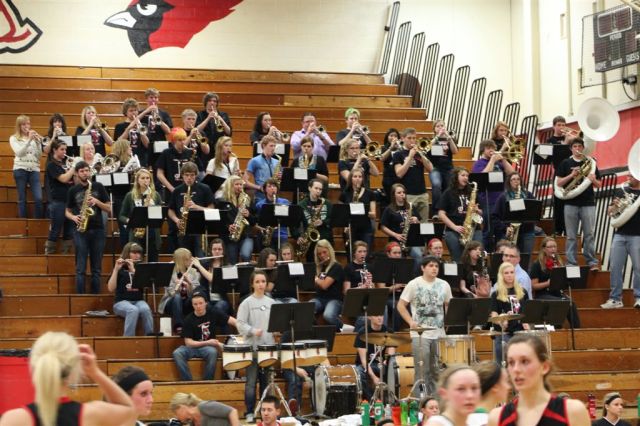 [The band.  The young man in the upper left, sax player, rainbow hair, will also be featured at the end of this post.  🙂 ]

[So many options off this formation.]

[Whitney, “I seem to remember having teammates?”]

[“Everybody get ready to play!”] 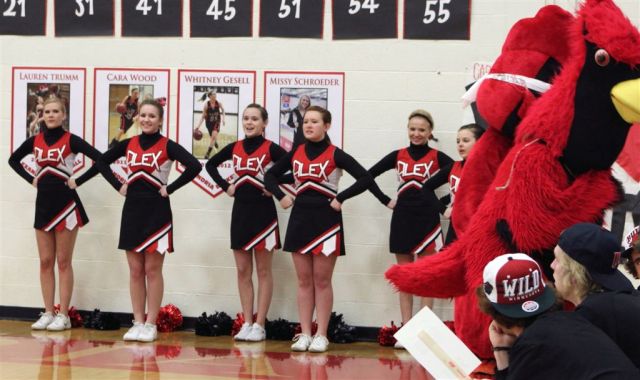 [End of the night for the starters.] 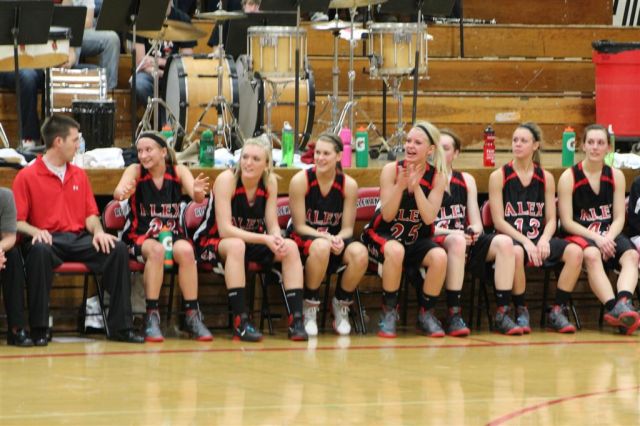 [The starters then enjoyed their role as cheerleaders!]

[Ponytails require constant adjustments – though that’s something about which I am not familiar.  Abby Hlinsky completed a 3-point play.]

[Then everybody left her?] 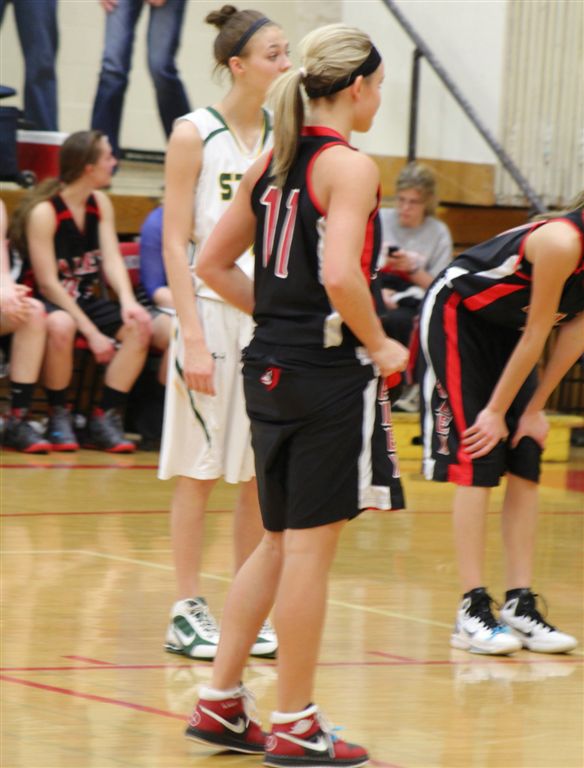 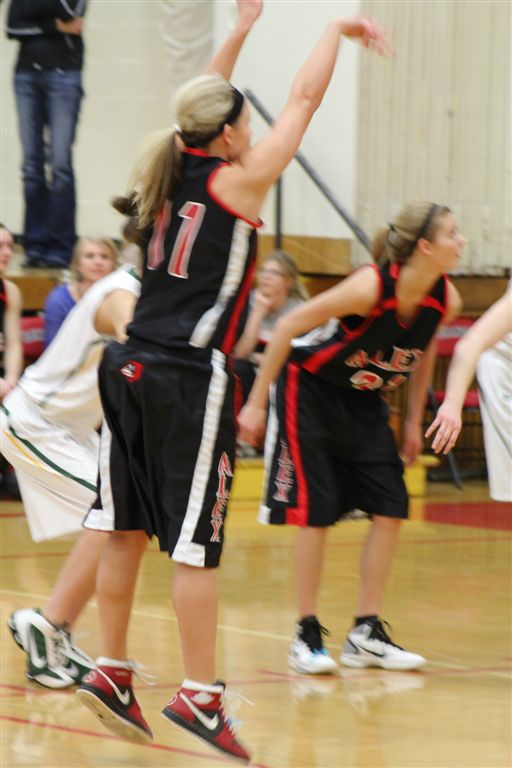 Oh, the final score was 70 – 18.  Then Super Fans bolted to SAWA to catch the last half of Funky Gumbo Trio – who were later joined by our saxophonist from the pep band (whose name I have unfortunately forgotten, of course. 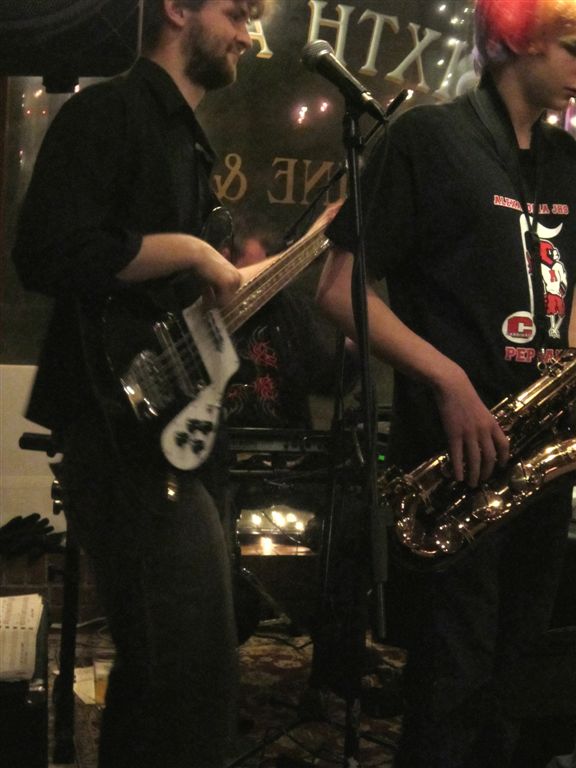 [The boys tore the place down, as usual.]

We end our basketball coverage with Whitney in the Fergus game (from Echo Press).  All the higher seeds won in the opening round, so tonight’s semi-finals are Fergus v. Sartell and the Cards take on Thief River Falls in St. Cloud.  We plan to be there.  If we get by the Prowlers, the section finals will be in Moorhead next Friday.  Go Cards!