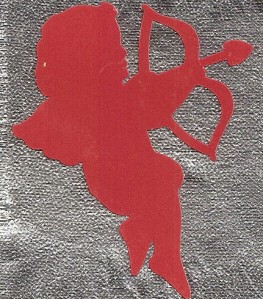 Last night was the section 6A semi-finals for girls’ hockey at the RCC between our Cards and North Lakes.  I may be wrong on the “North Lakes” part – they are generally referred to as Pequot Lakes, but it is a small conglomerate that also includes Crosby-Ironton, among others (I believe).  The Cards were the No. 1 seed in the section, so last night was our first game in the tournament.  We had played Pequot at home just two weeks ago – I think we were expecting a relatively easy win, but the game ended in a 2-2, after OT.  The Cards held a 45-15 edge in shots on goal in that first game.

Incredibly, last night’s game sounded like a carbon copy.  It was a 2-2 tie, went into OT, but this time Alia Kopischke scored with about a minute and a half left to give the Cards a 3-2 victory.  Again the shots on goal were something like 45-15.  They have a very good goalie! 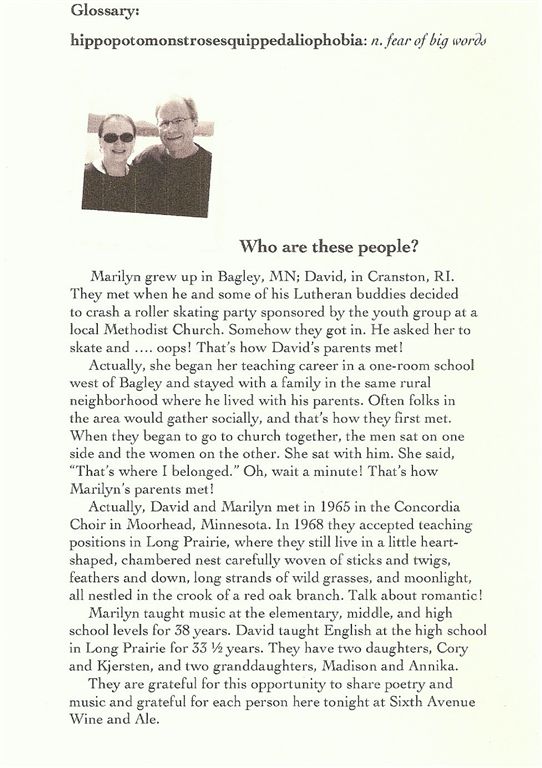 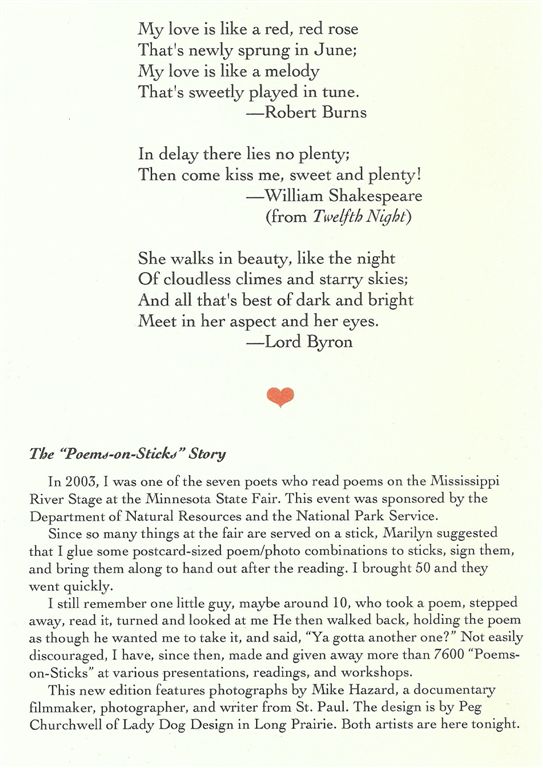 [The supervisor exchanges scouting reports with other Super Fans.]

[The arena fills with fans.] 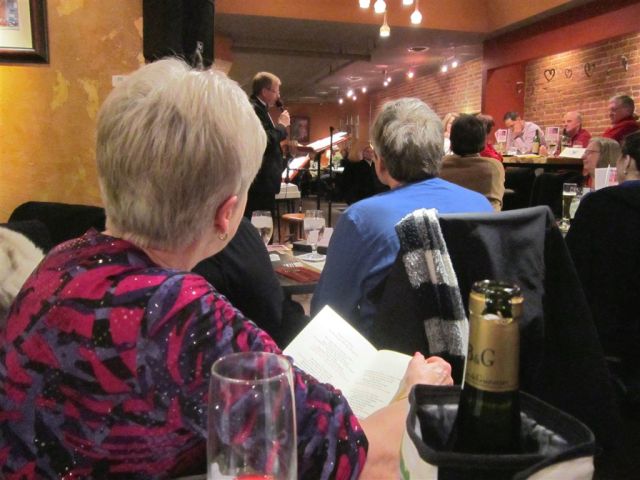 [The fans are invited to join in on a cheer.]

[The supervisor believes there may have been an unconfirmed roster change.]

[We toast the victors.] 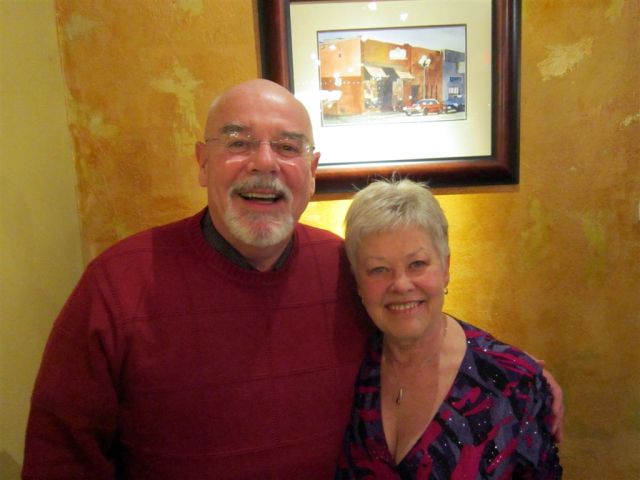 [To “Dangerous” Dan, our next-door neighbor, wish you could have been here.]

[The supervisor leaving the arena – one of the few night’s when we had a little snow.]

OK, by now you’ve probably figured out we weren’t at the hockey game.  Conflicts happen.  A long, long time ago in a place far, far away, we decided to make Valentine’s Day our anniversary.  So, for the past several years we make early reservations at Sixth Avenue Wine & Ale for a 4-course dinner, with entertainment by David and Marilyn Bengtson.  At the time we did not realize we were going to have a hockey conflict.  To the supervisor’s credit, we have celebrated past anniversaries by . . . going to girls’ hockey games.  I will admit to sneaking out to the car between courses to check on the game – and I was listening live when Alia scored the winning goal.  Then I went back in and had dessert.

Fortunately, we had a new stringer at the game to provide on-site coverage:

Hope you had a nice Valentine’s Day and Anniversary celebration last night.

You missed a nail biter last night.  The Alex girls skated hard and peppered the net, but the Pequot Lakes goalie was a wall.  Alia Kopischke scored first in a scrambled in front of the net near the end of the 1st period.  They scored a power play goal to tie it up right away the start of the 2nd period.  We went into the locker room at the end of the 2nd period tied 1-1.  We dominated the play most of the 3rd period and finally with just minutes left, Taylor Ellingson got the puck in the goal during another scramble.  With a 2-1 lead, we were crossing our fingers we could just keep the puck buried in their end.  Unfortunately, on a nice breakaway, PL scored with about 1:30 left.  So, into overtime we go. Again, we dominated but every time the puck went into our end of the rink the crowd collectively held their breath.  With about 2 minutes left of the first overtime, Alia Kopischke scored a pretty goal off a nice pass from Kalley Kragenbring.  Shots on goal were 45 – 15 in our favor.  Yikes!

So, next stop is DL at the MAC in St. Cloud on Friday night at 7:00. I think it could be a good game. Maybe we will see you there – all depends on our boys’ hockey schedule (things are up in the air right now).   ~ Karen Meuwissen, hockey mom (to Beth Rindy from the state championship team) and, incidentally, a marketing and sales instructor at the Alexandria Technical and Community College

Thanks, Karen!  And I presume we will see a rush of Super Fans to St. Cloud on Friday night?