Hey, how ’bout some sports? 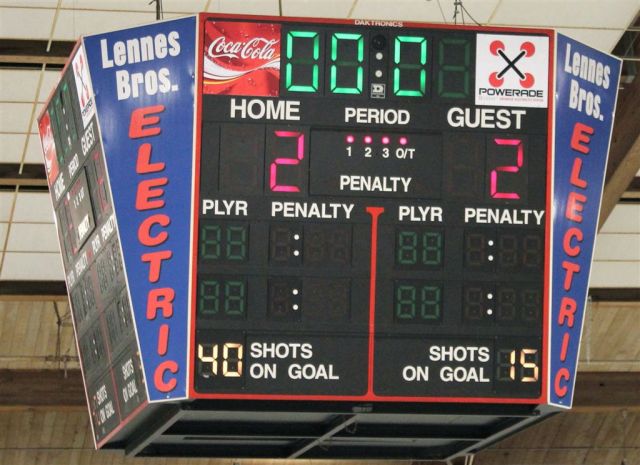 OK, the Alaska cruise has taken on a fan base all it’s own (and we’re not done yet) – or so they tell me.  But it was posted merely to fill a void in the home sports season (and to provide an e-diary for the participants and family).  Last night, sports intruded in our lives again.

The girls’ hockey team had their first home game in a while.  Last night we hosted the North Lakes (a/k/a, Pequot Lakes, et al) Lightning.  I think the pre-game consensus was this would be an easy game.  Well, it didn’t quite turn out that way.  As noted on the scoreboard, the game ended in a 2 – 2 tie, in overtime, though we outshot them 40 – 15.  When I got home I had to check Pequot’s record – they were a not so bad 5 – 9, but they were in every game.  The reason – they have an excellent freshman goalie who will keep them in games for the next three years.  She prevented us from scoring on breakaways and point blank shots.  Like a dominant pitcher in softball, a dominant goalie can control a game.

But the game low light was losing another player to injury.  Early in the first period, after a scrum in front of their goalie and after the whistle had blown, Alia Kopischke was knocked to the ice, and suffered what after game reports indicated was a concussion.  We couldn’t believe there was no penalty call.  Kalley Kragenbring has been out two weeks with a concussion and will be out at least another week; Britni DelCastillo was also out with a knee injury (bursa sac).  That’s three starting forwards – in a sport where a lot of teams only play two lines.  It’s not an excuse – as Sgt. Joe Friday would say, “Just the facts, ma’am.” 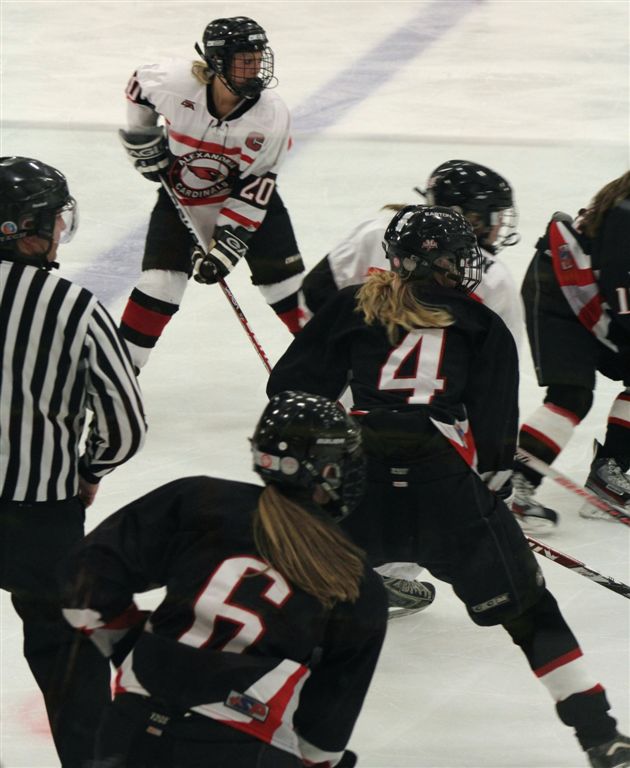 [A flurry, but no goal.  I videoed the 1st 5 minutes, but nothing much happened.  We never really got it going in this game.]

[After Kalley was injured, Taylor Ellingson (24) was moved from defense to center on the line with Rachael Finley (15) and Alia.  After Alia got hurt, freshman Kaila Dewanz played left wing.]

[They scored first when we had a turnover in our own end that allowed an uncontested solo on net.  Shanee’ tied it up on an end-to-end rush from her defense position.] 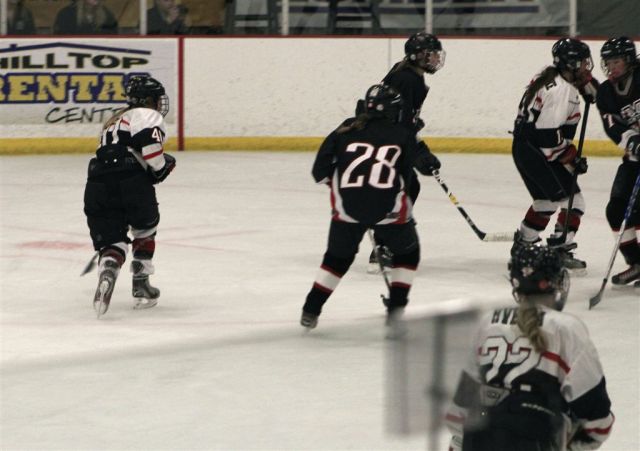 [Shanee’ and Heather on the attack again.]

[As I recall, this was trying to explain why there was no penalty when Alia got hurt.] 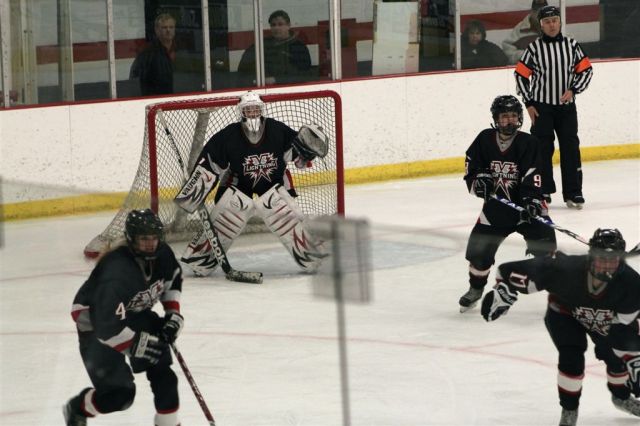 [Madi Houska (12), filling in for Britni, on the line with Shelby Iverson (38) and Becca Illies.]

[And Madi gets a shot off.]

[Rachael on the door step.] 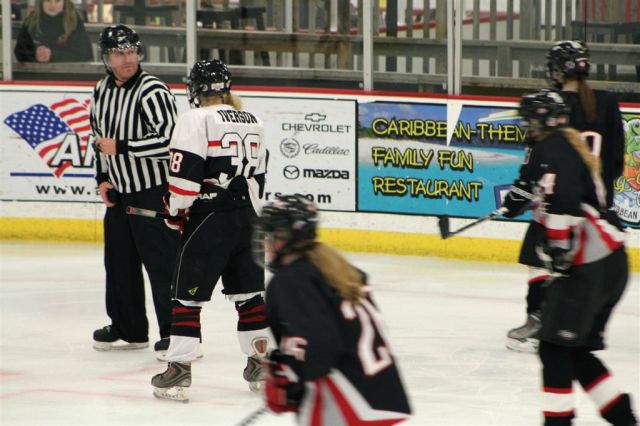 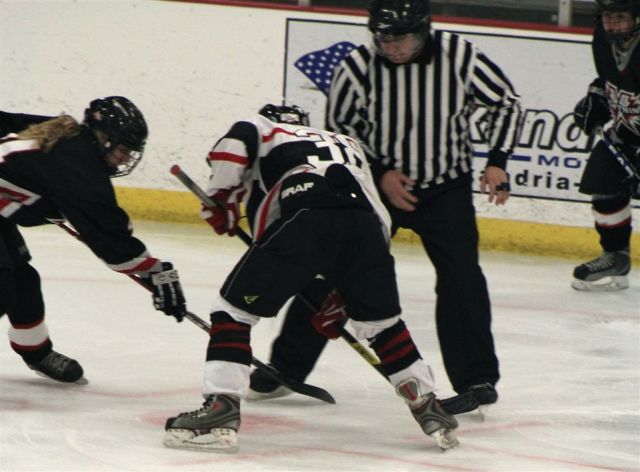 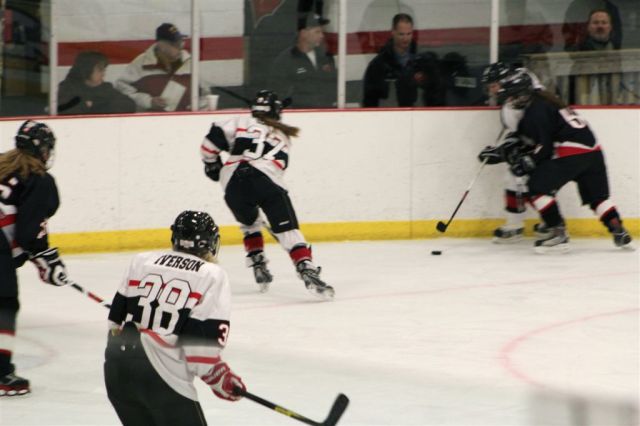 [This is the future – behind the glass.  It’s great when the young girls come to watch the “old” girls play – and have their heroes.] 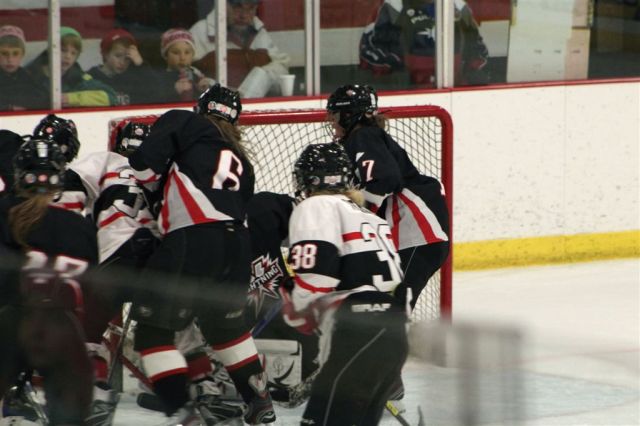 Melissa Drown scored to give us a 2 – 1 lead going into the 3rd period.  But for some reason, we came out really flat in the final period.  The Lightning scored early to tie the game and generally out-played us the entire period.  The Cards took total control of the overtime, but we couldn’t dent the net.

Also last night, the season-long battered and bruised boys’ hockey team lost 4 – 0 at Little Falls.  A stringer was present at the boys’ basketball game against a 17 – 3 Little Falls team and reported our Cards played their best game he has seen them play this year in winning 73 – 62.  And just when I thought I potentially had a complete posting for the day, the staff photographer uploaded his photos from the girls’ basketball game at Sauk Rapids last night.  So, here, in living color, they are: 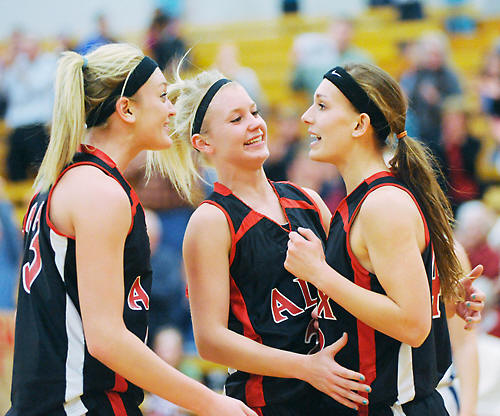 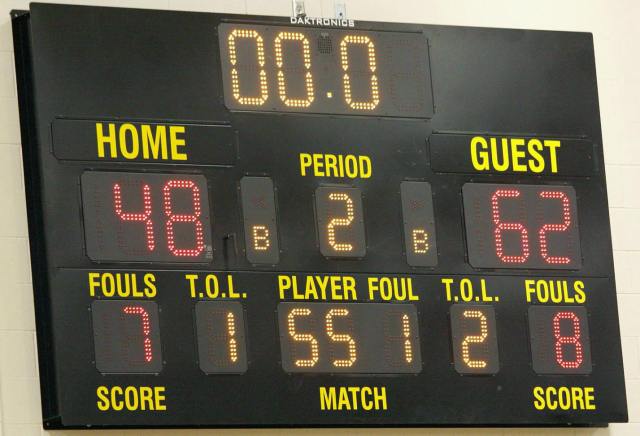 [The Cards built a 30-point lead and then everybody got to play.]

[Cara.  Made two 3’s.  Just what the Super Fans have been calling for.]

[Whitney.  Not catching the cold I just spent three weeks getting over?]

[The fan.  And a ref who apparently abondoned the game?]

[LT.  Binding yet another game-induced wound.] 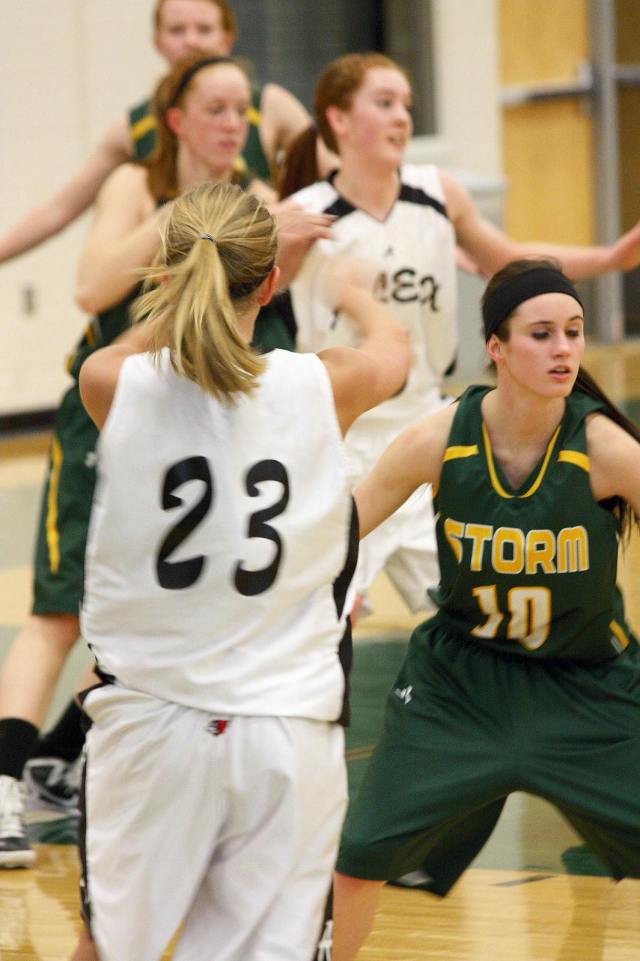 [Dani.  Looking for some friends.] 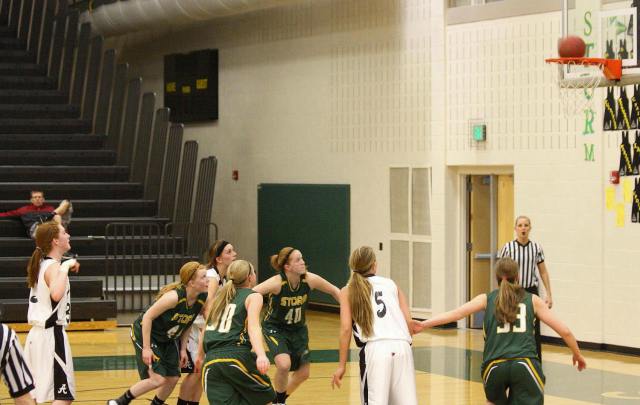 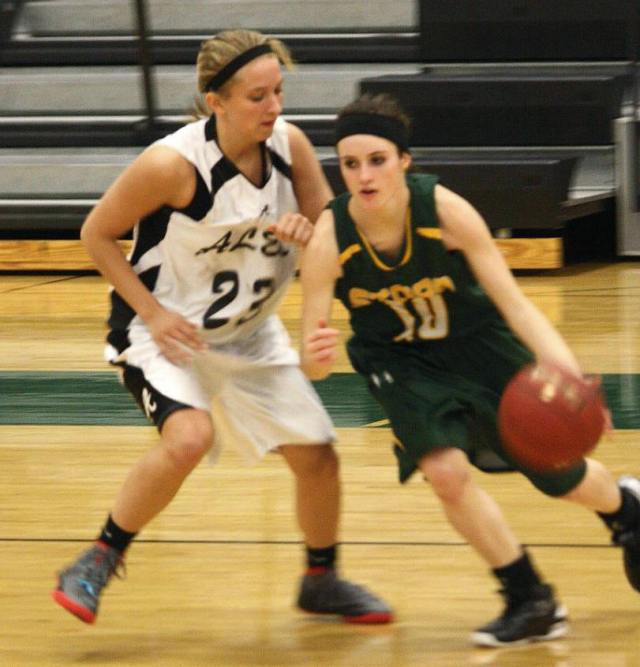 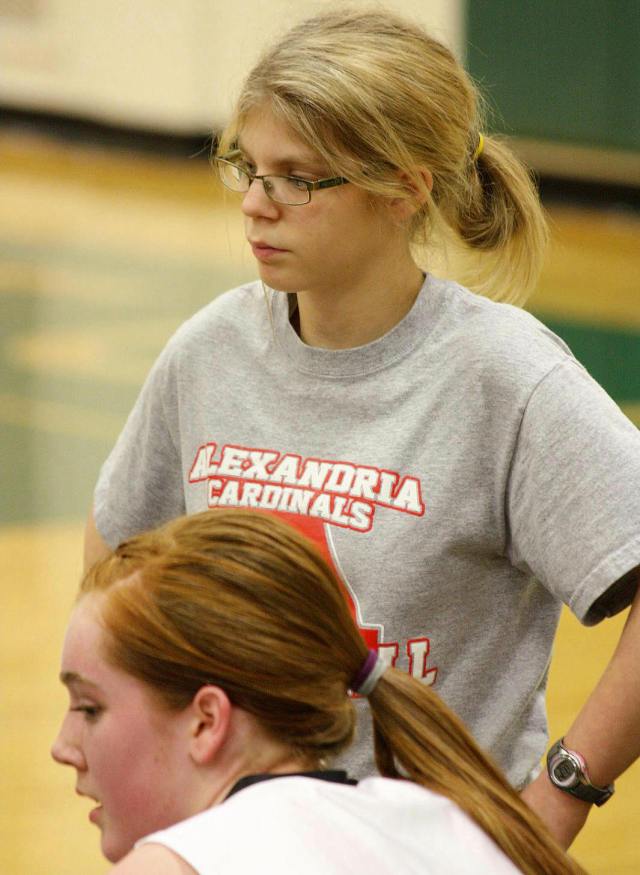 [The fan.  He deserves a tribute.  And it reminds I have been in this gym before.  The Card boys played Elk River for the section final here several years ago – we should have won.  I remember experiencing extreme envy at the time over Sauk Rapids’ new high school.] 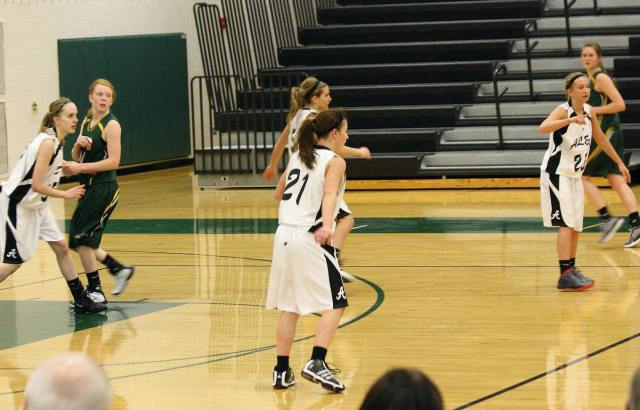 [The JV’s have taken over the game.] 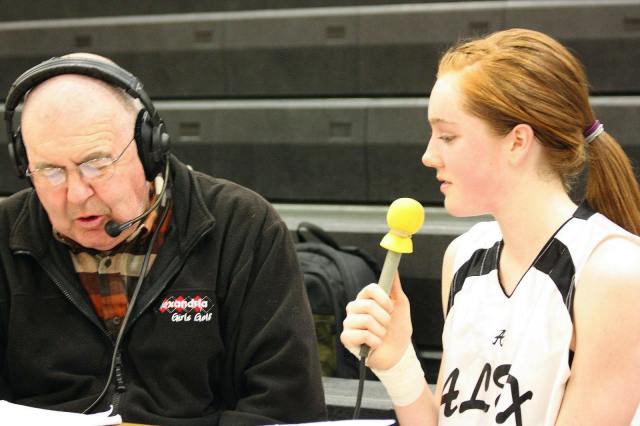 [Kalley was player-of-the-game, with 15 points.] 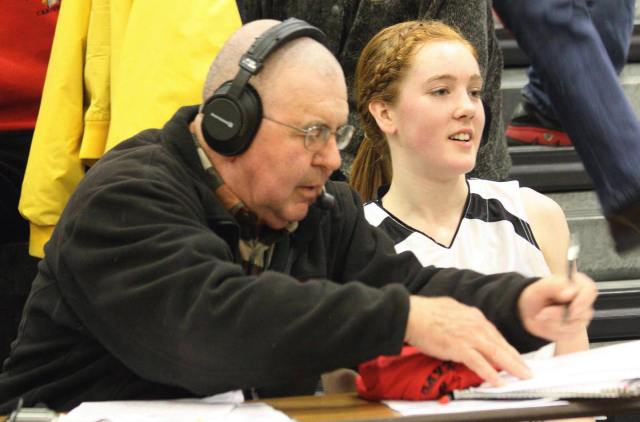 [Dave took the opportunity during a TV time-out to work on his taxes.] 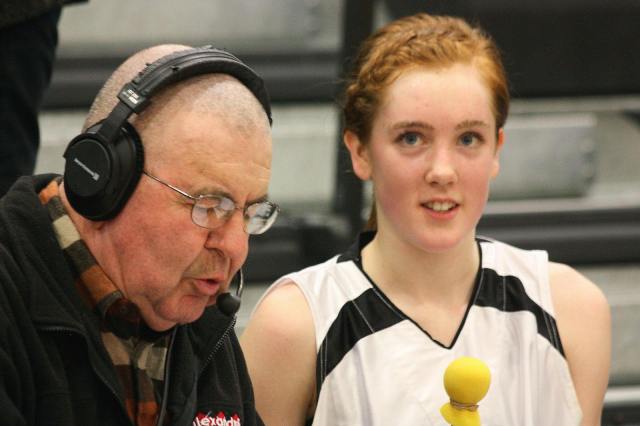 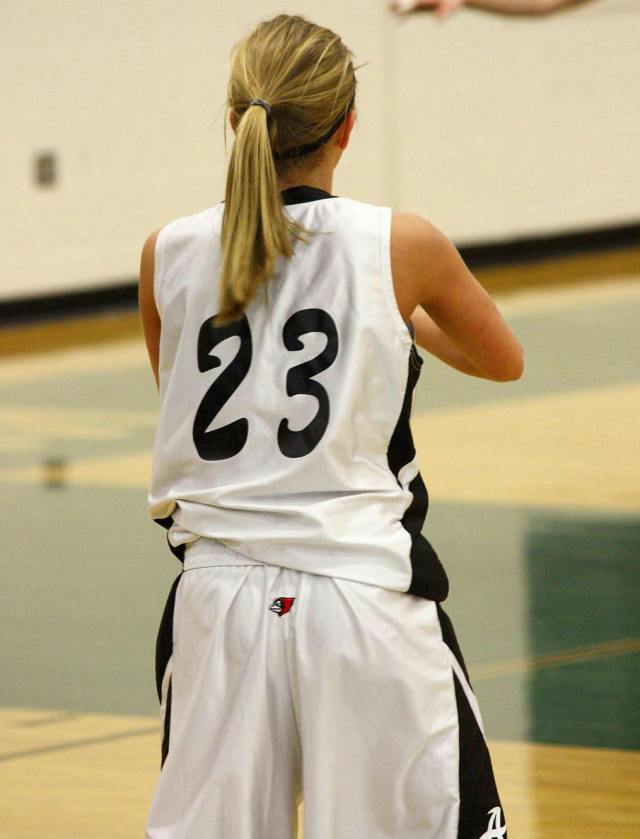 [Until the next game.]

However, to show our well-roundedness (“I heard that!”), the supervisor and I went to the second lecture at the museum marking the 150th anniversary of the 1862 Dakota (Sioux) Uprising.   The lecturer, Candace Simar, has now written three books on the subject.  The first, Abercrombie Trail, defines the eastern boundary of the conflict as along the stage trail from Minneapolis to Fargo – generally today’s I-94 – an area that includes Alexandria, and Fort Alexandria which was built at the time for the protection of the town people and the settlers.  Minnesota was the newest state in the nation at the time (granted statehood in 1858) – and marked the northwest boundary of the United States.  The Uprising led to the biggest mass execution in the country’s history, 38 Dakota were hanged on December 26, 1862 – a real black mark for the state. 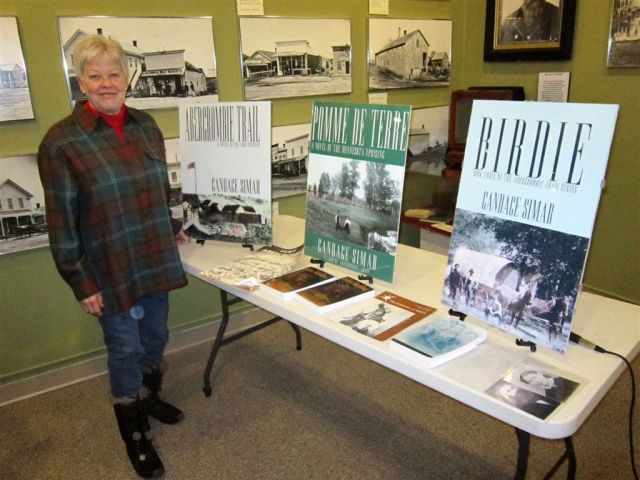 [The supervisor with the author.] 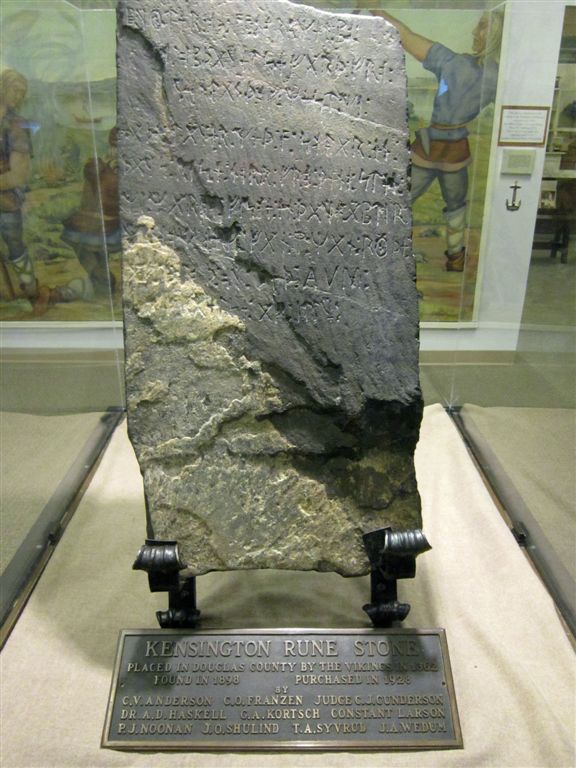 [Well, as long as I was there, the Runestone.]