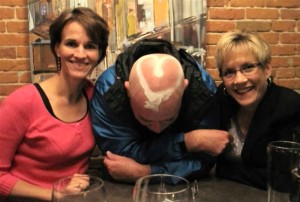 Give me a head with hair, long beautiful hair.
Shining, gleaming, streaming, flaxen, waxen.
Give me down to there hair, shoulder length or longer
Here baby, there, momma, ev’rywhere, daddy, daddy.

Let it fly in the breeze and get caught in the trees, give a home to the fleas in my hair.
A home for fleas (yeah) a hive for bees (yeah),
A nest for birds, there ain’t no words for the beauty, the splendor, the wonder of my:

But I digress.  Every once in a while I have fantasies about . . . combs.  But you will notice the accreditation for the song, Hair.  Because it is the right thing to do.  Because SOPA and PIPA are currently under Congressional consideration, and, under such, absent proper accreditations the blog could be sent to GITMO . . . and I would be unemployed! 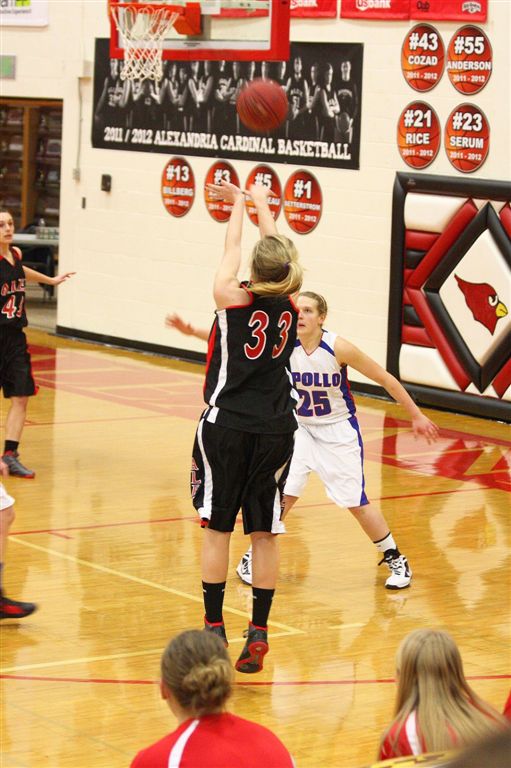 But back to the subject.  The girls’ hockey and basketball teams are on extended road trips – the hockey team was at Willmar on Thursday and won 3 – 0, extending their winning streak to four.  Our on-site stringer reported that Becca had two goals, one shorthanded and the other apparently just as the Cards returned to full strength, and Britni had the other.  Shelby assisted on all three goals and Becca assisted on Britni’s.  The bad news was that Kalley apparently suffered a concussion the previous game but was not aware of it until the next day.  We hope her a speedy recovery, but they rightfully are very careful now days regarding concussions.  Taylor Ellingson moved up to forward (now just using 4 defensemen) and got good reviews, in this game and . . .

Yesterday the Cards went to North Dakota to take on undefeated Fargo South (16 – 0).  The Cards gave them every thing they could handle – South won 7-6 in overtime!  Shelby had three goals, and Becca, Alia, and Melissa had the others.  Apparently at least 3 of their goals were on power plays, including one on a 5-on-3 – and their star player had 4 goals.

So, you may be wondering why we led with a girls’ basketball photo.  Because the staff photographer goes on the road with them!  🙂  This 1st batch is actually his from the home game against Apollo (we went to the Fergus hockey game that night).  The Cards led the overmatched Eagles 33-3 at one point, so Greg got to feature many players other than the starters. 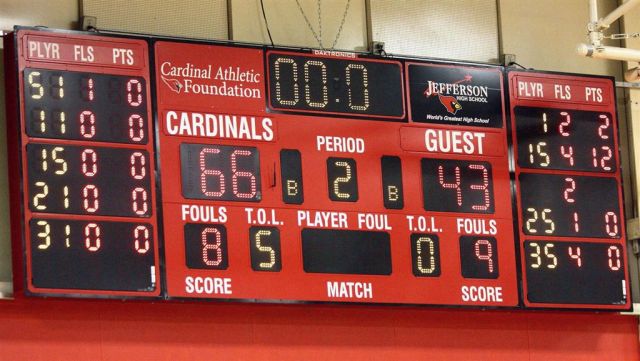 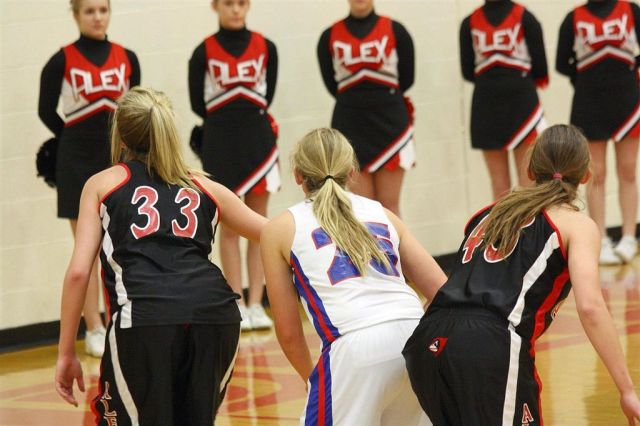 [Hmmm, seems to be a dearth of Super Fans at this game.] 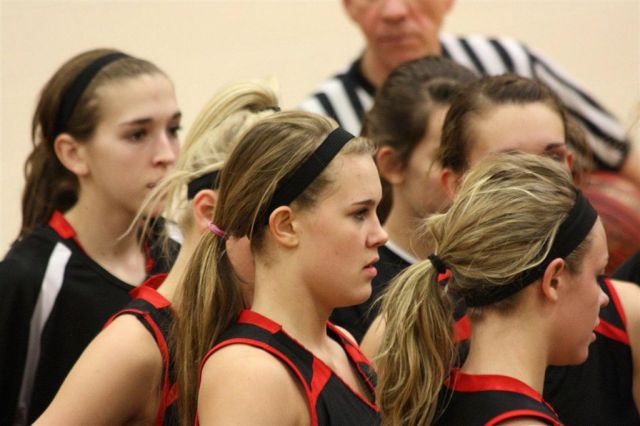 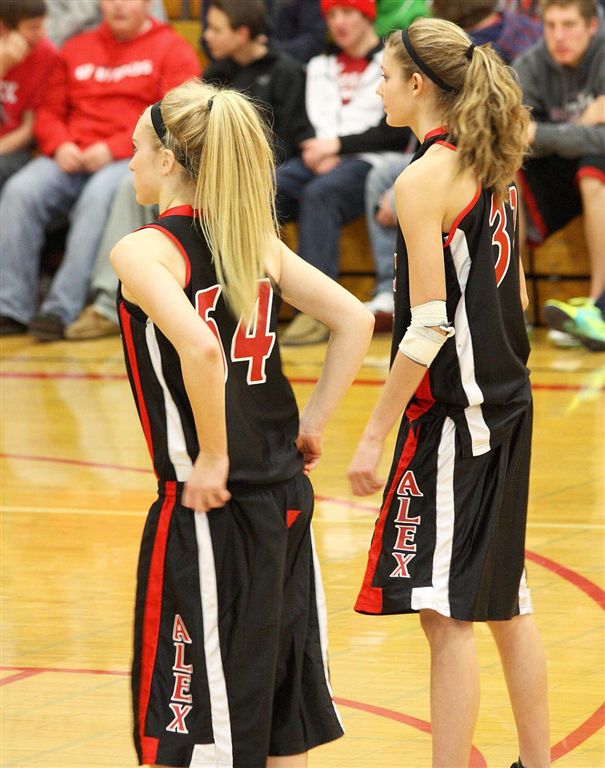 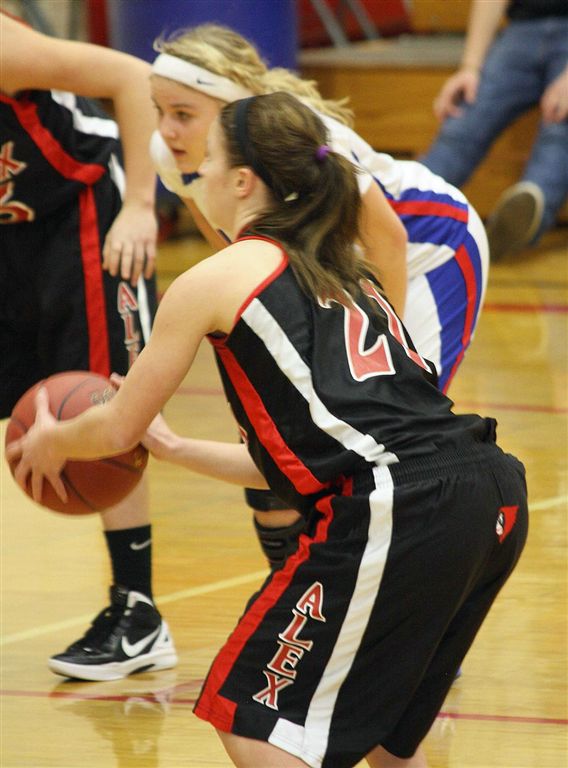 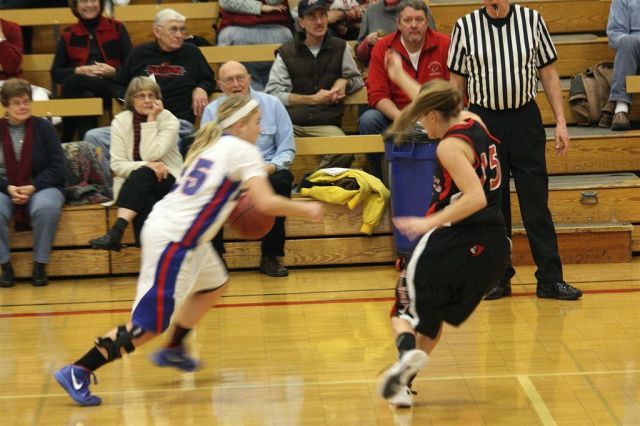 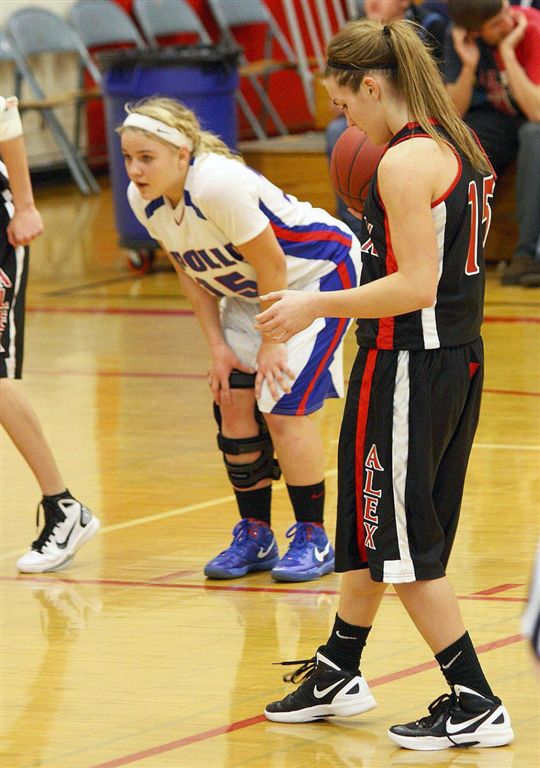 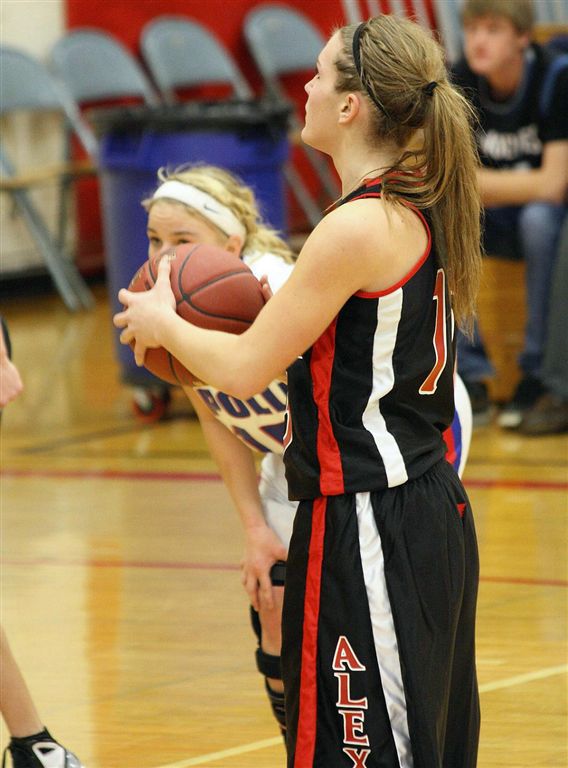 We interrupt basketball reporting for . . . Hockey Day in Minnesota!  Yesterday was hockey morning, noon, and night.  Beginning with the TV game between Grand Rapids and White Bear Lake – the Rapids won 4 – 3 (the Bears scored 2 goals in the last 2 minutes).  Then I really wanted to see the next TV game between No. 1-ranked Duluth East v. No. 2 Minnetonka.  There was a potential conflict – the Velines were performing at the winery.  But the supervisor nixed further outdoor adventuring – she had been to a 3-hour meeting in the morning and said it was incredibly uncomfortable outside with very strong winds.  We decided to stay in.   Minnetonka won big, 9-3, reversing the previously undefeated Greyhounds win against them, 6-2, in the Schwann’s Cup.  The Greyhounds were missing some players, but even so, if there is a rubber match, Duluth East looks like the more talented team.  We really didn’t need that extra “help” at 4:00 – Abby was going to be on TV!  Abby Williams’ Bemidji State Beavers were playing my No. 2-ranked Gophers at Ridder – but I had to cheer for Abby.  She played a terrific game, and the Beavers Slovakian goalie was outstanding.  The game went into overtime, and then to a shoot-out – the Gophers won the shoot-out 2-0, in the 3-3 game.  A fun game to watch.  The Cardinal boys’ hockey team was also playing at 4:00 at the RCC v. the always good St. Cloud Cathedral – I would have otherwise gone except for the Abby game.  The Cards lost 8 – 1.  Later that night, the boys’ basketball team lost a close game at home to New Prague.  So, back to basketball.

The following photos by Greg are from the Cards game at Sartell Friday night.  Sartell was a pre-season top ten team, but we had beaten them earlier in the season at our place.  Absent a healthy Kalli, however, this would be a very tough road win.  The Cards gave it the good ole high school try before falling 46-44.  We should be favored in our remaining games until the home finale against Fergus.

[The coaches, who are thinking, “I wish we could teach height!”]

[Kalli still has the bad wrist, too.] 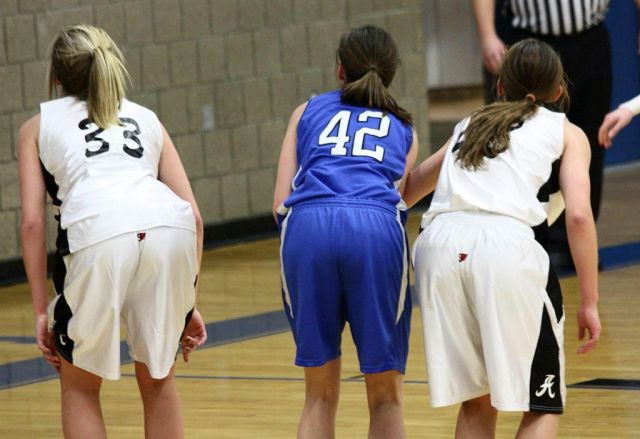 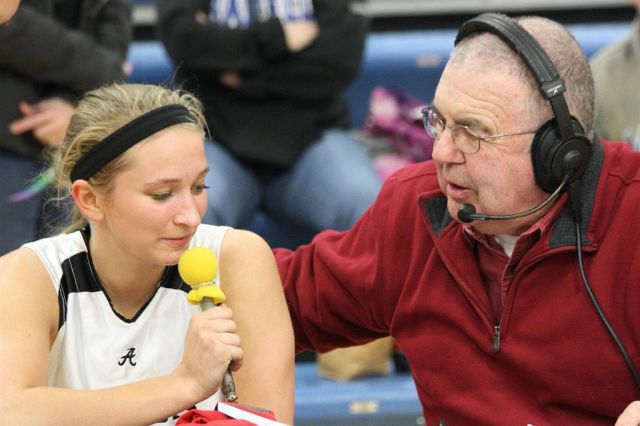 This final piece is offered as inspiration to the team, as all starters are 5’9″ or taller.  No less a roundball expert than Basketball Dan sent the following:

The Providence Friars [a long-time favorite of ours for reasons to involved to get into here] have a top 10 recruiting class for next year (rarity that 2 guys in the top 30 are from New England high schools). But the real reason for sending this is to suggest (in a time of snowy boredom) you Google ‘Kiwi Gardner’.  He’s a 5’7” from Oakland who was their star recruit for this year. Shockingly, the NCAA declared him ineligible for this season, not liking his transcripts from the 5 high schools he attended in the last 2 years.  You’ll find a YouTube of him scoring over 50 pts in some San Fran summer league game. Supposedly he’ll be a Friar for next season.  ~ Basketball Dan

The above video shows Gardner dunking in a high school game.  So, next game we expect to see all of you throwing down two-handed tomahawk dunks!  🙂