[This is the supervisor.  This is January 10, 2012.  This is the state of Minnesota.  This is a thermometer that reads 70 degrees in the sun (the official record high was 50 degrees).  Tulips are coming out of the ground, cottonwood trees are budding.  Heaven help us!]

Continuing our weather theme, we have “the guys” fishing in front of our place on Sunday.  Amazingly, there are still “permanent” fish houses on the ice, though several lakes now have vast expanses of open water.  I’ll have to go out on a photographic safari to see if anyone is . . . fishing from a boat!  We also had yet another in a series of beautiful full moons – these photos from Monday night.  And finally, some photos from Noonan Park yesterday afternoon.  The kids were out playing hockey in – tee shorts!  They could not play in the rink because there was too much standing water.  There was also open water on the east side of the pond.  Maybe they’ll be able to use the rink again by tomorrow. 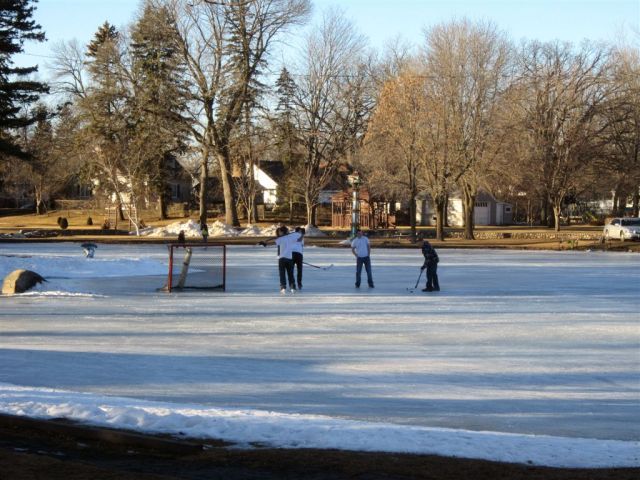 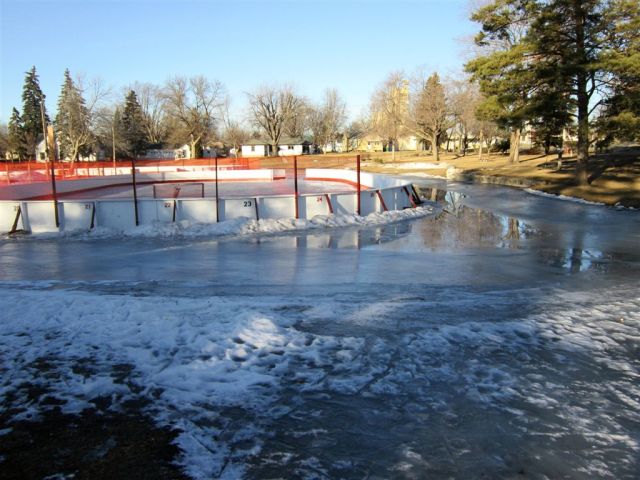 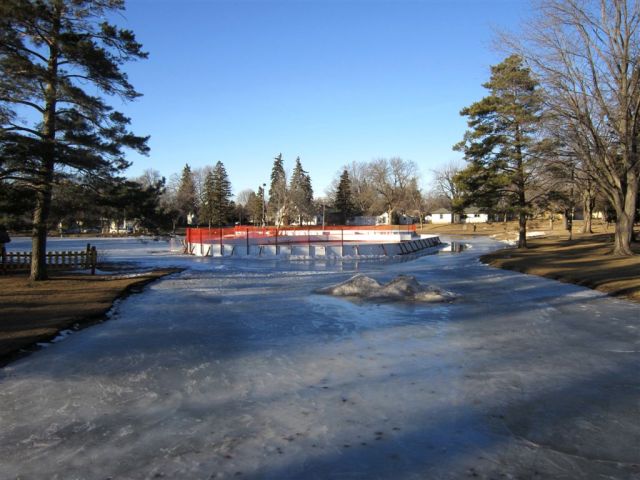 And then there was a girls’ basketball game last night v. the Moorhead Spuds.  By game’s end, our Cards’ record had improved t0 9-1 – and we are currently ranked 8th in the state in class AAA.

[This just in:  Take a look at the photo at the top of the page – about 15 hours later we’re enjoying blizzard conditions.  Ahhh, winter! 🙂 ]

[We always enjoy getting there in time to see a good part of the JV game.]

[Another good showing by the JV – playing better every game.  There are three girls pushing 6′ tall, and now just have to “grow into” their growth spurts, and a bunch of water bugs.  I think Kohler is going to be able to keep her run, run, run game going!] 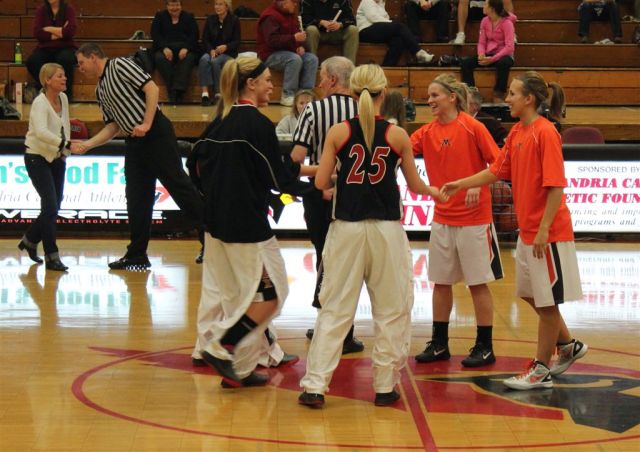 [“We remember the orange warm-ups.”]

[“Do you go see AC play for the Moorhead State Dragons?”]

[“Nah, the Kim Kardashian sighting was just a rumor.”]

[“The Pasty King of Alexandria!”] 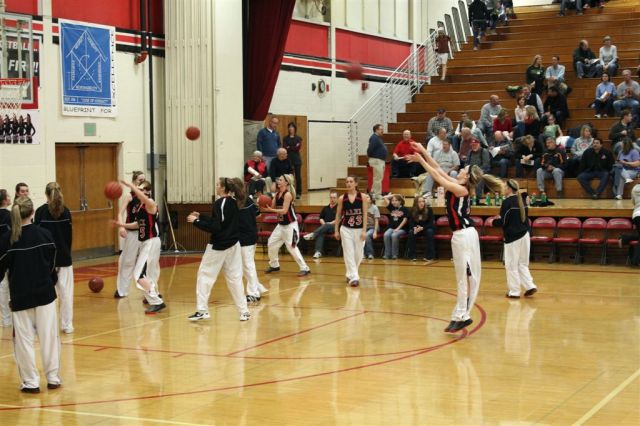 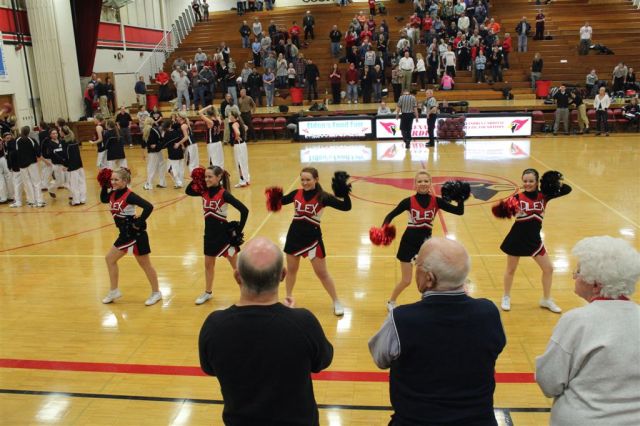 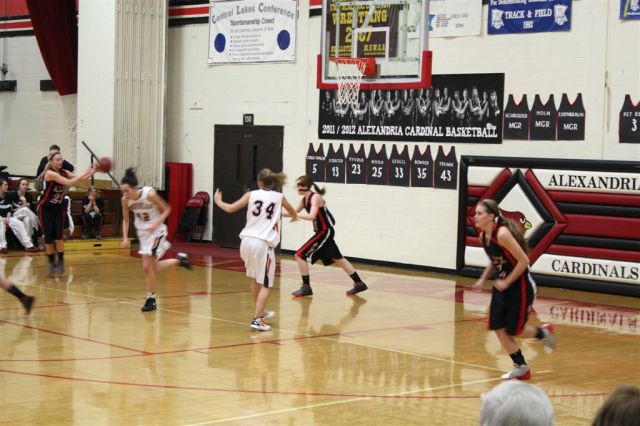 [“Commence running!”  Kalli played in this game – with the mask.  You could tell, though, it really affected her depth perception and peripheral vision.]

[Good box outs by the Spuds.] 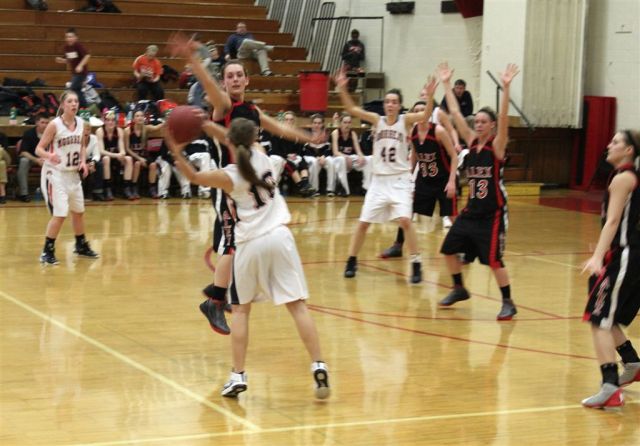 [One of a hundred such leaps LT performs every game in an effort to deflect or steal a pass.  Why?  Because many times each game she is successful in that endeavor.] 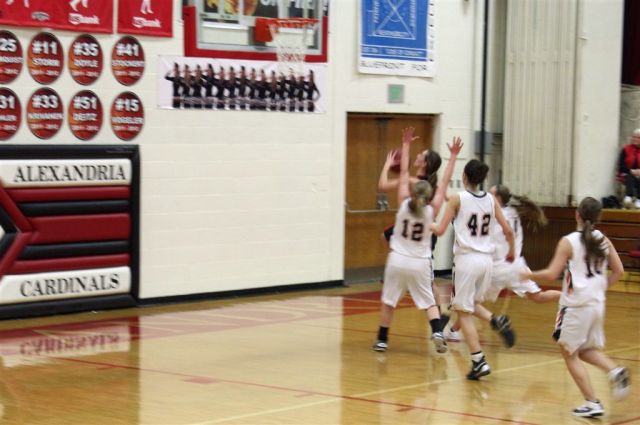 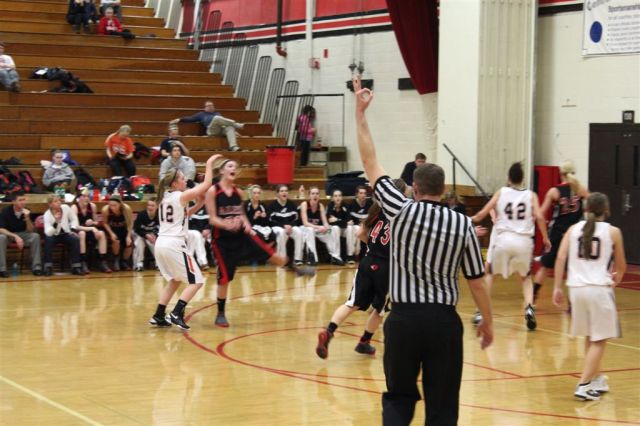 [The Spuds launch a 3 attempt.] 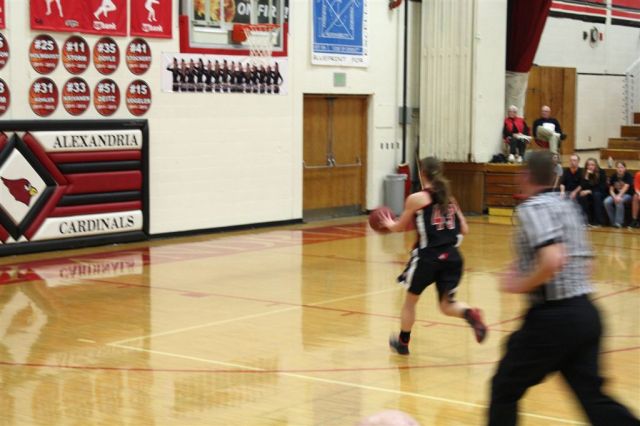 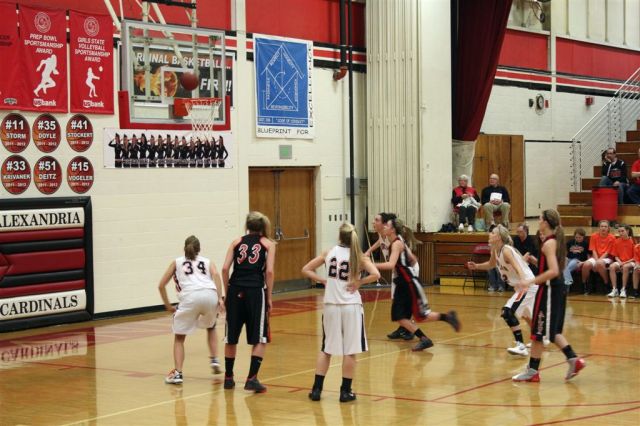 We interrupt this photographic interlude for the requisite video.  As usual, I shot the beginning of the game.  Not pretty, I deleted it on the spot thinking the start of the 2nd half would be better. It was.  This is something the troglodytes do not like to hear (because it’s true).  In this clip you will see constant offensive movement by both teams – something you seldom, if ever, see in most boys’ games, regardless of level.  I am always amazed at the conditioning required to do this because they work so hard at the defensive end.  Also in this clip, you will see a steal, and length of the court dash for a lay-up, by LT.  You will also see her pick up 3rd foul with over 14 minutes left in the game – that was a concern.  But she fouled no more.  You will also see what has become our best offensive play – I think it has worked every time.  Whitney inbounds from under our own basket to Amanda C, Whitney then jumps into play to Amanda’s far side from the basket, Amanda fakes a hand-off or pass to Whitney, both defenders move to Whitney, and Amanda drives the baseline for a layup.  And the Cards always push the ball up court (which can some times lead to boo-boos):

[Although not on the video, we ran the wheel play to perfection again.  Amanda C hit LT with a length of the court pass – I think LT still had to whole half-court to herself by the time she made the lay-up.]

[Whitney and Cara bring it up.] 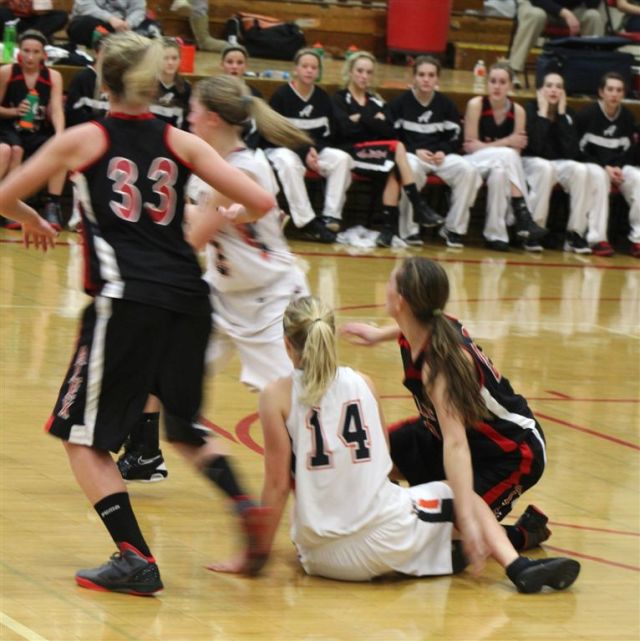 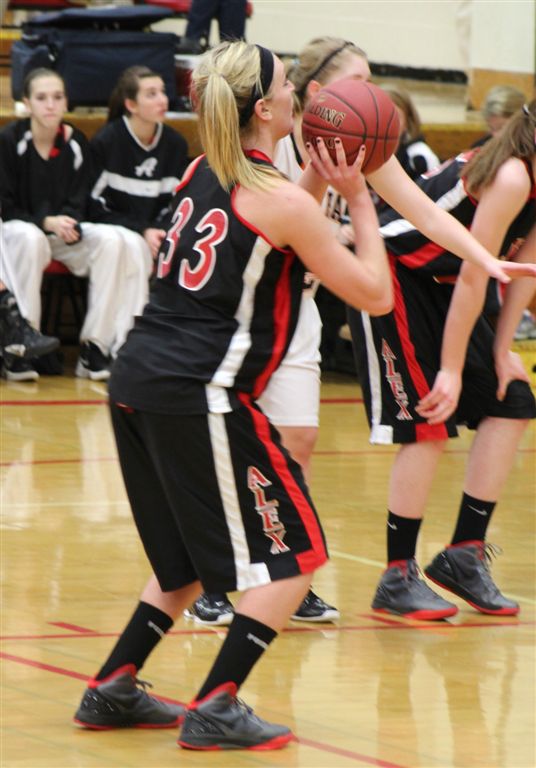 [Whitney – had a terrific game as you will see on the scorebard stats below (16 points).  She is getting out on the break for lay-ups more all the time.]

[LT – started slow for her but ended with her usual 25 points.] 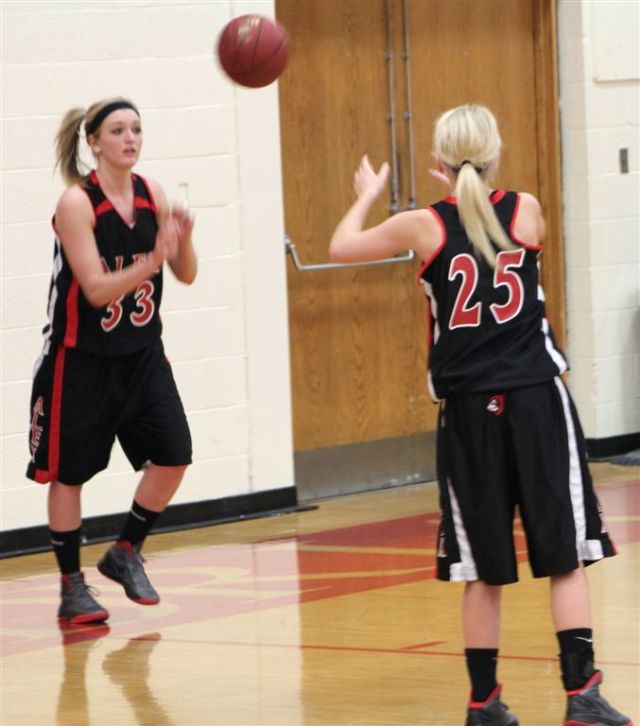 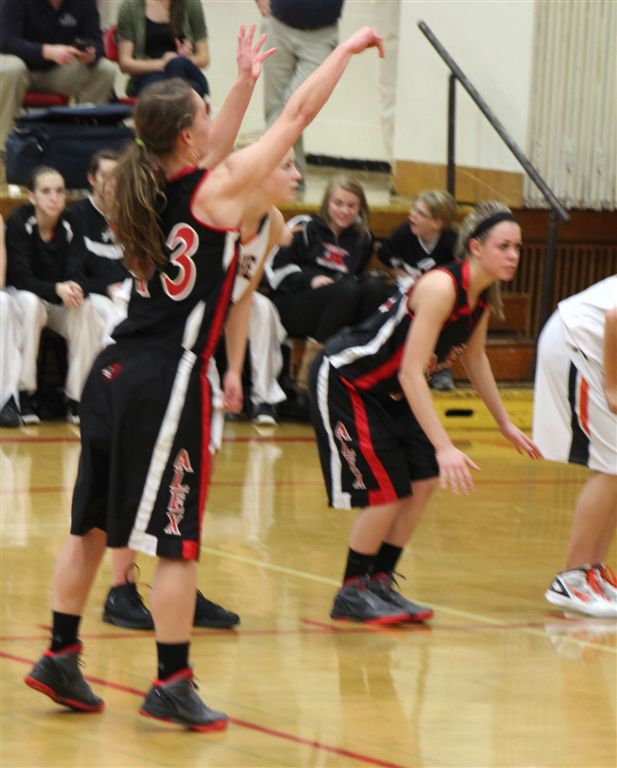 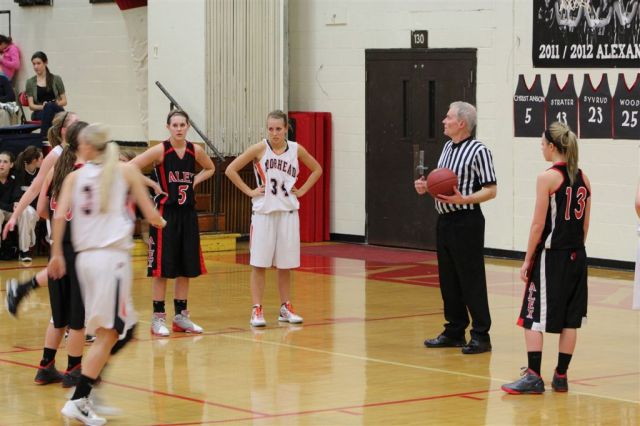 So, next Tuesday is the first BIG GAME OF THE YEAR.  We travel to Fergus to take on the No. 1 ranked team in the state (class AAA).  Looks like a good time for the first Super Fan road trip in a couple of years!  Hey, Otters: