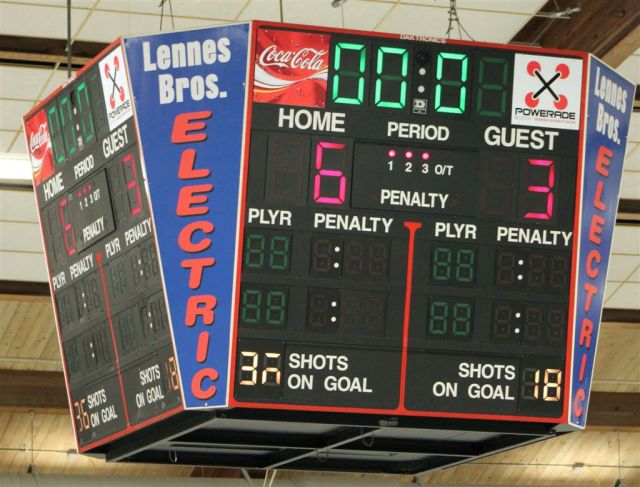 [Except this time it’s the girls’ hockey team.]

[The gentleman on the left caught us on the way in to the arena last night and chided me for not posting the girls’ basketball game from the night before.  Ever anxious to please, I was up at 2:15 this morning and finished the pum’kin pusher report shortly after 6:00.  Last night was our 4th game in 5 nights – the synapses are getting a tad clogged and probably need a vinegar rinse (did wonders for the coffee maker this morning).  Then I dove headlong (without first checking the depth) into this hockey game report only to realize I had taken over 100 photos and two videos.  I gotta cut back!]

But first the JV game – one must always prepare for the future.  The supervisor and I arrived an hour before the varsity game started, so we got the see the entire 3rd period of the JV game.  However, despite our early arrival, our usual seats were already taken?  Don’t mess with the habits of older people – we then tend to wander around in a perpetual state of bewilderment.  Finally, we settled on some seats off the red-line – would the other Super Fans be able to find us upon their arrival?  We were now invading the parents’ section, though they didn’t seem to mind. 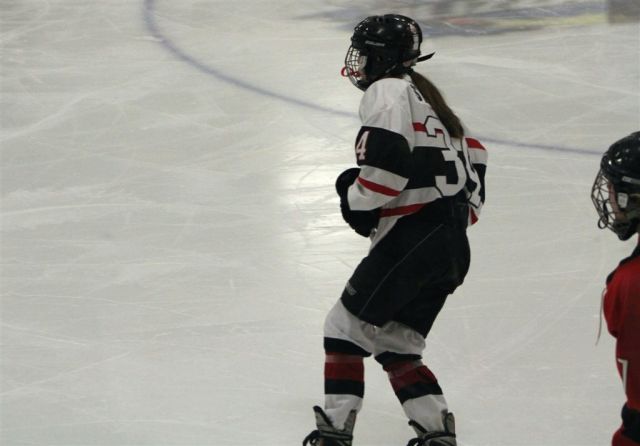 [Micaela Swenson (34), freshman forward, a whole career ahead of her.]

This was a statement game.  Our Cardinals were very optimistic about this season – despite an incredibly difficult early season schedule (games 4 – 10, all on the road, against mostly class AA schools).  Our 2nd game was at Detroit Lakes, a team we had easily handled in a pre-season scrimmage – we lost, 4 – 2.  So, the Cards started on a bummer, but are now 6-3 over their last 9 games.  We’re looking good.  We lost by one goal this week at Sartell-Sauk Rapids, a class AA team, and we outplayed them.  We hoped a little “revenge” factor against DL would keep our momentum going.

It was parents’ night.  Rather than the usual parents and daughters on the ice, this year the parents stayed in the stands – with our total lack of winter, nobody’s had any practice walking on ice yet this year!  So the players lined up on the ice, passed a microphone down the line, and each one introduced themselves and their parents – and said things like, “I love you,” and “Thanks for letting me get that tattoo” (OK, I made up that last part).  I will post all the photos here  – mostly for the parents.  (If you want identification, a roster is posted somewhere herein.) 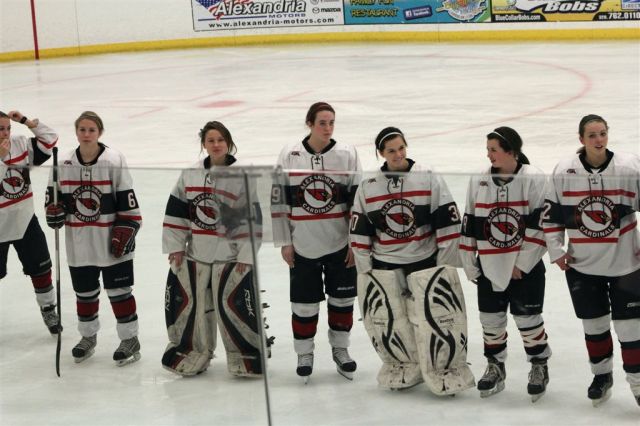 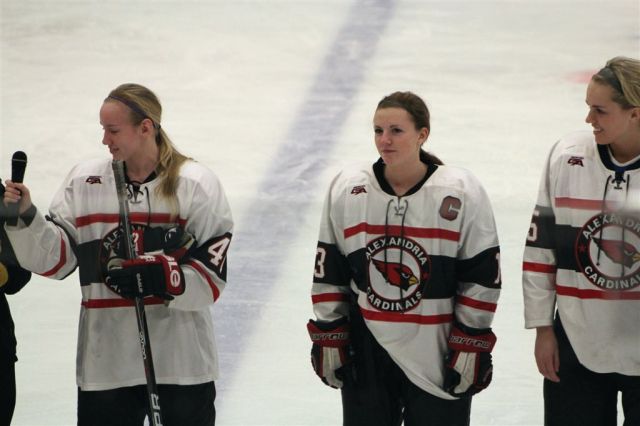 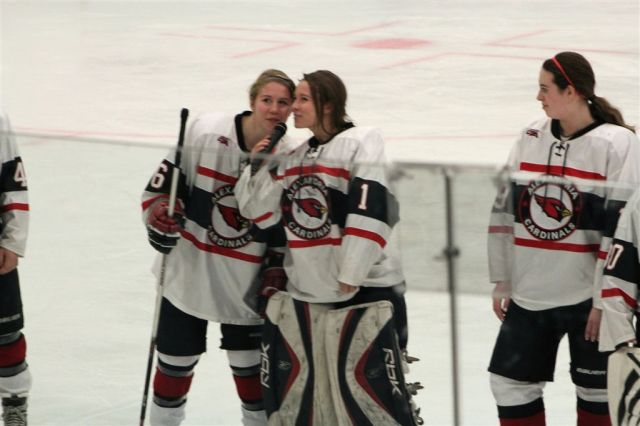 Shortly into the game, we committed a turnover in our own end, their best player soloed in and put in a backhander.  Well, that made us so mad we immediately took back-to-back penalties and found ourselves on the short end of a 5-on-3 power play.  DL scored again!  Ooops!  (I had videoed the 1st 5 minutes of the game as I usually do – I deleted it from the camera because who wants to see the other team score?) 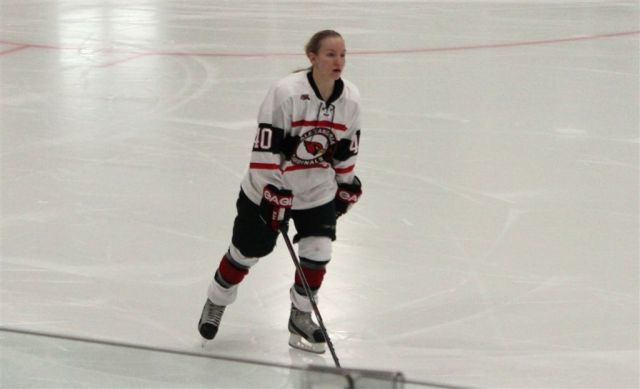 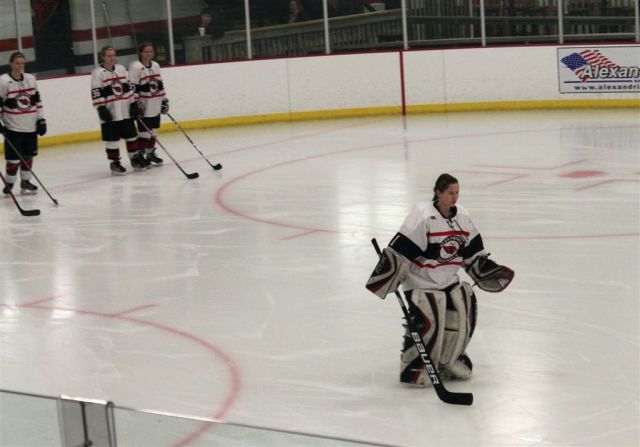 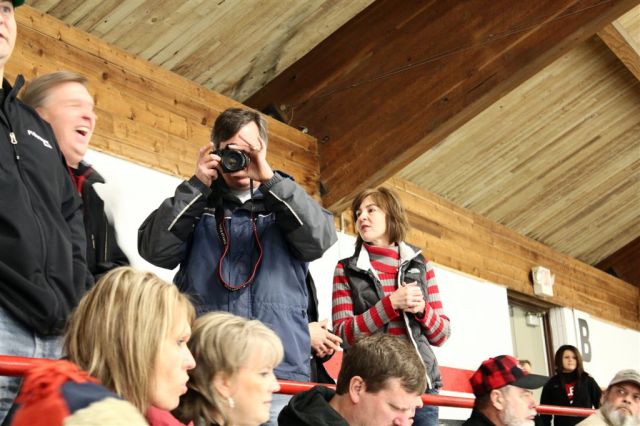 [Greg Trumm, super senior staff photographer – bookended by Shelby’s folks, who no doubt explained what the different colored lines on the ice are all about.] 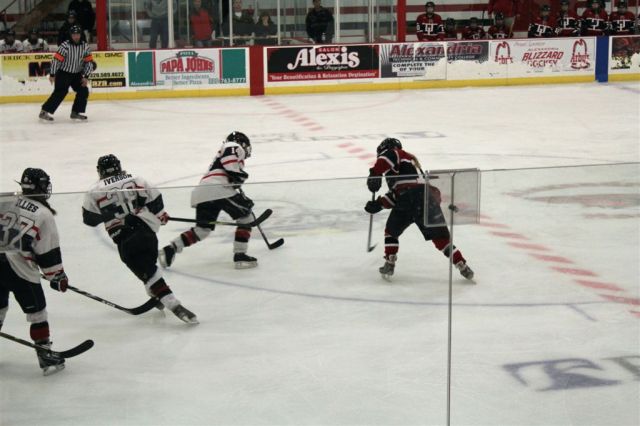 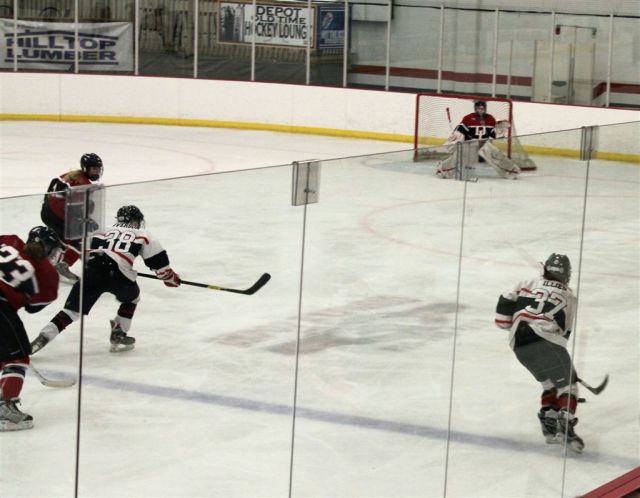 [Shelby Iverson (38), junior forward; and Becca, swooping in on net.] 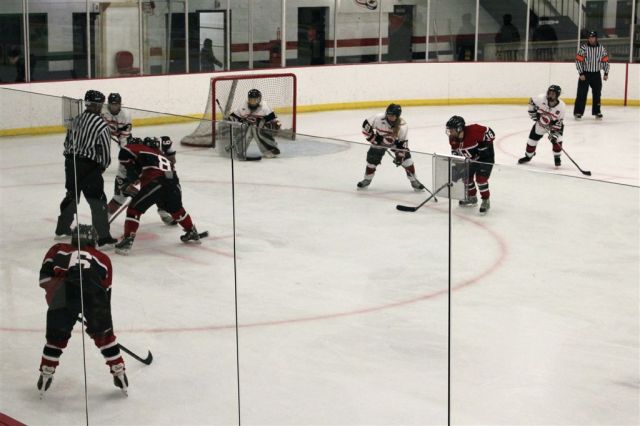 From that point on, I thought the team skated better than at any time over the past two seasons (there may be several reasons for this that will be enumerated as we roll along).  We caught the Lakers by the end of the 1st period and were totally controlling the game.  Here’s where your reporter will have to admit to certain gaps in the ole memory files – I don’t remember who scored our goals?  (Back in the good ole days (a couple of years ago?), I could come home from a 10-0 game, remember who scored every goal, and in what sequence!)

The video from the start of the 2nd period.  We scored a goal during video.  I somehow missed it – pathetic!  I think Kalley got it:

[The cheering you hear in the background (some would say shrieking, but that would be imprudent of me) is from the supervisor.  We both awoke with sore throats today.]

[Though not big, Kalley’s game is like a pass rushing defensive tackle – get out of my way or I’ll run you over!]

[The were some recent line changes to check different combinations.  Here Kalley is centering Rachael.  They were on different lines before with Rachael as a center and Kally as a wing.  Seems to be working so far.  🙂  ]

[Brit and Becca break out.] 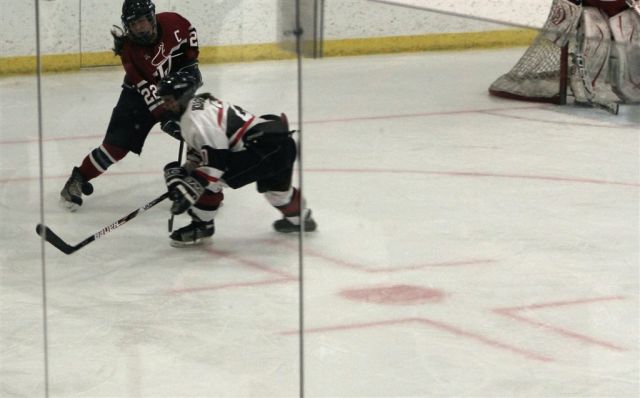 [Alia, probably our best stickhandler and shiftiest skater.  Made several nice forays through the enemy defense – and scored the one goal I do remember.  I think it was the last goal of the game – she zig-zagged between several players and put a wrist shot in the upper right corner.  Just a beautiful goal.]

[Shelby, Becca, and Brit on the attack.]

[It appears to be a GOOOOOAAAAAAALLLLLLLL!]

[There is no hugging in hockey!  To do so is a 10-minute major misconduct penalty.  Unless, of course, it’s after a goal.  Then you can hug.  For a little bit.] 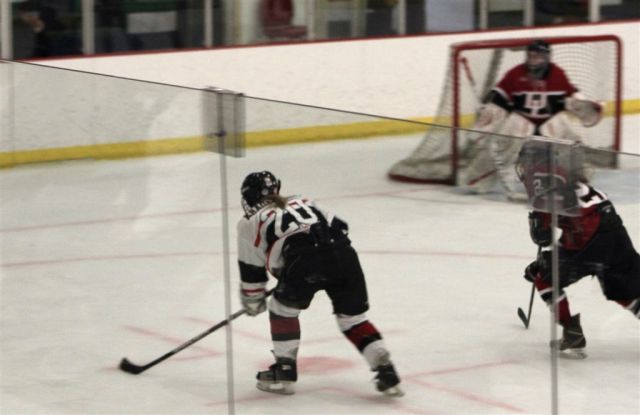 [It’s not unusual for a head to pop up when there’s a flurry at the goal mouth.]

[The score after the 2nd period.  Still close, but we’re well in command.  I predicted an 8-3 final at the time.  We were wearing them down.]

[This was Val’s first hockey game, ever.  It was Greg’s first girls’ hockey game, ever.  They liked it.  And when I said we would enumerate factors that led to the Cards’ well-played game?  Well, this is one of them.  The Trumms now must attend all hockey games for good luck.  Also, the team is now 2-0 when Barb and Roger sing the anthem – get used to them doing it!  And three, the Super Fans changed seating positions, if not by choice.]

[Another flurry – DL’s freshman goalie played very well.  (For what it’s worth, the supervisor noticed that both their goalies are “Veronica.”] 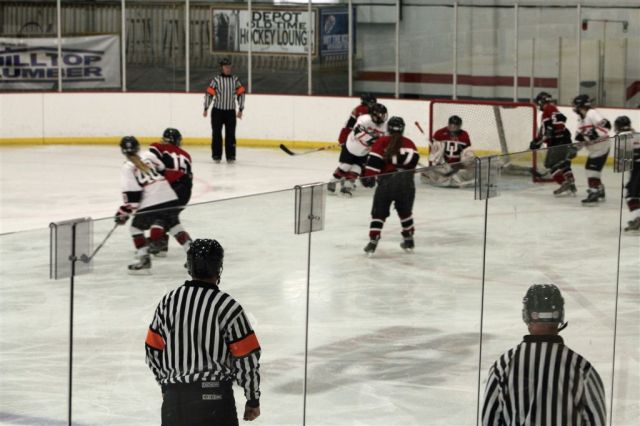 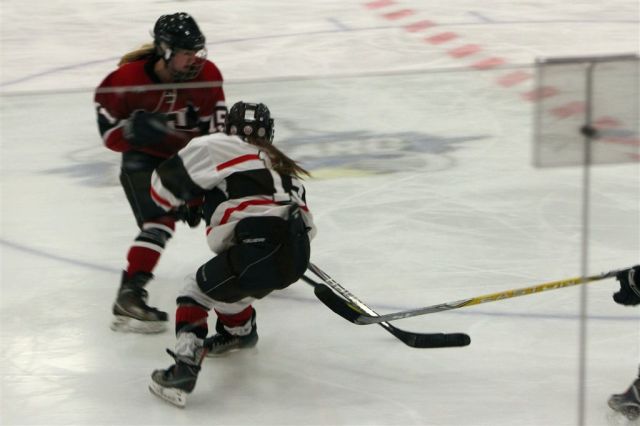 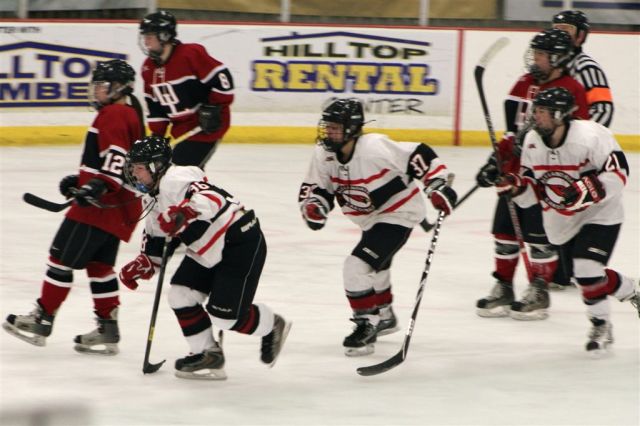 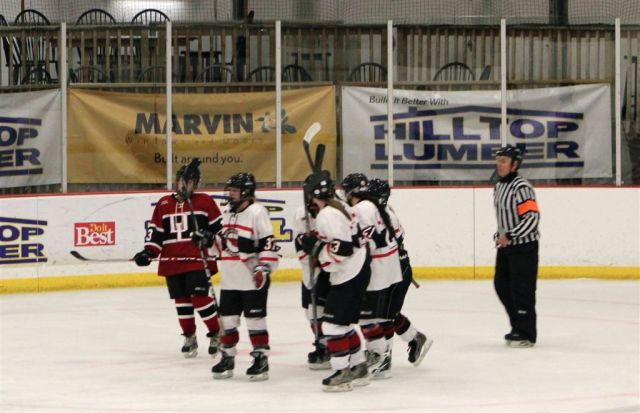 [Pizza in the Warming House after the game – anthem singer, Roger Riley, in the hat.] 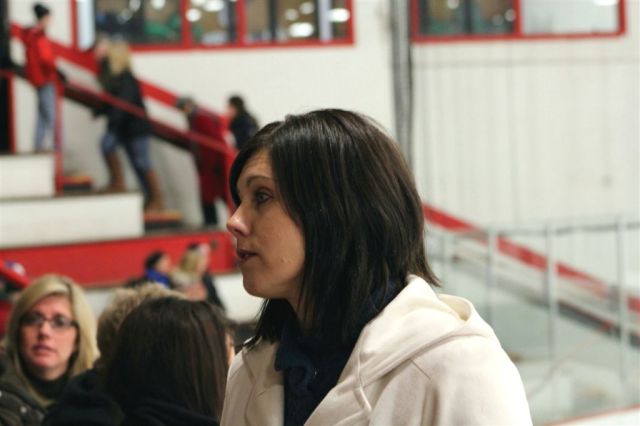 [This is Chris Kragenbring.  She is Quinn’s and Kalley’s mom.  She is a high school English teacher.  She uses the blog as an example of “how not to.”  I do not charge for this service.  (Thanks again Chris for the chili feed tickets.  The supervisor will “get you back” at the silent auction.)]

Just for fun.  The HQ was never, ever a sports fan.  But now in her grandmotherliness, she has discovered that all grandkids in Minnesota play hockey.  So, now she lives at the rink – and apparently is starting to like (?) it.  This weekend grandson Willy’s Minnetonka Pee Wee team played in Sartell.  The HQ went along to visit old haunts at SCSU – and filed this report:

3rd game will be tomorrow at 12:30…I have a date with a horse but Will is going up to cheer.

Met your (Alex) city attorney (retired)…live on Latoka, forgot their names, good friend of Bill Grove…..anyway, they have a grandson on Willy’s team 🙂

end of report [And of mine as well]