As usual, it was all about the “D” again.  The Cardinals tenacious defense led to a lot of easy baskets in their win over Sauk Rapids-Rice last night.  (We had to miss the St. Olaf choir on PBS – does anyone know if they replay it?)

We interrupt this report for . . . yup, what the heck is the deal with this weather?  I left for the “Y” this morning and was surprised to discover that, on the first day of winter, it was raining – at 27 degrees!  I thought, bright guy that I am, this isn’t going to be good.  Yet I continued on.  By the time I got in the vicinity of the “Y” an attempt to enter a turning lane almost turned me into a ditch – that sideways slide convinced me to head back home, joining the other traffic going no more than 20 mph.  I made it!  The good news is – hey, the days start to get longer now!  The bad news is – our living room TV isn’t working this morning (we’re getting just snow, unlike the weather!), so now we’re waiting for the cable guy.  As we say here in the middling part of America, if it’s not one thing, it’s another!

The game featured the first appearance of the season by Robo and Walleye Willy – as well as usual Super Fans, Ruth and Bud (who similarly prefer the girls game), and Alice and Rollie.  And Beth and Myrt were also there.  Also present, home for the holidays, was last year’s entire starting front line of Sam Trumm, Alli Haar, and Joie Warnes.  Meanwhile, back at the game . . .

[OK, second it was also parents’ night – class of 65er, Bud Bruzek (black vest, center) was there on behalf of sophomore daughter, Sarah.]

[We have to gig Bud here (photo from 2 weeks ago) – it appeared he left the game early last night when the outcome was no longer in doubt.  Sarah played the last several minutes and scored 6 points!] 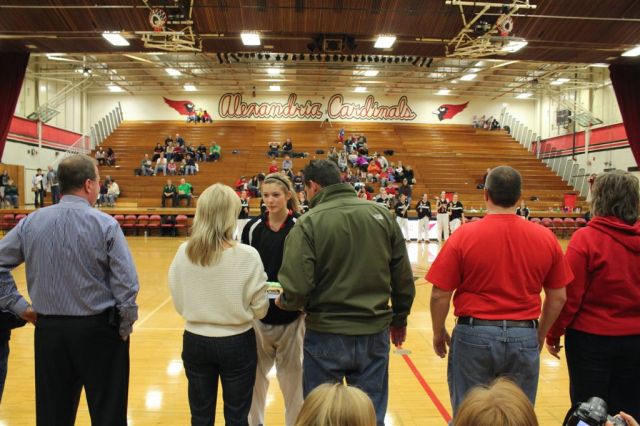 [Emily Thul – as you can see, my vantage point was not conducive to complete coverage of all the parents.]

[8:00 am, KXRA is reporting that school buses have pulled off to the sides of the roads and will wait for icy road conditions to improve.] 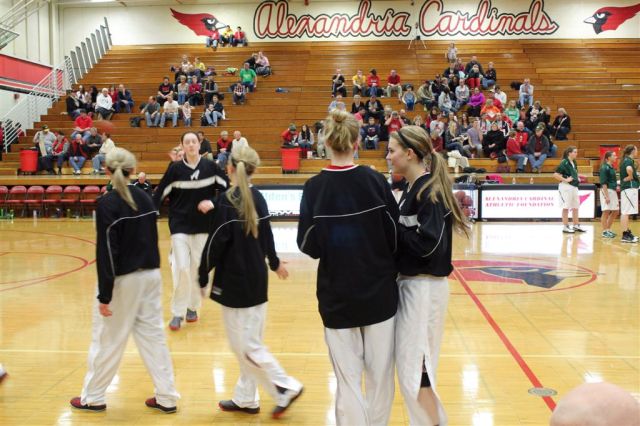 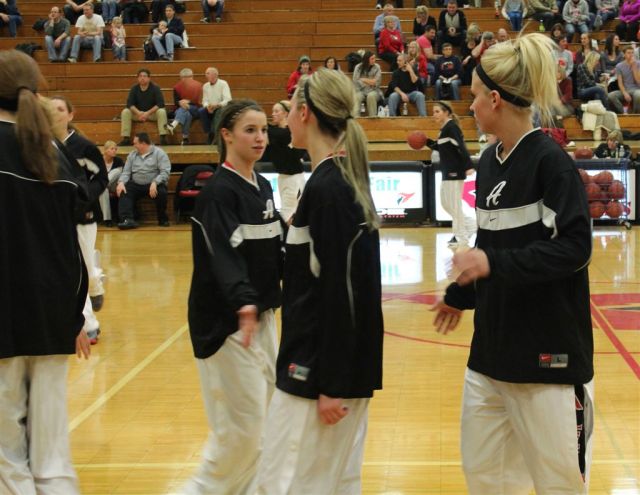 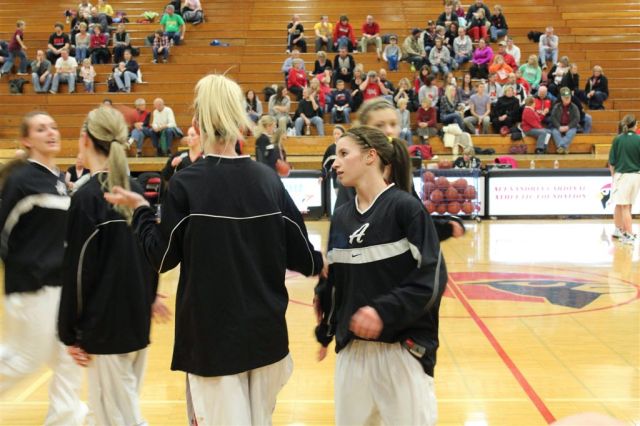 [And to think we always call the Detroit Lakes teams the “All-Blondes.”] 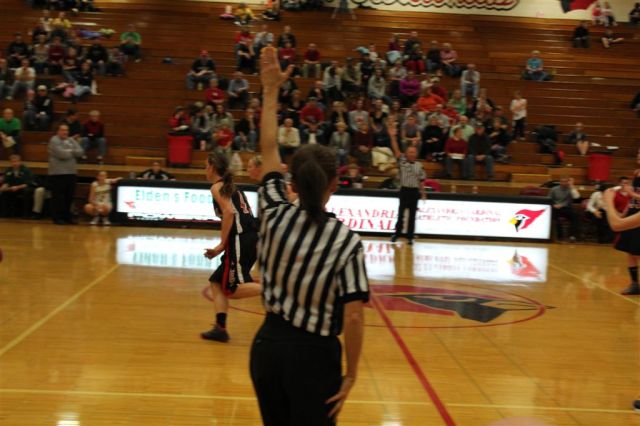 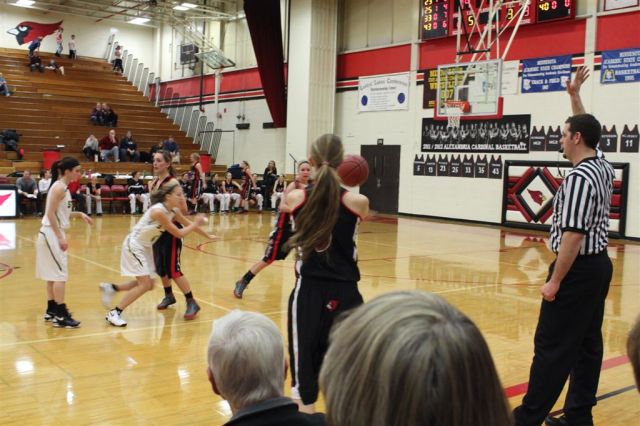 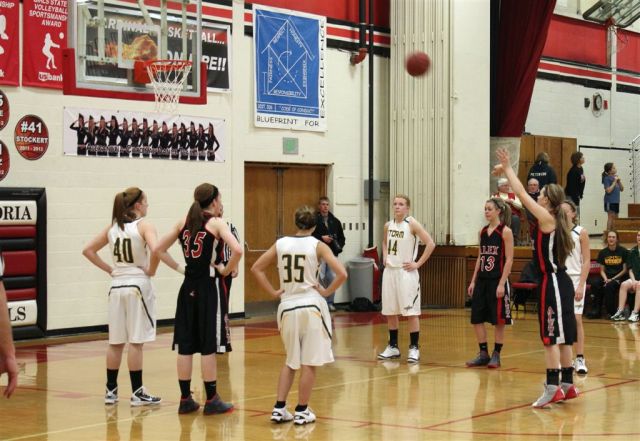 [Her reaction to that (as previously advised, this photo will have multiple applications)!  To her credit, she proceeded to hit several shots from the left base line, including a 3, and finished the game with 21 points!]

[Schools are closed.  Cable TV guy came and fixed it in two minutes.]

Secretary of Defense:  Seems a good time to feature LT at the top of the 1-3-1 defense – you can hear Robo and I discussing such in the 2nd video (where I called Amanda, Angela, her older sister’s name – just another old guy ooops).  Here are the two videos from the start of the game:

Lauren starts her “D” at three-quarters court, keeping herself between the two opposing guards.  In that position, she can pick off any bad passes between the two.  Once they make it to the front court, by being in the middle she funnels the dribbler to either side which allows the wing defender on that side to join her in an immediate double team.  The team does an excellent job in that defense of always being able to flow as a team and immediately double-team whoever has the ball – yet keeping full coverage in the passing lanes by the other three players.  It’s certainly no fun for the loyal oppostion!

[I was able to capture one of her “punts.”  The fans love it when she launches one into the stands – often several per game.  Last night one of her kicks hit the backboard – almost a field goal field goal!]

Readying for the 2nd half, the team looks for pointers from the Sauk Rapids dance team.

[Amanda leaps out of the frame.]

[Cara – looking for her offense more, scored 6 points on feeds while she was cutting to the bucket.] 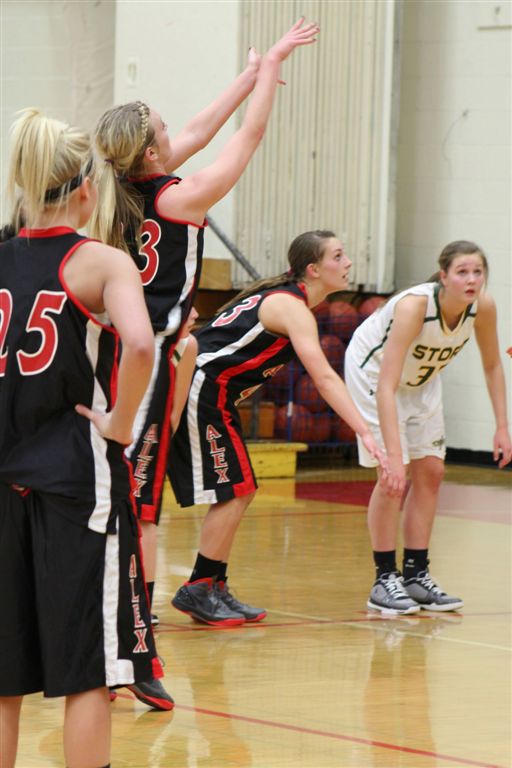 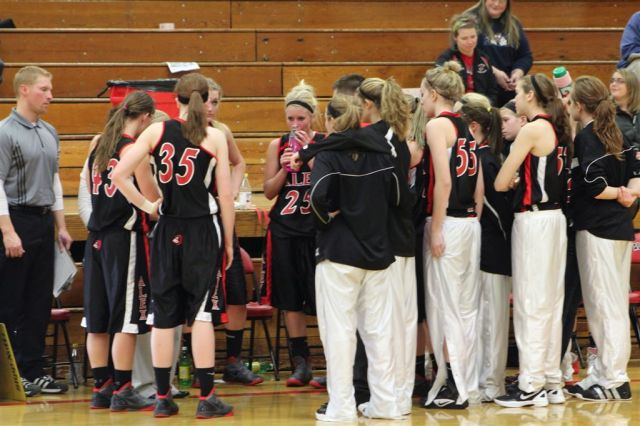 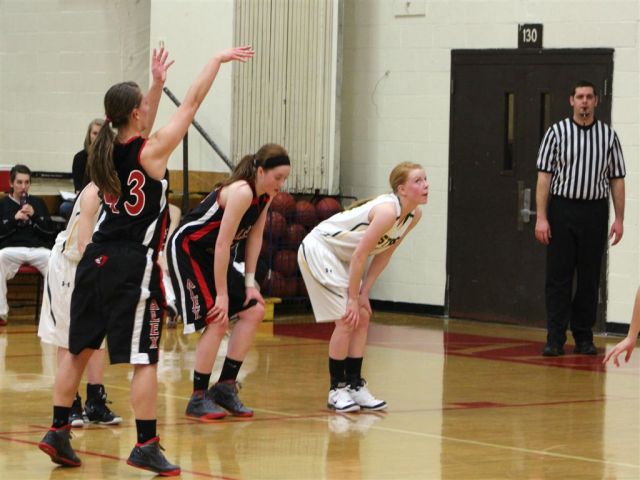 [Jess and Whitney head up court.] 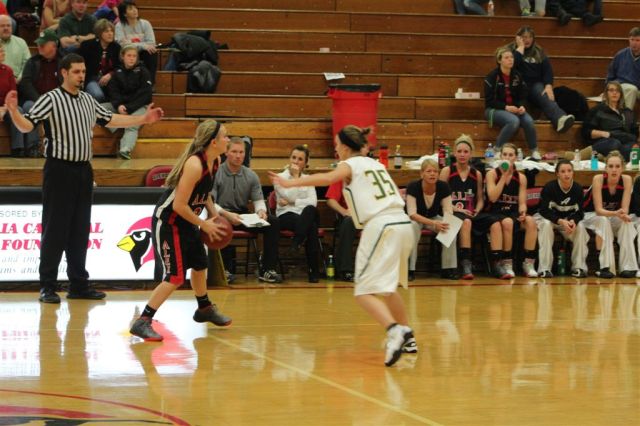 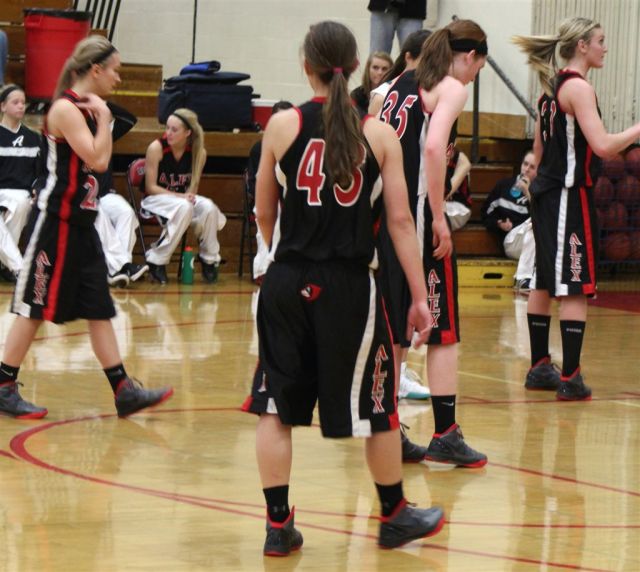 LT finished with 26 points and 9 steals, Kalli had 10 and Whitney 9 for nice balance.  The Storm had an excellent player in a Ms. Becker, who had a good all-around game with over 20 points, and we think she swished every free throw – in fact, we recall the Storm only missing one free throw the whole game, possibly making something like 19 of 20, or better.

In other games last night, the girls’ hockey team lost 3 -1 at the St. Cloud Icebreakers.  It sounded like a lot of the games this year – we had territorial and shot (31-22) advantages but couldn’t score.  Kalley Kragenbring got our goal on a power play with an assist from Shelby Iverson in the 3rd period.  The boys team lost 3-2 at St. Cloud Apollo, but I don’t have details.  The boys basketball team won rather handily at Detroit Lakes – it sounds like they are improving with each game. 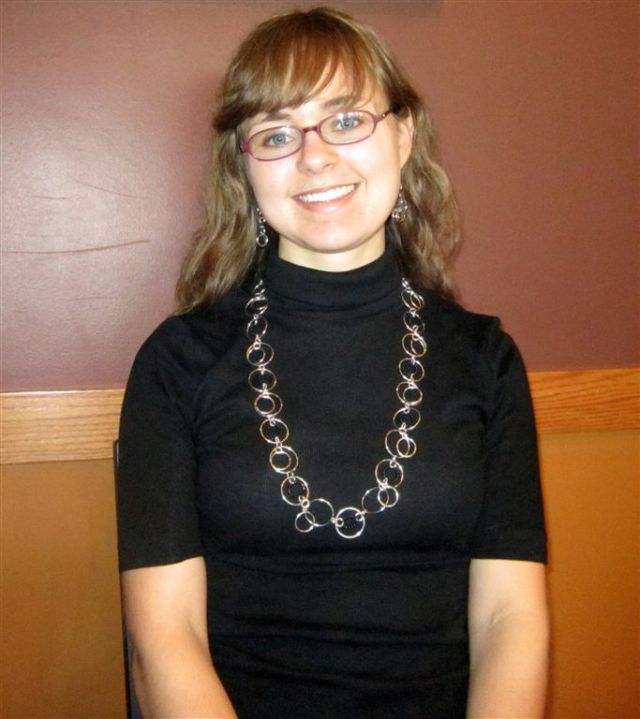 This is Erica Fulghum, Alex class of ’09.  She is a senior at North Central University in Minneapolis where she is majoring in journalism.  She is interested in journalism because she is interested in people – and wants to go all over the world in pursuit of stories that interest her.  She is in Alexandria as an intern with Definitive Women Magazine, and also to help School District 206 with the Alexandria Alumni Magazine.  It was in that latter capacity that she was assigned, for some reason, to interrogate . . . er, interview me.  We met yesterday at Dunn Bros.  Her boss, Jill Johnson, was going to join us to get a “head shot.”  She apparently decided she already had way too many photos of me.  The alumni magazine has a publication date of April 2012.  I took the photo of Erica at Dunn Bros. because I have blogging responsibilites. 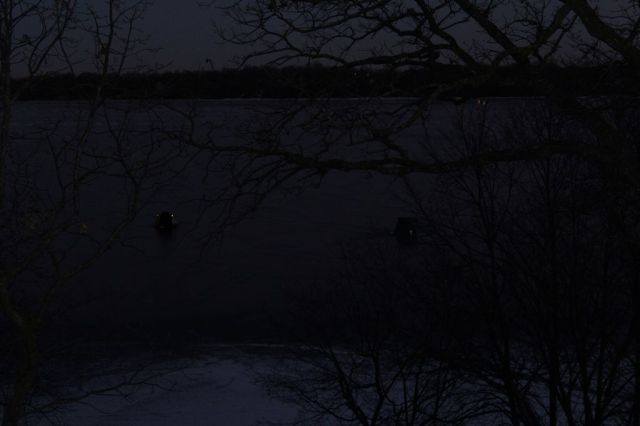 p.s.  No snow – but fish houses out front last night.  Heard from my walking partners this morning:

Both “Weakie” and I were there.  I left home about 7:25, the rain had stopped but it took at least 10 more minutes to get to the Y.  I had driven out to get the paper at 6:10, no rain and roads were fine.  Left the house and slipped and almost fell on the steps.  Just
got home now, roads have been salted and it’s not too bad.  See you tomorrow.  After the time at the Y, no ice on the car. ~ Rock

Wimp.  No, you were smart.  Terrible ice.  Big accident at 4-way stop by Y.  I had a helluva time walking from car to entrance.  I walked on grass as much as possible.  Car was not iced up when I left.  I was lucky when I left that there was a guy putting down salt.  I asked him to put salt down to my car, which he did.  Had a tough time on road to my house.  Car moved all by itself.  Scary.  ~ Weakie