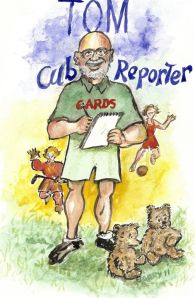 OK, we’re beginning still at Day 2 of the vacation – arriving at camp that evening.  The whole fam damily was there as we gathered on the patio for introductions of staff, and campers, and any one who wondered through the neighborhood.  Then we all went up top – 60-some steps as I recall – to the dwellings and an evening campfire.  For us, Rappaport was home for the week.  It housed The Biddies; Rita’s daughter, Beth, and son-in-law, Chris; Jami and Danny; and me.  The grandson was off on his own in a man-cave!  And what’s camp without some campfire songs? 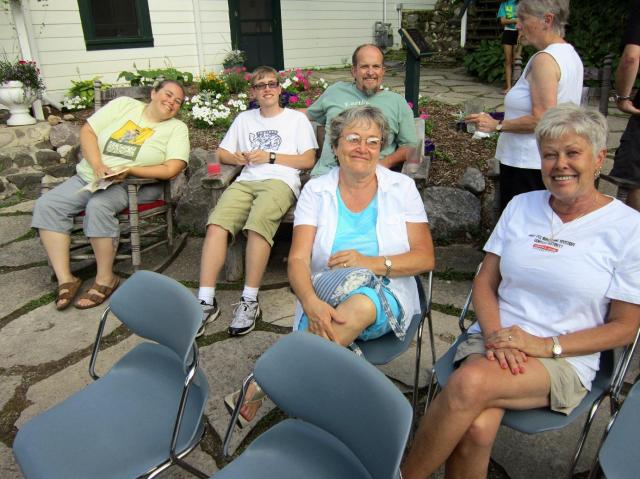 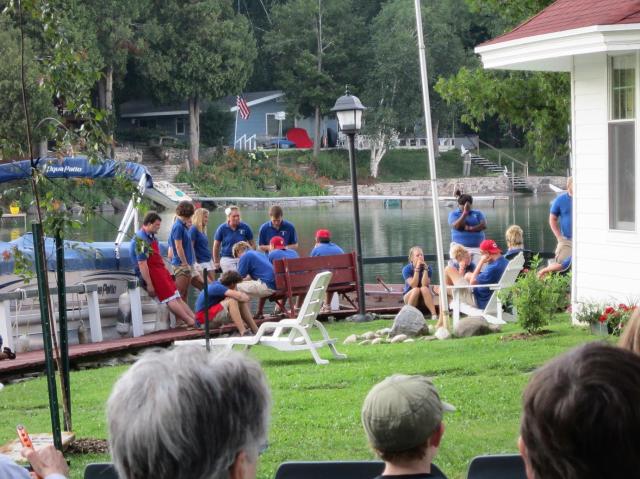 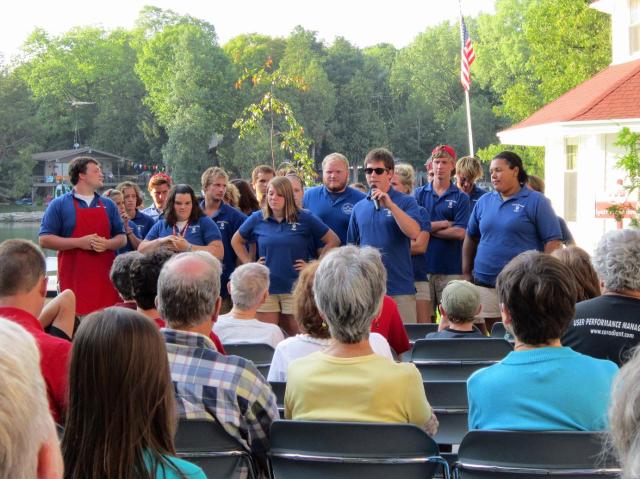 The Biddies belt out “Indiana Our Indiana”:  http://www.youtube.com/watch?v=lMfeBwDiiZ4&feature=related 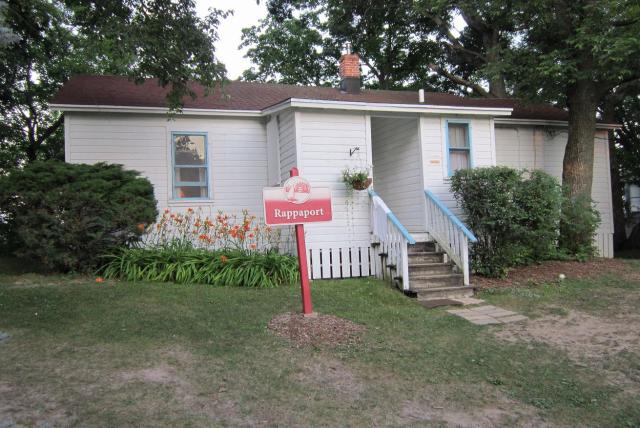 Finally, Day 3.  I hit the jackpot our first morning – it has happened a couple of other times over the years – a perfect marine haze at sunrise for grand photo ops: 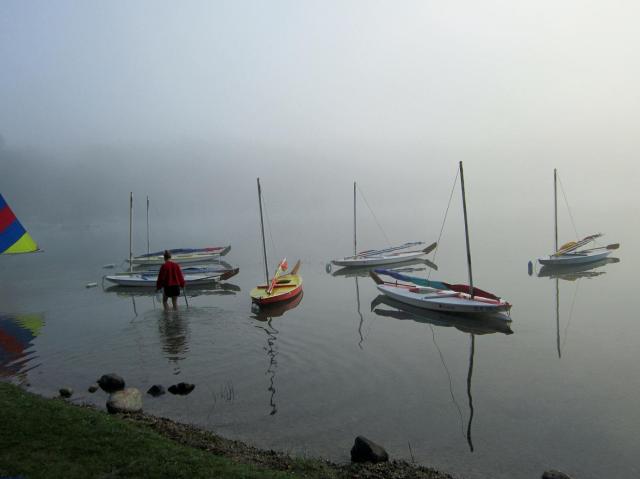 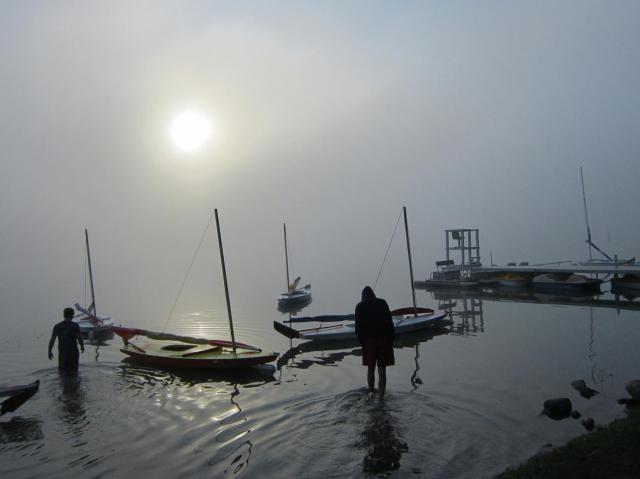 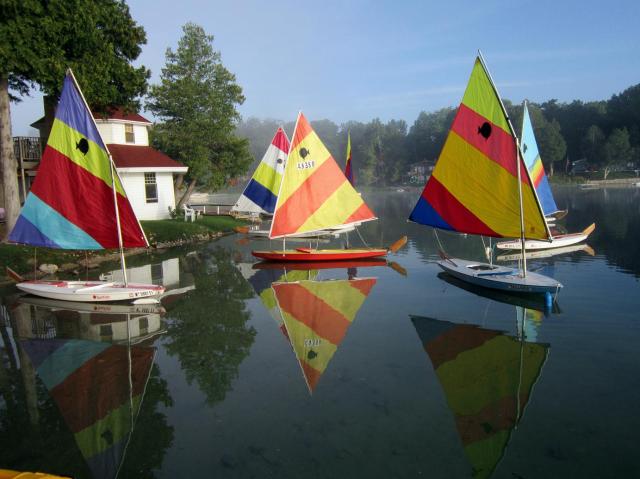 Then The Biddies took the long stairwell down to breakfast where we ran into Tom who had run into Karina – whatta guy! 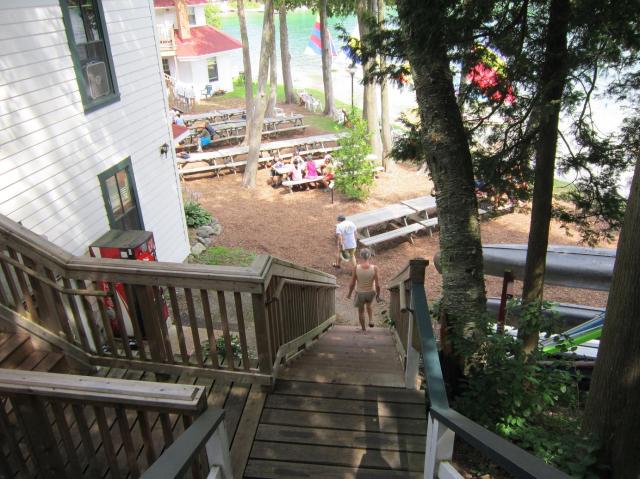 [After a longer than brief sabbatical created by an unusually high number of music events in the immediate viewing area, we return to the scene of summer vacation.  It is now September 3 – when last we left you Tommy was noshing with Karina . . .]

Our first full day at camp was Night Out in Elkhart Lake – the usual Biddies were joined by honorary Biddie, Cindy, for the festivities: 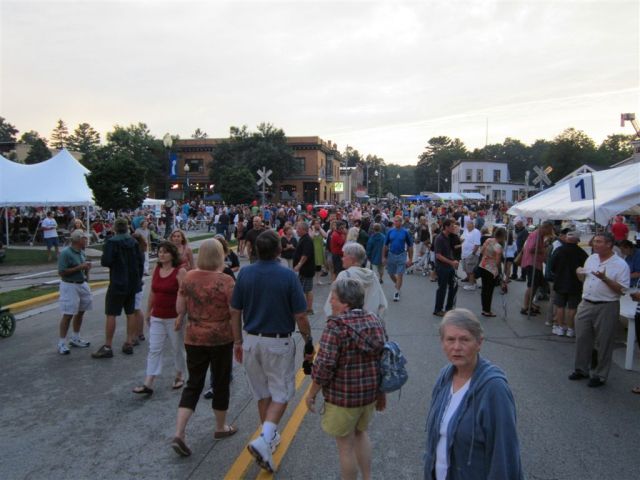 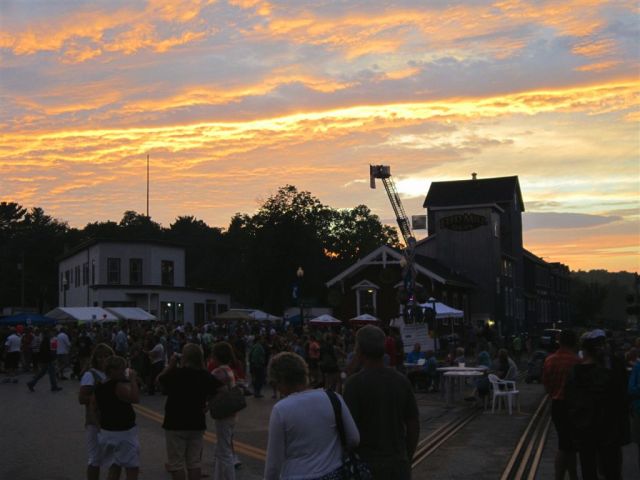 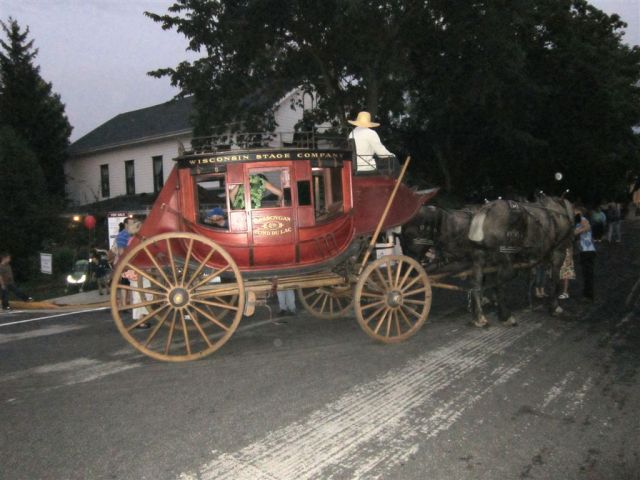 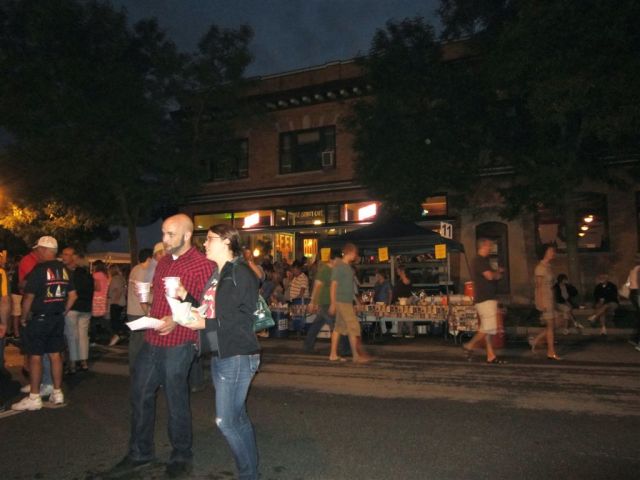 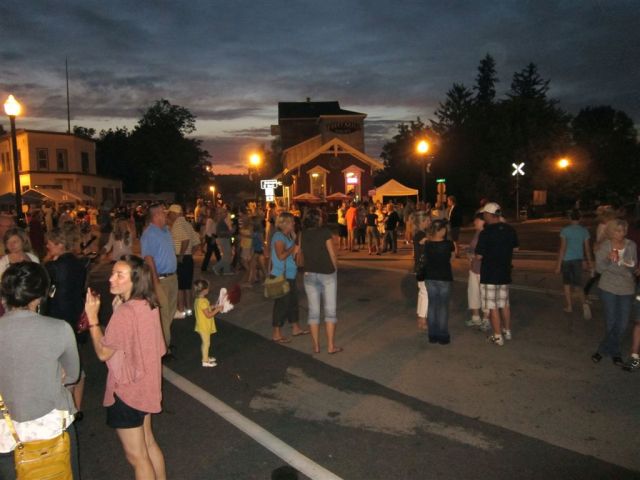 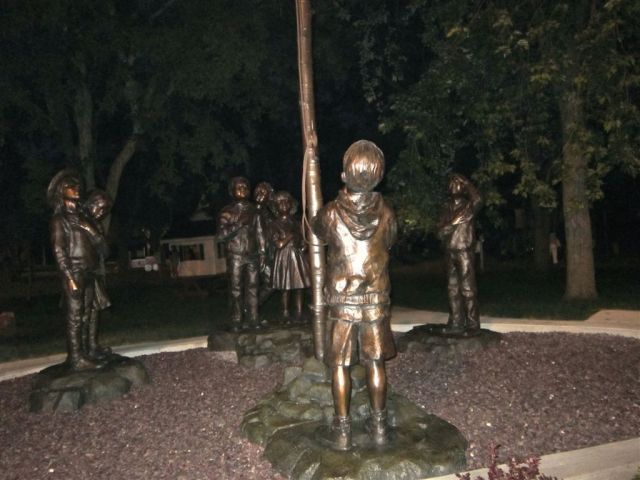 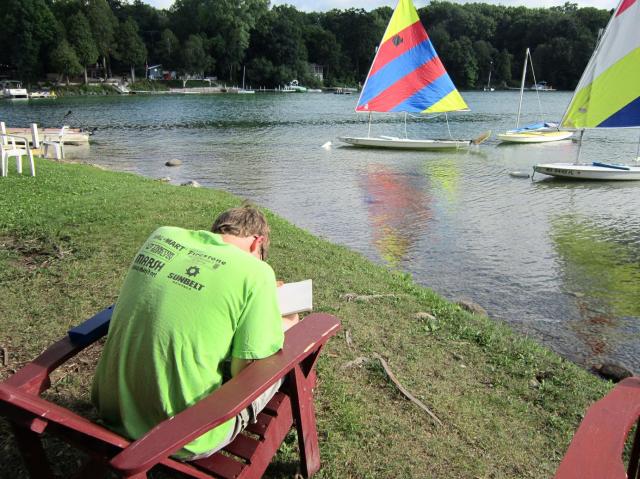 [Tom drawing at water’s edge.  We suspect the subject matter was the sailboats.  However, a certain someone (who shall remain nameless) commented, “I never saw a guy looking so close at a page that didn’t have a naked woman on it! ; )  (Don’t tell Ruthie I said that!)  Very, very cute couple!”]

[The lakeside hugging bench – now all you have to do is find a huggee!] 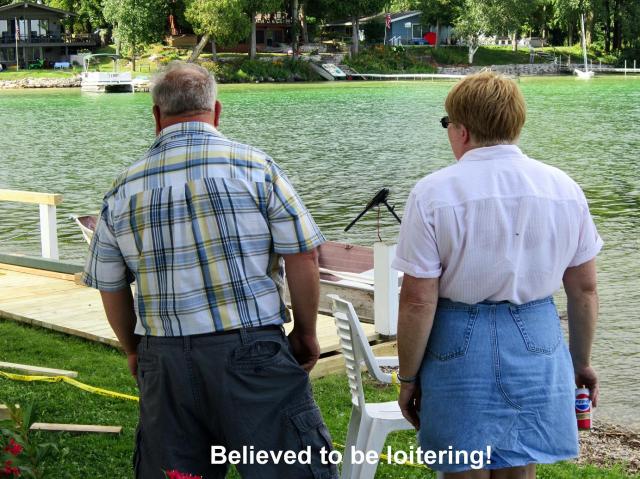 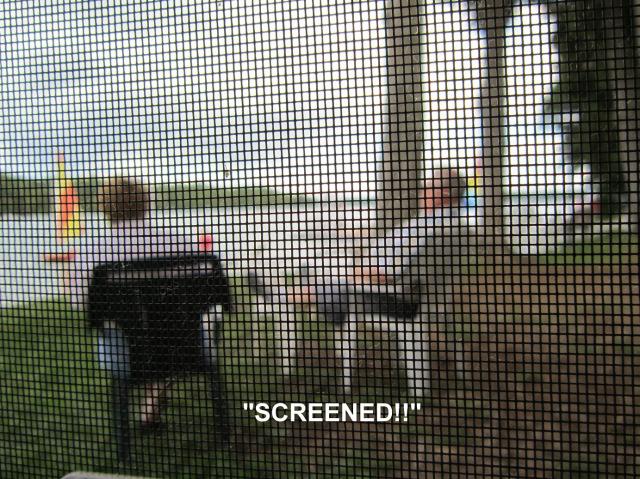 [Campers from Fort Wayne, Vickie & Scott, who have also been to Vacationland USA.] 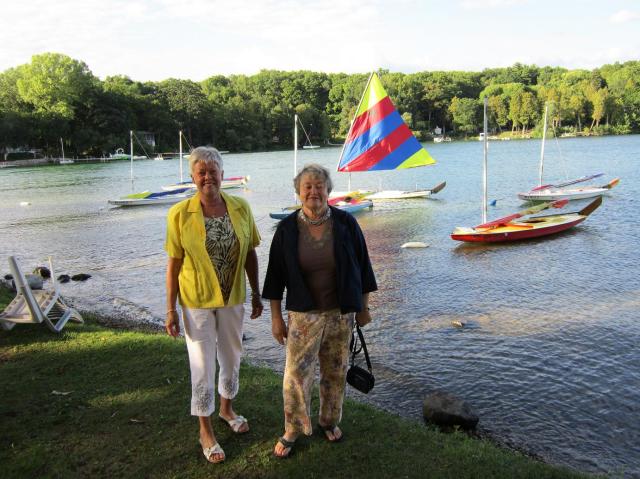 [The Biddies “dressed” for dinner that night (as we all did).]

Then an after dinner stroll around the camp lakeshore: 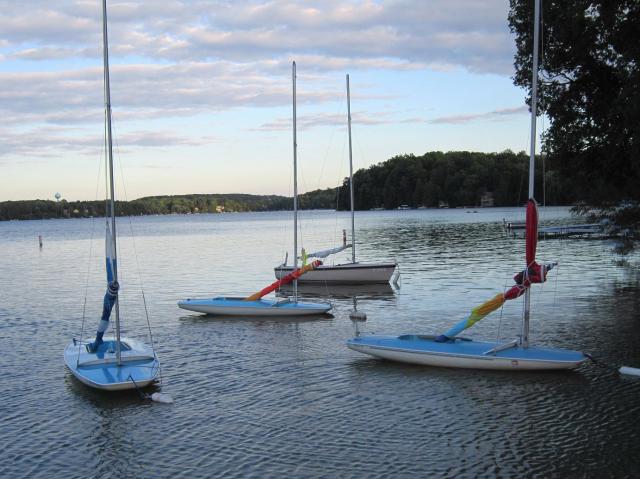 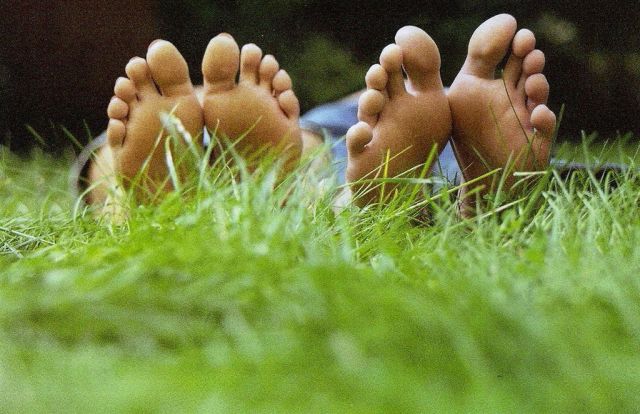