The 4th (the aftermath)

As with the 4th report, we will start this episode with the most recent event and work our way back.  The reason for this, of course, is Ms. Sami Steidl.

The supervisor and I became groupies of the local music scene about the time Sami started playing with everybody – when she was 11 years old!  Now she is, as we say in the middling part of America, “all growed up!”  She graduated from high school this spring and will be enrolling at the University of Colorado in the fall – to continue her education in the viola.

Her playing partners through the years decided she needed a proper send off from the locals – and thus was SAM-A-RAMA created.  Held Sunday, the 10th, at the Phoenix Events Center, The Biddies and I were in attendance, having sent the kids back to Indiana that morning.  I had a feeling I would be taking a lot of videos and wondered about my memory capacity (mine, and the camera’s!).  Sure enough, I ran out at “half-time” and was not able to record anything with Cassie and the Bobs.

Sami played with, among others ( I have likely forgotten), her high school buds; Spencer Christensen, Ben Stoeck, et al; Terry Kennedy (who wrote and performed the baby song), whom she played with at nursing homes (they said they could put the residents to sleep without medication); Skilly & Duff (Mikko Cowdery, Bruce Kelly (the emcee), and Annie O’Flynn); Sax Appeal (Chuck Wencl & daugher Michelle); The Salty Dogs (Erik Schultz, Tom Mulder, and Bruce and Annie); and . . . well, here are six videos from the event: 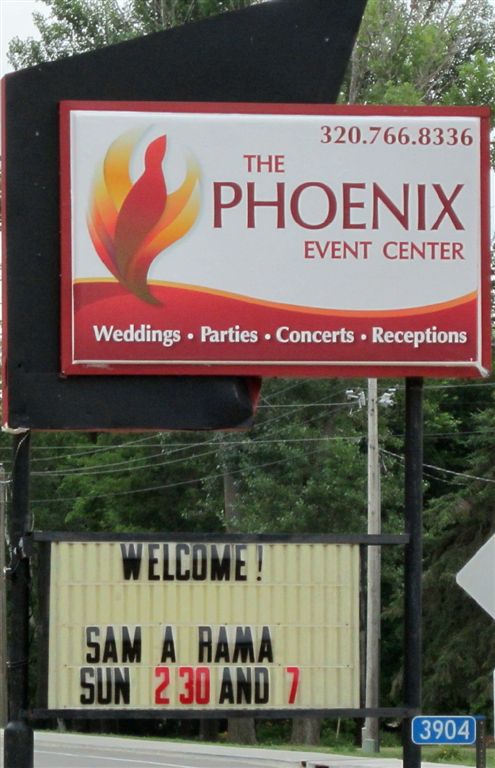 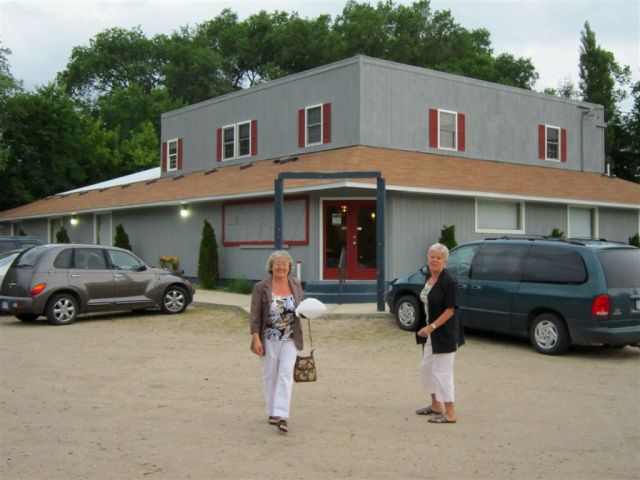 [The Biddies and I arrived a little early – a storm was on the way.  When we left 2 1/2 hours later, we could tell it had rained hard.  We did not find out until the following morning that 70-80 mph winds had hit Central Minnesota causing much damage throughout the area.] 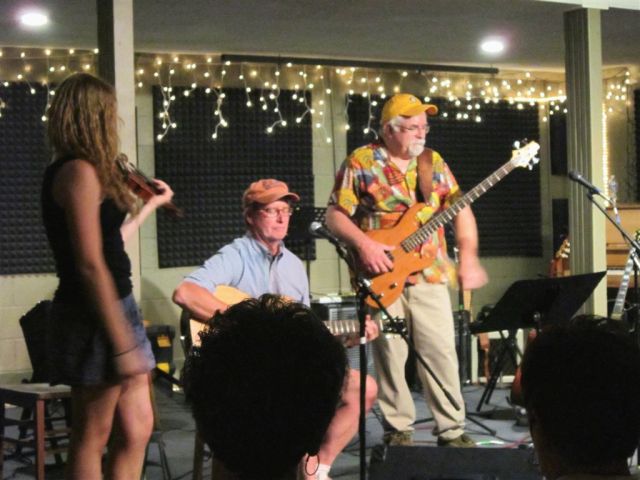 [Sami performing in her signature barefeet!]

And a couple from the archives: 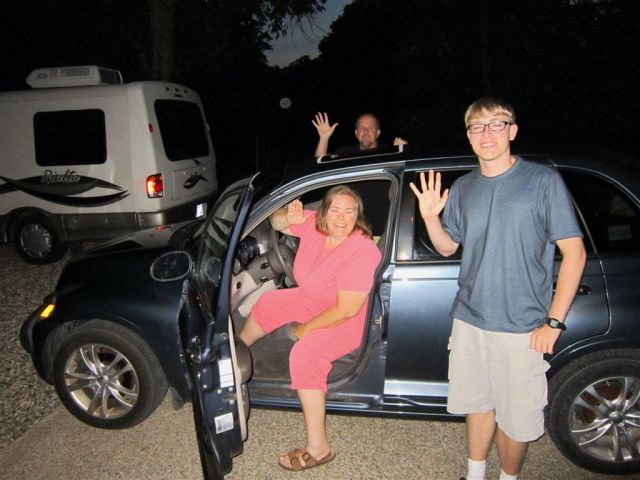 but they left some memories. 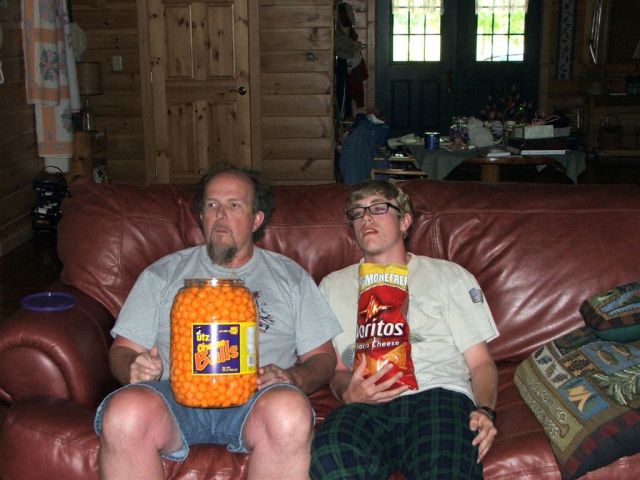 [Father/son bonding in front of the tube.]

[The grandson received a stipend from the supervisor for this; Mr. Maintenance does not!]

The day before they left, we all went on a road trip to . . . Fergus Falls (well, to the Prairie Center Learning Center, actually) – with stops along the way at the Quilt Shop in Garfield and the Evansville Art Center (the smallest member of the Smithsonian): 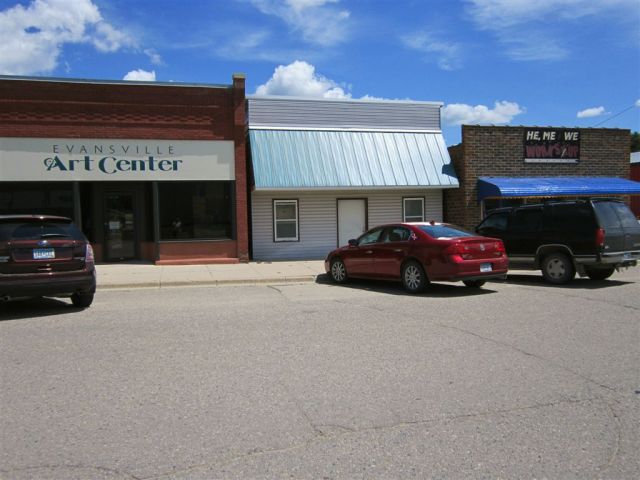 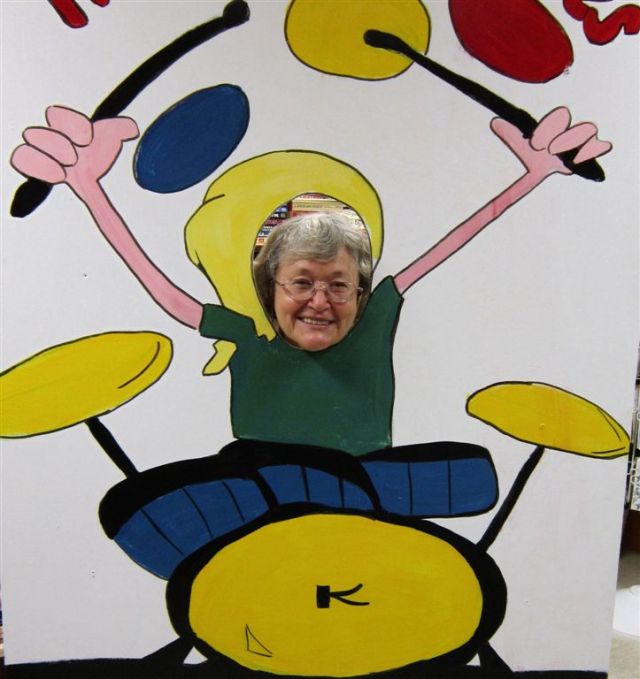 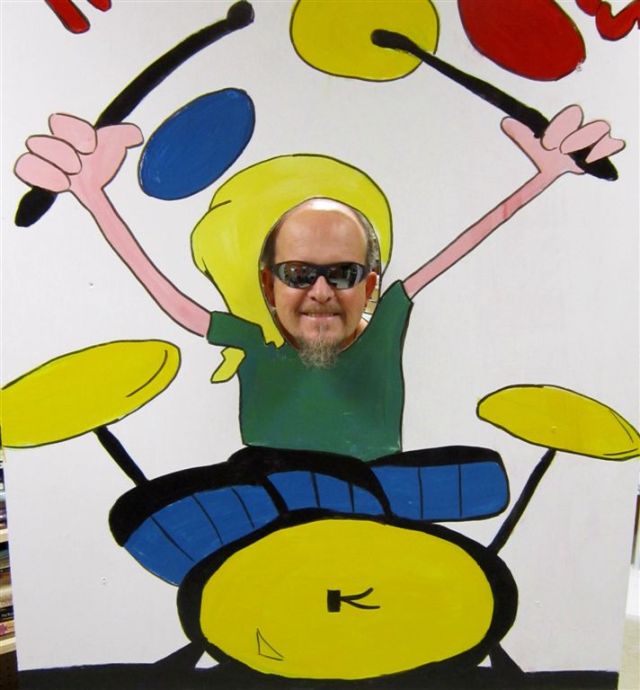 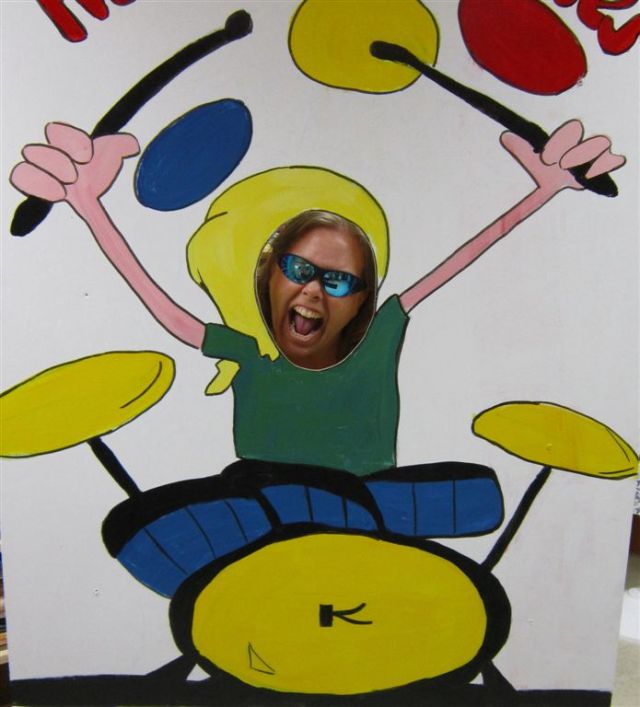 And some photos there by Danny: 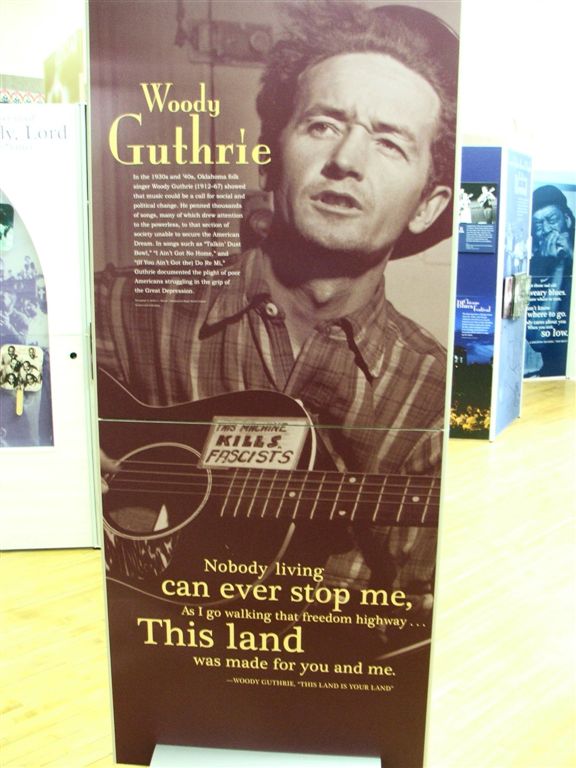 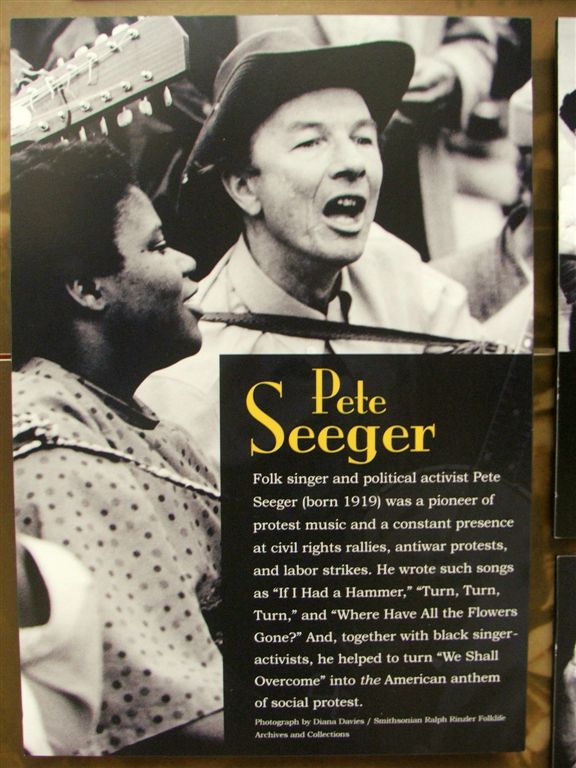 Then it was on to Fergus, where we lunched at Cafe 116 – the waitress remembered Ruthie’s women’s group visit there a while back:

[Rita with the founder of Fergus Falls.]

[The kids in downtown Fergus.]

Then it was on to Otter Park and the egret rookery.  The Otter is the high school mascot for Fergus – and Ruthie and Rita both went to Otter Creek school in Terre Haute, Indiana.  The egret photos are by Danny: 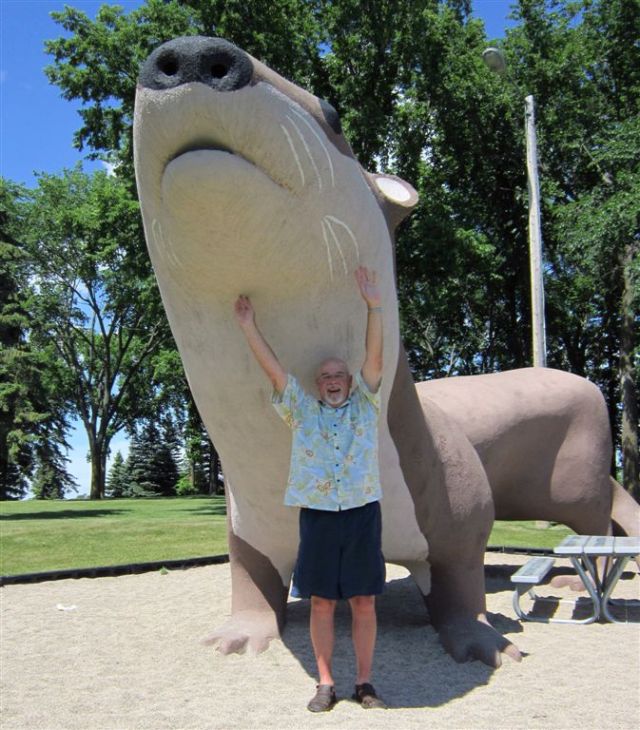 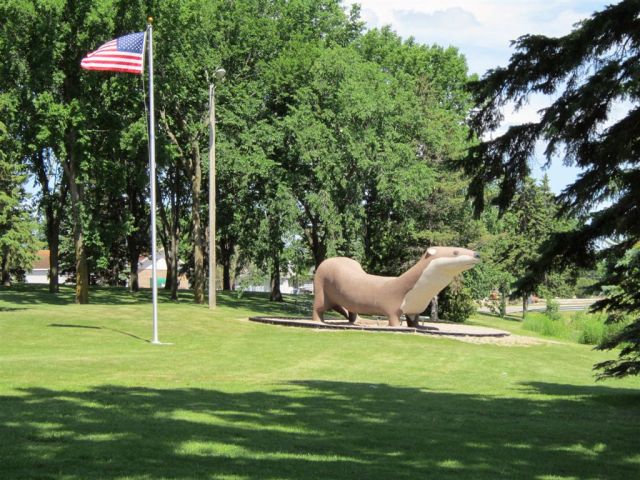 Then it was on to the U.S. Fish and Wildlife Service Prairie Wetlands Learning Center: 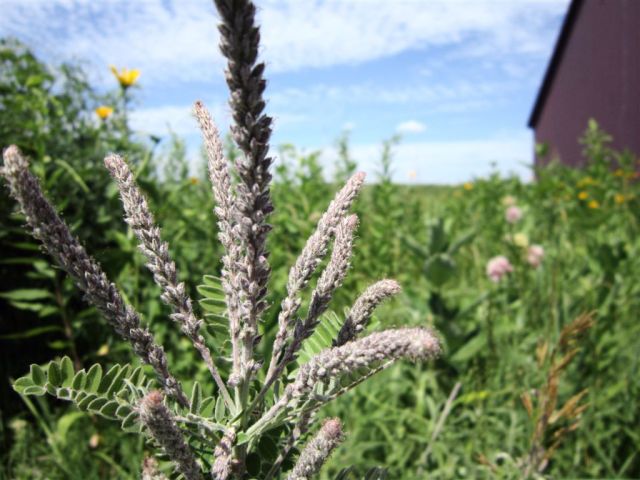 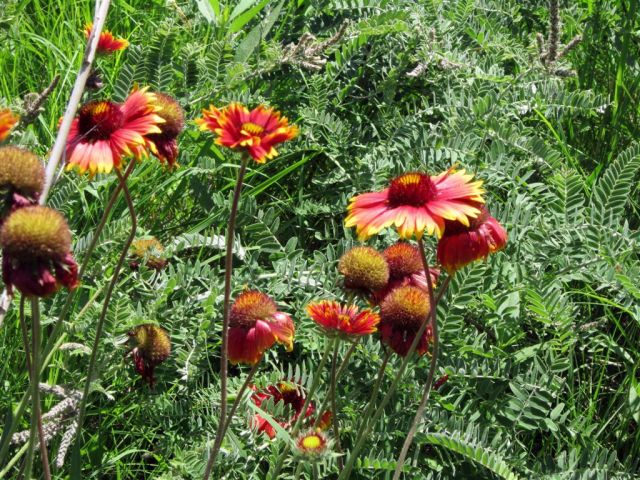 The girls had listened to our Lisa Lynn CD all week and were looking forward to seeing her at SAWA on Thursday night.  Jami and Rita bought a CD from her, and Lisa autographed them. 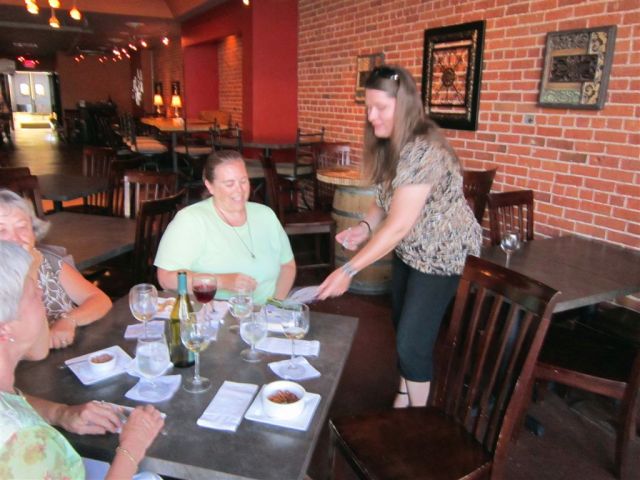 The two videos of Lisa were mindful of the scene in Annie Hall after Diane Keaton’s nightclub singing debut:

Walking along on the sidewalk afterwards, Alvy attempts to make her feel better, encouraging her as an older mentor: “The audience was a tad restless…You have a wonderful voice.” Suddenly he stops and asks for a kiss so they won’t have to be tense all evening.

The usual crowd was there that night as well as 21 young ladies enjoying a bachelorette party – the audience was indeed a tad restless.

Ultimately, The Biddies left me too.  They were off to Indiana by way of Grand Marais: 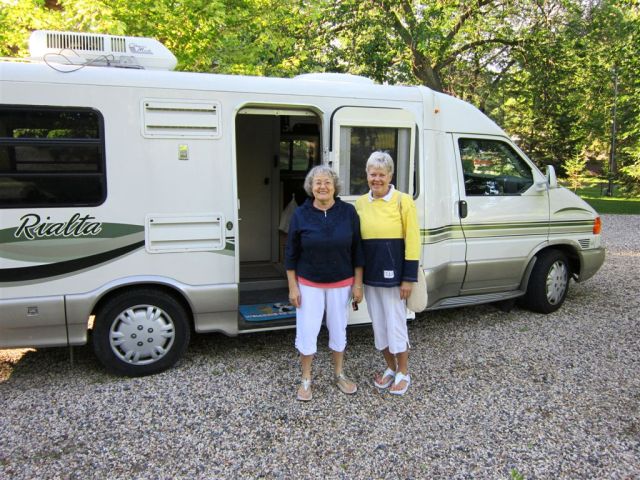 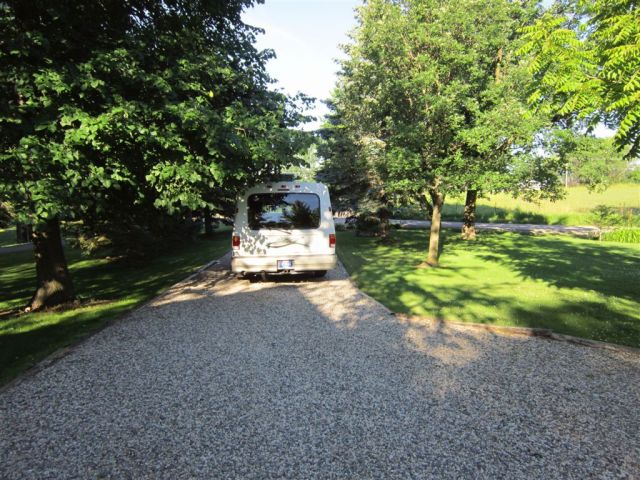 Finally (yeah, I know), I “discovered” the following photos in Rita’s camera from a year and a half ago.  Parents should use these as a warning to their children about the hazards of overdosing on M&M Peanuts! 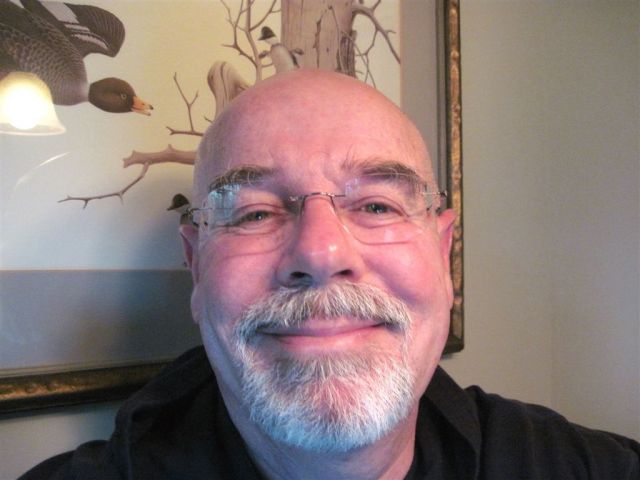 So, until “we look you up again” next time, we bid adieu.