The team that makes the most shots wins. – Cub Reporter

[Thank you, ladies, for a terrific season!]

The 2011 Minnesota girls state basketball semi-finals – our Cards v. the No. 1-ranked and undefeated Hill-Murray Pioneers. We found it telling that of the four teams in the “final four” in Class AAA, our Cards were the only team that wasn’t a metro-area private school (the other two teams were De La Salle and Benilde-St. Margaret). So, we are the state public schools champions! We also found it telling that Irondale Cam, the “Troglodyte” who doesn’t much care for girls’ sports (despite having a gymnast daughter), deigned to make an appearance at Target Center with us. Will wonders never cease? 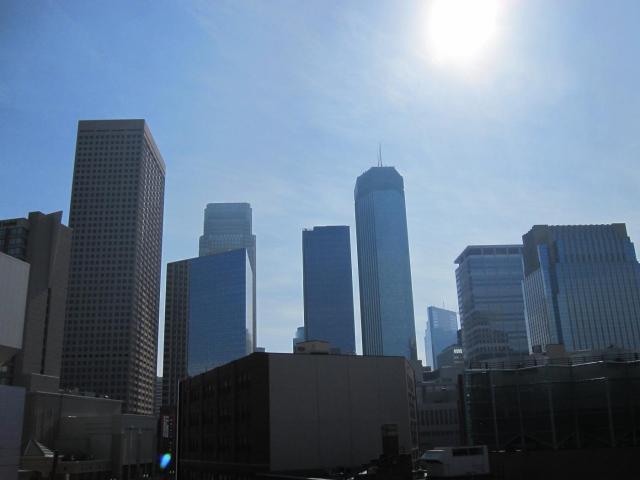 [Wending our way to Target Center, past Target Field, to George Mikan.]

We had seen Hill-Murray play a half of their first round game. On behalf of the Cards, I was not intimidated – I thought we had the better athletes. The beginning of the game proved my point. The “Troglodyte” could not believe the Pioneers could be the No. 1 team in the state – he kept saying, “They’re awful.” I had to keep reminding him the Card defense makes everyone look awful. The Cards raced out to 17 – 12 lead, with Lauren leading the charge with 10 early points. The Cards did indeed look like the quicker, faster team. Then, reflecting our out-state paranoia, we’re sure word came down from “on high” that the No. 1-seed must make the championship game! Lauren was hit with a 2nd foul call – and sat out the rest of the half, over 10 minutes. That changed the entire complexion of the game. The Pioneers went on a 16–0 streak – the Cards became tentative and began missing open lay-ups. We somehow closed it to 28-20 at the half – we were confident we would win with our usual 2nd-half run.

[The supervisor claims our seats!]

[We hope the staff photographer gets lots of good photos!]

The 2nd half opened with Lauren back in the line up. We immediately hit her on a beautiful back-door cut – but she missed the wide-open lay-up. I think that may have been the key play in the game – the Cards seemed to realize it too. The Pioneers had found their shooting touch – they had a player who seemed to hit every “3” she shot, a 6’4” center who was automatic inside, and an All-Metro big guard; the latter two will play D-1 basketball. The Cards could not afford to miss the bunnies – but they consistently did all game. Halfway through the second half, as the Pioneers were stretching their lead, the “Troglodyte” noted that if you didn’t look at the scoreboard you would think the Cardinals were winning – they just “seemed” to be the better team. He also noted we were wearing them out with our pressure – in a regular season game that may have been telling. But in this game, there were too many whistles and too many TV time-outs – rest time for a tired team. And, to their credit, the Pioneers made their shots – and the Cards didn’t. That ultimately created a weariness and sense of inevitability on the Cards – the final big margin, 68 – 41, was unfortunately terribly misleading.

[It was St. Paddy’s Day.  The “Troglodyte” took us on a tour.  The supervisor with Sid!]

[A power hitter and a singles hitter.]

[Calvin and the “Troglodyte.”]

Yesterday, while I was washing the Minnesota winter off the car in Terre Haute, the Cards played the No. 2-seeded team (and defending state champions), Benilde-St. Margaret, for 3rd place at Concordia College. The game sounded in many ways similar to the Hill-Murray game, except this time the Cards stormed back. After trailing 33 – 21 at the half, the Cards closed to a final margin of 54 – 51 – they had several opportunities to win down the stretch but couldn’t quite do it. The stats were probably similar to the previous game – Benilde shot 60% from the field to the Cards’ 38%. But we turned them over 28 times giving us more opportunities. Apparently we missed a lot of bunnies as in the Hill-Murray game. De La Salle, who beat Benilde 54 – 45 in the semis, beat undefeated Hill-Murray by 20 for the championship. Based on comparative scores, on a good shooting night, the Cards had the ability to play with any of them.

So now we say good-bye to a terrific team – and thank them for a fun and exciting 25-5 season. Since we all presumed last year’s team was “the” team, I think we snuck up on a lot of people this year. Best wishes to our senior front line – Sam, Joie, and Alli – as they all matriculate to higher levels next year – and to fellow seniors, Lauren J, Brie, and Mo. They are all irreplaceable, of course – but like last year, you just never know. We have a good core coming back again next year in Lauren T, Cara, Whitney, and Amanda. Fergus and Sartell will be section favorites next year . . . but you just never know!