We’re Off to the Granite City

Oy! (Thus proving I do not understand Minnesota, preferring the monosyllabic “oy” to its local equivalent “uffda,” because it is a space saver except when one employs a long parenthetical explanatory narrative.) Joyce Rogosheske is a leading proponent of the old axiom: It’s hard to beat a team three times in one season! Last night it gave us pause, for a while.

The Cards came out logy last night – possibly as a result of nervousness over the first tournament game, or . . . because their record is 22-3 (15-3 in conference) while Rocori is 4-23 (3-15 in conference), and the Cards won both regular season games by a total of 46 points! Alex usually jumps on a team like Rocori from the outset and bounds out to an early lead. They couldn’t shake the pesky Spartans for most of the first half. Then, as the half wore down, the Cards opened up some breathing room and carried a 29 – 13 lead into the lockerroom. I’m sure they felt they finally had the game in hand.

Then the 2nd half began. The Spartans began throwing up three-pointers that deflected off the rafters, ricocheted off low-flying birds in the arena, and dropped into the hoop; made falling down, awkward, contested shots inside – while the Cards were missing everything they threw up (I don’t think we made a three all night). About 6 minutes into the half the Cards were clinging to a precarious 35 – 30 lead. [Editor’s aside here on the Rogosheske axiom: The Little Falls boys hockey team was the No. 1 tournament seed with a 20-4-2 (12-2-1 in conference) record and St. Cloud Apollo was 6-19-1 (2-14-1 in conference) – and Little Falls won both regular season games by a total of 9 goals. Apollo won the opening round of the tournament, 3 – 1, despite being outshot 48 – 29 by the Flyers. Our Cardinals then beat the Eagles, 4 – 0, in the section semi-finals and will meet Willmar for the section title tomorrow night.]

Then the Trumm sisters decided we’ve had enough! In about the next 4 minutes, the Cards went on a 27 – 4 run. Sam and Lauren turned on the turbo-chargers and were suddenly making plays all over the court – looking twice as quick and twice as fast as anyone on the court. Lauren was flying in for fast break lay-ups. They started feeding Sam in the post and she scored 10 straight points. Sam is right-handed (and with that hand swished about 6 free throws in a row) but she prefers shooting with her left inside. We chuckled one time when she made a quick interior move to her right, had an uncontested lay-up, and banked it completely over the basket. From then on she always went left, could have told the Spartans she was going left, and still spun so fast she was banking in leftie after leftie, one time from about 8-feet out. At the completion of that run, everybody got playing time. The final score was 65 – 39. Depending on your source, Sam either had 29 (KXRA), 27 (my last notice on the scoreboard), or 25 (St. Cloud Times) points and Lauren had 17. 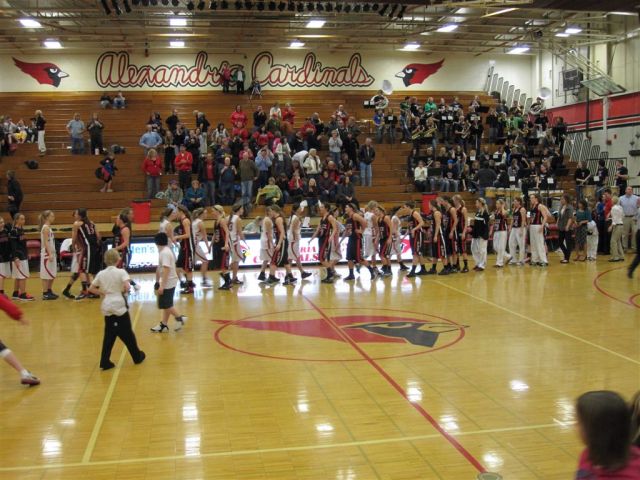 The Cards (No. 2 seed) now play Sartell (No. 3 seed), a 57 – 44 winner over Apollo, in the section semi-finals at St. Cloud State @ 3:00 on Saturday (the teams split during thr regular season). The other semi features Fergus Falls (No. 1 seed) against Detroit Lakes.(No. 4 seed) @ 1:00 – these teams also split during the regular season, with DL winning the last game, so Fergus is not a lock.

In preparation for the Florida trip, the supervisor was sunbathing on a snow-covered deck lounge the previous day – it was a sunny, balmy 20-something. Last night at game time, the wind chill was 20 below zero – again! Even Ruthie thought that was getting to be a bit much!

[Photos will be added later as posted by the staff photographer.]