The Greatest Game Ever Played

[From the archives, February 17, 2006, and with apologies to the semi-final and championship games of 2008, and reprinted without permission from the Class of ’65 blog site (following, which, incidentally, is a good resource for all things Alexandria)]:

WHAT A NIGHT!  (Or how the cub reporter learned, at the age of 58, he can still jump (though, granted, not very high)).

Approximately half way through the SECOND overtime last night, Sara Toft, who with twin sister Andrea was also celebrating her 18th birthday, scored the winning goal to beat Totino-Grace, 3 – 2, to win the section 2, class A, girls hockey championship at the MAC in St. Cloud. The Cardinals will now make their 3rd consecutive appearance in the state tournament at the Xcel Center next weekend (I believe their games will be Friday and Saturday).

The setup: All week long, Cardinal sports announcer Dave Harris had been creating unnecessary angst for cub reporter-in-training Bob Annen by telling him Totino was awesome. They had two college division 1 prospects – a tall, fast center who proved to be every bit as good as advertised, and a defenseman who appeared to be about 6’9″ and who never came off the ice. Of course, all this fed the pre-conceived notions of we outstate Minnesotans that the camel hair coat, cashmere sweater metro-area private schools (description by cub reporter-in-training and past Honeywell executive, though the cub reporter himself will admit to a similar bias) “employ” mercenaries on all their athletic teams against our home-grown, pinked-cheeked, apple pie and lemonade kids.

Nevertheless, the omens all week appeared to be good. Our girls basketball team won on a night the Alexandria Aces performed at halftime, the boys swimming and diving team completed an undefeated season with the conference championship, our boys basketball team beat Rocori (the No. 2 ranked team in the state) and won again Thursday, and our boys hockey team won at St. Cloud Tech (no minor accomplishment). This cub reporter felt good about our prospects.

On the advice of Mr. Harris, our caravan departed for the game wearing the same attire as had been worn for the semi-final game and with the idea of obtaining the same seats (which we did).

The moms told us before the game that the girls were very nervous – trying to get back to the state tournament for the 11 seniors with their best team. Probably because of that nervousness, they seemed very tight through most of the first period and were probably lucky to escape that period with a scoreless tie.

The pace picked up in the second period and Alex emerged with a 2 – 1 lead, with goals by one of the Toft sisters and Ashley Holmes, heading into the final period. The Cards maintained that lead well into the third period when they were hit with a “frivolous” (that isn’t the word we used at the time, but this is family friendly blog site) too many men on the ice penalty. Totino took advantage of that power play to score the tying goal. Nevertheless, throughout the game and the two overtime periods, sophomore Danielle Justice was spectacular in goal.

The first overtime, and then the second, exhausted players and spectators alike.   [Annen noted that even Abby Williams was sitting between shifts.  The only other time we had seen that was in game where she played sick.]  When Sara finally scored the winning goal, bedlam broke out on the ice and in the stands. The cub reporter, in a total failure at maintaining professional dignity, found himself jumping up and down with and hugging classmate Bud Bruzek, and high-fiving parents all around. The girls on the ice collapsed in the corner in a pile of jubilation and tears. The cub reporter regrouped to try to capture as much of this as he could on film.

[Right after the game – Ruthie, in spite of her Hoosier basketball genes, has become quite the fan, and with Vivian, does all the cheers and belts out the Cardinal fight song.] 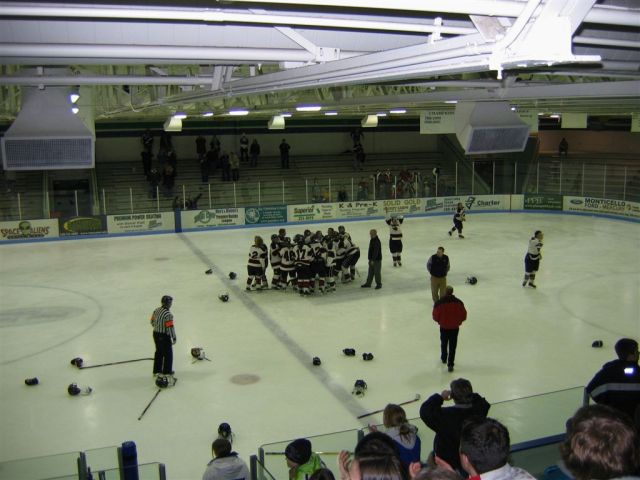 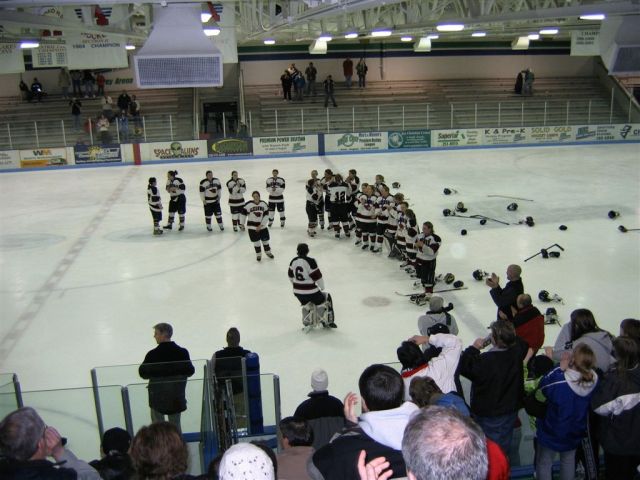 We returned to Alex driven by the cub reporter-in-training, who initially thought it would be a grand idea (well, all of us did), to follow the Alex buses home. The buses got lost somewhere in a St. Cloud subdivision, but we eventually found our way home by midnight. The cub reporter and Ruthie were dropped at Mom Obert’s to pick up their car where we discovered the following note stuck on the windshield by Mom: “What a game! Go Cardinals!  I guess the refs were terrible, but WE WON!” Apparently Mr. Harris was expressing some exasperation about the officiating over the air (probably something to do with our paranoia over metro-area favoritism). Abby William’s mom told us during the game that she was going to write a letter to someone in authority – she was quite upset that Abby was tripped, tackled, and otherwise maimed throughout the game without any penalities being called. But . . . we won and will move on.

[“Baby Bruiser” at the state tournament a week later.]